The Minecraft meets Dragon Quest series goes bigger with its second installment, but is it for the best? 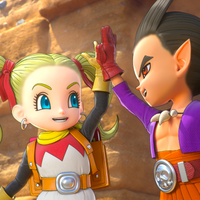 When I told a friend that Dragon Quest Builders 2 was one of the games I was most looking forward to this summer, he asked me if I was a Minecraft fan or a Dragon Quest fan. Surprisingly, I answered neither. I played Minecraft back in its early beta days and enjoyed the freedom, but the lack of formal structure left me wanting more to do. I decided to leave the game to those who would happily reconstruct the Great Pyramid of their own volition. Dragon Quest had the opposite problem. Having missed the earlier titles, I never developed the fond nostalgia for what seemed to be fairly rigid, if charismatic, JRPG dungeon crawlers. But when freedom of Minecraft is combined with the structure and goals of a Dragon Quest? There's an incentive structure I can get behind! 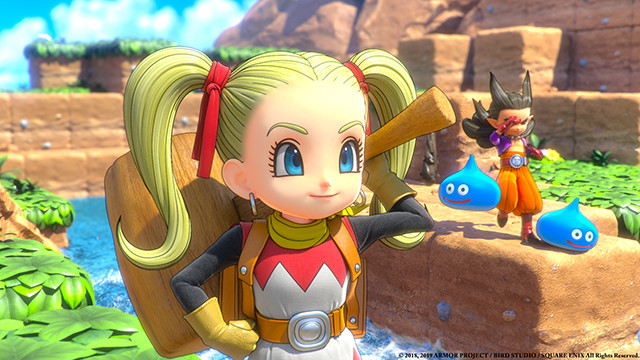 What Dragon Quest Builders really reminds me of is the long vanished "restore the world" JRPG genre that Enix specialized in with titles like ActRaiser, Soul Blazer, and TerraNigma. In these games, you usually played an emissary of God tasked with restoring life to a blasted wasteland filled with demons. Nothing quite matches the power trip of turning a poisoned wasteland into fertile fields and building a thriving community where death once reigned. Dark Cloud and Dark Cloud 2 were the last of the genre, which seemed all but dead until Dragon Quest Builders came to revive it in 2016.

Where the first Builders based itself off of the first Dragon Quest, with its setting of Alefgard and great enemy the Dragonlord, Builders 2 references the second Dragon Quest. Here the foes are the evil cult the Children of Hargon, who despise builders and forbid anyone from improving their lot in life. Also making an appearance from the classic title is NPC Malroth, who assists the main character in their journey. As with the first game, at no point does knowing the Dragon Quest lore become necessary to enjoy the adventure. Fans however will have plenty of in-jokes to appreciate and some foreshadowing of the direction the story will take. 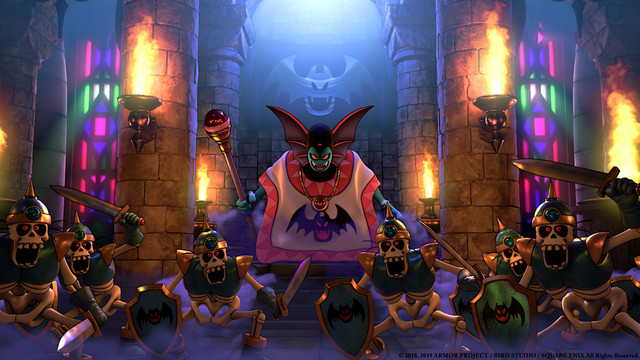 Development duties for Dragon Quest Builders 2 was handed off to Omega Force of Dynasty Warriors fame, and quite fitting, as as the game progresses a ton of characters and action is happening onscreen. The name of the game for Builders 2 seems to be teamwork. Builders was often a solitary affair, with the hero traveling from stage to stage in a  linear fashion, sometimes making allies they would leave behind to continue in their quest. Builders 2 takes a page from the open world playbook, with a hub world called the Isle of Awakening and three other major islands from which to recruit villagers and building materials. The first Builders had some artifice in its world construction, as portals warped you to stages within stages. It felt very much like a game, but there was always something interesting to do. Builders 2 makes the tradeoff to make the world feel more authentically real, but with most open world games, there's an awful lot of space between points of interest. A lot will come down to player preference.

Like, for instance, the first game you're given a giant hammer for brute work and gloves for finer work. With the hammer, you can bash up rocks, items, and trees into raw materials. Gloves allow you to pick up and put down individual blocks. Material blocks when set down build walls, and when you enclose a space with a wall two blocks high and a door, you create a room. With crafting stations you can create furniture and accessories, creating specific rooms to your villagers' or your own personal preferences. When you start out on an island, most resource collection, crafting, and building from blueprints is a solo effort. A lot has been streamlined and improved this time around, with blocks and items specially marked if they're needed for a quest, to prevent having to check the quest requirements for a specific building over and over again. Additionally, you're given more inventory storage space early on, meaning you're never at the mercy of having to build chests like the first game. As you complete quests, you get hearts of happiness from the villagers which allow you to level up the town itself. As the level increases, villagers will gather resources, cook, maintain the village, and take care of a lot of the tedious busywork. I never had to go on fetch quests for specific ingredients or rebuild the village after an enemy attack after I had showed the villagers how to do it themselves. 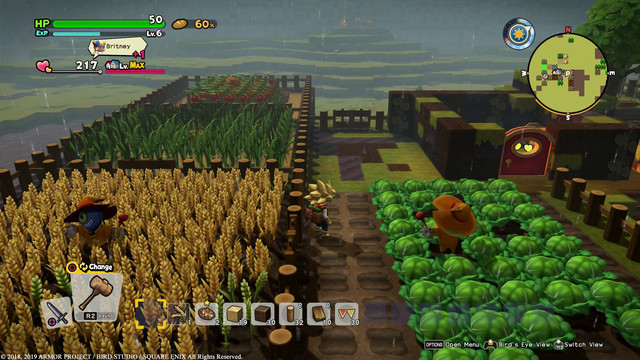 You can also sail to smaller Fortune Islands where you play a scavenger hunt for plants, materials, and animals for a great reward: Infinite resources of a specific type. Early on I traveled to one of these randomly generated islands for a story quest, but stuck around and searched the island thoroughly for the reward of infinite wood. For the rest of the game, I never had to put my construction plans on hold to go chop down yet another tree. Having all of the minor busywork automated away once it no longer presented an interesting or novel challenge was a wonderful upgrade and made the process of creating these towns much more rewarding.

One problem that does emerge from this is that near the end of a island's story quest, there is usually an incredibly elaborate building that is constructed with all of the villagers' help. Supermassive, with three floors and over 500 blocks per floor, these projects are not ones you'd want to complete on your own. While you often have missions of your own to complete while the villagers work, you can end up having to wait for the villagers to complete their task. Still, it's a minor nuisance, especially compared to a similar issue with combat. 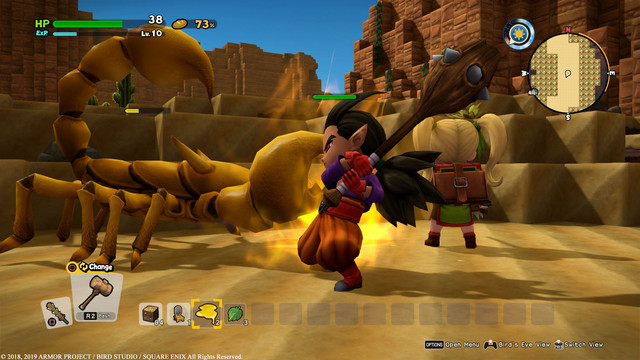 Combat has never been Dragon Quest Builders' big draw. The boss battles are fun, but routine combat involves one or two kinds of attacks at best, running away to dodge, and smart use of healing items. In the first Builders, you were often the strongest member of your party due to your ability to craft weapons and armor, and a few NPCs lent a helping hand. Here, you are second best. Your game companion, Malroth, blessed with the powers of destruction, is a much stronger fighter than you. While you, being a creative builder, have a powerful ally of destruction is fun for the story, it doesn't add much to the gameplay. When it works out, it can be convenient to have Malroth take care of persistent mobs for you, or to deliver finishing blows to weakened enemies. When it goes badly, and you have no healing items, you can run around waiting for Malroth to defeat your enemies. Fixes to this would have been reducing the incidence of combat overall, or letting you control Malroth in high stakes combat situations. Playing second fiddle is just no fun.

The tower defense segments are slightly better, as there you have a group of villagers fighting a group of enemies. Battles are often lost or won ahead of time by making sure your villagers are equipped with the best weapons. You can play a supporting role by carrying wounded villagers back to a bed to rest, but your inventory of offensive building projects like spikes or flame-breathing gargoyles have been reduced from the first game. Again, if a fight goes wrong, you can end up waiting for your allies, especially Malroth to carry the day. I died a lot less in combat in Builders 2 than I did in the first game, but I also can't say I enjoyed battling outside the boss battles, where you always play a central role. 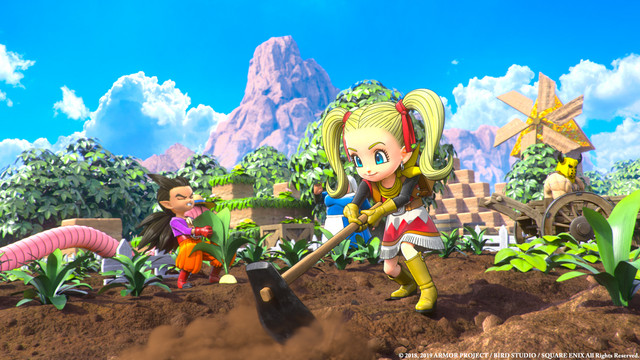 Considering the mechanics on paper is one thing, but Builders 2 also has a massive amount of charm going for it. It's a beloved world for a good reason, and Akira Toriyama's goofy loveable characters allow you to overlook combat shortcomings. Traveling to an island, seeing the dismal state of the village when you start, and seeing just how vibrant and lively the village is when you leave is a lot of the appeal of the game. On an island, you have a Story Quest necessary to defeat the Children of Hargon, and villager quests, necessary to level of the village itself. These tend to be fairly structured and linear, but there are still secrets to find and bonus puzzles to solve if you check for hidden areas. A new auto-map and fast travel option make this easier than ever. Building the most bare-bones structures to reach the goal, the main story took me over 40 hours to complete. If you work hard to make your villages look pretty and cohesive, this could take even longer.

The game doesn't end with the story islands, however. You still have the Isle of Awakening to build on, with missions to both improve the landscape of the island with rivers, forests, and greenery, and a variety of building projects, both tiny (an item shop) and massive (a giant pyramid). I haven't had a chance to even dent this postgame content. Although I wasn't able to try out this feature in the review copy, the Isle of Awakening has a portal to allow 3 friends from over the internet visit and work together with you on building projects. You can also take pictures of scenes that impress you and share these on the game's bulletin board system. For dedicated builders and veterans of multiplayer Minecraft servers there's a lot to love here. 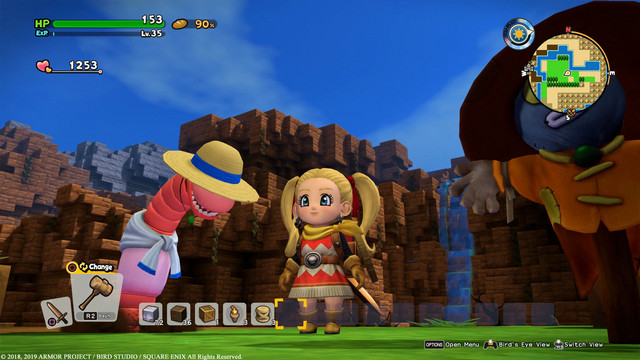 Reservations about the combat aside, I really enjoyed my time with Dragon Quest Builders 2, and I look forward to tackling more of the endgame content. There's something really satisfying about building work that keeps me coming back for more. The addition of a farming village on the first island also gave me some of the same satisfaction I got from the Harvest Moon series back in the day. If you enjoyed the first Builders, you'll probably enjoy this as more of the same, and if you've been looking for a series like Dark Cloud or Actraiser you owe it to yourself to try Dragon Quest Builders 2.

+ Keeps the fundamentals of the first Dragon Quest Builders

- You're the second fiddle in combat, which makes combat less fun

Are you a seasoned Dragon Quest Builder or still a Child of Hargon? Will you be giving this building thing a try? Let us know what you think of the game in the comments!