How HEYBOT! Broke All The Rules Of Shows Designed To Sell You Toys

Sure, HEYBOT! wanted you to buy things, but its approach was a little different than you'd expect 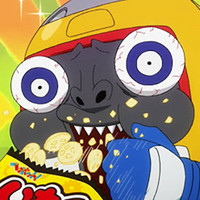 There's something vaguely dishonest about kids cartoons designed to sell toys. It's not that these shows can't be good -- PreCure and Gundam are two hugely popular franchises even among adults for a reason -- but they always exist within the same specific framework: Advances happen not because they make sense from a character or narrative perspective, but because the merchandising department demands it. Sure, the Super Mega Robot turning into the Super Mega BLASTER Robot might have helped push the plot along, but it also helps to push more Super Mega Blaster Robot toys off the shelf.

And while adults might be able to see the manipulative aspects of these series, kids can't. All they see is how cool it looks, and that they could own it. The deception is such an ingrained part of this breed of show that it's hard to imagine what an upfront version of it might look like. Luckily, we don't have to, as HEYBOT! exists. 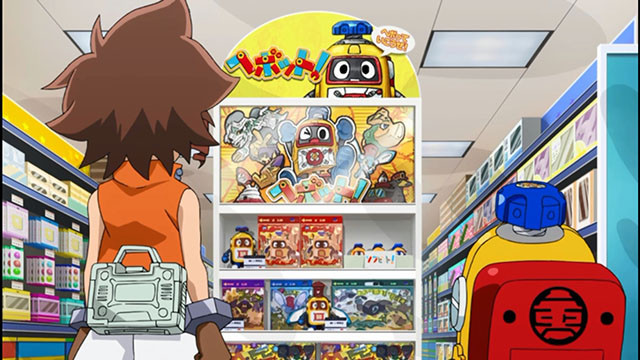 On a surface level, HEYBOT! is a show about Prince Nejiru, who is obsessed with something called Vocascrews (which are all available for sale) and his Vocabot partner Heybot (also available for sale) who loves a snack called Imochin (again for sale). Vocabots can use combos of Vocascrews to perform surreal gags based primarily around really bad puns (this is exactly what the toys do) which they use to compete. It's an ad for the merch in an unusually direct fashion, and it's not even slightly subtle about it - especially because the fourth wall doesn't exist. When other shows settle for showing you cool things that you just happen to be able to buy, HEYBOT! flat-out says, "Hey! This is a thing you can buy in real life! Isn't that neat?" Which is both shockingly blunt and strangely honest.

More importantly, though, the presentation of HEYBOT! is deliberately anarchic to the point of bordering on Dadaism. FLCL at its most frenetic might be the best mainstream comparison, but HEYBOT! never turns off, and it's got a lot more fart jokes and gross faces and awful puns to boot. Characters switch between iterations of themselves with little rhyme or reason. Background characters are bizarre monstrosities. References range from fairly mainstream (Evangelion, Your Name) to absolutely incomprehensible for a Japanese kid's cartoon (Terror at 30,000 Feet, The Shadow Over Innsmouth).

The lack of a fourth wall means it's virtually impossible to tell what's actually happening in-universe and what's only perceptible to the viewers. The last episode involves HEYBOT! getting canceled for being an atrocity and replaced by a boring, wholesome version of itself. It's nonsense, pure and simple -- 50 episodes of the creators throwing every dumb idea they had all the wall to see what stuck. 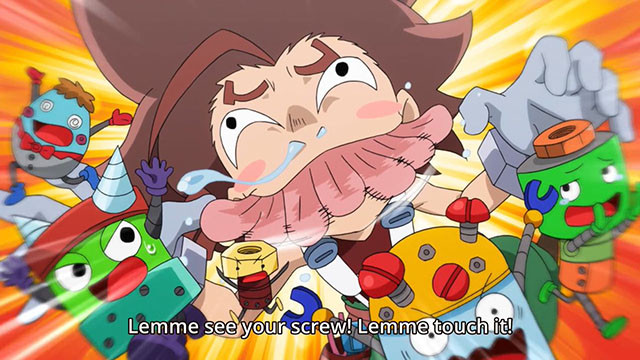 It doesn't even seem to want to sell you on the merch, honestly. In most shows, where the toys are in-show items (like Precure), the people using them are cool and admirable, the type a viewer would look up to and want to emulate. Not so for HEYBOT! Nejiru is lazy and entitled, and his fixation with screws comes across less as an Ash Ketchum "Gotta Catch 'Em All!" and more as some kind of bizarre fetish -- and not just because "screw" is a euphemism in English, it's clearly very deliberate. You do not want to be like Nejiru.

There's a whole cadre of secondary cast members who have vowed to supplant him as protagonist -- that's how bad he is. It's the same with Imochin -- despite it being the official tie-in snack, the degree to which Nejiru and Heybot stuff their faces with it swings past making it look delicious and on to being kind of disgusting. This is the heart of HEYBOT! -- it might be obliged to sell things, but it's going to go about it in the most chaotic way imaginable.

The best example of this might be the episode with Sofbit -- a soft vinyl version of Heybot that's smaller than the original and doesn't have moving parts. The moral winds up being "you don't have to be jealous of others, because there are people who will love you for what you are" if you're being generous, or "just cause the soft vinyl Heybot toy doesn't have as many features doesn't mean you shouldn't buy it" if you're not, but the way it gets there is absolutely wild for a kids cartoon. Sofbit attempts to murder the original by pushing him into a trash compactor and takes his place (Nejiru is incapable of telling the difference between them, because he is an idiot), only for Heybot to be saved by a group of knockoffs that gladly consign themselves to death. It ends with Heybot and Sofbit reconciling and declaring that all Heybots are genuine -- except the knockoffs, obviously. 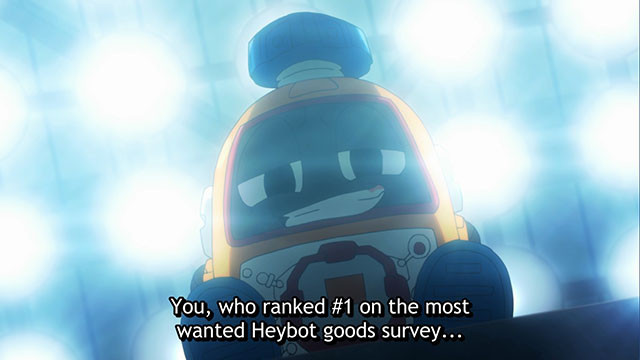 Or maybe the best example is the introduction of the new shiny piece of merch, Awesome Fine Screw. Unlike most screws in the show, which are just solid pieces of plastic, Awesome Fine Screw talks, lights up, has buttons you can press, and apparently feels so amazing to get screwed by that there's an entire episode dedicated entirely to every major character trying to get him to stick it in. Because why settle for something being merely appealing in-universe when you could make everyone so obsessed with it that it gets kind of weird? 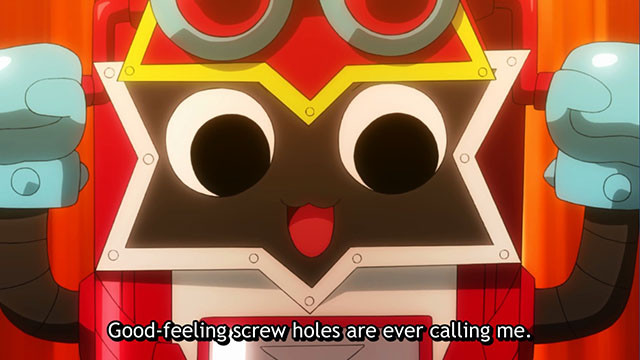 There are genuinely good merch-driven cartoons that manage to work within the assigned framework to create something thoughtful, earnest, and poignant -- Go! Princess Precure and Mobile Suit Gundam: Iron-Blooded Orphans, for instance. HEYBOT!, on the other hand, can't be called "good" by any conventional meaning of the word. But it's also strangely brilliant -- rather than simply being a show made to sell toys, the show itself is an interrogation of the very concept of a show made to sell toys. The toys know they're toys and the characters know they're characters, so of course they wind up vying for screentime. The overblown, almost sarcastic way the toys and tie-ins are presented as desirable not only makes it perfectly clear that yes, this is an ad, but it might even serve as a deterrent to buying them.

After all, do you want to be like Nejiru, salivating over screws? Or Heybot, shoveling Imochin into his mouth? How about joining Awesome Fine Screw's harem? The mere idea of a show designed around getting kids to buy things is ridiculous, says HEYBOT! (which is totally available on Crunchyroll.) Let's see how ridiculous it can get.

Have you watched HEYBOT!? Did it make you want to eat Imochin or never go into another toy store in your life? Let us know in the comments!