Conflicts of Color in the Granbelm Anime! 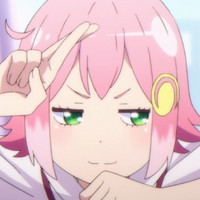 Hey all, and welcome back to Why It Works! In the leadup to the summer season, Granbelm was definitely one of the titles that I was most excited for, though I didn’t actually have all that much to go on. Anime-original productions tend to be very well-suited to anime as a medium, since they’re not being translated from prose or manga panels, but this also means that there’s no source material to offer a reasonable estimate of the show’s narrative strength. All I really had to go on was the strength of director Masaharu Watanabe, who’d done so much work to elevate his earlier Re:Zero, as well as the dazzling visual appeal of the show’s first trailer. And if that first trailer taught me anything, it was this: Masaharu Watanabe sure likes the color purple. 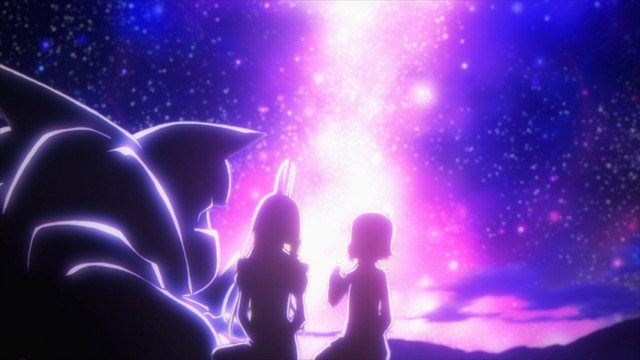 Having now seen Granbelm’s first three episodes, I can emphatically confirm that Watanabe still loves the color purple, and also that Granbelm is a really great show regardless. Pitting mecha-piloting magical girls against each other in a narrative that echoes Madoka, Fate/stay;night, and many other beloved properties, Granbelm’s early episodes have been stuffed with thrilling robot battles, endearing personal confessions, and abundant visual treasures. And though purple may still be the color nearest to Watanabe’s heart, I’ve also discovered that Granbelm’s love of vivid colors extends far beyond that - that in fact, its use of color is nearly essential to its storytelling.

Granbelm’s intelligent use of color begins with its fundamental character designs. It’s an anime truism at this point, but it still bears repeating: in anime, characters’ hair colors and overall visual designs are often chosen to emphasize their fundamental personalities or roles in the story. Red-haired characters have fiery tempers, blue-haired characters are cool and reserved, rich blond hair often implies wealth or foreign parentage, etc. It’s a convenient piece of visual shorthand that quietly impacts the tone of characters’ statements, while neatly establishing clear contrasts between key characters, letting emotional dynamics be emphasized through visual contrast. 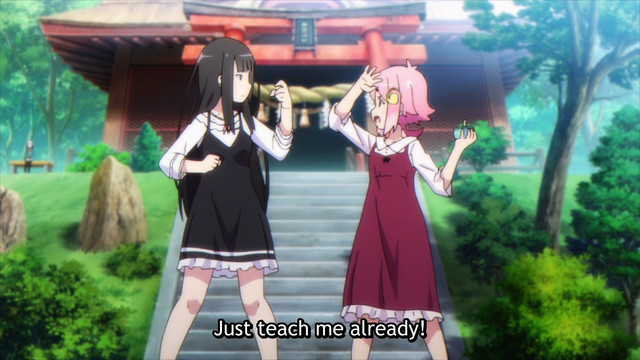 Both the hair colors and styles of Granbelm’s three most prominent characters embody this reliable approach to visual design shorthand. Protagonist Kohinata’s short, light pink hair implies a sense of lightness and chipper friendliness, as well as a subtle implication that she might not take herself so seriously. Ernesta’s long, stately black hair indicates the opposite - that she has a darker personality, and also that she takes herself more seriously, both things quickly proven true by the narrative. And in contrast to both, Anna’s bright red hair and convoluted curls imply both her fiery personality and her pompous self-image, the central contrast of her personality clear even in her visual design.

That style of color-coding is quite common in anime, but Granbelm consistently builds on the inherent contrast of those designs through the strength of its backgrounds and overall color palettes. The show’s central emotional bond is the building relationship between Kohinata and Ernesta, a bond that is expressed not just through their overt dialogue, but through the coloration of the world around them. Though they are often separated in the real world, Kohinata and Ernesta come together in the otherworldly Granbelm arena, where the scenery itself echoes their bond. Fuse Kohinata’s pink and Ernesta’s black, and you arrive at the dazzling combination of Granbelm’s arena, that rich purple Watanabe loves so much. 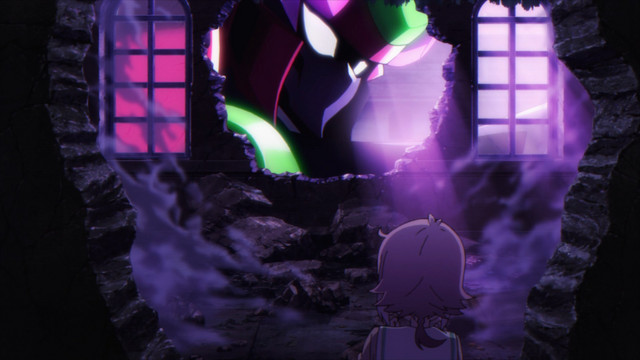 That emphasis on color design as an echo and amplification of emotional drama carries through into Granbelm’s real world segments as well. After most of episode two sees Kohinata and Ernesta growing closer against a backdrop of bright sunlight and lush primary colors, Kohinata’s reveal of her underlying sadness and self-hatred is accompanied by the setting sun, her reflections on the past and melancholic mood echoed by a color palette that emphasizes nostalgia and endings. But then, when she’s at last inspired to fight, the scenery blooms in bright pastels, the force of her personality clear in the colors she inspires. The sun is put to similarly effective use in episode three, where Anna’s tirade against Ernesta is accompanied by angry red tones that emphasize the violence of the conversation, while also implying Anna’s emotional dominance through how her chosen color takes over the whole world.

All these subtle tricks of visual storytelling come together to inform the drama of Granbelm’s battles, as distinct colors fight for supremacy against a beautiful, otherworldly skyline. Altogether, Granbelm’s gorgeous design work is keeping me engaged even when the action slows down, and the show’s beautiful fight animation and sympathetic, highly expressive characters have me hooked regardless. I hope you’ve enjoyed this exploration of Granbelm’s visual theming, and if you haven’t, checked it out, I highly recommend trying one of the most beautiful and thrilling shows of the season!

What’s your own favorite part of Granbelm so far? Let us know in the comments!