AnimEVO: The Fascinating Fan-Run Side of the World's Biggest Fighting Game Event

What do you do when your favorite game’s not in the official EVO roster? You run it there yourself! 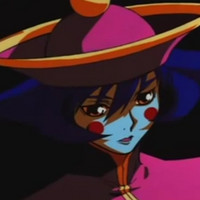 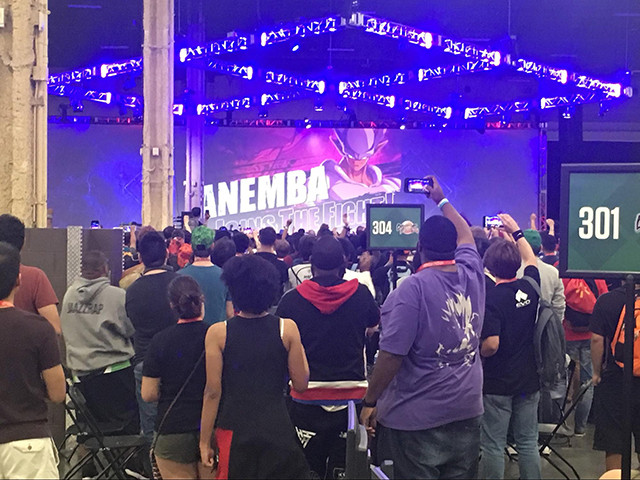 EVO is a massive event, filled with thousands of players from across the globe coming to compete in nine carefully selected official tournament games. But with hundreds of fighting games out there, it’s easy for someone’s favorite to be left off of the official roster. So what’s a fan of lesser-loved fighting games to do? You play in a side tournament at the event for your games of choice. And if there isn’t a side tournament? Well, then you roll up your sleeves and set one up yourself!

But being a tournament operator, or “TO,” isn’t easy. I should know, because my boyfriend Matt “LordBBH” Hall and I ran our own side tournament for the very first time this year! You not only have to deal with a lot of running around at the event itself, but you also have other logistics to worry about: getting space, keeping track of entry fees and payouts, handling registration, and getting your tournament publicity. Thankfully for us, there’s AnimEVO, a collective of EVO side tournaments that works to help both TOs and competitors participate in the games they love. 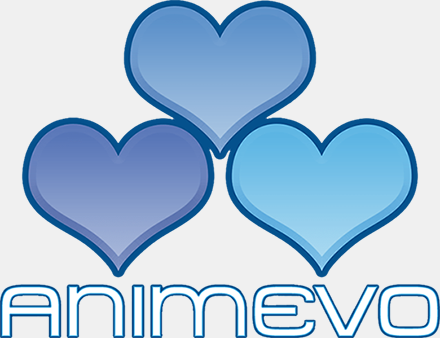 AnimEVO began back at Evolution 2014. As Capcom games like Super Street Fighter IV and Ultimate Marvel vs. Capcom 3 dominated the official EVO lineup, many so-called “anime” games, called such for their anime-derived aesthetic (and that they were typically more popular in Japan), were often left off the roster. The first AnimEVO featured games like Aquapazza, Melty Blood, Arcana Heart 3 Love Max, and even Jojo’s Bizarre Adventure All-Star Battle.

AnimEVO’s current co-director, Hagure, first joined the event for its 2016 incarnation. “I initially came to the team to create the AnimEVO website. I didn't plan on doing much else besides that at first,” Hagure admits. But as the event implemented online registration and required increased organization, he found himself becoming more and more involved. “Last year was probably the first I was really the one directing stuff.”

And AnimEVO certainly needed someone to wrangle everything. As EVO has grown, so has AnimEVO alongside it, allowing more and more games to join its collective of side tournaments. The amount of players entering every year has increased, too. “Removing a lot of the redundancies shared between TOs and streamers gives them more time to focus on promoting, organizing & running tournaments & streams, leading to more interest & a better event overall,” says Hagure. “Also, online pre-reg & having all the info in one place has helped attract more players. Getting cross-entries from players between games they wouldn't normally enter on-site is something we've seen a lot of. Finally, people, especially veteran [community members], are starting to see that we're here for them year after year, and know that we're dependable. Some folks are now anticipating our lineup more than EVO's [main games]!” 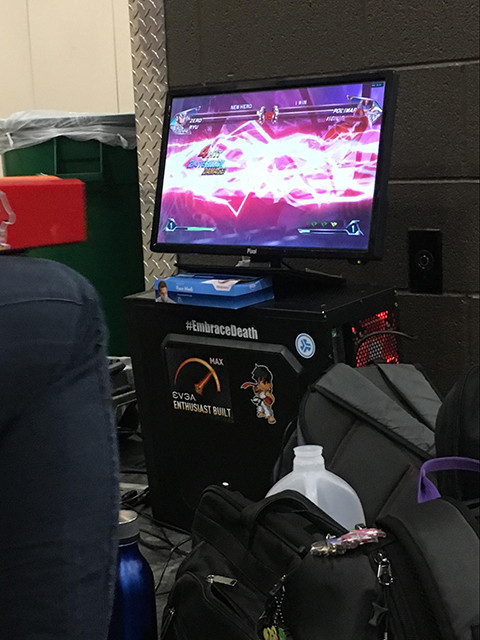 So what kind of games will you see at AnimEVO? Well, you have obvious anime-inspired games like Melty Blood, Vampire Savior, older versions of Guilty Gear, BlazBlue, and Persona 4 Arena. You’ll find games that have a direct anime connection, like Sailor Moon S for the Super Famicom, the Fist of the North Star fighter, Tatsunoko vs. Capcom, and Dengeki Bunko Fighting Climax. You’ll also find older games like Garou: Mark of the Wolves, Teenage Mutant Ninja Turtles Tournament Fighters, and Fighter’s History Dynamite—the tournament Matt and I ran. Even competitive games not considered “fighting games” have been welcomed into the AnimEVO roster, like Gundam Versus, Windjammers, Catherine, and Puyo Puyo. One year there was even a Granblue Fantasy tournament. No, not Granblue Fantasy Versus, the mobile game!

“Obviously, we lean towards fighting-genre videogames, especially those that don't get the usual main-stage treatment. But pretty much as long as it is some kind of competitive game, that has the necessary TOs dedicated to run it, we'll allow it,” says Hagure. 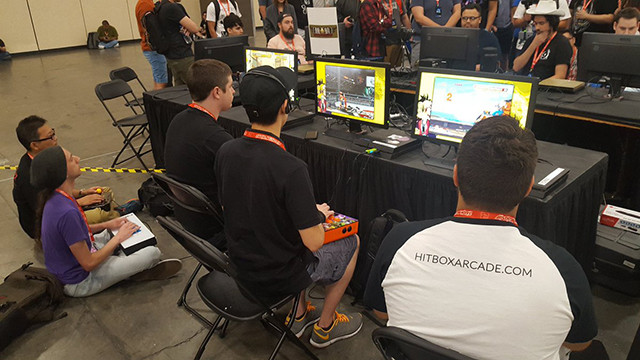 Mark of the Wolves Tournament photo by @NocturnalSRK

This year, AnimEVO’s roster boasted a whopping thirty-one games for players to consider entering. While some players may stick to only one or two games, others may enter multiple titles—and place very well in many of them. Some players even come to EVO primarily for AnimEVO games—this year, a group of Korean players made a splash when they came out to EVO for the express purpose of playing in the tournament for Capcom’s fan favorite Dreamcast fighter Project Justice.

The Project Justice side tournament was dope as hell. @bananashot3 and the Korean team came all the way to Evo only to support PJ. Some old FGC heads showed up as well. @NeoRussell is the community MVP for running this. Great times were had ???? pic.twitter.com/ozpd8HrGDa

Sponsors have stepped up interest in AnimEVO as well, with companies like Sega, Atlus, and Arc System Works promoting AnimEVO’s side tournaments and even contributing things like setups, streaming space, prizes, and winners’ pot bonuses. This year, Arc System Works helped out to run the first-ever tournament for the recently released KILL la KILL: IF, and Square-Enix stepped in to promote free entry and a major pot boost to Million Arthur Arcana Blood. “31 games was a pretty big jump for us, [and] with the ArcSys World Tour, KILL la KILL and Million Arthur Arcana Blood sponsor relations, we did grow a significant deal organizationally over previous years,” Hagure notes. Even the strange, obscure games can get some surprise support: the one-man crew behind the bizarre and beautiful freeware fighter Ultra Fight da Kyanta 2 was watching all the streams and giving out thanks to the players and organizers. 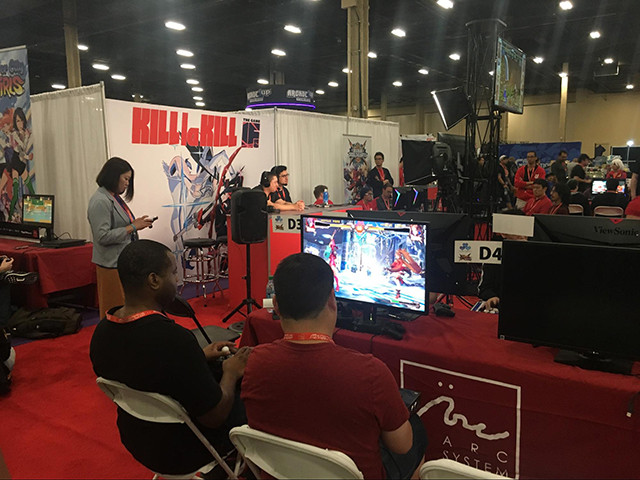 Of course, not every game in AnimEVO has a corporate sponsor behind it: many are run by and for longtime fans of these games simply to give other folks who love these titles a rare chance to play them competitively. That’s what motivated Matt and I to set up a side event for Fighter’s History Dynamite, a Neo-Geo fighter by Data East that is largely unknown to the mainstream, but beloved by fans of older fighting games. It had never been in an EVO before in any form, and we’d struggled to get casual play set up at previous EVOs, so we decided to take matters into our own hands.

Making the leap from playing to TOing is quite a jump, however. At a major event like EVO, there are many players across many games, all of whom have different schedules and potential conflicts. Chasing down people to play often proved challenging, especially since FHD’s playerbase of Neo-Geo fans overlapped a lot with players being called to play in their pools for the new Samurai Shodown at the same time. Brackets were tough to update online, necessitating a shift to tracking everything on good ol’ pen-and-paper. Japanese players with unusual control setups needed help configuring their sticks and buttons and conveying information to their opponents, which required me to step in as an interpreter. We had hoped to have the tournament done in two hours, but it wound up being more like three-and-a-half due to needing to chase people down to play, make calls on no-show disqualifications, and deal with other odd issues that cropped up. Even with two people, it was hard work! 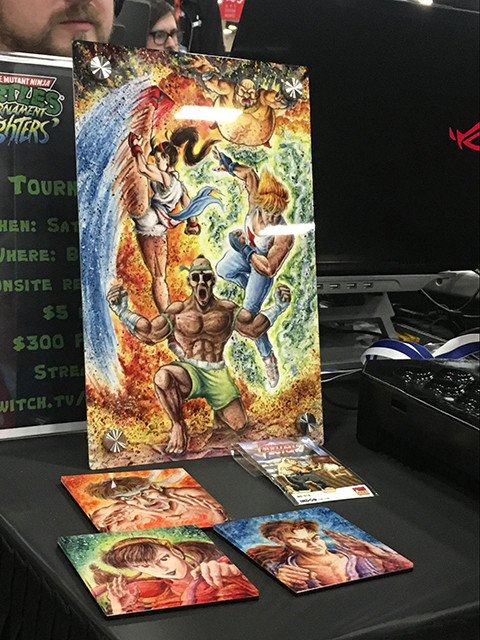 In the end, however, people really enjoyed our tournament, and several players went home with custom-made trophies featuring original art by Anthony Vaccarelli. It was tough, and mistakes were made, but in the end most everyone had a great time.

So, what should you do if you want to run a tournament for your favorite neglected fighting game at EVO? Well, for starters, you must realize that you are going to be committing a huge chunk of your time at the event (and before it) to make sure everything goes as smoothly as possible. You’ll also have to make tough decisions—if that one guy hasn’t shown up to check in for the past hour, should you disqualify him because he’s holding up tournament progression, even though he’s been doing well? Sometimes you just have to act in the best interests of all the other participants.

Hagure has his own advice for would-be AnimEVO TOs. “First, make sure you're committed to going to EVO and running a side tournament during the largest FGC event. Dedication is the most important thing we ask for. Once you're absolutely committed, we always send out a call for volunteers and create an application form shortly after EVO does their initial lineup announcement. Filling this out & returning it ASAP is the best way to make sure we can work with [people interested in helping with AnimEVO].” 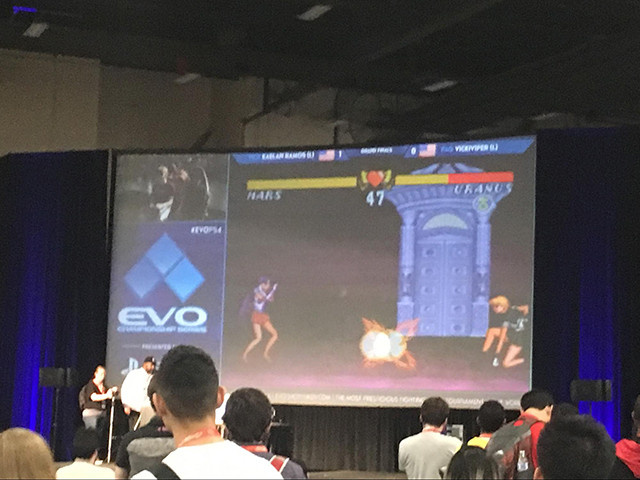 “When it comes to qualifications: We highly suggest having had TOing experience, especially at a major or regional sized event. Running side events (especially the game they've submitted) is a huge plus. For less experienced folks, we ask them to find someone with more experience to help them run their game. Outside of that: Stay informed and have passion for your game! Love for our games is really what motivates us all in the end.”

What competitive game would you like to see at EVO as a main game or a side tournament? Would you be willing to run it yourself if needed? Talk amongst yourselves in the comments!

Heidi Kemps writes about games, otaku culture, and other odd topics of interest across many different publications. The amount of doujinshi and figures in her living space is either astonishingly awesome or somewhat terrifying, depending on your point of view. She runs the website gaming.moe and can be found on Twitter @zerochan.