Quinning It Up at the First Ever The Quintessential Quintuplets Exhibition 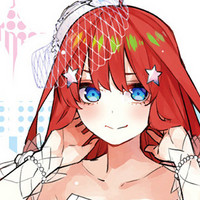 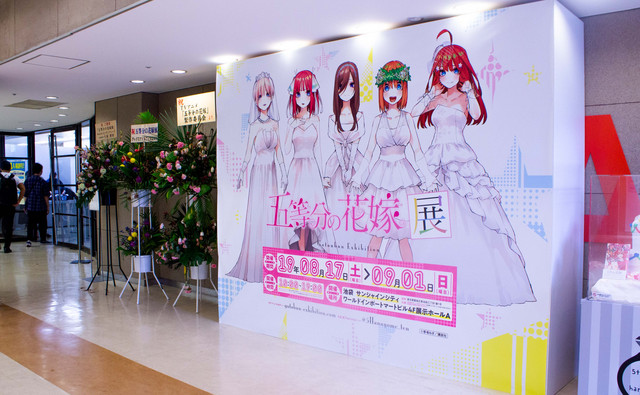 Fan-favourite five sister harem anime and manga series, The Quintessential Quintuplets had their first ever exhibition in August at Sunshine City in Ikebukuro, brightening up the already sunny area. I visited the area to soak in the pleasant charm of the Nakano sisters.

Littered all over the Sunshine district of Ikebukuro were posters advertising the exhibition for The Quintessential Quintuplets. It’s a little funny seeing the area seen in ‘punk’ series like Durarara to have posters for the exact opposite type of series, but Ikebukuro doesn’t shy away from romance, with one of the biggest draws for anime fans being the female-centric Otome Road, housing many anime shops that cater to female fans.

Though frankly, I’m a little disappointed that the exhibition wasn’t at Nakano Broadway, it would have been the perfect opportunity, but I digress. 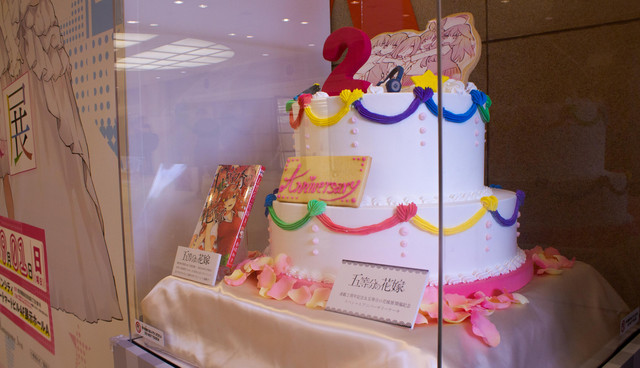 As with many exhibitions in Japan, a lot of the pieces weren’t allowed to be photographed. I’ve done my best to show you what I can!

After getting my ticket, I was quickly guided into a quiet hall of manga volume covers. The ten quintessential covers of the currently released manga volumes were blown up and were of high quality. Just down from the manga covers were detailed drawings of each of the five Nakano sisters and Futaro; they qualified to be extremely cute. 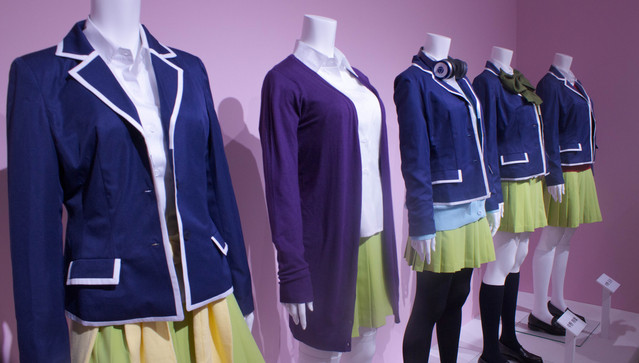 The first big exclusive section of the exhibition was a highly detailed recreation of each of the Nakano sisters school outfits, with their signature style. The outfits were situated next to a quite complicated, but also very insightful, relationship chart of how all the girls connect to Futaro. It was way too much to get my head around it as an anime-only watcher.

The rest of the exhibition was themed after each sister. Across all the walls throughout the entire exhibit were panels from the manga series featuring key moments concerning their individual stories. Unlike the Takeshi Obata exhibition, which had the original drawings, the manga panels on display here were high quality reproductions of the original panels on high-grade paper. It was easy to see the panels from a distance in the densely packed exhibition halls. 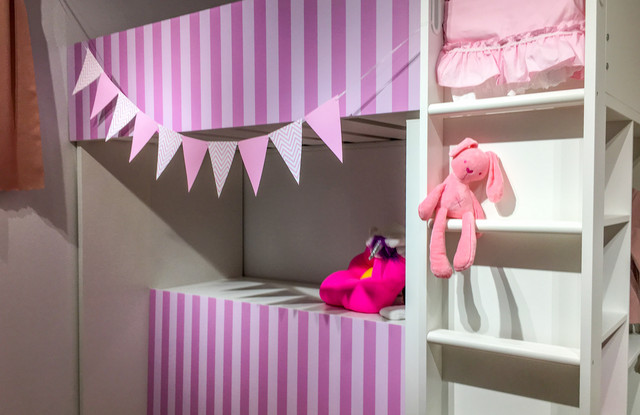 Inside each of the Nakano sisters little areas was a one-to-one recreation of each of their bedrooms, which was a joy to behold. Their personalities were on full display in each of their rooms with Ichika’s room being the messiest (of course!) and Nino’s being the pinkest room by far matching her cold, yet loving nature.

I felt Yotsuba’s room had the most character detail, with it matching her green hair and having a nature theme. Tucked away on her desk was her ribbon! Itsuki’s room on the other hand was in a western style, with furniture that looked like it was from an IKEA catalogue. What struck me about her room was the smell—the entire room had this new wooden smell, much like you’d get from newly bought furniture, making the room feel like it hadn’t been lived in.

My favorite room had to be Miku’s Japanese style room. Her love of Japanese history is reflected in the tatami mat room that could have been found in any Edo-style/era ryokan. It was so different from the rest of the Nakano sisters' rooms that this room stood out to me completely from the rest. 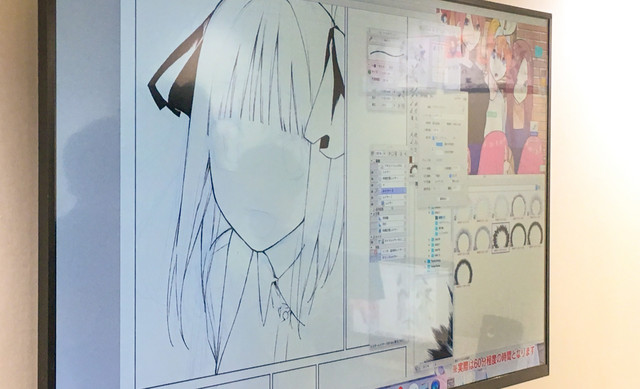 Around the corner was chapters from the latest manga arc “Sisters War”, not wanting to be spoiled, I turned my gaze toward a curtained area. Beyond the veil was a heavily monitored room with giant signs that read “NO PHOTOS.”

It was a room made up to look like a chapel, with life size standees of all five Nakano sisters dressed in their own style of bridal gown. It was truly a sight to see, and for fans of the series, it’s probably their greatest wish to see their favourite Nakano sister dressed up. 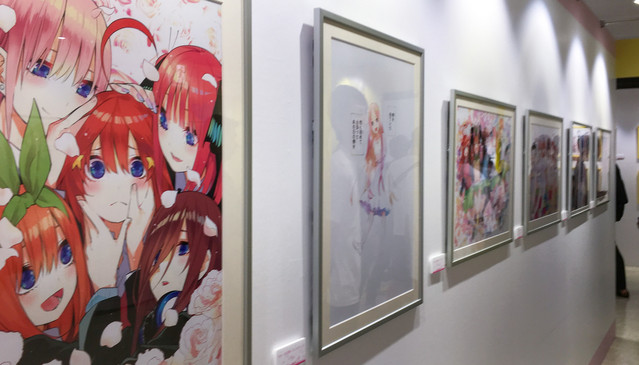 Permeating throughout the entire exhibition was the sound of the The Quintessential Quintuplets OP “Gotoubun no Kimochi” on repeat, and for the life of me I didn’t know where it was coming from, until I walked into the last room. It was a looping video of the entire manga series up until that point set to the song. It was really cute seeing how they animated the panels to show off important moments for all the girls. But with that, I was led out to an area where I could take a picture of me as MC-kun and leave a message for any of the quintuplets.

The exhibition was nicely put together, if not a little crowded. The halls weren’t that big and I felt like I was being shuffled through the entire place. For fans of The Quintessential Quintuplets series, it would have been well worth going to see, especially for the rooms and standees, and for casual fans, like myself, the exhibition got me to be that little bit more of a fan. 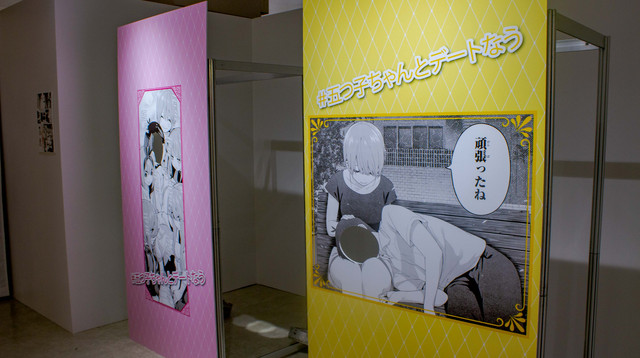 The Quintessential Quintuplets Exhibition ran from August 17 to September 1 at Ikebukuro Sunshine City. The second season of the anime is currently under production.

So Crunchies, the big question is: which of the Nakano sisters is your favorite? I’m partial to Ichika myself. Fight about it down in the comments below!

➡️ Watch the first season of The Quintessential Quintuplets on Crunchyroll! ⬅️

Tags
the quintessential quintuplets, event report, exhibition
« Previous Post
Nine Accursed Souls Join the Cast of the Blade of the Immortal Anime
Next Post »
Up Your Esper Game with Mob Psycho 100 Pre-Reg Campaign
Other Top News
17 Comments
Sort by:

Let's Warm Up at the Re:ZERO The Frozen Bond Collaboration Cafe