Was the journey so far worth it? 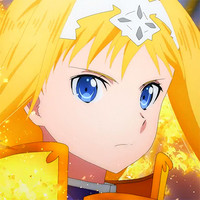 Lately I've been playing Final Fantasy XIV to prep myself for Shadowbringers. It’s a fantastic game, filled with intricate storylines, character development, and dramatic cliffhangers, and has been a kind reminder of how fun and cool MMOs can be with how it brings people together to enjoy each other’s companionship. It’s also been a great callback to the emotional journey of the recently ended Sword Art Online: Alicization, which is to be continued in just a few months time. 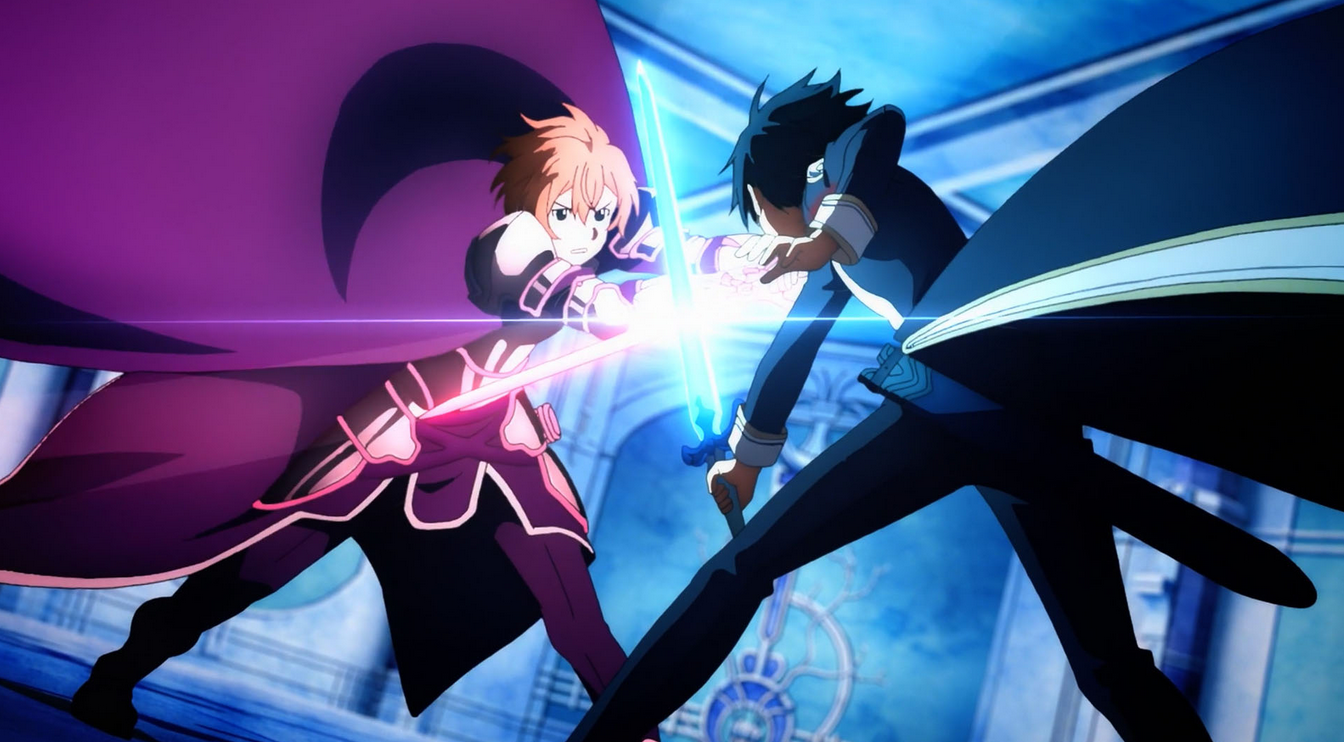 Sure, you say, Sword Art Online is an “MMO” story, but to what extent? And I would argue, you’d be right, up until Alicization. But what separates Alicization from any of Sword Art Online’s previous arcs is how grand in scope and storytelling it is. Whereas each arc was distilled into about twelve episodes or less, Alicization is a whopping two full cours—that’s nearly 50 episodes of content! It’s this kind of length that can seem daunting at first, but upon closer look, adds lofty support to the MMO narrative I think the series always tried to be. After all, a MMO does stand for massive multiplayer online, and Alicization’s depth and length matches the kind of audacious storytelling an MMO can have. 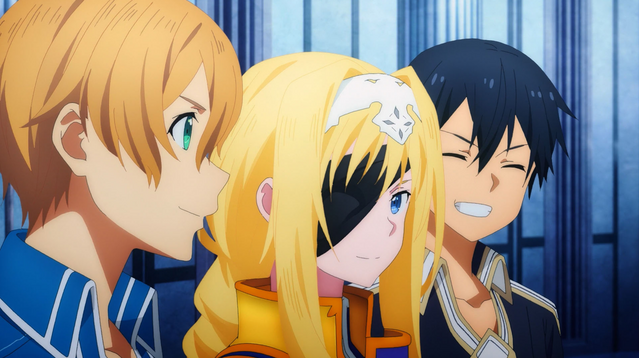 Part of this can be seen in Alicization’s concept. Unlike Phantom Bullet or Fairy Dance, where Kirito was entering the game to save a specific individual or investigate a terrorist, Alicization has the hallmarks of the first arc: Aincrad. He’s trapped in a game against his own will, and dying in the game definitely means suffering death in real life. Time also passes quite differently in the game as opposed to the outside world. While this sounds like a duplicate setup, Alicization however, adds a twist: Kirito has none of the support he’s developed in the past four to five arcs. He is completely and utterly alone, without any solid contact or connection to anyone in the world outside.

This kind of danger presents two fantastic opportunities. The first is that no one knows Kirito and his history. To other characters in the game, he’s just another poor farmers boy. This rips Kirito of the ridiculous and often overbearing list of achievements that made him so desirable (and hated), which led to weaker parts of the story, like his harem building. There is almost none of that in Alicization, and it is incredibly refreshing. It’s this erasure of already established heroics that reduces Kirito to a relatable human, making his emotions feel earned and natural rather than structured and inauthentic triggers for a more dramatic reveal or battle. 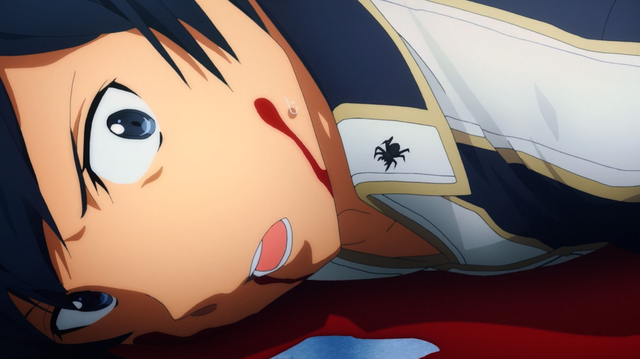 The second opportunity, and perhaps the most distinctive part about Alicization, is the development of two secondary characters, Eugeo and Alice. One of my biggest issues with Sword Art Online was how little depth the supporting cast often had. They were often created as checkpoints for Kirito to progress through a game, only to be sidelined as a harem-like addition. This improved in certain arcs - Rosario’s Yuuki for instance, is a compelling character that stands outside of Kirito’s heroic narrative, and Sinon’s recovery from trauma in Phantom Bullet is definitely more compelling than most. But it’s really Alicization where secondary character development shines. Alice originally starts out as a captive of the corrupt system, and is even brainwashed to fight her own childhood friends. But through her own determination and strength, she breaks out of it and comes to make decisions for herself. She’s also on par with Kirito, and expresses no romantic inclinations towards him so far, just simple friendship. 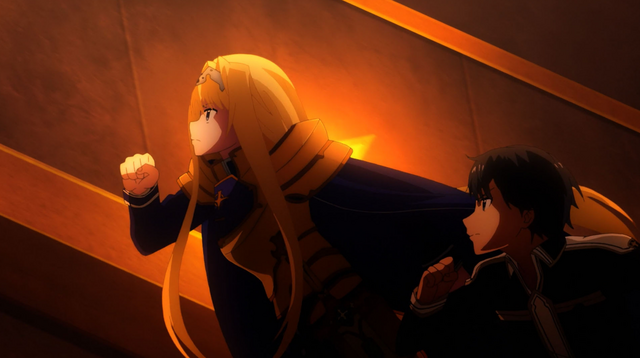 And Eugeo. Eugeo is easily one of Sword Art Online’s best decisions: he’s a fantastic foil to Kirito’s bravery and determination. Eugeo is kind, and with that kindness comes weakness, vulnerability, and honesty: things Sword Art Online have lacked in spades for a long time. What starts off as a simple journey with Kirito transforms into a story where we also travel with Eugeo. Nothing shows this better in the arc where they’re split off from each other and we see where that contrast in character leads to two very different developments.

We see Eugeo fall (and it is so important that we do, in a franchise where heroes only rise). We see him pick up his weapon against his most beloved friend, and we see him cast it away again so easily, to defend that same friend. It’s dramatic, but it works so well: we’ve walked with a character completely different to Kirito for twenty four episodes, and we watch him end in tragic and heartfelt manner as he dissipates into pixels in Kirito’s arms. It’s a brutal reminder that despite how human he was (and he was probably the most human character in the franchise). Eugeo is ultimately a product of a game, and his life is only given so much meaning—as much as we can ascribe to it. 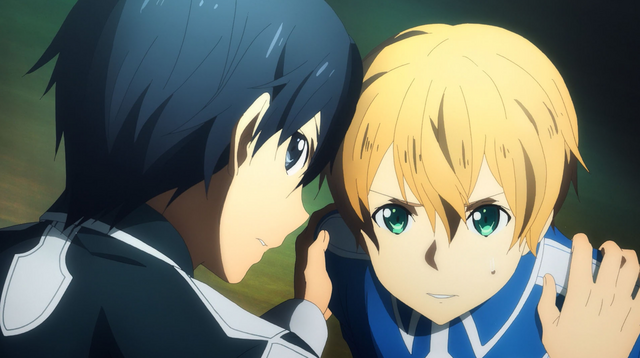 From there, stakes rise further. Sure, Administrator is finished, but there’s still a whole another war to survive, and we have lost a dear friend. Kirito’s life hangs in the balance, with this, Alicization reminds me so very well of the end of an expansion in any MMO: emotional catharsis, but at a great cost. I couldn’t be more excited for War of Underworld.

That’s not to say the first half has had its faults. Sword Art Online still relies on domestic and sexual violence as a case for heroism, and its long winded dialogue for world building could do with a lot more trimming and diversity. Despite these issues, Alicization has consistently proved itself to be a compelling story about MMO-style adventure, encompassing many of the traits that I feel make an MMO worth getting into. And no one better encapsulates this than Eugeo, a boy that started off as just another NPC, only to gradually develop into one of the franchise’s best characters. 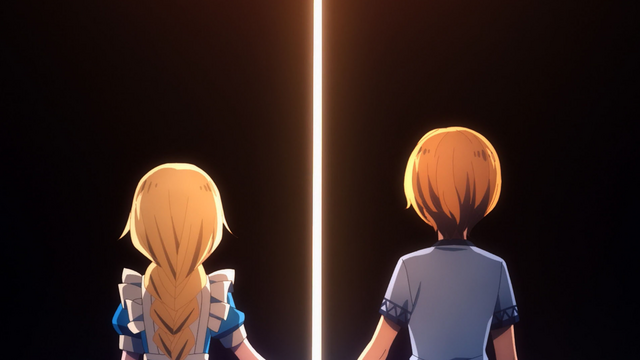 We may not know what’s in store for us without him to aid Kirito and Alice in War of Underworld, but it’s safe to say that his death has paved a far more interesting story with higher stakes as Kirito must not only navigate out of the game, but also save it: a more exciting, complete story than any of the ones from before. If you feel like Sword Art Online has lost its emotionally affecting touch that it might have once had, I can confidently say that Alicization is a perfect place to jump right back into.

Are you looking forward to War of Underworld? Do you have any theories for what will happen next? Let us know in the comments!