Tapping into Fist of the North Star LEGENDS ReVIVE with Producer Kohei Iwamoto!

We spoke to Sega’s Kohei Iwamoto about his newest game and love for Fist of the North Star! 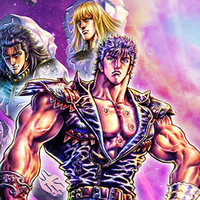 Recently at Crunchyroll Expo, I had the pleasure to check out the Fist of the North Star LEGEND ReVIVE after an invitation from the fine folks at SEGA. Before I got to interview producer Kohei Iwamoto wanted to show me how the game worked and let me try my hand at it in action. One of the things they wanted to focus on showing off was the unique tapping mechanic that calls back to Kenshiro’s use of a single finger to defeat his foes, combining thematic battles with rhythmic tapping. 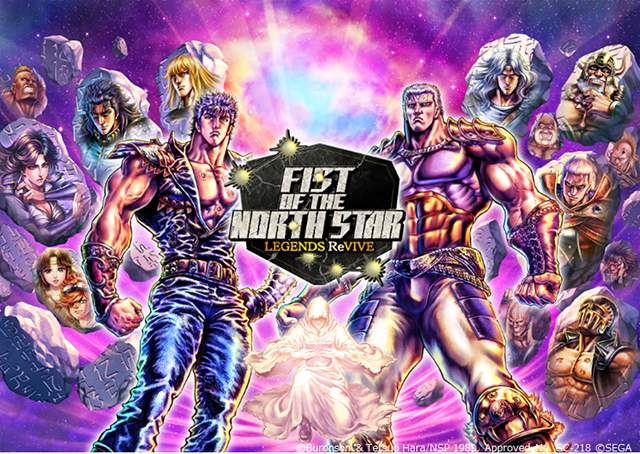 Thanks for speaking with us today and showing us your new game! Could you introduce yourself to our readers before we begin?

Kohei Iwamoto: My name is Kohei Iwamoto, and I’m a producer over at SEGA. I don’t know if you’re familiar with it, but I’m one of the producers of the Saint Seiya IP mobile game, and most of my work is based around anime IPs. My job is to bring famous anime Japanese IPs into the mobile market, and bring that content to anime fans worldwide.

As you know, there are a lot of supporting characters in Fist of the North Star, so for this game, we’ve made sure to have all of the supporting cast be playable in the game. You are free to edit your team however you wish; you know how in the anime, Kenshiro and Shin have this rivalry? Well, in this game, you can put them in a team to fight alongside one another.

Will it be a team of 3 characters? 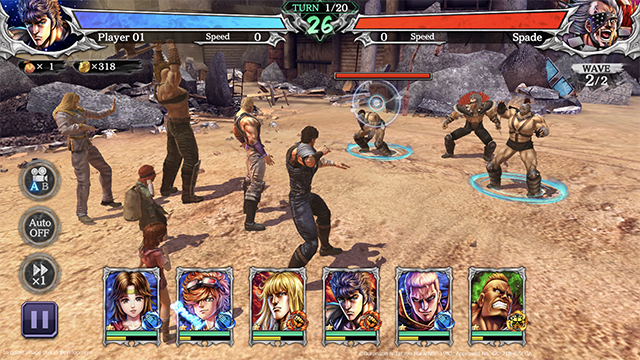 Kohei Iwamoto: In Fist of the North Star LEGENDS ReVIVE, Kenshiro, like in the anime, can attack enemies with only one finger. We kept that in mind when making this game, so players can feel they’re becoming like Kenshiro when they’re playing the game. And so we’ve implemented a system called “tap action combo system”.

In the battle screen, you can touch the enemy, and if you see the seven stars show up on the screen, tap it on the seventh and last point to unleash a combo! If you keep tapping at the last star each time, the combo keeps adding and building up, which will increase your attacking power.

So what happens if you fail to attack at the right timing; do your attacks still hit, or do they miss?

Kohei Iwamoto: You’ll still attack, but you’ll drop your combos, so you’ll have to start from scratch at the very first combo.

In the battle screen, the green bar is your health bar, and when you attack your enemy, this yellow bar keeps increasing. When that yellow bar is full, you can perform the character’s secret technique, which can also be used as a finishing move if you do it with the right timing. 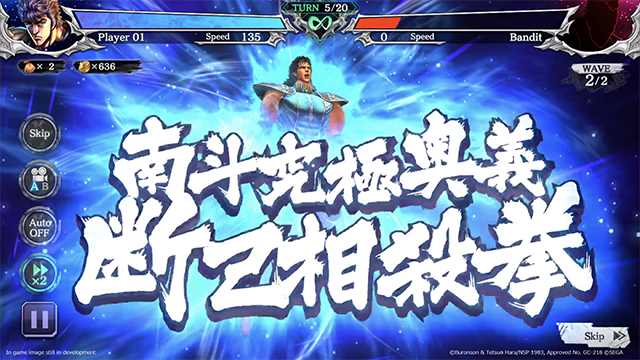 Kohei Iwamoto: When you hear an audible cue, you can swipe up to perform the character’s secret technique. If you finish off a character with the secret technique, a special battle ending will display where your enemy will blow up, like in the anime!

We also implemented the high-rendered CG movies, and also a motion comic! At the beginning of each stage, after the movie portion plays, it seamlessly loads the game right into the battle phase, which is one of the unique aspects of this game.

Thank you so much for the demonstration of the game. So, how are you enjoying your trip to Crunchyroll Expo so far?

Kohei Iwamoto: It’s my first time coming into the US, and I have a terrible jet lag. (laughs) I’ve been walking through the convention, and I walked by the artist alley, and I was amazed by the great anime and manga art by different artists! We haven't seen it yet, but we’re hoping someone draws Kenshiro! (laughs)

Fist of the North Star LEGENDS ReVIVE seems very interesting! What can players expect from the game?

Kohei Iwamoto: There’s two points to this. First: You can be Kenshiro and you can attack enemies with one finger, which is a concept that we made sure to include in the game. Second: We wanted to bring the actual Fist of the North Star series into the mobile game. We wanted to bring back the Fist of the North Star IP into the form of a mobile game, and for players who are new to the series to get interested in the story and game. 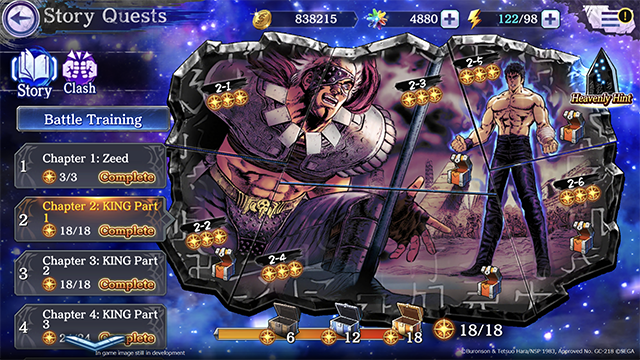 One of the key features is the ability to create a “dream team” of characters; does the game’s story change depending on who you use on the team?

Kohei Iwamoto: The story itself is directly from the story in the Fist of the North Star anime; it’s like watching its first episode. There’s no multiple endings, but the player can experience the original story with their own dream team.

Will there be any new alternative stories or “what if” scenarios to look forward to in the future?

One of the amazing parts of Fist of the North Star is the rogues gallery that Kenshiro faces over his adventures. Do you have a personal favorite rival or villain?

Kohei Iwamoto: My favorite rivalry is definitely between Mamiya and Rei; I liked their character development! But my favorite villain would have to be Juda.

It seems like Tetsuo Hara was very involved in the creation of this game. What was it like working with him to bring this game to life?

Kohei Iwamoto: Tetsuo Hara drew Kenshiro and Raoh from scratch in the main visual of Fist of the North Star LEGENDS ReVIVE. All of the illustrations for the game are done from scratch with supervision from Tetsuo Hara. I met with him, and got supervision and advice for the main theme of the game and the inclusion to make all the characters playable. I actually met with him for a previous interview that we did together! That interview should be available to read soon. 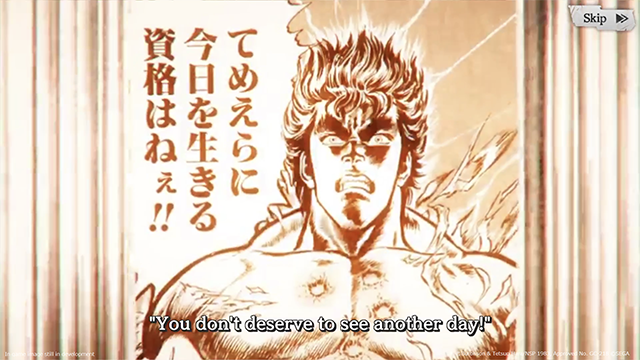 The new illustrations for the characters look really amazing; do you have a favorite one?

Kohei Iwamoto: I like Mamiya’s the best! There aren’t many female characters in Fist of the North Star, so Mamiya’s is very beautiful!

Fist of the North Star has amazing battles, but some of the most memorable pieces involve sound, from Kenshiro’s “ATATATATATA” to Heart’s “Hidebu!” and more! Can we expect to hear those classic lines reworked in this too? I’m looking forward to hearing Jagi and Souther myself!

Kohei Iwamoto: You can expect to hear the classic lines that Fist of the North Star fans know and love in this game. All of the lines in this game were newly recorded by the voice actors from the original Fist of the North Star anime. Also, you know how Kenshiro has the Hokuto Shinken techniques? Since some of the supporting cast of the series don’t really have secret techniques like Kenshiro, they will say their most famous lines instead.

Which of the brothers is your favorite: Kenshiro, Raoh, Toki, or Jagi?

Kohei Iwamoto: That’s a hard question! (laughs) I like Kenshiro, but I really like the bond between Toki and Kenshiro. One thing Toki says to Kenshiro “I’m putting your soul onto you” is a famous line in the series, and it’s one of my favorites. I’m also quite fond of the battle between Toki and Raoh where the theme of the “soul” comes into play there as well.

Thanks so much for speaking with us! Is there anything you’d like to say about Fist of the North Star LEGENDS ReVIVE before we go? 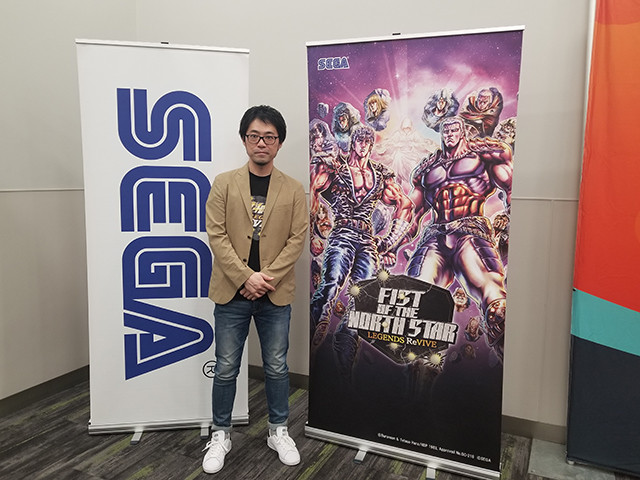 Many thanks to Iwamoto-san for showing us their new game and letting us get a hands-on demo from them right at the show, as well as for sitting down to talk to us about their love of Fist of the North Star and what they wanted to accomplish with LEGENDS ReVIVE. Shortly after we spoke, the game had its official release, so if you haven’t given it a try yet and you love Fist of the North Star, give it a try and see if you can ATATATATA your way to victory!

Download Fist of the North Star LEGENDS ReVIVE on Apple's App Store, and on the Google Play Store. Play it today!