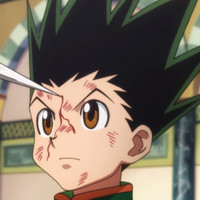 Hello folks, and welcome back to Why It Works. Today I’d like to talk about one of my all-time favorite anime, a show that somehow feels just as urgent and gripping every time I return to it, a show that I’ve introduced to many friends and hope to introduce to many more: Hunter x Hunter. Written and illustrated by Yoshihiro Togashi (the creator of Yu Yu Hakusho), Hunter x Hunter’s 2011 adaptation ran for one hundred and forty-eight episodes, covering roughly seven arcs, and concluding with the end of the manga’s most recently finished arc. 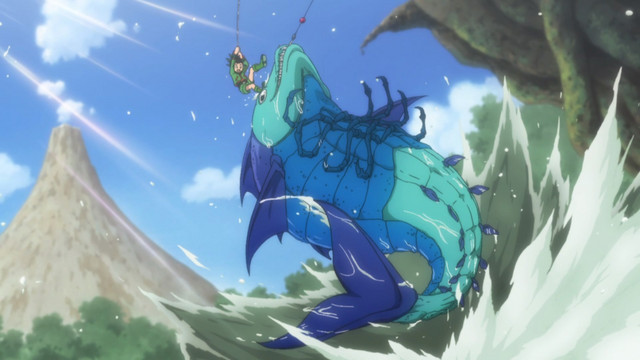 In my opinion, Hunter x Hunter is a genuine masterpiece. Its drama possesses that can’t-put-down quality common to the best popcorn entertainment, but its appeal is based on an understanding of storytelling and dramatic fundamentals so strong that it essentially serves as a living blueprint for writing compelling shonen stories. Today I’d like to start deciphering that blueprint, beginning with the show’s first arc, and use it to illustrate one particular facet of Hunter x Hunter’s appeal. If you’re interested in the mechanics of narrative, and shonen narratives in particular, this one’s for you. Let’s dive into all the things that make Hunter x Hunter work!

First off, though Hunter x Hunter eventually expands to encompass a vast array of characters, Togashi understands the importance of starting off with a clear, coherent dramatic hook. As the story begins, we are introduced to Gon, an exuberant and strong young boy who dreams of following in the footsteps of the father who abandoned him, and becoming a great Hunter. In this world, the Hunters are an organization of greatly esteemed adventurers, warriors, and general seekers of all kinds. Their prestige gives them access to resources across the globe, but earning a spot in their company requires passing a grueling test.

And so our initial variables are set: Gon must overcome a mysterious set of hidden challenges as he traverses the land, making use of the senses he’s honed while hunting in the forest, and gaining new allies with diverse specialties along the way. 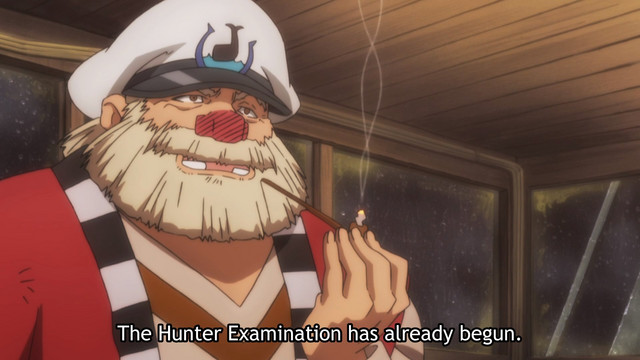 You might have noticed that through all of this exposition, Gon’s prowess as an actual warrior never came up. That’s because Gon isn’t really a warrior yet, or at least not a particularly driven or impressive one. Gon possesses great natural strength and agility, along with the assumed initial “superpower” of his animal-like senses, but his early victories rarely hinge on directly overpowering his opponents. After all, he’s a young boy within a den of lions; in fact, the Hunter Exam arc often relies on the fact that Gon is clearly a physical underdog for much of its dramatic tension. So how does Gon actually succeed in this arc?

The answer to that question is also the solution to a common problem within shonen stories. Shonen dramas of the Demon Slayer/Dragon Ball/Naruto variety tend to be most centrally about their fights, and the struggle to make those fights consistently exciting is one of the great challenges of the genre. Audiences want to see underdogs overcoming great odds to defeat overwhelming opponents, but how do you make that feel exciting, satisfying, and genuinely earned? 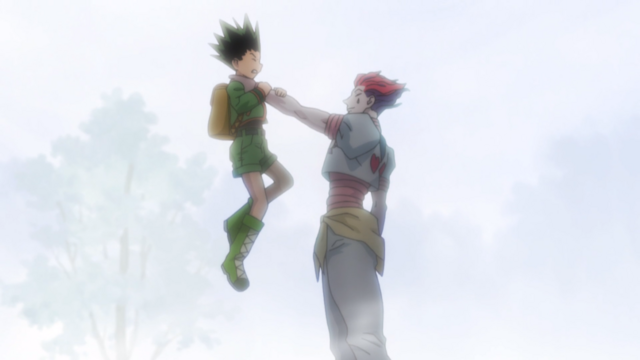 There are a variety of ways to solve this problem, ranging from infusing your battle with secondary emotional stakes, to animating the choreography of your battle with such fluidity that the flow of the fight is clear purely in motion. But Gon’s first conflicts come too early in this story to really possess much emotional resonance, and the show’s animation, while competent, can’t convey drama all by itself. Instead, Gon relies on a technique that respects the difficulty of his conflicts while overcoming them with strategically and dramatically satisfying flair: lateral thinking.

If you’re not familiar with the term, solving a problem with lateral thinking involves arriving at a solution that lies outside of the terms of the problem as presented, but nonetheless solves the initial problem. The classic example is the Gordian Knot: when Alexander the Great was challenged to untangle an impossibly tangled knot, he responded by slicing it apart with his sword. His solution “solved” the puzzle by refusing to engage with the problem as presented, and instead seeking an answer that circumvented the knot while still arriving at the needed solution. 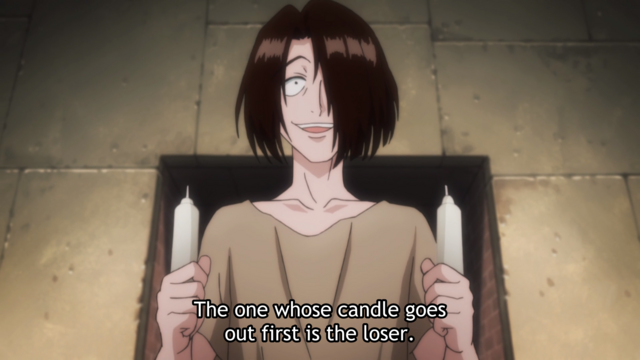 Gon cuts all sorts of Gordian Knots across the course of the Hunter Exam, consistently solving problems by thinking outside the box. Through this focus on lateral thinking, Togashi is able to consistently present challenges for Gon that seem completely insurmountable, but which he is nonetheless able to solve in a manner that feels both realistic and clever - a combination that adds up to “dramatically satisfying.”

At one point, Gon is presented with a challenge where he and an opponent must each try to keep a candle lit, with whoever’s candle goes out first being declared the loser. Of course, given Gon’s opponent was the one who actually prepared the candles, the two sticks are fixed, and Gon’s candle soon begins to burn with the raging intensity of the oil it’s been drenched in. Confronted with this swiftly burning candle, Gon realizes the terms of the engagement have changed. Now that his candle is burning so intensely, it no longer needs his support to stay alight - so he’s free to place it on the ground, dash to his opponent, and blow their candle out without his failing first. Gon turns a challenge that’s ostensibly about preparation and concentration into one hinged on physical agility, seizing a lateral solution to an impossible problem the moment it reveals itself. 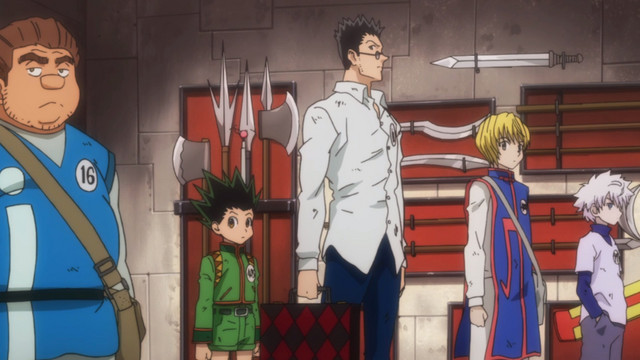 Gon continues to solve impossible problems with lateral solutions throughout this first arc. At another point, he’s grouped with a team of four other exam challengers, all of whom must collectively make a decision. In a room filled with menacing weapons, and with very little time to arrive at their destination, they must choose by vote to pass through one of two doors. One door leads directly to their destination, but will only allow three challengers to pass - the one next to it allows all five, but leads to a path that would take far too long to reach the finish line.

Gon’s solution circumvents the assumed challenge here (picking who gets to go through the three-person door). Instead, he urges his companions to vote for the five person door, at which point they use all the weapons surrounding them to bash through the corridor wall, and follow the three person route to freedom.

This style of lateral solutions works very well for outright puzzles, but Togashi is also able to apply it to Gon’s overt battles. When Gon is tasked with stealing a badge from a much stronger opponent, he immediately realizes he can’t actually beat his enemy - so he instead dedicates himself to stealing the badge at the precise moment his opponent is distracted, having committed their body to attacking their own target. When Gon must fight a stronger enemy in an actual one-on-one dual, he instead turns the fight into a mental battle - “you can beat me up, but I’ll never surrender. Are you willing to destroy me, or will you concede to avoid murdering a kid?” 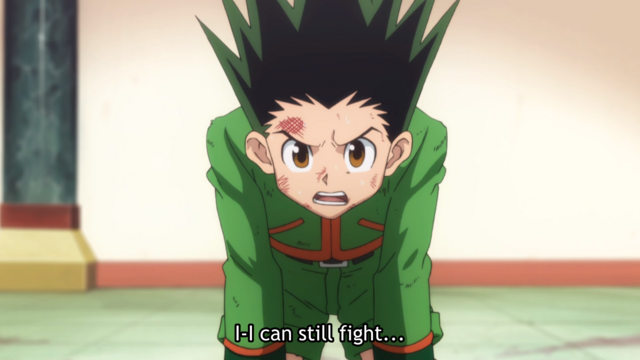 That one-on-one match also demonstrates another of Gon’s key “strengths,” and one of the defining factors of Hunter x Hunter - Gon’s willingness to put himself in serious, often potentially fatal danger for the sake of victory. It’s a novel choice that reaps great dividends both in terms of Gon’s personal journey and Hunter x Hunter’s reflections on its own genre… but that will have to be a topic for another article. It’s tough to constrain myself to one narrative technique per arc, but for now, we must bid the Exam Arc and its clever use of lateral thinking adieu. I hope you’ve enjoyed this discussion of Hunter x Hunter’s unique storytelling, and please let me know all your own favorite Exam Arc moments in the comments!

FEATURE: One Perfect Moment — Atmosphere as Drama in Anime