Remembering The Creepy Episode Of Digimon That Changed Everything

In the Digital world, sometimes your worst enemy can be yourself 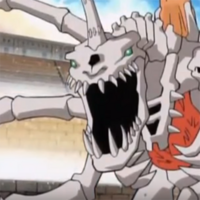 Digimon Adventure has no shortage of horror-themed monsters. You have Devimon, Puppetmon, the vampiric Myotismon, and even Piedmon, who operates on the logic that if clowns are inherently spooky, then a Mega Evolution clown must be, like, Mega-levels of spooky. But the scariest episode of Digimon Adventure surprisingly doesn't come from any Bram Stoker-themed bad guys. It actually comes from the main character Tai, who, in a moment of weakness, does something horrible.

The second arc of Digimon Adventure sees the Digi-destined travel to Server and it quickly becomes apparent that Tai is stressed out. And while this would climax with a lot of self-blame by the end of the arc, we actually see him spiral out of control early on in "The Arrival of Skullgreymon," a title that rivals The Texas Chain Saw Massacre in the contest of "Explaining exactly what the story is about." 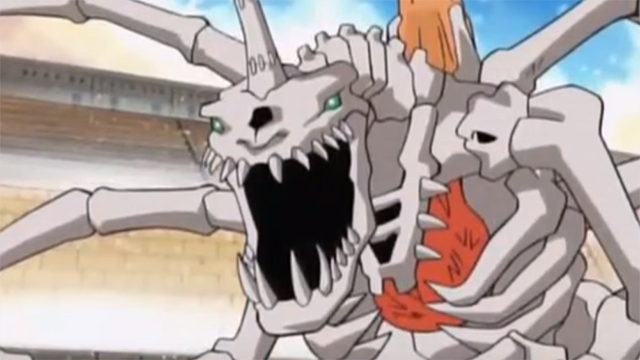 Tai has just gotten the Crest of Courage and our normally capable, goggles-wearing protagonist gets obsessed with seeing if his pal Agumon can Digivolve further. Upon being reminded that Digimon need strength to Digivolve, he begins to force-feed Agumon. Meanwhile, his friends remain at various levels of "Hey, dude. Maybe chill out." It's an uncomfortable scene because, you know, maybe don't do that, Tai. But also Tai and Agumon have been, for the most part, #brogoals. They're a great pair and now Tai is undercutting Agumon's trust in him and forcing him to do stuff he doesn't want. 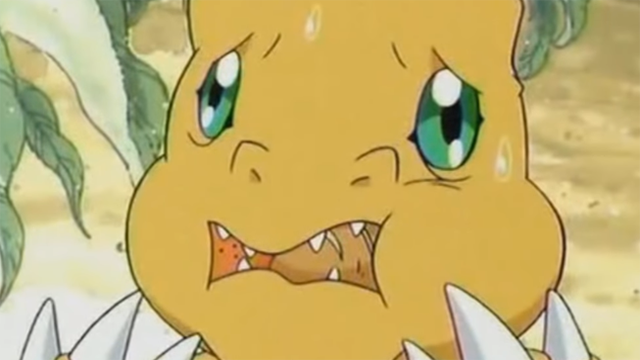 They later find themselves trapped in an arena by Etemon, where Agumon has to Digivolve into Greymon in order to fight another Greymon. Tai's Greymon isn't doing so well so Tai berates him and eventually puts himself in danger, further manipulating his poor Digital lizard friend. However, this causes Greymon to Dark Digivolve into Skullgreymon, an uncontrollable skeleton beast that easily beats up the enemy Greymon and the rest of the Digi-Destined's team.

In fact, it's only running out of energy that causes Skullgreymon to revert back into Koromon. If Skullgreymon had had a little more left in the tank, the Digi-Destined would've been anime-shaped splat marks on the side of the coliseum. And Koromon is immediately sorry that he lost control like that, but Tai eventually takes the blame. However, the precedent that this sets for the characters and the show's tone isn't resolved in this episode. In fact, it changes the show forever. 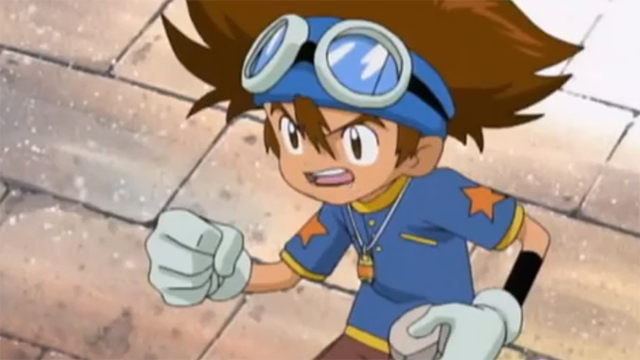 First of all, it shows the toll that being in the Digital World has taken on the kids. Being thrust into the roles of saviors of an entire universe isn't exactly the healthiest thing when you're in fourth grade, and as we see, some of the group eventually lash out in a variety of ways. For example, Matt becomes even more paranoid about his little brother and more concerned with the way that Tai is leading them all, leading to further (and violent) clashes between the two. And now we see that Tai is someone who can become obsessed with power and responsibility, even if it means not being very responsible about the well-being of his friends.

Secondly, it opens up a whole new world of Digivolving, one that actually makes turning into a stronger creature a liability. Digimon don't just immediately bounce back if you treat them awfully, and they'll react accordingly if you feed them with negativity. It makes you wonder how many "bad guy" Digimon are just Digimon that never got a fair shot at happiness, creatures that started out as a blank slate and were victims of such misery that they eventually Digivolved into more villainous, probably bat-like forms. 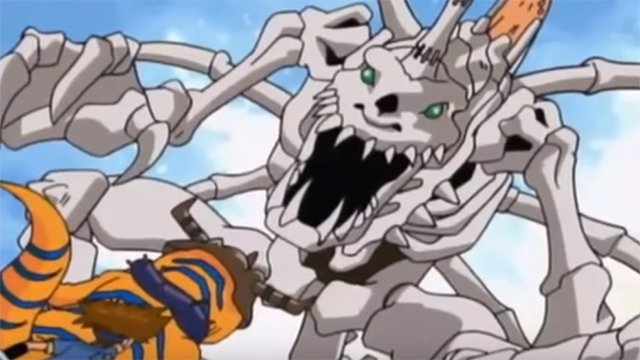 Lastly, even more than the increasingly strong parade of antagonists, it raises the stakes of the show. Yes, the Digi-destined have learned to trust their Digimon partners and vice versa, but their bond remains oddly fragile. It's not enough to say "Oh, Agumon Digi-volved when I got menaced by Shellmon. I see how this works." Like any relationship, it requires constant nurturing. Otherwise, you wind up with a Skullgreymon scenario, where you've become so focused on the wrong stuff that you've literally created a monster out of your, umm, monster.

Overall, "The Arrival of Skullgreymon" is an unnerving changing point in Digimon Adventure's history. It not only furthers Etemon's threat, but it also alters the way that we think about the characters. Digimon changes from being a show that's mostly about seven kids that learn that they have to save a world to a show that dives into how much responsibility we have toward the beings that we love. And it all happens due to a few scary moments. They say that the grass is greener where you water it, but in this case, the lizard creatures are remarkably less skull-like when you're nice to them. I'd buy a coffee mug that said that.

Do you remember this episode of Digimon Adventure? Are you a Skullgreymon Bro or a Metalgreymon Buddy? Let us know in the comments below!

FEATURE: A Tonal Change Gave the New Digimon One Of Its Best Episodes Yet