Mario, Sonic and friends are back at it again at the 2020 Tokyo Olympics! 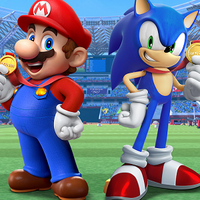 It’s about that time again where athletes from around the world are preparing to compete for glory at the 2020 Olympics in Tokyo. Meanwhile, the games are already underway for Sonic, Mario and their friends in the latest installment of their long-running series based on the historical sporting event. This Olympic clash of gaming mascots is being taken right to their country of origin in Mario & Sonic at the Olympic Games Tokyo 2020 for the Nintendo Switch. And if the name “Mario & Sonic at the Olympic Games” is any indication, you know exactly what kind of game you’re getting into. 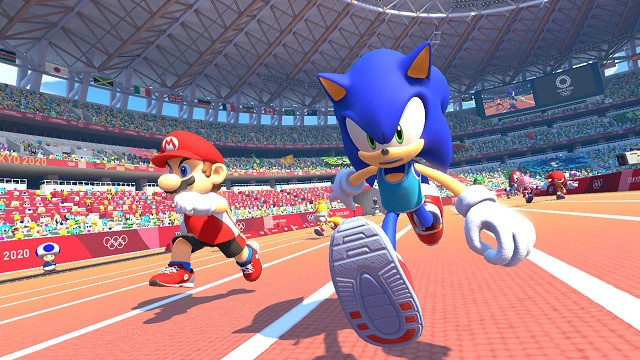 As with previous titles, up to 4 players can choose from a vast array of characters from both the Mario and Sonic franchises to compete in a collection of more than 30 minigames inspired by actual sporting events in the upcoming Olympic games. These include anything from 100m dashes, badminton, and Olympic diving. You can even participate in some of the newest Olympic events such as skateboarding, karate, surfing, and climbing. The game also includes a story mode in which Mario and Sonic are sucked into a retro gaming system and must compete in the 1964 Tokyo Olympics to escape while their friends on the outside compete in the 2020 Tokyo Olympics. 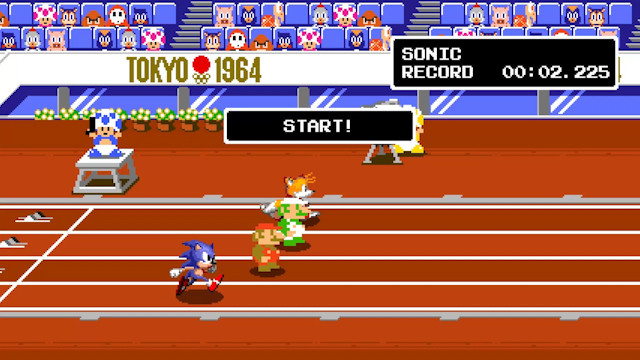 New to the series are the pixelated sporting events that have you play as the earliest game iterations of Mario, Sonic and others. These minigames are vastly different from the traditional 3D challenges, as they have you playing charming arcade versions of certain events. The Dream Minigames also make a comeback, in which you and your fellow players take each other on in wacky competitions that are less attuned to the grounded nature of Olympic events.

If you’ve been keeping up with Mario and Sonic throughout their Olympic escapades, then you’ll probably know what to expect from their latest outing. You have your eclectic collection of simple yet challenging minigames all wrapped up in a homey crossover package. Surprisingly fluid motion controls and accommodation for all controller types make the game pretty accessible to anyone, but nothing ever truly pushes the envelope in terms of execution. 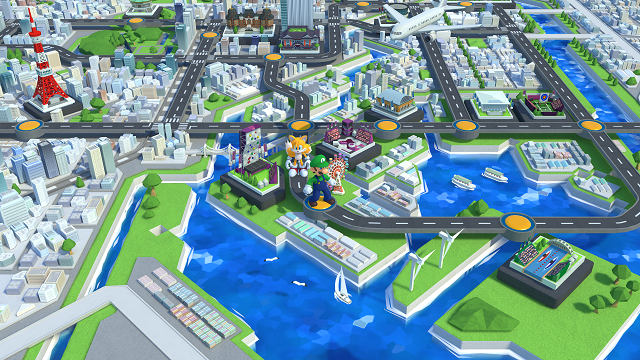 While having a distinct Japanese flavor becoming of SEGA’s home country, Tokyo 2020 offers up a lot more of the same. It’s easy to pick up and share with your friends, and there are plenty of games to choose from. It’s no Mario Party level of intense, friendship-ending competition, but it’s entertaining enough to break out on game night and a serviceable time-killer when flying solo.

One thing I wasn’t exactly used to was having to select individual games. Tokyo 2020 features a Quick Play option that lets you dive into many of the minigames this title has to offer. Yet I found myself stumbling at the end of each one having to go out and select a new character, then select a game, then back out to select a new game and a new character all over again. Maybe I’m just too used to the party game formula that more or less offers me a grab bag of challenges with each run, but a little more structure and a little less menu hopping would’ve really helped toward a more seamless experience. 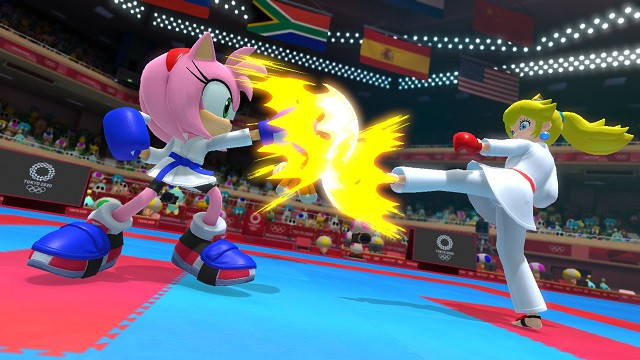 This latest installment isn’t without some noticeable spots of higher-than-average enjoyment, thankfully. While some minigames are pretty straightforward, there is a surprising sense of variety when it comes to some of the newer additions featured in Tokyo 2020. Skateboarding and Karate were some of my favorite events to play, as they both require a little more skill and creativity in their execution. The retro games feature a very appealing aesthetic whose gameplay and style are sure to please fans of the old classics. The Dream Minigames, as with previous installments, also provide brief snippets of gameplay that could honestly stand to be part of their own title. And a markedly better one at that. 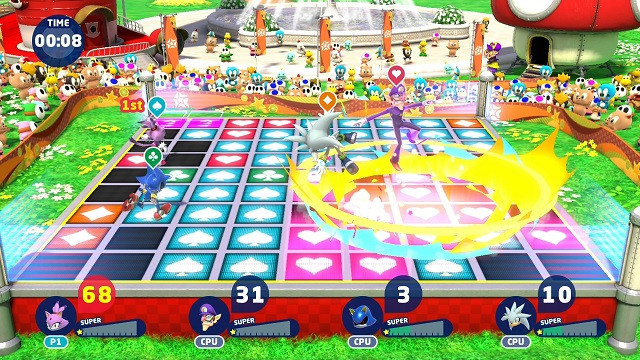 Take “Dream Racing,” for instance, a returning staple. As the name suggests, you race on a crazy futuristic track using a hoverboard. You can perform tricks to boost your speed and even pick up items to trip up your opponents, like the dreaded Red Shell that Mario Kart fans will surely recognize. The newest addition is Dream Karate (my personal favorite, pictured above), which has you kicking and punching opponents with flashy special moves in order to gain territory on a game board. Then you have another comeback in Dream Shooting, where you run around an obstacle course shooting targets to rack up points.

As per the Mario & Sonic standard, the Dream Minigames are just fun little pit stops that provide a lovingly-wacky spin to shake up what is typically a by-the-numbers love letter to the upcoming Olympics. This deviation from the otherwise semi-realistic minigames are always, if nothing else, refreshing twists to an otherwise formulaic series. 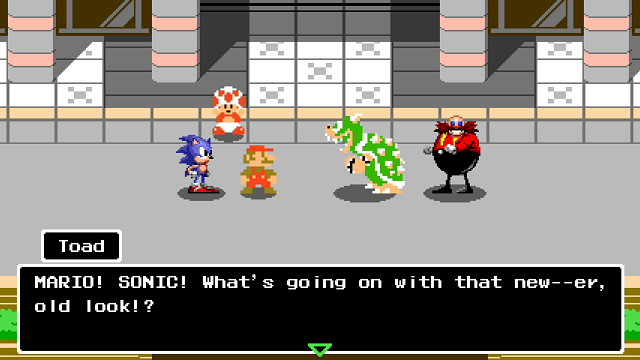 And believe it or not, I was able to squeeze some enjoyment out of the story mode as well. While the narrative itself is pretty tedious and unremarkable (the excuses everyone makes to play Olympic events instead of rescuing Sonic and Mario get lamer and lamer), you’re able to visit fantastical versions of famous Japanese landmarks and tourist attractions. As you progress, you can unlock new games and characters to add to your roster.

But my favorite part was actually finding out neat little historical tidbits. Scattered throughout certain levels are NPCs and shiny pick-ups that provide brief facts about either a Japanese historical landmark or fun facts about Olympics history in and around Japan. I honestly had a lot of fun scouring different areas just to learn a new fact about the Olympics. 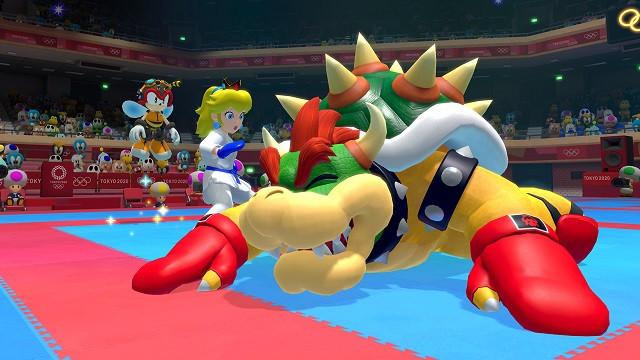 There have been several installments of the Mario & Sonic at the Olympic Games series that we've seen before, and while it was a neat idea way back in 2007, it’s since become a standard copy/paste affair that consistently hits a middle ground of “just fun enough.” In that sense, Tokyo 2020 isn’t terribly different from its predecessors. The traditional Olympics challenges are still charming enough while never being too innovative or labor-intensive. The Dream Minigames and retro arcade bits are nice little pops of color, and Story Mode was a lot more educational than I thought it was going to be.

It basically boils down to whether or not you enjoy Mario and Sonic’s Olympic outings to begin with. If you enjoyed the previous ones, you’ll enjoy this one. If you’ve never touched one, it’s as good a place to start as any. Anyone looking for a more legitimate and exciting party game experience may want to look elsewhere, but you could certainly do worse. 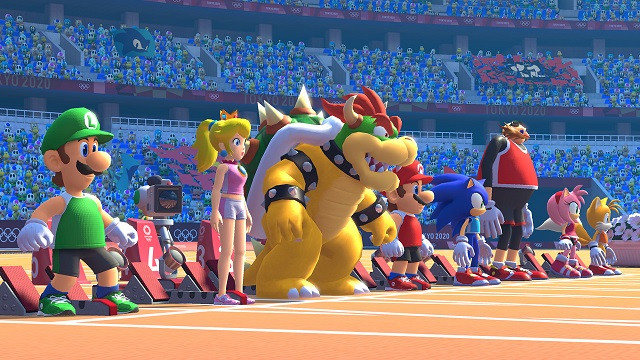 Mario & Sonic at the Olympic Games: Tokyo 2020 is a lot like watching the actual Olympics every four years. It’s there for you to check out for a little while. You’re not missing out on much if you don’t watch them, but there’s some fun to be had if you do.

+/- Not terribly different from any other Mario and Sonic title

- Jumping from game to game can be clunky

What are some of your favorite new minigames? Looking forward to the real Olympics in Tokyo this summer? Comment below and let us know!

Sega Games and Sega Interactive to Merge Into Just ‘SEGA’