Can One Punch Man: A Hero Nobody Knows Punch its Way to the Top?

We've got the deets on Bandai Namco’s upcoming fighting game! 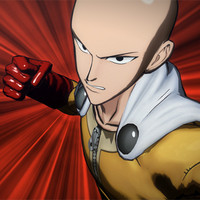 One-Punch Man is a creative take on the superhero genre: what if the hero was so strong, nothing was a challenge to him? Saitama’s antics of always being disappointed in his world shattering powers being wasted on villains other heroes can barely touch gives the show most of its heart and character, but how do you translate that sense of apathy to a video game? Since fighting games are all about flashy action and pulling off cool combos, moves, and comebacks, playing as Saitama against other heroes and villains seems pretty silly; after all, he’s just going to win in a single punch! Bandai Namco have come up with an interesting twist to this: you have to survive long enough for Saitama to show up before you can see his awesome power on display in One Punch Man: A Hero Nobody Knows! While an intriguing idea, how well did it play? Well, I got to play the multiplayer beta of the game on the XBox One, and I’ll let you know… It’s complicated! 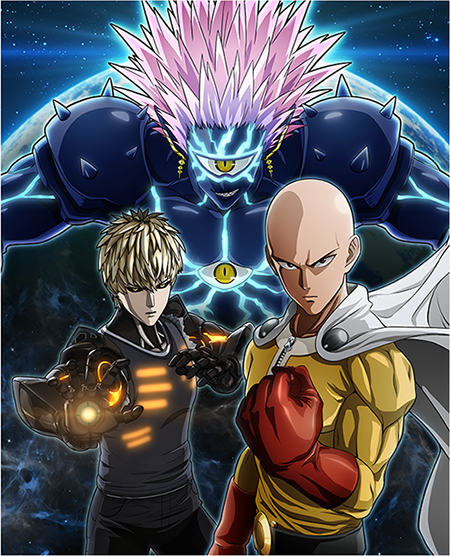 The multiplayer beta offered players three options: a local mode against the computer, a Saitama version of multiplayer, and a non-Saitama version. Regardless of the version you select, you’re given the choice of building a team of 3 characters, with the restriction being that modes that include Saitama force him to be your 3rd and final choice, and that he will only arrive in battle after 250 seconds have elapsed. If that seems like a really long time, it is! After selecting, players are taken to the battlefield, where they fight in 3D combat arenas with free movement, being able to swap between the fighters they’ve selected, giving players some options towards team composition, styles, and knowing when to swap characters in and out to protect them or push an advantage.

Controls are fairly simple: characters move with the left analog stick, and the rest of the controls are based on simple button inputs. There are no complex commands for special moves, and instead characters can perform moves by consuming the “Move Meter” by holding Left Trigger and combining it with a face button for various types of attacks. When the meter is high enough, characters can enter an enhanced state or stance change by pressing R3, and pressing it again for most characters executes an impressively cinematic super move. Characters can also dash freely by holding Right Trigger, or directly towards their opponent with L3, giving them a boost of speed to close gaps or take advantage of knockdowns and wallbounces. 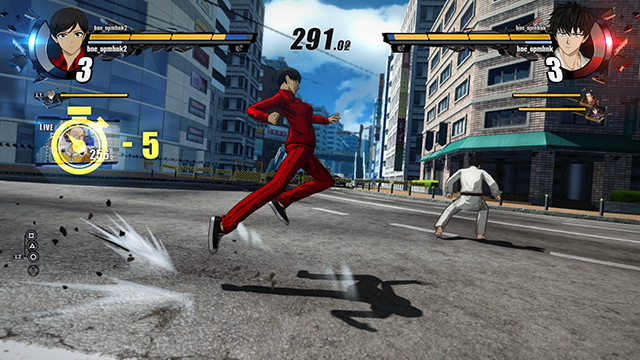 In terms of control, the game felt fine and functional. There was never anything overly flashy in the gameplay, and the control scheme is simplistic and allows players to learn the rules fairly quickly. There are only four buttons in the game: a weak attack, a strong attack, a block, and a jump, and combined with the more specific buttons mentioned above, creates the entire toolkit you have to work with as you play. Simplistic controls don’t always mean bad, and many fighting games take advantage of simple controls to hide a lot of depth.

In my time with A Hero Nobody Knows, I was left thinking that the game has some interesting systems, such as timed perfect dodges, combos based on juggling and wall/zone bounces, and finding ways to make various moves flow into one another. But there are some places where the game seems fairly as simple as it presents itself, without many hidden systems or unique quirks that you might expect in other anime based fighting games. 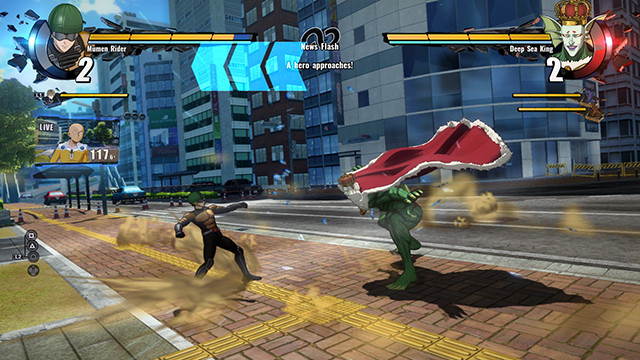 Since the beta was only multiplayer, I can’t speak to any campaign or single-player based content, but it does seem as though players will be able to create a character of their own to take into battle; when the beta started, we were offered two heroes, one a ‘speed’ based one, and the other a ‘power’ based one, who borrowed various moves from other heroes to create a mixture of unique moves. In practice, it felt somewhat odd to play as a generic character when the One-Punch Man characters were also readily available, except in the sense that they had a combination of moves from other characters that would otherwise not be seen together. I found myself choosing the avatar character a lot during my time playing, mostly because I found them easy to use and somewhat simple to play compared to characters like Tatsumaki, although I would hesitate to say any character is really difficult to play as.

Instead, I just found that most characters played somewhat the same, with certain extremes like Sea King, Silverfang and Tatsumaki being the most different. Otherwise, Genos, the avatar, Sonic, Mumen Rider, and Atomic Samurai all felt fairly interchangeable, and despite the game listing their hero ranks, they didn’t seem to matter at all in gameplay. When my player character C rank avatar took out Sea King with a set of consistent wallbounce combos, I knew that there might be something… off about the game. The issue is really not one of gameplay (it plays great!), but theme. 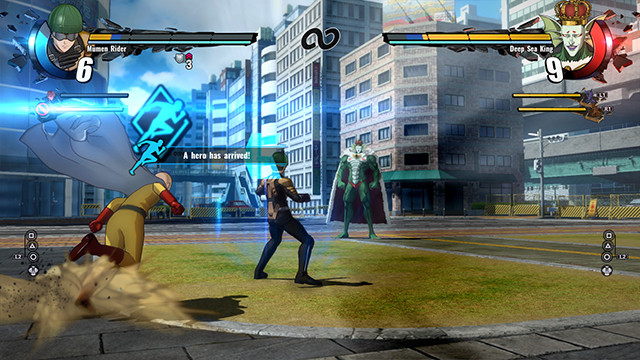 During my time playing the beta, I actually only got to play as Saitama twice. Once was during my first match against the CPU, in which I was mostly just figuring the game out and doing very little, which allowed the timer to run out and Saitama to appear. The second time, I had to specifically go out of my way to not win the match too quickly for him to show up again, meaning that I spent the tail end of the match purposefully avoiding my opponent simply to get Saitama to appear, rejecting the CPU’s attempts to have me defeat it by rushing right up to me and doing nothing, daring me to just end the fight. The problem isn’t even that Saitama takes too long to show up; you can actually shorten his timer by doing successful combos, perfect guard dodges, and special moves, but what this ended up resulting in was a type of score: how low could you get Saitama’s timer before you defeated your opponent?

The closest I came against another player was 15 seconds, and they had a single character with a sliver of health left, meaning Saitama would have simply been a cruel joke more than a reward at that point. Playing in ‘Saitama’ mode and not selecting him makes the imbalance even more obvious, as you end up with one player with 3 available full power characters against someone who has more or less handicapped themselves, with the promise that they may be rewarded for it if they can survive. Against everyone I played while doing this, none of them even came close to summoning him, let alone winning. 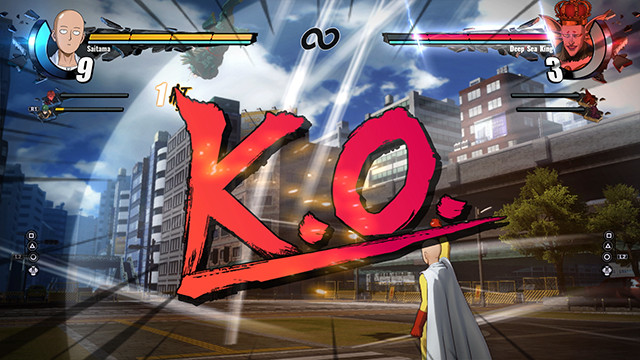 For a series about such an interesting protagonist and lots of cool heroes and villains, the themes of One-Punch Man actively work against it being a compelling fighting game, which is most visible in the sense that Saitama is perhaps the biggest problem in the entire game. While Saitama is fun to see on the screen, he doesn’t actually “work” in the game. Saitama is obviously impossible to defeat, and a simple light attack instantly defeats every opponent. While he can perform a super, it’s mostly just to see the impressive cinematic rather than needing to pull it off for any reason. In some sense, this is a fighting game based on an anime that is actively hampered by its protagonist: everyone wants to play as Saitama, but playing as Saitama isn’t actually all that fun, and the other characters are entertaining but they aren’t Saitama, a point the show and manga have made numerous times. I think this might be why I didn’t care about playing the generic player character: none of the other characters were Saitama, so did it really matter who I was playing as?

A Hero Nobody Knows feels like it has reverse Poochie syndrome: when Saitama isn’t on screen, everyone’s asking where Saitama is, but they also actually WANT him to be there. When playing modes without Saitama, the game works quite well as a fun, punchy fighting game, but the characters feel oddly generic in these circumstances. While it lets you do the ultimate anime game pleasure of “what would happen if Mumen Rider fought Speed of Sound Sonic,” characters that are obviously more powerful than others never really FEEL more powerful than others. Mumen Rider should, obviously, be the weakest character in the game, but he’s more than capable of taking down any character with ease, which somewhat breaks the fantasy the game is trying to sell. 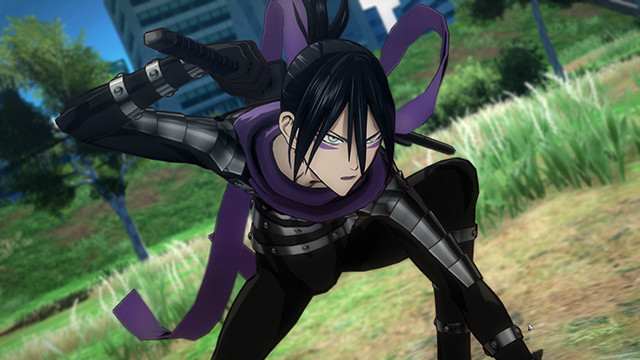 Thematic issues aside, the game looks fantastic! Character models are well rendered and look like they should, voices are well done, and the game even has fun little pre-battle dialogues where characters that have some sort of history will trade verbal barbs, even if they aren’t on the same team. Mumen Rider and Sea King will trade words, and you can even recreate the “Sassy child” scene if Saitama is against Tatsumaki. Entire team scenes can play out in various circumstances as well, such as a team of Saitama, Genos, and Silverfang that has the older martial artist trying to recruit the two of them to his dojo.

While the game’s main thematic draw is somewhat dissonant, you absolutely get what you bargained for in terms of character theme and interaction, and we can only assume that the singleplayer components missing from the beta will take full advantage of these features. Frankly, A Hero Nobody Knows almost seems like a better single player experience than multiplayer, letting players explore the One-Punch Man story and engage in some video game exclusive content and scenes, than it is as a competitive versus fighter. Players can expect to have fun duking it out, and if you’re a big One-Punch Man fan, you’ll probably find stuff to love here, but the game system isn’t deep enough to draw in non-fans or curious fighting game players. 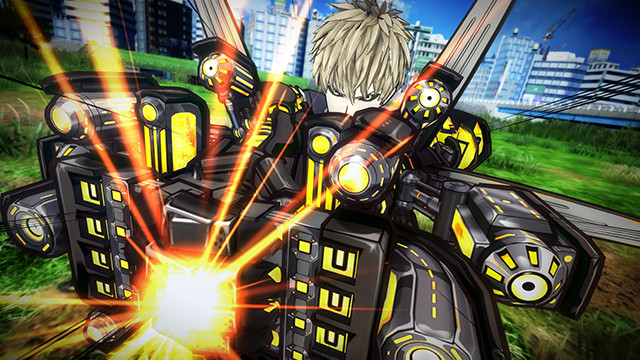 When our time with the beta came to a close, we found ourselves feeling a bit like Saitama: unfulfilled. The game plays great, and online versus other people was smooth and had very few hiccups, and everything about it shouts “solid but not game changing fighter.” The biggest problem, though, is that the theme—and Saitama—don’t work the way it should. Perhaps we’ll see what the full game has to offer, but for now we’re cautiously optimistic, hoping we can find a game worthy of our abilities and powers to use. We’re looking for a game that offers us a challenge and allows us to feel amazing when Saitama shows up to save the day. As it is, right now we mostly just feel like he does: Ok.

Are you curious to play One Punch Man: A Hero Nobody Knows? Any characters you’d like to see in the game? Let us know what you think of the game in the comments!

Tags
one-punch man, one punch man: a hero nobody knows, games, gaming, bandai namco
« Previous Post
FEATURE: The Love That Binds Us: A Report from the Kyoto Animation Memorial Service
Next Post »
Solving Mysteries Across Time Is a Blast in YU-NO
Other Top News
3 Comments
Sort by: