Yui Hirasawa Is The Glue That Holds K-ON! Together

Enjoy all the fun things that are fun on your birthday, Yui! 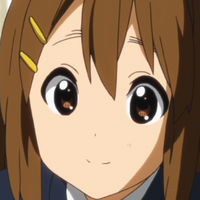 It’s been a good time to be a K-ON! fan recently. The anime celebrated its 10th anniversary earlier this year, a new manga, K-ON! Shuffle began publication last year, and now it’s time to celebrate the birthday of one of the biggest aspects of K-ON!. That’s right, it’s the lead guitarist of After School Tea Time who once famously said, “fun things are fun”, Yui Hirasawa’s birthday! If we were to take the timeframe of the anime ending in 2010, Yui would already be out of college, probably done multiple tours with the rest of After School Tea Time, and sold out the Budokan as well. Does that mean she’s gotten any less goofy or ditzy over the years? Well, that would still be up in the air. However, for Yui’s birthday, let’s talk about how she’s one of the key pieces that holds not only the show together, but the Light Music Club as well. In sports, there’s a term called a “glue guy/gal” where they’re the person that gets a team to stick together, so how does Yui, someone who is perceived to be a goofball and somewhat lazy, capture that same spirit? 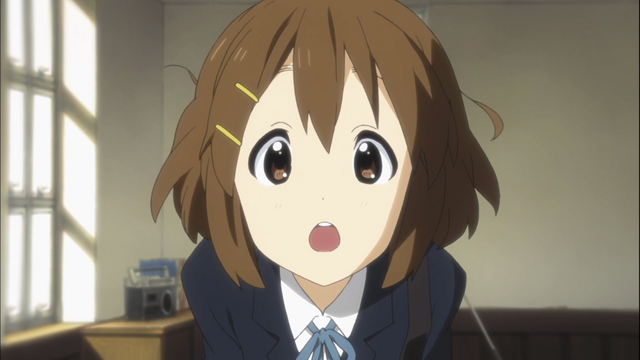 On first glance, it’s probably easy to think that Yui is someone who doesn’t want to put effort into anything that would challenge her. She’d rather cruise through life and have things come easy to her. Yet, it’s actually the opposite. Sure, it can take some time for her to get the drive to tackle something challenging, which when it comes to school, happens to pretty much everyone. Despite the fact that she was a student that cruised through school before she got to high school, if she applies herself, you can see the flashes of brilliance that show how intelligent she is.

Please don’t say Yui is lazy, instead let’s look at her as someone who at times has trouble fueling her creative desires. She just needs a push from someone in a direction and once that happens, she can come up with a ridiculous song like “Gohan wa Okazu” or come up with an idea that allows for the rest of the group to become even better. That’s probably one reason that she can come off as lacking energy is she just can’t figure out the best ways to harness it and then lets it slip away from her. 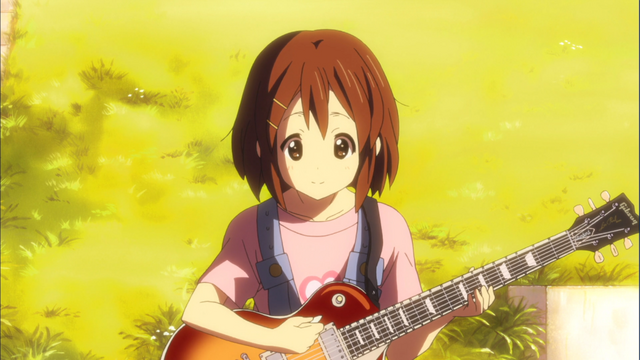 This also extends to her motivation to become better at playing guitar. You’ll certainly see many scenes of her and Ritsu lamenting the idea of practice, but when it comes to becoming a more well-rounded guitar player, it’s possible she practiced more than anyone. That often comes at the detriment of her studies, but to go from where she was at the beginning of the series with having no experience, to by the end being pretty good, Yui put in the work. Plus, despite her initially acting as if she was a good guitar player in front of Azusa, she shows humility by having Azusa teach her various techniques. It’s clear she never wanted to have her playing be a reason the group could be brought down.

So, how does all of that tie into her being someone who is able to keep the rest of the Light Music Club together? For starters, her lackadaisical attitude can be the comic relief that some other members of the group might need after a hard day at school. That will, of course, usually come with frustration from Azusa or Mio, but that also helps the girls unwind in a way that doesn’t make them constantly swamped with the stress or anxiety that comes from trying to keep up with their studies and write new music. 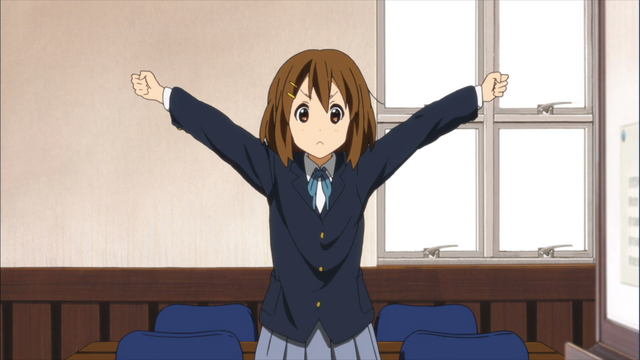 Yui will also go up to strangers and get help for the group if they need it. For example, this happens in the first OVA when the rest of the girls are nervous around the other bands they will be performing with. Yui on the other hand, waltzes right up to them and asks them about their lighting and stage set ups with no problem. There really isn’t a shy bone in Yui’s body, but that’s also helpful when the group gets into tight situations like that. They need someone who can ask for help and not find that to be a weakness or that it would be bad.

When it came to trying to find the lead singer for the group, Yui was pretty much first in line to volunteer. Although, she might have initially wanted to just be in the spotlight and up front, but it’s pretty clear that she was a good candidate to be one of the lead singers. She doesn’t get nervous in front of crowds and is able to perform impromptu skits in between songs. While, she did bring the group a bit of trouble during their first two school festival performances by blowing out her voice training to sing and forgetting her guitar, Giita, there’s never a moment where it feels like she’s messing up like this on purpose. These kinds of actions fill her with regret because she doesn’t want to hold back the group in a way that’d be detrimental. 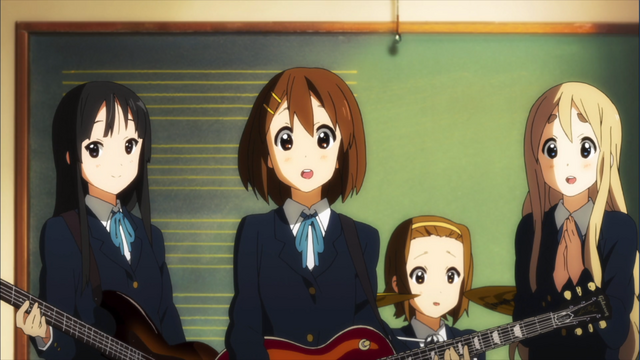 Even though she can be a little too touchy feely with Azusa, Yui is adamant about making sure she feels welcome with a group she came into later than the rest. Especially later in the series when Yui realizes that Azusa might be feeling lonely because she has no one else in the club her age or when they’re about to graduate. It’s Yui who spearheads the idea of making a song for her and making sure it’s good which culminates in such an emotional scene at the end of the series. We can’t forget about how she bought Azusa a turtle so she could have a friend in the club, either.

Your friend group should have a Yui. Every group in general should have a Yui. Someone that can break up tension, push your group forward in ways you might not have expected, and will do whatever they can to make sure you and everyone else is better constantly. For Yui’s birthday, let’s all celebrate by trying to elevate each other and be a little goofy. Or you can eat some rice and talk about how it’s the greatest food ever. Whichever you want.

What are some of your favorite Yui moments from K-ON!? Which of her songs do you think is the best? Let us know down in the comments below!