You Owe it to Yourself to Check Out SaGa Scarlet Grace: Ambitions

Heroes, cling to your ambitions! 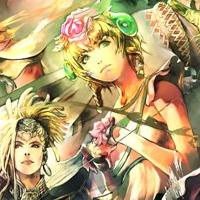 You’ve probably never heard of SaGa Scarlet Grace: Ambitions, but it has a history. Back in the days of the Super Nintendo, as Final Fantasy defined modern role-playing games for consoles, Akitoshi Kawazu and his band of stalwarts created the SaGa games. The first entry for the SNES, Romancing SaGa, featured an open world and eight characters to choose from. In 1992! Only one year later, Romancing SaGa 2 let you play as multiple generations of an imperial dynasty whose strength and capabilities evolved systemically based on the player’s decisions. These games came to feature dynamic difficulty scaling, multiple outcomes for quests, battles that de-emphasized the conservation of health points in favor of all-out brawls.

This experimentation came with a kind of woolliness that you would never find in a Final Fantasy or Dragon Quest game. Stories of random encounters bolstered into demigods by the player fighting too many battles, final bosses that required advance knowledge to defeat, entire questlines that your character could be locked out of by earning too many hit points or making a choice in the wrong place at the wrong time. These stories kept me away from Kawazu’s games for years, fearing that they would be too opaque for me to understand. These fears are not unfounded! It was that opacity that led the SaGa games to gradually disappear, remembered only by hardcore fans and games historians. 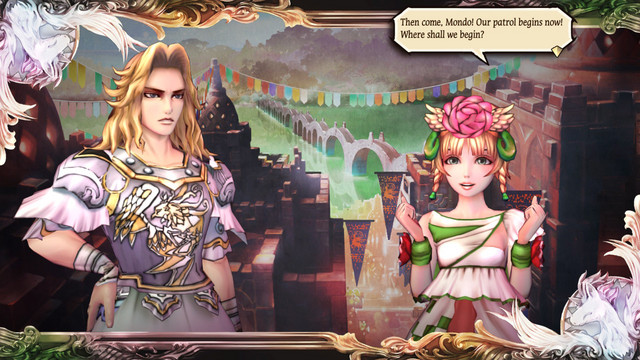 Compared to the SaGa games of old, Scarlet Grace: Ambitions is shockingly minimalist. Instead of eight characters to choose from, you have four. The world is large and open, with plenty of opportunities to go off the beaten track. But the world map is the only physical map that you can explore. Towns are presented in small and sparse menus, with just one or two people to talk to. Dungeons do not exist. Some events on the map will trigger dialogue, with a choice or two if you are lucky. Others may present you with the opportunity to fight in turn-based battles. That's the game.

“Why,” you might ask, “would anybody bother to play something like that?” Would it change your mind if I said that I far prefer Scarlet Grace: Ambitions to the older SaGas I’ve tried? Romancing SaGa 2 and 3 are fascinating video games, but practically require an instruction manual and guide to avoid locking yourself out of the best bits. Even playing them on their own terms, travelling from town to dungeon and back quickly becomes tedious. By comparison, Scarlet Grace: Ambitions’ abstracted world map allows you to sprint from location to location without much trouble. The decisions you make on this map change the world with an immediacy that’s surprising even when compared to today’s more advanced three-dimensional video-game worlds. 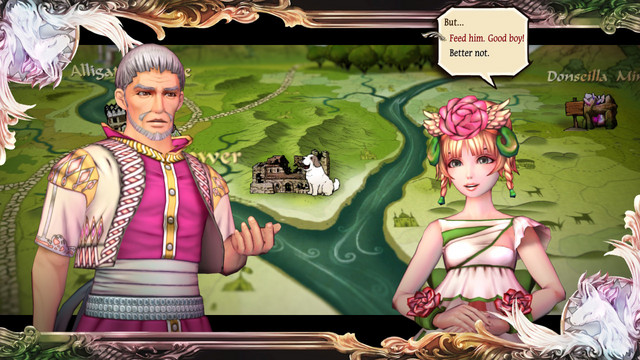 Let me tell you a story about how my character, the princess Urpina, found a boat. Adrift in an province ravaged by pirates, she and her friends cleared a nearby forest of monsters. Suddenly a swarm of bees came from the forest and crossed the nearby river. Where could they be going? Urpina fought her way through a monster-infested overpass to find a forest on the other side, which she cleared of monsters. A swarm of bees crossed the river once more, from the opposite direction. Urpina continued to explore the province, recruiting bandit royalty who joined because they were bored, fighting in ritual combat in a temple. It wasn’t until later that she returned to one of the forests, where the bees had left behind some honey. Honey that the nearby innkeeper wanted for the mead that raiding pirates desperately wanted. When the pirates came by, Urpina stole their boat. That was that.

There is never a moment in this sequence when the player is told exactly what they need to do. Urpina does not need to find a boat to progress. Nobody says to her “if only I had some honey!” Snatching the pirate boat comes solely out of the decisions you make exploring that area, a happy circumstance of seeming coincidences the developers laid down like bowling pins. In a more elaborate video game, it might take ages running between forests to check for changes. Scarlet Grace: Ambitions shows you the immediate macro-impact of your decisions as they radiate like lightning across the map, terraforming the world around you. When it works, it’s amazing! 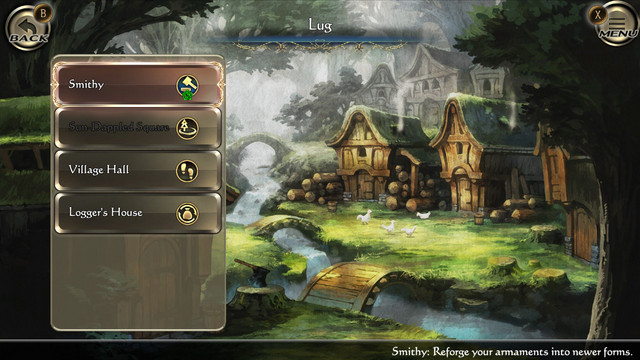 This ethos is reflected in the battle system as well, which sharpens the already tricky SaGa fights of old to a bleeding edge. In older games in the series, things would just happen during battles—characters would learn new moves, enemies would do something horrific and unpredictable. Scarlet Grace: Ambitions maintains some of that randomness, with characters “glimmering” new skills at random just like in those earlier games. But there’s a greater focus on transparency, not just with enemy names being listed before an encounter but also with a constantly updating timeline at the bottom that lets you know what attacks enemies will be using, and roughly how powerful they are. All abilities draw from a single mana pool that slowly increases as the battle continues; as your options expand with each turn your opponents are given even more firepower with which to destroy you.

Victory is born of both planning and careful improvisation. You might be tempted to eliminate a foe sandwiched between two of your characters, triggering a chain reaction of United Attacks that wipes out the opponent. But what of the wizard at the end of the timeline, slowly preparing to Call Lightning and obliterate your party? Do you spend a point on your Fencer to try and put the wizard to sleep, at the risk that the attempt is unsuccessful? It’s a system that mashes together Grandia’s timeline manipulation, Hearthstone’s mana economy, Into the Breach’s transparency and Shin Megami Tensei Nocturne’s sheer cruelty. The prototype sports car of JRPG battle systems.

Of course, this is not enough for some people. I do not begrudge them this. After all, Scarlet Grace: Ambitions lacks so many of the things that folks love about the genre. Dragon Quest’s charming villagers and attention to detail. Final Fantasy’s cinematic setpieces. Shin Megami Tensei’s thick atmosphere. Persona 5’s lovable band of misfits. Yakuza 0’s vast neighborhood of sidequests and minigames. The English version of Scarlet Grace: Ambitions was gifted a fantastic localization by 8-4, which gives the world and cast compelling texture. But this remains a game where much of what makes a JRPG a JRPG is not there. If this bothers you, Scarlet Grace: Ambitions may not be for you. 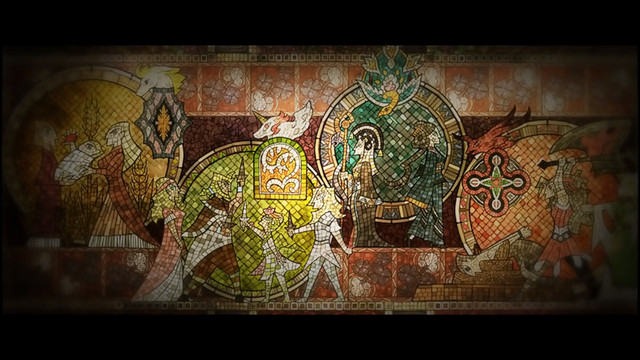 On the other hand: for the SaGa fans who have been waiting for this game on tenterhooks. For the curious fan of tabletop role-playing and B-games for the PlayStation 2. For those who want to be on the bottom floor of a future cult classic. SaGa Scarlet Grace: Ambitions may be a game for them, or it may not be. But there certainly isn’t anything else in the world like it.

+ Vast if abstract world to explore, with chances for genuine choice and consequence

+ Hugely replayable, courtesy of additional features unlocked on future runs as well as player characters with different focuses and objectives

- Lacks on purpose many of the features fans of JRPGs expect, like towns and dungeons

- Noticable loading times, even if reduced from the Vita original

Are you playing SaGa Scarlet Grace: Ambitions? What are your experiences with the series? Let us know in the comments!

Adam W is a Features Writer at Crunchyroll. While he waits for the new Etrian Odyssey game to be announced, he sporadically contributes with a loose coalition of friends to a blog called Isn't it Electrifying? Follow him on Twitter at: @wendeego