One Piece's Valuable Lesson on Being True to Yourself 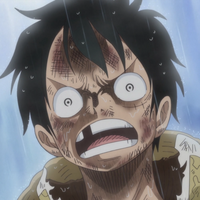 Whole Cake Island is a land of deception. Big Mom presents it as a utopia where people of all species live in harmony, when in reality they're all held hostage to her whims and cravings. The wedding that drives the entire arc is nothing more than a trap for Big Mom to expand her power. Even the land itself deceives, as the trees rearrange themselves to lead interlopers into traps and dead ends while the souls powering them laugh at people's misfortune. In such a dishonest place, it's no wonder that the people there are also forced to hide who they are. Whether it's to protect themselves or the ones they love, people throughout the arc have masked their true selves out of fear of what could happen otherwise. 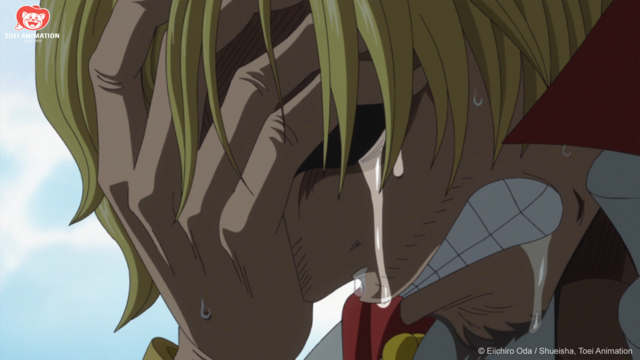 In one of the arc's most heart-wrenching moments, Sanji has to play the part of the arrogant prince in a desperate bid to keep the other Straw Hats from risking their lives to save him. Necessary as he believes it is, attacking the captain he swore to follow tears him up inside. As he continues on, feeling trapped by his powerful family, his one source of solace is the apparent kindness of his fiancé, Charlotte Pudding. She’s his one light, his hope that he’ll still find happiness in the future. Little does he know, he isn't the only one putting on an act.

Pudding's reveal that her kindness was just an act to lure Sanji into a trap comes as a shock, but not as much of a shock as when we see that her cruelty was equally fake. Instead, it was her way of protecting herself from pain. In spite of Big Mom's professed tolerance for all species, Pudding grew up in an environment of casual insults and mockery directed at her third eye, with her own mother being the worst offender. By the time we meet her, she's taken those insults to heart and is completely convinced that nobody could love her for who she is, so she hides behind a cruel facade that keeps everyone away. After all, nobody can hurt you if you never let them in. 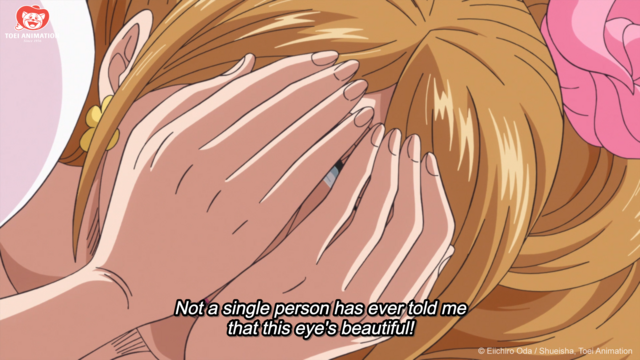 Pudding isn't alone in her shame, either, as even the mighty Katakuri feels the same pressure to hide who he really is. Though his unbeatable warrior persona began as a way to scare off anyone who would hurt his family, his act ultimately became his whole life and his real self something he's ashamed of. It's only in private that he lets himself be the real Katakuri, the one with the giant mouth who loves laying around and eating doughnuts, instead of the stern older brother. Even his closest siblings seem to have bought into the myth, completely missing the real person behind it. It's telling that when they discover that Luffy defeated him, Oven and the others seem more outraged that Katakuri's undefeated record was broken than concerned for their brother. He may hide it well, but Katakuri's persona is just as fake as Sanji's and Pudding's.

Amid all of the lies and shame, we have Luffy. Throughout One Piece's hundreds of episodes, Luffy has always been open about who he is with no fear of scorn or judgment. Luffy understands on a basic level that you can't truly be free if you let the world around you force you into a role, and freedom has always been his goal. His straightforwardness extends to the people around him, as the one thing Luffy has always demanded of his friends is that they be honest about how they feel. He did it with Nami, he did it with Robin, and now he does it with Sanji. 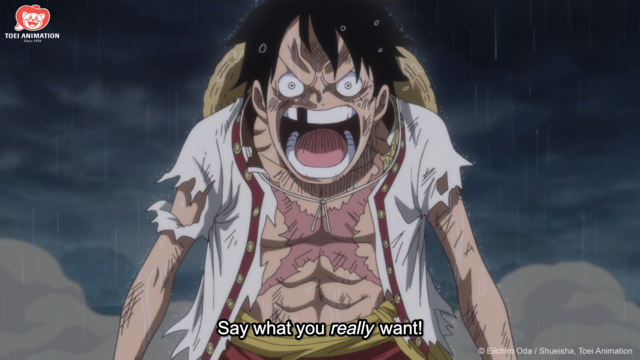 When they finally reunite after their fight, Luffy has one response to all of Sanji's excuses for why he can't return: "Say what you really want!" These few words finally shatter Sanji's calm facade as he finally admits that he does want to return to the crew, but also wants to save his family and doesn’t know what to do. Luffy's instant acceptance and offer of help is exactly what Sanji needs, finally letting him be himself and do what he wants instead of what he feels like he has to.

That's the key here: acceptance. All of the characters who hide themselves do so out of fear of what would happen if they opened up, whether its harm to their loved ones or judgment from those same loved ones. It's no way to live; Katakuri and Pudding spent most of their lives doing so, and it's obvious that neither of them is happy with where they’re at. It's only once Luffy and a newly-unburdened Sanji get involved that things begin to change. 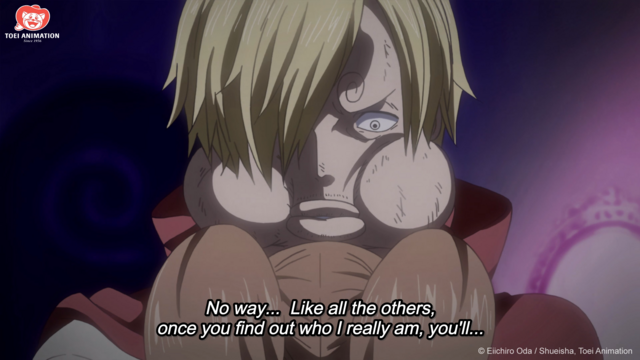 For Pudding, it's Sanji's reaction to her third eye that puts the first crack in her mask. Having someone immediately praise what had always been a source of shame shakes her worldview to its core. Maybe she's not so horrible after all? Maybe someone could actually love her for who she is? Thoughts like these are only intensified as she later works with Sanji to bake the cake and sees him treat her like a partner rather than a freak or a tool. Much as she tries to maintain her cruel facade, Pudding is no longer able to force everyone away. Sanji’s instant acceptance of her appearance and their growing closeness leaves a profound impact on Pudding, even after he leaves with the other Straw Hats. Whatever happens now, she knows that there's someone out there who accepts her for who she is rather than who she pretends to be.

Meanwhile, Katakuri's mask doesn't so much break as completely shatter from his own frustration. He's spent his entire life protecting his family at the expense of denying himself, so his fight against Luffy is almost a relief. Luffy's stubborn refusal to stay down begins to earn Katakuri's respect, which makes Flampe's interference all the more infuriating. Just as he was beginning to enjoy something for himself, his life and peoples’ opinions of him get in the way again. By berating Flampe and showing her his face, Katakuri's taking a leaf out of Luffy's playbook; he's opening up about who he really is with no concern for the distain or mockery he might get for it. From then on, he fights like he means it, giving it his all without worrying about his image or what other people might think of him. He finally has a chance to do something for his own sake without worrying about anyone else. 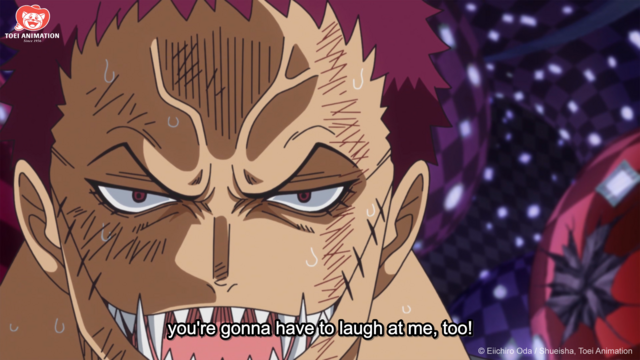 In the end, though, he finally gets his catharsis not through anger or frustration, but love. Like Sanji and Pudding, he finds someone who sees who he is and accepts him: Brûlée. Tired of hiding the truth, he tells her that his "perfect record" was all a lie, only for Brûlée to admit that she knew all along. He finally realizes that he's always had someone who sees his flaws and accepts him anyway, giving him the same comfort that Pudding got from Sanji. It’s fitting that the person he adopted his mask to protect is the very person who finally lets him remove it. He may have lost his undefeated record, but he gained something far more valuable out of it.

If there's one lesson to take from Whole Cake Island, it's that you have to be true to yourself. Sanji, Pudding, and Katakuri each have good reasons for hiding who they are, but that doesn't change the fact that it tears them apart inside. All of them are at their happiest when they're able to simply be themselves without worrying about the world around them. There’s nothing wrong with showing different facets of yourself in different situations. It’s perfectly normal to behave differently depending on the situation you’re in. But nobody can live their entire life hiding who they are for fear of what the world around them might do. Pretending to be someone you’re not will only lead to misery. We may not be able to always be as open as Luffy, but maybe we should take his honesty to heart and try to be just a little more like him.

What was your favorite part of Whole Cake Island? Let us know in the comments down below!