Today, let's conclude our exploration of how the My Hero Academia anime brings the Overhaul arc to life! 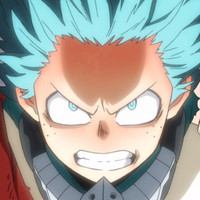 Hello all, and welcome back to Why It Works! Last week I shamefully left everyone hanging, as I concluded my first half of the Overhaul arc discussion without actually addressing any of the questions I raised. And I raised a whole lot of questions! The difficulty of transforming two-page impact spreads into fluid movement, the increasing visual complexity of My Hero Academia’s Quirks, the overtly shifting geometry of the Hassaikai compound… the arc offers a variety of unique challenges, and addresses them with a variety of unique answers. So let’s start where the attack itself does, with the very walls melting around our heroes! 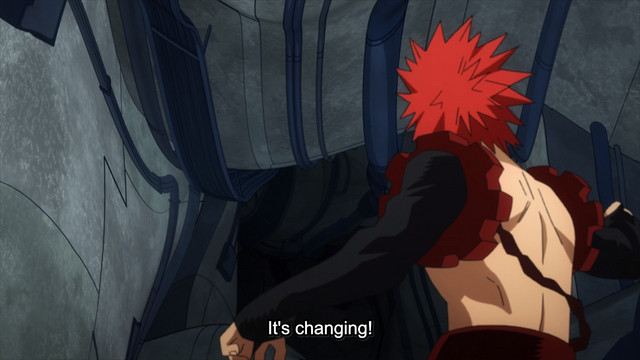 As I mentioned in the first half, one of the general rules of animation is that you can’t shift the camera’s perspective relative to the background, unless you’re planning to continuously redraw that background over and over for every single degree shift. For a power like Mimic, that implies continuance redefining of the fundamental geometry of the environment, simply maintaining visual coherence is a challenge; therefore, the entire Hassaikai compound approach path has been built as a CG rig, which can more effectively be squashed and stretched without demanding continuous redraws. Though a trick like this could easily devolve into visual noise, the combination of pipes extending from the walls and human figures placed at intervals throughout maintains a sense of depth and distance, making for a convincing balance of disorientation and dramatic clarity.

At other times, My Hero Academia captures the raw, rugged intensity of its source material simply through the personality of its animation, and choices in terms of what sequences to most fluidly animate. One of the great strengths of the original My Hero Academia manga is the ragged impact of Horikoshi’s linework. The translation to animation has a tendency to soften and homogenize the aesthetic of manga (a necessary concession to animation-friendly designs), but for season four’s big setpieces, the focus is often not on fluidity of ambitious body movement, but complexity of linework and attractiveness of aesthetic within single, impactful character motions. 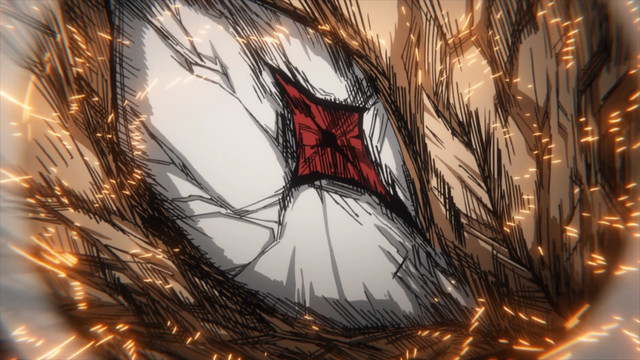 While emphasizing complex linework is generally a bad idea for animation, for this season’s big setpieces, the complex linework is the drama—you want to see every crack in Red Riot’s shattering armor, and every detail of Sun Eater’s bizarre chimera form. By focusing on intense linework and major impact shots over physical choreography, the anime is able to capture the appeal of its source without compromising its own visual impact.

Along with its clever use of CG sets and smartly employed animation, these episodes also maintain visual clarity and dramatic urgency through simply adhering to the narrative fundamentals of effective action sequences. Fights like Lemillion’s exhausting battle demonstrate My Hero Academia’s precision in terms of executing potentially convoluted fights; there’s no CG helping to make the range and limitations of Overhaul’s powers clear, just one smartly planned transition after another. 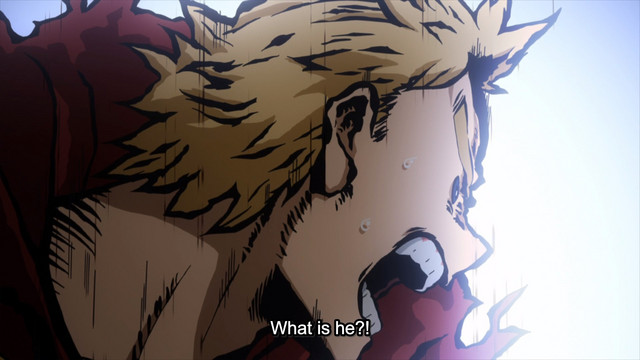 In spite of Lemillion and Overhaul’s battlefield being in a constant state of destruction and reformation, the actual tactical stakes of the fight are always clear. Lemillion wishes only to rescue Eri, and his power directly counters Overhaul, but he cannot retrieve her without incapacitating Overhaul, and thus must disable his opponent while keeping Eri safe—a condition his enemies are happy to exploit. The clear tactical stakes of this fight make the momentum of the action far easier to follow, as even when it’s difficult to parse what exactly Lemillion or Overhaul are attempting in terms of employing their powers, their overarching intent is always obvious: Lemillion is seeking to knock out Overhaul without letting Eri get hurt, while Overhaul is seeking to use Eri’s fragility to guide Lemillion into a self-destructive position.

In addition to the clarity offered by the coherent, engaging stakes of this battle, Lemillion’s fight also benefits from excellent storyboarding that always keeps the flow of the action clear. Attacks don’t just come out of nowhere; each action is precipitated by a prior action, as the three active combatants continuously reassess the field, with their own perspective and new focus generally guiding each sequential shot transition. “Animating” action scenes is often just as much about where you make your shot transitions as the animation itself, and the Lemillion battle does a wonderful job of keeping the flow of tension clear, making it exciting and easy to follow in spite of the absurd visual scale of Overhaul’s power. 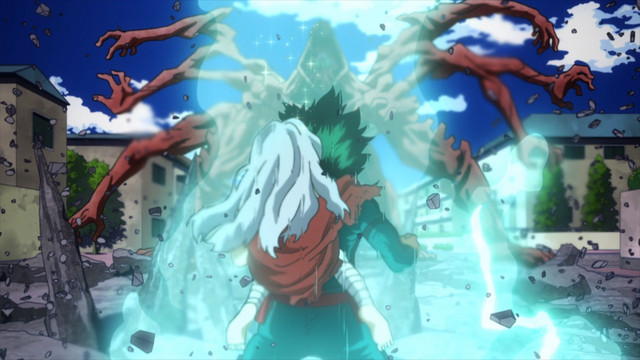 And sometimes? Sometimes you just bring in a ringer. All of the animation-unfriendly issues present in this arc mean consistently fluid animation is impossible; but television anime has never been defined by consistency. Fluidity ebbs and flows depending on the dramatic and visual needs of the narrative, and if a certain difficult-to-animate sequence absolutely needs to pop, well, that’s tricky, but certain animators can accomplish it. Midoriya’s fight against Overhaul consumes the last two episodes of the Hassaikai raid, and is absolutely brimming with cuts that demonstrate the beauty of animation as a showcase for specific animators.

Look at the almost gentle explosion of Deku’s clothes as his body is wrapped in energy, a cut likely animated by My Hero Academia's legendary character designer/animation director Yoshihiko Umakoshi. Look at how the beautifully twisting tendrils of Overhaul’s powers lend this cut a sense of massive physical space. Look at how Yutaka Nakamura, one of BONES’ most treasured animation assets, creates such an intense sense of speed through the distorted figures, impact frames, and staggered visual pacing of this mighty punch. There are things which are easier and things which are harder to convey in animation, but when one of the best animators in the business is given free reign and ample time to bring a sequence to life, anything is possible.

All in all, I’d say the My Hero Academia anime did a commendable job with an impossible task. I hope you’ve enjoyed this exploration of the pitfalls of animation, and please let me know all your own favorite Hassaikai moments in the comments!

Adapting the Impossible: Translating the Overhaul Arc into Animation