Is Dio a Real Vampire?

It's time to take Dio back to vampire school! 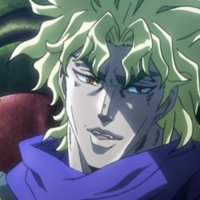 For years, vampires have been depicted as brooding hotties of the night. The most famous vampire, Count Dracula, originated from the 1897 gothic horror novel by Bram Stoker. One of the first vampire stories to reach a wide audience, Stoker’s vision of the vampire came from both a fear of the uncanny and the real fear of infection—of catching the vampire virus and deliberately spreading it. Most importantly, the story of Dracula is told from various narrators, each providing their own insight into his strange array of powers and abilities. JoJo’s Bizarre Adventure, the story of the Joestar family against one truly evil man, is one such modern vampire story.

Dio Brando, the legendary nemesis of the Joestar family and every subsequent JoJo, first appeared in the 1987 serialization of Hirohiko Araki's Phantom Blood arc. Dio is commonly depicted as one such brooding hottie of the night. With his immaculate physique and endless charisma, Dio is no doubt a suitable comparison to Stoker’s Dracula and his thirst for power. But how well does Dio actually match up to this supernatural icon?

It’s hard to draw a straight line from Count Dracula to Dio. Phantom Blood tells the story of Jonathan Joestar, a boy raised into wealth and privilege, and Dio Brando, an orphan who is adopted as his brother. Both brothers exceed in many fields; however, when Jonathan calls it quits on researching a mysterious Stone Mask, Dio takes it upon himself to discover its bloody secret. After confirming the mask’s true purpose—to turn its wearer into a vampire—Dio kills Jonathan’s father, betrays the Joestar family, and uses the mask himself to become the bloodthirsty creature we love to hate. 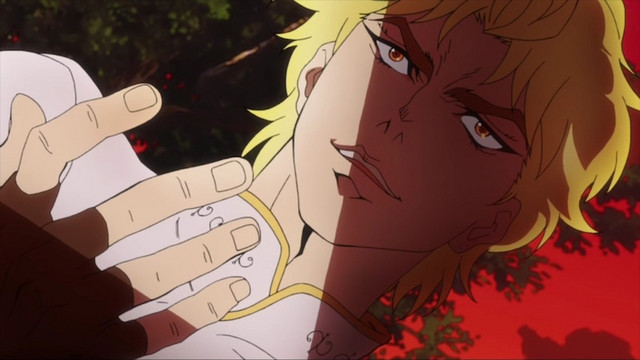 Dio's evil nature is represented by the contrast of light and dark and most importantly, sexy hair.

This isn’t quite Count Dracula’s own origin story, but it’s not too different either.

Count Dracula, while best known for drinking blood and transforming into a bat, is described by Stoker’s various narrators as having a wide array of powers. These include, but are not limited to: telekinesis, teleportation, weather manipulation and communing with animals (rest in peace, Danny). For all intents and purposes, Dracula might as well have been his own one-man stand.

But how exactly did Dracula become a vampire? While never confirmed, it is suggested by Stoker that the famous vampire himself made a deal with the devil, aka leaving the details up for interpretation. Dracula was never bitten, but somehow bestowed the power of transferring his powers via biting and having his victims violently bleed out to death. Less Lestat de Lioncourt, more Patrick Bateman. This method of bloodletting is implied in the Stone Mask’s supposed origins as an Aztec artifact, despite the religious ritual being more commonly associated with the Mayans. The Stone Mask, which attaches itself to those who wear it with infectious tendrils, does more biting than Dio ever does as a vampire. But that doesn’t make him less of one, either. The Stone Mask's origins, in fact, help us better understand Dio's unique brand of monstrosity.

Given the mask’s origins from the Mesoamerican region, perhaps comparing Dio to Count Dracula isn’t quite fair. Although Dio aesthetically embodies Dracula’s characteristic love for luxury and cruelty, he arguably isn’t a straight reimagining of Stoker’s Dracula. In the Popol Vuh, a text describing the mythology of the Mayan K’iche’ people, underworld bat monsters called Camazotz participate in Mesoamerican ballgames and are exceedingly good at competition. While never implied to be vampires as we know them today, the bat is now commonly associated with vampires in pop culture thanks to Dracula. Maybe one of the hallmarks of vampirism being good at sports? Either way, the Stone Mask's inspiration suggests that Dio's brand of vampirism might not be the stereotypical blood sucking bang-bang we first think of. 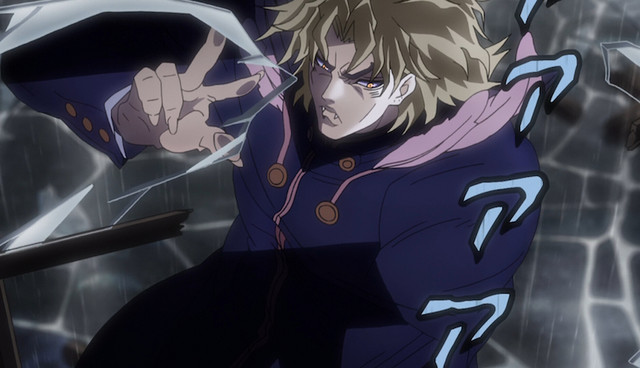 Even the undead can JoJo pose!

Ironically, Dio and Jonathan participate in their own ceremonial ballgame in Phantom Blood—rugby. And Dio is damn good at it. However, this comes at the expense of Jonathan’s own suspicions, as he wonders after seven long years of living with Dio as his brother, if he’s truly accepted him as his own blood. Dio is good at everything, but maybe too good to be trusted. If Dracula and the Camazotz have anything in common, it’s their capacity to be extraordinarily (and supernaturally) talented.

And if Dio is talented in anything, it’s knowing he’s better than you. And he’ll do anything to prove it.

In a 2018 issue of kotoba, a culture magazine published by Shueisha, Araki stated that Dio was inspired by actor Rutger Hauer’s portrayal of Roy Batty in the 1982 movie Blade Runner. While Araki cites Hauer merely as inspiration for Dio’s appearance, the comparison is somewhat ironic given Dio’s vampirism. The “bad boy vampire” trope was an emerging trend overseas around JoJo’s first arc. The Lost Boys, a movie about a beach town and a gang of '80s vampires, debuted alongside Phantom Blood’s 1987 serialization in Japan. The concept of a formal gentleman vampire is corrupted by Dio—he is deliberately everything a JoJo isn’t supposed to be, embodying all the cruelty and ego one would expect from a man who thwarted death at every turn. And yet, he persists to be a snide brooding night hottie and get his way every time. 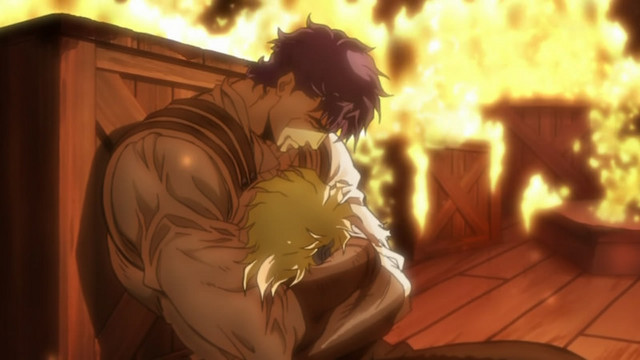 Even after everything Dio's done, Jonathan still lovingly cradles his decapitated head.

Dio isn’t a literal vampire, but a psychological one. He doesn’t just drink blood, but people’s free will. Characters like Josuke, Jotaro, and even Giorno have all been selfish and petty, but Dio takes it up a notch. The real horror of Count Dracula is his infectious personality and unshakeable influence, a disease far worse than a case of vampirism. The 1922 German film Nosferatu is just one of many Dracula adaptations which emphasizes these psychological undertones. The true horror of the vampire isn't the supernatural superpowers, but the power of abuse. While popular media loves to depict the vampire as beautiful and mysterious, they are at their heart possessive, deliberately controlling creeps.

The final scenes of Phantom Blood depicts Jonathan cradling Dio’s decapitated head, not knowing that Dio will soon take over his body to fight his descendants. Life as a vampire abruptly begins and ends with blood for Dio. He somehow stays alive long enough to possess Jonathan’s body in a way far more invasive than any vampire bite. With body possession and transformation being a recurring theme with JoJo’s villains, like Diavolo and Yoshikage Kira, a different type of vampirism makes Araki’s world all the more horrifying and uncanny. Dio is a monster beyond classification and he’s all the better for it.

What JoJo's Bizarre Adventure villain is your favorite? Is Dio is the cruelest vampire alive? Let us know!