That blue hedgehog isn’t anywhere near as cool as the great Dr. Ivo Robotnik! 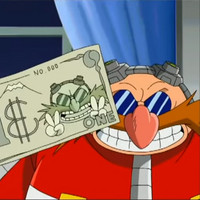 There’s a saying that all great heroes need a great villain, and in the case of Sonic the Hedgehog, that really couldn’t be any more true; after all, where would SEGA’s iconic mascot be without his equally great villain, Dr. Ivo “Eggman” Robotnik? While everyone is hopping on the Jim Carey train thanks to the new live-action movie, we figured now was a great time to remind everyone of the one true shining Chaos Emerald of the Sonic X anime: Eggman himself! That’s right, the rotund and robust professor of pain is, really, the only thing Sonic X did that’s worth remembering. So, for this momentous movie event, we figured there’s no better way to honor the legacy of Eggman than to talk about why he single handedly made Sonic X worth watching. 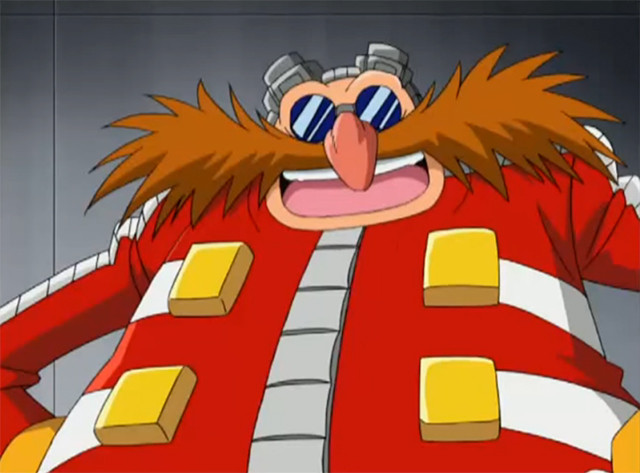 Chances are that if you grew up in the US sometime between the '90s and '10s, you watched a lot of your anime on TV during your childhood. For many anime fans, that meant healthy doses of WB and 4Kids inspired treatments of shows, and Sonic always featured prominently in those Saturday morning blocks somewhere. But the first real Sonic anime to hit American television, Sonic X, took a departure from the Archie comics inspired weirdness of previous Sonic cartoons to present a modern, updated, post-Sonic Adventure 2 vision of Sonic: Sonic X! And boy, was it not very good!

Now, we get it, we aren’t trying to assassinate your childhood or anything; we thought the show was kinda fun too when we were younger. But looking back on it, the weird story of Sonic and company being transported to Earth and living with a generic, no-name character and his weirdo family certainly wasn’t the type of Sonic storylines we expected to be seeing (although the opening song was pretty legendary). Even worse, the show tried to balance the absolutely bloated cast of Sonic Adventure, including appearances by Sonic, Tails, Knuckles, Shadow, Rouge, Amy Rose, Cream the Bunny, Big the Cat, and even the Chaotix team for some reason. But the true star that made the show entertaining was the good doctor himself, Eggman! Without Eggman, the show was frankly boring and pretty flat, with storylines like Sonic trying to beat a racecar driver (which we all knew he could do anyway, right?!). No, Sonic X owes all of its greatest moments to Eggman: blowing up the moon and making a new, better moon, awakening Shadow, and even defeating the intergalactic horror of the Metarex were all only possible because of the ingenious skills inside that beautiful brain. 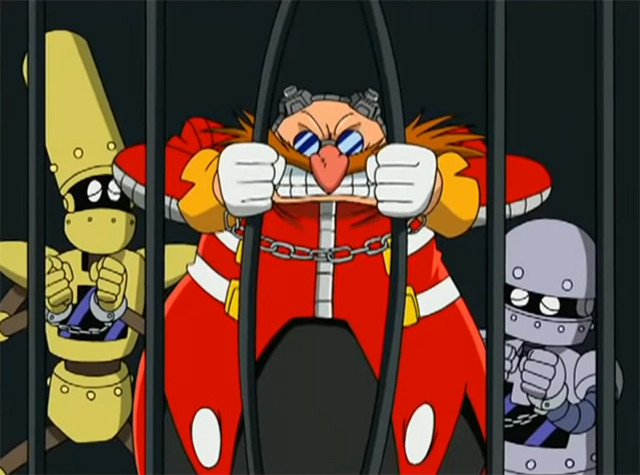 And, yes, Eggman is the villain of a kids show; most of his plans aren’t very complicated or evil, but they propelled the entire plot of the series in most cases; heck, he even draws his own money while pretending to be President instead of doing anything really evil or creative with the idea. But without Eggman’s schemes, most of the first two seasons go absolutely nowhere, and it’s only due to his determination to defeat Sonic and take over the world that Shadow is even discovered in the first place.

But perhaps Eggman’s greatest single accomplishment in Sonic X is the story of how he blew up the moon. Yes, you read that correctly: the sphere in the sky responsible for controlling tidal flow and other things was “accidentally” destroyed by the great doctor; we know, he probably didn’t mean to cause any real harm. After all, he invented a NEW moon to take its place! What a great guy! 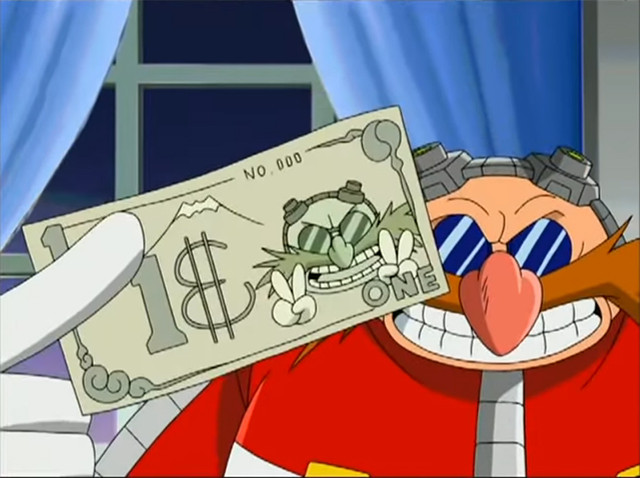 The moon saga of Sonic X remains one of the funniest memories of the entire series (and, personally, the main reason I even remember the show at all). It features all of the general ridiculous ideas you might expect in a Saturday morning cartoon, with the cast acting almost entirely out of character, save for Eggman, who of course is working a long con of helping the people of Earth after he LITERALLY BLEW UP THEIR MOON ON PURPOSE by selling “sunshine balls,” and when Sonic catches on that this plan isn’t all it’s cracked up to be, gets the President of “a country” to agree to take martial action against Sonic.

Honestly, rewatching it, the entire sequence feels like it’s borrowing cues from the conclusion of Devilman, with the main cast being harassed and swarmed by angry mobs of random people, lusting for the blood of Sonic, while Eggman simply reclines and bides his time before finally gagging the President and… drawing money with his own face on it. That’s it. That’s his final, real idea for this caper. Assuming that he’ll become the next President once Sonic is dead and the world is at his fingertips, Eggman simply ties up the current President and… doodles fake money, before, of course, Sonic comes and ruins everything by saving the day. Nerd. 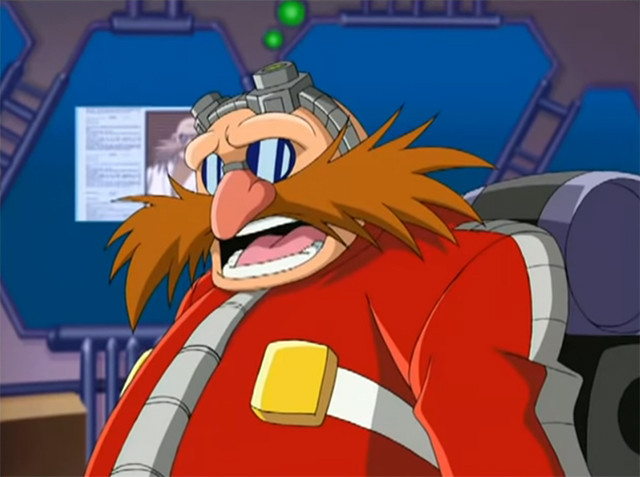 Almost every story in Sonic X works in this fashion when Eggman is involved, and the 70+ episode-long series really owes it to him for carrying all of the weight of the show on his back. The Earth-based storylines, like the race car driver and other goofy things, are barely even worth watching, let alone remembering, and it isn’t until Eggman makes some sort of appearance on screen that anyone should even care about the show. Eggman is reverse Poochy: everyone should be asking where Eggman is at all times, but unironically.

In the climactic ending of the third season, Super Sonic and Super Shadow can’t even defeat the Metarex without Eggman’s help, and literally no other character is in any way more useful than the doctor that they’ve all been negging on for the entire series. Shows how grateful they really are! Frankly, this type of villain reversal was always a common, but fun, trope in Saturday morning TV fair, and Sonic X really nailed it by taking advantage of how awesome Eggman really was in order to pull it off effectively. 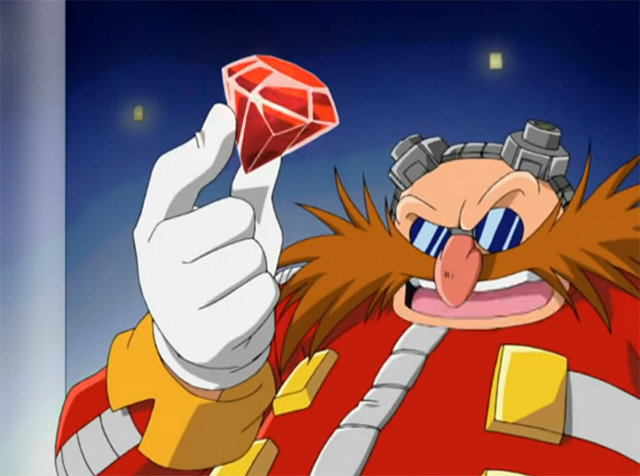 Honestly, maybe that’s what makes Eggman so great in general as far as a villain and a character is concerned. Although his plans usually amount to being totally ridiculous (seriously, just… going to turn animals into robots? That’s your big plan?), when Sonic series media wants things done or explained, it generally falls to Eggman to do it. Shadow? Eggman. Chaos? Eggman. Chaos Control? Also Eggman. The entire point of Sonic in any game, comic, show or movie has no momentum unless Eggman appears to push things along and get the blue rat to lace up his sneakers.

Even the final episode of Sonic X requires Eggman to intervene in order to send original character and human protagonist, Chris, back to Earth, because no one else is smart enough to get the dimensional machine working again. Without Eggman, Chris would have just been stuck in Sonic’s world as a 12 year old forever, but you didn’t hear Eggman begging to be thanked for all of his hard work! Instead, Eggman simply takes it all in stride, claiming that Chris makes Sonic too strong, and sends him home. What a secret softie! 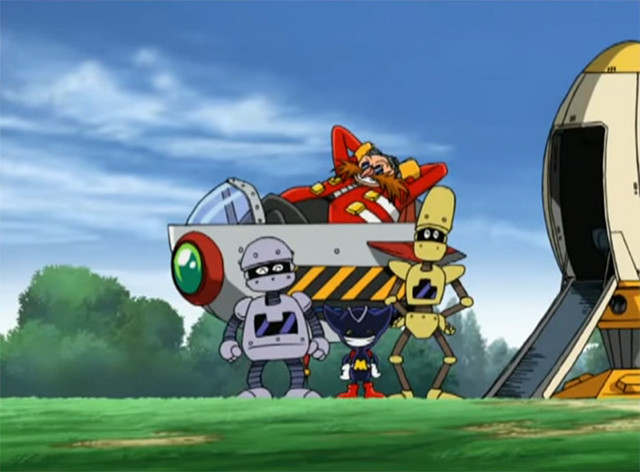 As Sonic’s movie hits theaters and people start to fondly reminisce on what they loved the most about the franchise, we hope that this little PSA has reminded you of what’s truly important: that Sonic X was a pretty whatever show with one of the best characters of all time: Dr. Eggman! Doctor, we salute you in all that you do!

Are you an Eggman fan? Did Eggman write this? Let us know what you think in the comments!