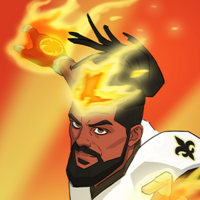 Today’s profile is on Cameron Jordan, a five-time Pro Bowl Defensive End for the New Orleans Saints. Considered one of the best defensive players in the NFL, the only thing that might compare to his impressive stats is his deep knowledge and passion for anime. Starting off with Shonen Jump classics like Shamen King, Dragon Ball, and Yu-Gi-Oh!, Jordan has dived deep into the anime fandom and found new favorites like Reborn!, Mob Psycho 100, DanMachi and many more. We sat down with Jordan to talk about his wide-ranging love of anime, how so many more players in the NFL are becoming anime fans, how to find your next favorite series, and more! 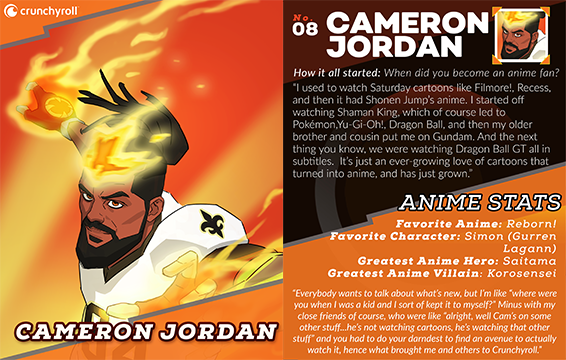 (clickthrough for a full image)

When did you become an anime fan?  Was there a specific moment (like watching a certain series or character’s experience) that affected you or changed the way you felt about something?

I used to watch Saturday cartoons like Filmore!, Recess, and then it had Shonen Jump’s anime. I started off watching Shaman King, which of course led to Pokémon, Yu-Gi-Oh!, Dragon Ball, and then my older brother and cousin put me on Gundam⁠—Gundam Wing, the Gundam Zero, just the arc that is Gundam. And the next thing you know, we were watching Dragon Ball GT all in subtitles.  It’s just an ever-growing love of cartoons that turned into anime and has just grown. 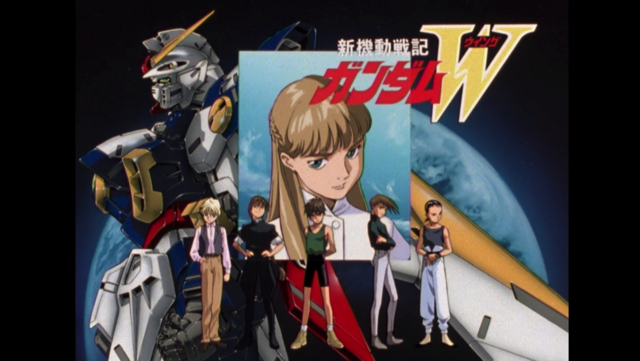 I’m always wearing some sort of t-shirt. What Goku meant to everybody, Krillin, Yamcha when they were studying and had the Gi on and I was like “I need to have it." Of course, you have to talk about Afro Samurai and the #1 headband⁠...Got that! Probably going to rock it this season sometime. I haven’t yet gotten into cosplay, but if I ever found a proper Deku suit for me I’ll probably end there (or being Sub Zero).

Yeah, you talk to guys in the NFL now like “Hey bro, have you seen the latest My Hero Academia? Or the new Radiant? Or ask “What started you off?” Everybody’s been on the Naruto manga, and now they’re pushing Boruto but I’m not really here for Boruto. I’ve watched Dragon Ball to Dragon Ball Z to Dragon Ball GT and now to have to split back to Dragon Ball Super. I’m going to give it some time till I get there. But you can always bond over talking about what your favorite anime is.

My favorite would probably be Reborn!. It holds such great anime action into it. Or you could probably go Yu Yu Hakusho. How I really started was with Samurai X. It made me want to watch it all the time. Between Samurai X and Yu Yu Hakusho, that was my childhood. 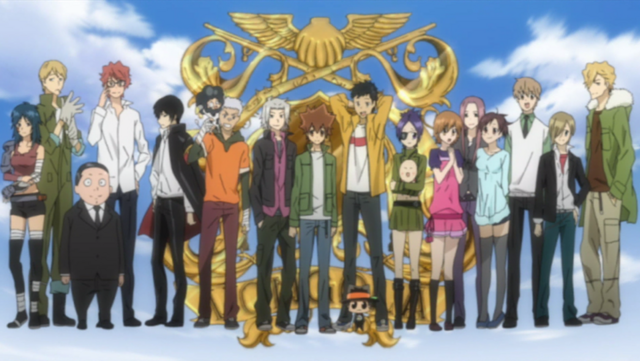 I refuse to say Sasuke just because everyone’s on the Naruto hype now...I was there long before, reading manga back in the day when Demon Eyes Kyo was a great manga series. I’m all about overpowered characters, so I’d say Simon from Gurren Lagann is probably one of my favorite characters of all time.

Always going to be Saitama from One-Punch Man because he’s unbeatable. There’s no adverse situation for him; he just overpowers everything. Other than that, I was a Gohan guy back when everyone was screaming Goku, and then he topped out for me when he no longer wanted to go super saiyan, and believe in his mystic saiyan hype. I was like “We did so well in the Cell series: why are we changing now?!” 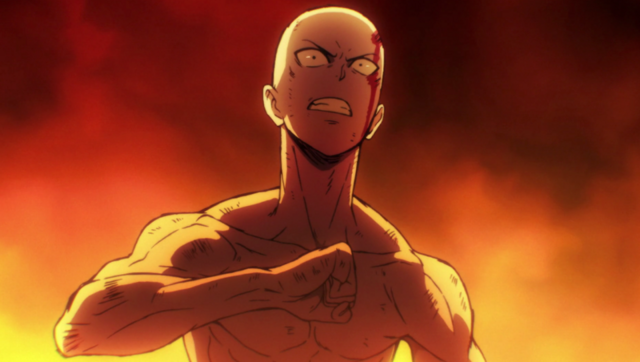 You could say Freiza from the Dragon Ball series. He just keeps coming back. You’ve killed him, he’s gone to hell and back. He’s died more times than Krillin, which is impressive.  Actually I’ll probably go with Korosensei from Assassination Classroom. No one could actually defeat him. He was a villain to the world because he took a chunk out of the moon, but at the end of the day, nobody could top what he did.  Being a fan of overpowered people, that’s probably it. I’ll go with Korosensei.

I feel like guys have always probably watched it, but now it feels like there’s a cult following with anime in the NFL. Lowkey, I sort of think it’s kind of like a bandwagon right now. Some guys are like “Ya, I watch such and such," and it’s just like watching the latest TV series like Snowfall or Narcos or something. Guys just hop on the train. But at the same time, guys like watching mainstream anime, but it’s like “Alright bro, but what else?” Everybody pushes out One Piece, and One Piece is cool, but there’s so much more anime. I like watching the anime that goes 1-2 seasons, forcing you to move on when you want more. I just had somebody come up to me asking about the new Evangelion and I was like “Nope, I’m here for the original and I’m not here to discuss it.” Everybody wants to talk about what’s new, but I’m like “Where were you when I was a kid and I sort of kept it to myself?” Minus with my close friends of course, who were like “Alright, well Cam’s on some other stuff...he’s not watching cartoons, he’s watching that other stuff” and you had to do your darndest to find an avenue to actually watch it, hence what brought me and others to Crunchyroll. 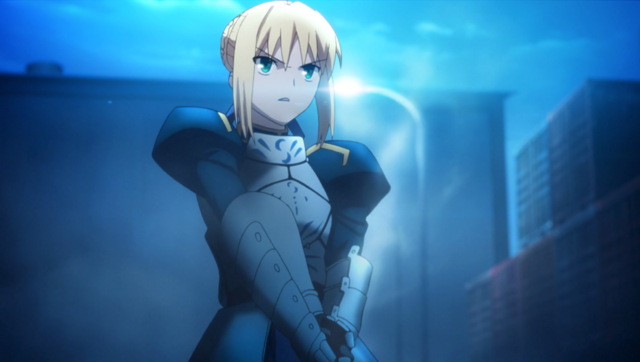 If you’re going to watch anime, I say do it for yourself. Find something you like. I’ve always liked overpowered characters, unlike my brother who just watches anime regardless of the genre. I’m always into somebody who’s superpowered or overpowered who has to overcome something to become superpowered. I’m a little power-hungry I guess.  For somebody new who’s looking to get into anime and asks me “what’s a good anime to get into?”, I’m going to talk about Fate/Zero, Mob Psycho 100, and probably stick to anime where people who start off weak get strong like My Hero Academia. If you're thinking about getting into it, why not?