Keep Your Hands Off Eizouken!'s Look into the Heartfelt Moments of Animation Inspiration 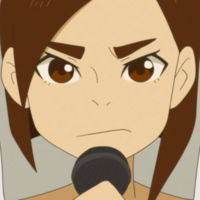 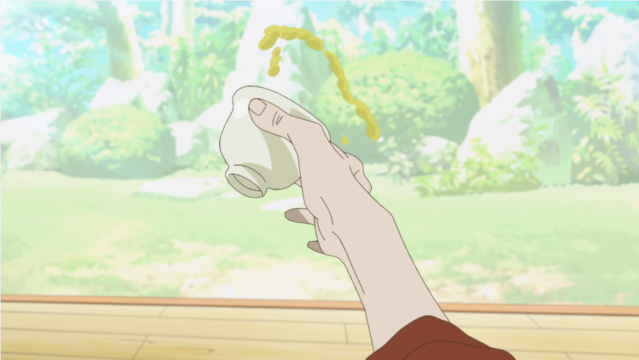 When Keep Your Hands Off Eizouken!'s Tsubame Mizusaki was a little girl, she became obsessed with the motion of her grandma throwing tea. She asked her to do it again, and again. She performed the motions herself. She sketched the movements of her classmates when she was supposed to be learning about posture. Something about that practiced flick seized her attention. Not the flesh or the bone but the vector of the hand, and the way the drops of tea hung in the air before they hit the ground. The animation.

In high school, Mizusaki worked with her friends to co-produce an animated short film for the robot club. In that film, a closed room of scientists witness a monster rising from beneath the school. And then, it happens: The motion of her grandmother’s flick of the wrist appears once again. There is no dramatic monologue that lays this out for us. Mizusaki’s parents talk about their daughter’s incredible eye for detail, but they do not mention the tea flick. It is there and gone, like a ghost. 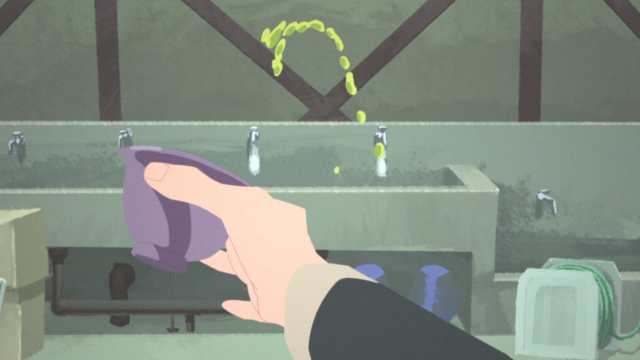 Just as Mizusaki was shaped by her obsession, the other members of the Eizouken were shaped as well. As a child, Midori Asakusa thought of herself as an adventurer as she scoured her new town of Shibahama for exciting discoveries. She recorded her findings in a notebook—very much like the one she would fill with designs as a high school student. But it was Future Boy Conan that made her realize the things she was drawing each day could be harnessed toward something larger. The world of Conan is an exaggerated one, where a young hero can take out a shark in the first episode and flying machines trawl the skies. But it was that exaggeration I think Midori responded to. If the real world is already amazing enough, what if you could build an even bigger one? From that moment on, each uncovered relic and building she found in Shibihama became fodder for her grand design.

Even non-artists like the producer Sayaka Kanamori can become haunted in this way. Kanamori is deeply unsentimental, and her response to the ambitions of her fellow Eizouken members is "I respect the work you put into this. Now how do you plan to make it?" If you discussed work, much less anime production, as the result of "inspiration" rather than labor mediated by careful pragmatism, she would laugh in your face. But as we see later in the series, Kanamori became who she was because of the family-owned grocery store she could not save. "It's no use if the product is good," she says, "if nobody knows what it is." But again, I think it's a little more than that. We know that as a child she was already very good at making money and at reading people. What Kanamori learns in this moment, and drives her actions in the future, is that making money isn't good enough if the people who need it can't use it. 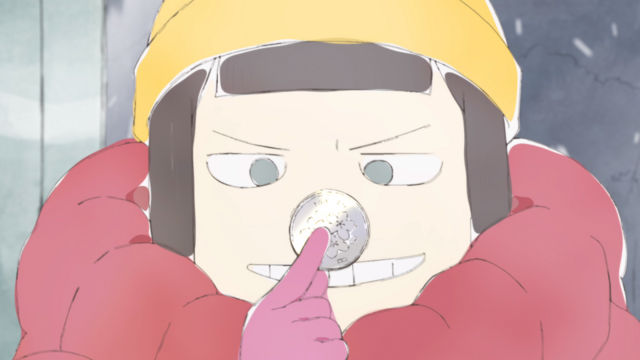 Maybe you’ve seen seeds sprout in the work of real-life animators, too. One example includes Hiroyuki Imaishi’s (Trigger co-founder and director or Gurren Lagann and Kill La Kill) slavish devotion to the work of Yoshinori Kanada. His most recent film, the explosive Promare, takes place in a universe where the hero's rival's most dangerous technique is transforming himself into Kanada's most famous special effect, the Kanada dragon. Kunihiko Ikuhara cribs ruthlessly from his favorites: one of Penguindrum's main themes sounds suspiciously like "Laura Palmer's Theme" from Twin Peaks, and the school in Yurikuma Arashi looks a lot like the one in Suspiria. His pick of J.A. Seazer to provide scoring for Revolutionary Girl Utena is less an out-of-nowhere brilliant choice and more the work of a diehard fan of Seazer's infamous collaborator Shuji Terayama. There are also those like Hiroshi Nagahama who made The Reflection, a superhero anime in collaboration with his childhood icon Stan Lee. 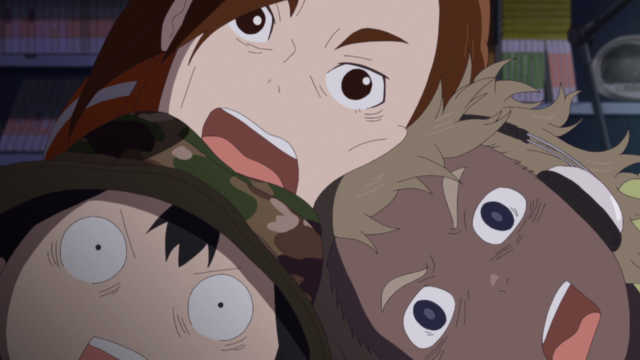 I remember what set me on the path of becoming a writer, too. My grandfather read me fairy tales, and like Mizusaki, I bought and read and transcribed every fairy tale I could find. My father told me bedtime stories he stole from whatever science fiction book he was reading at the time, and it was with that spirit of adventure that I pillaged his bookshelf in search of new discoveries. I don’t believe, as some people do, that telling stories is what makes us human—that’s just a marketing gimmick. What I do know is that if you love to tell stories, it’s hard not to do it. 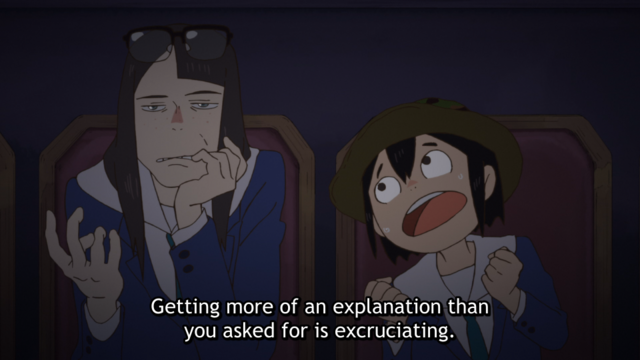 Asukasa saw Future Boy Conan at just the right time to impress on it like a baby chick. Kanamori witnessed the closing of the store where she worked at an old enough age to grasp unfairness, but was too young to do anything about it. And maybe Mizusaki fixated on her grandmother's hand movements because in contrast with her busy parents, her grandmother was there and she loved her. But none of those things are enough. Asakusa and her friends aren't just trying to create a "world," they are trying to make the "Greatest World." Which means nostalgia isn't enough. Which means frantically chasing that feeling you dimly remember isn't enough. What you need is the curiosity to seek out the strange and unusual, the eye to see it, and the perspective to convey the heightened truth of it in a way that leaps off the page or the screen. All these things come from love. 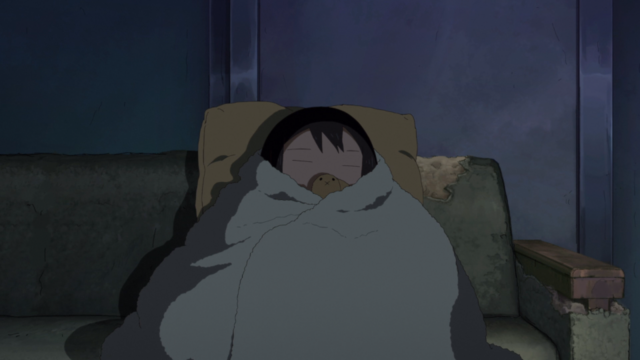 When we see the small tank in the first Eizouken film fire its cannon so hard that it tips on its bottom, we know without a doubt that small moment was informed by Asakusa’s love for practical mechanics, internally consistent worldbuilding, and sense of cool. When we see a man run in the second Eizouken film, Mizusaki’s parents point out that run was given life by Mizusaki’s eye for detail (and her refusal to compromise on rendering that detail). When we see the flooded streets of Shibahama in the third film, we see the fruit ramen restaurant, the clock tower, and the bells that Asakusa and her comrades visited in pre-production. It is art that only Asukasa, Mizusaki, and Kanamori (and their friends) could create. Through their hard work and labor, they have transformed their obsessions into something that is alive.

As some have said, the thread that connects the work of Keep Your Hands Off Eizouken!'s director, Masaaki Yuasa, is love. Eizouken is another one of those. But in the friendship of the Eizouken trio and their hangers-on, and in the drawings they produce, you can see the specter of life. Just as Mizusaki was haunted by the arc of her grandmother’s hand, perhaps there will be an artist who will never forget it. 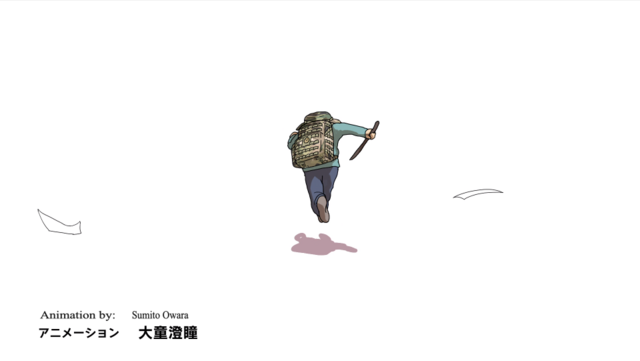 Did you watch Keep Your Hands Off Eizouken! to the end? What were your favorite scenes? Should Kanamori marry Midori or Tsubame? Let us know in the comments!

Adam W is a Features Writer at Crunchyroll. His favorite anime directed by Masaaki Yuasa will probably always be Kaiba. He sporadically contributes with a loose coalition of friends to a blog called Isn't it Electrifying? You can follow him on Twitter at: @wendeego

Tags
keep your hands off eizouken!
« Previous Post
Tower of God Anime Shares a FINAL Trailer Before Launch
Next Post »
EXCLUSIVE: In/Spectre Producer On the Challenges of Turning Manga into Anime
Other Top News
5 Comments
Sort by: