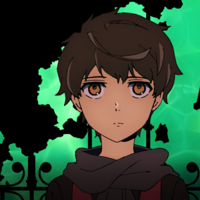 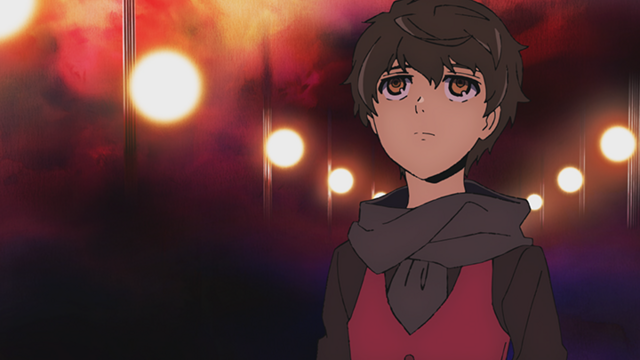 What do you desire? Honor and pride? Power and Influence? A handy recap to help you keep up with the Crunchyroll Original anime series Tower of God? Check. On that last one. You're on your own with the rest. Be warned, there are spoilers for Tower of God Episode 1, "BALL," ahead.

At the top of this mysterious tower lies everything you could have ever wanted in life. Rachel only wanted to see the stars and set out to climb the tower to do so. Bam only wants Rachel. Bam pleads with Rachel not to climb the tower, knowing death is a real possibility for those who attempt it. But Rachel insists and begs Bam to move on with his life without her.

Even as Bam loses his closest friend, his love for Rachel is so powerful he is transported inside the tower himself, where he meets the tower's caretaker, the rabbit-looking Headon. Headon already knows who Bam is, and Bam immediately realizes this is because the rabbit master has already spoken to Rachel at some point in the past. Headon informs Bam that he will have to climb the tower himself if he wants to reach the top and find Rachel, but warns Bam the trials of the tower can be dangerous ... and deadly. 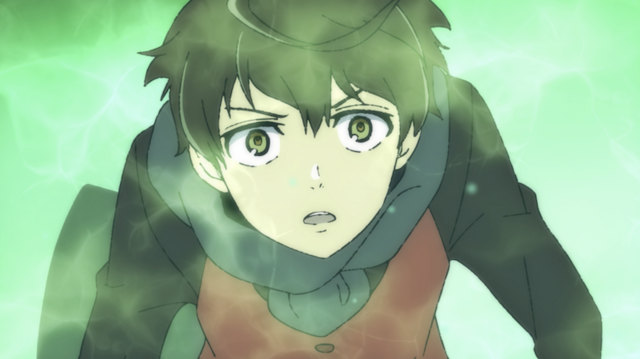 Undeterred by the potentially fatal obstacles laid before him, Bam is ready and willing to do whatever it takes to find his friend. Up first, the ball. In order to show he is worthy of moving onto the second floor, Bam must break a large ball located in the middle of a giant water-filled cage. Between Bam and the ball awaits the enormous White Steel Eel.

Dedicated to his quest, Bam rushes headlong toward the eel's cage without even thinking and ... is immediately (and forcefully) stopped by Princess Yuri. Yuri screams at Bam, asking him if he understands how dangerous this test is, but he cannot understand her. Yuri's partner, Evan, arrives with the team's Pocket, which acts as their "lifeline" in the tower ... and also helpfully translates their language so that Bam can understand them. Yuri and Evan explain to Bam that he is an Irregular—someone who opened the gates of the tower themselves. 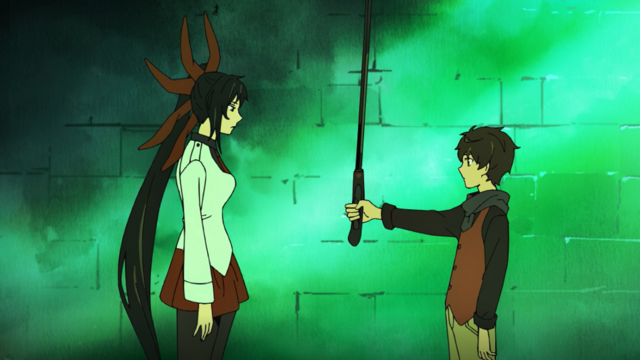 After listening to this encounter, Headon suggests that Yuri should lend her Black March—a powerful weapon that cuts through basically anything—to Bam. Evan rejects the idea but Yuri goes along with it based on Bam's cute face. Evan becomes jealous of Yuri's compliments on Bam's appearance but she assures him that she does not have feelings for Bam nor does she believe an Irregular can change the tower. She's just bored.

Bam promises to return the Black March after he succeeds in the ball test and heads into the cage to face the White Steel Eel. The giant eel turns and heads straight for Bam, causing Princess Yuri to frantically scream at Headon as she attempts to protect Bam from the massive fish. Headon refuses, stating that helping Bam now would result in him failing the test. Yuri watches helplessly as Bam is swallowed whole by the eel. But he isn't kept down for long. Moments later, Bam is spat out, having stabbed the eel from the inside with the Black March sword. 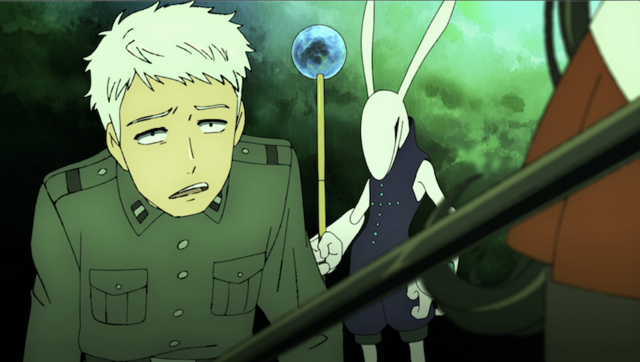 After seeing Bam's encounter with the eel, Evan notes that the true first part of this test is proving one can endure the fear of death, which Bam has clearly succeeded in. Bam approaches the ball and strikes it with the sword but the ball remains intact. Headon tells the group this is only the beginning of Bam's test.

We see a flashback to Bam and Rachel's first meeting in between clips of Bam repeatedly striking the ball with the sword. Rachel saved Bam from an underground cavern, pulling him into the light and becoming close friends. Even at that time, all she wanted was to climb the tower and see the stars. But from the moment they met, Bam only wanted to be with—and to be like—Rachel.

Becoming desperate and frustrated, Bam swings the Black March as hard as he can, attracting the White Steel Eel with the noise. Evan calls out to Bam in an attempt to protect him from the riled up fish and orders him to ask the Black March for help. Yuri does not believe the sword would listen to an Irregular, but Bam gives it a shot anyway, asking the sword to give him strength. 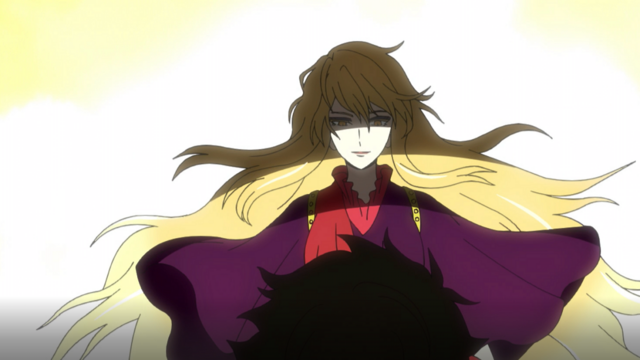 An ethereal-looking woman appears from inside the Black March, much to Yuri's surprise. The sword had never granted her requests for strength before. The woman asks if Bam wants to climb the tower and he clarifies that he does not, he only seeks Rachel. The sword entity finds this boring but decides to help Bam because she, too, thinks he has a rather cute face. She embraces the Irregular hero and the ball shatters and she and Bam ascend to the second floor. Realizing that Bam is still in possession of her weapon, Yuri and Evan decide to follow him. While traveling to the second floor, the woman warns Bam that even if he does find Rachel, things between them will never be the same, as she has now lived more lifetimes than he has. But first, she recommends that he sleep and preserve his strength before the trials of the second floor.

Bam awakens in a field of tall, golden grass to see a floating cube welcoming him and the Regulars to the second floor. The cube explains the rules of this testing ground, that the 400 participants must be whittled down to 200 ... by any means necessary. The cube further explains the Pocket—the device will tell the participants how many Regulars are left in play and how much time they have to remove them. Realizing this means death, Bam begins to run but trips over the Black March. As he regains his footing he comes face to face with a tall man and is pinned down by his massive foot. Bam begs the Black March for strength to no avail. The man prepares to end Bam's life with his enormous kunai blade but Bam is saved by an archer letting deadly arrows fly at Bam's predator. The archer takes aim at Bam himself, but is shot by a sniper's rifle. 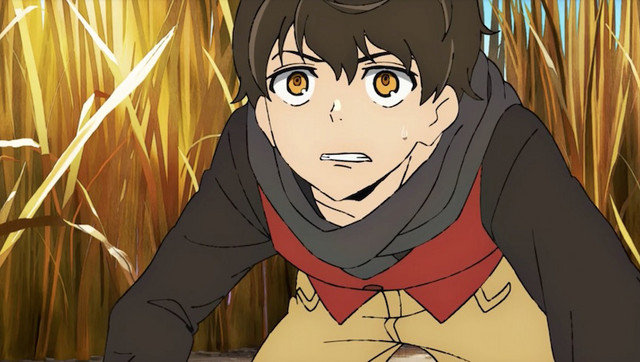 As the sniper uses his scope to search for Bam in the tall grass, a giant, clawed hand gently but firmly grips the side of his head. The Hunter tells the sniper he is in his way and takes his place at the edge of the cliff. Meanwhile, a blue-haired boy effortlessly stops the attack of a four-armed monster with his briefcase. The boy removes a blade from the briefcase, preparing to do his part to lower the number of participating regulars.

Back on the cliff, the sniper takes aim at the Hunter that removed him from his perch. The Hunter simply tosses the rifle aside and warns the sniper he could do the same to him. Turning back to his task, the Hunter observes his competition, zeroing in on a girl he refers to as a "Lizard" and noticing Bam's unusual weapon. 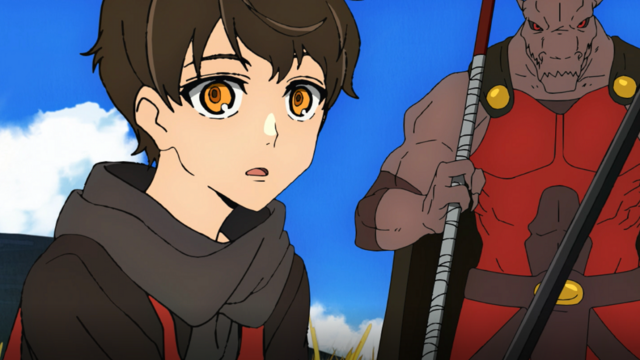 Back in the field, Bam is attempting to steady himself as he prepares to murder a goofy-looking monster with what appears to be a row of multiple eyes. He realizes taking lives will be the only way he can reach Rachel at the top of the tower. Just as Bam is about to take the plunge, the blue-haired boy appears and asks Bam if he would be better off pointing his sword at the man behind him. Bam turns and comes face to face with the Hunter.

Did you enjoy the first episode of Tower of God? How do you think Bam will survive his run-in with the Hunter? Tell us your thoughts in the comments!

Tags
tower of god, recap, crunchyroll originals
« Previous Post
Why Does Crunchyroll Use “Bam” in the Tower of God Subtitles?
Next Post »
Inside Final Fantasy VII Remake Documentary Explores the New Battle System
Other Top News
15 Comments
Sort by:

QUIZ: Which Tower of God Position Are You?