Donyatsu is a Sweet, Unexpected Surprise

May I offer you an adorable donut cat for a sweet slice-of-apocalyptic-life? 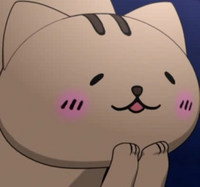 The irrelevant and strange post-apocalyptic world of Yusuke Kozaki’s Donyatsu, a silly slice-of-life series about pastry-inspired critters, is a welcomed and eccentric break from reality. Adapted into a 12-episode original net animation series (ONA) by studio Gathering from Kozaki’s manga in 2013, Donyatsu provides a seemingly standard post-apocalyptic setting with a sweet slice-of-life twist. It dares ask the question—can the end of the world be funny? Can it be about cats and delicious treats while the world burns?

Kozaki’s work has mostly been seen in anime and video game character design—most notably in the Fire Emblem and Pokémon franchises, BBK/BRNK, and Speed Grapher. After debuting in Young Gangan in 2011, the Donyatsu manga soon garnered a cult following for its unique combination of post-apocalyptic story with slice-of-life comedy. I first discovered the series back in 2015 and considered it something of a “hidden gem” at the time through the short net anime. However, I quickly realized that these handful of episodes provided just a glimpse of what the full and bizarre Donyatsu world had to offer. The main appeal of Donyatsu is that it obviously has no large overarching plot—in fact, most of its characters struggle to achieve more than sleeping and eating. Compared to other post-apocalyptic series, the worst of the final blow has already landed and there’s no going back. It's a surprisingly laid-back, empty world. 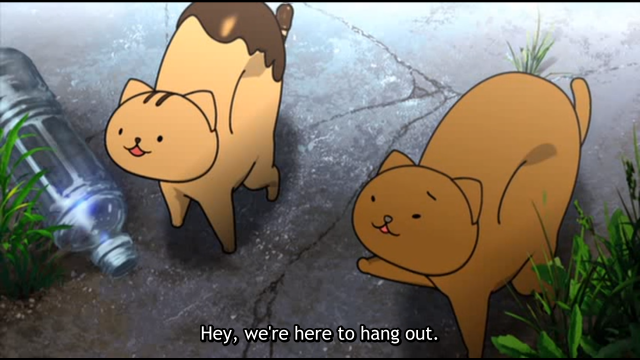 Black Comedy With Sugar On Top

Our hero, Donyatsu, wakes up one day to realize he is now an adorable chocolate donut-shaped cat. Has he been transformed for a human? It’s not clear. The Shibuya streets might be empty, but in lieu of humans are a handful of new friends: Bagel, a basic but stern brown bagel cat; Rollnya, a sweet (you guessed it) roll-themed cat; Baum Cougar, the baumkuchen cat who is also a genius internet hacker; and Kumacaron, the pink macaron bear who loves the in-world "Dragon Fall" manga. There’s also a military squadron of mice who may or may not actually be a threat. Is anyone here terrified by what appears to be a nameless catastrophy? Or civilization as we know it coming to a halt? No, Donyatsu and pals are too busy playing shiritori with a giant space robot instead. Even Baum Cougar, the most prepared of the kitties, is a jab at stereotypical “preppers” and nerds who spend too much time meticulously planning out end-of-world survival scenarios. Will he be their savior in the end times? Well, no. In fact, he’s sort of a creep. They’re all jerks. 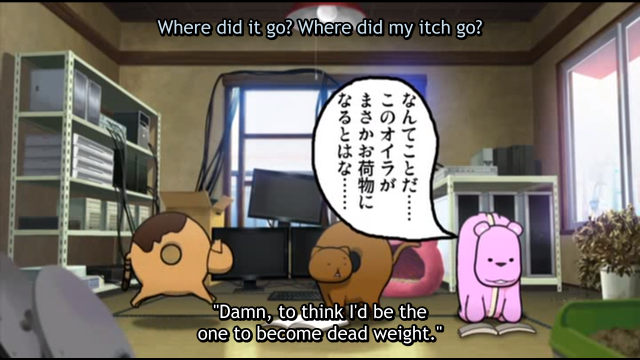 Ironically, despite being friends, Donyatsu and pals all kinda hate each other. Unlike other laid-back slice-of-life series, these characters truly have no choice but to involuntarily put up with each other. Donyatsu is bullied by the others in almost every episode. At first it’s a bit odd, since these characters don’t typically seem like the kind to be mean or spiteful. In the end, it’s Donyatsu himself who ends up being the butt of jokes, who personally admits that maybe he isn’t quite as funny or smart as the others. At first I thought, “well, that’s a little sad,” but over time I came to love it—especially after reading the manga, where Kozaki’s sick and silly sense of humor truly shines. Donyatsu is meant to make you feel good, but maybe at these cute animals' expense.

Rudeness without reason is the point. Despite it being the end of the world, despite being adorable pastry animals, Donyatsu and his friends are still all undeniably, selfishly human. Think of house cats. You think they care when they knock over your priceless, priceless treasures? Hell no. Don’t let the cute demeanor fool you. They are cruel, cruel folks. 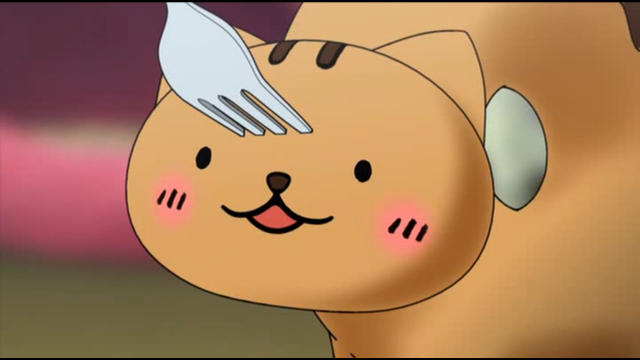 The mice stab Donyatsu with a fork. Ouch.

When I first showed Donyatsu to a friend five years ago, they said it reminded them of the cartoon Adventure Time—which has been confirmed by its creator Pendleton Ward to also be set in a post-apocalyptic world. When I thought of how strange and illogical those characters acted, I realized I knew why Donyatsu appealed so much to me. What makes Donyatsu’s cutesy, over-the-top post-apocalyptic setting so appealing despite the dreary background story? It might be the humor of cognitive dissonance, that situations like devastated cities and the destruction of human civilization aren’t inherently meant to be “funny” unless you’re very jaded. While the Donyatsu anime itself doesn't fully explore these themes compared to the source material, the understanding that these wacky adventures all take places after a catastrophic, humanity-ending event adds an extra layer to an already strange concept. Cats can’t think that far ahead until there’s a yummy snack at the other end. But us viewers? Their situation really is hard to stomach.

One Donyatsu skit involves Kumacaron reading manga out loud while Donyatsu and Bagel are cooped up in Baum Cougar’s safehouse. Familiarity soon breeds contempt, and in this case just enough contempt for Bagel to smack Kumacaron silly after reading all the over-the-top shounen manga dialogue. In the original manga, the group goes to a supermarket in search of canned goods, but quickly devolves into toilet humor and a strategic joke about karinto cookies (look them up). There's no dramatic build-up or sense of urgency to seek out real survival. It's not that Donyatsu and friends don't care—they're lucky enough to not know they should care. They get fed up with each other, bully and harass, all normally high-stakes, dramatic moments when looking at your last handful of post-apocalyptic survivors, but here it’s just good old-fashioned slapstick. 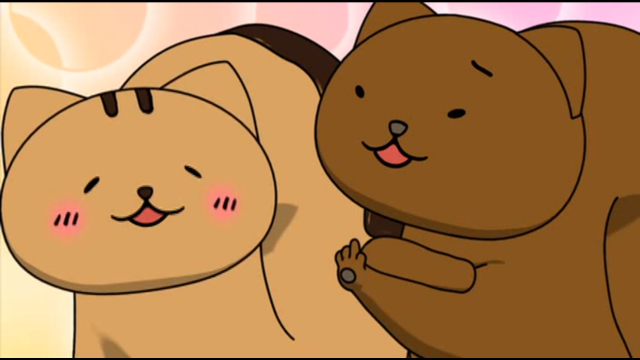 A returning group of characters, the mice, meanwhile, are framed as villains. The joke is, of course, they’re tiny mice with military helmets with forks as their weapons. At first, they seem like they might pose a challenge to Donyatsu, but surprisingly (and albeit with some body horror-esque realizations about how donut cat physiology works…) Donyatsu’s flesh heals itself. You literally can’t eat donut cats. It turns out they are maaaybe immortal. In a perfect world, Donyatsu could let the mice eat him and then just regenerate over a few days—but that’s missing the point entirely. Donyatsu and friends aren’t that preoccupied with “survival” and “consuming” like the mice, so the thought likely has never crossed their mind. They just wanna hang out. In volume two of the manga, Bagel wonders how long they have until they all run out of food and starve to death. It’s a briefly sobering moment that acknowledges these characters might have an actual life expectancy. Everyone is deathly quiet, wondering when they might die. And then it’s immediately back to jokes. There are no hard answers. Can they really live forever? What happens if they eat other donut cats? Who knows. 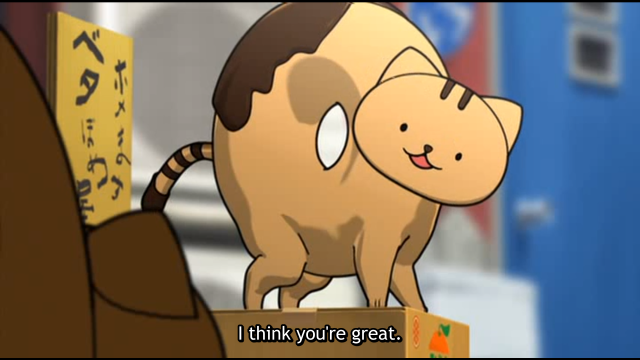 Under the unthreatening frosted and chocolate-dipped exterior is a perfectly blended appreciation for black comedy. Donyatsu is a love-letter to the special kind of dark, but not too dark humor that comes from when you mix idiosyncratic characters with a surreal take on the typical post-apocalyptic setting. This isn’t a story about surviving the end times—it’s about passing the time and making the most out of what should be scary because you're bored, hungry, and stuck in a room with someone narrating an entire shonen manga back-to-front with sound-effects.

It’s no secret that post-apocalyptic stories have been a solid trend in anime and manga for decades. However, there’s now been a recent trend of shows catering toward unlikely fans of the slice-of-life genre. Shows such as Sound of the Sky, Humanity Has Declined—and even Kemono Friends—have all played with the concept of slow, easy-going life amidst the end of the world. In some cases, the fall of humanity is more obvious, especially when your characters are, well, actually human and not adorable sentient food-animals. This "cutesy apocalypse" is an unexpected offshoot of what is universally recognized as a depressing and tense genre full of peril and high-stakes stories. They’re optimistic at the end of the day, and so is Donyatsu. 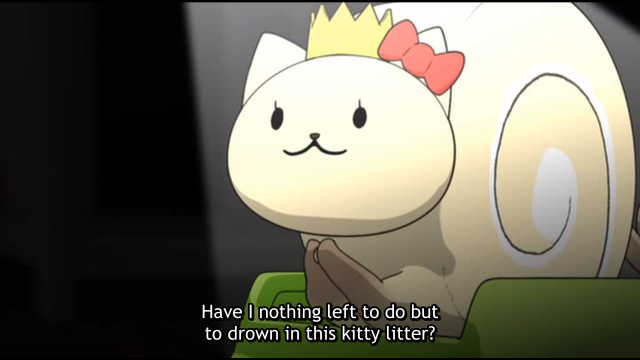 The over-exaggerated pastels and puns of a surreal setting after the end is appealing, if not a good set-up for an ironic punchline. Donyatsu doesn’t use its post-apocalyptic setting as a “gotcha” or shocking twist, but rather embraces it as its entire backbone to ask whether or not people would still get in arguments about fighting game tactics and snacks (the answer: yes). As short and sweet as it is, Donyatsu is an unexpected source of comfort, and a reassurance that weirdness always wins out in the end. If you want a fun escape with tons of cute animals doing sometimes not-so-cute-and-pleasant things, it’s undeniably worth your time.

Have you explored the post-apocalyptic landscape of Donyatsu? Let us know your favorite light-hearted shows with dark backstories in the comments—you might be surprised how many there are!

Blake P. is a writer who loves his cat. He likes old mecha anime, computer games, books, and black coffee. His twitter is @_dispossessed. His bylines include Fanbyte, VRV, Unwinnable, and more.