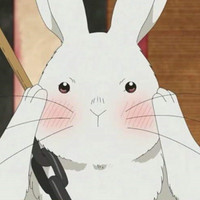 Western Holidays are celebrated a little differently in Japan, as evidenced by Christmas being synonymous with cake, romantic dates, and Kentucky Fried Chicken. But while you may have a hard time finding evidence of Easter celebrations in the anime medium, there's certainly no shortage of bunnies.

This Easter, because we're all about the bunnies, Crunchyroll is getting in the festive spirit of things with a collection of rabbit-inclined characters from various anime, so below please find a list of 7 lucky lagomorphs, arranged in order of most furry to least furry and submitted for your consideration. 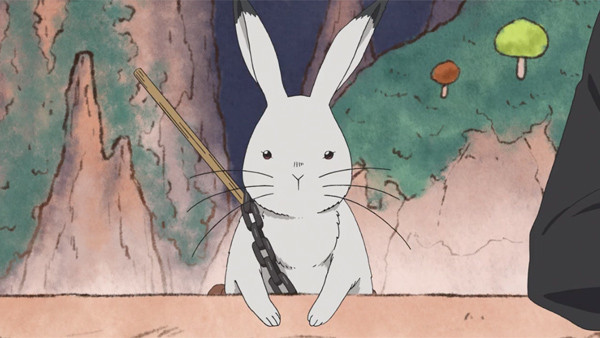 The heroic (and vengeful) rabbit from the "Kachi-Kachi Yama" Japanese folktale, Mustard is a rather mild-mannered mammal who always speaks politely. However, after joining the punishment squad in the Japanese version of Hell, the darker side of Mustard's personality has become abundantly clear, because this paddle-wielding rabbit goes berserk at the mention of the word "tanuki" or at the thought of sinners mistreating animals.

Danger of Mustard stealing your Easter candy: Negligible, unless you're a shape-shifting racoon-dog. 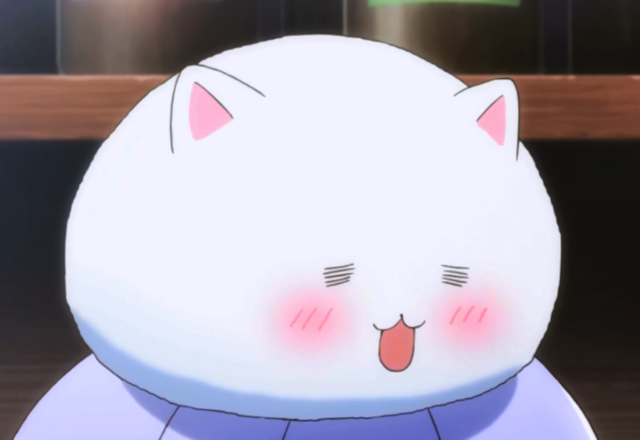 Tippy from Is the Order a Rabbit?

An Angora rabbit and the mascot of the Rabbit House Cafe, Tippy is more of a fluffy furball than a bunny proper. Her favorite pastimes include daintily perching atop of Chino's head and dispensing wisdom and narration in a surprisingly deep and manly voice, since it's heavily implied that Tippy has the spirit of Chino's deceased grandfather residing within her tiny, fluffy body.

Danger of Tippy stealing your Easter candy: High. Chocolate is toxic to rabbits, so for her own good, it's best to watch Tippy like a hawk. 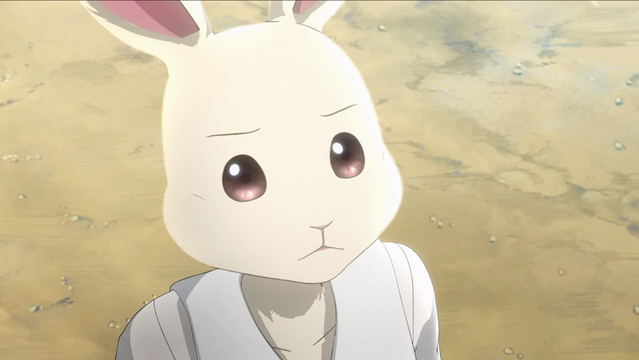 A female dwarf rabbit, Haru has lived her entire life as a perfect target for carnivores due to her small, weak body. But Haru refuses to be victimized, and whether it's standing up to schoolyard bullies or finding fulfillment in flouting the social conventions that try to shame her for freely expressing herself sexually, this tiny bunny has nerves of steel.

Danger of Haru stealing your Easter candy: Low, although she might "steal" your boyfriend instead. 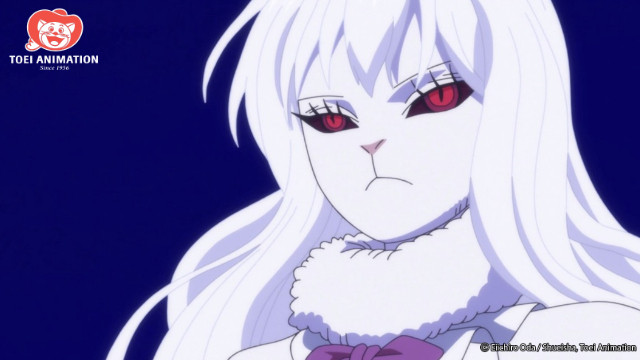 Carrot from One Piece

A Mink Musketeer from the wandering island of Zou, Carrot is currently palling around with Monkey D. Luffy and the rest of the Straw Hat Pirates for adventures on the high seas after stowing away on the Thousand Sunny. Despite her friendly demeanor ("Garchu!" **chomp**) and cuddly appearance, Carrot is also a seasoned warrior, and she's especially powerful when she assumes the bestial "Sulong" battle-form, as illustrated above.

Danger of Carrot stealing your Easter candy: High, since Carrot has a huge appetite, but it'd be more of an absent-minded munching than a malicious act. 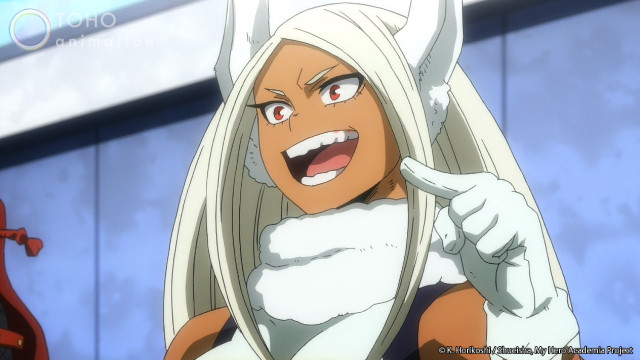 Mirko from My Hero Academia

The Number 5 ranked hero, Mirko is a muscle-bound bruiser whose "Rabbit" Quirk grants her all of the combat prowess of a particularly murderous hare. Although just introduced in the anime, My Hero Academia manga fans have already gotten a taste of Mirko's intense battle skills as she risks life and limb to take down the bad guys, in the process inspiring a level of hormone-infused fan-art that's liable to break the Internet in half. Thanks, Horikoshi-sensei. 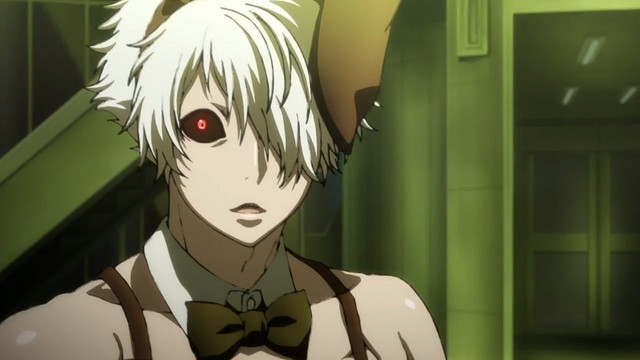 Usagi, Warrior of the Rabbit from JUNI TAISEN: ZODIAC WAR

Say what you will about the concept of "killing psychotically", it's undeniable that squaring off against 11 superhuman mercenaries in a battle royale-style fight to the death while clad in a Chippendales outfit, stiletto heels, bunny ears, and an enormous pom-pom tail takes a certain degree of self-confidence. In addition to being a fashion icon, Usagi, the Warrior of the Rabbit, is also a skilled necromancer capable of reanimating and befriending the people he slays... and he wants to be friends with the entire world.

Danger of Usagi stealing your Easter candy: Low. The Warrior of the Rabbit would never steal from a friend, and you are his friend, aren't you? 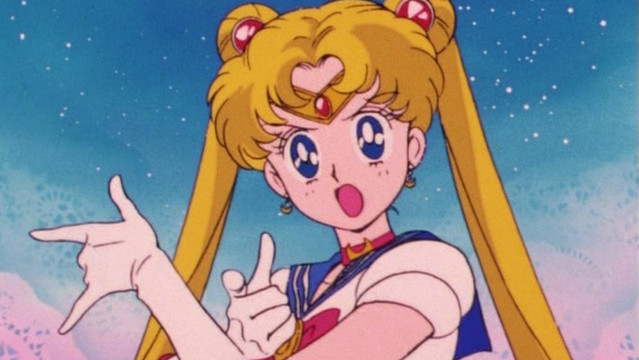 If you're curious why one of the most famous evil-conquering magical girls in anime history is rounding out this list of bunny-themed characters, bear in mind that much of Usagi Tsukino's character is an oblique pun referencing the Japanese folktale about rabbits who live on the moon and pound rice into mochi cakes with hammers. "Tsukino Usagi" can be read in Japanese as "bunny of the moon", and her famous twin-tail hair-style is also supposed to resemble rabbit ears.

Danger of Usagi Tsukino stealing your Easter candy: Sailor Moon poaching your Easter candy is a near certainty, as she has a sweet-tooth and is known to stress-eat. Still, sharing some chocolates and jelly-beans is a small price to pay for her constantly saving the universe from baddies. 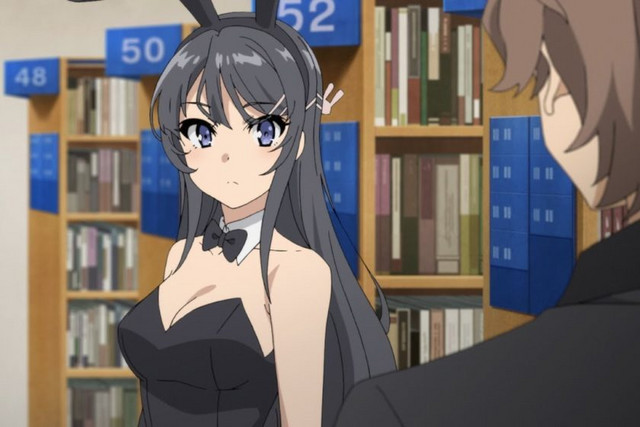 The above list is not meant to be exhaustive, and there a plenty of bunny and bunny-adjacent characters worthy of honorable mentions, such as Mai Sakurajima, the titular heroine of Rascal Does Not Dream of Bunny Girl Senpai, and Ryo-Ohki, the cat / rabbit / spaceship mascot character from the Tenchi Muyo! series.

Did your favorite lagomorphs make the list? Are you pleased with the results, or does the outcome leave you hopping mad? Be sure to let us know in the comments section below, and don't forget to have a very hoppy Easter.

Tags
easter, one piece, my hero academia, juni taisen: zodiac war, is the order a rabbit?, sailor moon, hozuki's coolheadedness, beastars
« Previous Post
RECAP: Nami, Brook, and Robin Get a Chance to Shine in One Piece Episode 928
Next Post »
When Does the Next Ghibli Movie Come Out?
Other Top News
14 Comments
Sort by: