Hime's Recommendations for What to Watch If You Like KONOSUBA

Get your watch lists ready and start your next big marathon! 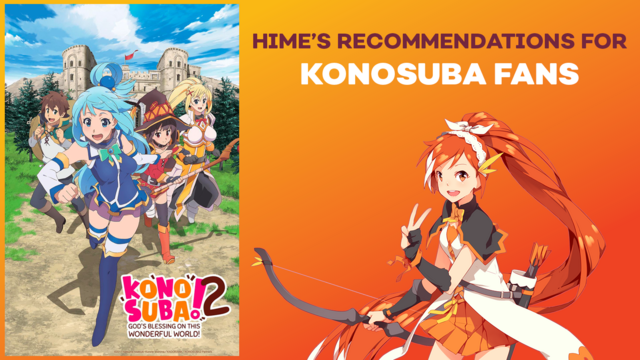 Speaking from experience, the only thing you're likely to want to watch after blasting through both seasons (and the movie!) of KONOSUBA is more KONOSUBA. This is totally normal, but I can't just watch KONOSUBA every day for the rest of my life, so I turned to Crunchyroll-Hime for some recommendations to get me goin'. If you loved the adventures of Kazuma, Aqua, Megumin, and Darkness, here are a handful of shows you should add to your watch list immediately!

Beyond the fact that Kazuma directly calls her out for it almost immediately, if there's anyone who falls into the "chunibyo" category it's Megumin. In KONOSUBA, her explosion magic is no joke, but she definitely takes the theatrics and backstory of her role as an Arch Wizard of the Crimson Demon Clan to the next level. If you think Megumin is intense, just wait until you meet the Dark Flame Master himself, Yuta Togashi, in Kyoto Animation's excellent adaptation of Torako's Love, Chunibyo & Other Delusions light novels.

Check it out if: You prefer Megumin at her most delusional, eyepatch and all.

Whether he wants to admit it or not, Kazuma is a shut-in NEET whose only prep for his new life in a fantasy world is his experience with video games. In NEW GAME!, Aoba Suzukaze also pulls a ton of inspiration from games. She just, you know, actually uses it constructively in her new job at game developer Eagle Jump. Think of this as another way to watch someone level up on a regular basis!

Check it out if: Like Kazuma, you're way into games and want to dive into the world where they're made and the lovable characters that make it worth visiting.

In KONOSUBA, Kazuma dies an embarrassing death and is resurrected in a fantasy world in which he can obtain unimaginable powers and learn to wield magic. In Bakemonogatari, Koyomi Araragi survives a not-so embarrassing vampire attack and finds himself human again but with the side effect of several superhuman abilities. Both are attempting to live normal lives in totally abnormal circumstances, one just happens to be less embarrassing than the other.

Check it out if: You want to imagine a world in which Kazuma didn't die a fool's death and was instead bitten by a vampire and fated to live a much cooler life.

One of the charms of KONOSUBA is the fact that, at the end of the day, the battles don't really matter. In fact, half of them come about because of something Aqua unknowingly caused, and if they didn't keep sticking their noses where they don't belong, the whole crew could probably live a pretty uninspired life together. Sounds kinda like the When Supernatural Battles Became Commonplace anime, which sees the five members of Senko High School's Literature Club developing superpowers only to find that this is all par for the course. In their world, much like KONOSUBA's, these battles are just, like, what you do.

Check it out if: You cared both deeply and not at all about the outcomes of KONOSUBA's battles.

AHO-GIRL's Yoshiko Hanabatake is described as "an idiot through and through." Sound like anyone you know from KONOSUBA? Oh, does it sound like everyone you know from KONOSUBA? Like most of KONOSUBA's cast, Yoshiko can't take a hint to save her life, but thankfully she has a cast of supporting characters with their wits about them. If you like your idiots extra stupid with a dash of dum-dum — I'm talking all zeroes on a multiple-choice test, reverse-galaxy-brain type stupid — you'll love AHO-GIRL.

Check it out if: You wish KONOSUBA had a few more normal characters to offset the smooth brains of its main party.

Who knows when we'll get to continue our explosive journey with Kazuma and co. in KONOSUBA, so there's no better time than now to binge some anime in a similar vein. Let us know what you end up watching, or what you've already seen in the comments!

FEATURE: Get Ready For Spring Break With 6 Anime Beach Episodes We Love