What I Learned After 'Outgrowing' Card Game Anime

You activated my trap card! Angst and drama! 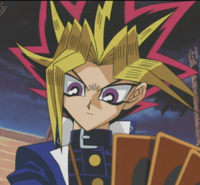 My first favorite anime was based off a massively popular trading card game. Or rather, it might be better to say the massively popular trading card game turned it into what I love. Long-running franchises like Yu-Gi-Oh! haven’t always been about card games, but the parts people remember best always seem to center the game’s consequences: the glory of winning, the heartbreak of defeat, the fiery passion of competition. Recent shows like Cardfight!! Vanguard and the current Shadowverse both follow a similar formula. And also like my other earliest anime loves — red hot shōnen fighting and sports series, the kind full of epic tournament arcs and match-ups — these card shows also chase those high highs and low lows. For as uncool and dorky as a competitive trading card game might sound on paper, I keep finding myself being pulled back in. Not because I’m a technical nerd or obsessive with the mechanics of epic children’s card games but, just like the most epic of spectator sports, I’m always down for organized smackdowns.

Is Rock Lee dropping his weights no better than slamming an Exodia and subjecting your opponent to permanent ego death? With card games on my mind, it was time for me walk down memory lane and find out for myself. 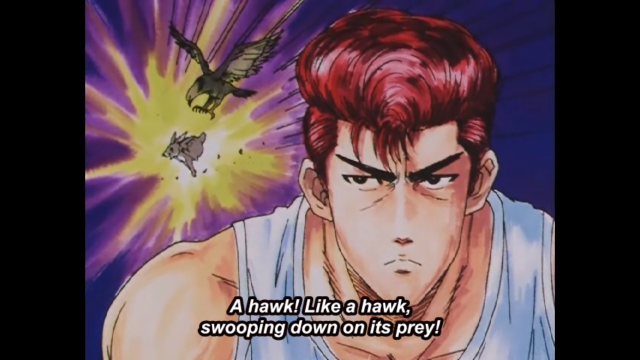 “That means you haven't known the triumphs and defeats, the epic highs and lows of high school basketball"

Everyone knows what sports anime are all about: underdogs joining a team, befriending rivals, winners and losers. Most importantly, the whole world revolves around an organized sport with clearly defined rules. In other words, you thrive under competitive pressure or don't — you make the team or don’t. Series like Captain Tsubasa tremendously popularized the sports genre during the '80s, and with that, spearheaded the classic tropes of that genre. An emphasis on the young male demographic beget the rise of popular sports manga like Prince of Tennis and Slam Dunk in magazines like Weekly Shōnen Jump. With Slam Dunk ending its serialization in Jump in June of 1996, Kazuki Takahashi’s Yu-Gi-Oh! would begin that subsequent September in the same year, right at the tail-end of that sports manga’s fever-pitch popularity. Closely following in 1999 was the Wizards of the Coast-sponsored Duel Masters franchise aimed at a younger audience, further cementing the card game genre’s place in the male demographic. Stories hyper fixated on a singular competitive game were still hot — even if they didn't assume the standard sports-themed shape. 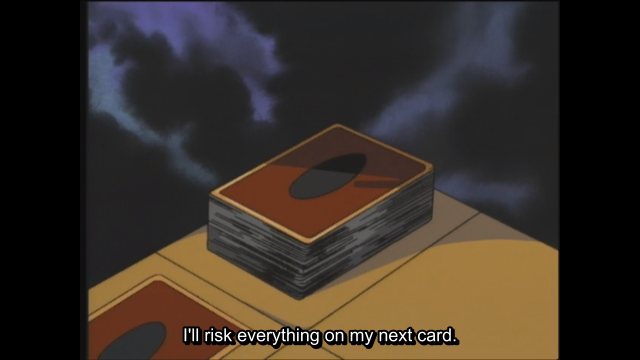 Simultaneously publishing alongside Jojo’s Bizarre Adventure: Golden Wind and a continuation of Captain Tsubasa, Yu-Gi-Oh! focused on a very broad definition of “games,” making it initially an odd bird among Jump’s typical battle and sports line-up. But that doesn’t mean it wasn’t compelling. After the appearance of the in-series trading card game “Duel Monsters,” demand for a real-life counterpart became so overwhelming that publisher Konami eventually released the game’s first set in 1999. Since then, the card game itself has become the primary force in the series plot. Characters resolve conflicts through card games in flashy duels where, despite just standing around, they revel in quote-worthy monologues about attack phases, trap cards, and their tragic backstories. With that plot integration came a whole new way of exploring larger than life stories, something better than plain advertising. In lieu of special moves or kicking soccer balls, the card game scenario created its own organized ecosystem of winners and losers. There are rules — and if you break them, well, the consequences can be far worse than a bad day at the hobby shop. 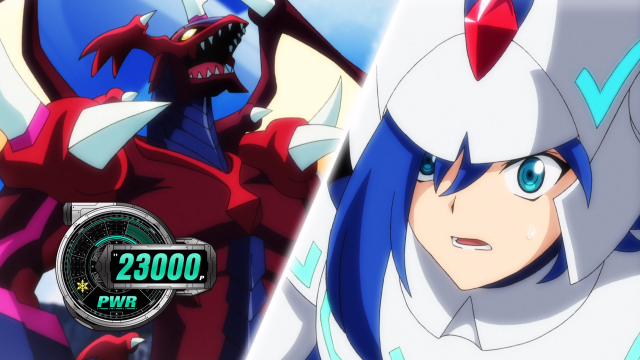 Unlike a typical sports anime, a card game’s rules aren’t always obvious. Everyone knows what basketball is. But what does it mean when your life points drop to zero and you’re exiled from a plucky gang of card game-playing teens, forever destined to angst and booster packs? At first glance, it’s hard to find the real stakes in losing a card game. For example, series like 2011’s Cardfight!! Vanguard don’t necessarily start off on such a dramatic note compared to the heavy hitters like Yu-Gi-Oh. Based on the trading card game published by Bushiroad, Cardfight introduces us to Sendou Aichi, a seemingly hopeless and insecure kid in a world full of deck-wielding jocks. He’s a far cry from the typical hyperactive Jump protagonist. But after years of indulging in bigger-than-life characters dueling for their lives on top of blimps and virtual reality, I found Sendou to be a breath of fresh air. He’s a total newbie and, to be frank, probably more patient than I could ever be when it comes to learning the ins and outs of a competitive tabletop game. 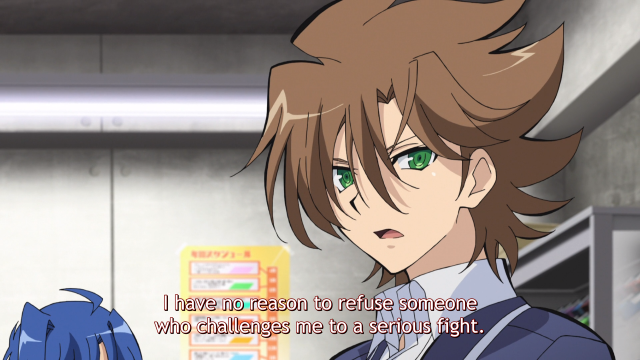 The more I dove into Cardfight, however, I realized it wasn’t really about mastering the rules or whatever obscure stratagems this week’s bully had up their sleeve. Sure, it’s not meant to be overly complicated, but I couldn’t help deciphering the same story patterns that made me love competitive arcs of shōnen anime in the first place. Like Naruto’s famous Chūnin Exam arc or Yu Yu Hakusho’s Dark Tournament storyline, the context of an organized event changes everything. And best of all, these games characters play are a slow burn, meticulously planned — everything is a mind game.

The earliest parts of Cardfight are spent laying out the rules of the game, but after that, it’s all about Sendou gaining confidence and finding camaraderie. In his first match, he uses a monster called Blaster Blade as his “vanguard,” a kind of astral persona he takes on. Dressed up in Blaster Blade’s armor in Cardfight’s visualization of the playing field (sorry, no Kaiba Corp hologram technology here), Sendou’s adoption of the game as a vehicle for working out anxiety couldn’t be more obvious. Instead of a scared kid, he's now a confident knight, thriving on the astral battlefield. With all the rules on the table, what's left to learn other than the existential aches of teens dueling out adolescent troubles? 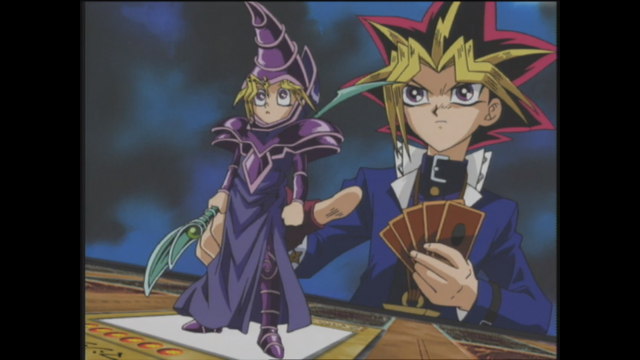 Admittedly, this moment in Cardfight reminded me of Yu-Gi-Oh’s earliest episodes. During the Duelist Kingdom arc — a competition hosted on an island — protagonist Yugi duels against classmate Bakura. With the use of Bakura's “Change of Heart” card, Yugi and company’s spirits are forced to inhabit iconic duel monsters on the field while Yami, the Egyptian pharaoh possessing Yugi, commands the match. Trapped Yugi and friends are depicted as roleplaying in cosplay — acting out attacks and mock dying. After Yami wins, everyone returns to their bodies as though nothing happened. However, the symbolic implications of this episode are obvious. Not only are our protagonist's psyches tied up in their cards, but so are their sense of worth and how they see themselves. These games give us the very special privilege of seeing their inner-lives uncoil with every attack phase, card draw, and strategic retreat. 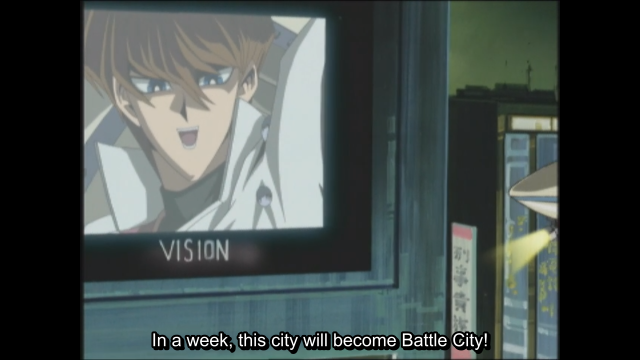 Seto Kaiba loudly announces his new dueling tournament from a blimp, because of course why not

I’ve tried watching real, high-stakes world title trading card game matches. They’re boring. No one is astral projecting into the body of a cool sword guy. Tournament-style arcs like Yu-Gi-Oh's Duelist Kingdom and Battle City will always have a special place in my heart for their outrageous seriousness. The card game anime is inevitably tiered: you learn player backstories, their shortcomings, their hubris. Everyone, no matter their eccentric gimmick, has a story hook. Learning niche mechanics and why a kid is emotionally imprinted on a mass-produced trading card is its own shibboleth. Not “getting it” otherwise leads to everything looking just plain silly. The closest real-life comparisons I can think of are the melodramatic reels that play right before wrestling matches or the Super Bowl. What’s to lose? Not the game. But the legendary, mythic athletic persona behind the player.

Regardless of arcane gameplay, gibberish, or flashy cards, the unchallenged fiery hype and love that goes into fleshing out this particular genre and its characters is what keeps dragging me back in. I might not get a lick of what activates a card trigger or the hot new meta. I can always learn that later. Underneath the exaggeration and dramatic card tricks, however, was a sincerity I didn’t expect to find even though I’m older. Despite my time away, maybe the heart of the cards never truly left me after all.