The Bizarre Claymation History Lesson You Can Watch on Crunchyroll

Welcome to a surreal Olympics across time and space 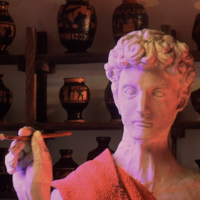 Nothing is sweeter than victory. With victory comes honor — and who wouldn’t want a little glory and riches in smalltown ancient Greece?

Unfortunately, Demetrios would rather stay inside and paint Greek urns. To everyone’s dismay, the protagonist of Extra Olympia Kyklos is a lover, not a fighter. Adapted from Mari Yamazaki’s 2018 comedy manga, this series is the classic tale of a himbo-by-day, artist-by-night dealing with the everyday woes of ancient Greek life, unrequited love, and of course, time-travel.

According to historians, the earliest Olympics held in ancient Greece took place in honor of the god Zeus. Only men were allowed to participate and would be horribly shunned by their villages for losing. Meanwhile, in 1960s Tokyo, everyone is more than happy to race and swim without fear of being beaten to death. One day, Demetrios is quietly minding his own business, wondering how in the world he will woo the mayor’s beautiful daughter. Suddenly, lightning strikes. He wakes up in a weird farting old man’s bedroom in Tokyo, where the Summer Olympics are taking place. Afraid and confused, Demetrios has no clue why people continue to participate in such a strange event. Have they all gone mad? 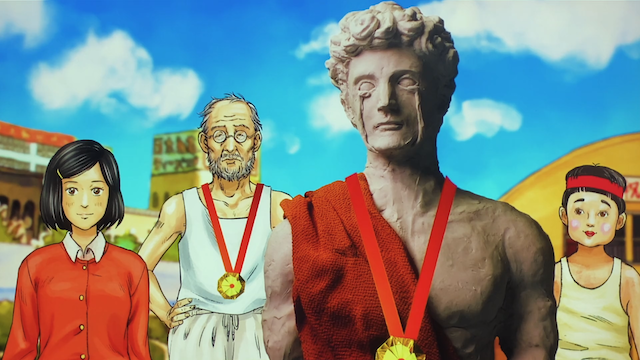 Demetrios wins a paper medal at a Tokyo field day

Or maybe — people never really change after all. But they do wear more clothes nowadays.

Extra Olympia Kyklos is a surrealist, claymation isekai with a degree in classical studies. Demetrios, for all his introverted tendencies, isn’t so different from a modern shut-in who wants to play games all day or refuses to join a sports club at school. He desperately wants to impress a girl but is deathly afraid of athletic competition. At his worst, he literally shrinks his body and hides inside a jar like the philosopher Diogenes of Sinope. This sort of historically-informed, anachronistic comedy is one of Yamazaki’s trademarks, most notably demonstrated in her series Thermae Romae, which received an anime adaptation in 2012. 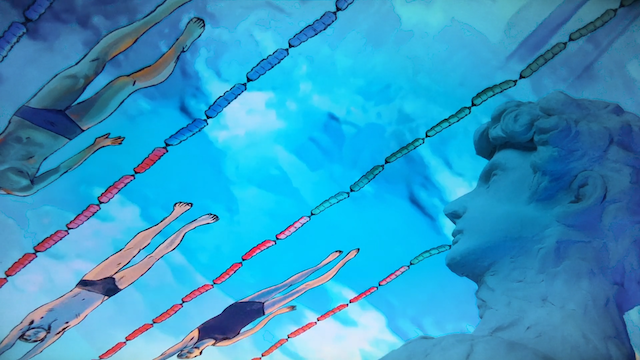 Demetrios suddenly finds himself at a swim meet

Olympia extends this bit with a heavy emphasis on ironic visual comedy, carefully navigating between the uncanny valley and the instantly recognizable beauty of ancient Greek sculpture. Instead of stoic expressions, Olympia’s characters contort with all flavors of fear, disgust, and cartoonish despair. In juxtaposition, 1964 Tokyo is depicted as two-dimensional and flat, full of puppet-like manga characters in an over-saturated world. Aesthetically, Tokyo and ancient Greece couldn’t be any more different. But as Demetrios continues to be zapped across time and space each episode, those differences are seemingly whittled away — perhaps the Olympics of this world isn't so scary after all? 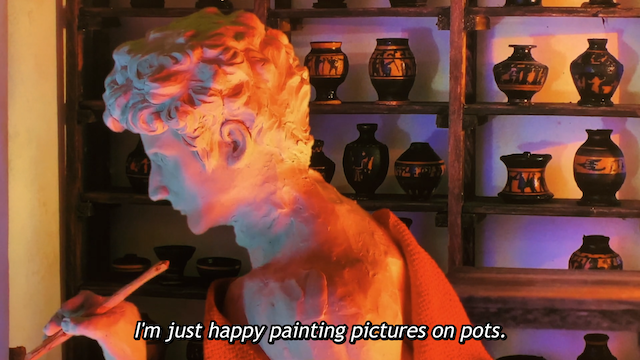 Unsurprisingly, Demetrios’ commitment to his art and his eccentric personality adds another layer to Olympia’s comedic flavor. Overly confident in his work, he is horrified to find that not only do modern textbook scholars find his art perplexing, but wonder what supposed purpose such “stupid” images had in ancient Greek society. Whether intentional or not, Olympia’s use of time-travel makes a clever point about the extraordinary value applied to every fragment of the past. For all the importance we place on understanding ancient civilizations, it suggests even scholars sometimes forget people just did things because they could. 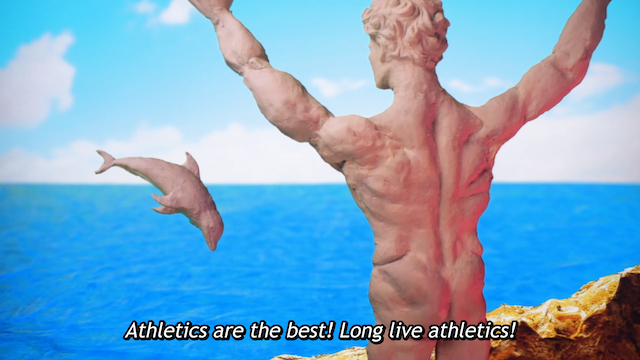 The Olympics: No underwear required!

Besides Demetrios’ antics across time periods, Olympia also offers a surprisingly in-depth amount of historical trivia. Each episode ends on a cheeky, educational song about ancient Greek society, all accompanied by a surreal combination of live-action and claymation. Think of late-night educational programming for adults, spliced with Monty Python's Life of Brian’s gallows humor and Jojo's Bizarre Adventure’s campy style. If you’re a lover of classical studies and oddball comedy, this wacky, fast-paced trip across Olympics history is definitely the perfect lesson for you.

Are you enjoying Extra Olympia Kyklos this season? Let us know in the comments below!