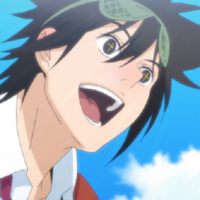 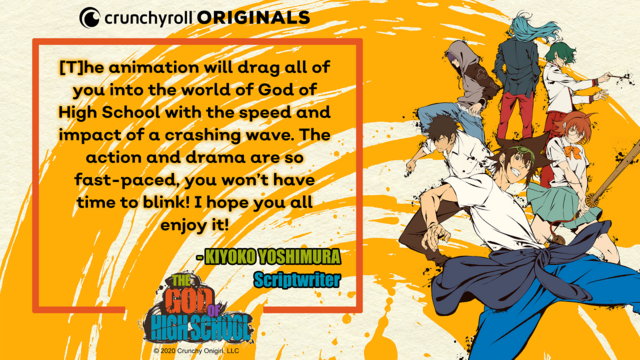 The God of High School, the newest project in the Crunchyroll Originals lineup, is easily one of the most anticipated titles this season. This action-packed martial arts anime based on the hit WEBTOON series by Yongje Park launching TODAY is for sure the show to check out this season for your shonen battle fix!

How did you get your start in writing for anime?

I’ve always watched a lot of anime because I enjoy it, but I didn’t aspire to be a scriptwriter right from the beginning. I was an otaku who hoped to be a light novel author and submitted my writing to magazines all the time. I just happened to meet a certain famous scriptwriter on a certain anime fan site, and we started communicating by email. At the time, there was a shortage of anime production staff due to a sudden explosion in the number of anime series being broadcast, so that writer asked me if I wanted to try writing scripts for the project they were doing the series composition for. That project was Jibaku-kun, and I was already a fan of its author, Shibata-sensei, and I was able to dive right into the project since I had already read the manga. So that was my first success, and it was the starting point in getting to where I am now. 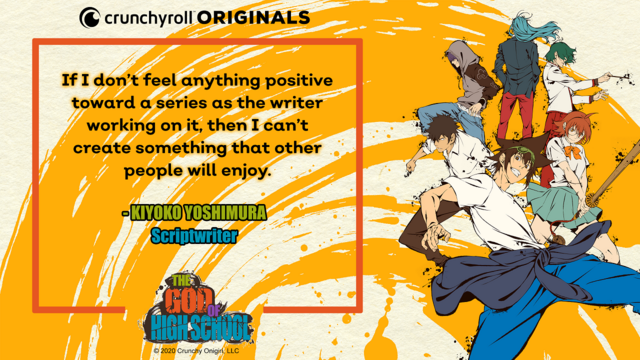 What particular challenges do you face as a writer when adapting a script for anime from existing source material?

When I’m in a creative role, I look for the things I personally enjoy and find appealing in the series, whether it’s the characters, the worldview, or the setting, and I focus on those positive feelings as I write. If I don’t feel anything positive toward a series as the writer working on it, then I can’t create something that other people will enjoy. From there, I write the scripts based on consideration of the visuals that the director wants, what everyone hopes the anime will be, and a web of other opinions.

Are there any common challenges about writing for anime that fans might not realize?

This connects to question 2, but I’m generally the type that prefers to write anime based on positive feelings toward it, whether it’s “This is fun,” “I like this,” “This is really interesting,” or “This is so cool.” It makes me happiest when viewers look at something I thought was awesome, and talk about how awesome it is.

How did you come to work on The God of High School?

I worked with Director Park on MAPPA’s VANISHING LINE, and Producer Otsuka asked me to work with them again on this project. VANISHING LINE was very well-received and showed me how amazing Director Park’s work is, so I accepted the job immediately. Also, I personally love battle stories and tales of young people growing up. 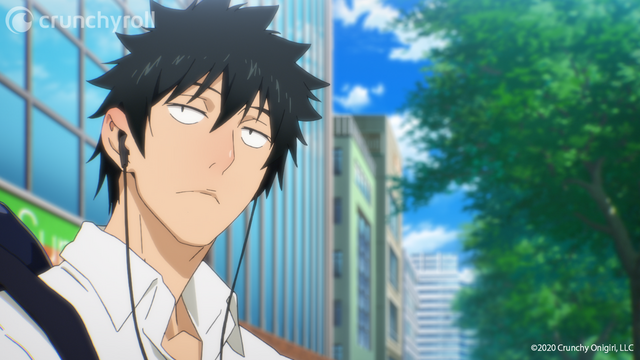 I didn’t really notice that many differences. As far as writing scripts goes, I think the best thing about shows based on manga is that the visual composition of each scene in the story already exists, and we can see the image we want to create right from the start. And in GOH’s case, the art and composition of the battle scenes look amazing, so those are the main benchmarks I use to write the scripts.

What about The God of High School’s story drew you to it most when reading through the original source material?

The fact that Mori, Daewi, and Mira start out so distant, but gradually grow closer and more bonded as teammates. Then, after Ilpyo comes into the picture, the scene where the four of them are seen walking away shoulder-to-shoulder really moved me. And also Jegal’s life of unanswered hopes ... He’s an antagonist, but just condemning him alone won’t fix things, and that really made me think about how harsh that kind of world is.

Could you walk us through a day in the life of a scriptwriter? How do you manage your time throughout the day?

An anime writer’s job basically consists of weekly meetings to read each other’s scripts, discussing problem points, going home and making corrections, then resubmitting them and meeting to read them again. It’s quite a mundane cycle. And working on GOH isn’t all that different from working on any other anime. Our meetings involved a lot of staff living in other countries, so we had a lot of remote meetings, but that’s about it. As for my home life, I’m also a mother with a son in elementary school, so I make his breakfast and send him to school in the mornings, help him with his homework, clean the house ... and do some writing in between. When things get really busy, I ask my own mother, who lives in my neighborhood, to help with some of my housework. I can’t express how grateful I am for my family.

What is the process like for composing a script, from beginning the project to final delivery?

The process varies a bit depending on the project, but generally, when I’m doing series composition, I start by coming up with a rough draft of the series as a whole, which is reviewed and discussed by the director and staff. Then we move on to each individual episode’s plot ... deciding what role the number of episodes will play in the series, determining the points where developments happen, and rationing out the work, and from there each writer starts working on their scripts. Occasionally, we’ll be working on a script for a later episode that ends up depicting some development that will require an earlier, not-yet-complete episode to be written in a certain way, so we make those adjustments as needed. When the scripts for all episodes are finished, we pass them along to the production and animation departments, and that concludes the writer’s role. From there, we look forward to seeing the finished product along with the fans! 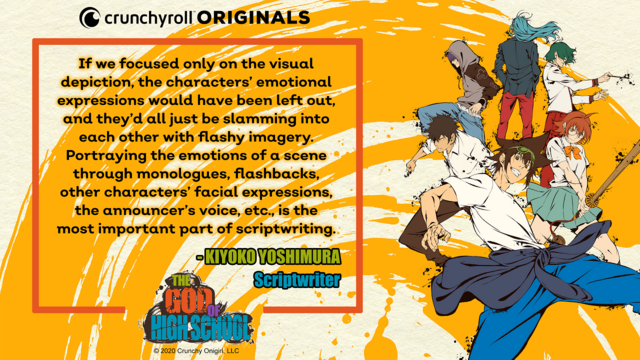 Could you tell us how exactly a fight scene looks when you script it? How much of the flow of the battle is in your script?

I’ve heard that with things like live-action and tokusatsu series, the fight scenes aren’t written in detail in the scripts; instead, they’re composed right there on the scene by acting and filming specialists. But most anime projects call for fight scenes to be depicted in some degree of detail in the scripts. It directly connects to the time allotment and required number of drawings for the episode, so that needs to be controlled in the scriptwriting stage. At a bare minimum, the script needs to explain who does what, and what effects it has. I don’t usually write every single punch and kick in detail, but in a scene where, for example, a character who was thought to be right-handed suddenly uses their left hand and wins, those details need to be clearly written in the script. In the case of GOH, the battle scenes are composed in very fine detail in the original work, so I generally followed suit in the anime scripts. The most important thing was to make sure the changes in the characters’ feelings as they fought were in agreement with the visual highlights of the animation. If we focused only on the visual depiction, the characters’ emotional expressions would have been left out, and they’d all just be slamming into each other with flashy imagery. Portraying the emotions of a scene through monologues, flashbacks, other characters’ facial expressions, the announcer’s voice, etc., is the most important part of scriptwriting.

South Korea is a fairly novel setting for an anime. Did writing for a real-world, non-Japanese setting affect how you approached your work at all?

While most anime produced in Japan are also set in Japan, there are also many that aren’t, so I didn’t notice that much of a difference. VANISHING LINE, which I worked on with Director Park, was set in America! Still, even though Japan and Korea are geographically close, their languages are quite different (especially the pronunciation), so I did struggle a bit with things like proper nouns and place names.

Action shows like The God of High School are never just action shows, they also have plenty of comedic and emotional aspects to them as well. Are there any specific tonal scenes you enjoy writing most?

One is Mori’s birthday episode. It’s a scene where everything he’s accomplished comes together in the form of a strong bond. Murakoshi-san, the writer of that episode’s script, made that scene extremely emotional. Another is the final preliminary round between Mori and Daewi. It’s the first major climax in the series, and Daewi’s personal drama becomes deeply involved in it, so I tried my best to make it a really intense scene. 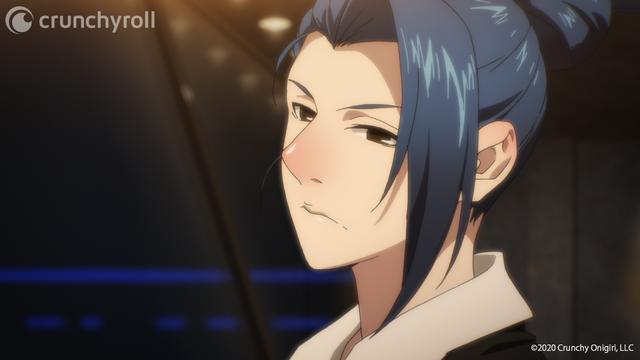 Is there any character in The God of High School you’ve enjoyed writing the most?

All the characters do have their own unique charms, but it’s hard to choose just one since it’s much more fun to see how they all bounce off of each other. They’re all strong, remarkable characters, but they have playful sides and even some cute weaknesses that are brought out so skillfully when they’re interacting. Mori and Daewi, Daewi and Mira, Ilpyo and Jegal, Commissioners Q and O, Commissioner Q and Daewi, Taejin and young Ilpyo ... yeah, I just can’t choose (lol)

The God of High School is, of course, one of the newest Crunchyroll Original productions coming soon. How has working on this production compared to other standard ones you’ve been a part of?

Director Park came up with several highly ambitious plans, and he was very passionate about making them into reality, so I couldn’t help feeling like this project was going to turn out well worth all the effort. It was very exciting to work on, and I’m excited to see it when it airs.

Finally, do you have anything you’d like to say to fans eagerly anticipating the anime’s debut this summer?

All of us on the anime staff devoted everything we had to faithfully recreating the intense developments of the original work in animated format. Unlike manga series that you take your time reading at your own pace, the animation will drag all of you into the world of God of High School with the speed and impact of a crashing wave. The action and drama are so fast-paced, you won’t have time to blink! I hope you all enjoy it!

Danni Wilmoth is a Features writer for Crunchyroll and co-host of the video game podcast Indiecent. You can find more words from her on Twitter @NanamisEgg.
Do you love writing? Do you love anime? If you have an idea for a features story, pitch it to Crunchyroll Features!
Tags
the god of high school, gat obeu hai seukul, goh, god of high school, 2020 anime, crunchyroll originals, mappa, kiyoko yoshimura, webtoon, webtoon series, interview
« Previous Post
The 10 Best Pieces Of Straw Hat Crew Fashion
Next Post »
The Violence Action Manga Has an Adaptation in the Works
Other Top News
18 Comments
Sort by: