From Bakeneko to Bakemonogatari: The Secret History of Catgirls

What's a catgirl to a nya-believer? 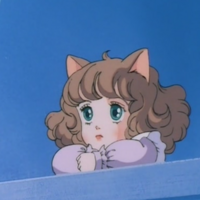 It’s a question society has asked for ages: what came first, the cat or the girl?

The catgirl is one of the most resilient images in anime today. However, even the term “catgirl” is a little vague. Close your eyes and try to imagine what that word actually means. Did you think of a girl, but with cat ears? Did she have a tail? Does she have a verbal tic? Was she — by some mystical, scientific, or by some other supernatural occurrence — able to transform into an actual cat? If you said yes or no to any of those questions, are we still talking about the same kind of “catgirl”?

The answer is no one really knows. But that hasn’t stopped people from trying to investigate the origins of this immensely popular character type. Does such a thing as "the first catgirl" truly even exist? 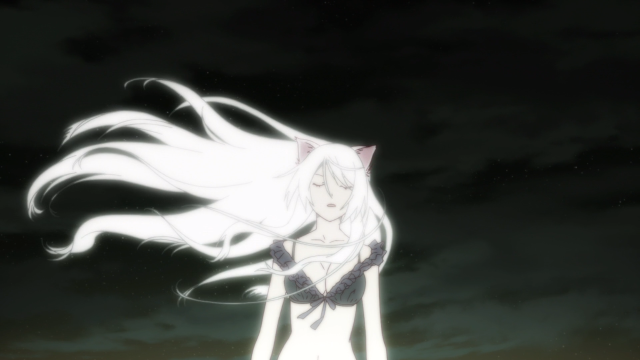 Black Hanekawa as she appears in Nekomonogatari

Broadly speaking, characters with animal ears are described as kemonomimi, which literally means animal ears. What about catgirl etymology? As expected, characters with cat ears are described as nekomimi, aka cat ears. The term nekomusume (cat girl or daughter, literally) has also been used, which is also notably the name of the character Neko-Musume from Shigeru Mizuki’s popular 1960s supernatural manga GeGeGe no Kitarō. Ralph F. McCarthy, the first to translate Kitarō in a bilingual edition published by Kodansha in 2002, localized this name as “Catchick.” This is all to say, the invented euphemism “catgirl” is just one of many used to describe the same thing: a cat-like girl who may or may not claw your eyes out with a mischievous smirk.

Mizuki's Neko-Musume is based on the bakeneko, an evil cat spirit who is sometimes able to change between human and feline form. Folklorist Matthew Meyer describes bakeneko as beginning their lives as regular house cats, but later accumulating more human-like traits as they mature. In many stories, they are depicted as lapping up the blood of murder victims, thereby granting them supernatural powers. Of course, they aren’t to be mistaken with nekomata — twin-tailed cat spirits, like Yōkai Watch’s Jibanyan. Much like the rest of Mizuki’s yōkai characters inspired by Japan’s supernatural folklore, Mizuki’s bakeneko are the byproduct of creative license. Neko-Musume doesn’t have cat ears like we might expect them today, but technically she fits the bill for a supernatural entity. Like modern-day big-eyed catgirls, your mileage may vary. 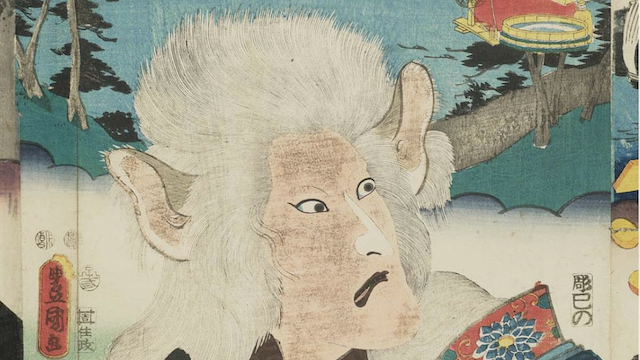 Utagawa Kuniyoshi, a woodblock artist born in 1798, is well-known for his many cat-centric prints. One of his most renowned projects was a series of prints depicting the 1827 kabuki drama, Traveling Alone to the Fifty-three Stations. In 1852, Kuniyoshi printed a depiction of actor Onoe Kikugorō III as one of the play’s most memorable characters, the nekozuka, a cat monster living in Okazaki assuming the form of a human woman. Kuniyoshi draws this specter with two very noticeable cat ears — a statement that this is a suspicious supernatural entity. This same motif reoccurs in other Kuniyoshi works, noticeably a woodblock triptych depicting the same actor as a cat creature. Again, those notorious ears appear. 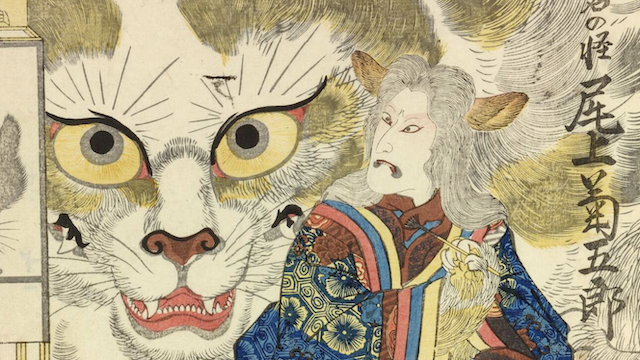 Is Kuniyoshi’s flair for fantastic flourish the missing link? The secret origin of all catgirls who ever dared meow in the modern age? Well, it’s a little more complicated than that.

Will the Real Catgirls Please Stand Up?

The bakeneko is but just one entry in Japanese folklore’s long love affair with cats. In contemporary media, the concept of a cat-influenced woman is seen in many horror films. In an entry on bakeneko for The Encyclopedia of Japanese Horror Films, scholar Michael Crandol writes: "Bakeneko tales were the single most popular subject of Japanese horror films from the dawn of cinema through the 1960s, with more than sixty such pictures released by 1970.” With films as early as 1938’s The Ghost Cat and The Mysterious Shamisen, to post-war modern classics like 1968’s Kuroneko, the bakeneko sub-genre in Japanese horror is a testament to its ubiquity. Not to mention the allure of mysterious intrigue. 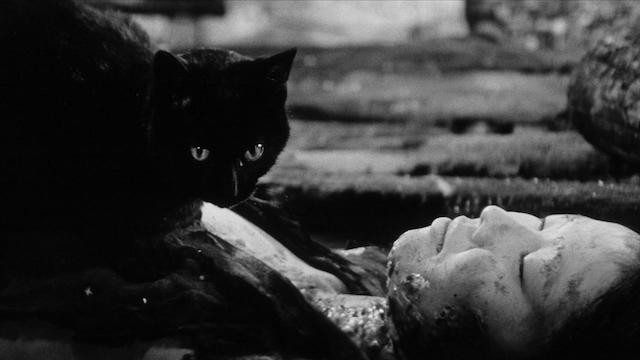 Kaneto Shindo's Kuroneko asks the universal question: will my cat eat me when I die?

From this perspective, the origins of catgirls seem quite hairy. In fact, looking solely through the lens of the traditional bakeneko narrative is extremely limiting. Surely they all aren’t evil women possessed by vengeful spirits? So what else?

In May 2019, independent cartoonist Keiichi Tanaka posted a thread on Twitter asking about the possible origins of the catgirl design proper:

Among the replies included Osamu Tezuka’s character Hecate, a shape-shifting young witch who transforms into a half-humanoid, half-cat creature from the 1950s manga Princess Knight. Others mention Kuniyoshi’s cat-eared nekozuka woodblock prints, alongside the introduction of the classic Playboy Bunny costume in Japan. At first, it seems like Yumiko Ōshima’s manga Star of Cottonland may be the point of origin, but perhaps it’s not so easy to pin down. Did Tezuka, like so many innovations in early anime and manga, do it first? Are catgirls perhaps an underappreciated relic of the Edō period? What about classic '80s shōjo manga? 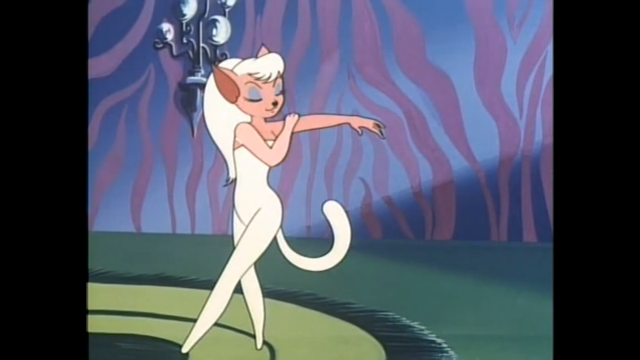 Like many great debates in art history, the conclusion is ambiguous. Some might say Kuniyoshi unintentionally invented “catgirls” in the 19th century. Others may say Tezuka refined the concept, but Ōshima popularized the idea of cat ears on cute girls. If we examine catgirls strictly through the lens of anime and manga, the ambiguity and debate regarding "origins" become less of a fuzzy headache. Rather, we can re-frame the question: What works possibly helped catgirls bloom into the anime and manga-centric phenomenon we know and love today? 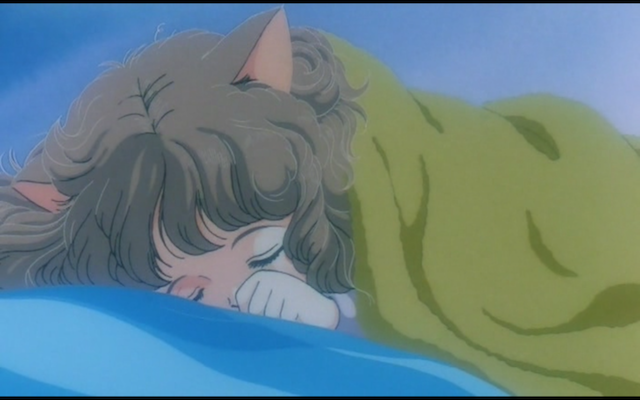 Chibi Neko, a cat who believes she is a girl

Ōshima’s Star of Cottonland was serialized in shōjo magazine LaLa from 1978 to 1987. The protagonist, Chibi Neko, is a kitten who views herself as a little girl. Because of this, the story is illustrated from her perspective and depicts her as human, with the caveat of having cat ears. In her 1995 book, Phänomen Manga: Comic-Kultur in Japan, scholar Jaqueline Berndt points to Ōshima being the possible originator of this now massively popular trope. In 1984, Star of Cottonland was adapted into OVA by Mushi Production, the animation studio famously known for adapting many of Tezuka’s major works.

Meanwhile, another OVA debuted in 1984: Bagi, the Monster of Mighty Nature. This was an original production written by Tezuka himself in response to gene recombination research approval by the Japanese government. Most famously, it featured an anthropomorphic feline woman named Bagi, who is undeniably more cat than girl. Bagi attempts to gain vengeance on humanity while simultaneously forging a troubled relationship with the action-hero male protagonist. While the Star of Cottonland OVA saw a limited home release, Bagi was broadcasted via the Nippon Television Network as a TV special. 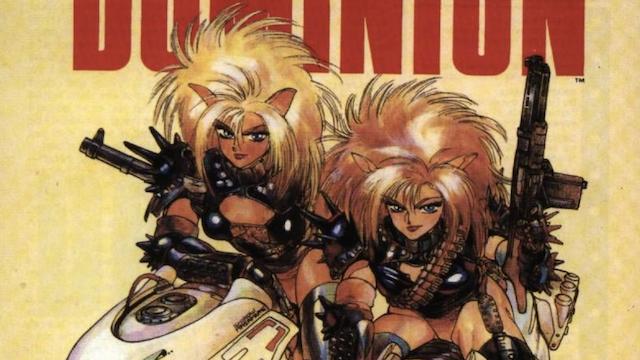 Star of Cottonland and Bagi couldn’t be more thematically different, nonetheless, they both depend on catgirls for their worldbuilding. Masamune Shirow’s 1985 science-fiction manga, Dominion, follows a similar trend with its portrayal of android catgirls in a gritty cyberpunk setting. Adapted into a 1988 OVA series, Dominion: Tank Police features two puma twins, Anna and Uni, catgirls created as sentient love dolls. With their wild hair and overtly sexualized design, they undoubtedly have more in common with Tezuka’s violent Bagi than Ōshima’s initial cat-eared girls. They are, for lack of a better word, an otaku’s modern catgirl with their feral bloodthirst intact.

A Catgirl for All Seasons

A feature from Kadokawa’s Davinci News’ anime department titled "We Investigated ‘Why Are Nekomimi Girls So Cute’” draws attention to the 2013 Fall anime season. Namely, ear and tail-equipped characters from Outbreak Company and Nekomonogatari. What’s the appeal of animal-eared girls, where did they come from, and why are they so seemingly trendy now? Again, Kuniyoshi’s fearsome kabuki portraits are mentioned, however with an important caveat: Kuniyoshi's cat ears were meant to strike fear, not inspire charm. The same could be said for the post-war boom in bakeneko films and their scream queen actresses. The article’s author even suggests that the prominence of the Playboy Bunny outfit, with its appeal to the uppercrust of society and cute tail, might’ve also added to a flourishing nekomimi cosplay craze. At some point, the strangeness of the concept became secondary to cute novelty. 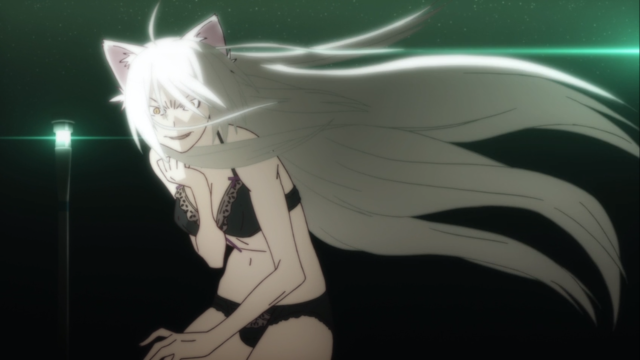 This observation points out an important contemporary trend: ornamental catgirls, aka eyecandy, verus catgirls with a narrative purpose. Peak catgirl is somehow balancing both acts. Characters like Bakemonogatari’s Tsubasa Hanekawa — a high schooler who is possessed by the Sawari Neko spirit — unintentionally create the night-prowling, cat-eared alter-ego named “Black Hanekawa.” Black Hanekawa may perhaps be the modern mash-up of bakeneko tradition and otaku catgirl-ness we've long awaited. She speaks in cat-puns, obviously not human, and is most importantly a fearsome supernatural nuance. But on the flip-side, Black Hanekawa is everything we expect from the otaku’s catgirl: ears on top of her head, an eccentric personality, and a desire to exaggerate those feline quirks whenever possible for cuteness' sake. 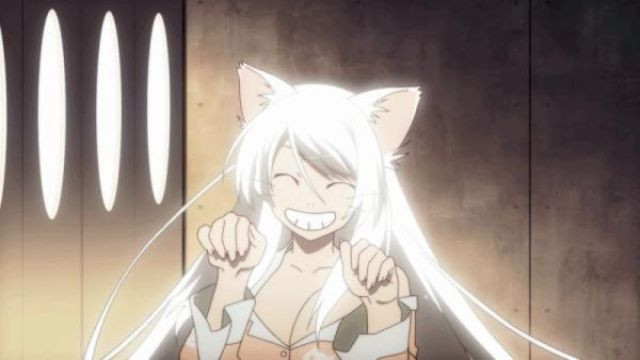 The modern catgirl’s sensibility is to be a girl first, cat second. While hints of this archetype is seen in Shirow’s 1980s catgirl love androids, early 2000s series like Di Gi Charat and Tokyo Mew Mew have only further pushed this specific everyday flavor of catgirl agenda. Especially considering the infectious prevalence of mascot characters like Dejiko, a chibified catgirl with lucky cat bells on character goods stores across Akihabara. It’s no wonder they’ve effectively lost all their unncanniness. But besides the cultural context — there’s no real reason why cat ears just can’t be cute in themselves. 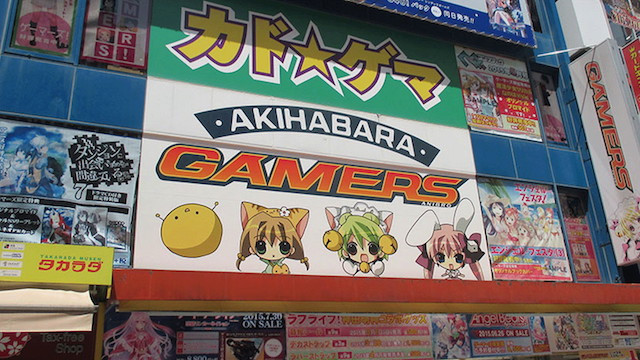 Nowadays, you don’t have to look very hard to find a cat-eared character. Series like Re:Zero famously feature characters like Felix, whose cat-like qualities are part of the lore. Nintendo series like Fire Emblem have even newly added a “beast” race of animal-eared characters. Not to mention the massive popularity of franchises like Strike Witches and Kemono Friends in recent years, catgirls undoubtedly draw massively passionate fanbases. No matter where they came from, catgirls in all shapes and sizes, clawed, and de-clawed, have never stopped turning heads. The nyapocalypse is here to stay, fur-real.

Do you have a favorite catgirl of all time? Let us knyaow in the comments below!

Blake P. is a weekly columnist for Crunchyroll Features. He thinks Cats (the musical) deserves a proper anime adaptation. His twitter is @_dispossessed. His bylines include Fanbyte, VRV, Unwinnable, and more.