ESSAY: In the Middle of the Pandemic, I Watched Anime With Friends 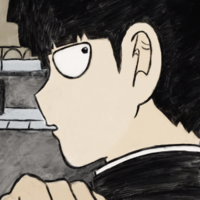 For the past few months I’d been talking to friends at work about starting an anime club. Now that we were heading into 2020, I decided that it was long past time to make those dreams a reality. I reached out to some interested peers, and made a date to meet up and watch. I puzzled over my DVD collection. Perhaps we could watch a great movie, like In This Corner of the World? The first episode of a TV series, like Mushishi or Haibane Renmei? Or I could throw them into the deep end with the first episode of Penguindrum? I eagerly awaited the experience of watching anime together with friends. Then the pandemic hit.

In the following weeks, despite difficulties of scheduling and communication, my friends and I managed to keep our anime club alive. All this despite watching remotely, coordinating through Google Hangouts while finding workarounds for faulty internet connections and temperamental audio. With 12 episodes of Mob Psycho 100 down, we’re looking toward the future. But this experience, fun as it was, has me thinking about how I watch anime today. When did I forget how fun it was to watch anime in a group? 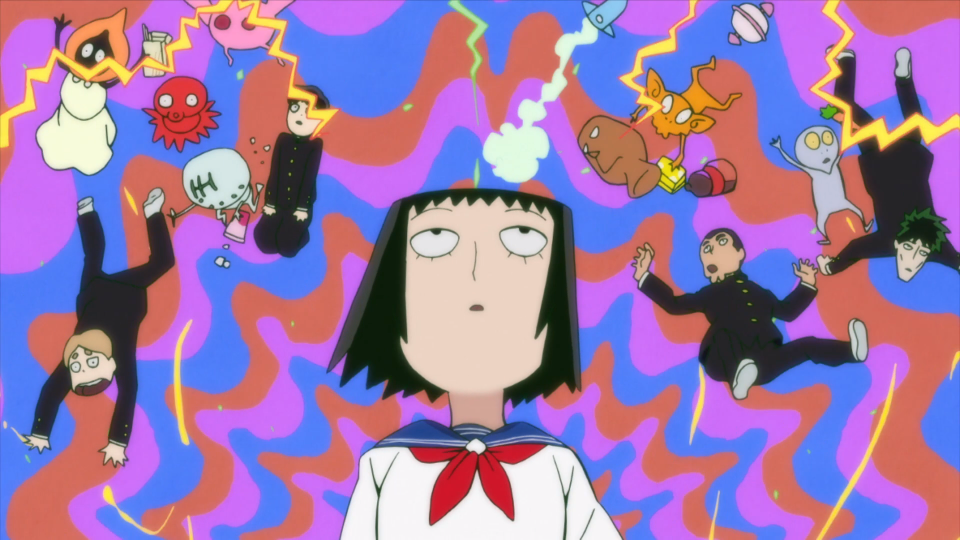 The way I’ve watched anime has changed over the years. In middle school, I caught episodes on TV channels like Aniplex and Toonami. In high school, I navigated carefully between episodes of Naruto divided into thirds on YouTube, their opening and ending animations excised. Now it’s easy: go to a video service like Crunchyroll or Funimation, click on an episode, and (if you pay a small fee each month) watch without ads. No more having to spend money on DVDs or videotapes or having to miss out because the show wasn't available in your region.

For me watching anime has become a ritual, a solitary pursuit. Park in front of the computer. Find the most recent episode of a new series. Endure 24 minutes in silence. Post a hot take on Twitter, maybe a screenshot or two, repeat. It’s not the way most people watch television. There are plenty of folks out there who’d rather cook or exercise while half-paying attention to something like The Floor is Lava, which is absolutely valid. But I’d reckon there are now thousands of folks out there hooked on their niche entertainment, watching episodes of a series only they know about on a format that caters exclusively to them. 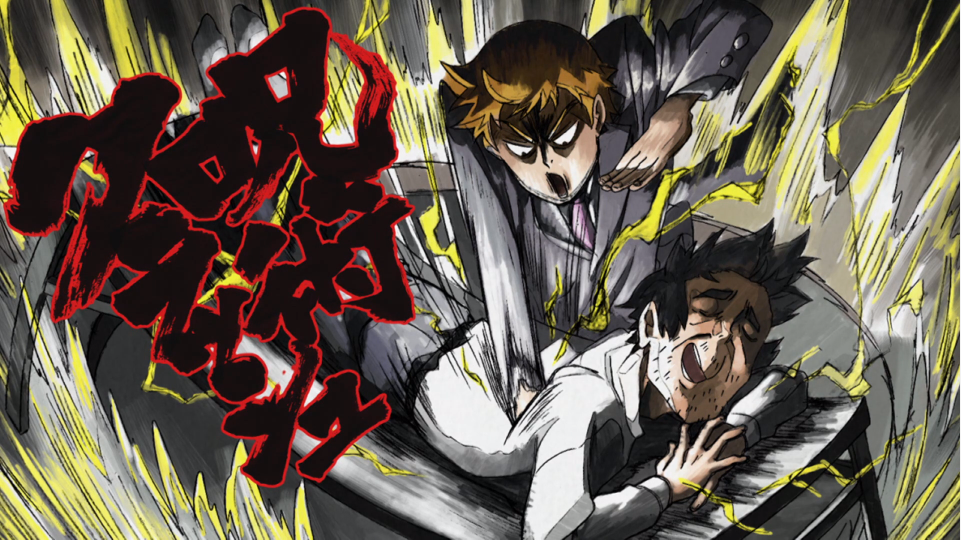 Watching Mob Psycho 100 with friends reminded me of a few things. The first is that group watching is a great way to see old favorites through new eyes. I’d already seen and loved the first season, returning to scenes on occasion as the mood struck me. Very little in the show now comes as a surprise. But being able to see and listen to my friends react to it, even remotely, reminded me of what it was like to see it for the first time. In the first episode, when a character whose chin looks exactly like a butt walks past, a friend of mine yelled “this show rules!” In the fifth episode, when Mob weakly punches an incensed Teruki, another friend told me that despite the good amount of anime he’d seen, he’d never seen a punch like that. A punch that spoke of weakness instead of strength.

Group watching is also a great opportunity to remind yourself of the sheer amount of craft that goes into a series. The frequent use of paint by glass animation, a difficult and time-consuming technique that is used for key scenes. Great moments of character animation. Funny music cues. Being reminded that what makes Mob Psycho great isn’t the fights (though they are very good) but instead the attention paid to Mob’s growth and how he interacts with the rest of the cast. Mob Psycho 100 is not a particularly complex series, and there are no mysteries to tease out in the same way as, say, rewatching Evangelion can be surprising. But I came out of this watch-through with an even stronger appreciation for it than I had before, while acknowledging some weaknesses I’d missed the first time. 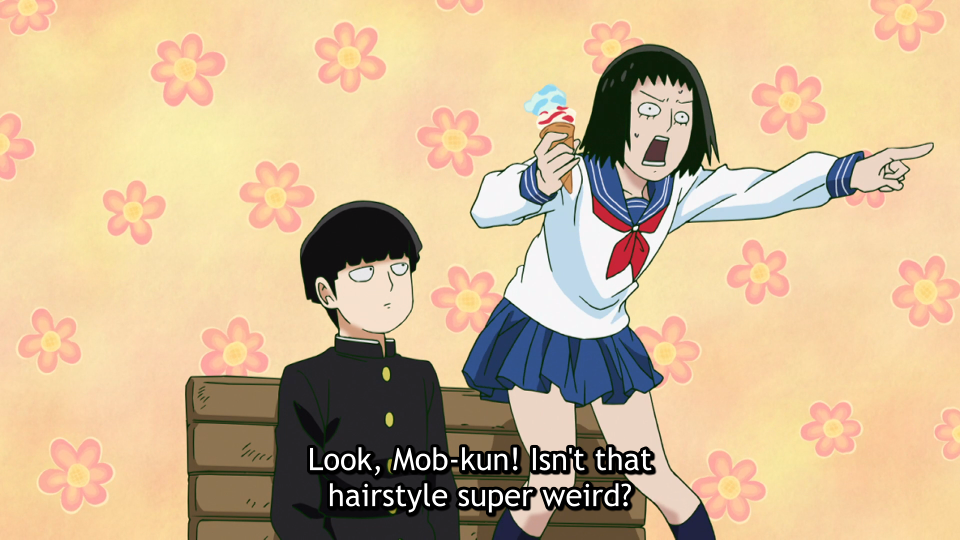 Years ago, I used to watch anime with friends more frequently. A blogging friend and I marathoned through Honey and Clover in college, another series that stands out to me as being heavily informed by the life experiences you bring to it. Before that, we had the honor of rewatching Penguindrum with friends, including one of the original writers on the Altair and Vega blog back in the day, which obsessively broke down episodes of the series each week it aired. Penguindrum has far more moving parts than Mob Psycho 100, and rewatching it involved talking through what bits we’d missed the first time, what bits had aged well — and, of course, where the series dropped the ball completely. But getting through to the end reaffirmed to me what Penguindrum had always meant. Years later, I consider myself extraordinarily lucky to have had that experience.

In this Age of COVID, many of my friends are scared and alone. It’d be easy, if you have the luxury, to hole up in a corner with your favorite series and take comfort on your own. There are times when this is needed. But if you’re able, I’d recommend doing what I did and watch some anime with friends. You can use an app like Netflix Party, or you can do it like we did, the old-fashioned way, synching up your Crunchyroll players and hitting the Play button at the same time. In the process, maybe you’ll find a new favorite, or discover something new about a show you loved. Maybe you’ll learn something new about your friends. 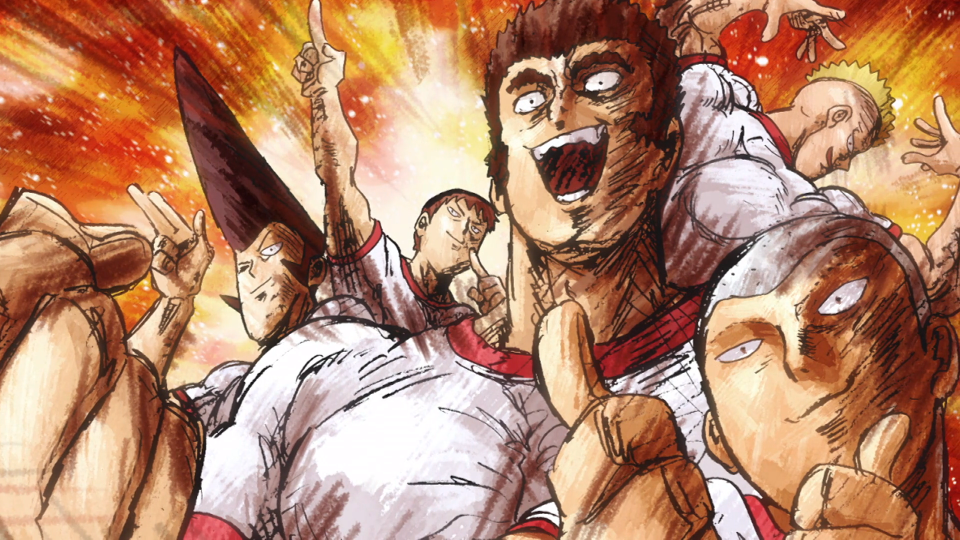 As for me, once I round up my coworkers again, I’m set on introducing them to Kyousogiga. A series I never fully appreciated the first time, but want to give a second chance, with friends. Join me, will you?

What are your experiences watching anime with friends? Were you around for the era before streaming? Never heard of Kyousogiga? Let us know in the comments, and go watch Kyousogiga right now!

Adam W is a Features Writer at Crunchyroll. When not corralling people into an online chat box to watch anime, he sporadically contributes with a different loose coalition of friends on a blog called Isn't it Electrifying? You can follow him on Twitter at: @wendeego