RECAP: Who Can You Trust in Re:ZERO Episode 5 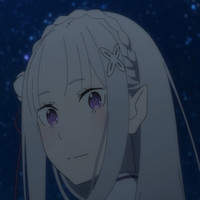 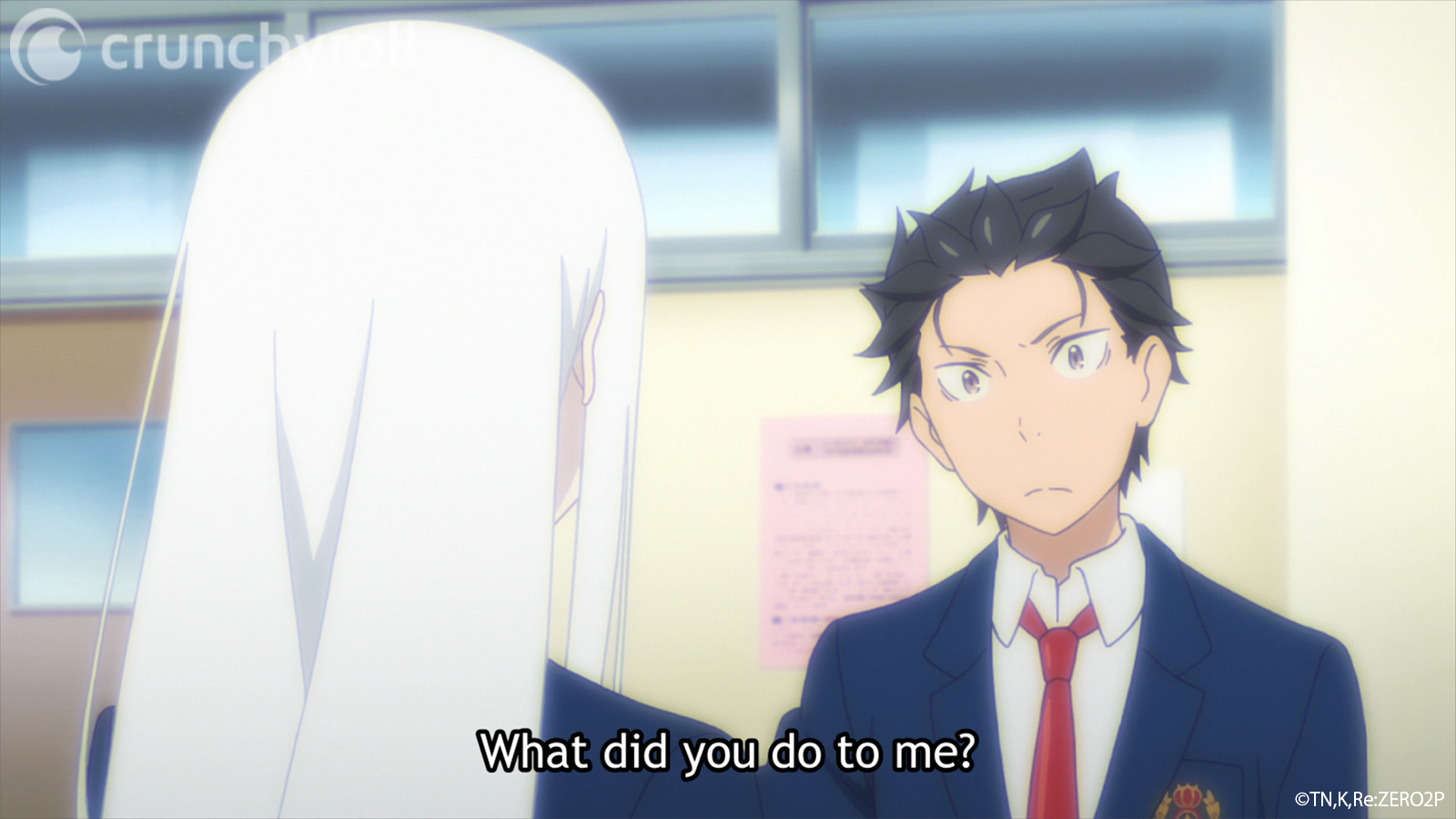 **SPOILERS FOR RE:ZERO -STARTING LIFE IN ANOTHER WORLD- SEASON 2, EPISODE 5 AHEAD**

To get the ball rolling, Episode 5 finally grants us Season 2's opening. It delivers the glitchy and stylized feeling that Re:ZERO -Starting Life in Another World-'s openings have always brought. Jampacked full of intensity, this opening is a must-watch.

From there, begins Subaru's encounter with Echidna in the classroom (where we had left off). Echidna reveals the emotional rollercoaster Subaru had just experienced with his parents was one of the trials that had to be endured for the Sanctuary to be freed. It was a fabricated world created by Echidna to force growth upon Subaru, or so it seemed. 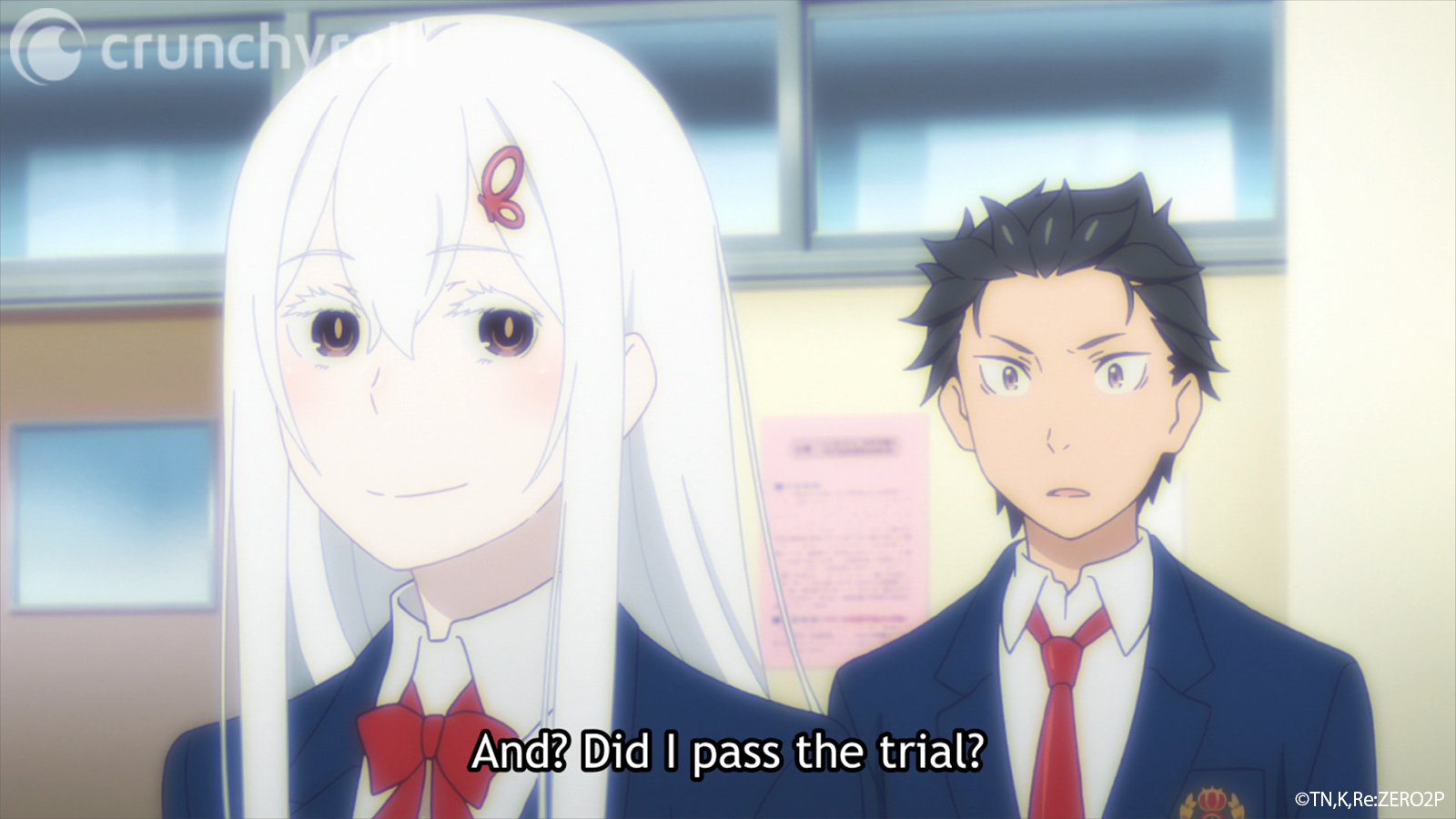 Subaru senses good intent from Echidna and graciously thanks her. He vows to make her wish come true in a very protagonist-like fashion.

After that sequence, Subaru awakens in the ruins where he initially followed Emilia. She's wide-eyed, sweating, and panicking — it's clear that her experience with the trial didn't go as smoothly as Subaru's, although it's a mystery why that is. 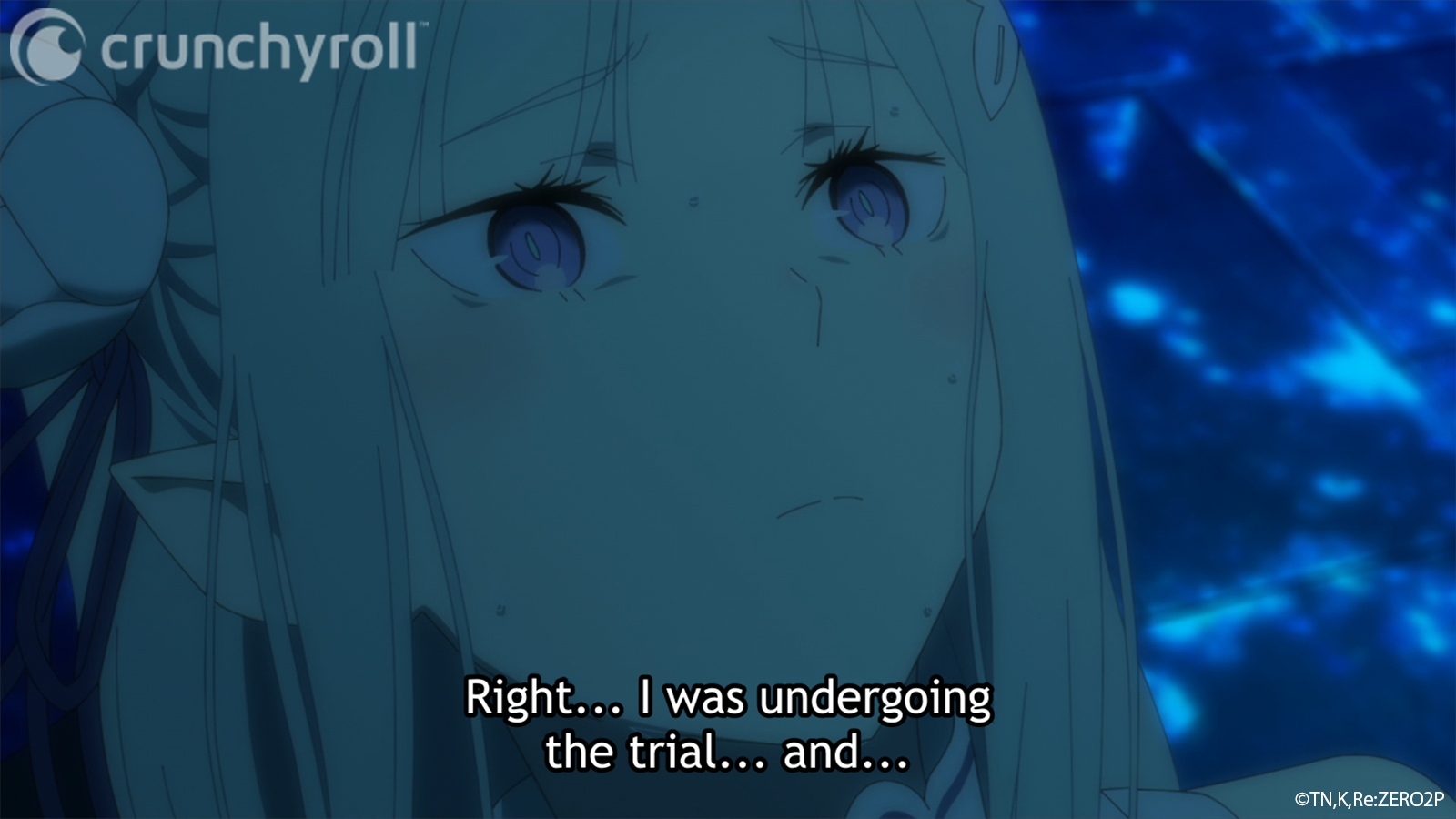 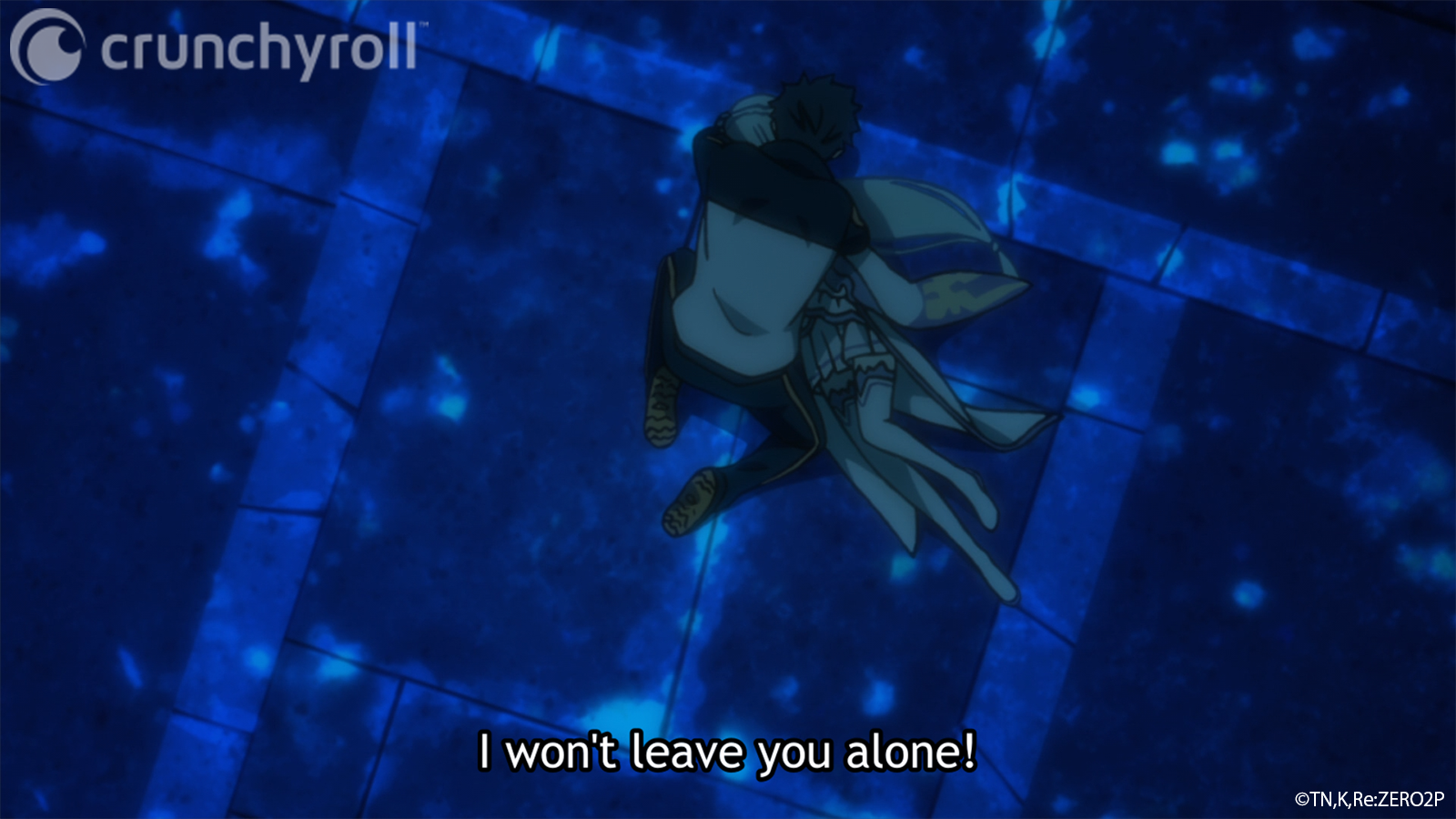 Eventually, she's calmed down and we're taken to a room in the house that's shared by the rest of the party. Emilia is unconscious in her bed and recovering, while the gang is discussing alternative solutions. 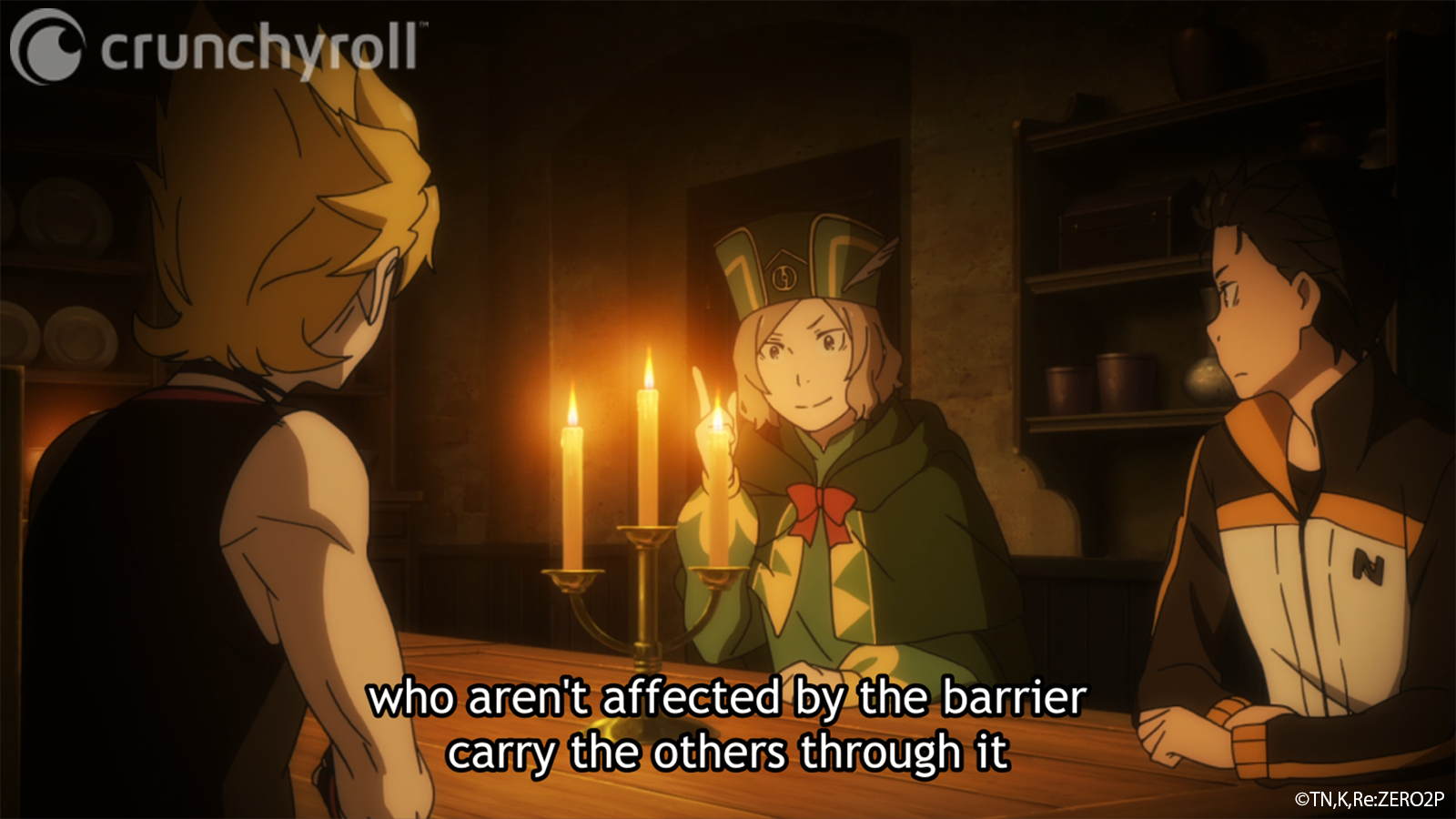 When they finally land on an idea that might work, we're introduced to a new character who barges in and violently explains why it won't — Ryuzu Bilma. 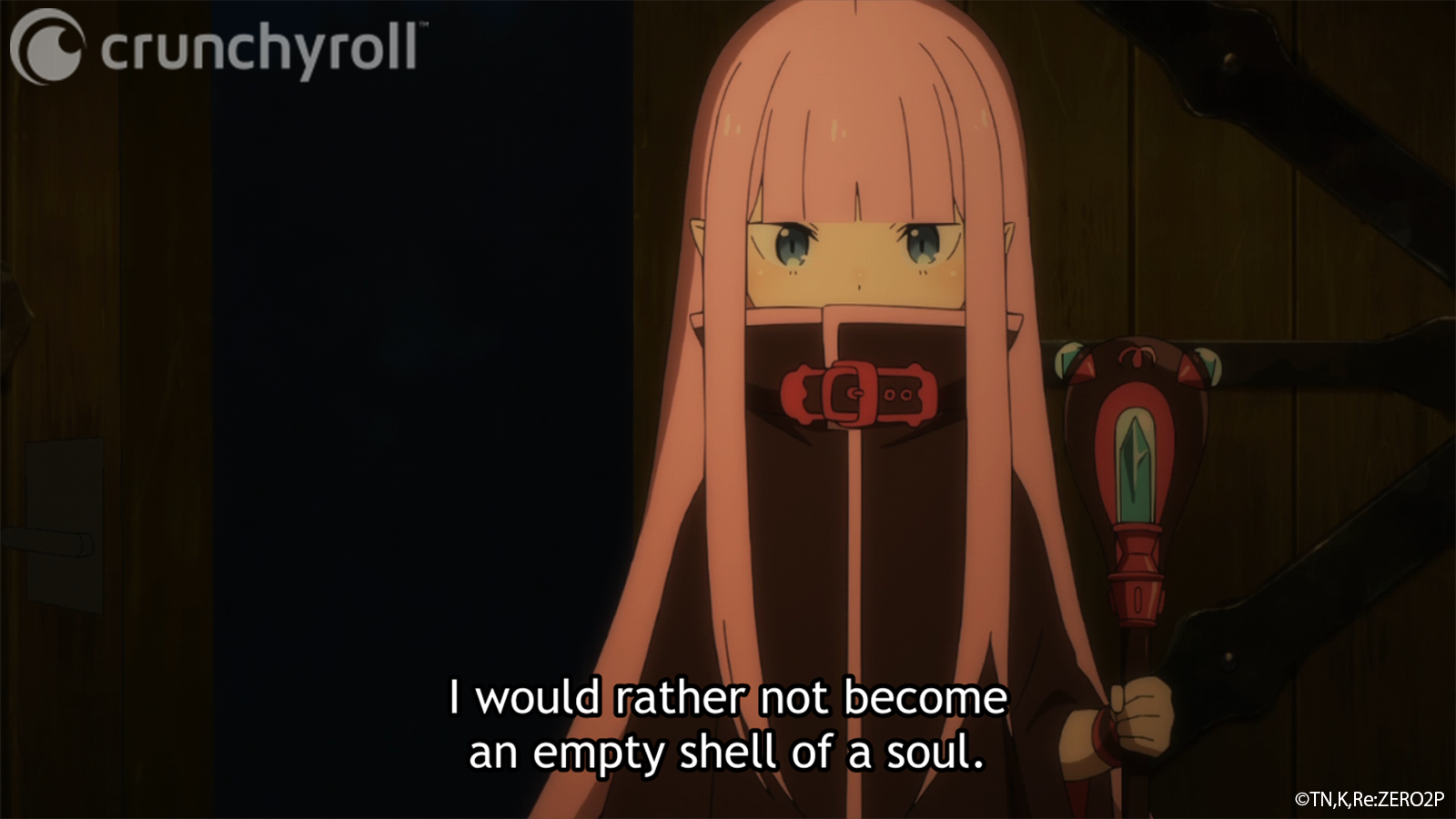 This familiar face to Subaru is a spirit who "represents the community" they're in. She likely led Subaru to the Sanctuary because she saw promise in him. The idea they pitched simply just won't work because souls are stripped from those whose body's exit the barrier. So it's back to the drawing board.

From there, we see Subaru sitting by Emilia's bedside until she regains consciousness. She's aware that she lost her composure back at the ruins, and while it still goes unsaid as to why, her infatuation with Subaru is certainly growing. 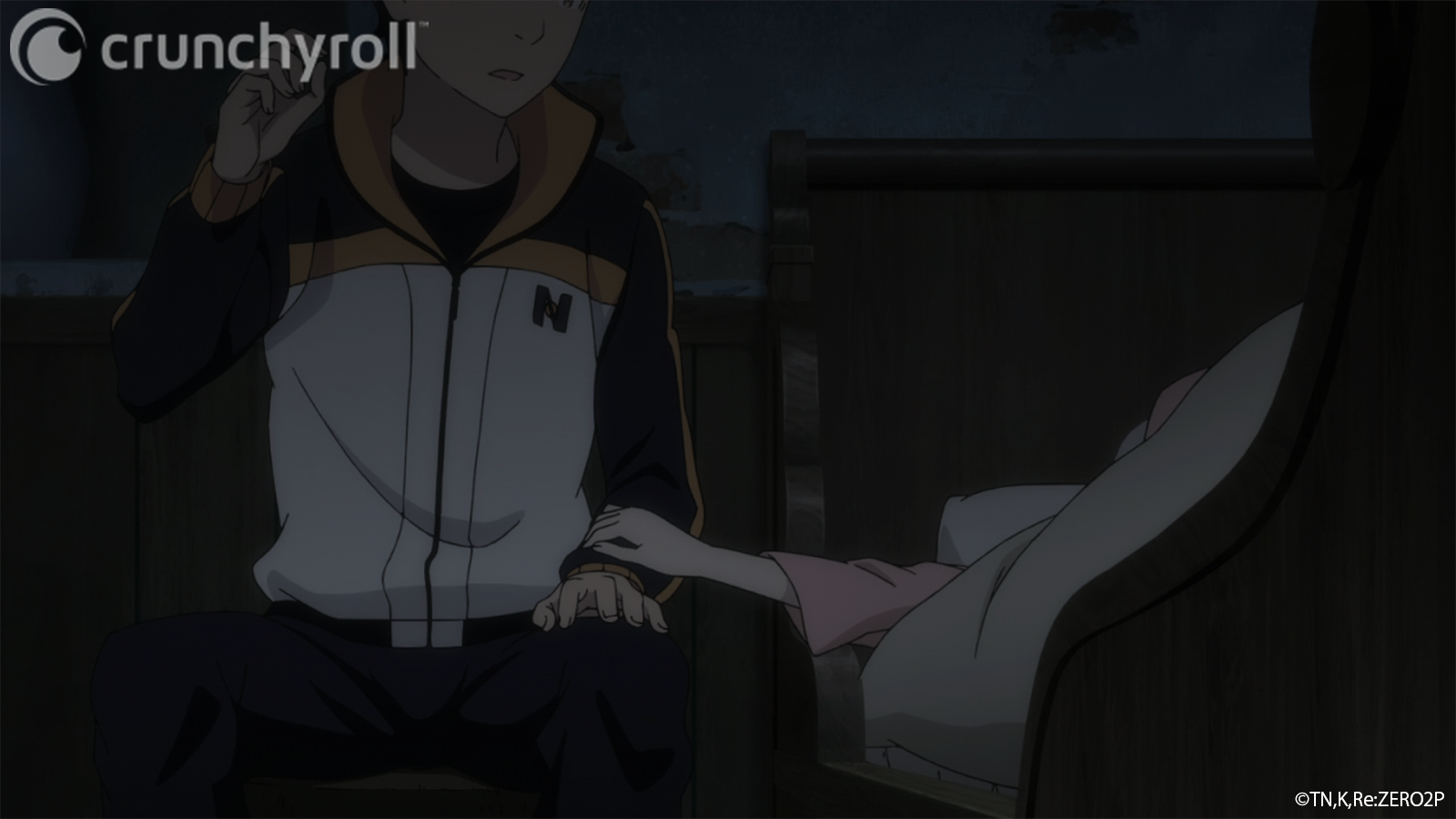 Moments are shared, and Emilia decides that she'd like to try again that next night.

We then see Ram listening from behind the door. She later talks to Subaru about how some of the half-bloods have conflicting ideals regarding the Sanctuary. Some actually prefer to stay because it's isolated from danger, while others desire freedom. Ram really just wants Subaru to be careful with who he trusts, she worries about Emilia being harmed because of her pivotal role as the key to liberating the Sanctuary. 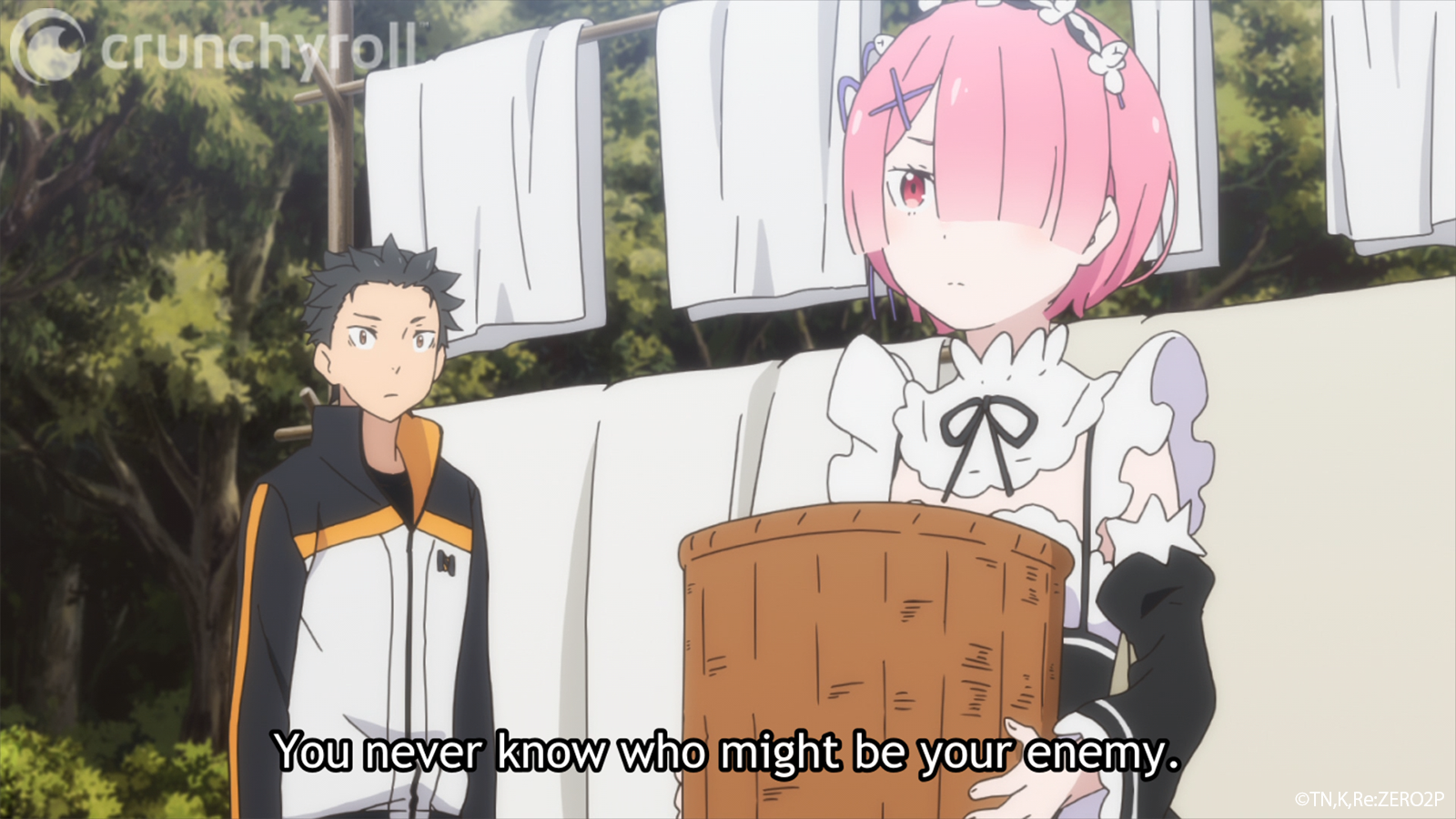 Fast forward to nighttime, when Emilia tries again. She's met with the same panic as before and another retreat is in order. Though while the group is waiting for her, we do find out that Garfiel and Frederica aren't actually on good terms. Turns out she's quite suspicious, this intrigues Subaru. 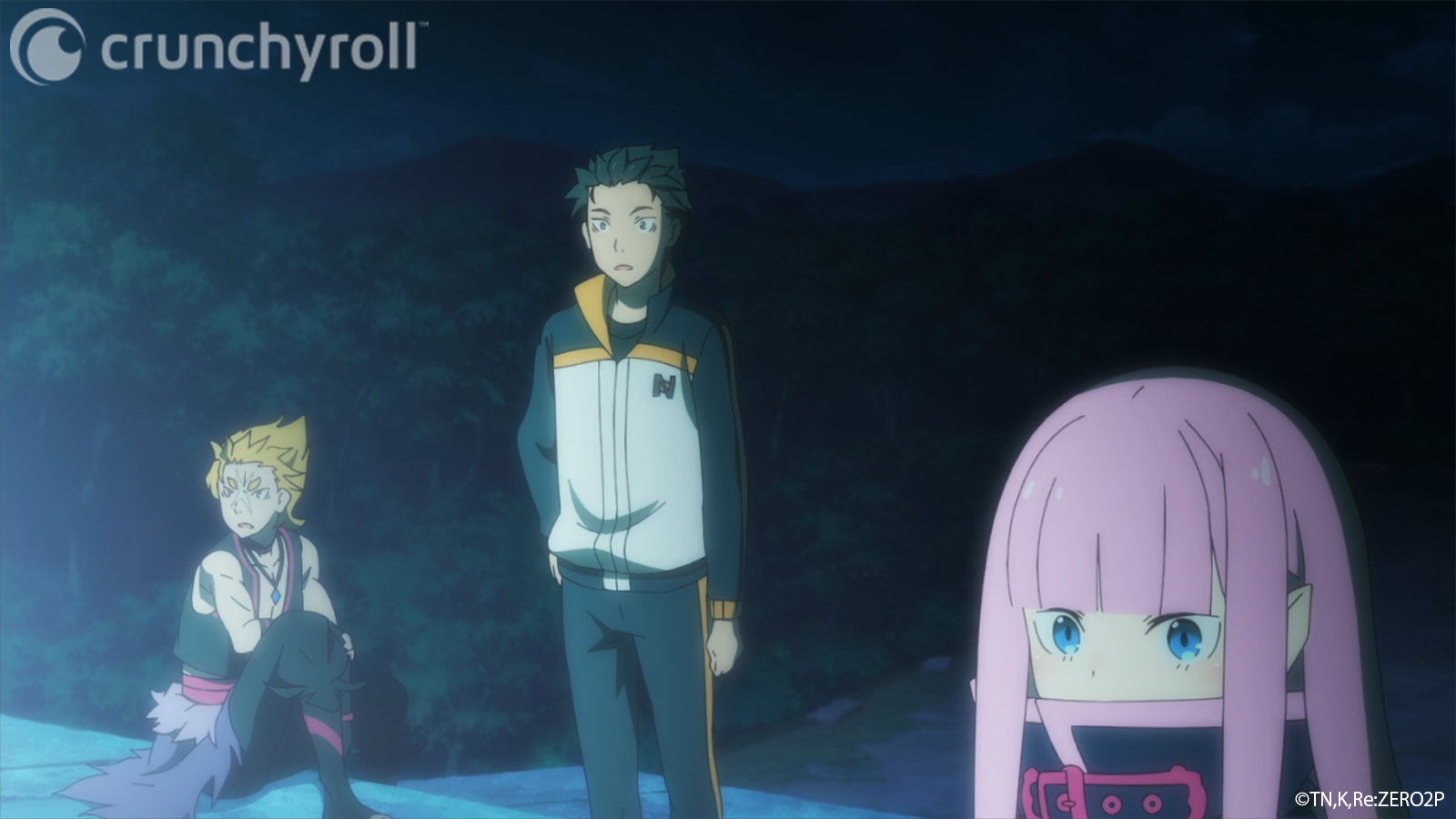 Once they regroup and go home, Subaru is summoned to Roswaal's room where the most climactic scene of the episode takes place. It starts by Roswaal demanding that the conversation remains private, then it slowly evolves into him explaining that he's known of the Witch's Cult the entire time. He could've interfered but didn't and many died because of it. If you know Subaru, you'd know this angers him greatly. 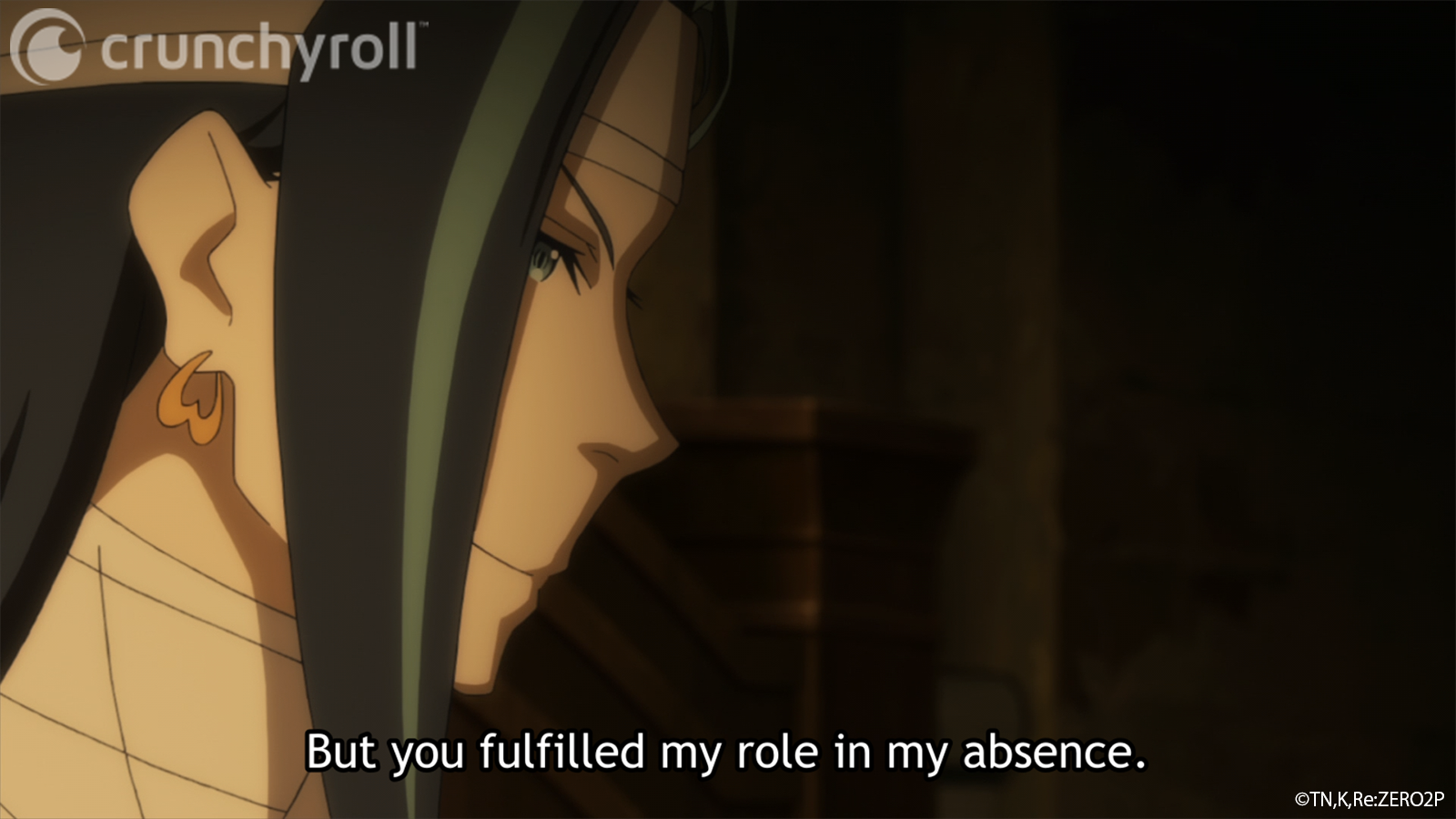 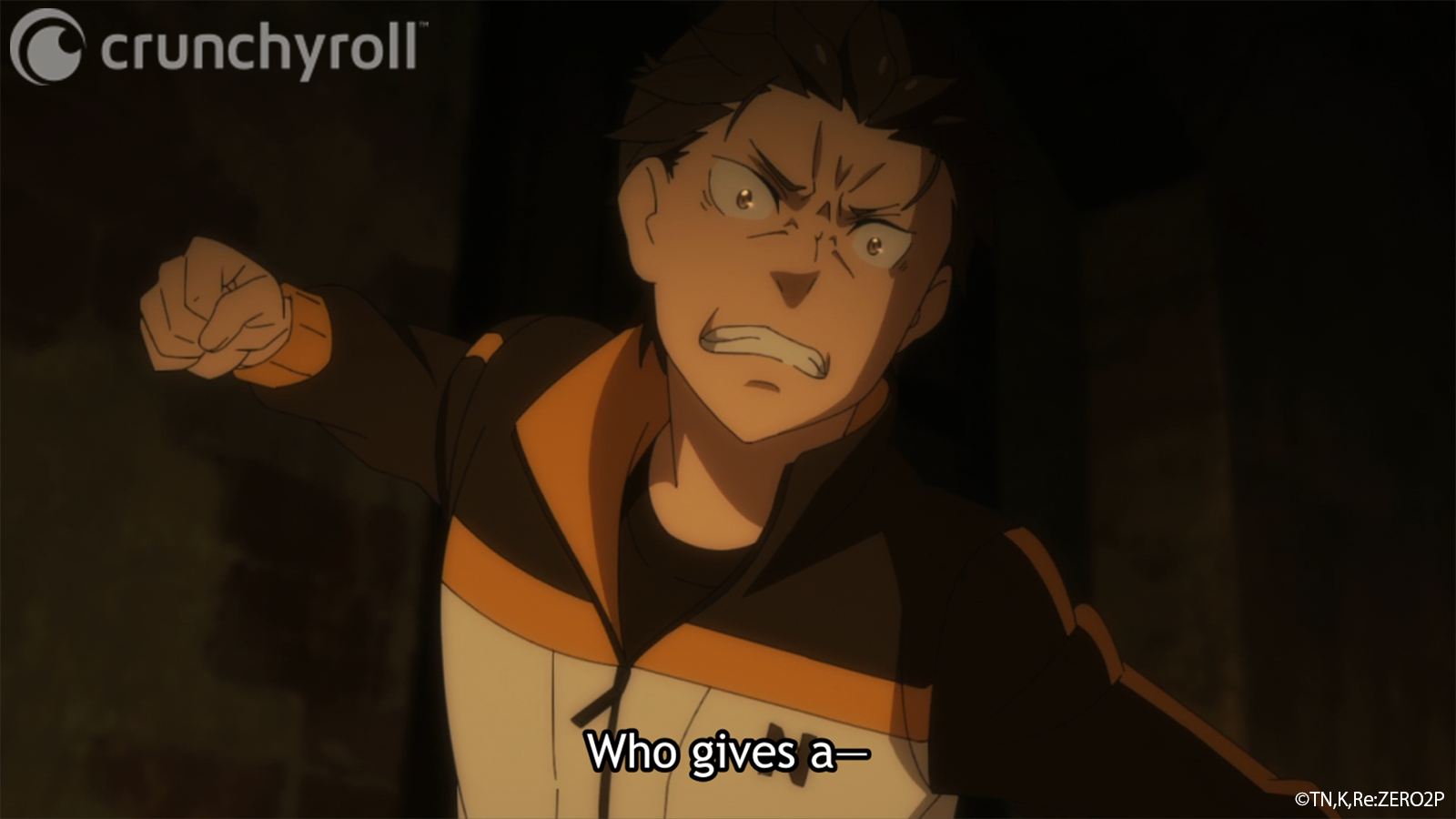 Roswaal deflects blame by telling Subaru he didn't interfere because he believed that Subaru could protect Emilia, since his resolve was so strong. Roswaal follows this up with an attempt to make amends with a lacking apology.

This is another suspicious exchange where Roswaal alludes to knowing more about Subaru than we're lead to think.

The episode slowly starts to see an ending point when Subaru has another wholesome conversation with Emilia about how she has what it takes to overcome the trial. This conversation is had because Subaru plans on leaving the Sanctuary and the fate of the people in Emilia's hands. 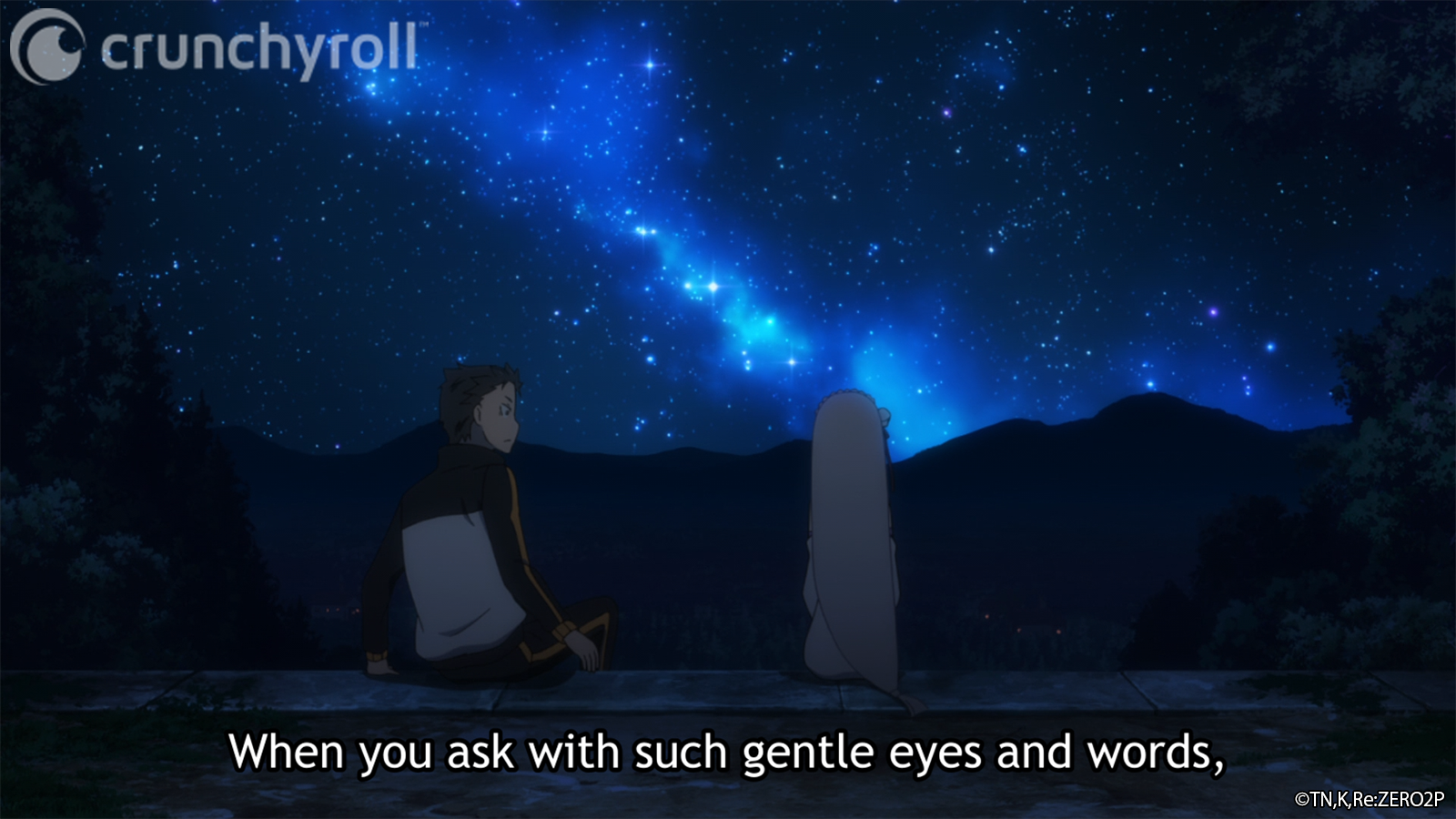 Lastly, Ram assures Subaru that Frederica is of good heart, and we move forward to the mansion. Subaru's first destination on this new sub-journey.

He enters the seemingly forsaken mansion, and when things seem off, Subaru frantically runs for Rem's room, Worried. The episode ends with Subaru impaled and bloodied by an old adversary. 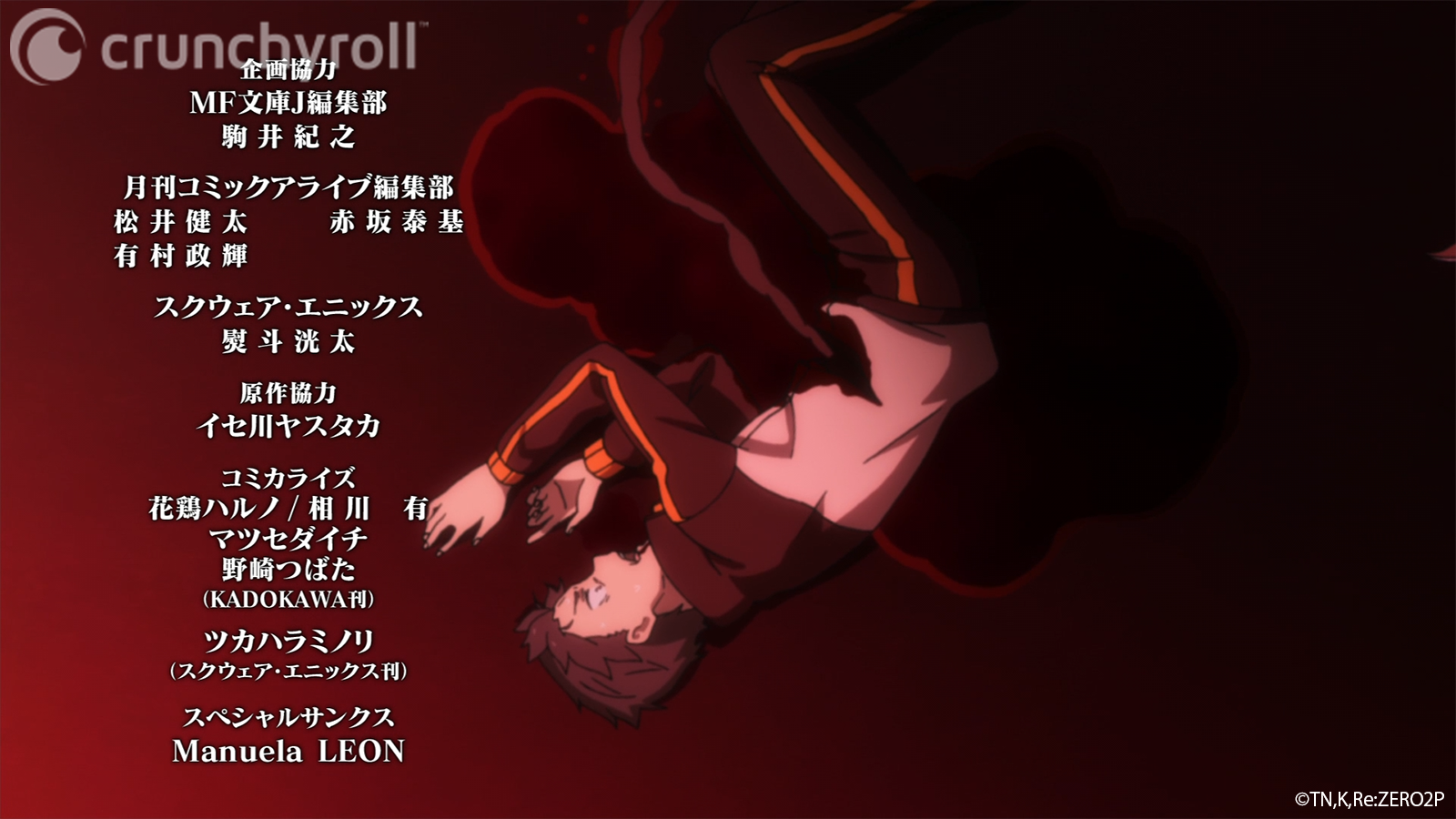 Right as we were starting to think Subaru will endure less death this season ...

Does Roswaal know about Subaru's "Return by Death?" How far back will his most recent death take him? Let me know what you think in the comments!