FEATURE: Gon vs Neferpitou and the Art of the Anime Beatdown 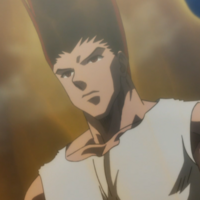 Hunter X Hunter, like all of the best anime that deal with different forms of combat, found unique ways to create poignancy through battle. It isn't just spiky-haired people punching villains, but reflections on what it means to believe in yourself. What it means to push your limits and fight for something you believe in. What it means to crave strength in all forms. And, sometimes, what it means to abuse said strength. The fights we've looked at so far on Fight Scene Friday have tended to be fairly lengthy, or at least involve intense amounts of back and forth action. Hard to teach a lesson about never giving up when the other dude isn't really punching back.

But this week, y'all picked Gon vs Neferpitou. And it's ... not that kind of fight.

It's not a bad fight. It's almost scientifically impossible for Hunter X Hunter to do those. Instead, it's a little bit of build-up, followed by a little bit of suspense, followed by what can, at its most gentle, be described as Gon curb-stomping his opponent. In the end, Neferpitou — ever loyal and glad to die in the stead of the King — is a bloody lump against a tree. And Gon is a downright terrifying figure — a far cry from the 3-foot-tall boy with the fishing pole we met in the first episode.

So what makes this kind of fight worth it? Why not extend it a little bit, creating a more equal match and giving Neferpitou a time to shine against Gon and Gon's new quad muscles. Well, in this case, the story doesn't need that. It needs something a little more ... threatening. Something that will make us reconsider Gon and his "sweet summer child" status. 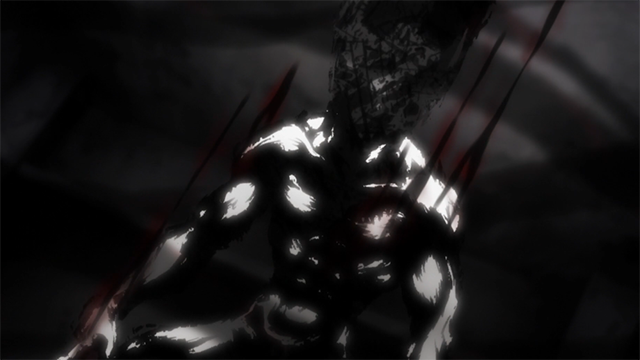 "Beatdown" fights are usually very, very emotionally motivated. In this case, Gon has just learned that Kite, a former student of his father and eventual ally, is really, super dead. This angers Gon, and while Neferpitou is out to kill Gon for the King, Gon's inspiration for the upcoming duel is much, much more passionate. He says that if this is the end, he'll "use everything," and as he transforms, his aura threatens to tear the room apart. And while seeing Gon as this jacked giant is a curious and uncanny sight, it's also a menacing one.

Because these beatdown fights hit at something that usually goes unannounced most of the time in shonen series — that the heroes, if angry, would be downright terrifying. When you combine their fighting skills, their tenacity, and their mountain-sized muscles, they're not people you'd want to be on the bad side of. But these fights present them in a new light. 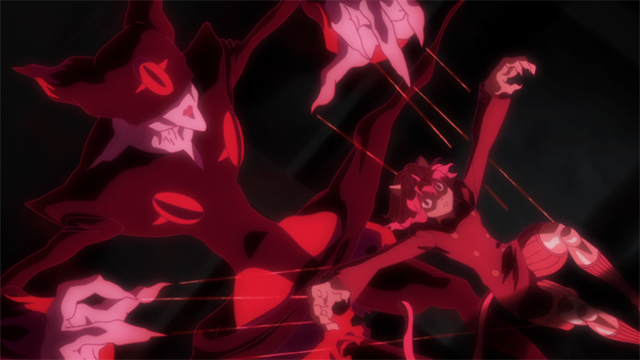 It reminds me of the end of the classic DC Comic Kingdom Come when Superman, fearing that most of his allies and peers have been killed, threatens to crush the U.N. Building. For a few panels, the human characters exhibit pure fear, cowering and attempting to flee from their former savior. A far cry from the usual "Thank god you're here, Superman" reaction. When flipped over, power — no matter how previously noble — is terrifying.

And while Neferpitou is definitely an antagonist at points in the Chimera Ant arc — and though they show little hesitation when it comes to attacking Gon in his new form — we fear for them. Not only is there an obvious size difference, but the jarring shift makes us unsure of what Gon is going to do next. When we can't rely on our hero for emotional and physical consistency, it's hard to have a handle on anything. And so, to a certain degree, we're put in Neferpitou's shoes — enthralled, excited, a little worried, and not quite confident about what's gonna happen next. 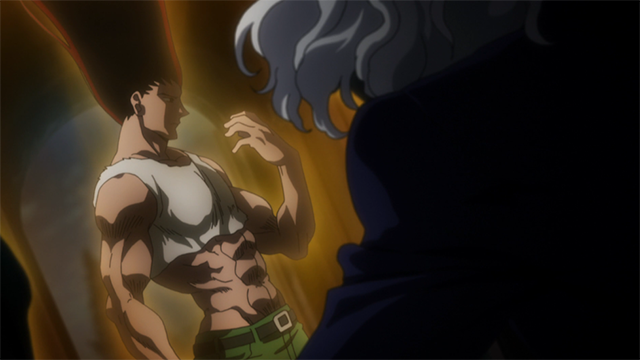 Fights like these need to happen every once in a while to shake up how we feel about protagonists and antagonists in the long term. It takes whatever formulas we expect and rockets them out the window, shaking us from any complacency and forcing us to pay attention. Hantā Hantā does this quite a bit, a trend that makes it one of the greatest battle anime of all time.