FEATURE: How Anime Coffee Makes Us Feel So Cozy

Ever look at a good cup of anime coffee and feeling like you're missing out? Me too 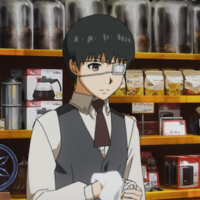 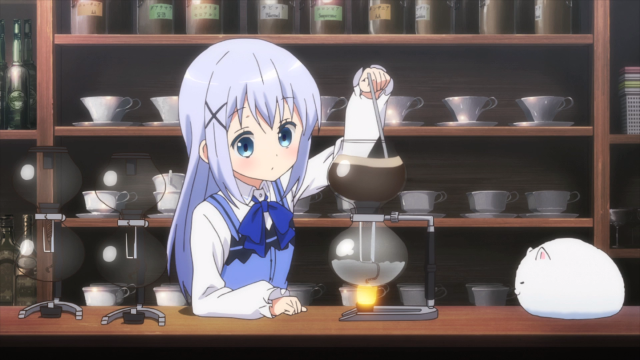 Is the Order a Rabbit?

Sometimes all you need after a long hard day is a cup of coffee. But maybe coffee alone isn’t enough for you. No, sometimes you need that added touch of sophistication — something special, something cozy. Something especially cozy. On this year’s international coffee day, let’s reflect on a handful of anime series that take their coffee especially serious. And dare we might even say, care enough about it to put a luxurious coffee break above all else. It's the little things.

Fans of Sui Ishida’s Tokyo Ghoul are no strangers to the magnificent power of coffee. For such a simple drink, it packs a powerful punch for protagonist Ken Kaneki. In this world, violent supernatural entities called “ghouls” have an insatiable hunger for human flesh. Once you become a ghoul, you are no longer able to consume normal food without becoming nauseous and ill. After becoming a half-ghoul after being attacked and undergoing an organ transplant from the assailing ghoul, Kaneki’s world is turned upside down. If he can’t sit down for a meal with friends anymore, then what are the chances of ever returning to the status quo? 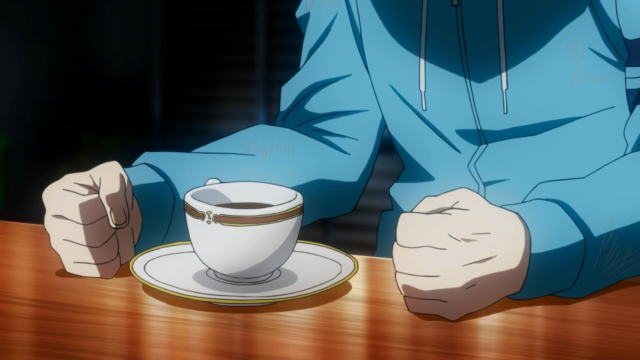 Well, there’s one human thing Kaneki can still consume: coffee. Not just regular coffee though — the specially brewed coffee of Anteiku, a coffee shop front for a secret organization of ghouls living among men. Anteiku’s homebrew isn’t just suited for ghoul taste buds but serves a psychological purpose, as well. After a dietary nervous breakdown, Kaneki simply isn’t able to come to terms with his new reality. Food is social, and as Kaneki quickly learns, ghouls must learn to cope with everyday social interactions where it’s involved to fit in. For as “bitter” as coffee might seem to everyone else, it is especially sweet to Kaneki if just for the sake of clinging to his last remnant of normalcy. 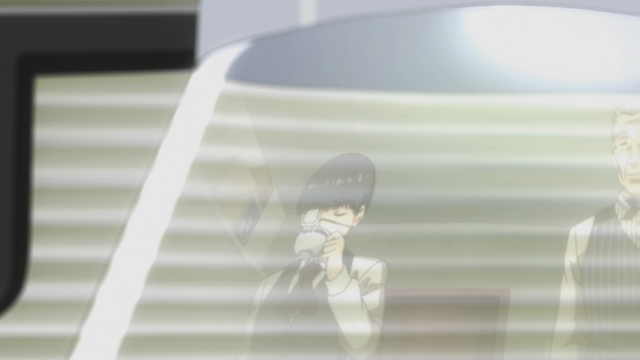 Of course, it isn’t all about drinking coffee either. The sophisticated and cozy vibe of Anteiku, meticulously managed by important side characters, serves as a background to the gruesome violence of their double-lives. Coffee isn’t merely for Anteiku’s true purpose as a ghoul hotspot. It’s a much-needed buffer from the chaos and fast-paced action of supernatural battles all tied-up in Tokyo Ghoul’s dark, and often disturbing themes. If we (and Kaneki) end up associating coffee with any sort of comfort, it’s in stark contrast to the harrowing realities of life abruptly changing all too fast.

Coziness as an Art Form 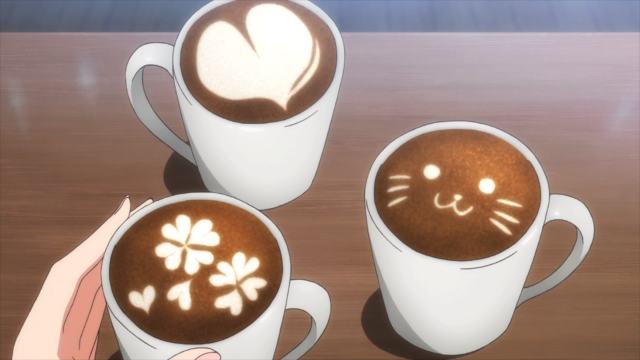 Latte art from Is the Order a Rabbit?

Is the Order a Rabbit follows high school student Cocoa Hoto studying abroad, who has been assigned to live and work at a coffee shop called "Rabbit House." To her dismay, Rabbit House isn't a cute gimmick cafe with bunnies everywhere, but rather a fully functional coffeehouse with ... an eccentric waitstaff. Unassuming Cocoa quickly learns the ropes and soon enough she's practicing latte art with the owner's granddaughter Chino and firearm aficionado Lize. At first, it seems like Rabbit House's coffee is serious business. Compared to Chino and Lize's near-encyclopedic knowledge of coffee beans, Cocoa fails to recognize a single blend after being tested. So, how in the world can a coffeehouse hopeful prove herself? 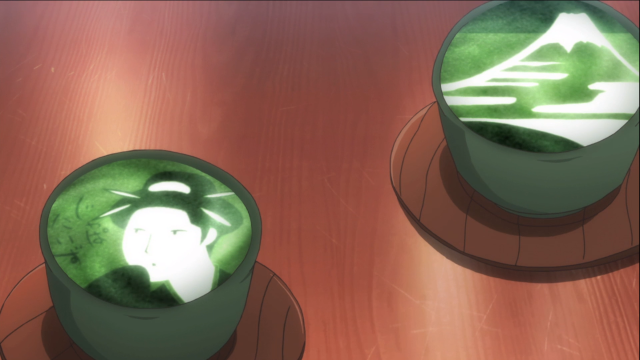 Chiya's Ukiyo-e latte art from Is the Order a Rabbit?

Rabbit House isn't cozy by default due to it's a slice-of-life status. Here, coffee is a social activity, not a snobby status quo symbol. On her first day, Cocoa is thinking outside the box and the three girls make latte art depicting their interests — army tanks, cute fluffballs, and naturally, a Pablo Picasso imitation. Who knew latteral thinking could make such a good impression? In another episode, the girls visit former-competitor Ama Usa An, where Hokusai-inspired Ukiyo-e latte art is used as a punchline. There's no real purpose to latte art other than improving to the atmosphere. So, is coziness for coziness' sake okay? Absolutely. Because you don't need to be a snob to enjoy coffee's charm.

Unlike the intensity of series like Tokyo Ghoul, the girls of Rabbit House and friends don't have many reasons to be super stressed. Although it may seem like the cutesy cafe and coffee are setpieces, together they serve the vital purpose of bringing different people together. You don't need to take a break from saving the world or fighting monsters to warrant a chill coffee break. Sometimes, all you really need is a way to get to know friends and savor the finer niceties of life.

The No Chill Zone 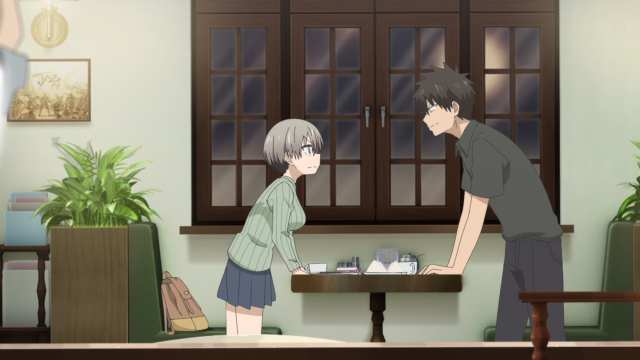 "There was a fish in the percolator?!" (Souce: Funimation)

The recently aired slice of life series Uzaki-Chan Wants to Hang Out! has drawn attention for plenty of reasons, albeit probably not for its take on the supposedly chill vibes of a cafe. College student Shinichi Sakurai is persistently hounded by his underclassman Hana Uzaki, who really, really, really wants to hang out. Whenever he’s on campus, there’s no doubt Uzaki is just around the corner. There’s only one place Sakurai has as a sanctuary — a quaint and fancy coffee shop. Like Tokyo Ghoul’s Kaneki, Sakurai takes up a part-time job there serving the dual purpose as an outlet for life’s daily stresses. Except ... one day Uzaki finds out where he works and it all goes to hell. 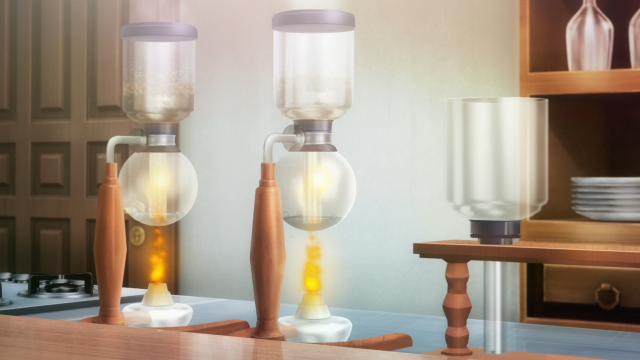 The thing about coffee is that someone has to make it. Maybe even serve it to you. Sakurai asks Uzaki to act as a customer, not his friend — which only causes a strange scenario to become even stranger. Unlike the relatively cozy atmosphere of Anteiku, this coffeeshop is a hotbed for situational comedy and gags. Sure, maybe you’ve come across your friends working their side gig before, but to persistently badger them while they’re under the watchful eye of their boss (hilariously nicknamed “The Master” in Uzaki) is a whole new, definitely anti-cozy environment. Like plenty of series reliant on gags, our expectations are inverted for laughs because we’ve simply come to associate them with norms. Coffee is ... normally cozy, right? Of course, it’s all the funnier if your chic coffee shop suddenly becomes a battleground for endless social faux pas. If your main character wants nothing else but to be alone, well, then there’s practically no place better to exploit a trope we all know and love. If coffee is “cozy” then it might just simply be for all the social niceties we attach to it.

The Convenience of Togetherness

Narratively, coffee serves as a great excuse to sit down and do nothing. For example, series like K-ON! and Tower of God couldn’t be any more different save for their cast’s shared love of coffee, tea, and sweets. Similarly, cultures across the world have their own approach to coffee shops and what they represent. In Japan, traditional teahouses called “kissaten” can serve as a more intimate venue to drink coffee with friends and often draw upon their own unique local culture. In other parts of the world, the small, tight-knit culture around “coffeehouses” and salons are still alive and well. Depending on where you live, such places might be incredibly easy to find or might have to be deliberately sought after, hidden behind an innocuous door or hallway. When we see a group of characters huddled over their coffee cups recollecting the events of today’s episode or major plot twist, we can (usually) breathe a sigh of relief. 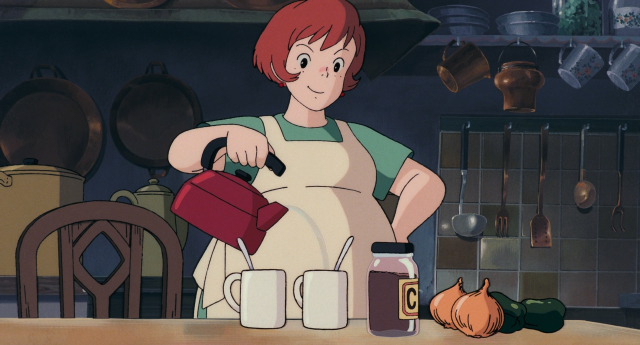 If these places and their coffee need to be cozy, it’s by extension of them being out of harm’s way. And like series such as Tokyo Ghoul have shown us, there’s no better distance between you and danger than a cup of Anteiku coffee. Coffee in anime joins the pantheon of that well-beloved trope of “delicious-looking anime food." But thematically, it’s obviously more than that. In the original Japanese dub of Kiki’s Delivery Service, Kiki is offered a cup of coffee by Osono after first arriving in town. In the first American dub, she’s offered hot chocolate instead, a change that sadly skims over the fact that coffee is often recognized as a “grown-up” drink (or at least, something you wouldn’t normally give young children). With her first cup of coffee, Kiki is symbolically taking the first steps toward her new young adult life — a rite of passage. Not unlike Kaneki taking his first sip of ghoul-proof coffee, this gesture is imbued with powerful emotions and coming change.

So, if you have the time, give yourself the gift of a cup of coffee today. There’s never harm in a little peace of mind. 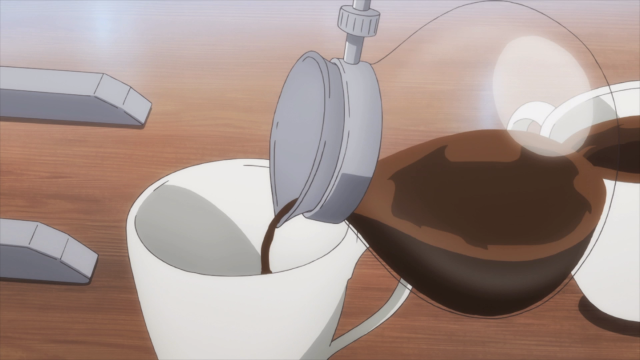 How do you take your coffee? Let us know in the comments!

Blake P. is a weekly columnist for Crunchyroll Features. He prefers his coffee black. His twitter is @_dispossessed. His bylines include Fanbyte, VRV, Unwinnable, and more.

Do you love writing? Do you love anime? If you have an idea for a features story, pitch it to Crunchyroll Features!
Tags
tokyo ghoul, uzaki-chan wants to hang out, kiki's delivery service, is the order a rabbit?, coffee
« Previous Post
Yashahime: Princess Half-Demon - Crunchyroll Fall 2020 Spotlight
Next Post »
Turns Out the Real Treasure Was This One Piece x GUCCI Collaboration All Along
Other Top News
4 Comments
Sort by: