You got your wrestling in my anime! 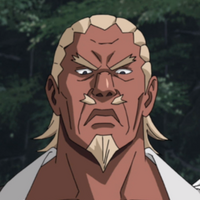 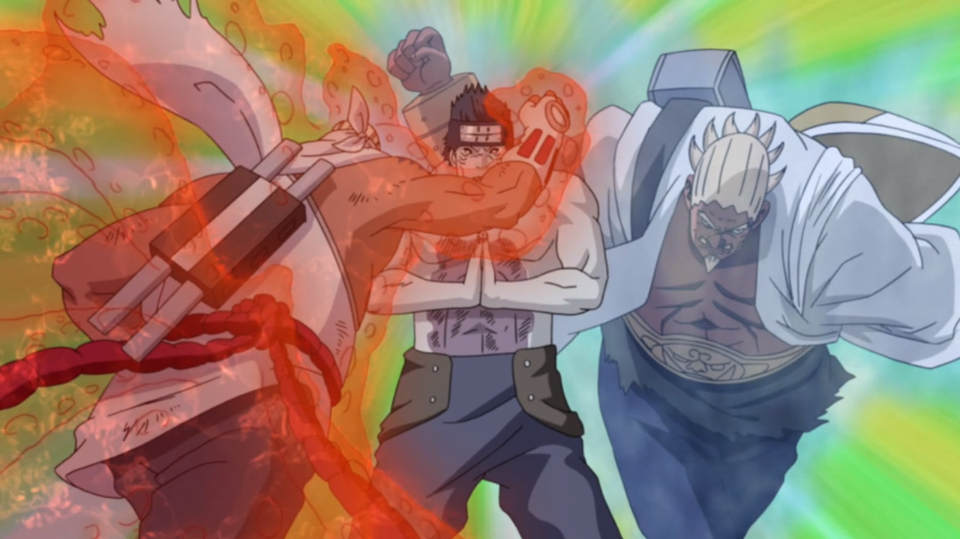 If you watch enough anime, you’ll begin to see that a lot of shows like to reference professional wrestling by having characters utilize various moves on one another. Sometimes, that will make sense within the context of the show, but other times, it might seem a little random. Regardless, it’s always a fun time when an anime decides to add in a touch of pro-wrestling into an episode. Two years ago, I wrote about six wild suplexes that were featured in a variety of anime, so let’s take a look at seven other instances where anime decided it needed a flair of pro-wrestling. 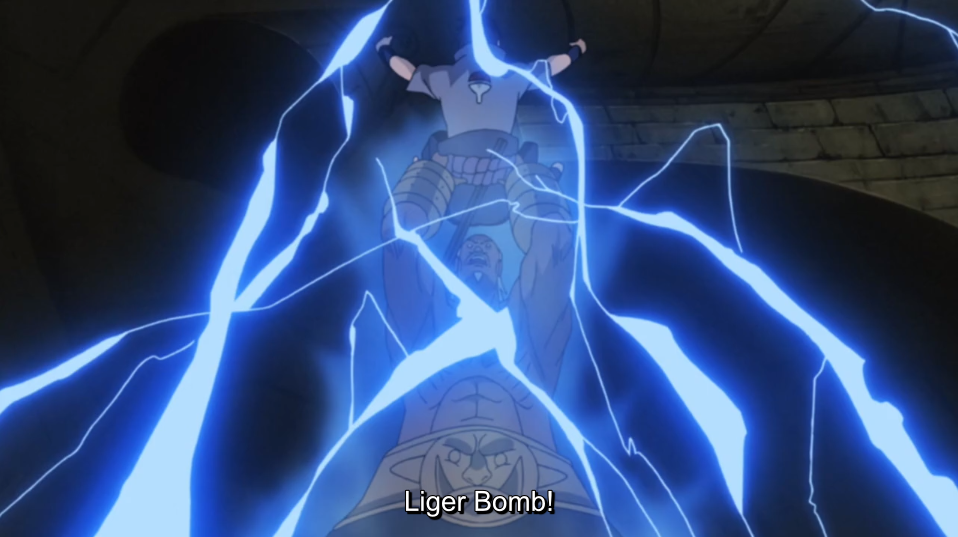 There’s something amazing about the Raikage using pro-wrestling moves as a way to fight against people using wild and ridiculous jutsu. There’s the intense double lariat he does with Bee against the clone of Kisame, and then him pulling out a Liger Bomb against Sasuke. This utilization is somewhat strange because it’s technically not the same Liger Bomb that Jushin Thunder Liger uses in real life (it’s more in line with a Batista Bomb/sit-out powerbomb in terms of powerbomb variations), but also creates a reference within a reference.

Does the Raikage using this maneuver mean that Jushin Liger the wrestler also exists in some form in Naruto or is it Jushin Liger the manga by Go Nagai? Maybe it’s both, similar to how things happened in our reality? Now that’s a non-canon arc I’d be interested in seeing! Either way, the Raikage’s Liger Bomb is incredibly effective since not only does he cover himself in lightning, it’s a move that no one else had survived until Sasuke had to pull out one of his big techniques just to make sure it didn’t kill him.

The God of High School - Stunner 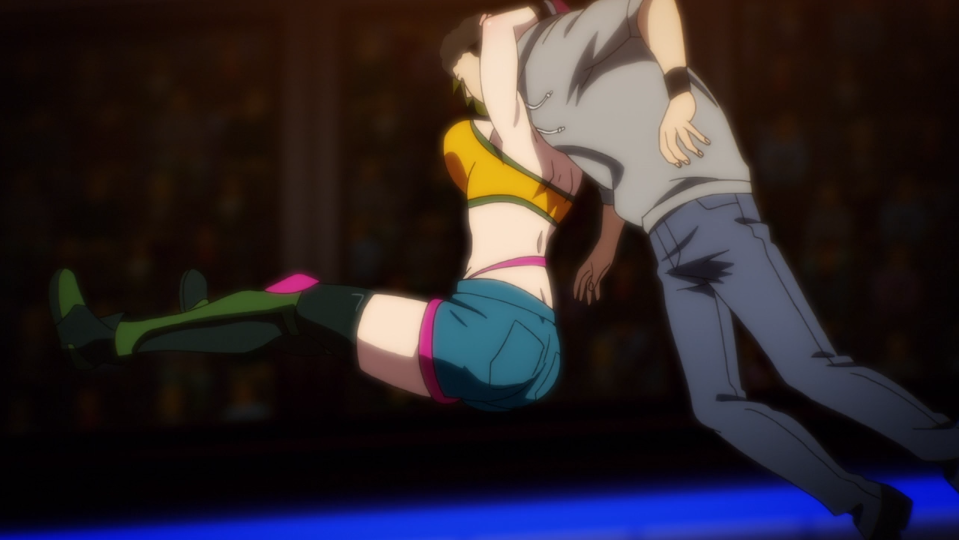 Seeing the most popular move from the US boom period of wrestling being done in an anime is still a wild sight. You know it’s a great move when it’s utilized in the opening as well. Mah Miseon utilizes pro-wrestling as her martial art in the confines of the tournament, which is the best. Perhaps my favorite bit about her character is when she goes up against Yoo Mira and tells Mira that using a weapon on her would be ineffective because she’s used to being hit by those kinds of items thanks to being a pro-wrestler and taking bumps regularly. That’s just brilliant!

Mah Miseon’s version of the stunner is exactly what you’d picture if you ever saw Stone Cold Steve Austin do the move. She sets it up with a kick to the gut and grabs her opponent's head and sits down, jamming their jaw into her shoulder. It was effective enough to help her move onto the preliminaries, but maybe she should’ve pulled it off in her fight with Yoo Mira. Who knows, maybe that could’ve been the path to victory instead of defeat. 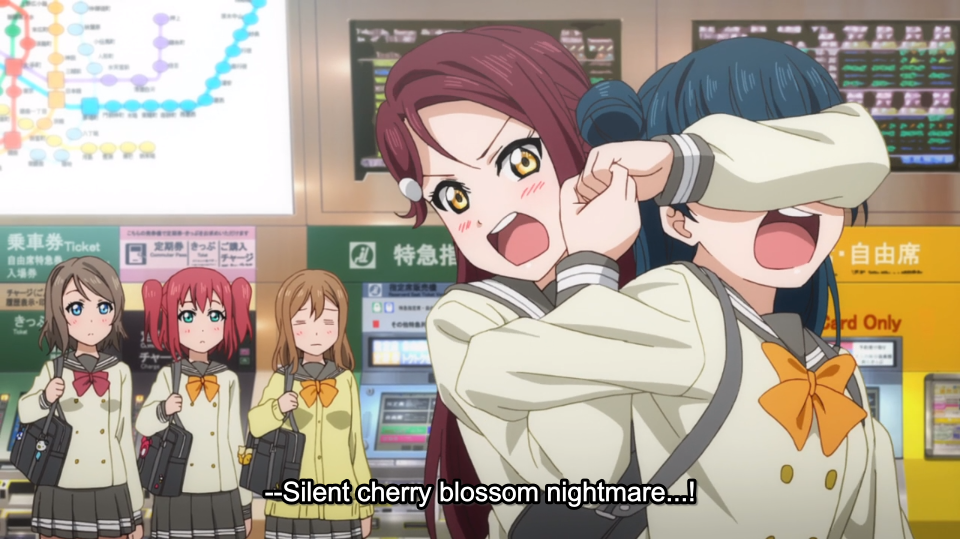 Yoshiko at various points throughout Love Live! Sunshine!! will put other members of Aqours into an abdominal stretch which she’s effectively dubbed “Fallen Dragon Phoenix Hold.” In Season 2, Riko begins an unlikely friendship with Yoshiko, which sees some of Yoshiko’s fallen angel schtick rub off on her. We see this when Riko applies a crossface chicken wing on Yoshiko and calls it, “Silent Cherry Blossom Nightmare.”

The crossface chicken wing has been a staple in pro-wrestling for many years and became popular in 1994 when Bob Backlund utilized it as his finishing move in his heel run to capture the WWF Championship ten years after his last reign as champion. The move is also utilized today by multiple-time WWE Women’s Champion, Asuka, who redubbed it the Asuka Lock. What makes this utilization in Love Live! Sunshine!! humorous is there really isn’t any other indication that pro-wrestling exists in this universe. This makes me want to see a school idol group that acts like pro-wrestlers, or does pro-wrestling on the side, similarly to the idol wrestlers in Tiger Mask W. However, idols and wrestling being combined isn’t something that’s too surprising since back in the early '90s, companies like All Japan Women’s Pro-Wrestling were trying to do something similar by having certain wrestlers also do singing performances at shows as well. 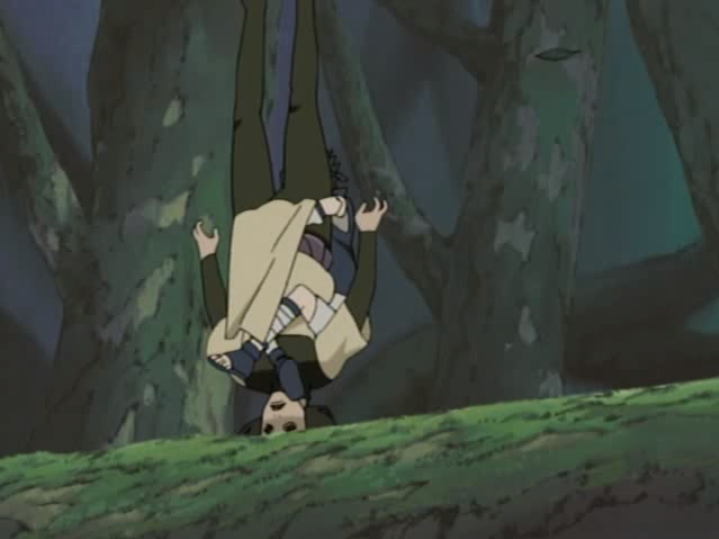 Earlier we discussed when Sasuke was on the receiving end of a pro-wrestling move, but over 200 episodes before that, he was giving one out. In the midst of the Chunin Exams, Sasuke is able to grab a disguised Orochimaru, flip in midair, and then hit a devastating piledriver. Given that the episode this was featured in aired in 2003, this was just about when Petey Williams was beginning to popularize his front-flip piledriver known as a Canadian Destroyer. It’s certainly not like nowadays where it’s become a much more common move in pro-wrestling, so seeing it this early in Naruto is a bit shocking.

Now, some people might say this is supposed to be just a regular piledriver, but Sasuke clearly is able to turn Orochimaru’s body 180 degrees to land in a piledriver position, so it totally counts. There was probably some old-timer ninja that got in a huff about Sasuke using it, but he shouldn’t listen to them. I still find it wildly entertaining that in the midst of this big fight early in Naruto, one of Sasuke’s key moves is a piledriver. Given the danger associated with that move, it’s smart since he’s able to smash Orochimaru’s head from quite a big drop. That should be an incredibly devastating maneuver. Too bad Orochimaru is a slithery one and won’t be put down that easily. 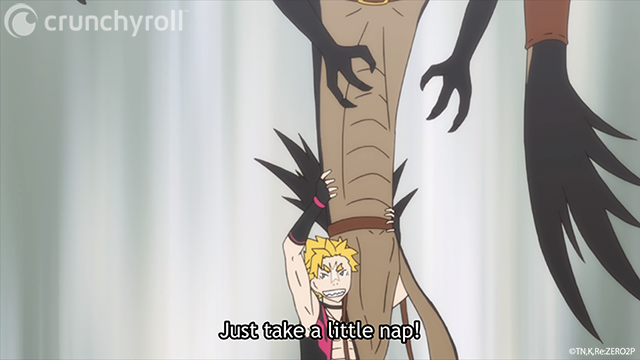 Hey, wait a minute. I was told this was a dragon suplex! Okay, yes, that is a dragon, and it is getting suplexed. I think we’ve been bamboozled here. In all seriousness, seeing a dragon get suplexed is such a bizarre sight, but a great one. I don’t even think you could utilize an actual dragon suplex — a move invented by Tatsumi Fujinami and currently utilized by Hiroshi Tanahashi and Kenny Omega — because how are you going to lock up a dragon to perform the move? They’d just slip out easily, and then you’d be in some serious trouble! Plus, even being able to use a normal vertical suplex on a dragon would be difficult since they’re so bottom-heavy, meaning you’d really have to use some strength to lift them up and slam them. So, while this is just a regular suplex, it’s still pretty impressive, and maybe one day we’ll get to see an actual dragon take a dragon suplex. 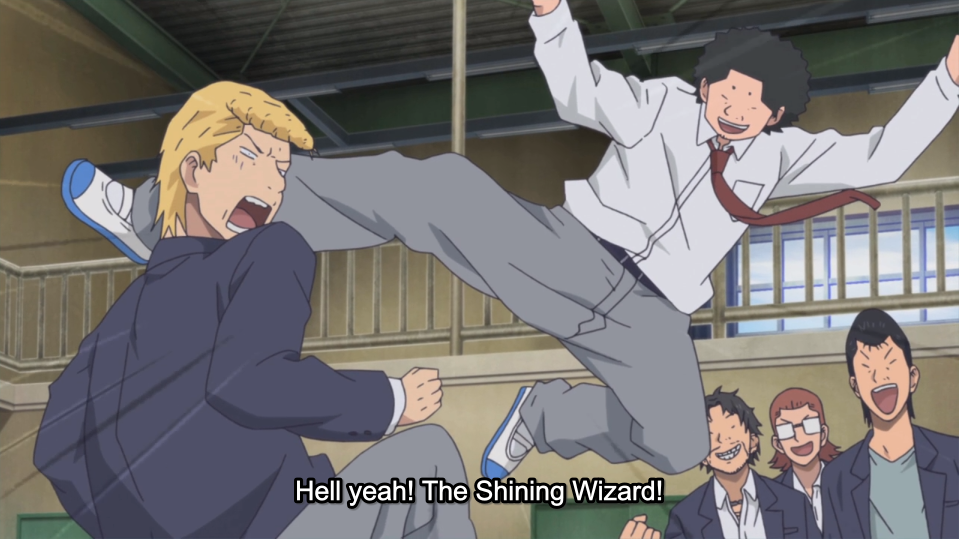 Guys in a sports club performing pro-wrestling moves on each other just makes the most sense, especially when you have a group of dudes like the basketball club in Ahiru no Sora. A group of mostly former delinquents who are used to having some knockdown, drag-out fights. Although, I don’t know if I would consider utilizing a Shining Wizard — a strike where you step off an opponent’s knee and slam your knee into their face — in an actual fight.

The move created by Keiji Mutoh/The Great Muta that’s now used by basically everyone in pro-wrestling is fun to see used in a scuffle between brothers Chiaki and Momoharu early on in the series. Everyone that sees it gets really excited when Chiaki pulls it off as well, and he does so quite effectively. Since we see later on that those two would constantly get into fights growing up, this means the two of them throwing out pro-wrestling moves at one another is probably a common occurrence. The one downside to this is that using a Shining Wizard in an actual basketball game would be a very terrible idea and not something you’d want to try. 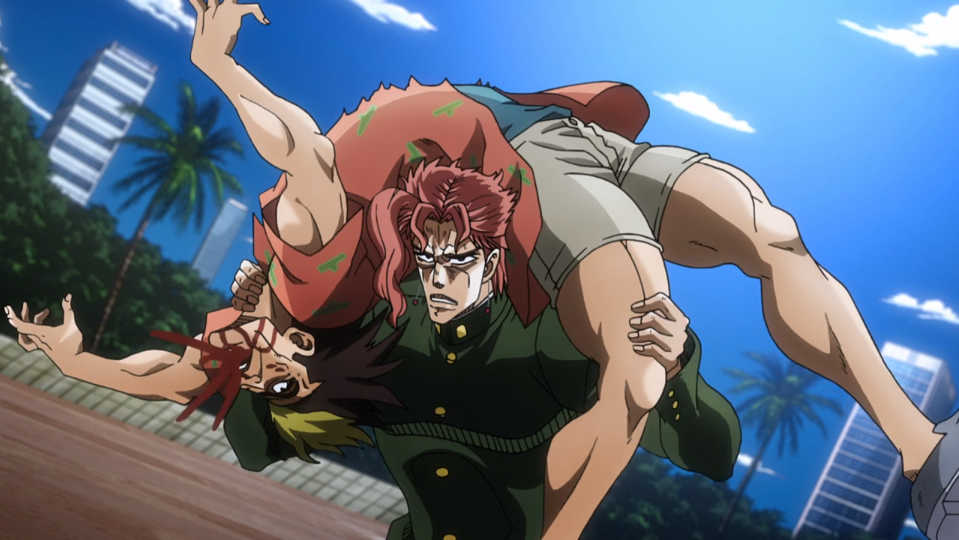 Apparently Rubber Soul was really into pro-wrestling when he disguised himself as Kakyoin to try and take down a thief. That poor thief didn’t know what was about to happen when he got put into an Argentine Backbreaker Rack — otherwise known as the Torture Rack — to, well, torture the thief. It’s kind of surprising there’s not more random pro-wrestling moves in JoJo given the ridiculous nature of the series and that fact that everyone looks like pro-wrestlers from the 1980s.

In the world of JoJo though, this move looks absolutely devastating because it looks like Rubber Soul is about to snap this thief’s spine in two just by the amount of torque and pressure he’s putting on his body. That’s probably what would’ve happened if it weren’t for Jotaro coming over to be like, “Hey dude what are you doing?!” Since this is the episode where this imposter Kakyoin does some very weird stuff, it’s safe to say that pro-wrestling is responsible for the famous meme of Kakyoin getting very into licking a cherry.

This is but a small sample size of various instances where an anime has thrown in some pro-wrestling to shake things up, and I’m sure this will be by no means the last time it happens. As long as pro-wrestling remains popular in Japan and around the world, you’re certain to see at least one of your favorite characters pull off some wild and ridiculous wrestling move. The more that happens, the happier I’ll be, so let’s hope we get to see more pro-wrestling integrated into anime in each upcoming season.

What are some other instances of pro-wrestling in anime that you believe deserve a shout out? Let us know down in the comments below!