ESSAY: Is Filler Really That Bad? A Simple Inquiry Into the Nature of Time

I swear that this article appeared in the original manga 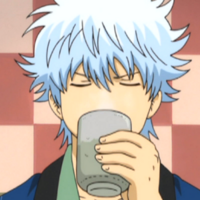 It is 2006. You are enjoying the exciting battle where Naruto’s teacher Jiraya and his friend Tsunade fight it out with the evil Orochimaru. Excited to see what will happen next, you start the next episode only to see Jiraya cry out “Oh, a hot spring?” You are taken aback. This wasn’t in the manga! What is going on? Long-suffering anime fans shake their heads. “We knew this would happen,” they say. “Naruto has entered THE FILLER ZONE.”

THE FILLER ZONE is not as common as it once was. In this era of explosive anime production, adaptations are more likely than they were to stop and recharge than to plunge into original material. But those who grew up watching anime adaptations of Shonen Jump comics like One Piece, Bleach, and Naruto remember — when the anime begins to catch up with the source comic, the staff will produce original content to buy time for the original artist to draw more material. It’s a phenomenon so infamous that the long-running comedy series Gintama riffed on it: 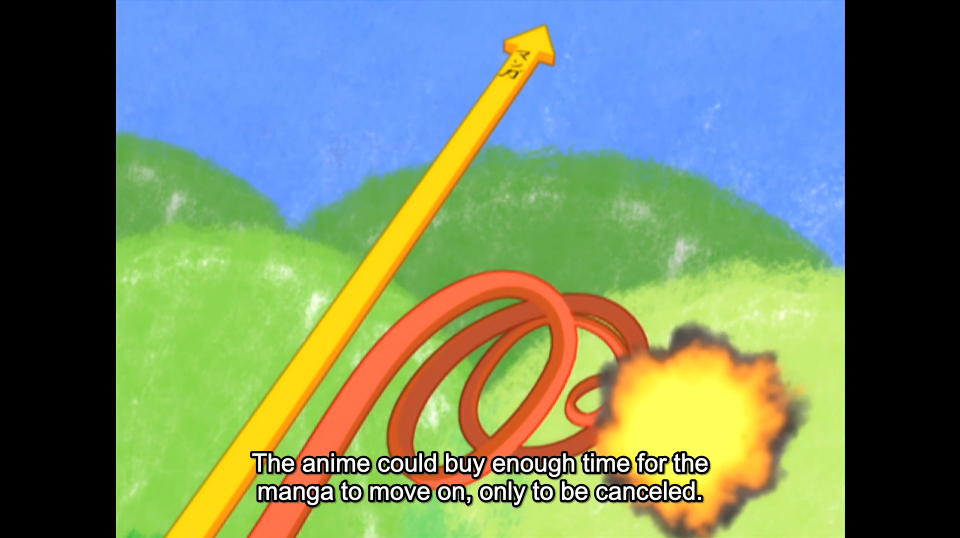 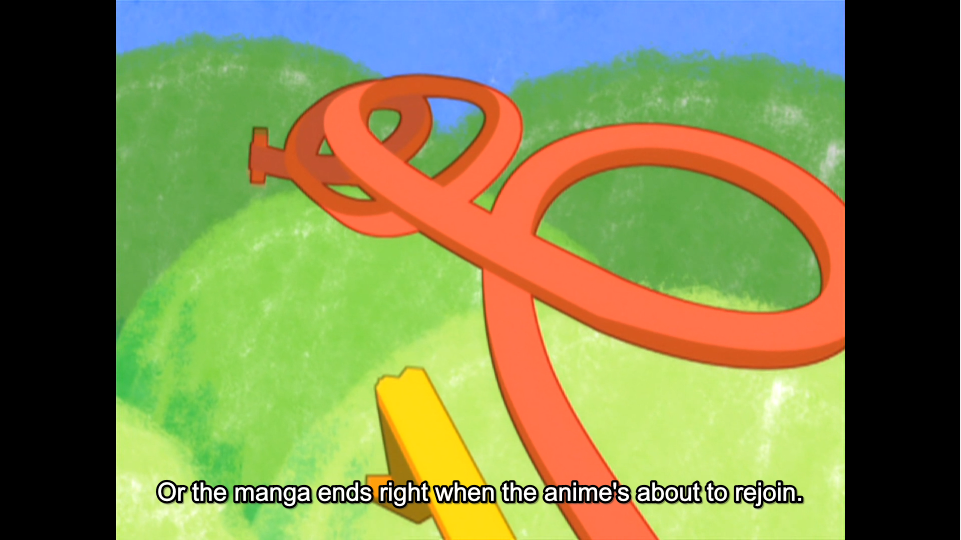 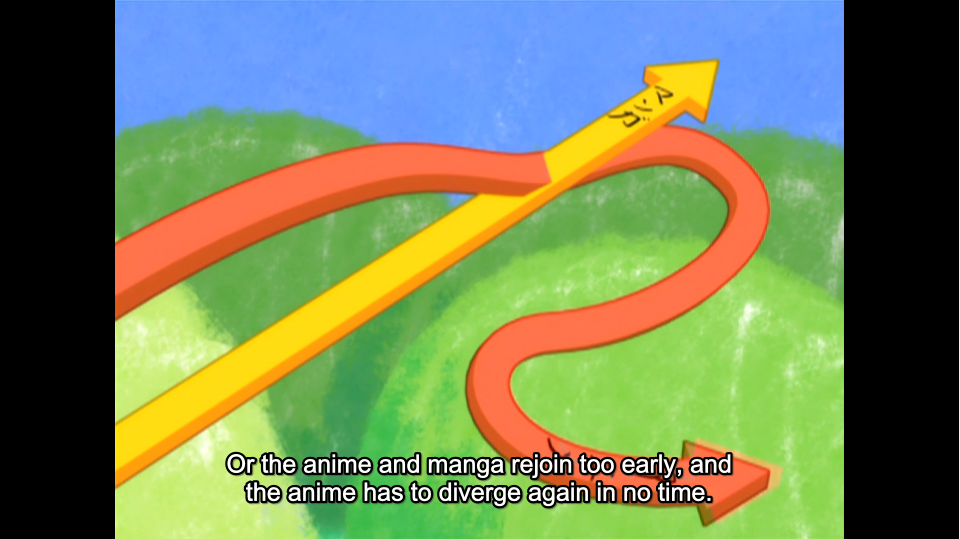 Fan tolerance for THE FILLER ZONE varies. One Piece, for instance, is structured so that original material may be easily inserted in between major story arcs without disrupting the narrative. Then there are curious cases like Fullmetal Alchemist, whose fanbase is split between the anime-original conclusion of the 2003 series and the manga-faithful remake Fullmetal Alchemist: Brotherhood. But a more common fan response is outrage: complaining when a series begins a filler arc, warning people to skip it, even compiling websites to help other fans skip “non-essential” episodes. For animators, THE FILLER ZONE is an emergency tool to be kept behind glass with other such devices like THE RECAP ZONE. For fans, it is a wasteland where animation quality suffers, heroes behave out of character, and nothing that happens ever seems to matter.

There is plenty of filler that I do not enjoy. Some of it is outsourced, some reeks of desperation. Even well-made original material in a long-running adaptation isn’t quite as fun when you know that nothing in it is allowed to affect the main story or change the characters and their relationships. But as time went on, I noticed something strange. I began to hear people talk about “filler episodes” in the original series, not ones adapted from the source material. “Don’t watch the Eureka Seven soccer episode, it’s bad!” “Don’t watch 'Jet Alone,' it doesn’t add anything to Neon Genesis Evangelion.” Certainly, there are episodes (especially in long-running shows) that are infamous for being below par, like the island arc in Nadia of the Blue Water. But this is something else: episodes that are criticized for “not advancing the story.” 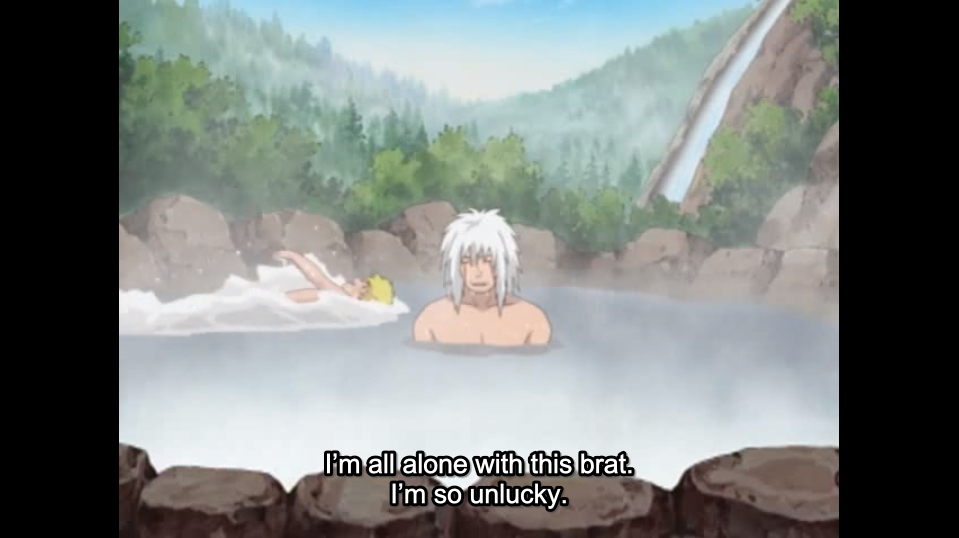 I think these people have misdiagnosed the problem. This is not a question of THE FILLER ZONE, but a question of structure and pacing. Episodes like "Jet Alone" and the Eureka Seven soccer episode serve their purpose, in that they provide breathing room and allow for other characters to shine. "Jet Alone" highlights the difficulties Misato and Ritsuko face in a predominantly male industry, and foreshadows how NERV games the system behind the backs of even its own employees. Eureka Seven's soccer episode is silly but gives some much-needed levity just before the series plunges into the final arc. In today’s era of anime, having that breathing room is a luxury most projects cannot afford.

“Breathing room” is what gives entire genres of anime its staying power. Think of the first season of Sailor Moon, which takes the first few volumes of the original comic and blows it up to 50 episodes. It may be scattershot compared to the concentrated appeal of the source material. But it works because the increased time you spend with the cast, even in seemingly unimportant moments, endears you to them. Frankly, magical girl shows flip THE FILLER ZONE on its head: rather than the filler material serving as a distraction from the good episodes, the good episodes only work because they are given context and weight by the "filler" material. After all, you can only subvert expectations if you have expectations to begin with, and nothing is better at setting expectations than playing out the daily lives of the characters for a whole year. 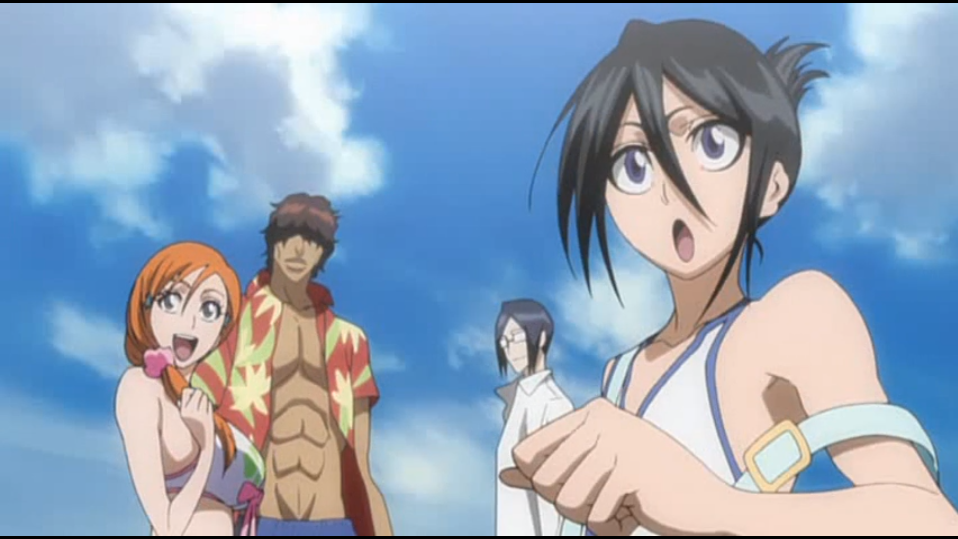 Another great example of the passage of time being leveraged to affect the viewer is the infamous "Endless Eight" arc in the second season of The Melancholy of Haruhi Suzumiya. For eight episodes, Kyoto Animation obsessively recreated the same episode with variations to simulate a time loop for its audience. For eight weeks, the show's fans threw a fit as their new favorite anime's second season was inevitably gobbled up by "Endless Eight." It's a creative choice that divides the fanbase to this day. But one thing is for certain: you could not replicate the psychic assault of "Endless Eight" any other way. True to Kyoto Animation's habit of adapting work with the most authenticity possible, "Endless Eight" does everything it can to place the viewer in the shoes of people forced to relive the same episode of anime over and over again. Their catharsis at breaking the loop is your catharsis. The time that you wasted was the point.

Not every show can or should be paced like a Shonen Jump comic. There are certain times a series can drag, or even run out of ideas. But time spent in a story giving the cast time to grow or react or even exist is not time wasted. As anime projects become more and more compressed and the number of series produced grows exponentially, I hope the industry does not forget the utility of time as a storytelling tool. Perhaps then we’ll have a new phenomenon they’ll make Gintama episodes about: THE CHILL ZONE!

Do you have a favorite filler arc? A favorite anime original ending? Is there an episode of anime you hold dear to your heart where nothing really happens? Let us know in the comments!

Adam W is a Features Writer at Crunchyroll. When he isn't exploring the limits of space-time, he sporadically contributes with a loose coalition of friends to a blog called Isn't it Electrifying? You can find him on Twitter at: @wendeego