OPINION: How I Discovered Haikyu!! (And Myself), Thoughts From a First-Time Viewer

I give my thoughts on the previous three seasons as a first-time Haikyu!! watcher 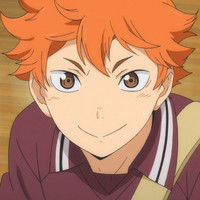 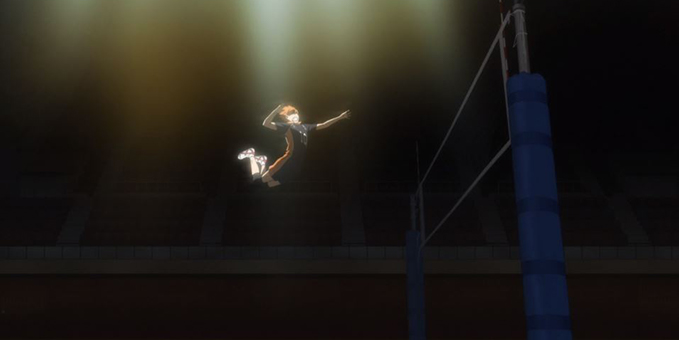 Haikyu!!'s latest season just began, and for years I have been meaning to start watching. Now seems like a great time to rectify that, so I've finally caught up and am eagerly awaiting the next arc to see how the Karasuno Crows fare.

I decided to track my thoughts on everything that happened — something of a time capsule from before the main cast joined together all the way to them competing in Nationals. 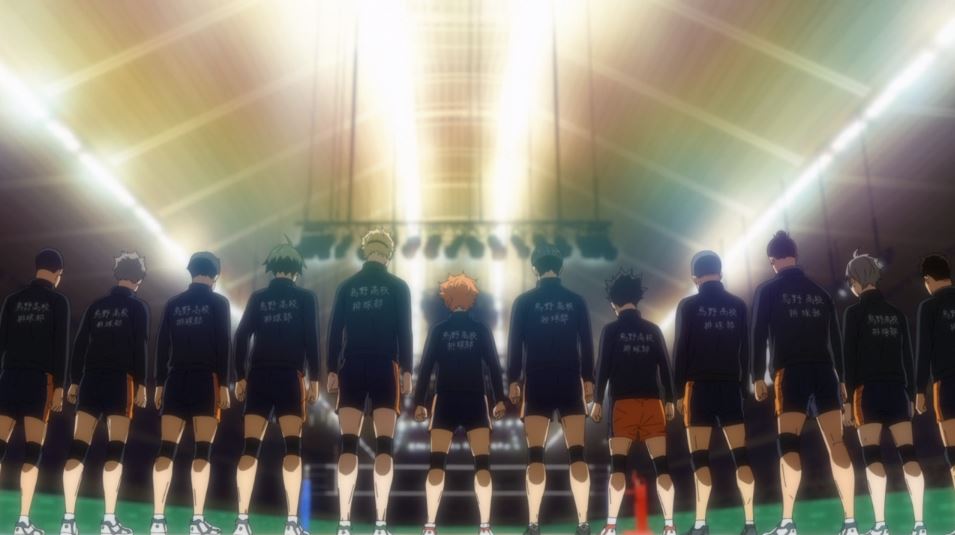 As a baseline, here is everything I knew about Haikyu!! before watching Episode 1:

I actually watched this with someone who has seen it before. She didn't spoil anything but occasionally gave insight I may not have otherwise realized at the moment. 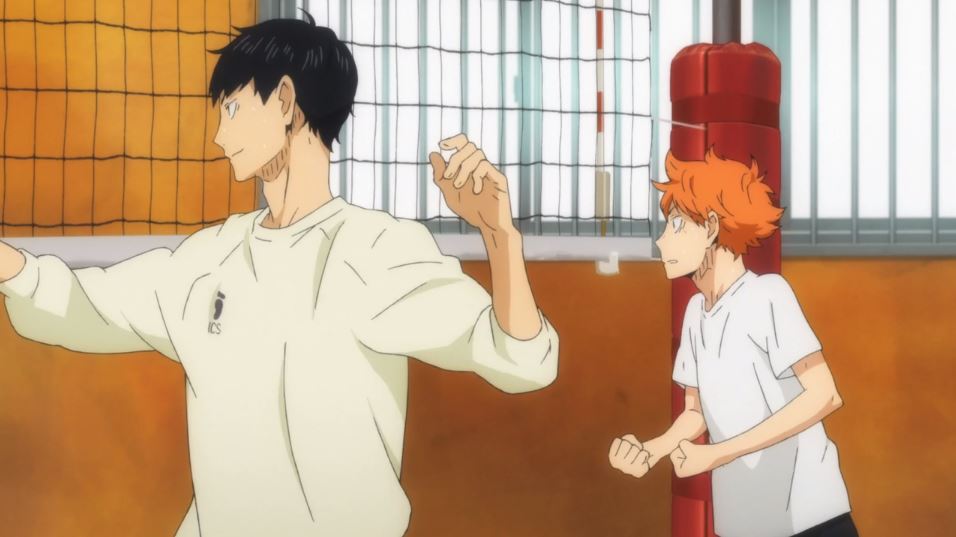 For the first part of the show, we largely follow Hinata's perspective. As I assumed going in, he's our generally underachieving but unfailingly energetic sports boy who hadn't met anyone who loves his sport as much as him until now. Specifically, he meets Kageyama, one of the best setters in the prefecture.

I started to notice that the storytelling’s actually pretty good when the newly assembled Crows get a practice game with the 4th ranked school in the prefecture. It gives them someone challenging so the main cast can see what they’re up against but also gives them a team close enough to their level that they have a real chance of winning and also keeps the truly powerful foes hidden for later arcs.

I also really appreciate that during the games, the characters try out new things, but are never truly sure that anything will work. It adds some experimentation and uncertainty to every game. 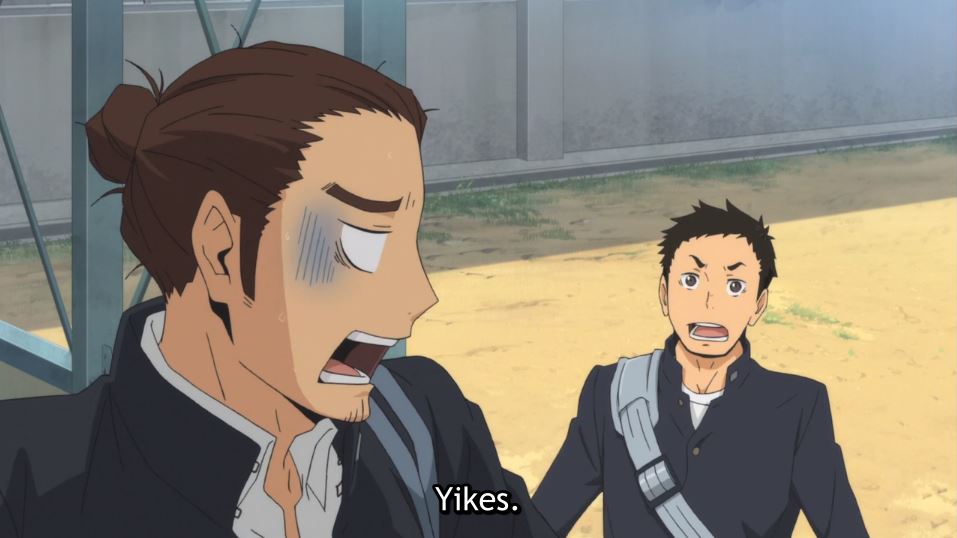 The rest of the main cast joins up with the existing group, forming the core rotation of players and major characters in the show.

One of the new characters, Asahi, showcases one of the show’s strong points for me. He's the team’s ace, but both he and Hinata grapple with performance anxiety. As my watch-along partner put it, Hinata’s anxiety comes in waves, mostly during games, while Asahi’s is more of a constant background hum.

As someone who has struggled with anxiety most of my life, I heavily identify with Asahi’s backstory, even down to not going for the spike in the final play of his flashback game due to thinking about how pointless it was since he wouldn't get it through. 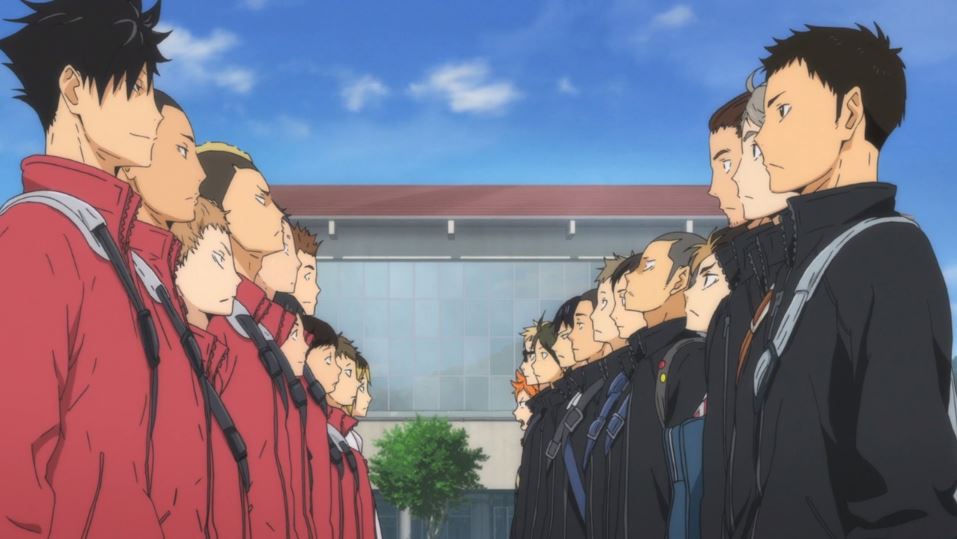 Karasuno gets its practice game against their rival school, Nekoma. Both teams have fallen from grace in recent years, so this is the Crows’ chance to prove they can crawl their way back to the top and test out their teamwork and strategies from the previous arcs.

At this point, the mind games aspect of each match starts coming through. Both teams try to figure out how their opponents think so they can react faster, while also trying to hide their own tells to keep their opponents guessing.

When Hinata first started closing his eyes to make his special fast attacks with Kageyama, I joked that his power-up was going to be just ... opening his eyes. It turned out I wasn’t far from the truth. It doesn’t work immediately, but all of the Crows start polishing their weaknesses to make for a more well-rounded team. 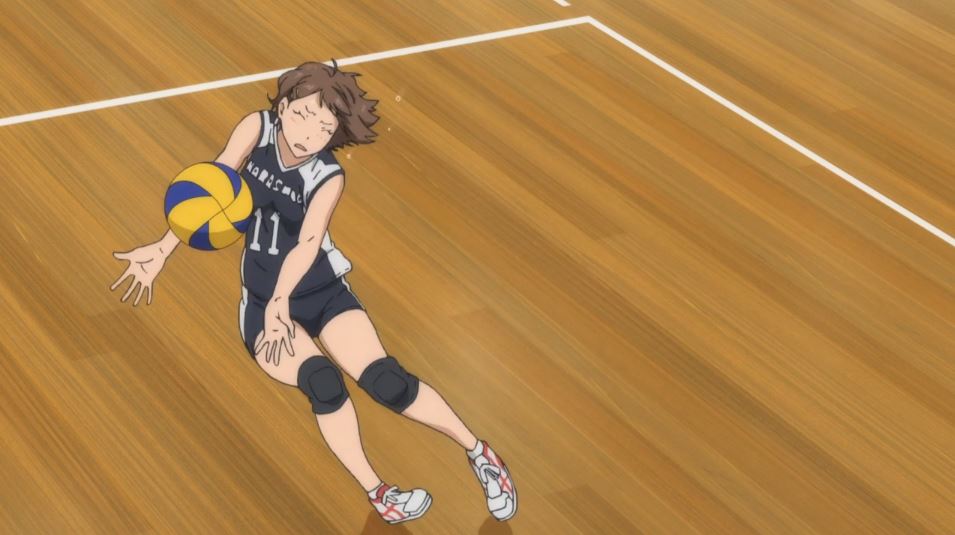 As the boys go into the Interhigh Tournament, people whisper about the “Flightless Crows.” They proceed to absolutely crush their first opponents.

The show follows the girls’ volleyball team for a bit, too, amping up the emotions at the end of the first round by cutting between the girls losing while the boys breeze through their sets.

It’s a bit unfortunate the girls are beaten so badly just to show that the boys have grown, especially since they don’t end up getting much screentime for the rest of the show outside of being in the stands or otherwise supporting the boys. 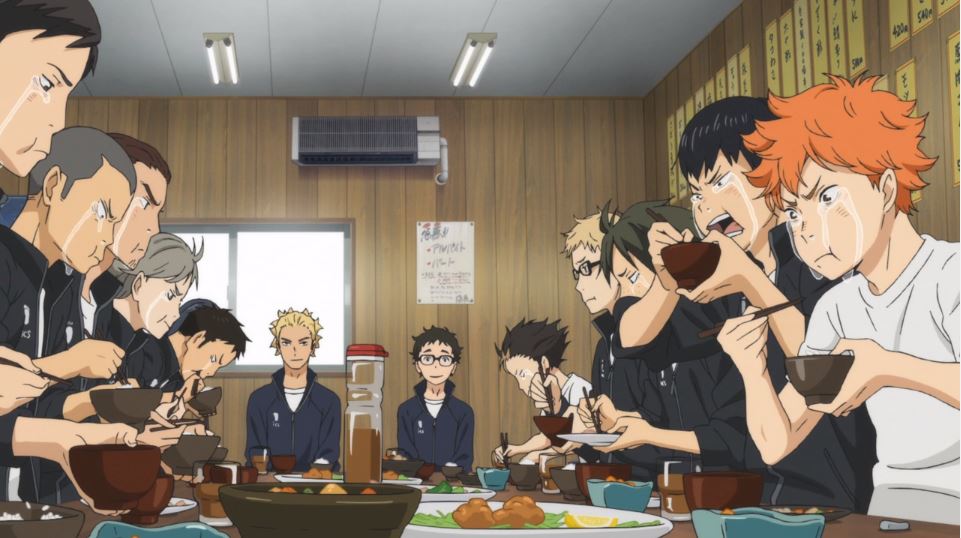 After getting through the first part of the tournament easily, Karasuno is up against two powerhouse teams. First: Daito, a school with defense so amazing it’s called “The Iron Wall of Daito.” Second, Aoba Jousai, the school that many of Kageyama’s peers, including the setter he looks up to, enrolled in.

They manage to steal a win from Daito, but ultimately lose to Aoba Jousai.

The ending of this arc was when I realized I was truly invested in the show. For one, my watch-along partner and I were silent during many of the plays instead of joking about anime tropes like we had been in earlier arcs. Second, during one of the final scenes of the season, the entire team went out to eat after the game and we just silently watched everyone slowly start eating and then mutually begin crying. 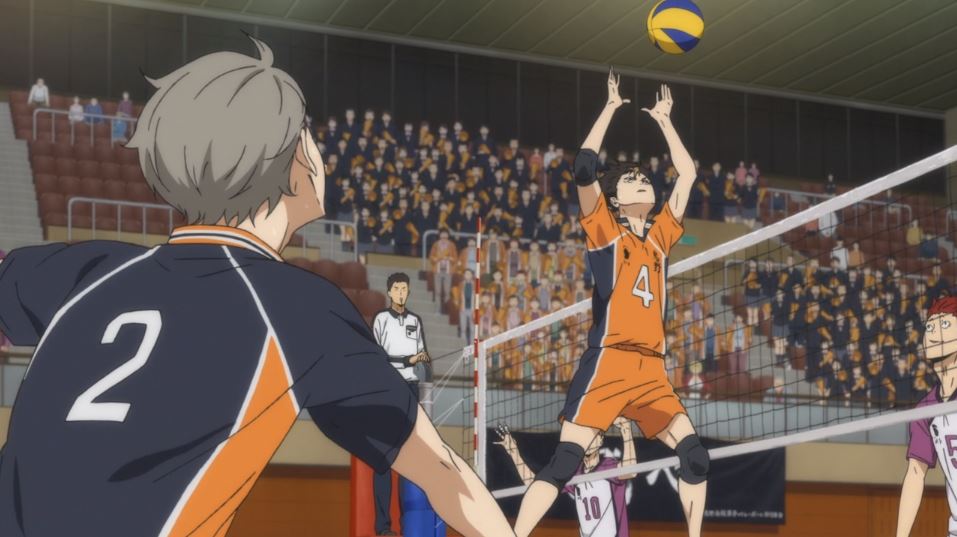 As we start Season 2, there is a very clear and welcome difference almost immediately — the animation and camerawork are a lot better. Neither were bad in Season 1, but now they’re on an entirely different level. As my watch-along partner put it, there is some very naturalistic movement in some of the scenes.

Also, this is when the team got a second manager, Yachi. I seriously cannot think of a character I have more personally related to in an anime than Yachi. She is a nervous wreck that is constantly apologizing and gets spooked by every little thing, even as small as someone talking to her. She outright views herself as “Townsperson B,” from when she played that role in drama club. I turned to my watch-along partner and said, “I’m in this picture, and I don’t like it.”

Meanwhile, in the actual plot, my watch-along partner pointed out that while the team started developing specialized skills at their summer camp, the majority of their training seems to be devoted to getting down the fundamentals of every part of the game, then practicing them constantly. Like how Nishinoya is normally the libero and is almost exclusively receiving, but after seeing an opponent’s strategy, wants to learn to toss so he can replicate something he previously lost against. 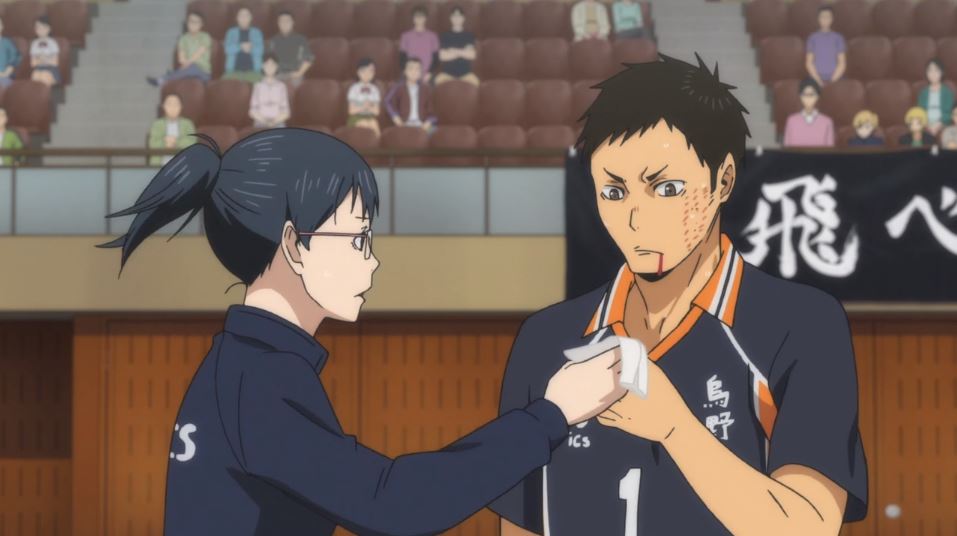 The show uses the prelims as an opportunity to shine in two new ways. First, if a player is injured, they're checked to see if it's serious, then given a proper medical exam off the court. No powering through a concussion.

Second, since main characters are no longer guaranteed to be on the court for the entire game, the cast expands to include other members we previously haven't focused on.

My watch-along partner mentioned Ennoshita, Daichi's relief player, a few times throughout the show, so I knew he was going to be important eventually. But to give an idea of how little he impacted things until this point, when he was called in, I exclaimed that they were putting Steve McBlandman in the game. Despite that, he really does get to shine on the court. He’s a nervous wreck at first (join the club), but he’s also most likely to take over as captain once Daichi graduates and proves himself to be a reliable teammate by the time Daichi returns. 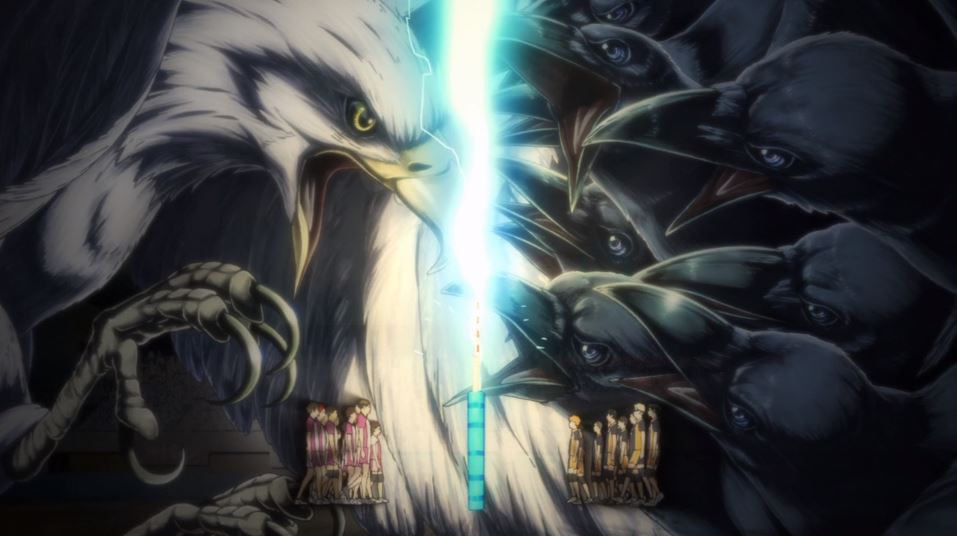 In terms of storytelling, there’s not much to add for this game. The two teams are established factions and we know the stakes, so it’s more of a puzzle to see who can find new strategies during the game and outthink the other team, which is made harder by the rivals bringing in a totally new player referred to as "Mad Dog."

Eventually, Karasuno wins, ending Season 2 with a promise that the finals of the qualifiers for Nationals will be the start of Season 3. Due to knowing a few details ahead of time, I already know a single game will be the entirety of the season. 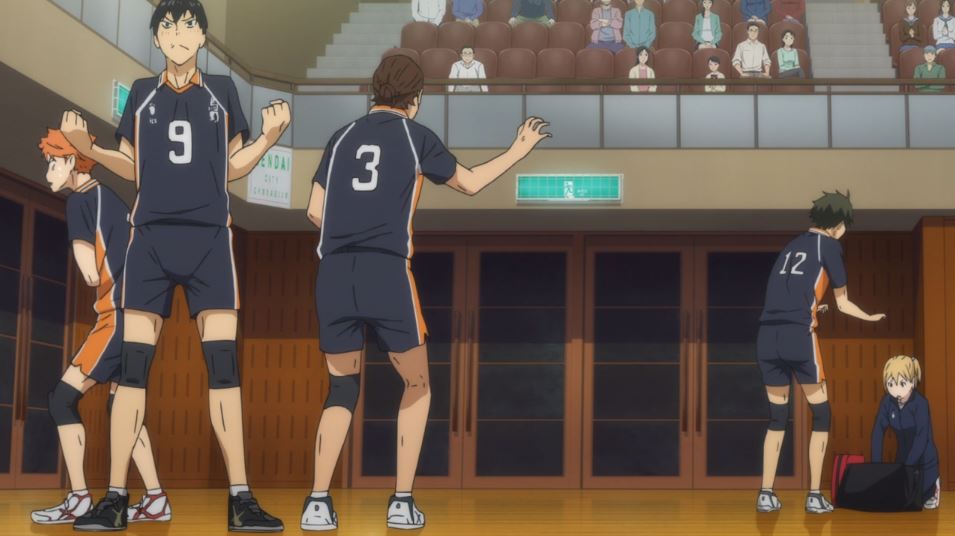 As both teams step onto the court and warm up, we are reminded that our heroes are pretty much all nervous wrecks, with most of the team in various stages of being curled up on the ground or asking for nausea medication. And, honestly, I was too. By the time the game hits set four, I wanted to grab my inhaler.

The Crows are up against Shiratorizawa, a team with Ushiwaka, a player so strong that early in the game, it took three blockers and a libero just to return his attack, and later on he managed to dislocate a blocker’s finger with a spike. 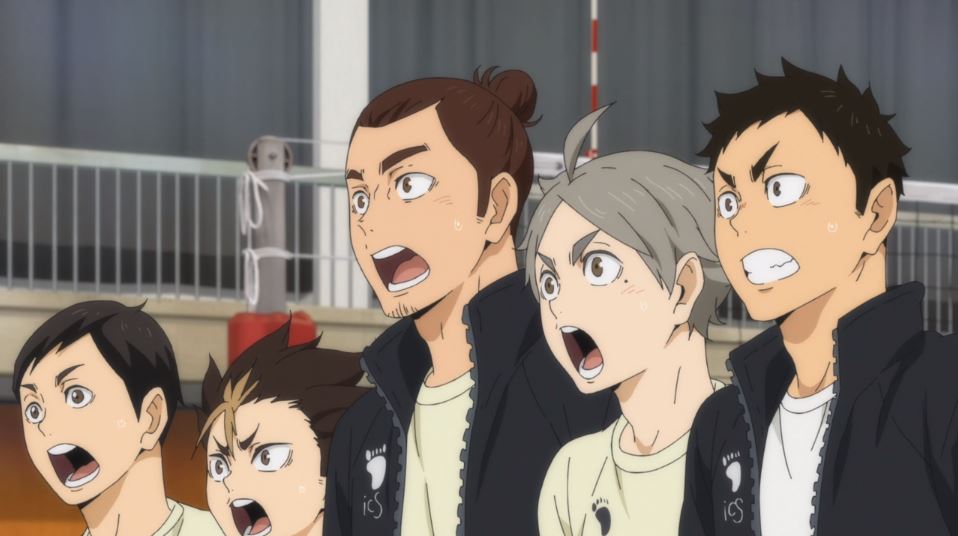 Full Disclosure: I was so invested in this game and the following season I actually forgot to take notes, so everything from here on is a second watch!

In my opinion, everyone gets to shine by the end of the game. Nishinoya sets up a full team synchro attack with his libero toss, Tsukishima is the only person whose blocks come close to keeping up with Ushiwaka, and so on. 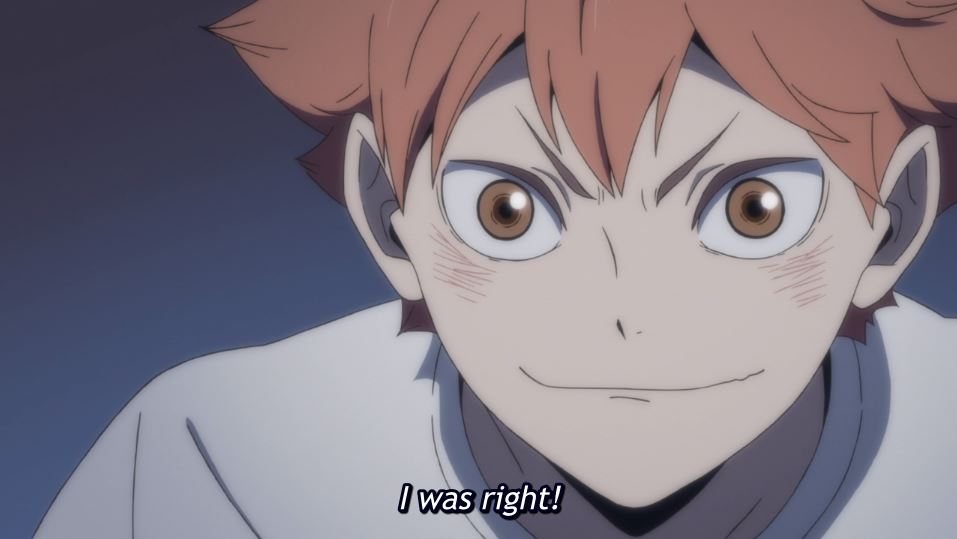 The first half of the season starts with some of Karasuno’s players being invited to special training camps. Hinata, being too impatient to accept that he hadn’t been invited, infiltrates one.

Since he wasn’t invited, he’s not allowed to play, leading to him needing to watch the players and game instead of the ball for once. As a result, he starts learning to read peoples' tells and building an intuition of how to move, rather than just relying on instinct.

Or, as I said to my watch-along partner the first time around, Hinata has reached his ultimate powerup: thinking. 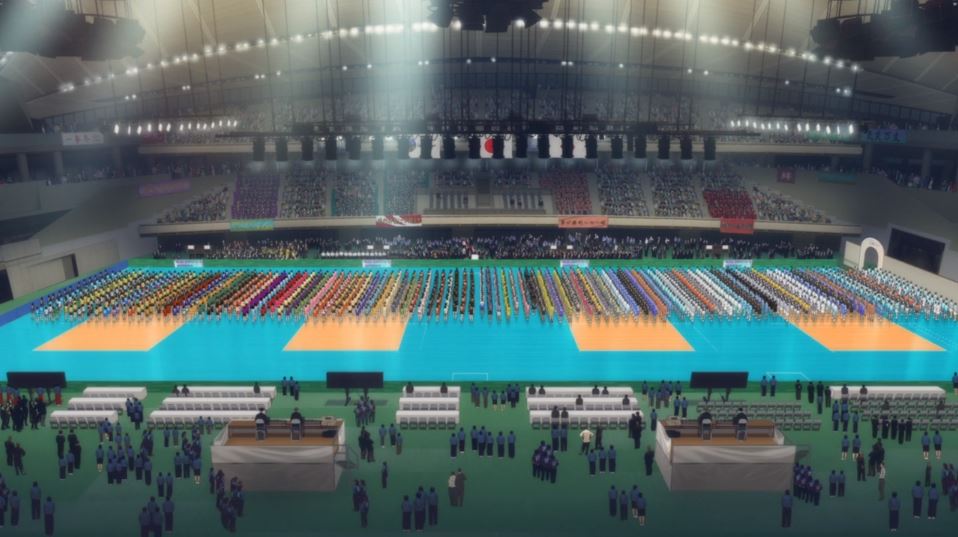 In the interstitial time between arcs, the team has a practice game against Date Tech again so the Crows can get used to playing together after being apart. We get some character moments, like all the third years going to a shrine on New Year’s, and when the team arrives in Tokyo we finally get a bit of Kiyoko’s backstory.

It’s hard to pin down what exactly about it worked, but it felt really nice to see the third years all going to a shrine together in their final months before the end of high school.

And with that, the Spring Tournament, a.k.a. Nationals, begins. 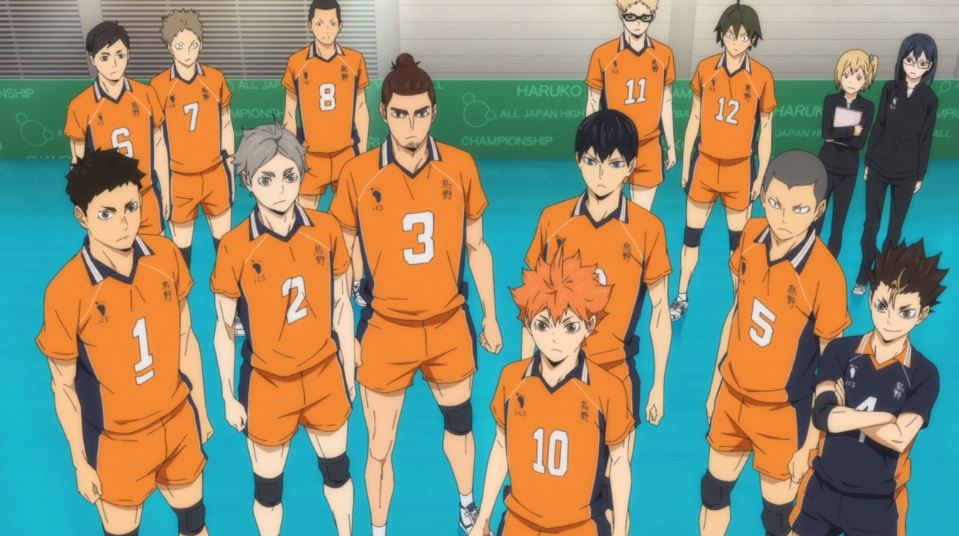 After going through over 70 episodes of Haikyu!!, I can say with absolute certainty I’m sticking around until the end. I skimmed over a lot of details so every section wasn’t a page long (and even then the first draft of this was over 4,000 words), but every game is filled with strategy, mind games, and experimentation.

Outside of the games, the show does a great job of building up the cast so the rivals are well-realized characters in their own right. Not the most complex in anime, but more than a wall for the main characters to climb over.

All in all, the show is absolutely worth the watch. It'll take a while to get through, but it's also easy to pick back up if you need to stop partway through.

What are some of your favorite moments in Haikyu!!? Are you watching the second half of the newest season with me? Who is best boy? Let me know in the comments!