FEATURE: Every Thing You Need to Know About That Time I Got Reincarnated as a Slime Before Season 2

Catch up on the antics of a friendly slime who builds a nation with this handy guide for the first season! 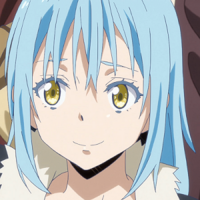 *Season 2 of That Time I Got Reincarnated as a Slime kicks off on January 12, 2021, so be sure to catch up on all of the previous episodes here.*

Whether you prefer your “reincarnated in a parallel world” fantasy adventures in light novel, manga, or anime form, That Time I Got Reincarnated as a Slime has got you covered, and since the TV anime adaptation is returning to Japanese TV (and Crunchyroll) for a second season soon, there's no slime-time like the present to absorb a quick refresher on what makes the series such a fantastic, comedic, and dramatic success.

**Take heed, gentle readers, there are MASSIVE SPOILERS ahead, so read on at your own discretion.** 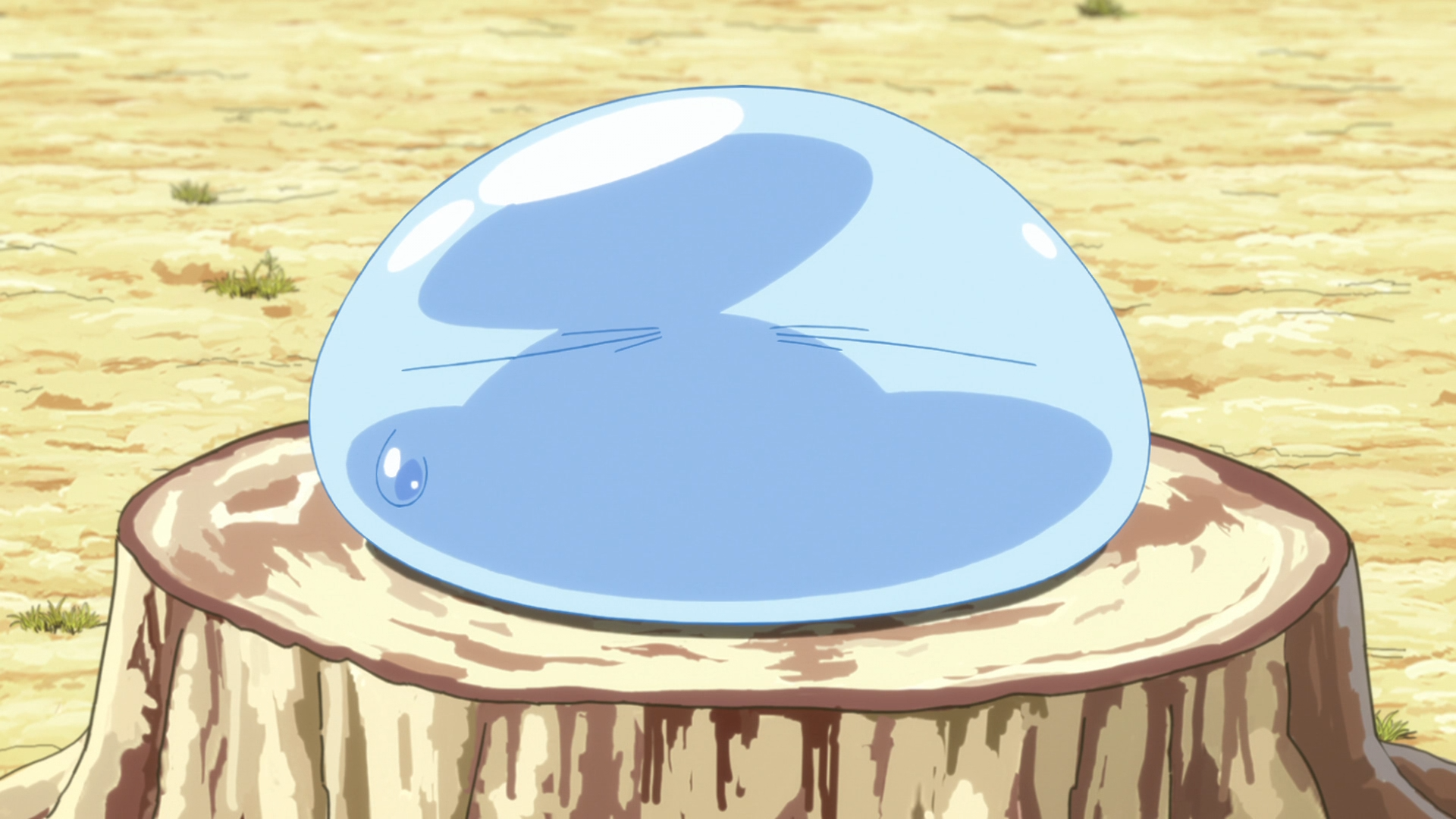 The Story So Far

During a random act of violence, Mikami Satoru, a humble office worker, is fatally stabbed and his dying thoughts are interpreted as wishes for his next incarnation. He reincarnates in another world in a body that matches these wishes: a lowly slime, one of the weakest monsters around. However, with his two Unique Skills (Great Sage and Predator), he begins exploring his environment, absorbing other monsters and gaining their Skills, and quietly growing stronger.

The humble slime meets Veldora the Storm Dragon, a primordial being of immense power. The two strike up a friendship and exchange Names. Newly dubbed “Rimuru Tempest,” the slime agrees to help Veldora escape his centuries-long imprisonment by absorbing the dragon and studying the magical seal, Unlimited Imprisonment, that was placed upon Veldora by the Hero.

Veldora's disappearance sparks huge consequences because the Storm Dragon is no longer able to protect the Great Forest of Jura, which he claimed as his territory. The monsters of the forest scramble to establish a new pecking order while neighboring nations investigate, and Rimuru — through random acts of kindness — finds himself responsible for protecting a growing new nation of demihumans such as Goblins, Ogres, Orcs, and Lizardmen.

Along the way, Rimuru befriends Humans and Dwarves and draws the attention of the powerful Demon Lords. The humble slime also comforts a dying hero, Shizue Izawa, and inherits her will and the ability to mimic a human form. After foiling the Demon Lords' plots to unleash the Orc Disaster and Charybdis — beings of world-shaking power — the first season concludes with Rimuru rescuing Shizue's students from certain death and returning home to lead the fledgling nation known as the Jura Tempest Federation.

The Ways of Another World 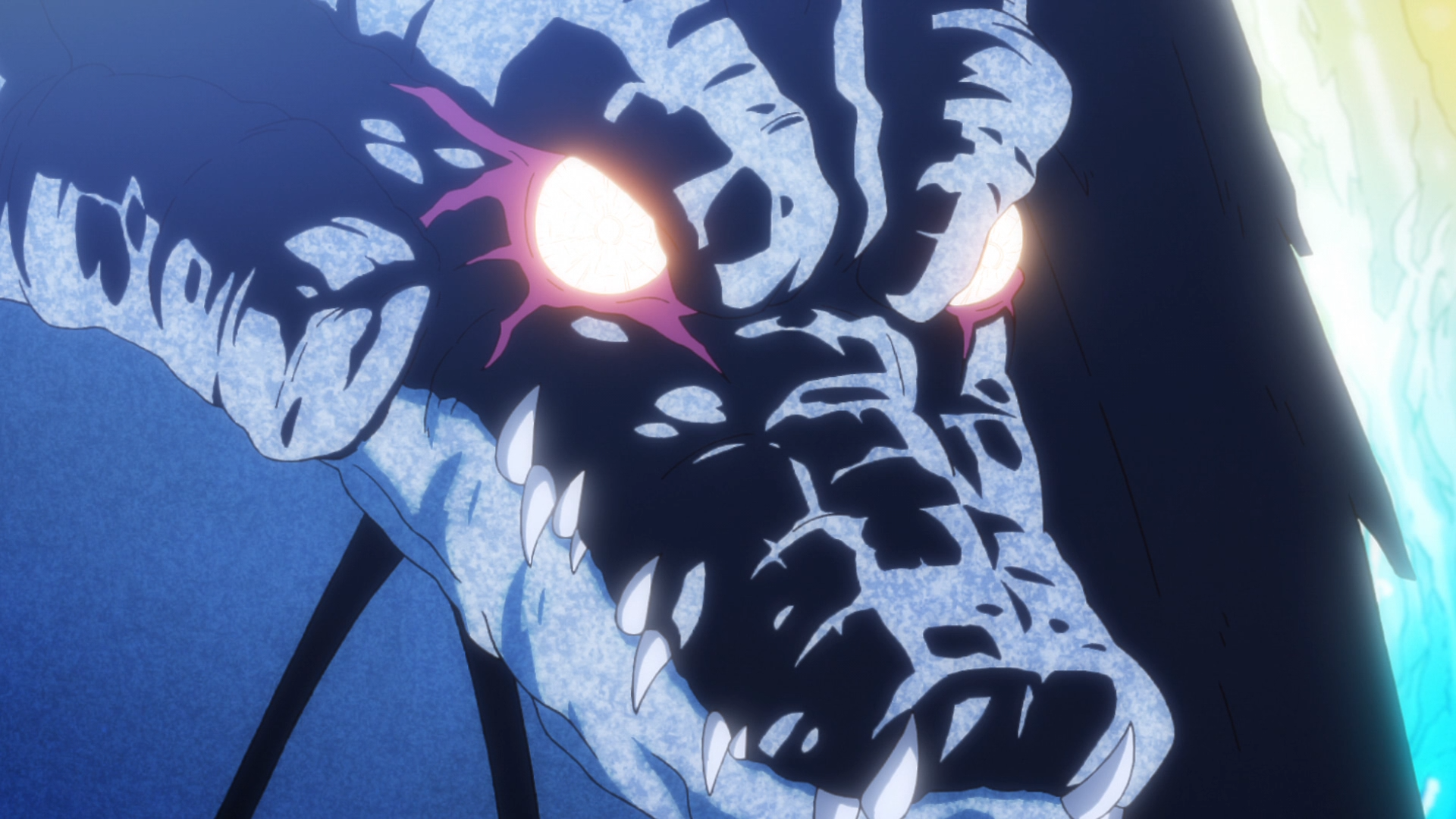 The world of That Time That I Got Reincarnated as a Slime is a high fantasy setting in which magic is ever-present, powered by microscopic magical particles known as “magicules.” Beings of great power — such as Demon Lords, human Heroes, and Veldora — also possess intense concentrations of magicules, and using their Skills depletes their magicule reserves, which take time to replenish. 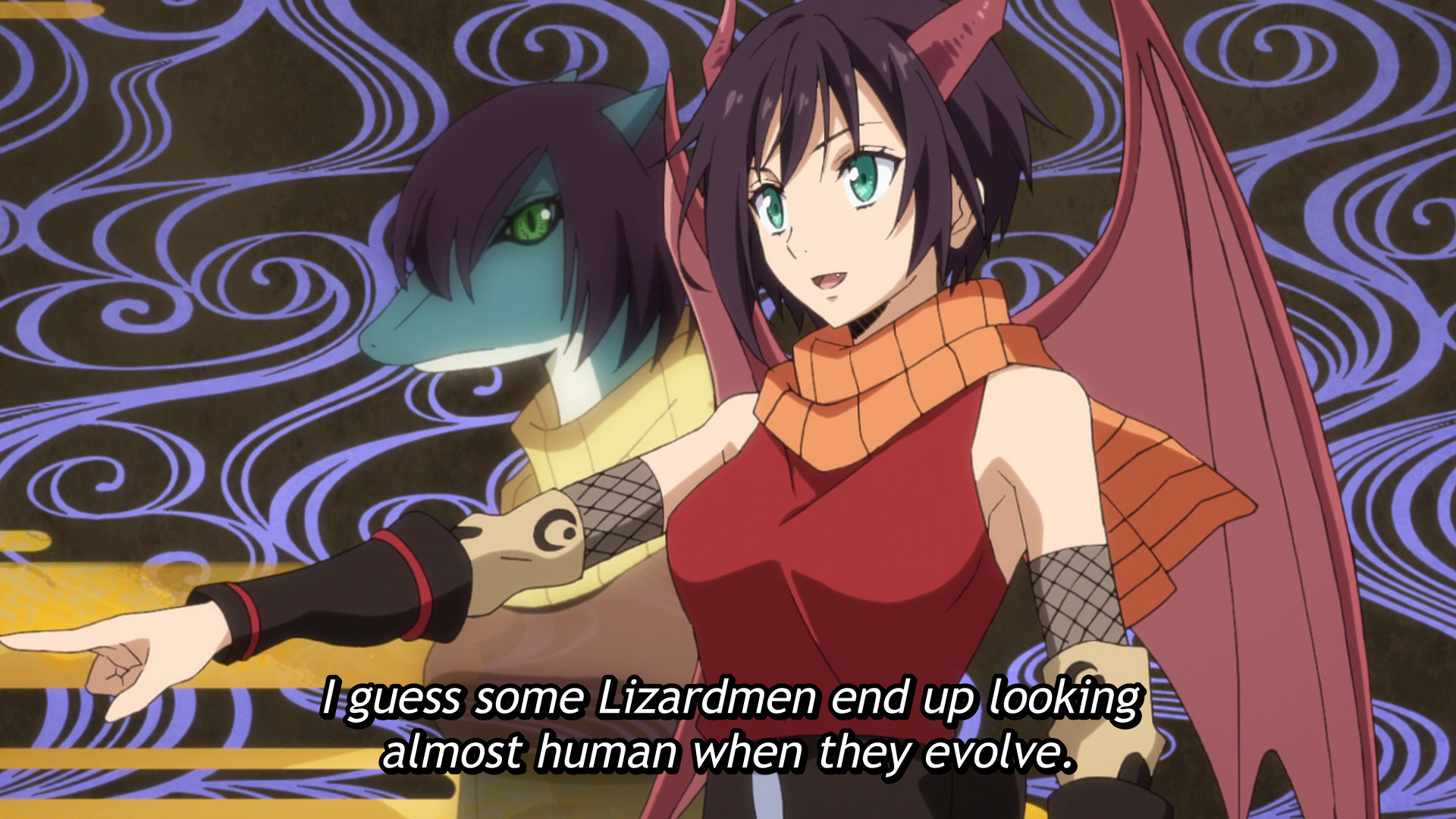 The inhabitants of this magical world (including Rimuru) demonstrate uncanny abilities known as Skills, which allow them to perform magical feats that defy the conventional laws of physics. Extra Skills and Unique Skills are more powerful, and different Skills can be combined into new Skills with greater potency.

For monsters, possessing a Name conveys great power, potentially granting new Skills and/or causing the monster to evolve into a new form. For example, when he receives the name of “Geld” from the majin Gelmud, the leader of the Orcs is promoted to Orc King and gains the “Starved” skill. 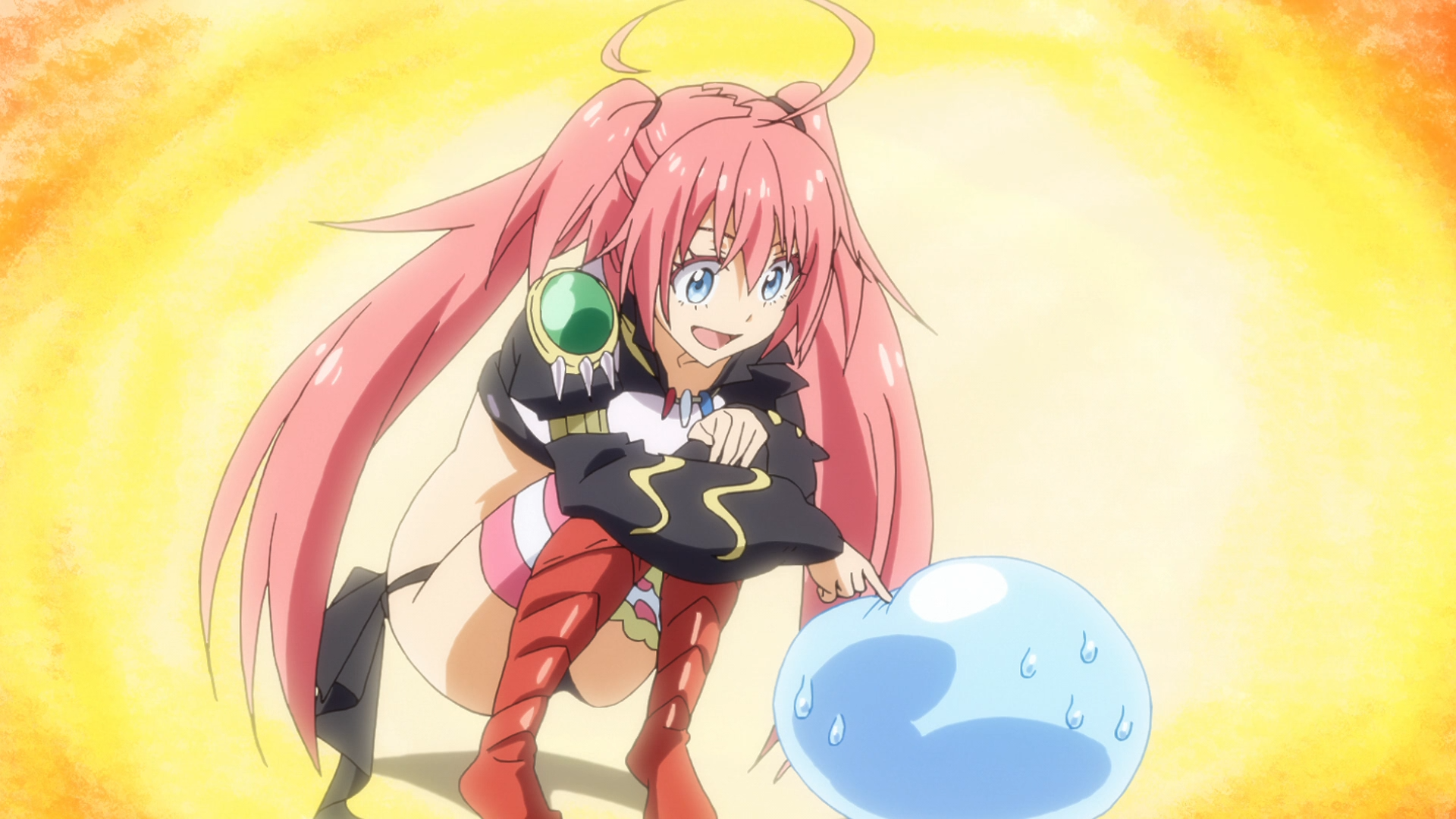 Towering above most other beings are the Demon Lords, a group of inscrutable beings of immense physical and magical power. Some Demon Lords are malevolent, while others are less openly hostile, but all of them possess strength that is capable of re-shaping the world. It is possible for a less powerful being to become a Demon Lord, a process which Ramiris describes as a “fall from grace,” although the exact process of creating a new Demon Lord has not yet been fully revealed. 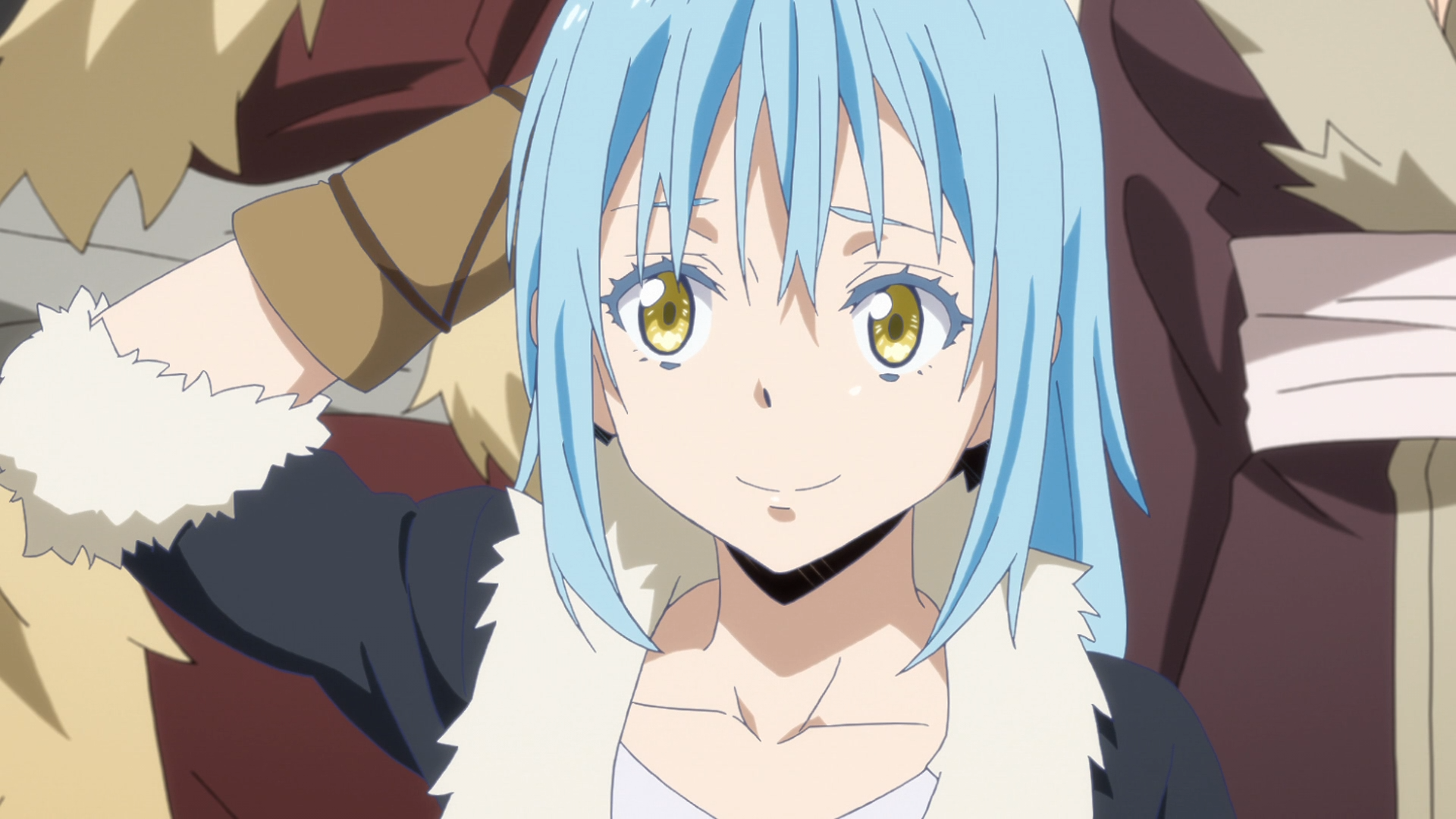 Rimuru Tempest – the protagonist of the show, a humble general contractor turned super-humanly powerful slime. Rimuru's “Great Sage” and “Predator” Unique Skills allow him to absorb and analyze practically anything.

Veldora Tempest – a primordial Storm Dragon, Veldora Tempest is currently tucked safely within a pocket dimension inside Rimuru's stomach while the two of them attempt to undo the Unlimited Imprisonment seal that was placed upon the dragon. Veldora's absence from the material world kicks off the events that eventually lead to the formation of the Jura Tempest Federation.

Shizue Izawa, aka Shizu – a hero known as the “Conqueror of Flames”, Shizue was summoned to this world by the Demon Lord Leon Cromwell and bonded with the superior spirit, Ifrit, granting her the power to control flames. Shizue eventually dies of old age, but she passes on her will, memories, and appearance to Rimuru, who absorbs her as her final request.

Ranga – formerly a Direwolf, Ranga evolves into a Star Tempest Wolf through his service to Rimuru. Ranga leads his pack and serves as Rimuru's primary bodyguard, and he is a very good boy, yes he is.

The Goblins – After being granted names and evolving into Hobgoblins and Goblinas, the inhabitants of Goblin Village along with their Direwolf companions are the first ones to band together under Rimuru, eventually transforming their humble rural village into a mighty nation.

The Ogres – Although few in number after their village is slaughtered during the Orc invasion, when granted names the Ogres evolve into Kijin and voluntarily choose to serve under Rimuru, finding a strong sense of purpose in their new roles as warriors, spies, and court advisors.

The Lizardmen – A proud, swamp-dwelling people, the Lizardmen evolve into Dragonewts after Rimuru saves them from the Orc invasion and grants them names. They use their fishing, hunting, and gathering skills to provide food-stuffs for the Jura Tempest Federation, and key members such as Gabiru and his sister Soka also help with research and espionage, respectively.

The Dwarves – Led by the Hero King Gazel Dwargo, the Dwarves of the kingdom of Dwargon are a sturdy and industrious people. After an initial misunderstanding, Rimuru gains the aid of Kaijin, a master craftsman, and Vesta, a brilliant researcher, as well as the three brother artisans Garm, Dold, and Myrd, who all take prestigious positions in Rimuru's capital city.

The Orcs – After Rimuru brings the Orc invasion to an end by absorbing the Orc Disaster Geld, the Orcs are allowed to join the Jura Tempest Federation under the leadership of Geld's son, who inherits his father's name. With their great strength and physical endurance, the Orcs provide an excellent labor force, building roads and aqueducts for the Jura Tempest Federation.

Demon Lord Milim – One of the most physically strong Demon Lords in existence, Milim surveys the Jura Tempest Federation out of idle curiosity and ends up befriending Rimuru, who keeps her volatile, childish personality mollified with snacks, sweets, and plenty of praise.

The Free Union Guild – An organization of adventurers based in the neighboring country of Ingrassia, the Free Union Guild is led by Grandmaster Yuuki Kagurazaka, another transplant from Japan. Rimuru wins Yuuki over with the power of pop culture: an unlimited supply of manga drawn from Rimuru's memories, and so the Jura Tempest Federation and the Free Union Guild remain on good terms.

Shizue's Students – Kenya Misaki, Ryota Sekiguchi, Gale Gibson, Alice Rondo, and Chloe Aubert are children who were summoned to this world from Earth, but their small bodies can't contain the magical energies bonded to their souls by the summoning process. With the help of Demon Lord Ramiris, Rimuru saves their lives by encouraging superior spirits to dwell within the children, allowing them to regulate their powers and fulfilling Shizue's dream of protecting them. 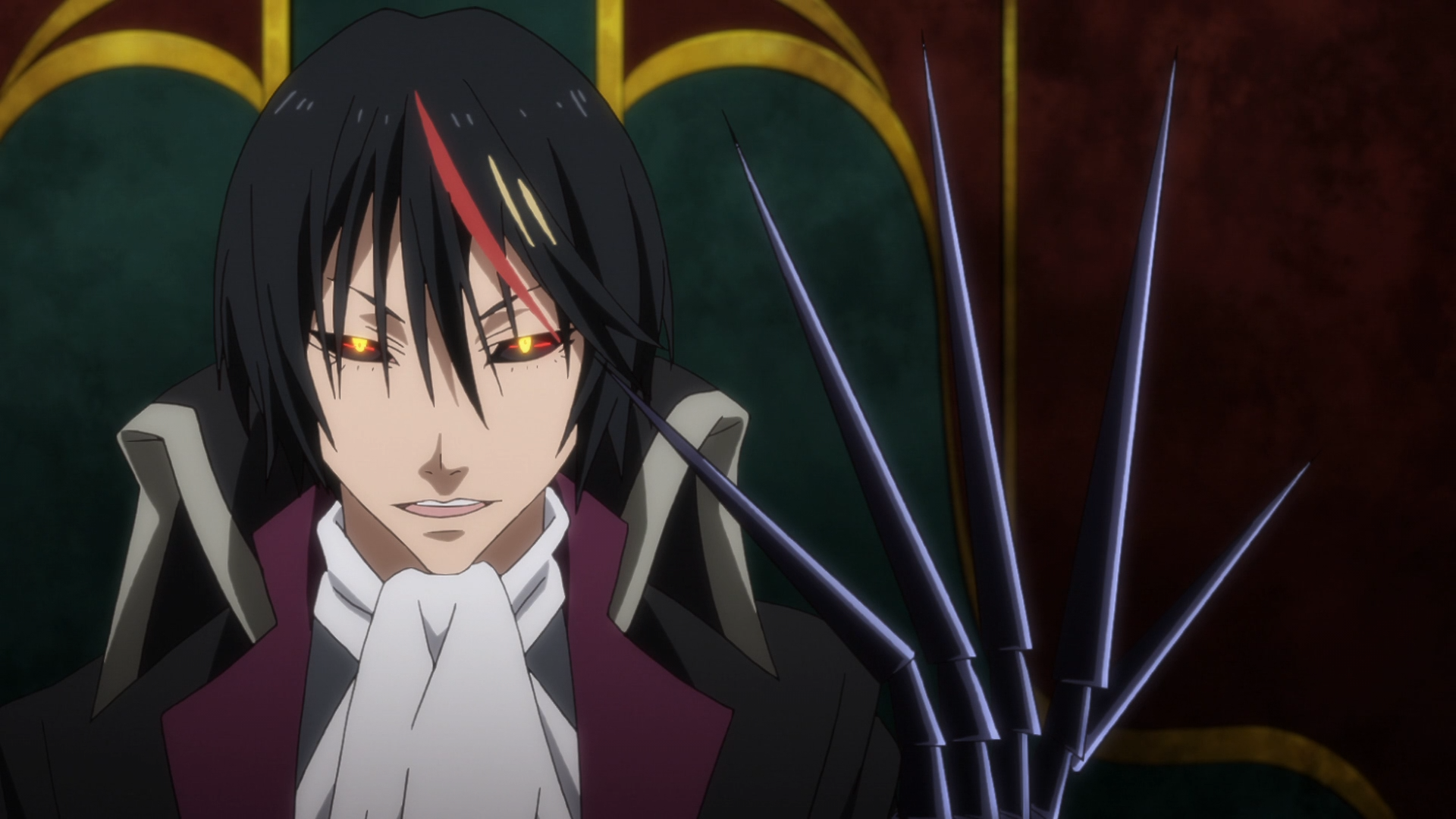 Demon Lord Clayman – A manipulative schemer responsible for unleashing the Orc Disaster on the Great Forest of Jura, Clayman's current plans have been foiled by the intervention of Rimuru, but the Demon Lord seems unconcerned with this defeat and has plenty of other plots at his disposal.

The Orc Disaster – A tragic figure driven by unquenchable hunger, Geld the Orc Disaster was an Orc King who was manipulated into invading the Great Forest of Jura in an effort to artificially create a new Demon Lord. When Rimuru defeats and absorbs the Orc Disaster, the intrepid slime also agrees to take on the responsibility of looking after the Orcish people.

Charybdis – A Calamity-class monster resurrected by Phobio at the urging of the Moderate Harlequin Alliance, this flying creature seemed unstoppable when it challenged the combined forces of the Jura Tempest Federation and a contingent of pegasus riders on loan from Dwargon...that is, it seemed unstoppable until Demon Lord Milim took it out with a single hit. 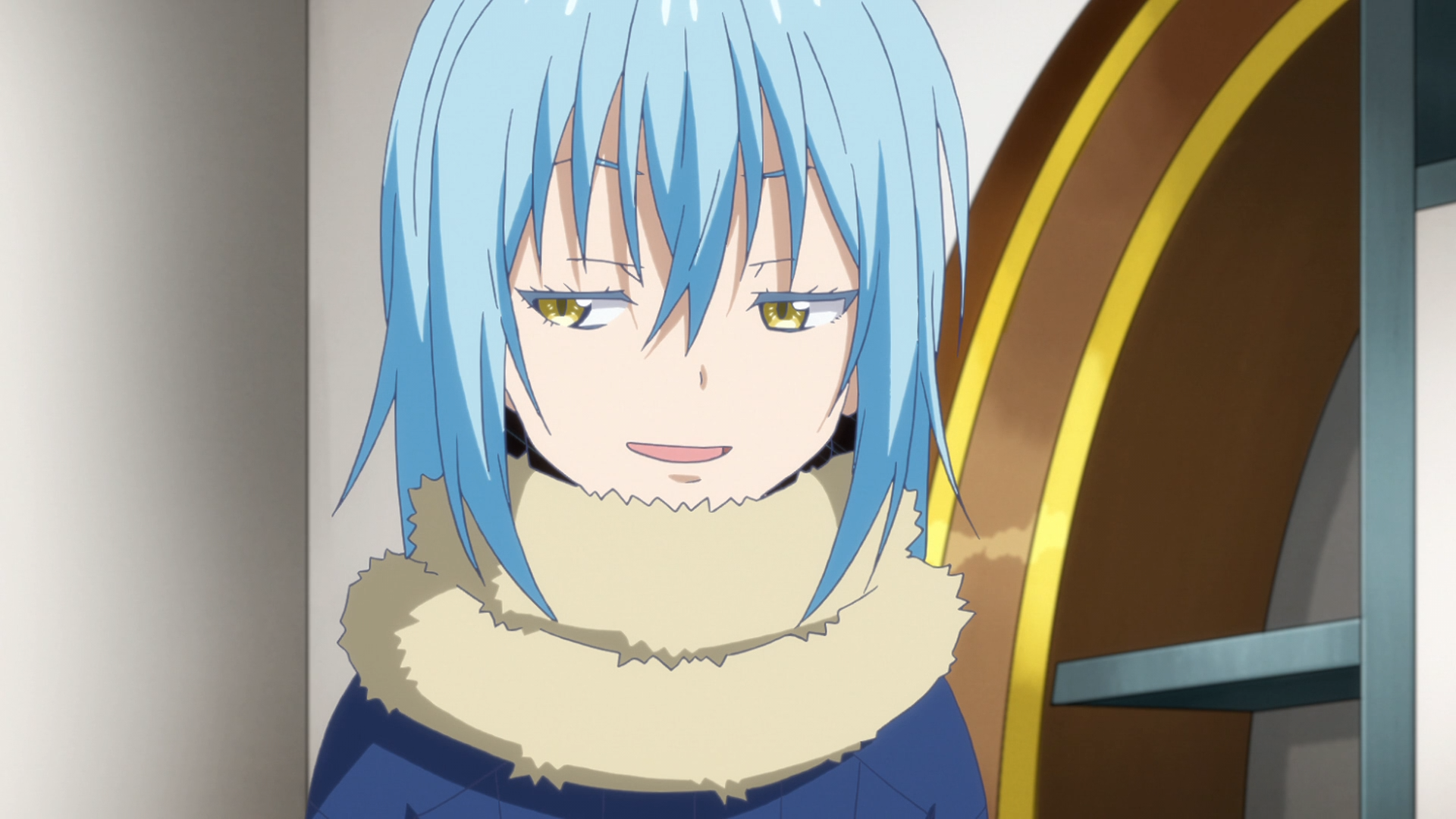 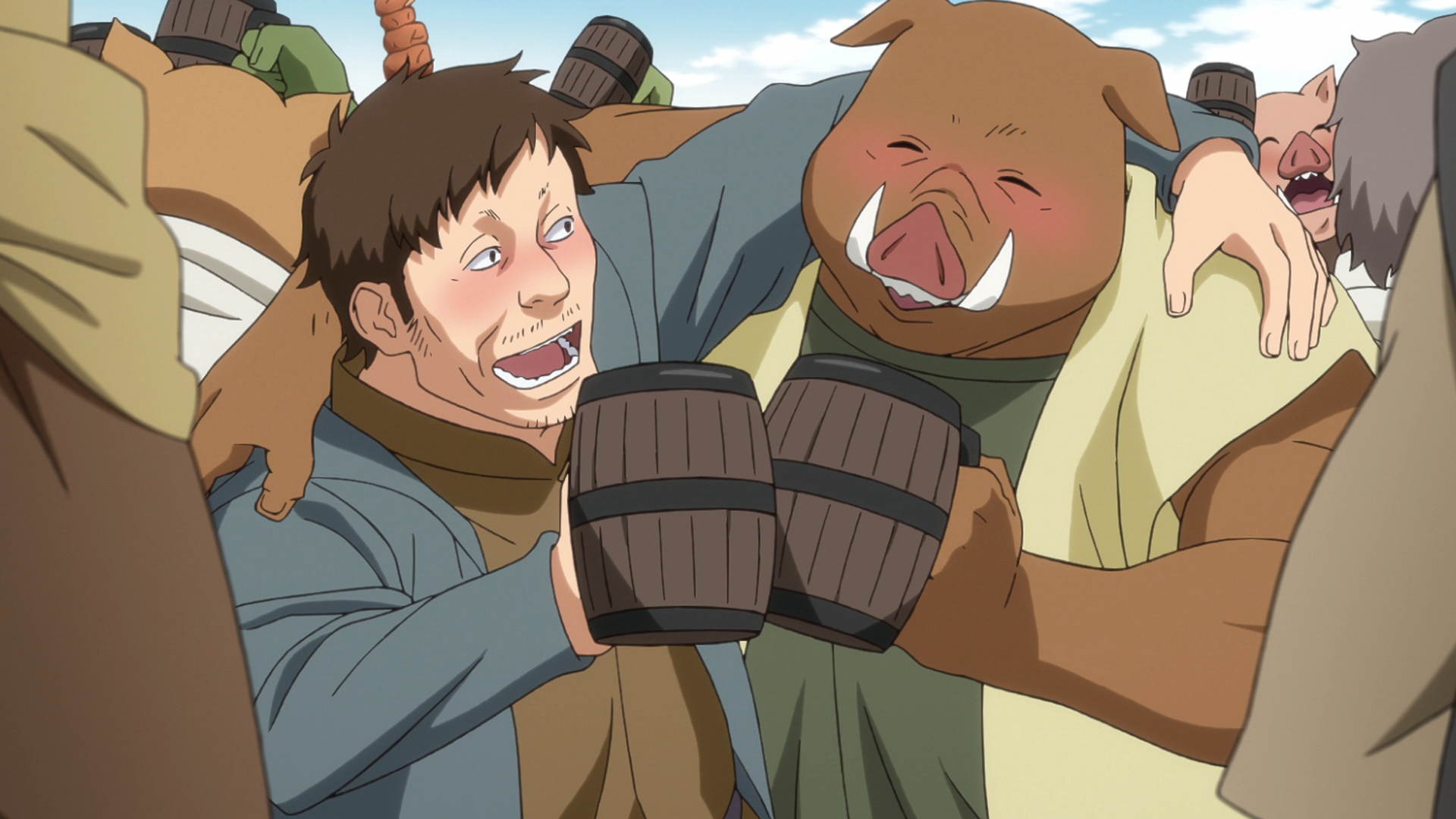 And there you have it, a primer for the first season of That Time I Got Reincarnated as a Slime that would make even Great Sage envious. In a genre full of angsty anti-heroes, Rimuru's cheerful nature, their humbleness and humility despite their overwhelming strength, and their desire to solve conflicts through cooperation and kindness are a welcome change of pace. We're happy to have a second helping soon!

Are you ready for another round of Rimuru gobbling up the competition and generally proving that they are “not a bad slime?” Be sure to let us know in the comment section below!

Tags
that time i got reincarnated as a slime, fuse, mitz vah, yasuhito kikuchi, atsushi nakayama, eight bit, fall 2018, april 2021
« Previous Post
The King of Fighters XV Shows Off Its Style Ahead of 2021 Launch
Next Post »
New Saiyuki TV Anime to Adapt Manga's 'Even a Worm' Arc
Other Top News
12 Comments
Sort by:

QUIZ: What Non-Unique Skill Would You Have in the Slime Universe?