FEATURE: What You Need To Know Before Dr. STONE Season 2

Get caught up before Season 2! 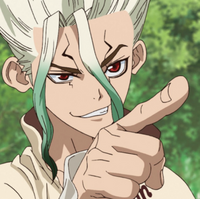 Science will always prevail, but how can it work in a world where technology has been lost to time? There’s a lot to take in, so here’s a recap for anyone who needs a refresher!

Spoilers for Dr. STONE Season 1 below.

A flash of mysterious light has petrified the modern world until 3,700 years later when Senku awakens. He intends to fully revive the world with the power of science, only to come to a head with the superhuman Tsukasa, who revives only those of his choosing to prevent corruption in the rebuilt society. Strength or science, who will win?

Senku finds some allies in the descendants of humanity, the inhabitants of the Ishigami Village, and with his mind at the helm, the village shoots through invention after invention with the power of science. In successfully winning the title of village chief through a tournament of brawn and wits, and successfully curing the priestess Ruri of her pneumonia, Senku comes to realize that the village isn’t all it seems. They are all, in fact, descendants of the only people in the past to escape the petrification ray from the modern world: the team of six international astronauts including Senku’s father, Ishigami Byakuya. Using the final piece that his father left him, Senku is ready to formulate a plan to stop Tsukasa in his tracks.

Dr. STONE focuses less on direct combat but on how science is able to progress from near-scratch. As a result, a lot of inventions aren’t just featured in how they can potentially be remade, but also in how they build off each other to make more complex ideas than previously seen in society. For example, harvesting iron and creating a lightning rod allows them to make electricity, which then leads to power generators and far in the future, lightbulbs. So far, science has recreated:

However, the all-important revival formula isn’t in Senku’s hands just yet, but is instead overseen by Tsukasa. That is the key to reviving the world fully, and the battle is brewing to see who controls it.

Ishigami village is now united under Senku, and thanks to his title as village chief, he is able to mobilize the village. Everyone is moved by the power of science, and it’s much easier to move as a single front rather than it being fractured into multiple pieces.

Senku: The master scientist with the knowledge and skills to recreate the modern world.

Chrome: One of humanity’s descendants who’s inherited the soul and passion for science.

Kaseki: An old craftsman of the village. Invaluable for making Senku’s creations come to life.

Of course, there isn’t any way to survive in the stone world without the use of force. On that end is:

Kohaku: A warrior woman, the strongest in Ishigami Village.

Kinro: One of the bridge guards. Now fully equipped with eyeglasses.

Ginro: The other bridge guard. Cowardly, but will do what’s right in a pinch.

Magma: Formerly an enemy, but has come to an understanding with Senku and Chrome.

Naturally, there are those who don’t fit into the above categories, but it’s hard to see the team without them.

Gen: A snakelike mentalist who knows exactly what to do or say to get people to move the way he wants. Formerly on Tsukasa’s side, but now has a strong bond with Senku and the team.

Suika: A young girl with her signature watermelon helmet. Quick on her feet, excellent as a scout.

Ruri: The priestess of Ishigami Village. Now cured of her sickness, she is the keeper of the Hundred Tales, the stories passed down from the modern world.

Tsukasa stated that he intends to rule the new world with force, and he means it. While Tsukasa doesn’t come off as dishonorable, he is certainly ruthless. Those he revives are loyal to his cause and have been handpicked by him for being the best at what they do. We don’t yet know the full capacities of the empire, but who we’ve seen so far has been trouble for sure.

Tsukasa: The warrior himself. Unmatched on the field.

Hyoga: A spear-wielding fighter with a cold-blooded side.

Homura: A gymnast and a spy. Loyal to Hyoga.

Last but not least, these two undercover in the empire currently, are loyal to Senku, but it has been over a year since they parted ways with Senku.

Taiju: Senku’s childhood friend. Not very smart, but has the endurance and heart to make up for it.

Yuzuriha: Taiju’s love interest. Good at crafts and quick on the uptake.

With the battle between two philosophies upcoming, there’s a lot to catch up with. One thing we know for certain: more inventions are surely on the horizon. Catch up on the first season here!

What are you excited for in the next season of Dr. STONE? Let us know in the comments!