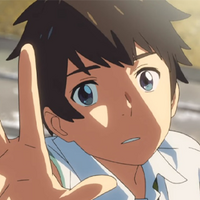 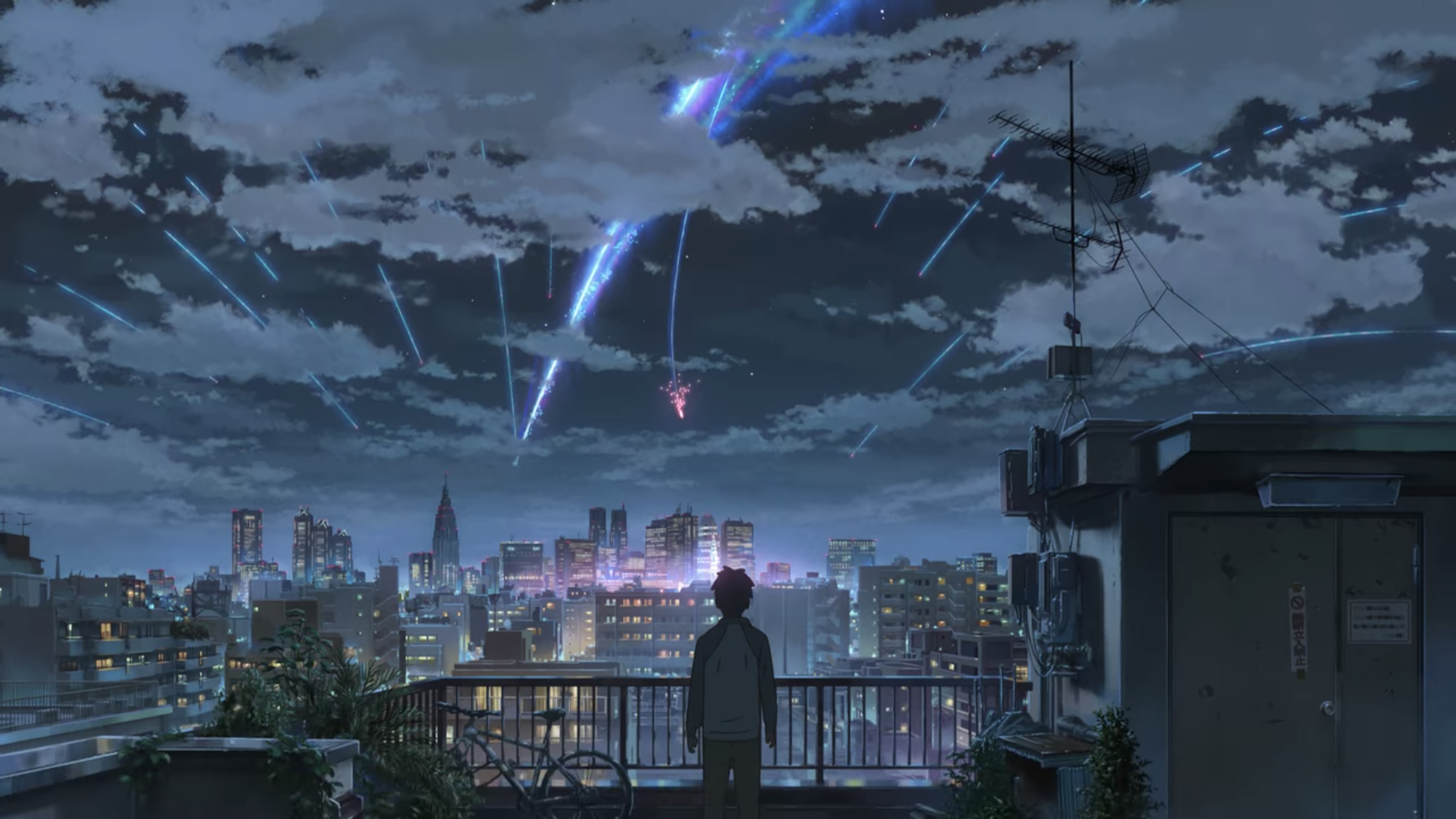 In a single moment, everything changed; after one great shake of the earth, the world was never the same again. Today marks the 10th anniversary of the 2011 Tohoku earthquake and tsunami, also known as 3.11 in Japan. At a magnitude of 9.0, it was the biggest earthquake to ever hit the island. The earthquake, and the subsequent tsunami that followed, also killed an estimated 15,899, injured 6,157, and was the most expensive natural disaster in history. The meltdown of the Fukushima Daini Nuclear Power Plant followed — rendering parts of Japan uninhabitable to this day — with many still unable to go back to their home even ten years on.

The shaking was felt all the way in Tokyo and beyond, leaving physical scars on the world’s biggest metropolitan area. This was nothing compared to the devastation seen in the prefectures of Miyagi, Fukushima, and Iwate. For those who lived through the event, whether that be in Tohoku or Tokyo, the feelings of that day have left psychological scars that have influenced their daily lives. 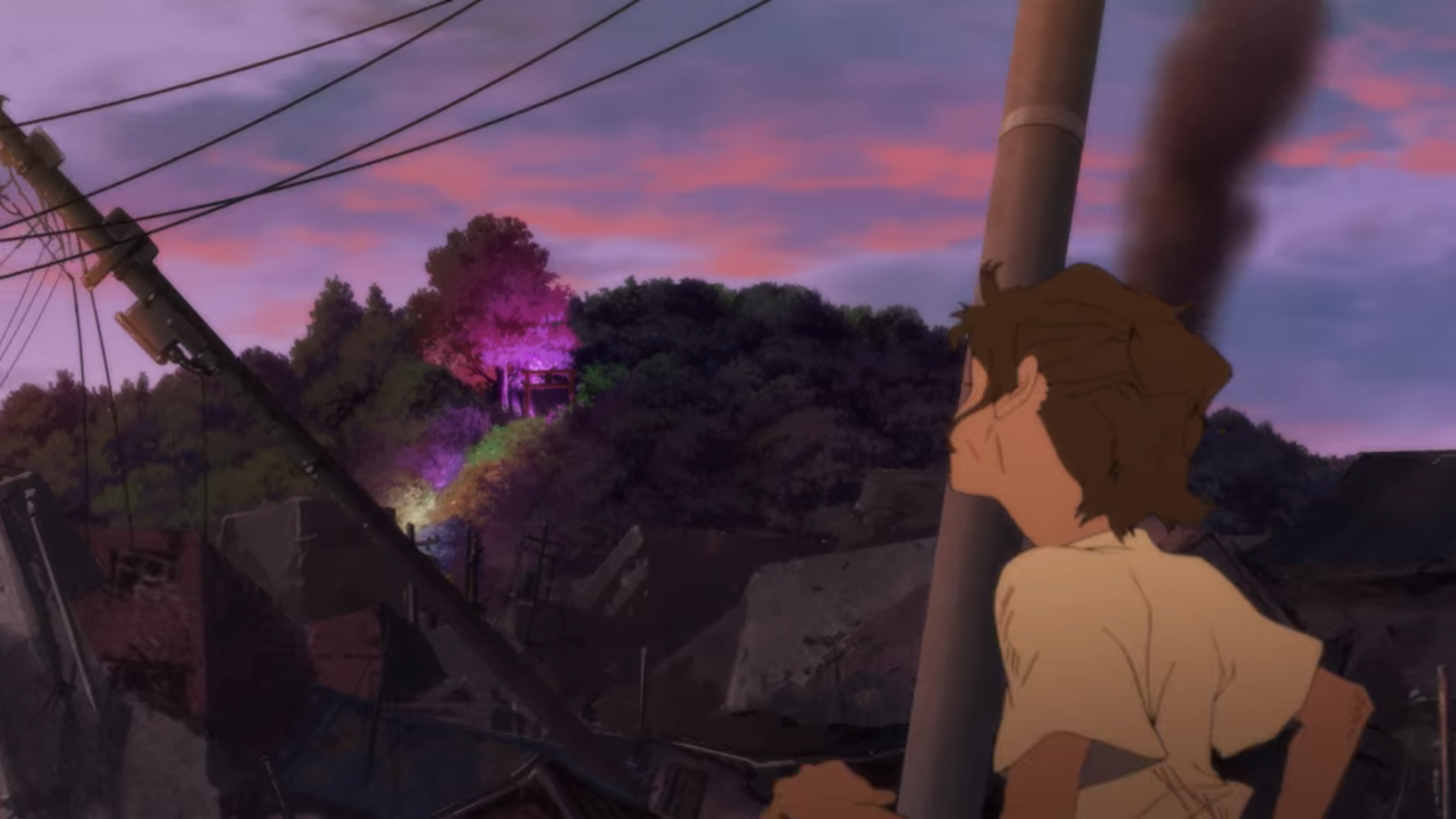 Aftershocks from the seismic event can still be felt even today: a magnitude 7.3 earthquake hit the region a little under a month ago, raising fears that another big quake could shake Japan at any time in the near future.

For creators living in Japan, these overwhelming emotions have manifested in their works. Creators such as Hayao Miyazaki, Masaaki Yuasa, Hideaki Anno, and Makoto Shinkai have internalized the events that transpired in their backyard and used 3.11 to help spread awareness, unravel some of the hanging threads, or even try and bring hope and happiness to fans. 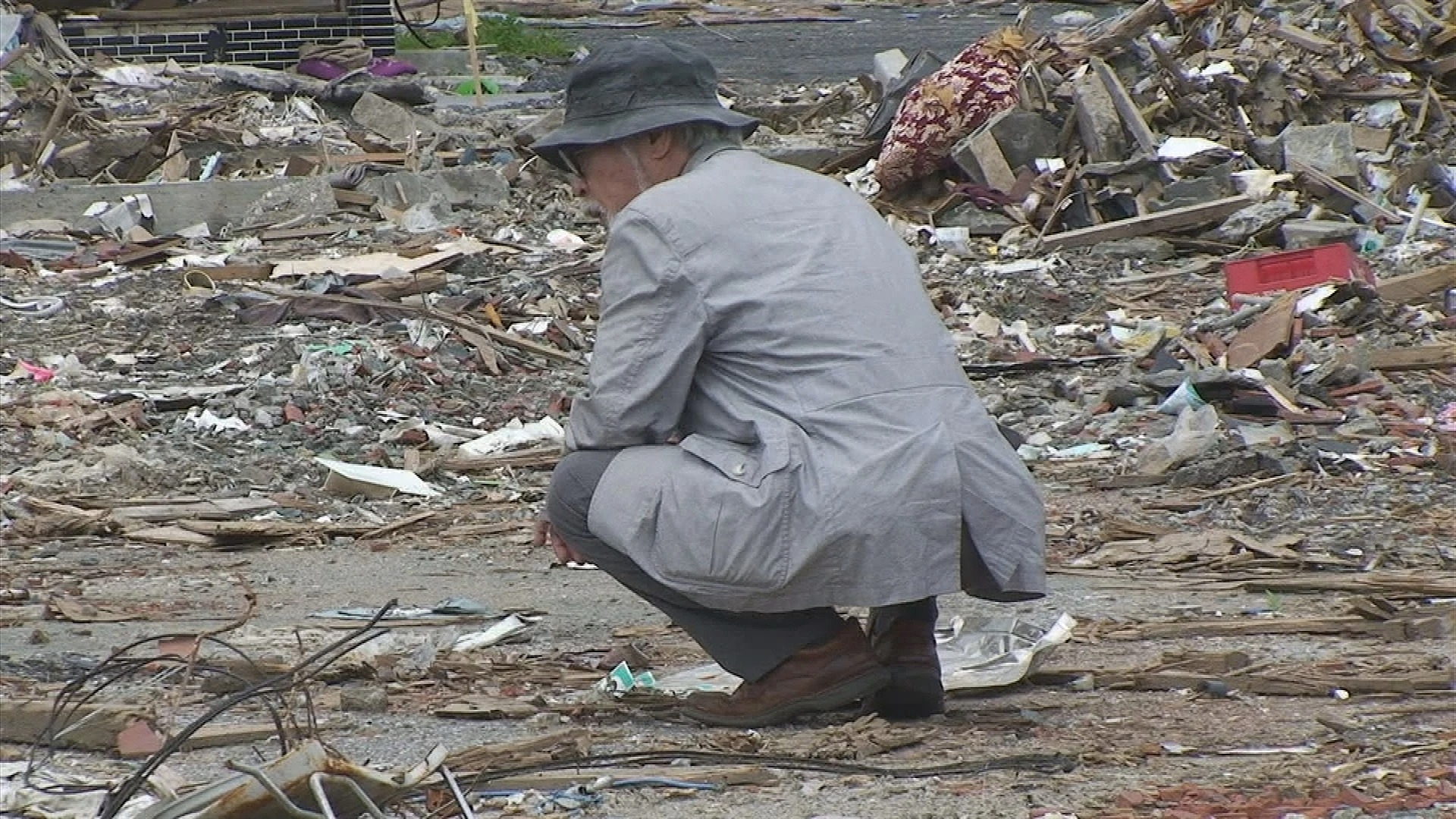 Hayao Miyazaki looking at the debris leftover from 3.11 in an NHK documentary

Hayao Miyazaki isn’t one to mince words and always just gets on with the job. A few weeks after 3.11, the Studio Ghibli director introduced his son’s latest work at the time, From Up on Poppy Hill. While Miyazaki tried to keep the press focused on the film, inevitably the topic of the tragedy from two weeks ago arose. Responding to why he felt it was okay to hold a press conference after the earthquake, Miyazaki spoke about his local bakery, explaining that “the old man at the bakery where I always buy dumplings and sweets has continued to make bread. That's why I think we should keep making movies.”

At the time, Miyazaki dismissed the thought that 3.11 would affect how he made his next work. But in a 2013 interview with Jiji upon the release of his then “final work” The Wind Rises, the director said the film “has not been affected by the earthquake or the nuclear accident. [The idea] was there from the beginning. I think that the times have caught up with us and overtaken us.” The Wind Rises contains a very realistic – almost chilling – interpretation of the 1923 Great Kanto earthquake.

The earthquake scene from The Wind Rises

For Japan Sinks 2020, Masaaki Yuasa used some of his own experiences to highlight how characters would be feeling in the moment. In multiple scenes, the main characters are left worrying about what is going on without a clear line of communication – in fact, sometimes getting misinformation from sources not fully aware of the situation.

Yuasa himself explained in an interview in AnimeAnime that he felt like he didn’t know what was the “correct information” when he felt the quake in Tokyo in 2011. As he looked for information online, he heard rumors that Tokyo was in imminent danger. He was scared. Reflecting, Yuasa knew in his “heart” that he wasn’t as scared as those in the Tohoku region, but was “horrified” by what he saw on the news. Yuasa used a lot of those emotions he felt at the time to aid in telling the Japan Sinks 2020 story. 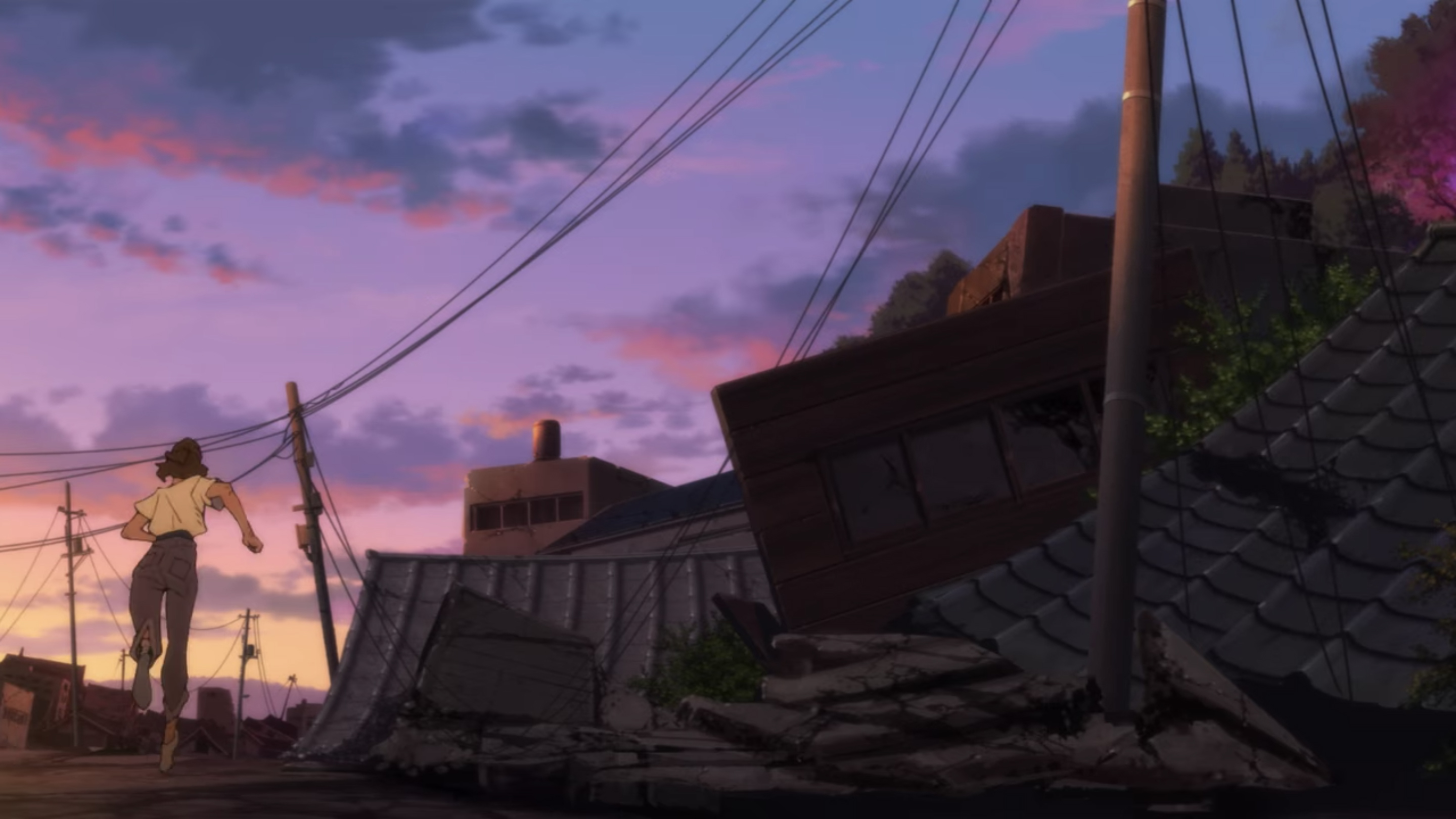 But it wasn’t just anime creators who were affected by 3.11. The 8th part of the JoJo's Bizarre Adventure manga series, JoJolion, debuted only a few months after the quake in 2011. Set in a town called Morioh (similar to the town in Diamond is Unbreakable), the location is based on manga creator Hirohiko Araki’s hometown of Sendai. The manga was being conceptualized when the earthquake occurred and Araki felt that he “couldn't avoid” touching on the subject in the series, he said in an Asashi Shimbun interview in 2014.

Araki’s family home, which had been around for 14 generations, was also swept away in the tsunami. He added that was shocked at the loss of his childhood home and felt that he should draw manga to bring entertainment to readers and fans.

Araki wasn’t the only manga creator to touch on the events of 3.11 in their long-running series. Tetsu Kariya’s long-running series Oshinbo touched on some controversial aspects of the aftermath of the tragedy, with one of the characters in the series suffering from a nosebleed after being in the town of Futaba – a town that is still not open to the public.

This caused an outcry with government officials on the national and prefectural level, with Prime Minister Shinzo Abe saying that “the government will make the best effort to take action against baseless rumors” in reference to the manga. These protests saw the collected volume version of the arc change some of the wording slightly as to “clarify the intention of what was said," and that "some of the characters' lines have been altered.” The series has been on hiatus after the arc ended two chapters later in May 2014. 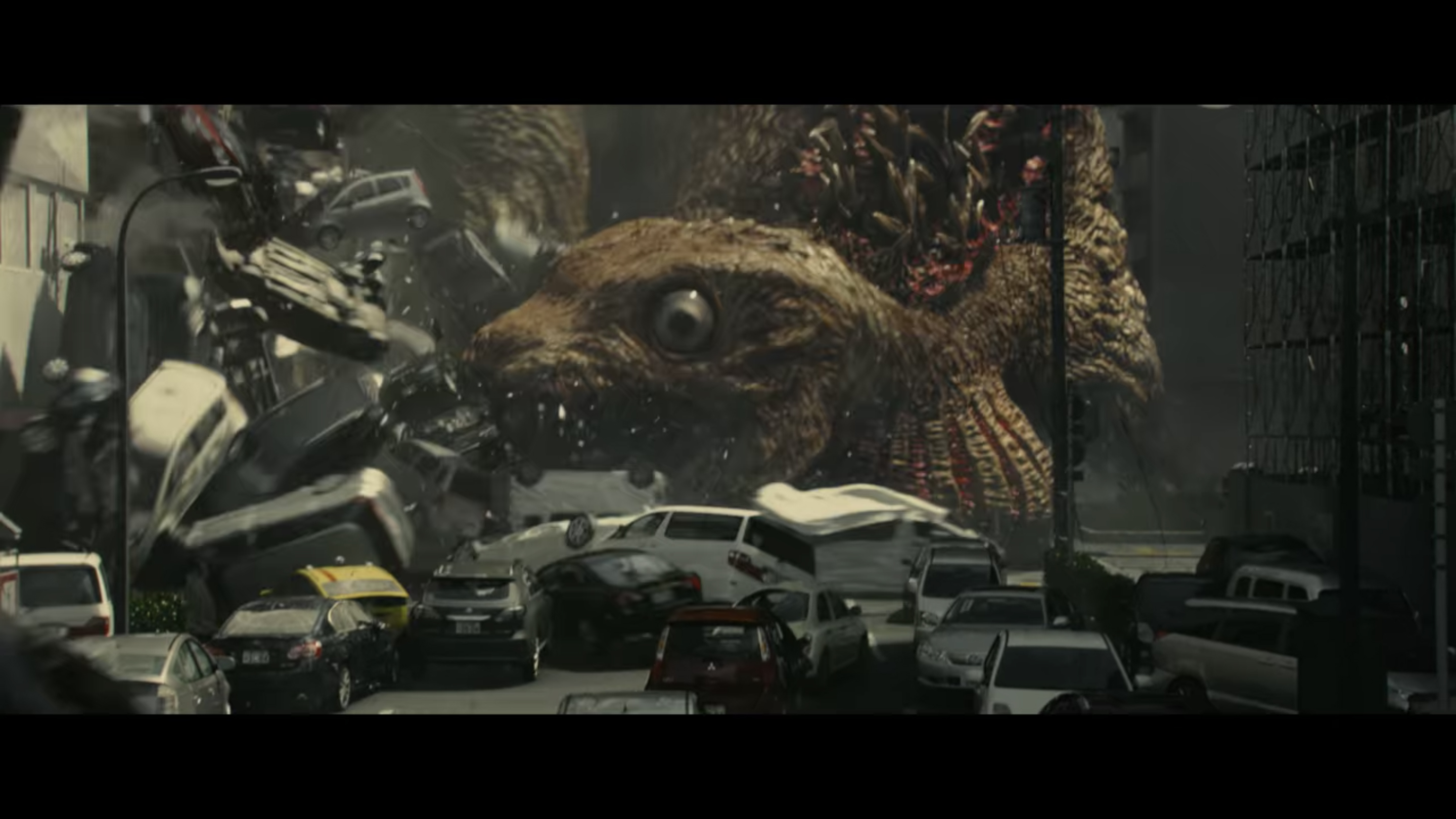 The Japanese government was also at the forefront of Hideaki Anno’s 2016 film Shin Godzilla, with many reviewers noting the similarities between the government in the film and what had occurred in the aftermath of 3.11. As Godzilla walks the neighborhoods of Kanagawa, waters rise, boats come ashore, and people are fleeing en-masse, meanwhile, the government is claiming that everything will be okay.

This sharp social satire of the events may be skin deep as the film goes on, but exposes the fact that Japan has a recent event that is very real and emotive to reference. Shin Godzilla Producer Akihiro Yamauchi explained in a 2016 Nippon.com interview that 3.11 “changed Japan more than anything else in the past 12 years.” He went on to say that the film had the option of “escaping into fantasy...but Anno-san and I talked it over and we both agreed that an approach like that would be meaningless.” 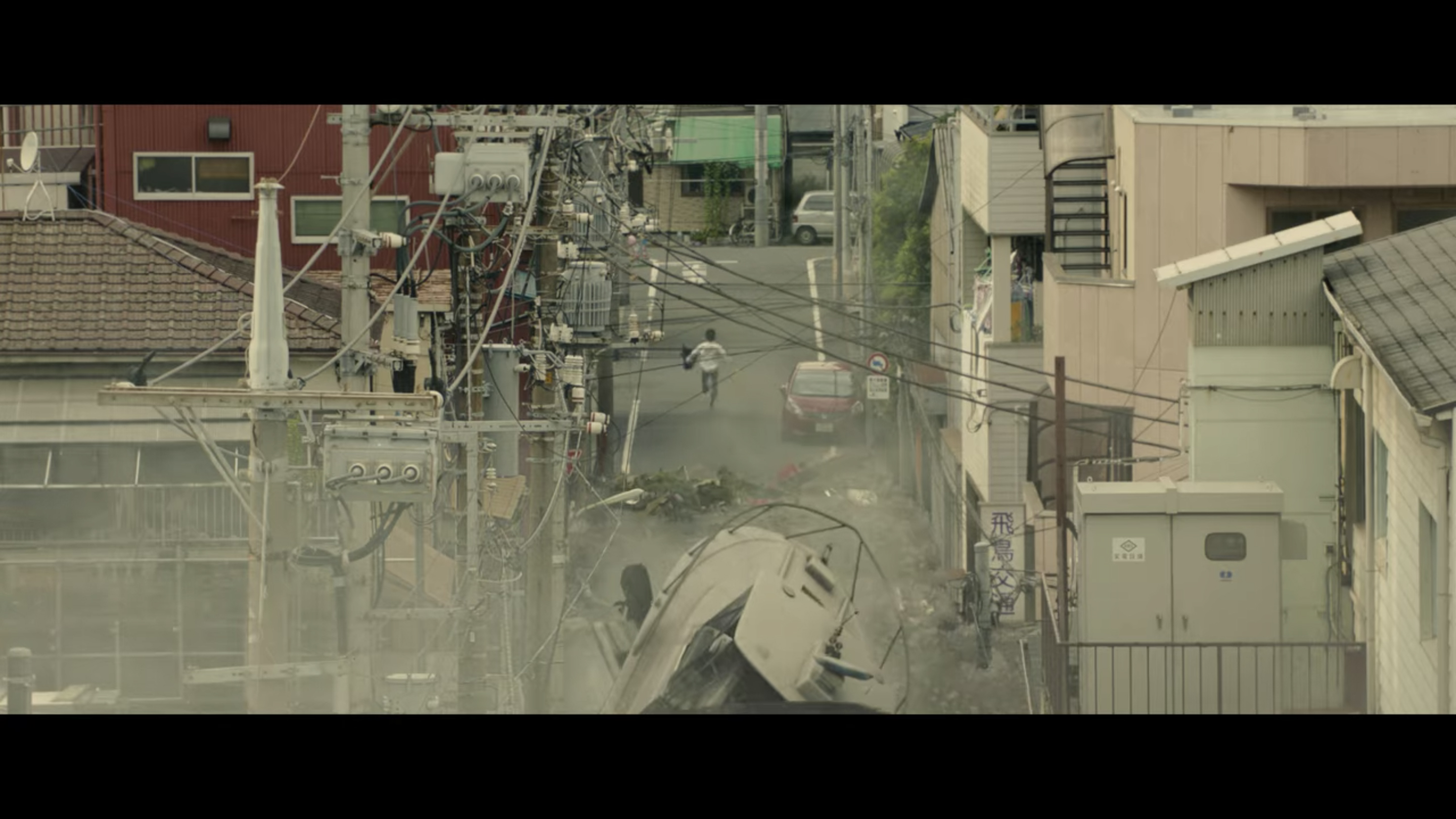 Makoto Shinkai’s 2016 movie Your Name, was directly influenced by the 2011 earthquake and the change in the psyche of the Japanese people. Taki, the male protagonist, at one moment in the movie says “You will never know when Tokyo could become like this,” vocalizing the fear that festers away in many people living in Japan.

Genki Kawamura, a producer on both Your Name and Weathering with You, explained at a discussion at the Aoyama Shachu think tank in 2019 that “Your Name is aware of the Great East Japan earthquake.” Shinkai later explained in a 2017 interview with Huffington Post Japan that the disaster aspect of Your Name is only the underlying layer of the film, and the film had to end the way it did for it to feel complete to both him and the audience.

In a 2018 Makoto Shinkai Exhibition in Sendai, the first prototype sketch drawn of Your Name by Shinkai was shown to the public. It depicted the area of Yuriage in Natori City, Miyagi prefecture, which was completely wiped out in the tsunami. The population of the area only had 30 minutes to evacuate before waters overtook the town. There weren’t many survivors. 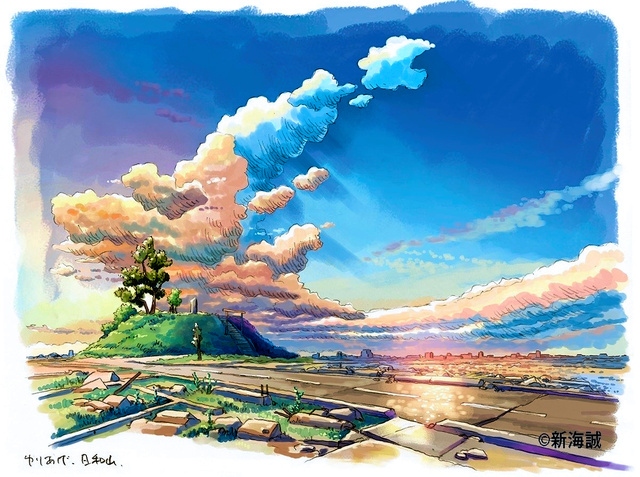 Shinkai visited the area of Yuriage in July 2011 and drew the sketch shortly after, which later became the springboard for what then became Your Name. He said solemnly in a TBS program “This could have been my town.”

Shinkai explained in the Huffington Post interview that 3.11 changed the way people in Japan thought about the world. "Before they’d think that “somehow...Japanese society will continue as it is," he said. "But since 2011, I think that idea has collapsed. The town does not remain a town forever.”

Because of this, Shinkai decided to focus on the little things that made up life: A late train, cutting up food, texting. Shinkai thought it was “necessary to draw meaning from the monotony of daily life.” Nowadays these beautifully crafted moments from Shinkai’s works are shared online as some sort of social media anime ASMR.

In the end, Shinkai’s main driving factor for the film was to make the audience “happy.” And it struck a chord with a wide audience, as the film would later go on to become the third highest-grossing anime film of all time worldwide. 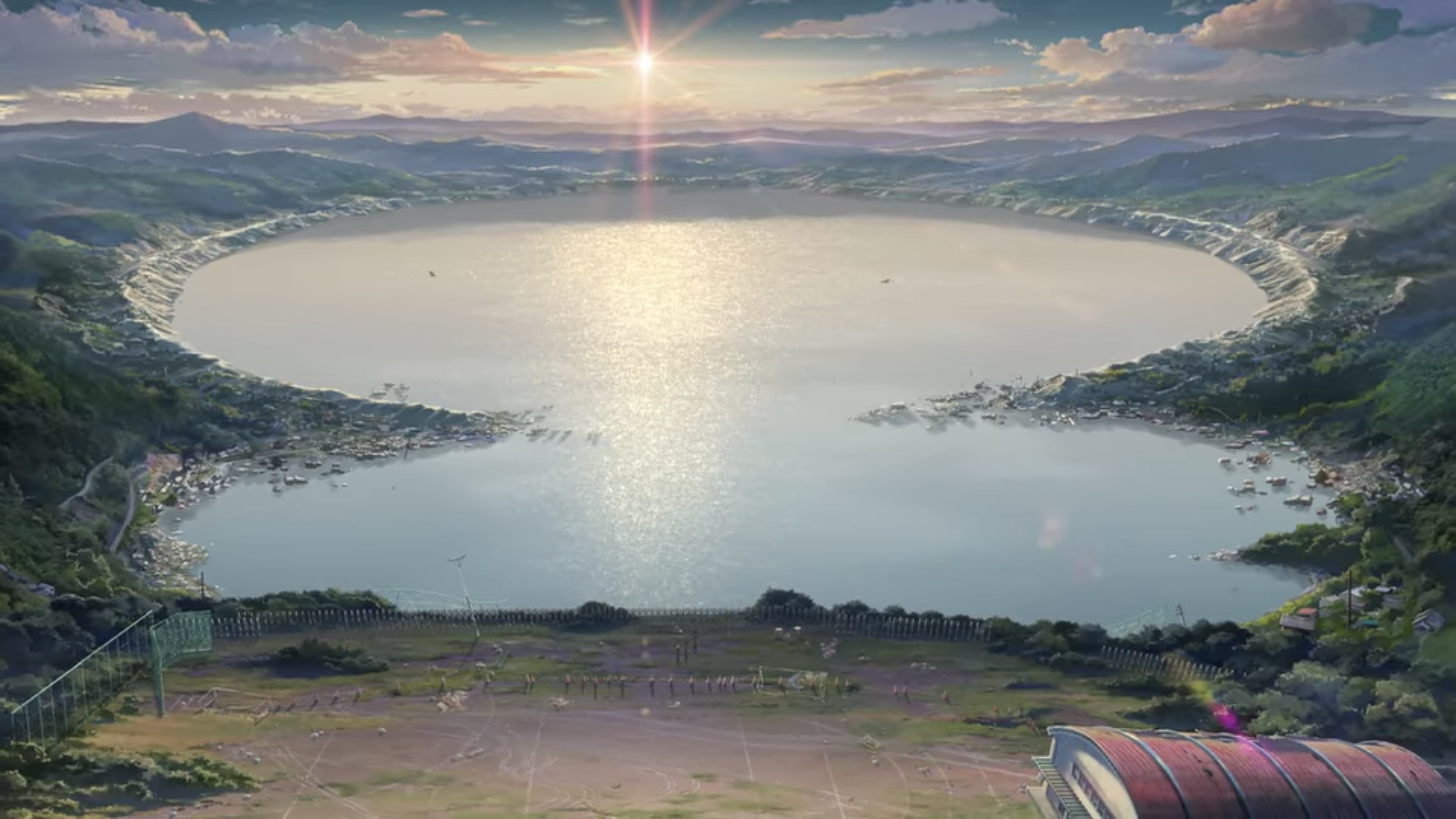 As we look back at how one event changed the world view of many, it’s good to know that despite the hardships faced in the unexpected, the desire to create and bring smiles to audiences perseveres. Many creators have used 3.11 as a chance to reflect, and it's only to be seen how the long tail of 3.11 continues to impact creators and their works.

The Tohoku region is still feeling the effects of the 2011 Tohoku earthquake and tsunami, with families torn apart and homes unable to be returned to. Japan NPO Center has a website set up with ways to donate to local charities and not-for-profit organizations within the Tohoku region that has been set up to serve affected communities.