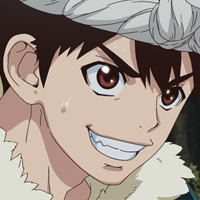 Dr. STONE was one of the most exciting new anime of 2019 and we’re right in the middle of the series’ second season! We were lucky enough to interview Animation Producer Shusuke Katagiri and talk about Chrome, anime production, and the joy of a project coming together. 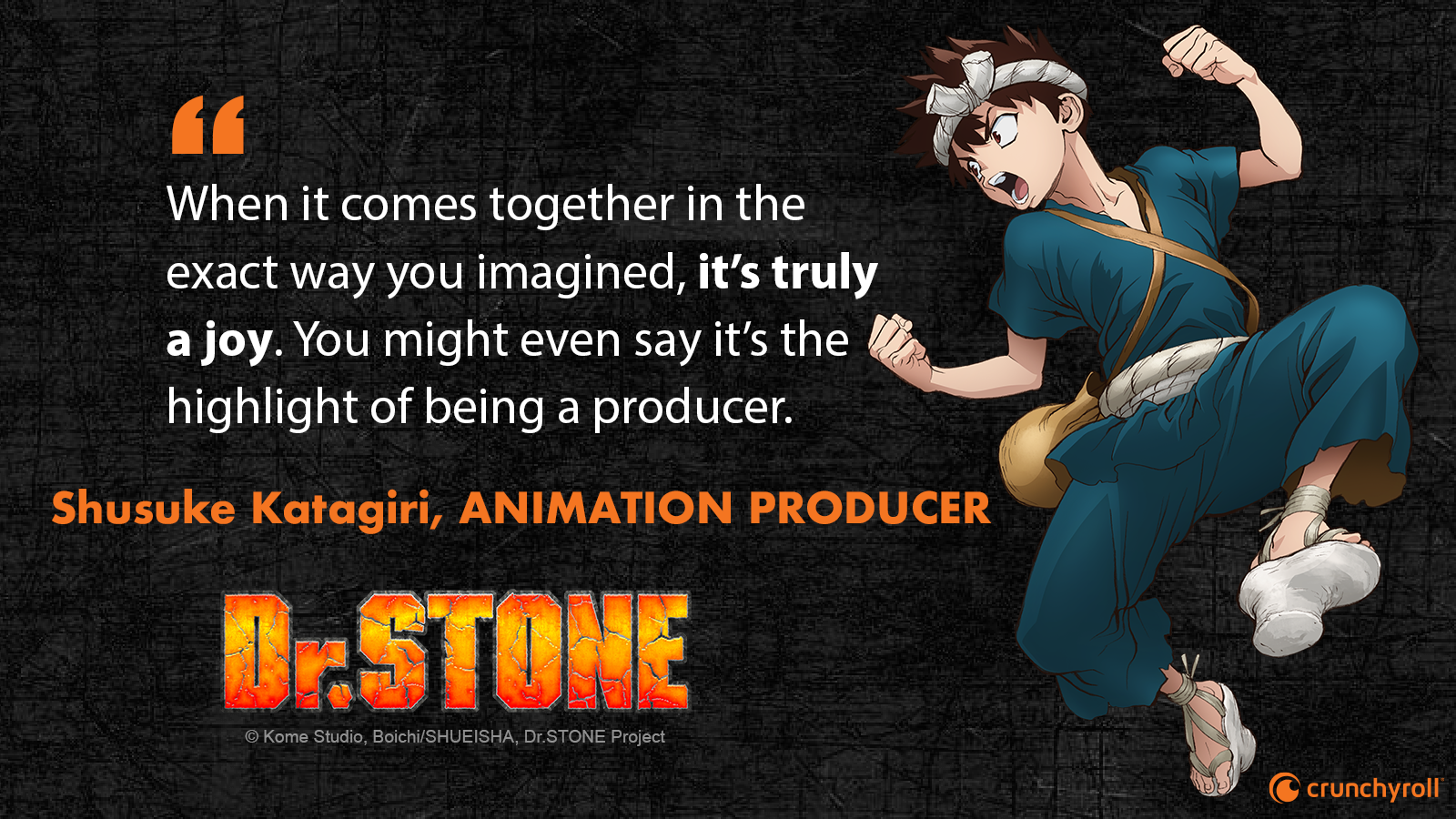 Crunchyroll: Anime producers have a unique role that touches many aspects of a series. Is there something about this position that appeals to you?

Shusuke Katagiri: Well when it comes to an adaptation, in order to make sure that the anime version is as good as possible, it requires selecting staff who are best suited for the material they would be working on. When it comes together in the exact way you imagined, it’s truly a joy. You might even say it’s the highlight of being a producer. That said, the opposite can also happen, which can be a real challenge to deal with. But even then, animation is a medium where you can’t really just redo things if there have been big mistakes, so being able to course correct in that fashion ends up being one of your duties as a producer.

As a producer, would you say that you get to exercise a creative voice, or is it mostly administrative in nature?

On occasion, yes, I do get to be creative. Time allowing, I do like to get a look at each cut. If I notice anything, I go to the people responsible and either tell them they did a great job or maybe give them advice for where they should be careful. When possible, I try to actually be involved in the creative process.

With so many different assignments, deadlines, and people whose work you need to look after, how do you manage all of those different tasks and maintain momentum for the project as a whole?

Well, it’s definitely a difficult thing to manage on your own. That’s why the leaders on each episode are managing things on an episode-to-episode basis, and then those project leaders are managed by myself and the people at the production desk, which allows for oversight of the project as a whole. Other than that, things like making a budget and working with the audio crew, and budgeting the entire project cover the majority of a producer’s job. 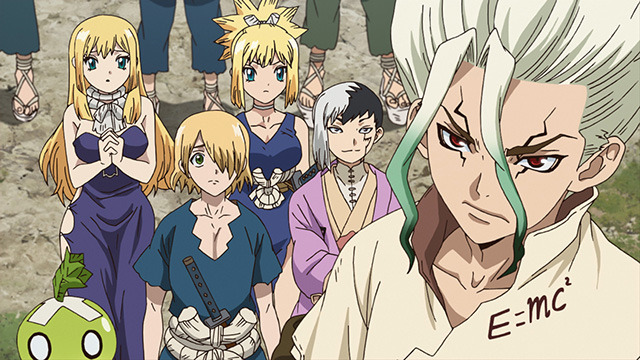 What about the world and characters of Dr. STONE made you most excited to return to the series?

I’m personally really excited about the new characters that debut in this season. “They finally get to be animated!” is something I keep thinking and looking forward to. The other thing, as the subtitle of the season suggests, is the Stone Wars. Seeing that conflict properly resolved is another thing I’m really pleased to see.

When I was talking with the director, Shinya Iino, he mentioned some science experiments he and the team conducted. I wanted to know if you joined them for any of those, and if so if you had any favorites?

Like the director mentioned, in preparation for production, we would check out real-world counterparts, checked their properties, like how they moved, and added them to our reference materials.. In terms of Season 2, so much of the science that gets deployed is on a much larger scale, and very dangerous as a result. There were a lot of cases where we chose not to try and replicate the experiments for safety reasons. But like he mentioned, there was an original crafting sequence in episode 1, and in order to make sure it worked for the anime, we visited a factory that is involved in the process in question in the real world. That helped us document our reference material to recreate that process in the world of animation.

I totally understand that–as the scale gets larger and larger, it becomes less practical to create those devices and run those experiments in real life.

Exactly. And for some of the items involved, even getting the chemicals necessary would require a license. But there are some cases that were fairly practical. For example, making paper, which seemed feasible in comparison. 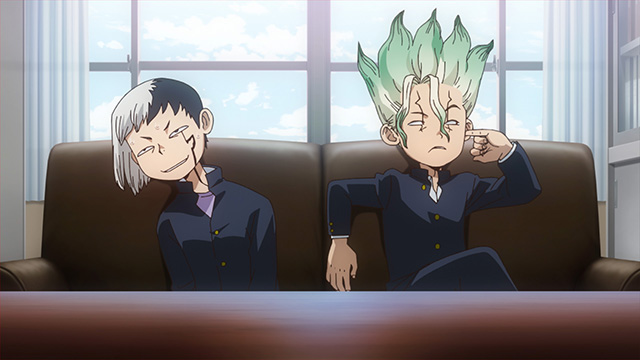 Dr. STONE has become relatively well-known in the West. Did you expect the global audience to respond so positively?

Not at all, no. It honestly still hasn’t sunk in. But I think, partially due to the COVID situation, there are a lot of people who watched it online, and because of that I’ve been encountering more and more people who have mentioned watching it. Slowly but surely, it’s dawning on me how popular it might have become.

I actually heard from a real-world physicist who thinks it really captures the thrill of science.

That’s really impressive! I think it shows that we made the right choice in trying to make sure the anime gives as authentic a depiction as possible. That’s good to hear.

How has your team adapted to the huge challenge of COVID?

Well, our director mentioned this, but the main thing is dividing the voice recordings into smaller groups of actors and having the recordings split up among those teams. On the production side, we’ve followed suit, splitting up into teams and making sure we rotate out in shifts based on certain amounts of times to try and minimize the risk of infection as much as possible. Another effect is that it’s resulted in much less time to meet with the production staff, so, to make up for that, we have to be much more conscientious about the amount of communication and coordination we have among the production staff. As a result of that, though, I think the team is a bit more tight-knit than before, which is an unexpected benefit.

How has Dr. STONE differed from other projects you’ve worked on? Has it been more challenging?

Well, with Dr. STONE, the big distinguishing feature has to be the way that science is depicted. The way we animate the crafting sequences is a major factor. I think that if we had done those without paying extra attention, it wouldn’t have been as convincing. That’s why we had to make sure to be very thorough in talking with technical consultants, and be very detail-oriented about our depictions.

I imagine a lot of other series don’t have that level of expertise from other fields to make sure everything is factually correct.

Definitely not. I can’t think of another anime that would. This is a trait the anime shares with the manga, I’d say.

People do really connect with the series deeply. What do you think it is about Dr. STONE that connects with them in such a unique way?

That's a tough one… Well, for instance, I believe the way that science is represented in the story comes across as distant at first, but is actually reflected in a lot of everyday things. I think that’s a part of it. For example, the way electricity is generated–there were episodes about that. It makes you think about how the power we casually consume is really being created. The anime and manga can make you think about things like that, which helps connect it to people’s actual lives. I think if this was a story that had come out when I was in elementary or middle school, I might have studied a little harder. I missed out! 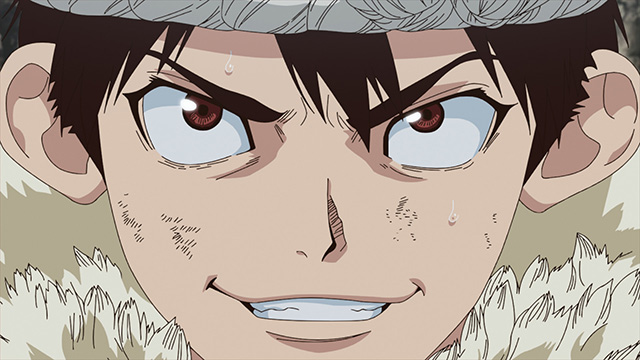 You have talked before about Chrome being your favorite character. Could you talk a bit about why he is?

Basically, I think it’s because we have a similar level of knowledge, so I can project onto Chrome pretty easily.  That makes it easy to put myself in his shoeshim. Because of that, I think that, when he’s shocked by the outlandish science that Senku puts on display, you’re reacting the same way. Getting to see how he grows and develops over the course of the anime is another thing that can be really moving. I’ve said this before, bur Dr. STONE can be seen as the story of Chrome’s personal growth.

When I see Chrome trying so hard, I look at him and think to myself, “if Chrome is trying so hard, then I can try hard to do things I don’t understand and do better, too.”

There’s a lot of characters in this story you want to root for, which is a big part of the fun. Suika is another example of that.

If there is one theme or feeling you hope viewers take away from Dr. STONE, what would it be?

In episode 22 of the first season, there’s a sequence where Senku, Chrome, and Magma go to excavate gems, and there’s a conversation between Senku and Magma when Senku says:

Even someone who’s got nothing going for them can come in useful someday. It doesn’t matter who’s the boss or who’s on top. There are all kinds of people. And that equals strength.

That’s what I would say is a good message to take home. Everyone is capable of something, and to make sure we all succeed as a team, you need to keep trying to do your best.

Is there anything you’d like to say to Western and global fans of Dr. STONE?

To everyone who watched Season 1, I think that Season 2 is the same sort of story you enjoyed, but powered up. For people who haven’t watched before, or are starting with Season 2, I think it’s turned out in a way you’ll be able to enjoy, too, so you can relax and start there. Then, if you find yourself enjoying Season 2, you can check out the first season, which I think will give you a deeper appreciation of the story. Times are tough at the moment, but if you’re able to watch the anime to get a bit of a boost from it, all of us who worked on Dr. STONE couldn’t be happier. 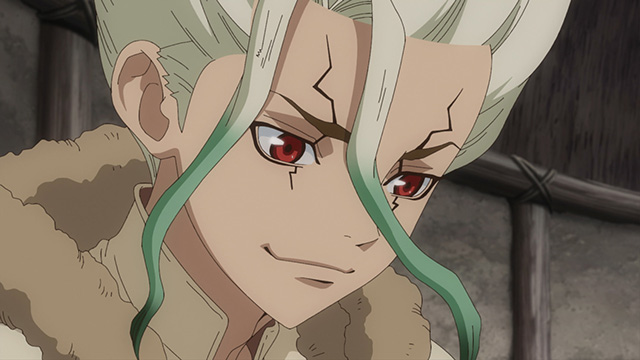