Come for the juice, stay for the LCL 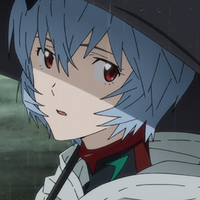 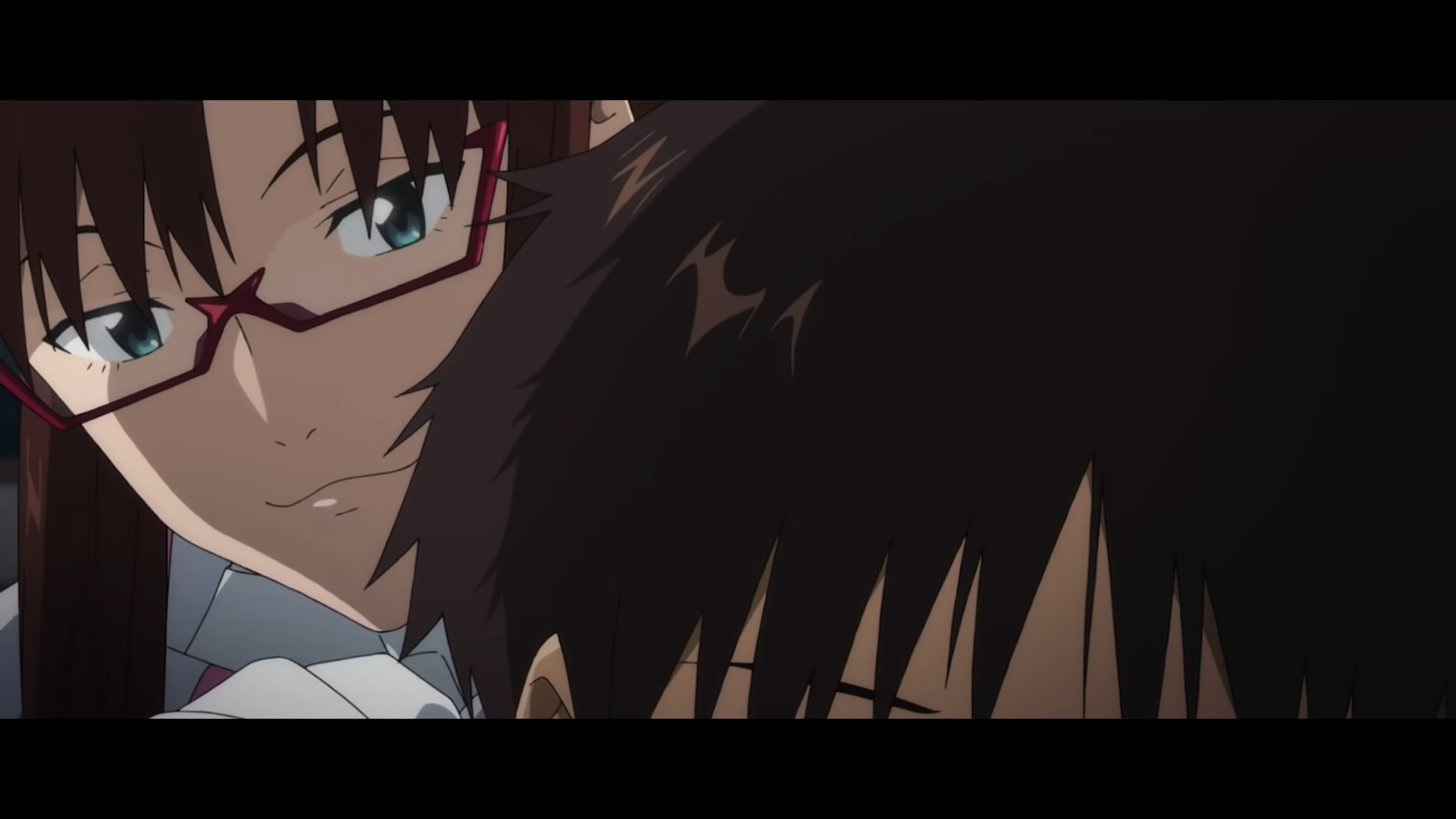 For those who are outside of Japan and want to know how the latest (and final) Evangelion film stacks up, we have already published our completely spoiler-free review. For those that want to know more, please read on.

After the airing of the NHK documentary which followed Hideaki Anno and the four-year production of Evangelion: 3.0+1.0 Thrice Upon a Time, the unofficial “spoiler ban” was lifted by Studio Khara on March 22. This means, as much as Khara is concerned, we are free to discuss anything and everything Evangelion: 3.0+1.0, like how [omitted for spoilers] kills [spoilers] and LCL [spoilers].

Seriously though, if you don’t want to read any spoilers for Evangelion: 3.0+1.0, then leave. Immediately. Close the tab, don’t scroll down.

This is a warning. 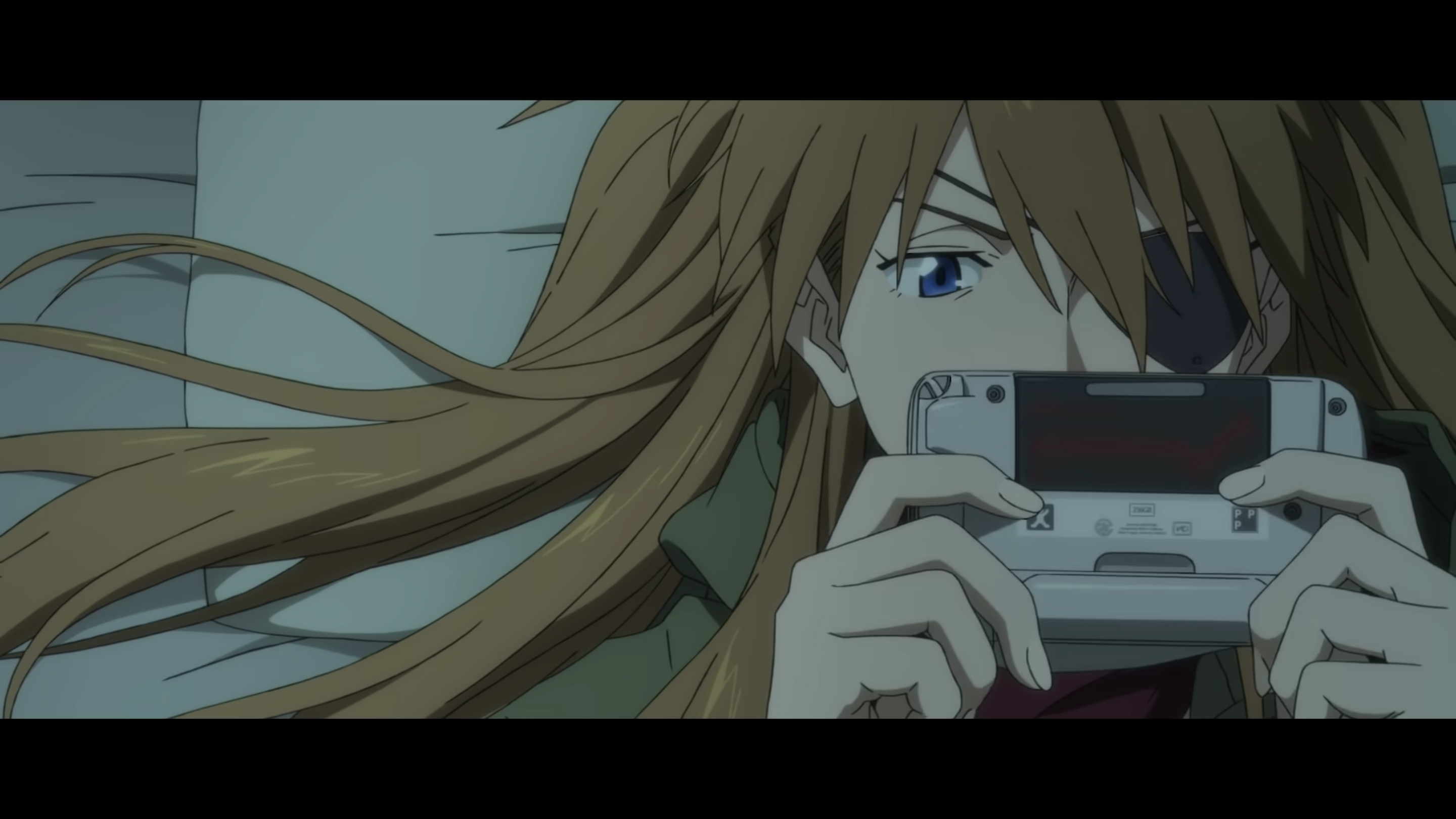 I’m putting an image here as a buffer. It's sweet right? 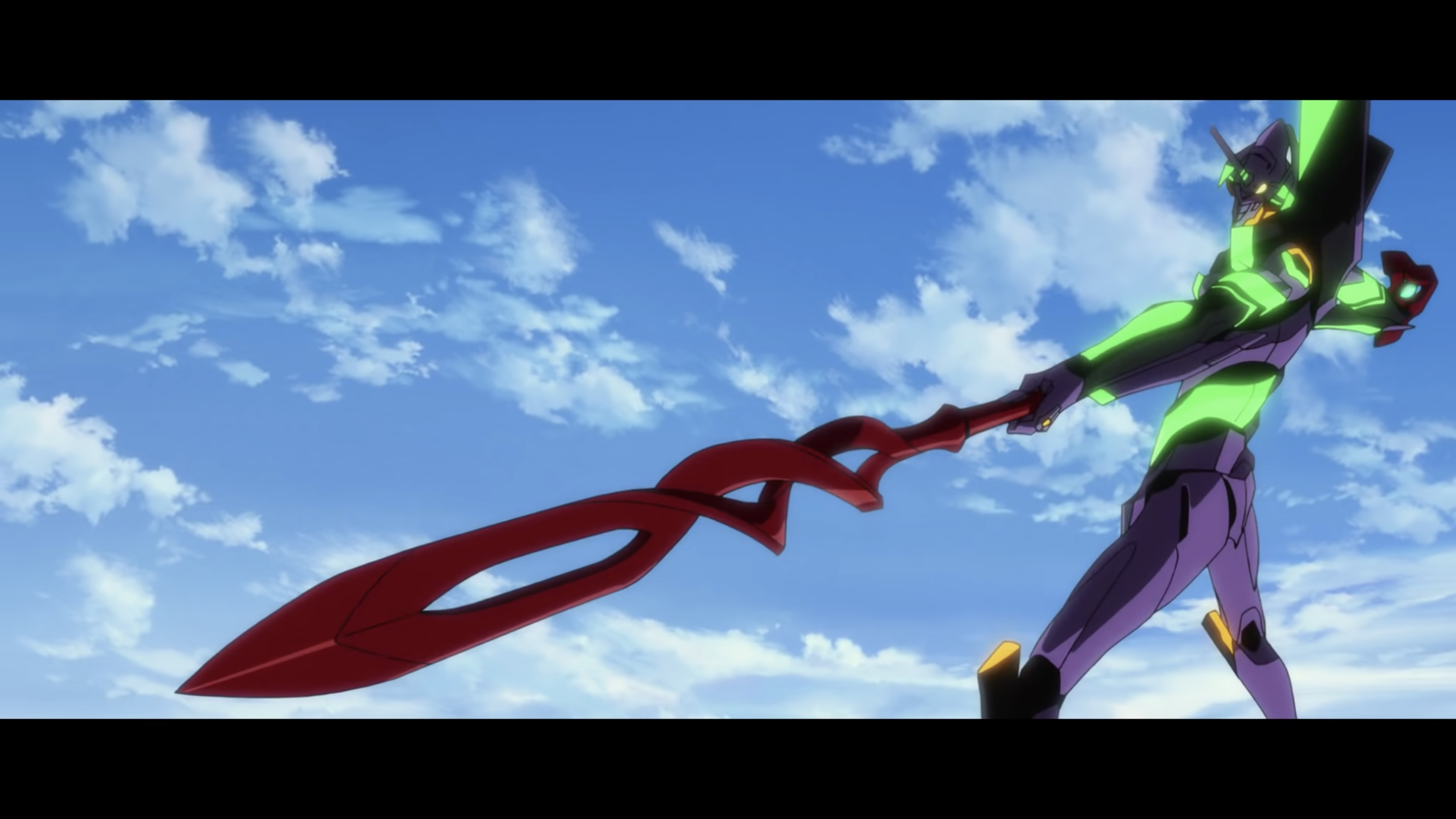 If you scroll past the next image you will be spoiled for everything in the film.
This is your last warning. 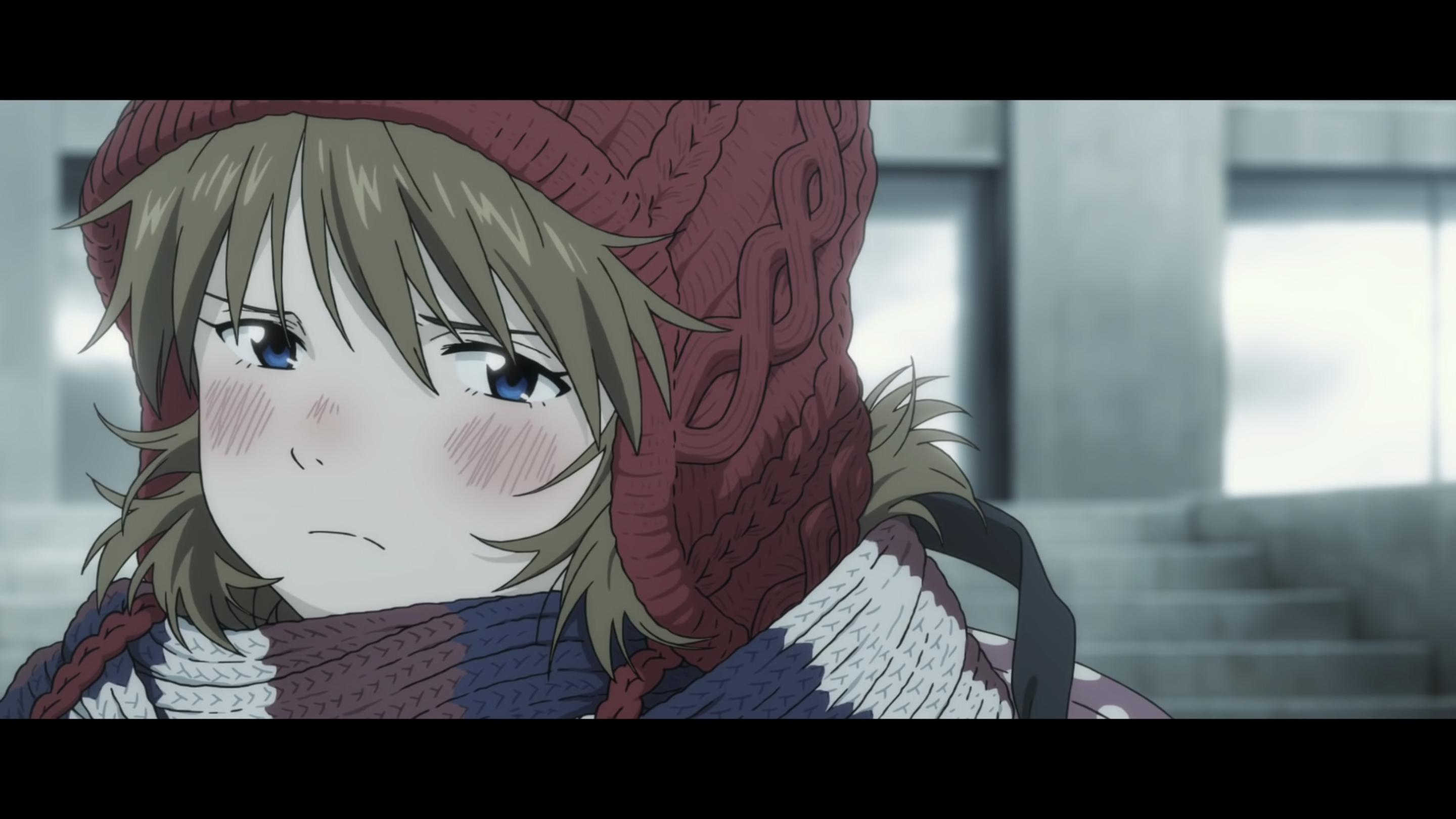 Welcome to Evangelion: 3.0+1.0 Thrice Upon a Time where I may have lied in my previous review, cause things go tumbling down — but in a good way. You’ll have to forgive me if I don’t recall the exact right terminology here on out: between the Doors of Guf, the hundreds of Evangelion models and ships we see, and that ending, it’s hard to keep it all in one head. That’s why this film has four directors.

If you’re already here, you’ve probably read the synopsis going around the internet right now. Yes, it explains what happens on screen, but experiencing it is a different story. Evangelion 3.0+1.0 takes a lot of cues from The End of Evangelion in its final act, but prior to that it is mostly a story of growth for Shinji, where he rejects being depressed (after a heart to heart with black-suit Rei, who then turns into LCL), learns that things aren’t 100% his fault. Shinji goes on to tackle his source of depression head-on; owning up to his past mistakes and taking down his father, who is now literally just a vessel of his own desires. 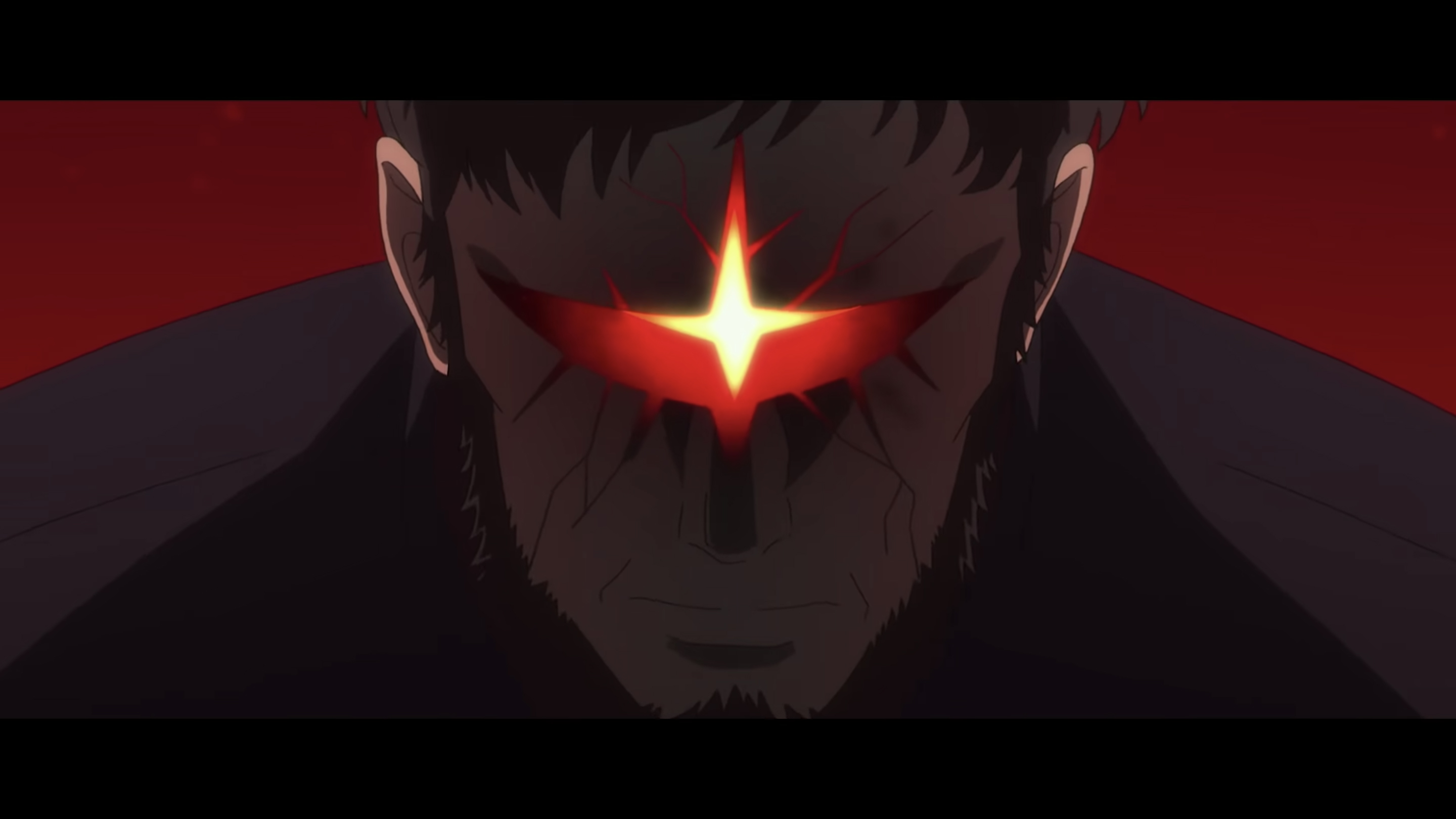 Something truly missing from Evangelion 3.0, and one of the reasons I loved Evangelion 2.22, was just the gang hanging out together and interacting with the — very scarred — world around them. That scar has vastly grown throughout the 14 years Shinji was missing from the actual 3rd impact (the one at the end of 2.22 was a “near-impact event”) which saw the world covered in the red haze we saw in 3.0. Luckily, WILLE has purification pods that keep the core-ification of the world at bay. We saw that being used in the 12-minute preview, but throughout the film, they’re used extensively to keep the Evangelion wandering the landscapes on the red earth away from the villages that are helping the WILLE cause. They need to get food from somewhere.

This is where we spend a lot of time learning how the characters from Shinji’s class all survived, got paired off, and that Asuka is staying (and is probably in love) with Kensuke. She confesses to Shinji that she loved him when they were kids, but 28-year-old Asuka can’t keep loving someone who hasn’t changed in 14 years. Shinji does accept the confession, saying to her that he loved her too, and she turns into LCL — though that’s in the Anti-Universe and after Asuka meets the “original” Asuka (I’ll get into that). As I said, it’s The End of Evangelion 2.0. 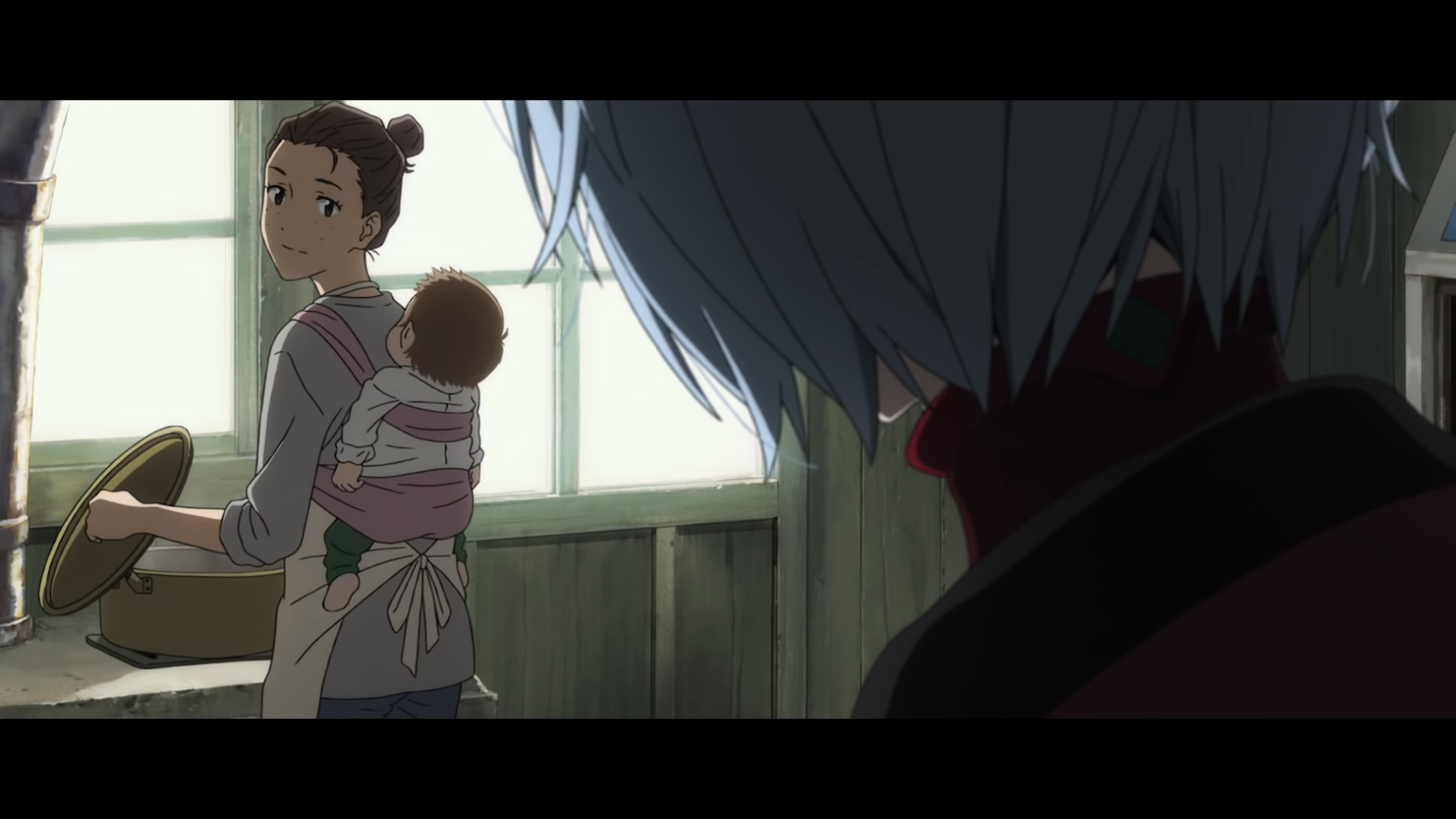 Rei discovering herself in the village

One of the nicest parts of the film is black-suit Rei discovering human emotion and society in the village. Being a clone that likely spent all of her time locked in her room (and without the love of the now inhuman Gendo, which original Rei got), it was unlikely that she learned anything that makes humans human. The concept of “hello” and babies from Toji and Hikari confuses her as she finds a place herself in this village. Admittedly, it was sad to see her go and turn into LCL (from a lack of LCL exposure), but serving as the catalyst for Shinji to get over himself and face his demons was worth it … I guess?

After this, Shinji grows up. Even Mari on a re-introductory sniff claims as much. During his time in the village, he discovers how the settlement stays afloat and that the 14-year-old son of Misato and Kaji (the latter perished in the real 3rd impact) helps keep the village alive. A picture of Shinji and Kaji Jr. helps warm Misato’s chilled heart and gives her the confidence to let Shinji pilot Unit 01 again, much to the disdain of multiple members of the WILLE crew.

All of this is nice. Unlike the despair and hopelessness felt in 3.0, the entire first three parts of the film are uplifting and bring moments of joy. Seeing black-suit Rei smile as she came to terms with herself was just utterly beautiful.

Then Shinji decides to get in the robot. 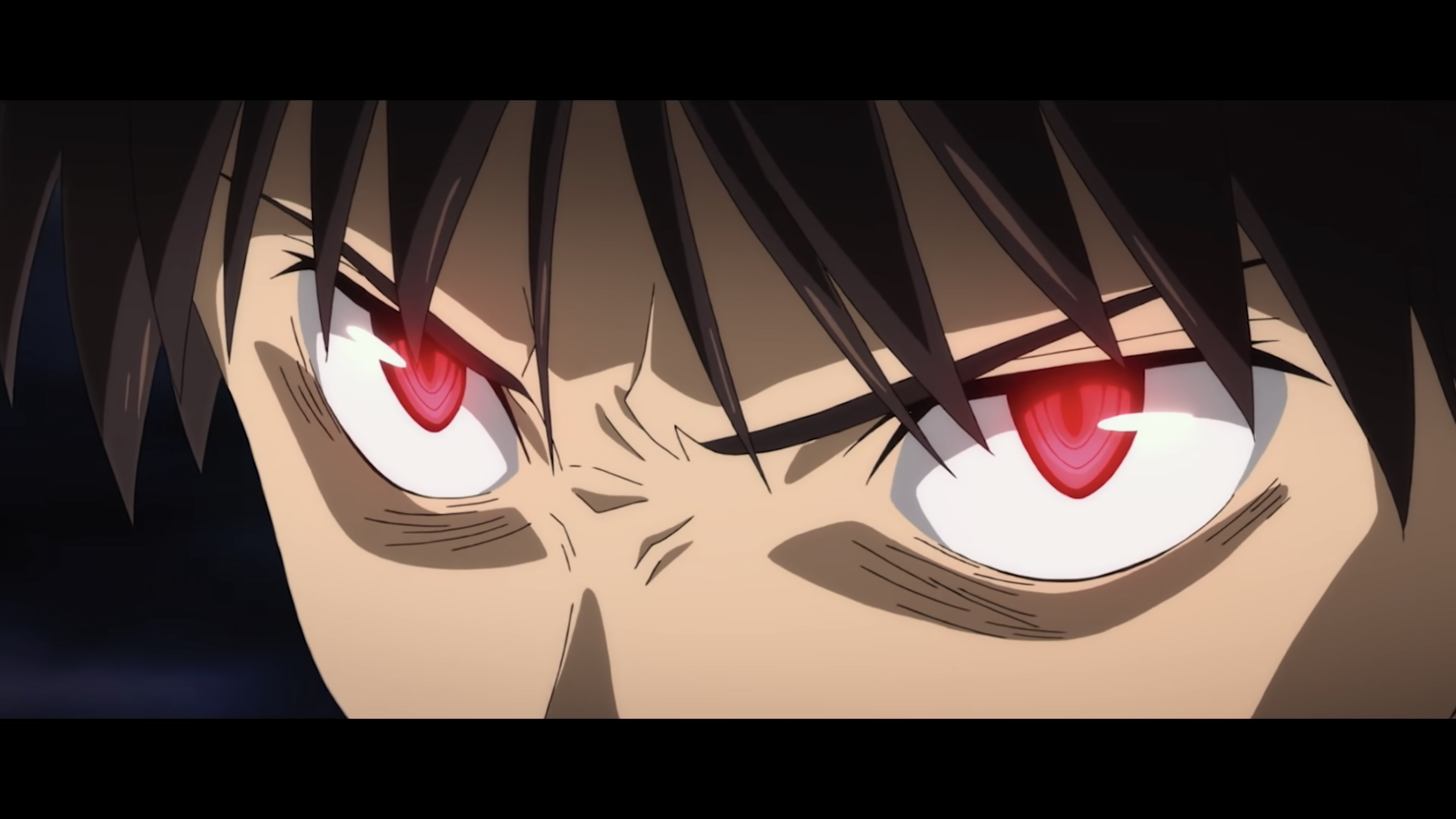 This is where I’m going to get into the Hideaki Anno talk, because this film, as well as the rest of the anime versions of the Evangelion franchise up to this point, is basically just a self-examination of the man’s mental state. In the spoiler-free review, I called Evangelion: 3.0+1.0 the antithesis of Evangelion: 3.0. And that’s true, but it is also an antithesis to The End of Evangelion: A rejection of the depression Anno felt while creating the 20-plus-year-old film. There’s no doubt in my mind that the journey of Shinji through these Rebuild films is the journey of Anno creating Evangelion, with 3.0 being the lowest point.

But this isn’t just felt in the story of 3.0+1.0, it’s also felt in the way it was presented. The entire final act of the film is basically a happier version of the “tumbling down” scene from The End of Evangelion, just with some more interesting aspects to it along with some inventive filmmaking — including making Lillith’s face live-action. That was haunting.

This includes the above scene, which got a lot of flak on social media for being very poorly animated when it appeared in a trailer. Even I was confused over the inclusion of such poor animation in what is one of the most hyped anime films of all time. Funnily enough, it was Anno trolling. The scene comes from the ending, where the two Eva’s fight through the history of Evangelion, with this scene either representing a testing stage for CGI or one of the many Evangelion video games. The poor animation makes sense in the film … mostly.

Over multiple film-like sets, the two Evangelions duke it out — one with Shinji, the other Gendo — over their ideals. This takes them to Misato’s apartment, the school, and even where Pen-Pen (or his offspring, I don’t know how long Penguins live) resides in 3.0+1.0. Before cutting to each of the different scenes, an Eva smashes through the set wall and onto a production stage.

I also said in the spoiler-free review that Anno “takes everything he knows about animation and filmmaking to deliver the perfect end to Evangelion,” and it shows when you see the (animated) production stage filled with props, miniature cities, and controls that you’d probably see on a production stage for a live-action Evangelion. Again though, this part is animated. 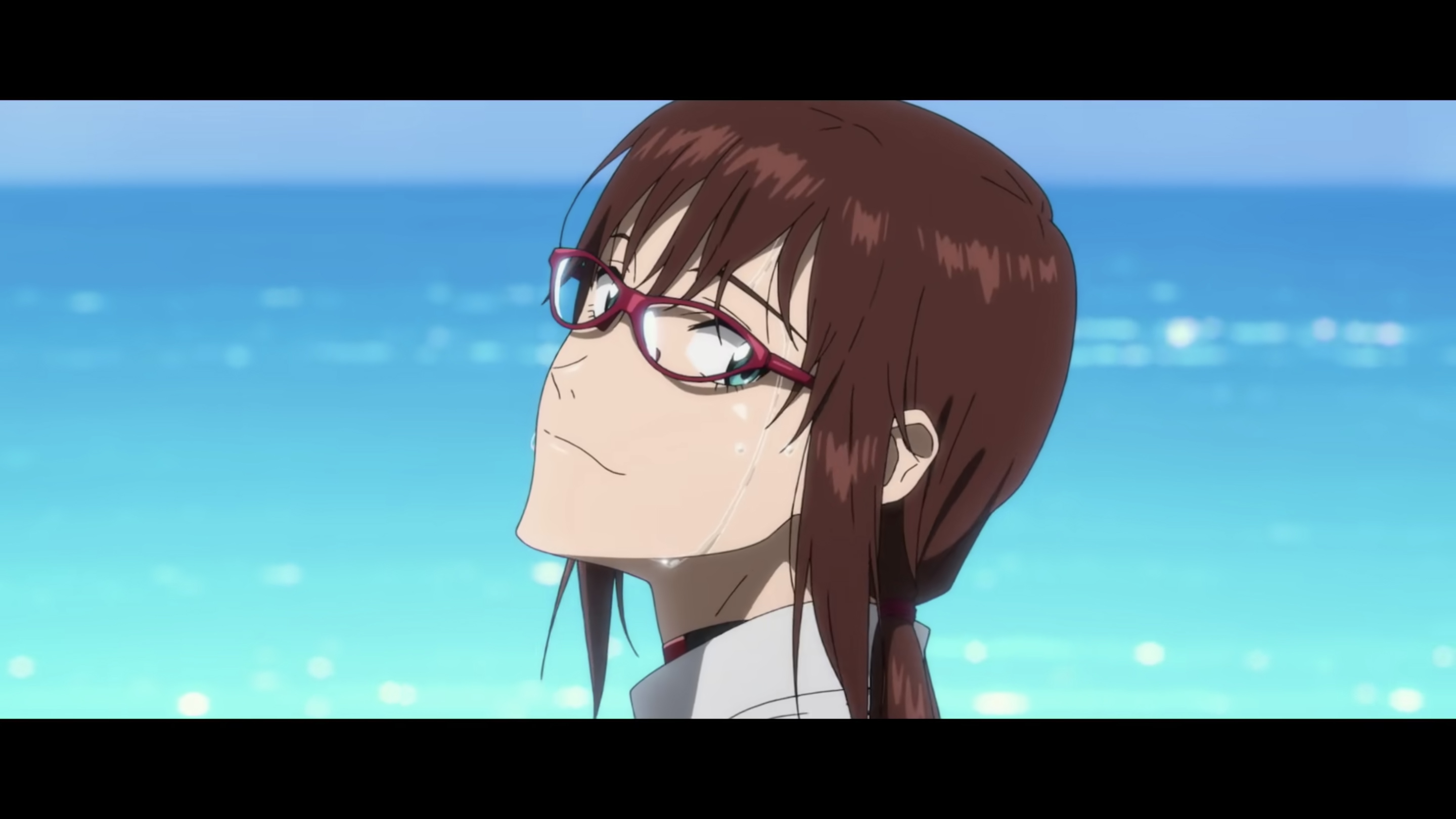 Mari at the End

The surrealness doesn’t end here. When Shinji “wins” and chooses to reset the world without Evangelion, the animation breaks. Shinji devolves into key animation, then layouts, then into a storyboard, which is then broken by Mari bringing color back into Shinji’s world on that beach. No “how disgusting” here, only happiness.

The film ends with an adult Mari and an adult Shinji at Ube Station. As the music of Hikaru Utada’s “One Last Kiss” swelled up through the speakers, the animated backgrounds slowly transitioned into a live-action drone shot of the area surrounding the hometown of Hideaki Anno.

A poster for Evangelion: 3.0+1.0 showing Shinji on the tracks outside Ube Station, which I discussed when the poster was first released.

This is how I know Hideaki Anno is done with Evangelion. While yes, he has said he is done and feels no personal connection to the franchise anymore, the end of the film is a deeply personal one that clearly shows the anime creator cares about his creation and is now happy enough to see leave home and become its own thing — if anyone else chooses to pick it up.

Shin Evangelion (the Japanese name for the film) is the true form of Evangelion that Anno set out to create over 25 years ago. While it wouldn’t have looked anything like it does now, the emotion poured into one of the longest animated films ever made makes that point as clear as the bright blue sea.

Some other various interesting spoiler points: 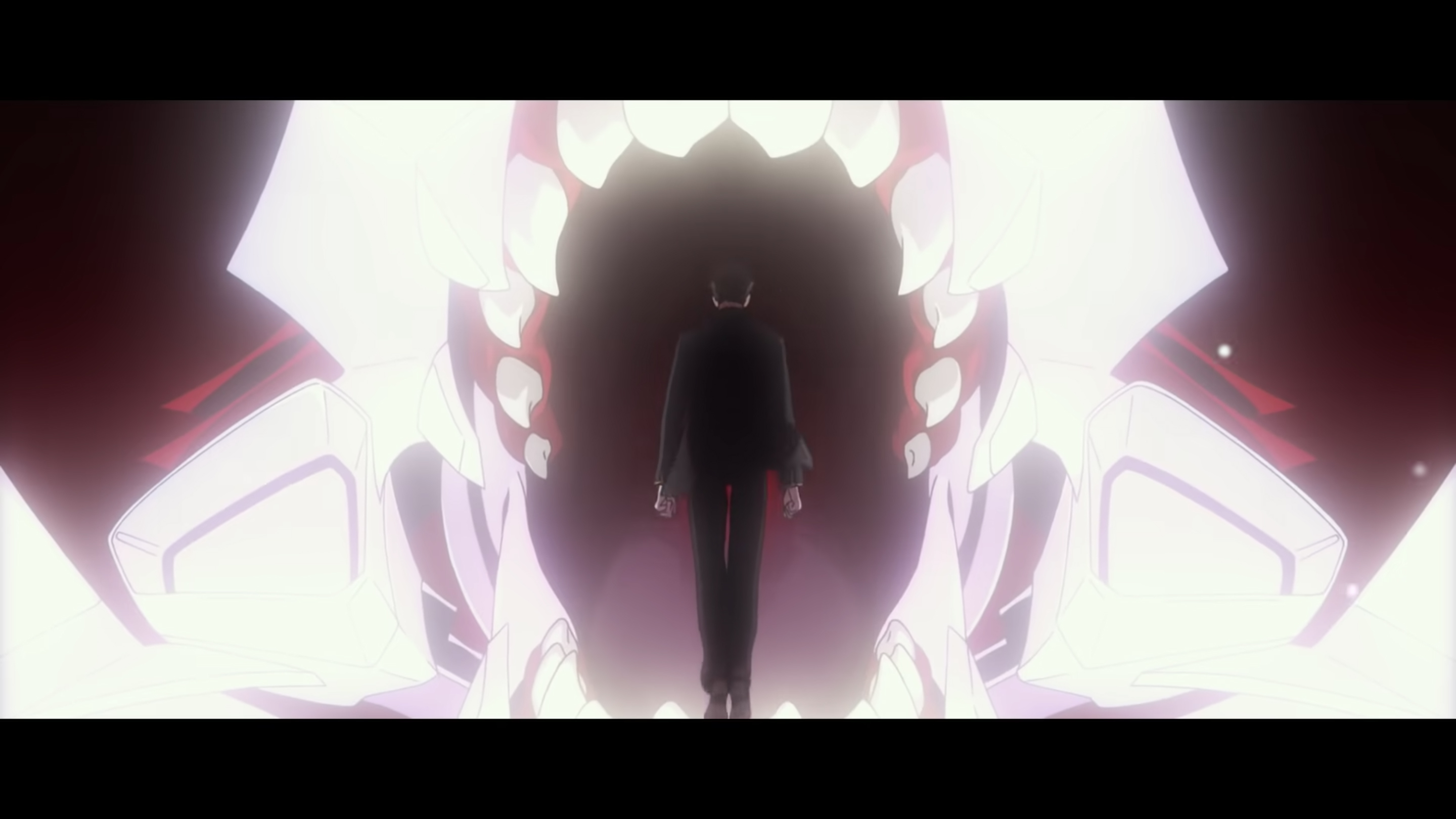 Evangelion: 3.0+1.0 Thrice Upon a Time is currently showing in theaters across Japan, there’s no word on an international release at this stage.