POINT/COUNTERPOINT: Rem and Subaru Are the Best Re:ZERO Couple, Actually

Does this love triangle leave you conflicted? 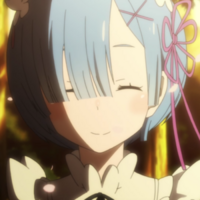 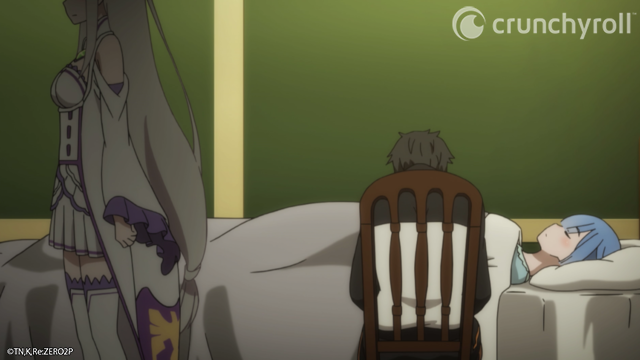 Editor's Note: This is the second of dueling articles analyzing the best relationship of Re:ZERO. Emilia fans click here.

Emilia captured Subaru's heart first, but with how the story and development of characters progress, at times, it doesn't feel like Emilia and Subaru are the destined couple of the series. It's not a matter of preferring one pairing over the other, but rather the story itself presents a strong case for Rem. Let's explore Re:ZERO's unique approach to the love triangle trope and how the relationships develop. 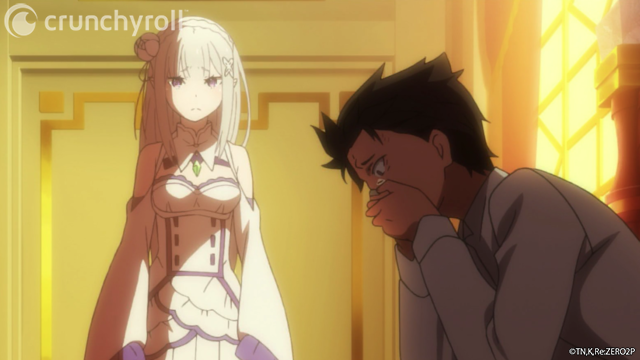 When Subaru arrives in Lugnica, he's saved by Emilia after finding himself in a dangerous situation. Utterly grateful, Subaru helps Emilia find her insignia and they get to know each other as they journey throughout the city. At first glance, this is a sweet encounter. Here are these two characters who, at this point, don't have many people to lean on, enjoying each other's company. Watching Season 1, I initially interpreted Subaru's affection toward Emilia as less romantic love and more idealization, building up this perfect person in his head because it doesn't feel like there are many defining moments showing why Subaru is so drawn to Emilia. While there are cute moments bringing them together, to me, there were actually stronger moments highlighting Emilia's confusion about Subaru's affection toward her and the tension it brings.

Subaru always says he's doing everything for Emilia's sake. Emilia IS Subaru's strongest motivation, but constantly seeing Subaru hurt starts to overwhelm her. Emilia isn't ungrateful, but she doesn't understand why Subaru's pushing himself so hard. Without realizing it, Subaru is inflicting Emilia with a sense of guilt and distrust. Emilia allows Subaru to accompany her to the capital, but he doesn't listen to her, embarrasses her, and puts himself in danger, once again claiming it's all for her. Frustrated, Emilia delivers a powerful speech, shedding the perspective that Subaru may be partaking in these crazy situations, not for her, but for his pride. Which I can understand because Subaru wants to be better than who he was. All Subaru wants is for someone to understand what he's going through, while Emilia just wants to be treated normally. Sadly, the characteristics they desire from one another aren't achievable at this time. 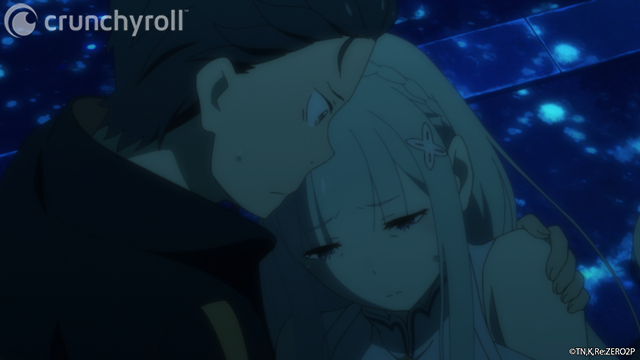 Emilia and Subaru reunite at the end of Season 1 and the issues they faced were more or less cleared up. They even share a touching moment with Emilia offering to help carry the burden Subaru feels from failing Rem. With Emilia and Subaru in a better position at the beginning of Season 2, I was excited to see the progression of their relationship, but there were still issues holding them back.

Season 2 focuses on liberating the sanctuary in which Emilia has to undergo trials to do so, and they're no joke! Emilia's having a difficult time completing them because of obstacles holding her back, like confronting her past. Since Subaru loves Emilia, he's willing to take on the trials for her so she doesn't have to suffer, but Emilia is having none of that! I understand Subaru wants to help Emilia, but she gets annoyed with Subaru over this suggestion. It's her journey, her past she needs to overcome. By trying to do it for her, I felt Subaru was unintentionally undermining Emilia's strength and ability to complete this challenge on her own, stunting her growth as a character. Subaru means well, but this is another instance where his ideals get in the way. By only seeing Emilia as this girl he needs to protect, he fails to see who she really is and what she needs to do for herself and those around her. 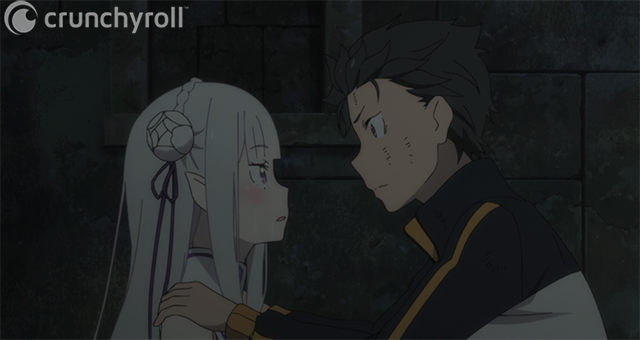 Subaru also dislikes showing weakness in front of Emilia, preventing them from growing closer. In Episode 35, Emilia expresses how she felt relieved seeing Subaru's vulnerability for the first time. Subaru would rather Emilia never witness that side of him because he doesn't want her to see him as a "weak, helpless loser." This moment shows Subaru can't be 100 percent real with Emilia. Even though Subaru's been able to unwind around Emilia before, he still felt ashamed. Feeling like he needs to be seen as "cool and collected" is another issue preventing their relationship from maturing. For so long, Subaru has only seen one side of Emilia, and he's only shown her one side of him. Luckily, we see some change by Episode 40.

Subaru professed his love for Emilia time and time again, but it was difficult at times to understand why because it felt like Subaru was never giving an authentic answer. This time around his confession is genuine. He's telling Emilia every quality he loves about her, respecting her strengths, and recognizing her weaknesses. Subaru told Emilia what she needed to hear, even if it wasn't easy. This moment lifts Emilia and they're finally at a place of mutual understanding where they can raise each other up. Although Emilia and Subaru established a stronger bond at this moment, and I acknowledge and better understand Subaru's genuine feelings for Emilia, there was another connection I couldn't help but feel attached to because the story already spent a great deal of time developing another strong relationship, Subaru and Rem. 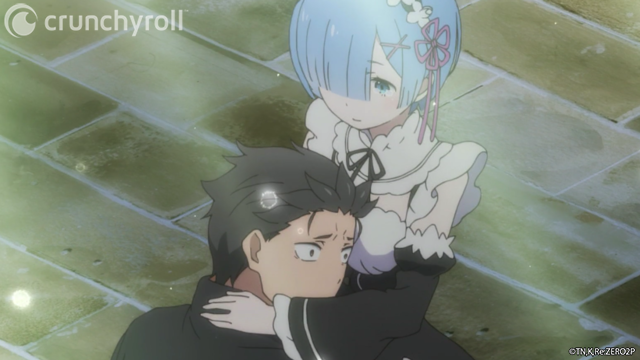 After thwarting Elsa's murderous plans, Subaru awakens at Roswaal's mansion to the sight of twin maids Ram and Rem. At first, Rem is suspicious of Subaru because of the witch's scent and ends up killing the guy in one timeline. You'd think getting killed would be a deal-breaker, but Subaru feels a deep sense of appreciation for them taking an interest in him and he works hard to earn their trust, which eventually pays off with Rem.

Later surviving a mabeast attack, Subaru and Rem have an emotionally connecting moment. Rem has a dark past, and although she's worked hard to take on her sister's responsibilities, she still lacks self-confidence. Subaru understands there's more to Rem than how she's presenting herself. He helps her realize she is her own person with great qualities who doesn't need to live solely for the purpose of being her sister's replacement. After what they went through, they both realize if it wasn't for them looking out for one another, their outcomes would've been worse and they can now lean more on each other moving forward.

Rem remained by Subaru's side from that point on, staying with him through thick and thin. She was loyal and comforted Subaru after his confrontation with Emilia. She cared deeply for Subaru's well-being, and even through multiple resets, Rem was always someone who supported him. They're a strong team who trust each other and go to great lengths to protect one another from the witch's cult. Another positive aspect of Rem and Subaru's relationship is his ability to express pain without feeling like Rem will judge him. Their attachment to each other is immeasurable, and because the story really built up their connection, it felt like these two could make it work. So much love was given to Rem in Season 1 it's hard not to get attached to this pairing. If you told me Rem and Subaru would be the main couple of the story, I'd believe you. 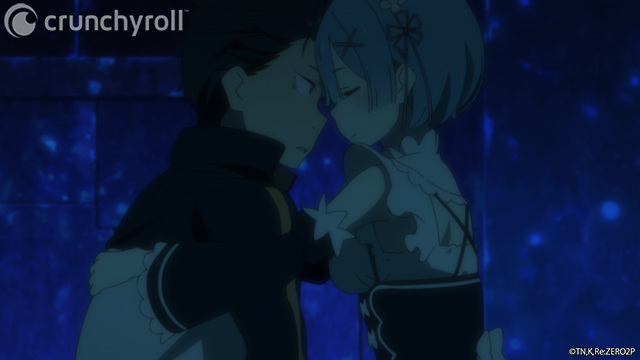 After the battle with the white whale, Rem and the Crusch camp is attacked, and when Subaru and Emilia catch up to everyone, Subaru is crushed to see Rem among the victims. Subaru uses Return by Death in an attempt to rectify the situation, despite his fear of dying. He usually avoids it at all costs, but when he finds a lifeless Rem, he doesn't hesitate to use his "gift" to fix the problem. It's intense, "I suppose," but this moment shows how much Subaru is willing to sacrifice to keep Rem safe. Afterward, Rem remains asleep, and even though she isn't physically with Subaru, the relationship they've built still plays a huge part in his journey.

In Episode 37, Subaru's once again on the verge of breaking, but he's brought back by the one person he really wants to see: Rem. At first, this moment is adorable as Subaru and Rem reconnect, but Subaru knows this isn't real. "Rem" is actually Carmilla, the witch of lust who literally says she only appeared as Rem because Subaru wanted to see her that way. Insulted anyone would try to replace Rem, Subaru expresses how important she is to him. Rem is his rock in hard and trying times. When he was wallowing in misery, breaking down from his failures, it was Rem who was there by his side. It was only Rem who he felt comfortable enough around to show his fragility. To vent all of his insecurities, and Rem had the patience to listen. Subaru knows Rem will tell it like it is, even if it's not what he wants to hear. Again, we see how deep the bond between these two runs. So much passion was delivered in this speech, and the reason I feel like Rem and Subaru can make it to the end is because of instances like this, where Rem is the one Subaru wants to be with most during these real and raw moments.

Emilia is the first love interest, and knowing Subaru's feelings, it's clear how the pairings will play out. Still, a strong case was made for Rem, and I believe her to be the first significant, meaningful bond Subaru established. Regardless of which pair you ship, it's thanks to great development and storytelling that makes conflicting feelings possible, and the love triangle that more bittersweet.

What about these relationships do you enjoy most? Sound off in the comments!

POINT/COUNTERPOINT: Why Do Subaru and Emilia Succeed While Other Couples Fail?