FEATURE: How ODDTAXI's Animals Take on Adult Loneliness and Coping 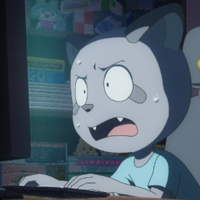 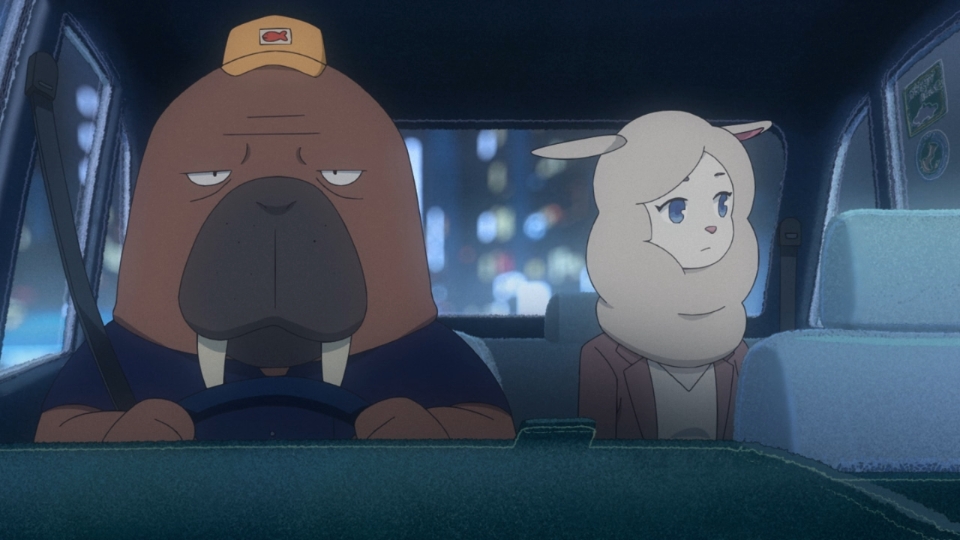 There’s a lot of good anime airing this season. Do you like intense war stories? Go watch 86 EIGHTY-SIX. Found family stories starring giant robots? SSSS.Dynazenon. Austere slice of life about a girl riding a motor scooter? Super Cub. But for those true blue anime-heads searching in vain for the shock of the new, the defining series of this spring for me has been ODDTAXI — an ongoing show about a walrus riding a cab that combines the rapid-fire prattle of Pulp Fiction with Twin Peaks’ sudden swings between comedy and festering horror.

There are many reasons to love ODDTAXI. There’s the contrast between the humorous dialogue, loaded with references to everything from YouTube to Bruce Springsteen, and the lurking darkness that seeps in when you least expect it. There’s a diverse cast of characters, which includes down-on-their-luck comedians, indebted llamas smuggling meds, and gacha-mad cats out for revenge. It’s a show about many things: social media, the generation gap, the entertainment industry, organized crime, and mental illness. I’ve known older anime fans who are tired of shows about and for teenagers who want work targeted at their specific age bracket. To which I say: What kind of adult are you? A struggling college student? A working adult? No anime I’ve seen produced in the past decade explores the contradictions of modern adult life as thoroughly as ODDTAXI does. 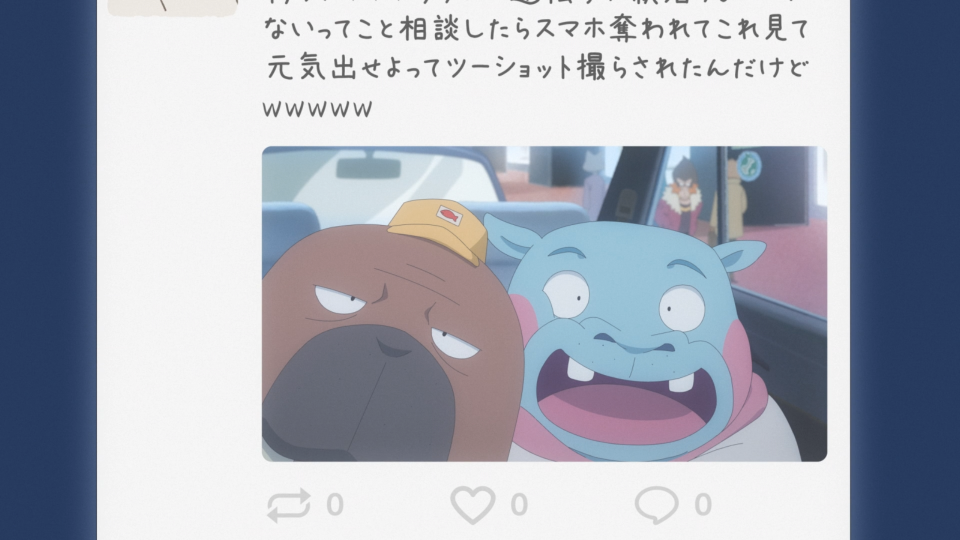 But there’s something else about ODDTAXI that commands my attention. Folks I follow on the internet have been keeping a close eye on the taxi driver Odokawa, trying to figure out if the show’s animalistic character designs are nothing more than his hallucination. But outside of Odokawa, you just have to ask: is everyone else on the show doing okay?

Just look at Shigaki and Baba, known together as the comedy duo "Homosapiens." Nobody wants to make it big in the comedy world as much as Shigaki does. Baba, his hapless partner and friend, is along for the ride. But when Baba begins to try out for other roles in the entertainment industry, he quickly eclipses Shigaki in fame. Baba doesn’t want success nearly as much as Shigaki, yet success falls right into his lap; despite working his butt off, Shigaki struggles to get by as a radio comedian. All Shigaki wants is to be recognized for his efforts, yet that recognition is always just out of reach. Will he die before he receives the acclaim he thinks he deserves? 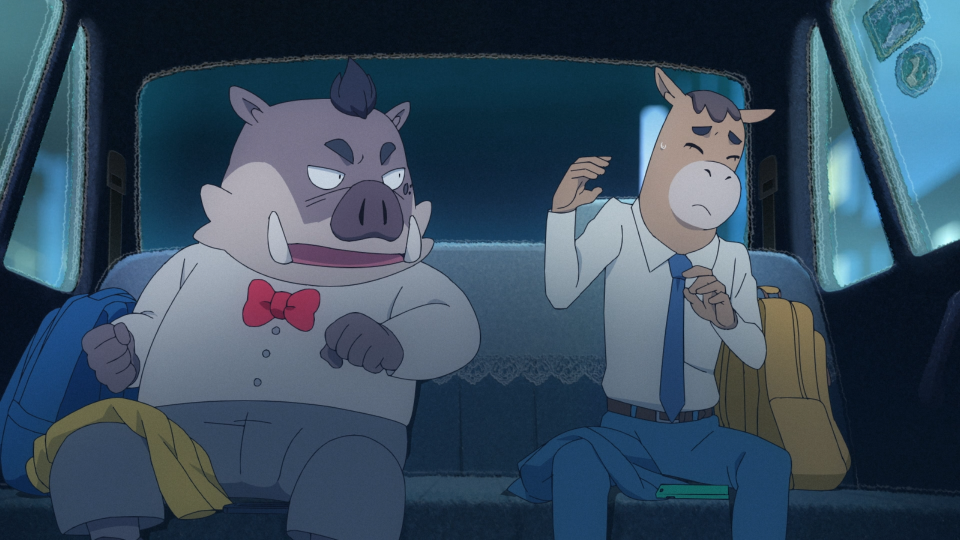 Or see Tanaka, a game developer haunted since childhood by feelings of insufficiency — never cool enough to be someone’s friend, never smart or skilled enough to be worthy of love. He redirects those feelings first into hunting rare erasers as a child, and then into spending all of his savings on a gacha game. Desperately trying to obtain a rare dodo character in the game, he loses his job, his pet, and his own sanity. What kind of life would one have to live for a crude computer image of a dodo to be your white whale? Tanaka wants the dodo, but what does he need?

Plenty of anime characters have ambitions. Some characters in ODDTAXI, like Shigaki, have ambitions, but others just want things. Some need money to pay their dues. Others buy CDs to support their favorite musical acts. Like many working adults who seek comfort in routine so as to avoid looking at the gaping hole at the center of their own lives, much of the cast of ODDTAXI participate in unhealthy coping mechanisms so as to forget their lack of control. They do so to escape the debtors breathing down their necks, the perceived happiness and success of their friends, and the fact that the idol you support will never really know or care about you.

Since this is a show about adults, it’s also worth thinking about the elephant in the room: the ticking clock of age. Shigaki isn’t a Luffy or a Naruto, and he’s running out of time to make it big. What would Shigaki do with his life if he never does? What would someone like Tanaka be willing to sacrifice in order to prove that his life meant something? Meanwhile, the protagonist Odakawa is liked by others, justly or not, because he is reliable: as a 40-year-old taxi driver, he makes decisions according to his own principles and rarely succumbs to the insecurity chasing everyone else. Of course, we’ve seen hints that Odakawa is nursing an even deeper wound. We just don’t know. 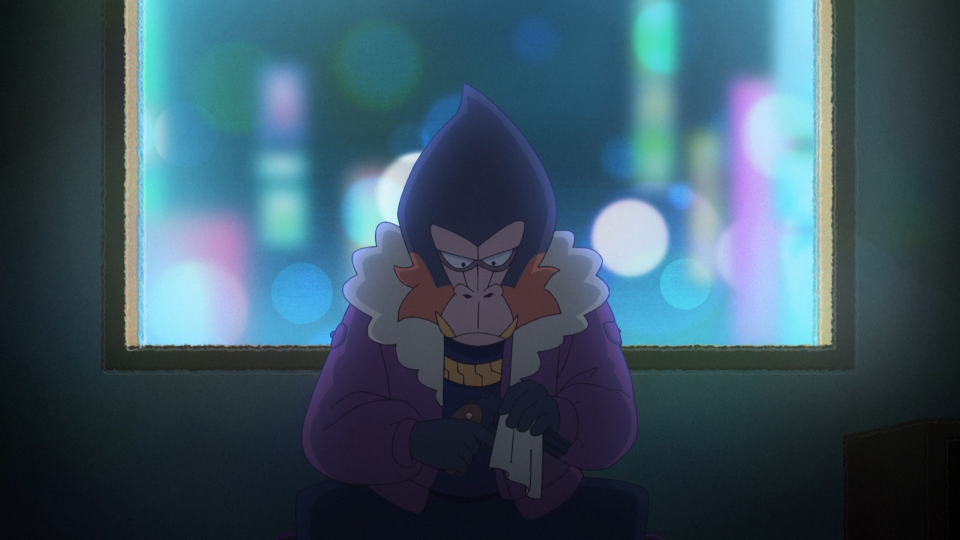 There’s a ghost haunting Odakawa’s town. The teenage girl that goes missing at the start of the series, and whose presence is an ongoing mystery. But it’s also a hollow that torments every member of the cast in their own special way. A mysterious broken promise. It’s something that I know, and you know. The miracle of the city, the chance to have what you’ve always wanted, always out of reach. As ODDTAXI reaches its midpoint, we have already begun to see the human cost taken as the city’s linked strivers plot and counterplot on the streets for that shining impossible thing.

A few weeks ago, a friend of mine on Twitter compared ODDTAXI to Paranoia Agent, Satoshi Kon’s bizarre 2004 drama about a vicious social contagion. I thought that comparison was on point, which is shocking: How many other shows are out there like Paranoia Agent? Nothing, until now. ODDTAXI is comparatively small and cheap, a show about a 40-year-old walrus who drives a cab. But if we see another show this year that strives as boldly to capture the social malaise that dominates capitalist city life  — that futile longing, that gnawing hunger leading to self-destruction  — I’ll be very surprised.

Are you watching ODDTAXI? Who is your favorite character? What’s the most regrettable decision you’ve ever made playing a gacha game? Let us know in the comments!

Adam W is a Features Writer on Crunchyroll. When he isn't thinking about Beastars, he sporadically contributes with a loose coalition of friends to a blog called Isn't it Electrifying. You can find him on Twitter at: @wendeego