FEATURE: Yugi Muto Shows Us Why Sharing Our Talent Is So Important 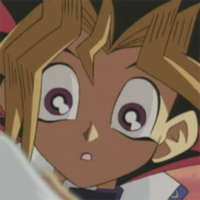 When you're young, there's an inherent kind of thrill to discovering you're good at something, especially if, all too often, you don't fit other's expectations of being good at stuff. I was clumsy and awkward as a child. My attempts at joining in games like dodgeball almost looked ironic. I know it might seem hard to believe coming from someone who spends 90 percent of their time saying different variations of "One Piece is good," but I felt uncomfortable in most social situations. I'd spend school dances hidden away in the cafeteria where they'd set up tables for anyone that didn't feel like slowly swaying side-to-side, torsos a chaperone-mandated six-inches apart, to Michelle Branch's "Everywhere." Huddled around those tables, I'd wait for my parents to come pick me up and usually watch people play collectible card games — Magic the Gathering and Yu-Gi-Oh!

It's an image akin to how the first episode of the Duel Monsters portion of Yu-Gi-Oh! starts, with pals Yugi and Jonouchi playing a game of Duel Monsters while their classmates hover over them, marveling at Yugi's skill. It's not the beginning of the actual storyline — that would lie in the yet-to-be-released-in-English "Season 0," which starts back when Yugi is actually being bullied by Jonouchi and series creator Kazuki Takahashi had yet to pivot a majority of the series around monster card battles. But it is a good introduction to the character that Yugi is, which is a good guy. 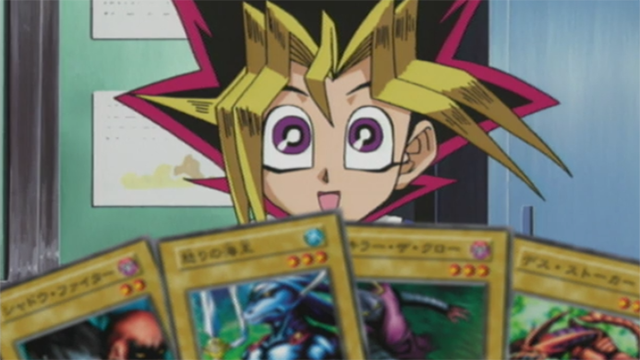 Yugi, much like many of his anime peers, is prodigiously talented at his chosen manner of competition. What he lacks, though, is the sense of aloofness when it comes to relating that talent to others. Whereas someone like Goku or Luffy might encourage you to train and get better, there's a part of them that's relatively unknowable. It might be what gives them this kind of "killer instinct," this will beyond wills to achieve even when success seems impossible. It's awe-inspiring but it's also untouchable. You'll never learn to be able to win in the same way that they do.

Yugi's relationship with Jonouchi showcases something different. From the beginning, Yugi wants to shepherd Jonouchi into the finer arts of the Duel Monsters battle. Jonouchi's talent at the game is dwarfed by his desire, and Yugi and Yugi's grandfather take him under their wing to teach him how to act (and react) with more measure and play with more confidence. It's this kind of thing that turns the "Heart of the cards" theme into more than just a mantra to slap on tough narrative situations and/or memes. There's active aid and participation between the two main characters. 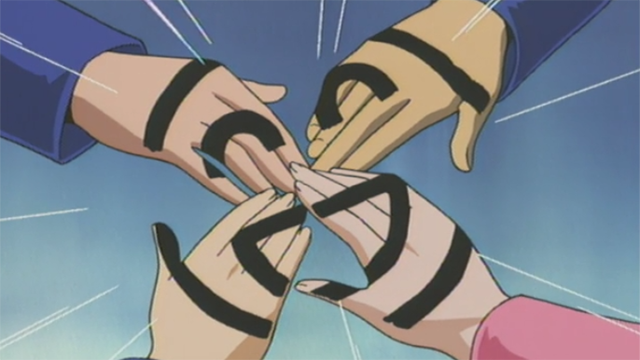 Now, Yugi is obviously the star of the show. He tends to get the biggest victories and a solid chunk of the focus is on him and Yami Yugi, the spirit of the Pharoah in the Millennium Puzzle he wears. To an extent, this means that secondary protagonists like Jonouchi and important side characters are going to basically stand around and clap from time to time while Yugi does cool stuff. That's just the nature of the game. It helps that there is a back and forth between Yugi and Jonouchi. Yugi helps him with his deck, gives him tips, and even offers him cards like the Time Wizard, as he knows Jonouchi might need it if he's in a bind.

Meanwhile, Jonouchi is the first person to stand up for Yugi when the time calls for it, his brash attitude clashing with anyone that refuses to take Yugi seriously. When Insector Haga throws Yugi's cards overboard, Jonouchi is the first to dive in. It's an early sign of Jonouchi's gratitude for their friendship. Yeah, Yugi is nice and all, but he actively helps Jonouchi feel better about himself. Jonouchi is no longer the schoolyard bully thanks to Yugi. He's becoming a competent Duel Monsters player, a source of pride and self-respect. That kind of sharing your skills and your knowledge does a lot for a person. On a wider, real-life scale, it shows the importance of giving and discussing the things you love and are fascinated by, rather than any manner of gatekeeping. So many fans have been created and have been given lifelong passions because someone else said, "I love this thing. Would you like to know why?" 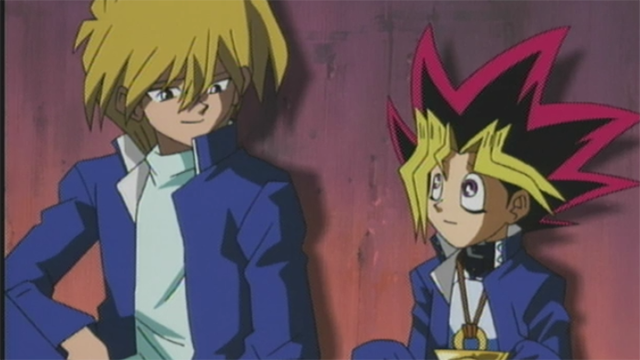 I never became good at collectible card games, and the times when I was invited to play at those cafeteria tables usually resulted in pretty quick defeats. But I did end up finding things I excelled at, things that made me feel like me rather than me trying to be someone else. English classes were never really a problem, so I became an English tutor for a little while. The kids I assisted were capable and vibrant and wonderful and they were gonna do great things. All they needed was someone to say, "You've got this, so let's work on it a little while."