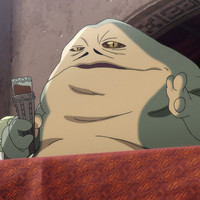 Today marks the launch of Star Wars: Visions, an ambitious anthology project that enlists top talent and renowned studios from the anime industry and gives them the keys to the Falcon. Okay, no one's getting the keys to the Falcon per se, but while they weren't told to take the reins of established characters, studios ranging from TRIGGER (PROMARE) to Production I.G and beyond were given an immense amount of freedom to explore the types of Star Wars stories they've always wanted to tell.

You can see the results for yourself starting today on Disney+. We took an early look at all nine episodes—which run the gamut, telling tales of masterless Jedi, battling bands, and lots and lots of Kyber crystals—and then spoke to executive producer James Waugh and producer Kanako Shirasaki to break down what makes this project work.

The studio lineup is full of heavy hitters of the anime industry. I'd love to know more about how that selection was handled, and if you were reaching out to specific studios from the beginning.

James Waugh: We identified very quickly studios that we wanted to find ways to partner with. I mean, we've been a fan of so many of these studios; Production I.G, TRIGGER, on and on. Science SARU has been such a surprising influence of late, and we knew that we wanted to make sure that the anthology really showcased all the different styles of anime, and different types of creators telling stories in Japanese animation.

Were there any dream collaborations you can mention that didn't quite pan out for this particular project?

James Waugh: I don't think so.

James Waugh: I think we were very fortunate that the studios we were interested in pursuing were interested in us, too. Suddenly, when we would take meetings with them, there was always a story about how Star Wars set them off on their journey of becoming world builders and animators and storytellers. So they were fans right from the start, and the feeling was mutual.

Kanako Shirasaki: Even the directors who didn't really talk about how much they love Star Wars, eventually they'd start talking about this and that, like little tiny episodes of their Star Wars chapter in their lifetime, so it's great to know how Star Wars influenced the lens of animators and creators.

There's a lot of variety in these shorts. What was the story pitching process like as far as each episode is concerned?

James Waugh: We had a framework, a very kind of loose framework for what we wanted Star Wars: Visions to be, which was really a way to unlock timeline-focused development and allow for different creators to celebrate Star Wars through their unique lens and through a medium that, you know, is very specific and has a certain kind of vocabulary to it.

I think the only real rule we had with it was to render your own stories, your own characters. What we didn't want this to do was become like a "What If" show, which is great for Marvel, but that's not what we were trying to achieve here; it wasn't let's do a 'What if Luke Skywalker did this, or what if Darth Vader..." I love those comics, they're great, but that's not what the intention was. The intention was let's go to these creators and say, what amazing stories do you have to tell that take place in this massive galaxy... (laughs) That clearly a bazillion stories could take place in. That's really the way it works.

Then Kanako, you guys were directly engaged with the studios for the process.

Kanako Shirasaki: Yeah, and I think it worked very well, too, otherwise we couldn't have this diversity and stories from seven different studios and nine different directors. So it really worked well, and each director wanted to tell their visions in the anthology, too, so I think the framework worked nicely.

Speaking of that framework, I noticed a lot of the stories—I don't know how intentional this is—feel like they have a thematic throughline, specifically because there are a lot of Kyber crystals here. You don't really see the inner functionality of a lightsaber shown or discussed that much throughout the main saga. Was it a coincidence that a lot of the creators wanted to tackle this subject?

James Waugh: It really was. We had the same reaction, and we've been hearing that from a lot of other interviewers saying they noticed that throughline. And no, we were very much empowering them to tell the stories they wanted to tell, and I think when you look at Star Wars elements that look like they're fun to play with, and to be used in a dramatic way, I think lightsabers, Kyber crystals, these things are something creators are drawn to.

Kanako Shirasaki: Also Japanese anime, or Japanese storytelling in general, when you have some props, you want to show how they work. How the machines transform into different shapes and so on. Maybe that influenced the creators to show how you put the Kyber crystals in the lightsaber or show other things using props.

It sounded like there was a lot of freedom overall, with directors like Takanobu Mizuno (The Duel) asking "can you really do that with Star Wars?" Other than main characters that were off limits, were there any other concepts you had to turn away, or say ‘no, that's not Star Wars,’ or was it really kind of just letting them loose?

James Waugh: I think it was letting them loose. The process was in dialogue, so it wasn't that we sent them off with a framework and there wasn't a conversation and they kind of handed it back. We work at our best when we can have conversations about the values of Star Wars storytelling, or specifically, how can we make the story you're trying to tell more authentic to Star Wars? 'Hey, do you know that we have these things in the universe?' It was kind of an ongoing dialogue with the intention of facilitating their stories.

But yeah, there were definitely those moments of, like, 'are you guys really letting us do this?' (laughs) Yes, yes we are. That's the point! We want to figure this out, we want to make it work. As long as the stories have heart and soul I think we were happy.

Kanako Shirasaki: It was like, had anyone ever considered attaching two Star Destroyers into one? No, but…

That was a very TRIGGER thing to do.

Anime has found a lot of success in these anthology-type stores, from The Animatrix to Batman: Gotham Knight and now Star Wars: Visions. What do you think it is about anime that makes it ideal for this style of storytelling?

Kanako Shirasaki: The first thing is, there are so many animators working in Japan who are trying to explore their own style. Studios trying to find their own style. I think there's already huge diversity in there, and maybe that really appeals to different creators around the world to want to explore and showcase these different art forms and styles of storytelling.

James Waugh: We knew very quickly that we wanted to show the breadth of the amazing different voices that are coming out of Japan. We didn't want to just be one note, in that way. So yeah, you're right, it does always seem to work with [those anthologies], but I mean it's purely because we wanted to see different people's perspective on Star Wars, and see the world-building that they would bring given the opportunity.

And now you can work a double Star Destroyer into the next movie.