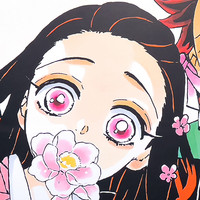 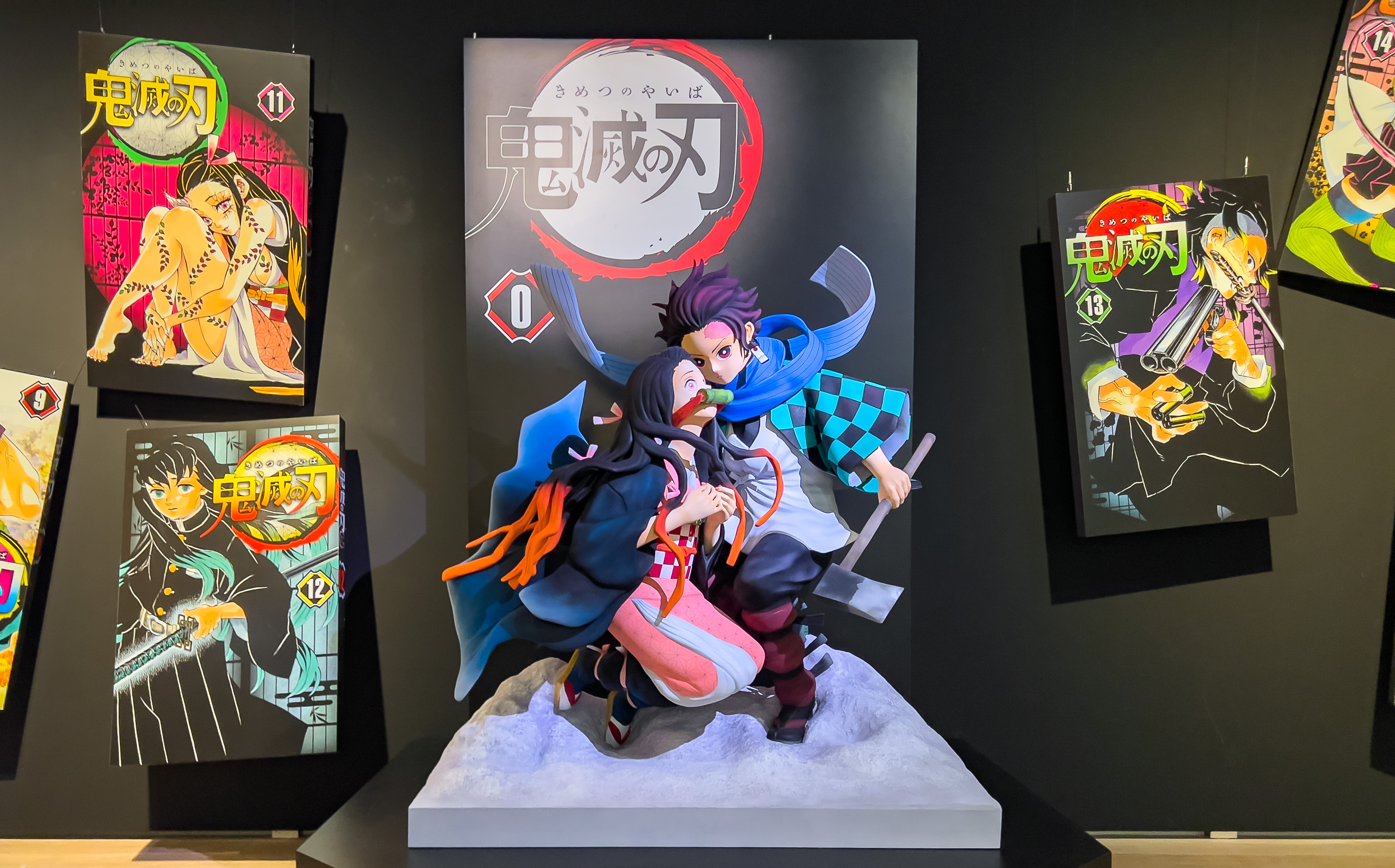 WARNING: Spoilers for the end of the Demon Slayer: Kimetsu no Yaiba manga.

Demon Slayer: Kimetsu no Yaiba has been at the top of the world, ranking high on the manga charts, the worldwide box office charts, and even television rankings. Now the franchise is literally on top of the world with its first art exhibition currently being held in the Roppongi Hills Mori Tower on its 52nd floor, and we were there to check it out.

Under the backdrop of Tokyo Tower in the 6th highest building in Japan, the Kimetsu no Yaiba Gotoge Koyoharu exhibition was the first exhibition for the manga creator and was completely supervised by them. Each “chapter” started with a message from Gotoge, explaining the reasoning behind the theme chosen for that section. 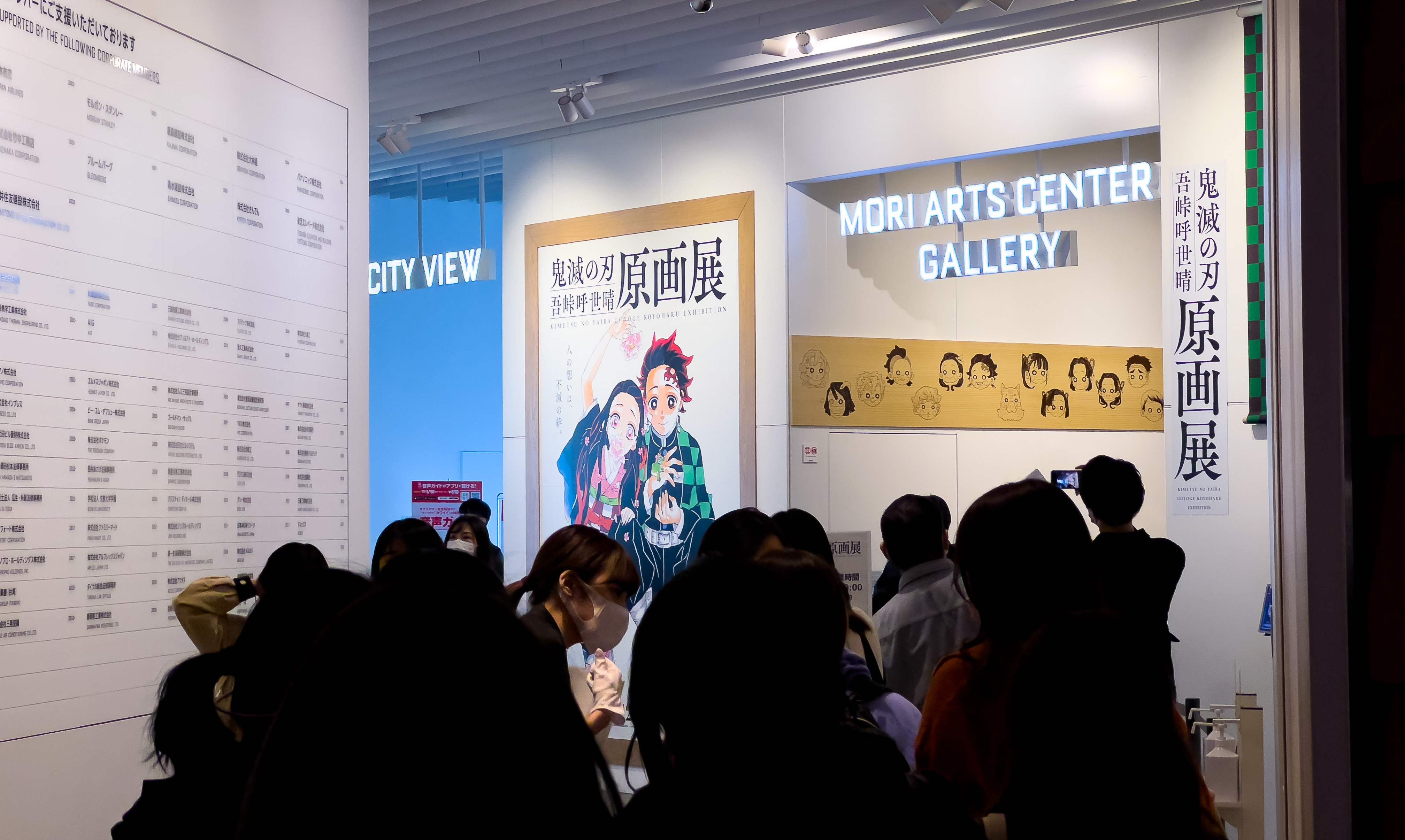 Ahead of the “first” chapter, the “prologue” of the exhibition was a collection of all the manga covers and a statue of Tanjiro and Nezuko in the center. The area was only one of two that was allowed to be photographed in the exhibition. Next to it was the first message from Gotoge explaining that “embedded in every page [of the Demon Slayer manga] is an overwhelming piece of expressive artwork created under the pressure of weekly serialization” and the overarching theme of Demon Slayer is that “human emotion is an undying bond.” This theme was what Gotoge wanted to present throughout the halls of the Mori Arts Center.

The first chapter was just titled “Bonds,” showcasing important moments of each character we met in the Final Selection. Unlike regular exhibitions that may just have finished original manga pages on the wall — which the Kimetsu no Yaiba Gotoge Koyoharu exhibition had — they also had panels blown up and stuck to the walls.

I hadn’t seen a manga exhibition presented in this kind of way before, especially on this kind of scale. The presentation was so detailed you could see the subtle brushstrokes of Gotoge’s art in the blown-up illustrations, as well as the white-out Gotoge used for the highlights (as well as clean up).

While it would have made sense for Nezuko and Tanjiro to have the biggest and most impressive sections, it was nice to see each character had the same amount of care put into their area.

The end of “Bonds” was the first piece of exclusive art in the exhibition, the first time Urokodaki’s face had been shown with the tengu mask off. Gotoge explained that Urokodaki wore the mask because Kuwashima (Zenitsu’s master) thought his gentle face would make him look weak to demons. He then wore one to the next Hashira meeting, confusing everyone and making Kuwashima flustered.

After “Bonds” was the “Oni/Demon” area, this time letting the key moments from the demons shine. The area was presented in a circular fashion around a central pillar that was a giant statue of Muzan. The closest demons to Muzan were the upper ranks, with the lower ranks surrounding the area on the walls. The walls of the upper ranks were double-sided, with the front presenting a key moment of theirs as a demon, and then on the back their “sorrow” painted in an obvious black and white. Muzan’s central pillar was mostly focused on his human traits and story.

The life-sized cut out of the Infinity Castle: 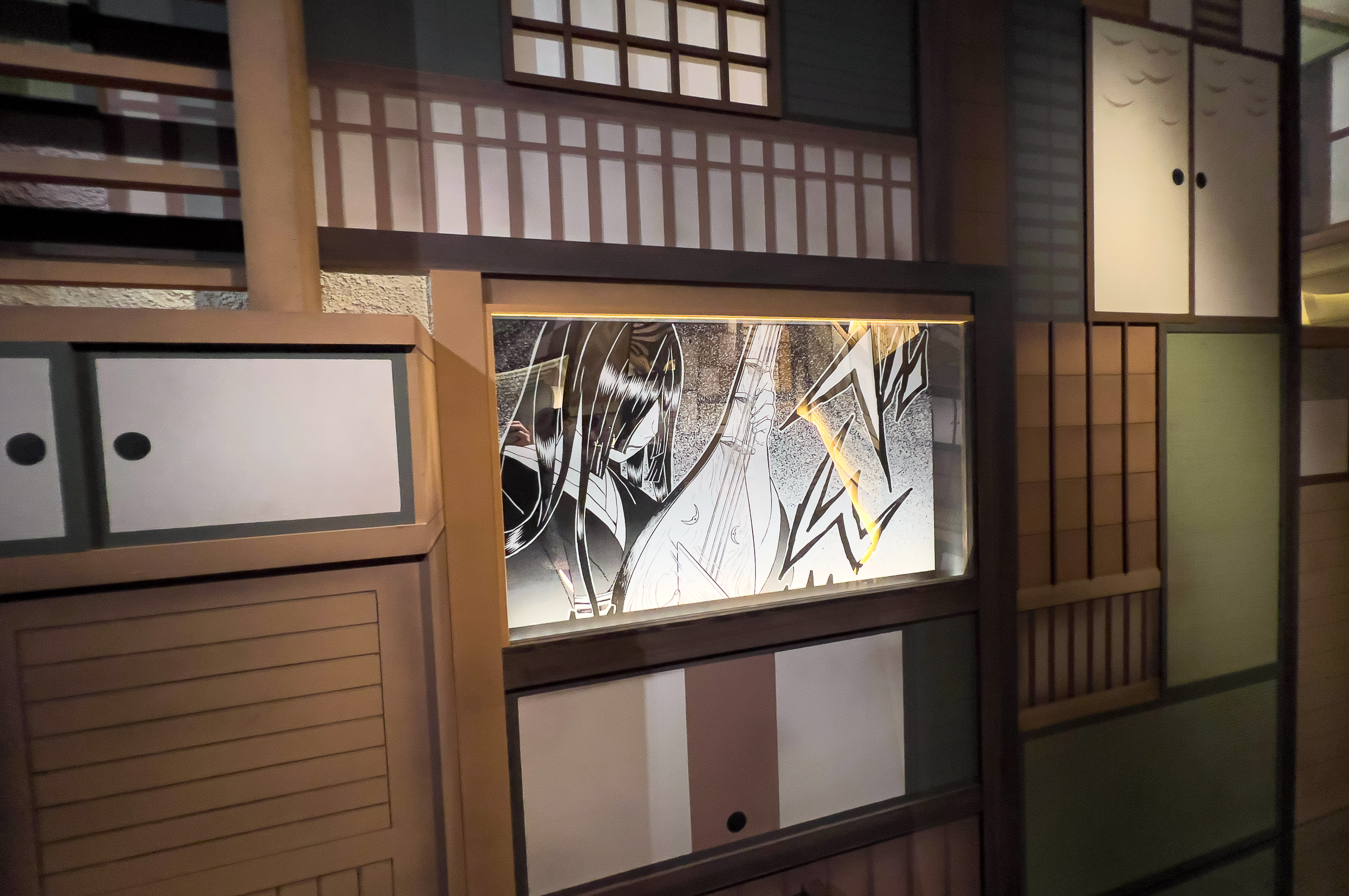 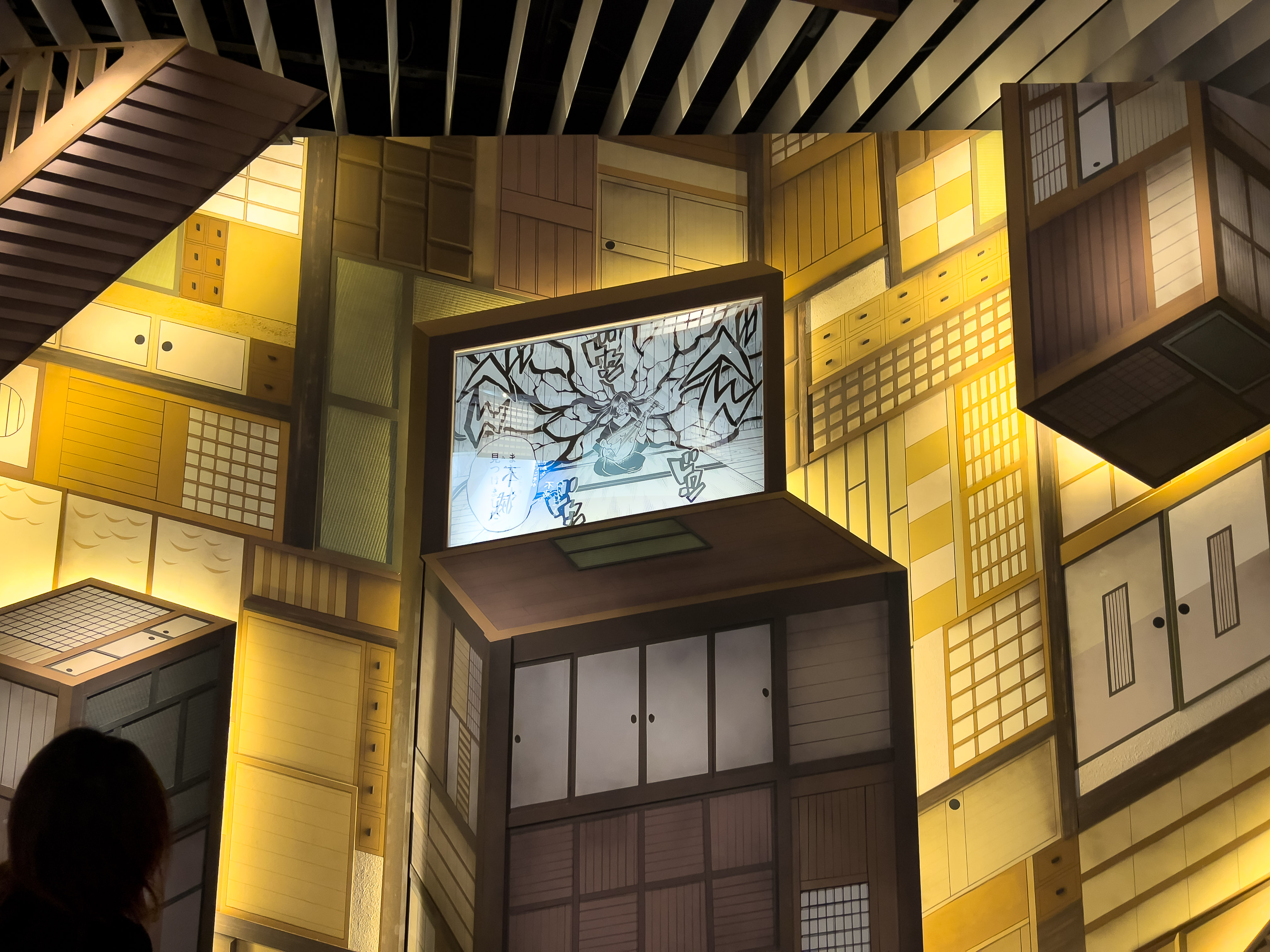 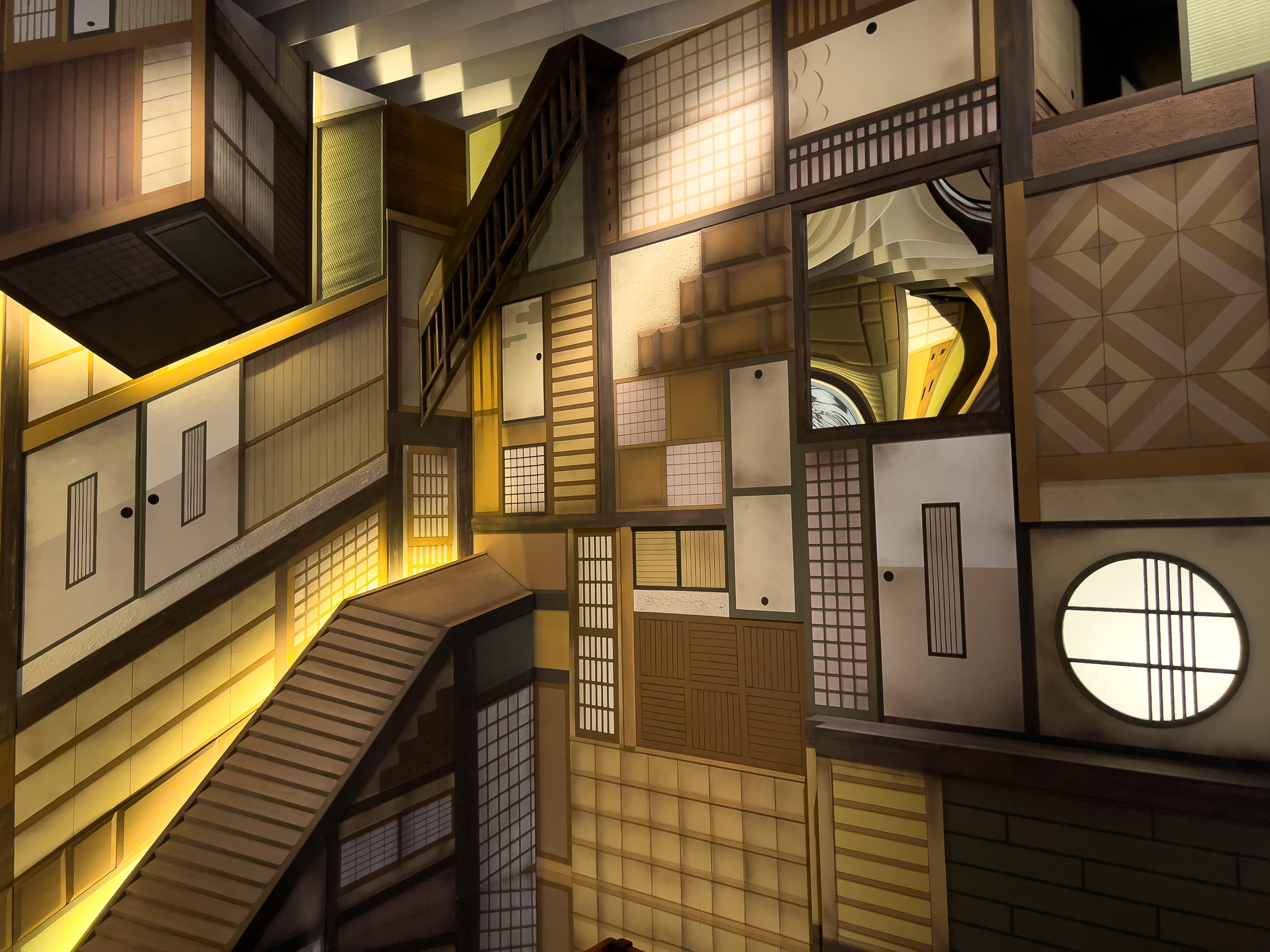 Following the demons in their area was their home, the “Appearance of the Infinity Castle,” a huge reconstruction of the castle as seen in the manga where the first part of the final fight took place. The construction had the sound of shamisen playing while manga panels appeared in the reflections at certain times, making me feel super uneasy. Beyond this is where Muzan’s “sorrow” rested.

This is also where Gotoge shows an image of Ubuyashiki and his younger brothers for the first time. Gotoge revealed that the middle brother, Senri, hated his life of dressing as a woman. This caused him to set the estate on fire and force Akito to commit suicide with him. Kagaya at the time was 9, Senri was 8, and Akito was 6.

The next chapter, “Hashira,” did much the same as the Final Selection characters, picking out key moments from their journeys and presenting the finished chapters from Gotoge’s pen. Throughout the area, giant paper installations of the Hashira techniques were above us as we walked through the exhibit. The flames of Rengoku, Himejima’s the ball and chain, and Iguro’s snake was mind-blowingly impressive.

The fourth chapter was “Connection - Everything At Stake,” where Gotoge presented how people, despite their own internal struggles, are intertwined by fate and friendship and that even if someone is in their final moments, they will “pass on the light of their lives” to others, echoing many moments from the Demon Slayer series.

Here is where the bonds between characters were collected and shown off. Each section was dedicated to a certain theme, with more moments from the manga blown up and presented with such care. Those sections were “Master and Apprentice,” “Mother,” “Family,” “Brothers” — with life-sized versions of Genya and Tokito — and “Benefactor.” Red Spider-Lily flowers bloomed on the bottom of the entire section, giving the whole section a haunting feel — though it was about characters who fell throughout the story.

“Moment - Millennial Dawn” was the fifth area of the exhibition, and the final main chapter dealt with the final fight between the Demon Slayer Corps. and Muzan’s rank of demons. This chapter of the exhibition once again showed off-key moments from the arc through completed pages. While most of the pages throughout the exhibition were cleanly presented (though some white-out and black marker streaks could be seen) a lot of the pages in the final fight still had the blue pencil under the ink that would have been used by Gotoge to draft the pages unerased, showing just how much pressure Gotoge was under in those final few chapters. 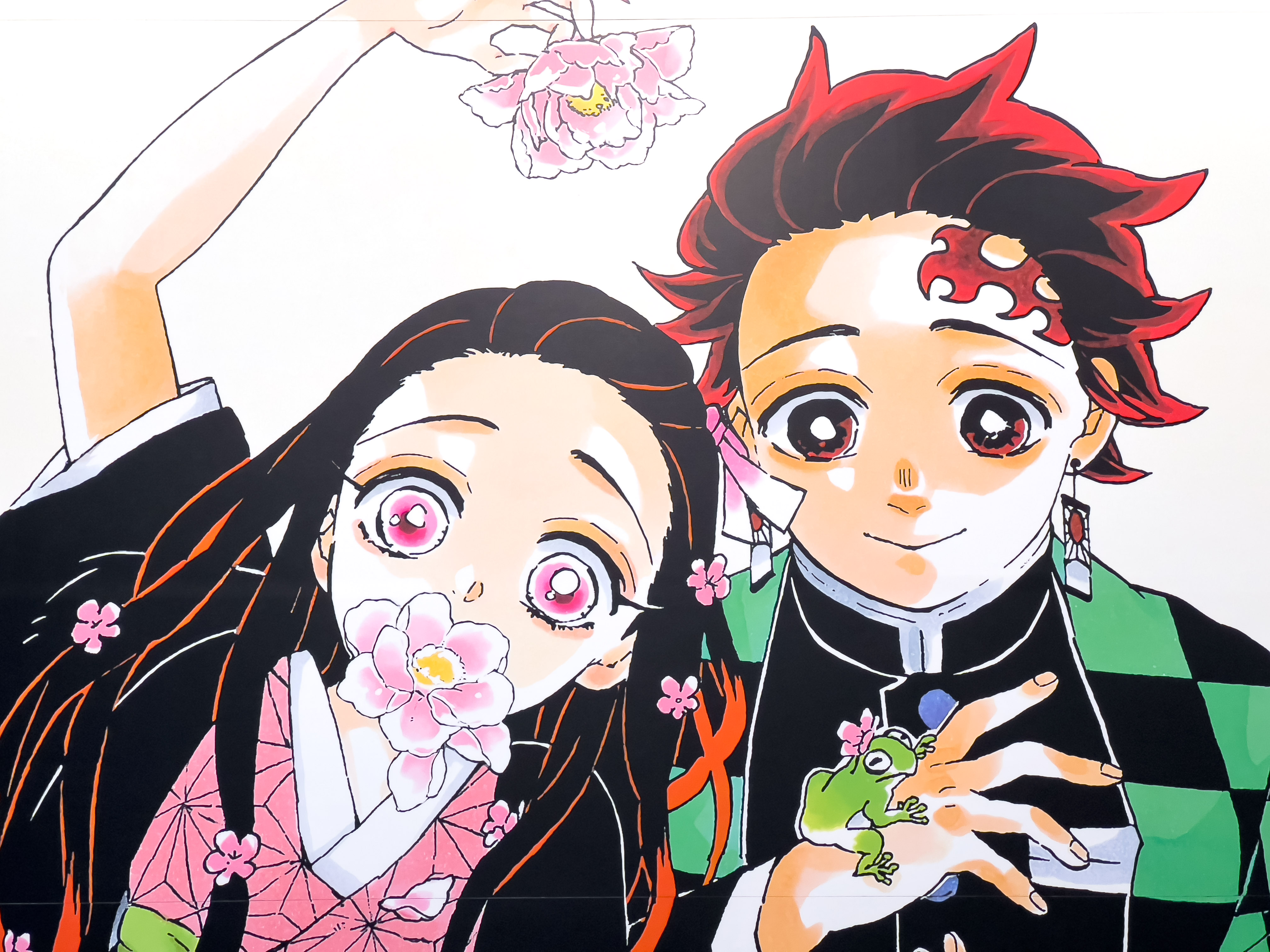 The final chapter was “Inheritance - Transcending Time, For Eternity,” an epilogue that focused on the moments after the final fight, including Tanjiro going berserk and needing the bonds he had made to keep him from becoming the monster he just defeated. Wisteria lined the roof of the subtlest area in the exhibition. It was beautiful, reflective even.

The last part of the epilogue looked at the exhibition-exclusive “The Legend of Zenitsu” illustrations by Gotoge, an autobiography of the series from Zenitsu’s point of view. After the end of the manga, Zenitsu was said to be a wonderful artist who may have been a bit forgetful of the finer details of the gang’s adventure, slightly playing up certain aspects. One of the images he drew of his wife Nezuko was so beautiful that people would travel across Japan to buy it to hang on their wall, Zenitsu is said to have tore at his pants at the request and exclaim, “Who in their right mind would sell their wife?”

The final wall of the exhibition was exclusive images drawn by Gotoge that didn’t fit in anywhere else, as well as a mural of the kids we met at the end of the Demon Slayer manga in modern-day and how they were connected to each other. 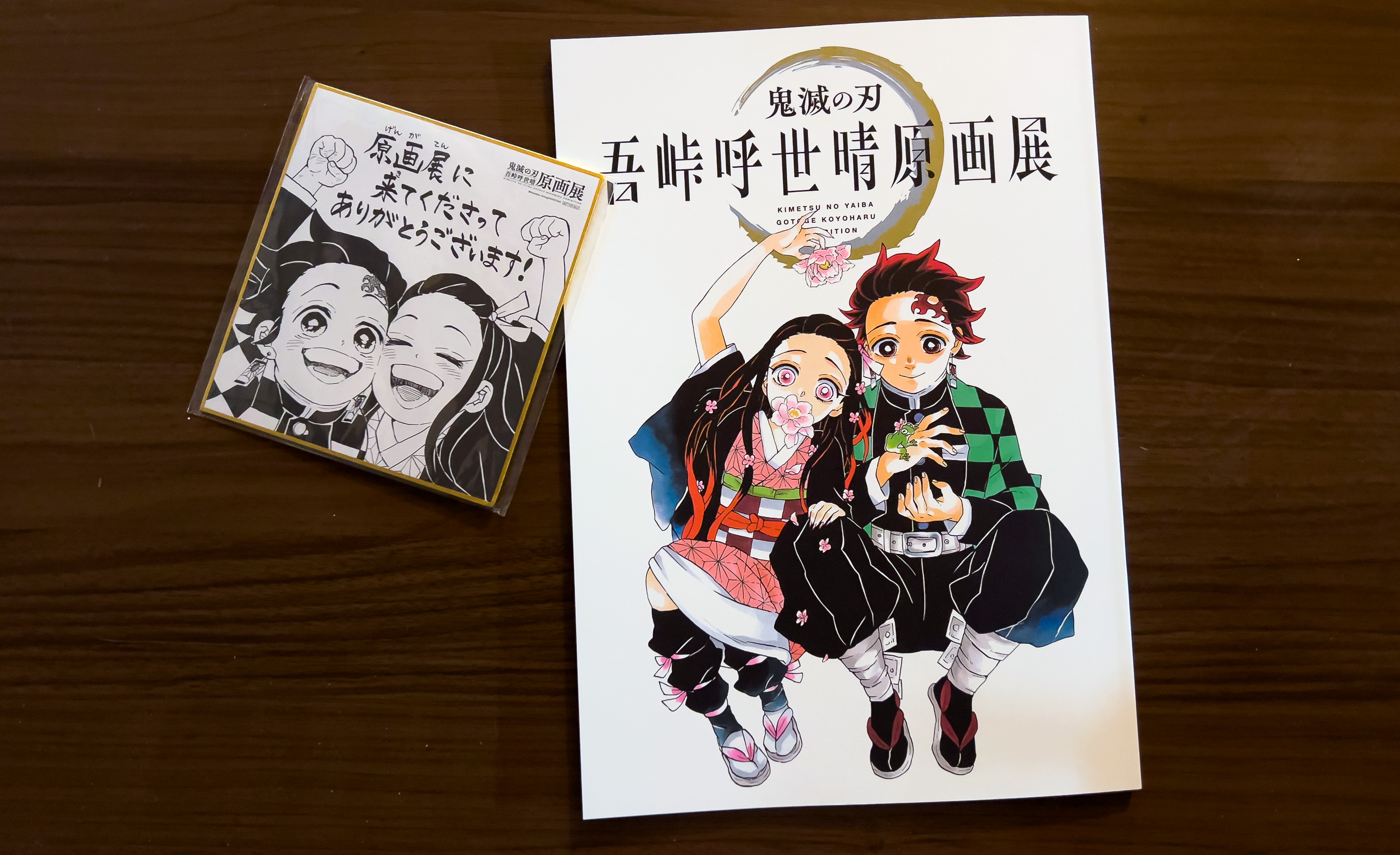 I couldn’t have imagined the exhibition being as good as it was. Not only is Gotoge a masterful creator, but they’re also a wonder curator of their own art and story, being able to present it in a way that felt fresh to the people that would have likely read the entire manga — and if you didn’t, well, the exhibition spoiled the entire thing.

The Kimetsu no Yaiba Gotoge Koyoharu exhibition is currently running in Tokyo until December 12, where it’ll be moving to Osaka in July 2022. 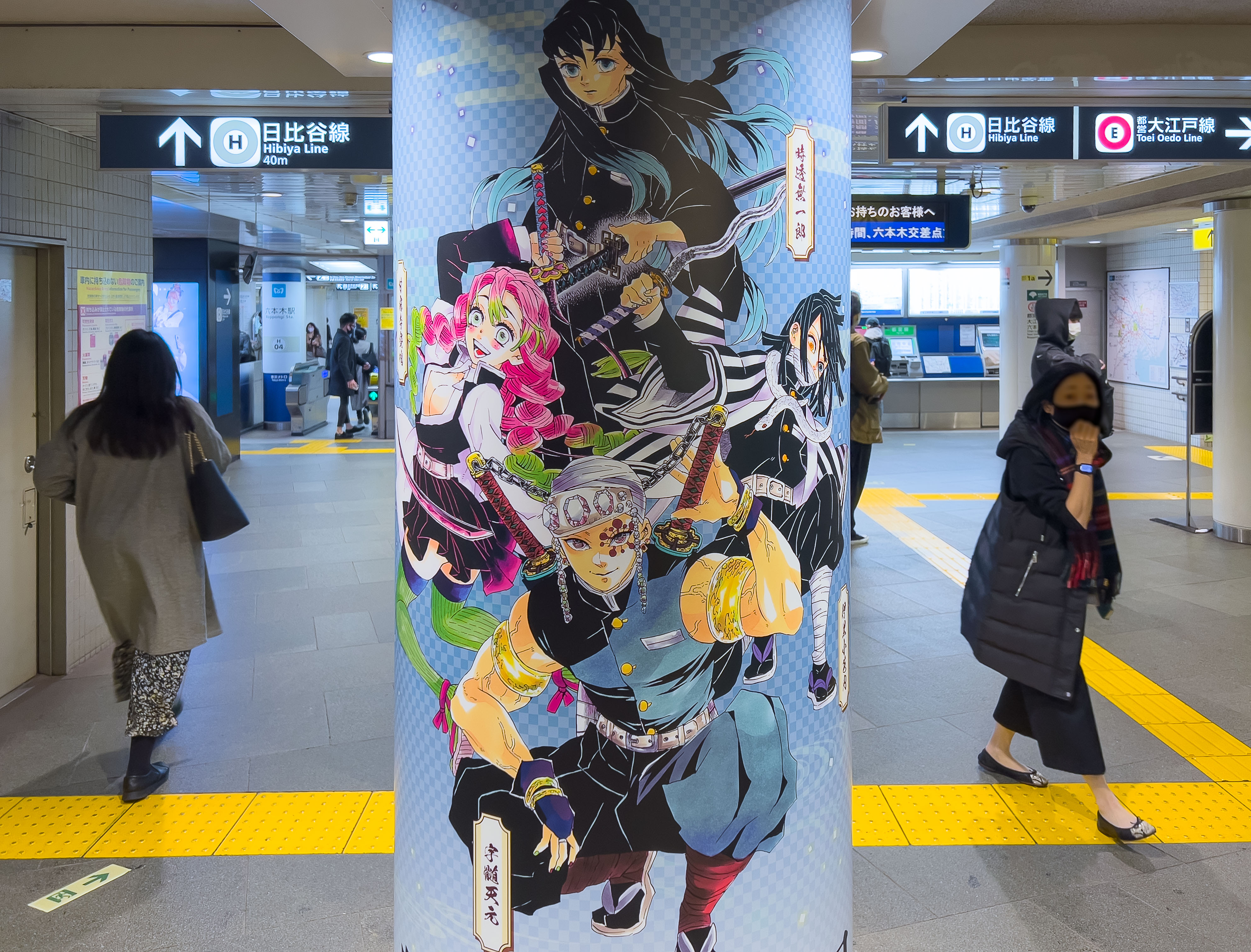 An advertisement for the exhibition on the subway (Photo: Daryl Harding)