REPORT: The Kyoto International Manga Museum Is A Loving Tribute To The Art Form

From shonen to shojo, Edo to Reiwa, manga throughout the ages 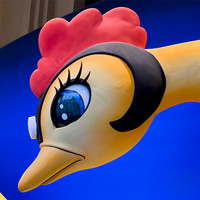 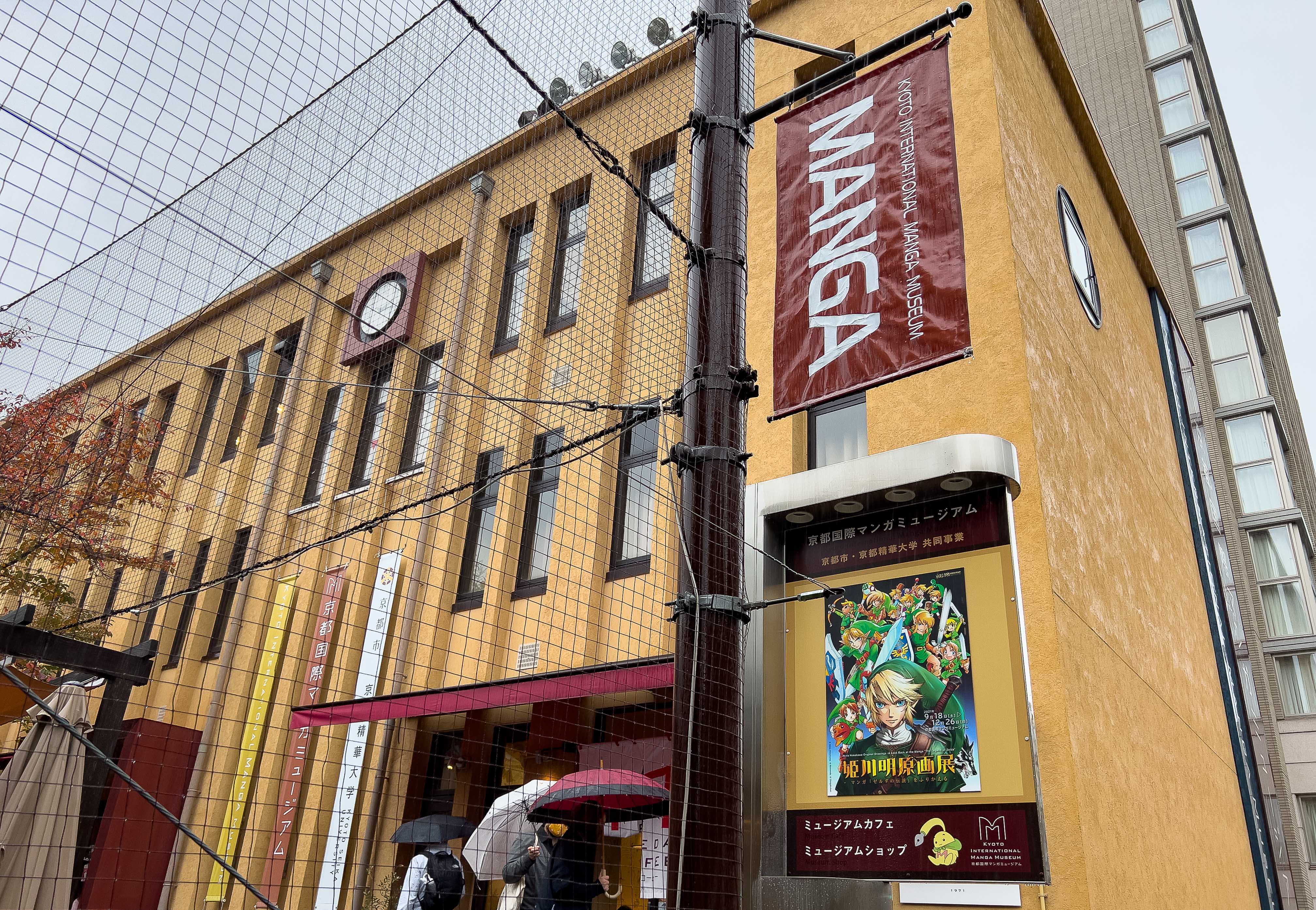 In the heart of Japan’s historic capital city, inside a remodeled elementary school, is the largest and most extensive museum dedicated to manga in the world — and it doesn’t shy away from the medium’s colorful worldwide history.

The Kyoto International Manga Museum not only has permanent exhibitions that have been built up over time but also limited-time ones — including an exhibition that was held online during these uncertain times — ironically, about pandemics in manga and comic books. The limited exhibition on display while I was there was centered on the works of Akira Himekawa, who are best known for penning The Legend of Zelda manga series.

Traversing the halls of the Kyoto International Manga Museum is like walking through a multi-story library where you can pull out manga from a century ago and just read it where you are. Throughout the museum, people are just reading. Everywhere you look. This collection of manga was collected by a bookstore in Tokyo over 20 years prior to being donated to the Tokyo Foundation and onto the museum when it opened in 2006 and then expanded upon by the museum since then.

Classics like Fist of the North Star and JoJo's Bizarre Adventure, appeared in their original collected volumes, as do first printings of Unicorn, Grandoll, Tezuka’s Dotsuitare, Golgo 13, and many, many more. In keeping with the museum’s ethos, they’re all available to be picked up and read. The museum even had manga translated from all over the world — an entire wall was just volumes from Viz. 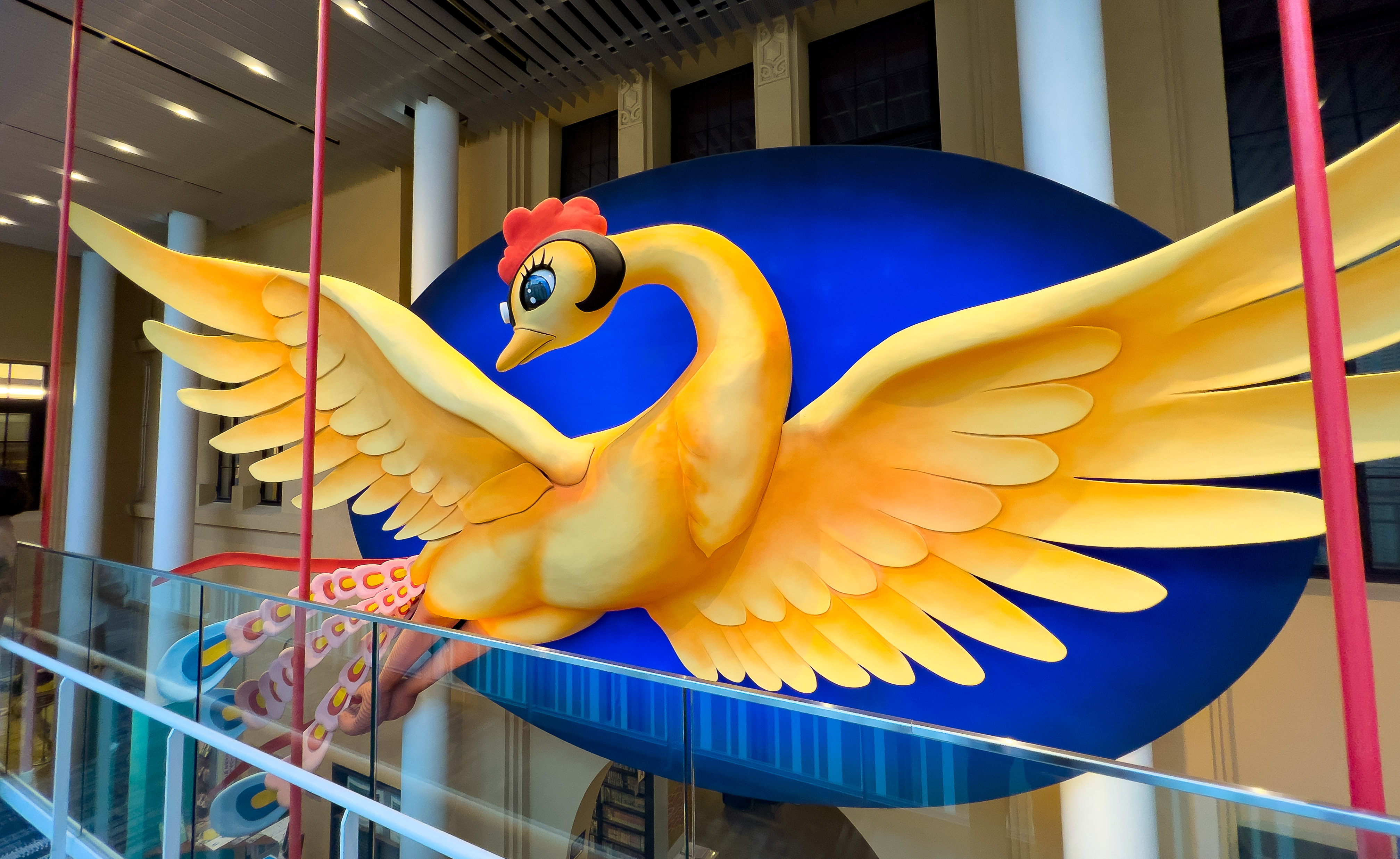 One of the biggest things on display is the Hinotori (phoenix) art project, a recreation of Tezuka’s phoenix, which watches over the museum. The phoenix, which sits at 11 meters wide and 4.5 meters tall, was made using traditional Kyoto Buddhist carving techniques called yosegi-zukuri with eyes that are reminiscent of the eyes of Buddhist statues of the Kamakura period, which were made using the gyokugan technique.

Nestled in corners of the museum were cabinets with game memorabilia in them, but not just any video games, sports games based on manga series. They had everything from cards with Touch characters on them, board games from Slam Dunk, Game and Watch-style LCD games for a multitude of franchises (they must have been popular in the late 1980s), and even copies of the Haikyu!! Nintendo Wii and 3DS games. It’s a little weird to see an original 3DS in a museum, but I guess that’s what time does.

Inside the main auditorium of the old school was, in my opinion, the most interesting permanent exhibit: the “What is Manga” exhibition/display. The walls of the massive hall were covered in manga that dated back to the 1910s, while the middle area was covered in the history of the medium, with everything from manga’s origins, its history around the world, and even how manga moved into a media mix.

The exhibition explained how manga has its origins dating back to the artistry known as Giga from the Edo period. As printing became more commonplace and serialized stories were becoming mainstream, foreign influences — such as Charles Wirgman and Georges Bigot — brought over the art of satire from their countries and started publishing in Japan. Wirgman’s The Japan Punch, as well as the influential Eshimbun Nipponchi, both had reproductions on display. 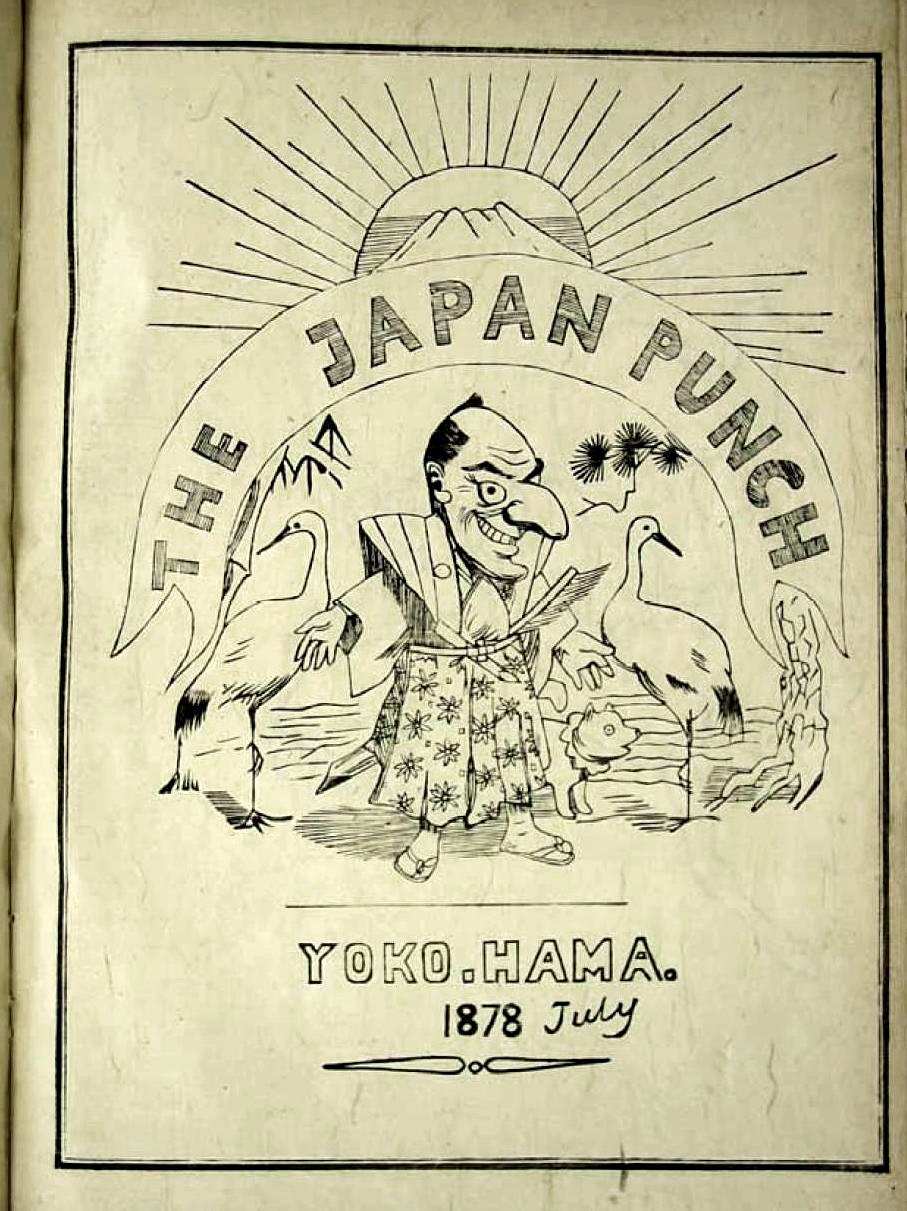 A copy of The Japan Punch

Various other areas had information on the modern manga business. With one display explaining the business of manga and how manga creators make a 10 percent royalty on every collected volume sold. Another display showed the media mix of manga, with the original volume in the middle of the display, then what it was adapted to. For example, the K-ON! manga into music CDs, Fist of the North Star into pachinko machines (with one on display!), Attack on Titan into cosplay, and a Weekly Shonen Jump magazine into the Jump Force video game.

One of the most interesting displays was the effect of international piracy on how manga spread around the world. The area had physical copies of illegally translated manga from different Asian countries and described that, despite the illegality of pirated manga, these were countries that could only get pirated versions of series due to the time period and cost involved with legally publishing manga in poorer countries. Because of this, the idea of illegally translated manga has a place in the history of manga’s spread around the world. This was, of course, before the time of digital releases and same-day worldwide translations.

In a room down the hall from the main auditorium, the hands of over 100 manga creators are immortalized in plaster. Every manga creator who comes through the museum for any reason casts their hand holding a pen and then draws an image to go on the mural in the cafe adjacent to the museum. Hands of manga creators such as the late Monkey Punch, Fujiko A. Fujio, Yuusei Matsui.

One of the more intimate displays was for the late Takao Saito, the creator of Golgo 13, who passed away in September. Saito was someone who spent a lot of time at the museum, helping shape it. There was a dedication to him on the second floor alongside a dedication to Taro Minamoto, another prolific manga creator who passed away in 2021. Minamoto was working on “The History of Manga” book with the museum but passed before he could finish it.

In the old stairway on every floor, a little nook was carved out for the “best manga of 2020,” which was chosen by the staff that run the museum, as well as friends of the museum for their impact on the industry. The area is set up to help readers find the best of the best from 10,000 new manga released during 2020. Some of the titles highlighted here were Kiyo in Kyoto: From the Maiko House, Bluelock, Call of the Night, SPY x FAMILY, and Chainsaw Man.

Along with the permanent exhibits, the Kyoto International Manga Museum has revolving exhibitions that range from human rights in manga and pre-war children’s manga to specific artists’ works. During my visit, manga creation duo Akira Himekawa’s — a pen name for the pair Honda A. and Nagano S. — The Legend of Zelda manga series’ was being exhibited. 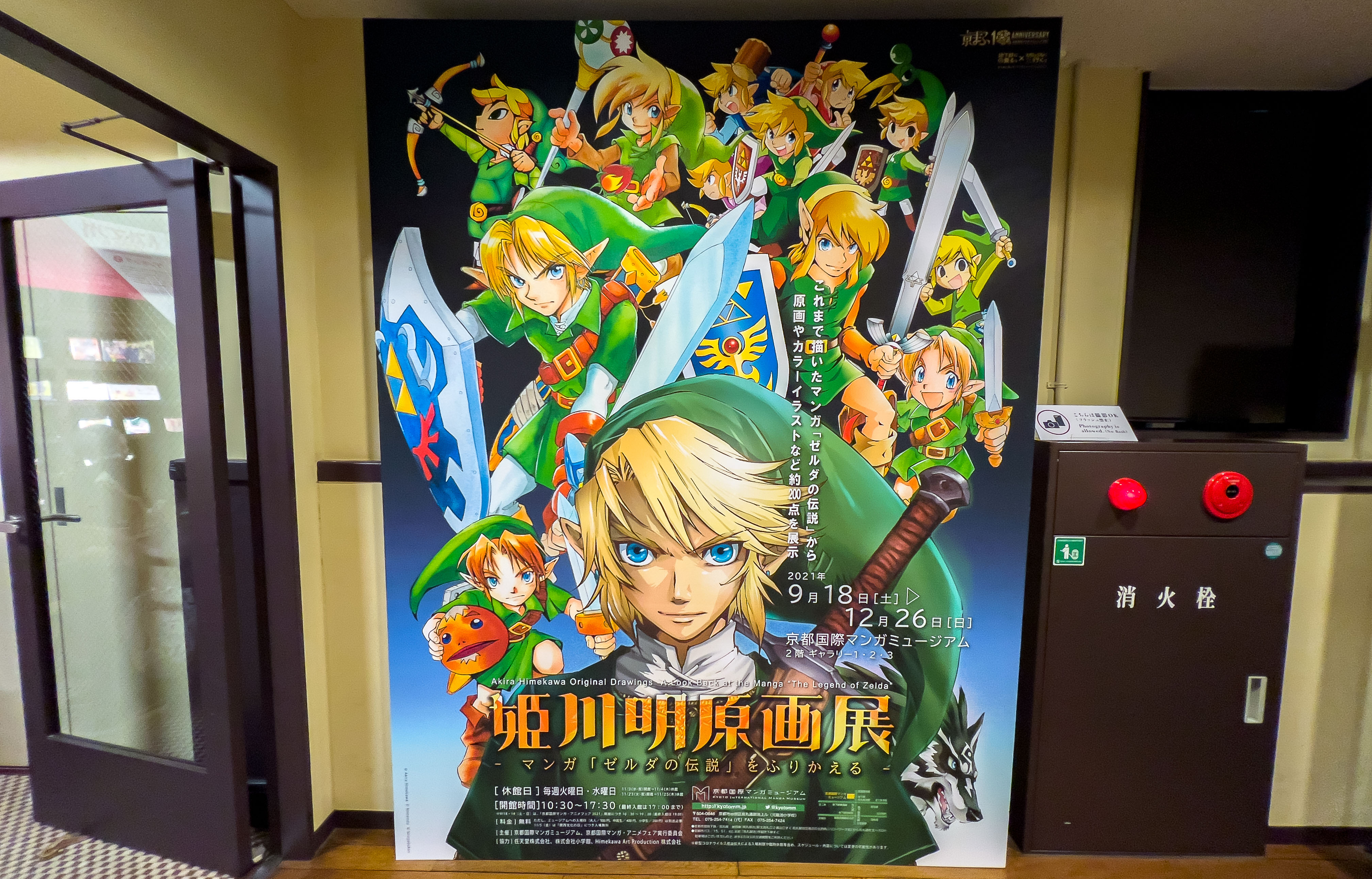 Akira Himekawa has created a manga adaptation for nearly every mainline Zelda game released since Ocarina of Time, even going back to A Link to the Past at one point for a one-shot. They rose from being fans of the series — with only a Japanese TV commercial of Link riding a horse as inspiration for their first series — to working directly with Nintendo for reference materials and even creating their own lore in Skyward Sword.

Each series had a few choice panels shown off, such as the beautiful artistry of the Great Deku Tree in Ocarina of Time or in-production pages for Twilight Princess — the duo’s latest work which was drawn using a new method. They penned it physically, mostly only doing faces and action moments, then touching the panels up on Clip Studio Paint. Both the penned and finished digital versions were on display. For the Oracle of Seasons and Oracle of Ages manga, the duo decided to use gold highlights as a shadow, including on the Triforce when it features in the story. These gold details wouldn’t even be noticed by the reader as the manga was published in black and white.

There were enough facts given about each of the series to fill a Did You Know Gaming? episode based just on the Zelda manga. Such as Himekawa only being shown in the opening scene of Majora’s Mask before creating the manga, so the duo had to come up with their own plot with just the keyword “Majora’s Mask” as a basis to make the game’s release. Or that for The Minish Cap manga, the duo was given basically all the full-quality design materials for the game before they started drawing, including all the small plants, items, and more. 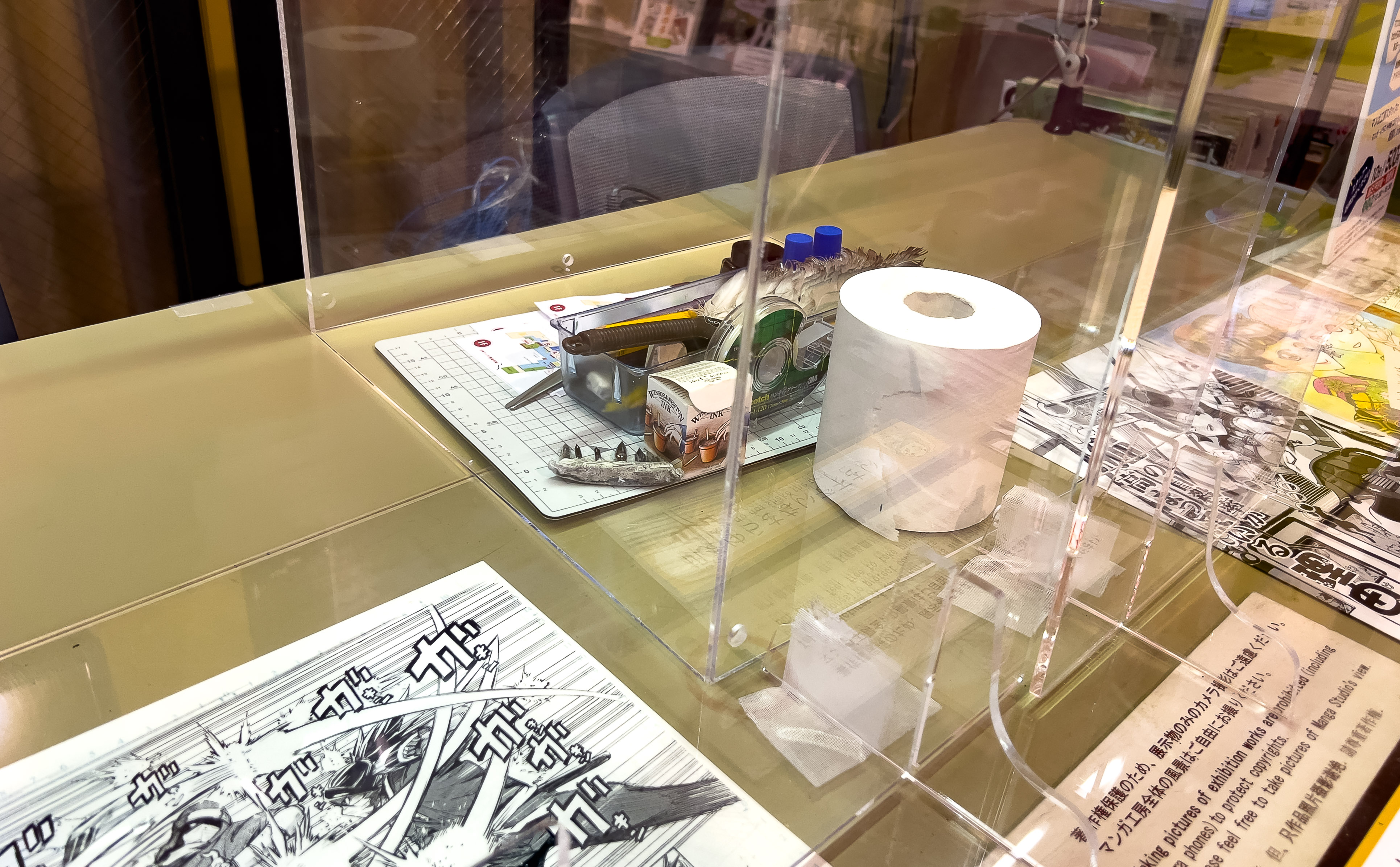 While they weren’t running while I was there, during weekends and holidays, the museum brings in manga creators to draw live, give tips, and even have workshops on how to create manga — though most are only in Japanese, with barely any English support, unlike the rest of the museum.

The Kyoto International Manga Museum is a must-visit for anyone who has even a smidge of love for the medium and wants to learn more about its history, or even its present, with the ongoing and limited-time exhibitions that look at manga and the medium’s place in the world today. 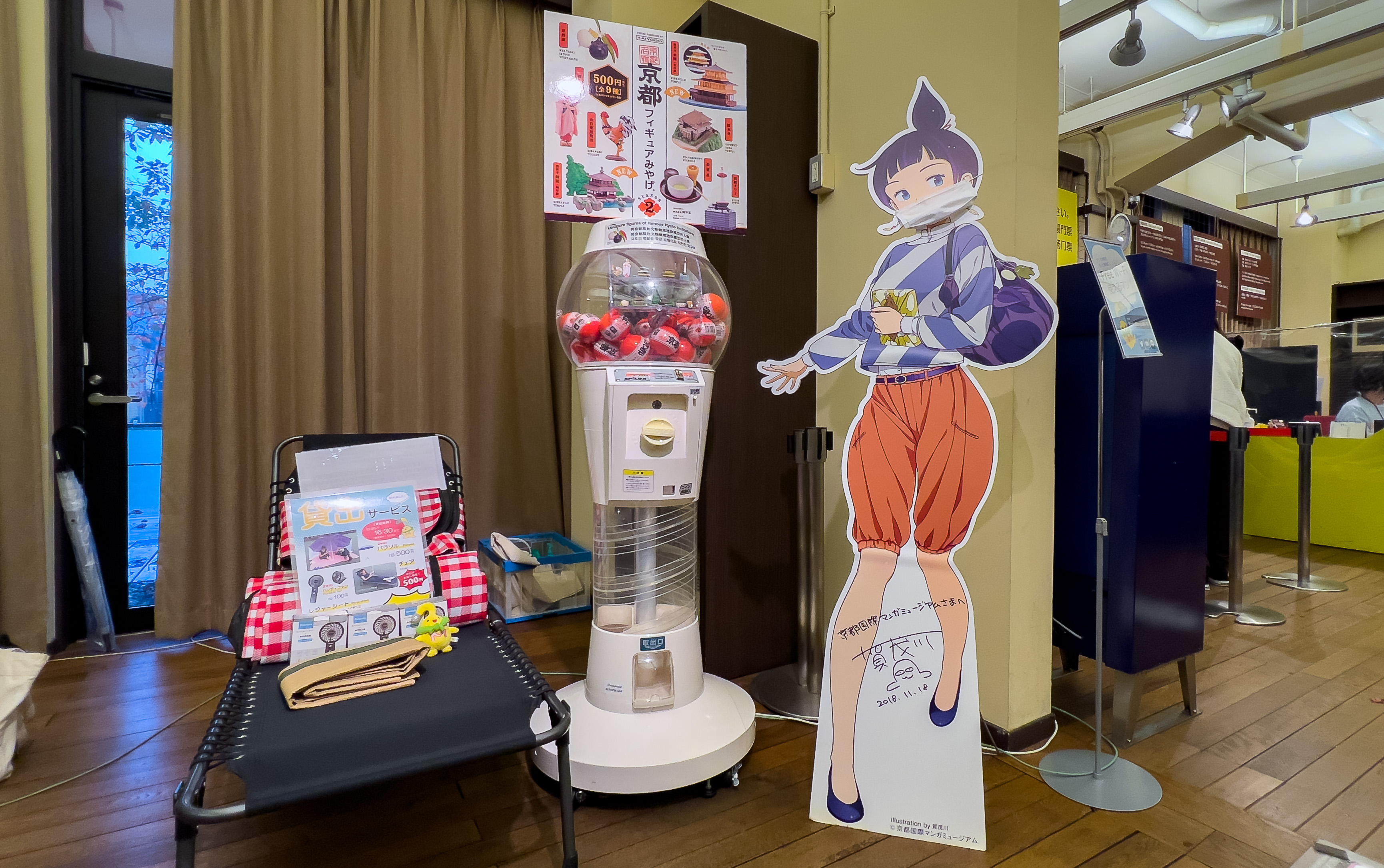