FEATURE: The Soul Of One Piece — Megumi Ishitani's Wano Episodes 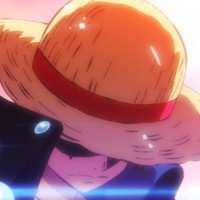 Hello everyone, and welcome back to Why It Works. Have you all seen Megumi Ishitani’s latest One Piece episode? Having already elevated a pair of Wano episodes into the stratosphere, expectations were high for episode 1015 and she still managed to blow them all away. Ishitani’s ability to turn manga panels into heart-throbbing cinema is second to none, and beyond that, her understanding of when to go beyond the original panels marks her as a unique directorial talent, someone who can evoke the spirit of a work through her own spin on the material. 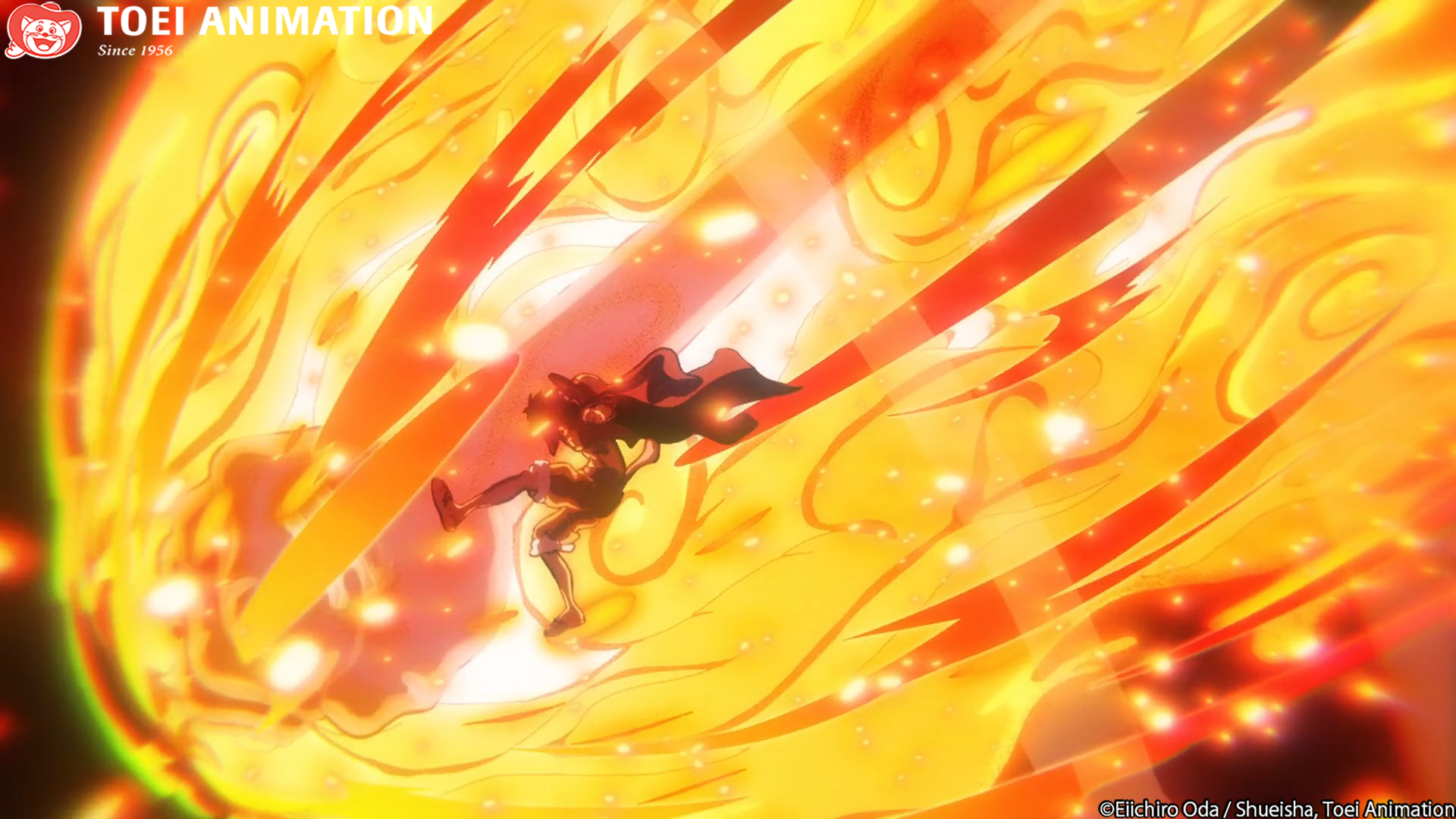 There’s a reason Ishitani is generally called on to handle “transition moments” rather than big action payoffs. It is in these moments where the most flexibility of interpretation can be found — when strings of related exposition can be drawn from a vast swath of material and reconstituted into a quasi-original short film. A deeply uncharitable viewer could even refer to this material as “filler,” but to my mind, it is very close to the opposite. Ishitani’s work represents brief moments of One Piece being illustrated as original film rather than adaptation and appropriately borrows a great number of techniques from live-action cinema. Today on Why It Works, I’d like to break down just a few of Ishitani’s borrowed techniques and go some distance toward demystifying the profound “wow factor” of her work. 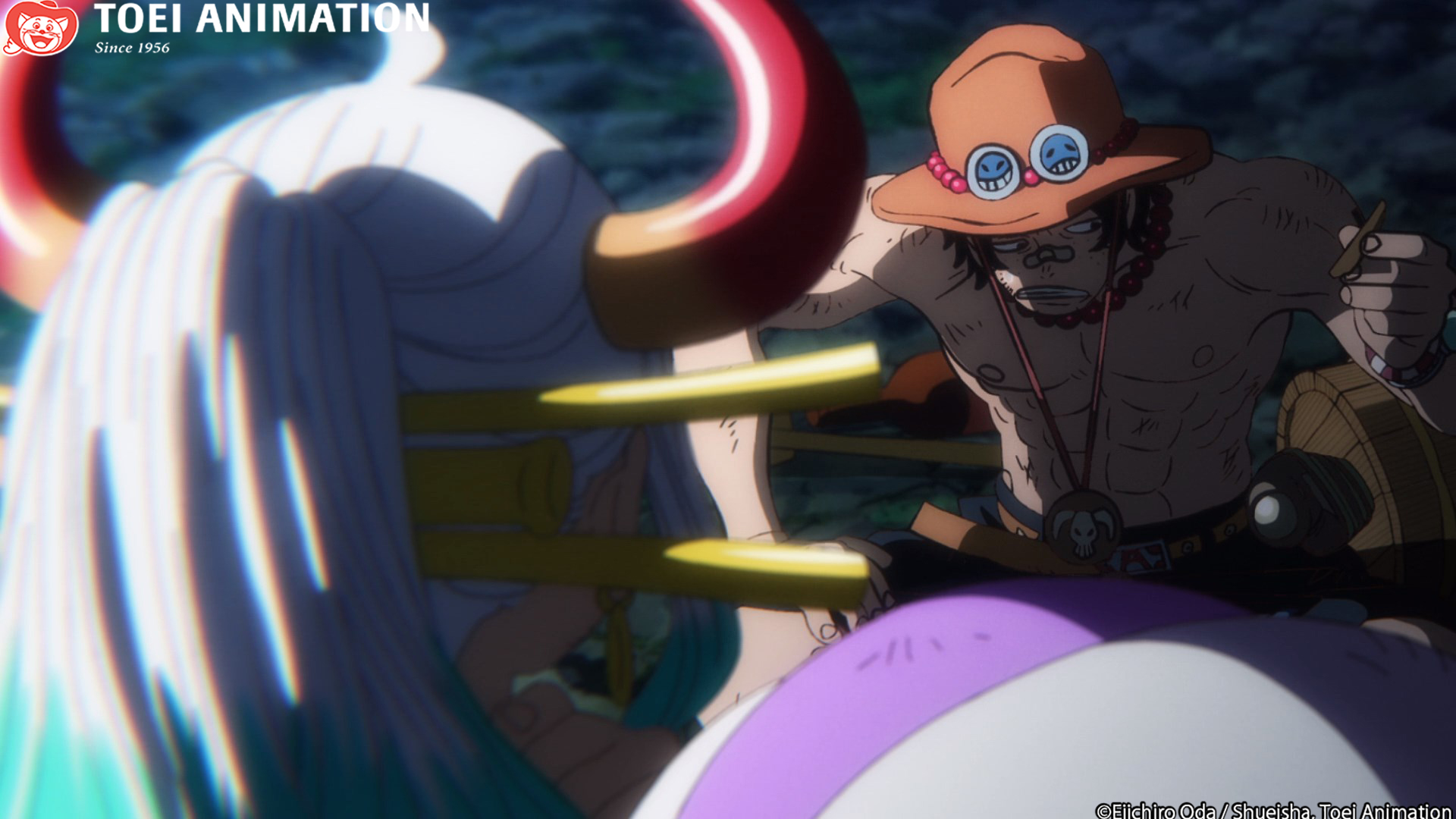 One of the most distinctive underlying qualities of Ishitani episodes is the way everything flows from one moment to the next. There is a continuous sense of momentum in her episodes, a feeling of energy that’s preserved throughout — and a great deal of that effect comes down to her exploitation of focal control. Imitating the limited focal range of a traditional camera, Ishitani’s episodes will frequently begin with just the foreground or background in focus, then reverse this effect — a technique known as “racking focus,” which naturally draws the audience’s eye toward Ishitani’s target. Even in shots when the focus doesn't actually shift, Ishitani will frequently employ an unusually narrow depth of field, keeping the eye drawn toward specific elements of the composition while emphasizing a sense of distance between foreground and background. Through exploiting both camera movement and focal control, Ishitani is able to create a sense of momentum even in a largely still composition, building a sense of true depth in the composition at the same time.

RELATED: How Does One Piece Keep Both Its World And Its Drama So Big? 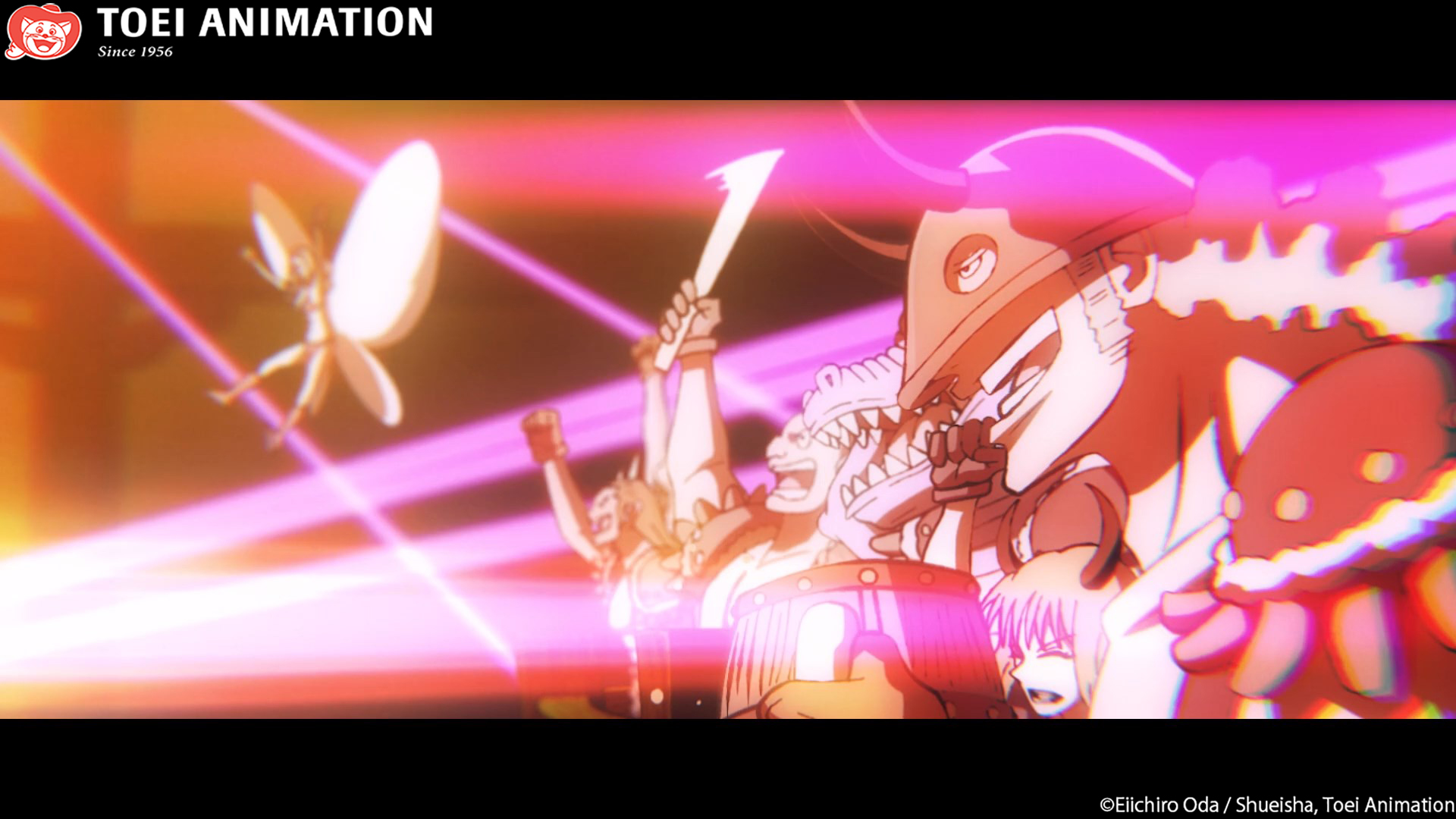 Along with this cinema-derivative camera manipulation, Ishitani’s episodes are lit like nothing else in One Piece. Some of her lighting tricks fall in line with her focal manipulation, intended to evoke the unique quirks of live-action shooting. When panning up into a glorious sunrise, the “camera” might end up overwhelmed by the glare, or even augmented with a lens flare, light bands, or the motes of out-of-focus light known as “bokeh.” At other times, the lighting will be used to enhance the drama in a more deliberately theatrical fashion, with stage lights or dramatic shadows drawing the eye as effectively as her focal tricks. By employing both the quirks of traditional camera lighting and the freeing potential of anime presentation, Ishitani is able to make lighting a driving force of the drama, our emotions rising and falling with the shadows on the stage.

A World Of Color 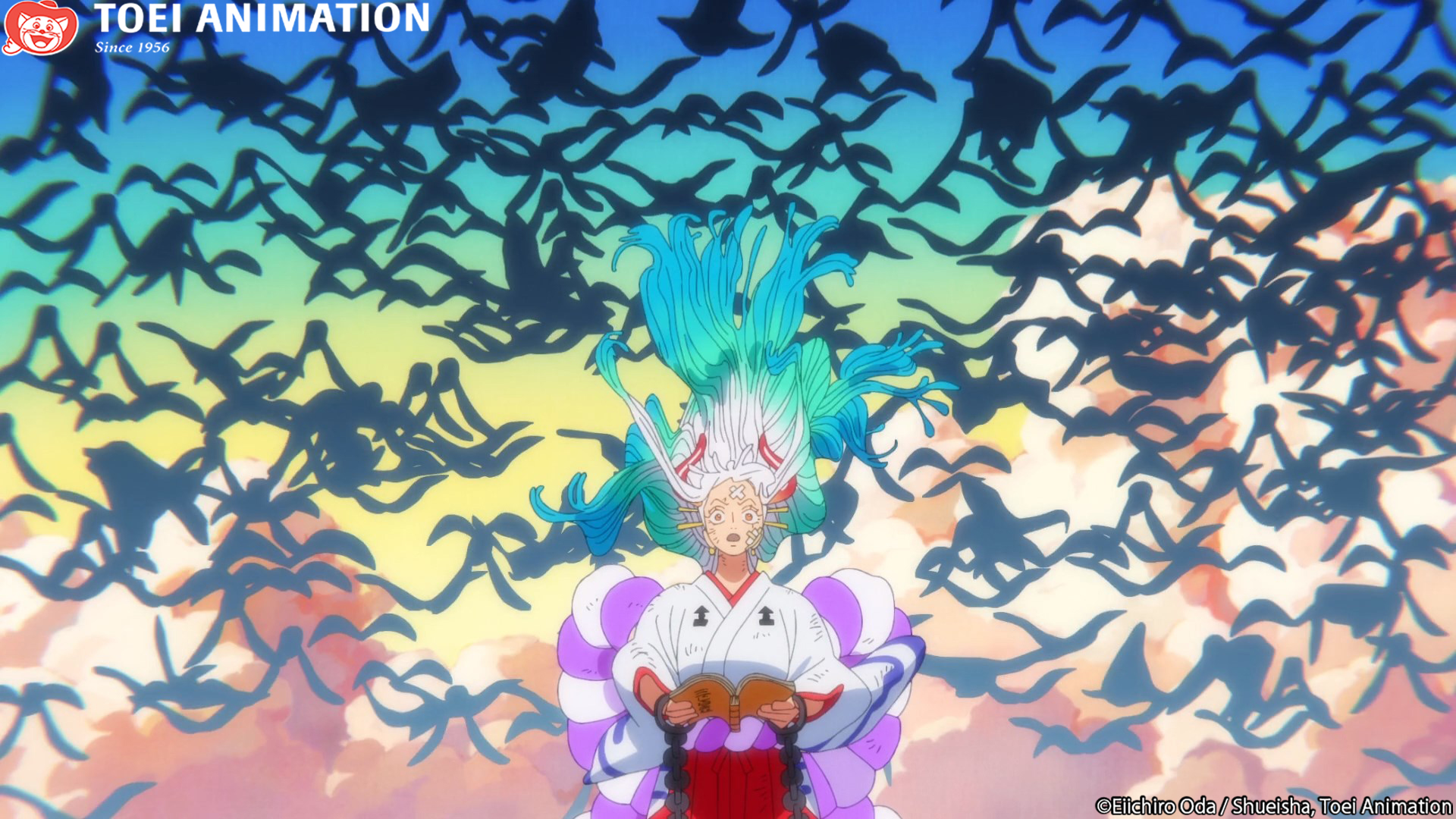 Wano in general has seen One Piece embrace a far richer spectrum of color, dispensing with early arcs’ full color fills in lieu of rich, varied violets and reds. But as with Wano’s other innovations, Ishitani’s episodes take this tendency to a whole other level, exulting in rich gradations of color that make best use of her equally heightened lighting. With colors this rich placed right next to each other, Ishitani takes the further step of embracing chromatic aberration, that “color fringe” or halo effect prompted by a camera not quite capturing two colors’ dividing line. And just as her lighting embraces both the quirks of traditional cameras and the infinite potential of animation, so does her color design — she’s perfectly willing to embrace even single-color compositions if they serve her purposes, as in the crimson-drenched introduction of the Tobi Roppo or Yamato’s idyllic visions. Thus we see again that Ishitani’s embrace of cinematic technique is not a philosophy in its own right, but simply a willingness to use whatever tools serve her purposes, be they ripped from traditional cinema or native to animation. 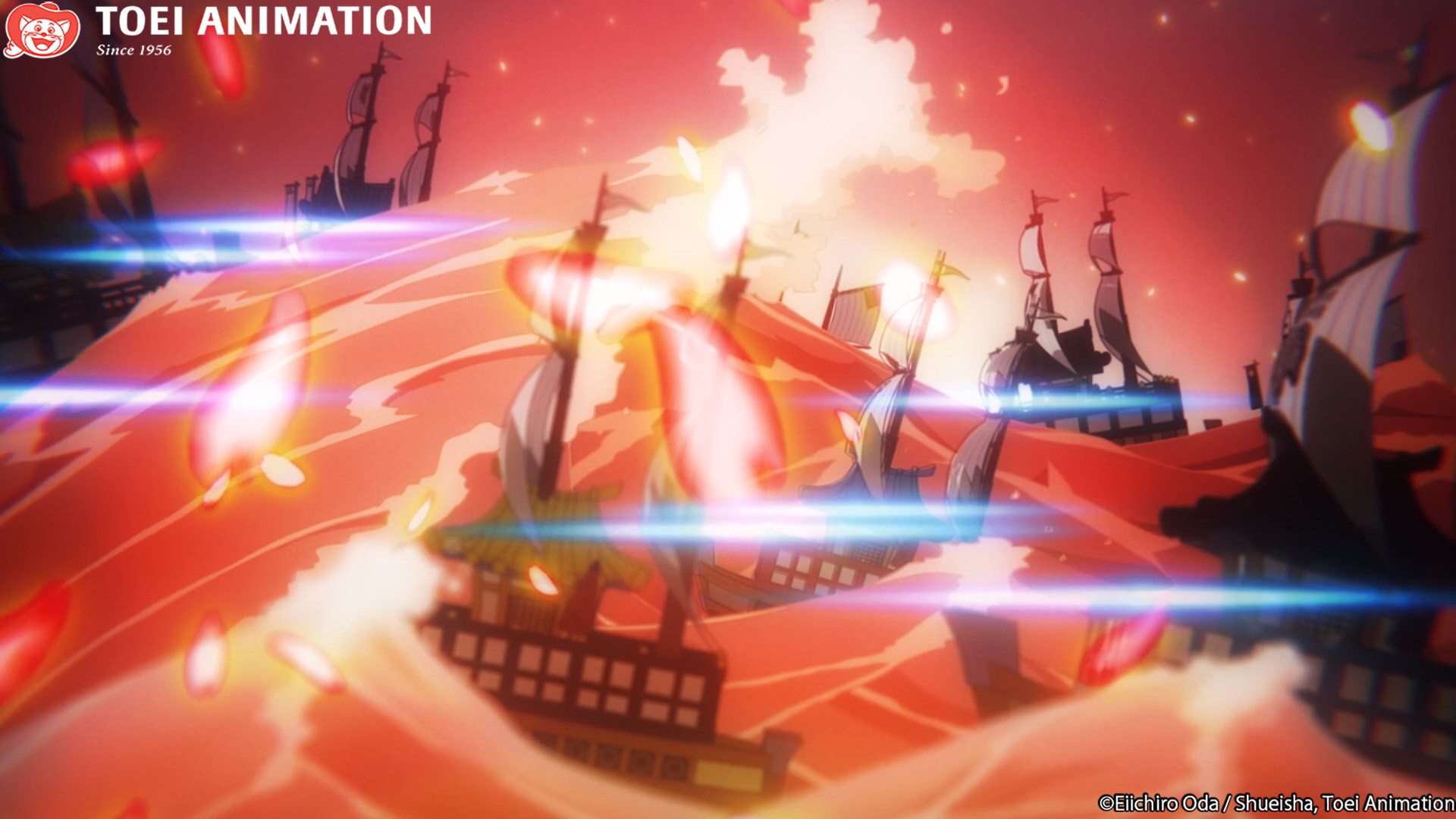 A quality shared by Ishitani’s One Piece episodes is that they never cover one single, continuous event. Generally set at the boundary lines between different stages of the narrative, her episodes see the drama swooping through a dozen quick perspectives, attempting to draw the disparate threads of One Piece’s complex narrative into one coherent, evocative emotional thrust. As a result, her mastery of active transitions is absolutely essential to her episodes’ impact. Just as the camera is active within single scenes, so does it carry momentum between them, with wipe cuts often matching their slide to the movement of characters. Ishitani’s fondness for symmetrical compositions also facilitates a variety of clean transitions, allowing for fade cuts that wordlessly draw parallels between linked characters or concepts. That love of heightened, gleefully staged drama is made clear through her embracing of ornamentation like title cards and aspect ratio switches, as during Queen’s Onigashima performance.

RELATED: Remembering The Immaculate Vibes Of Early One Piece 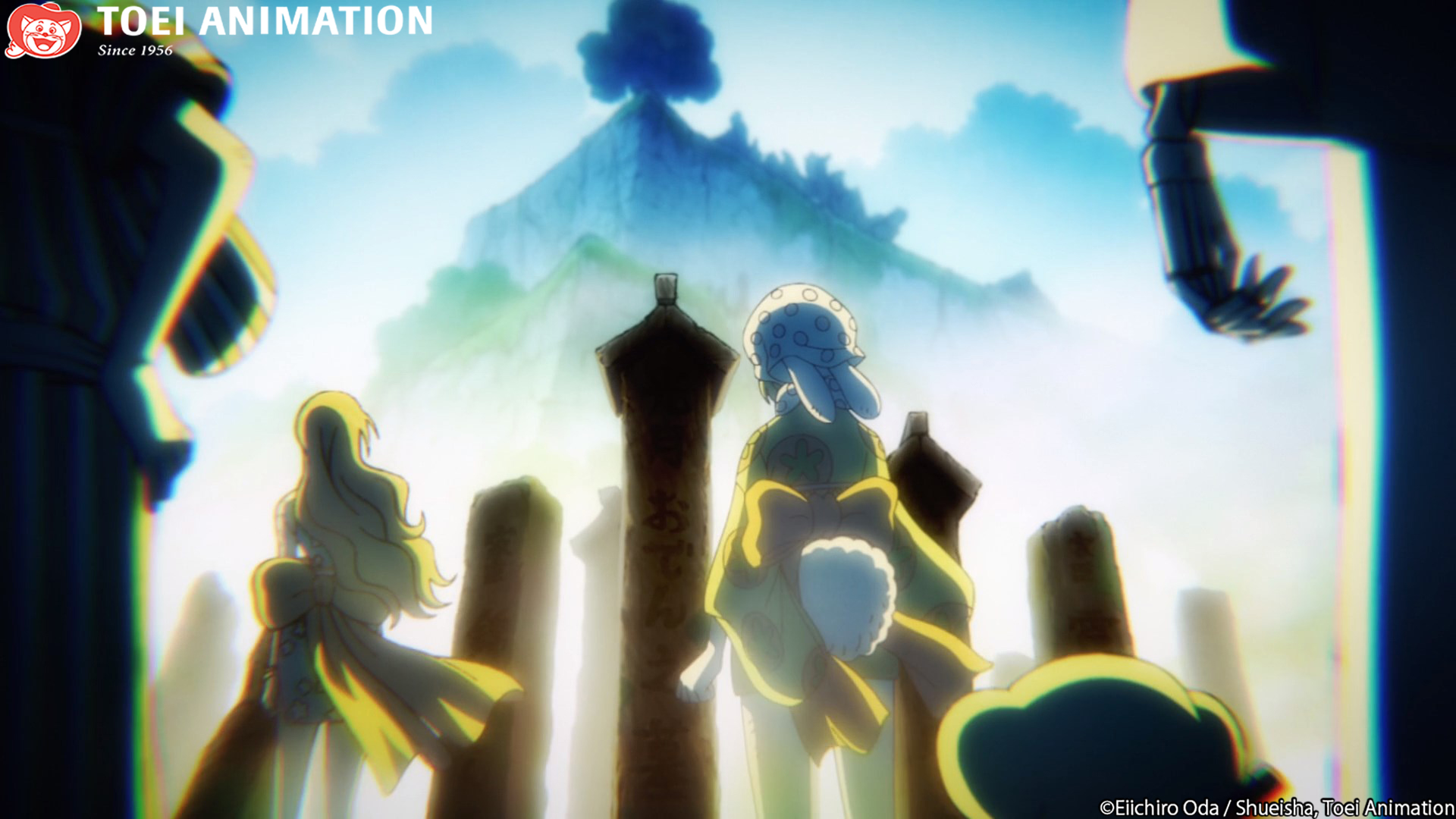 Of course, manga panels aren’t inherently designed for these tricks of lighting and focus. It’s thus not terribly surprising that Ishitani’s episodes largely dispense with panel-by-panel adaptive loyalty, and instead construct camera-ready compositions from the ground up. Rather than the often flat look of loyal manga panels in motion, Ishitani’s compositions are built from the ground up to facilitate zooms, pans, and focus shifts. Perhaps her most iconic style of shot is entirely native to cinema, wherein she embraces the parallax effect of foreground and background objects moving past a panning camera at different speeds, a visual embodiment of both how she turns presentation into action, and how she draws different narrative threads into one aesthetically unified whole. This is not just Oda’s manga in motion, this is Ishitani’s version of One Piece, a drama built from such a keen understanding of the source material that while individual panels might be lost, the soul of the material shines through all the more brightly. 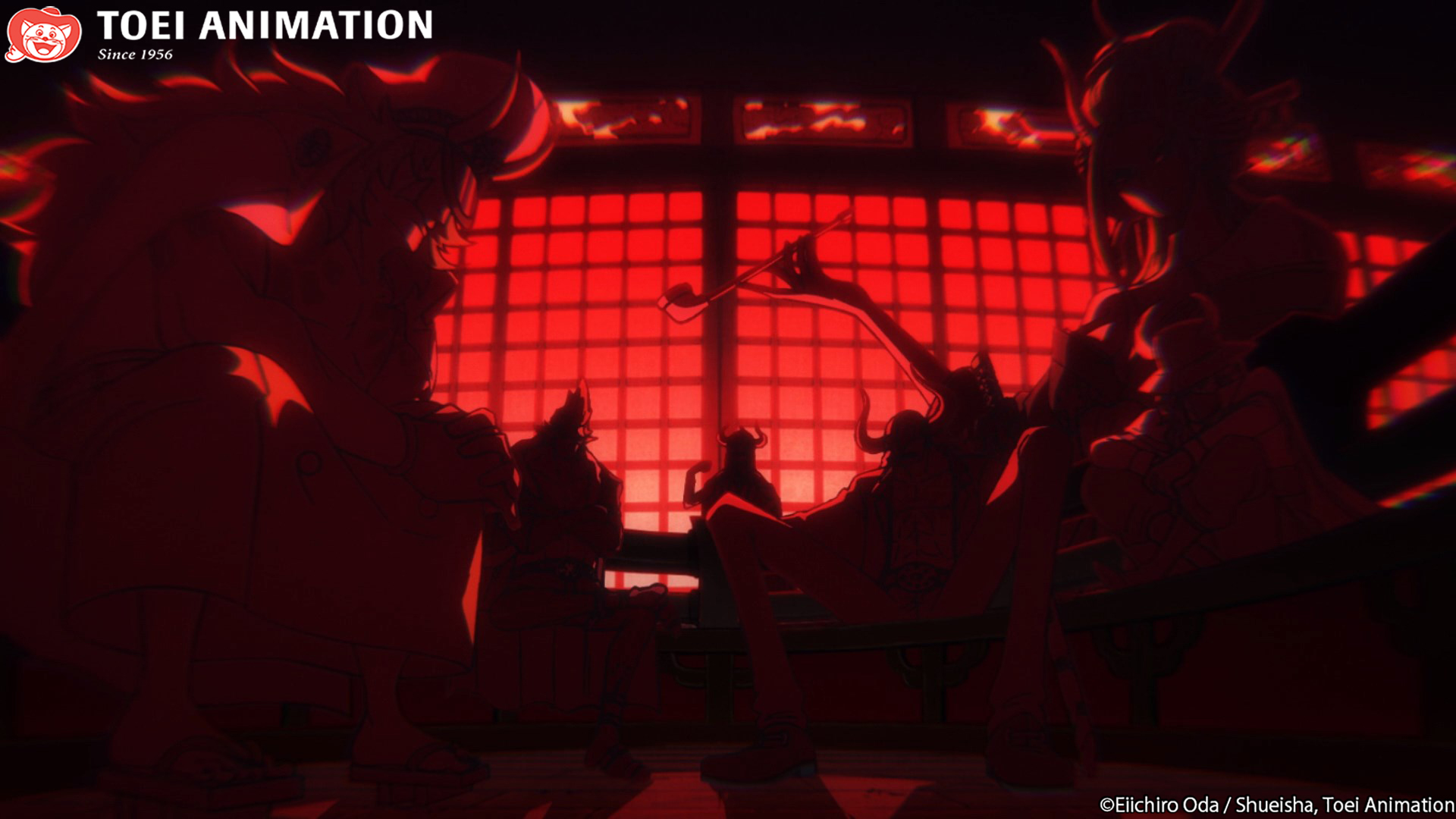 I imagine you’re seeing a theme emerge across these various aspects of Ishitani’s work. The defining quality of her episodes, the ethos that makes her work so great, is that loyalty to panels is far less crucial than capturing the spirit of the work and using the tools of your own medium to the best possible advantage. Through reshuffling and embellishing the raw material of these moments, Ishitani turns transition sequences into exultant celebrations of the One Piece world, embracing the defining strengths of both animation and cinema in the process. What’s more, Ishitani’s approach facilitates a greater freedom and sense of collaboration from individual animators, who are free to realize character body language or shift perspective in scenes designed for just such purposes, rather than adapted from still poses. 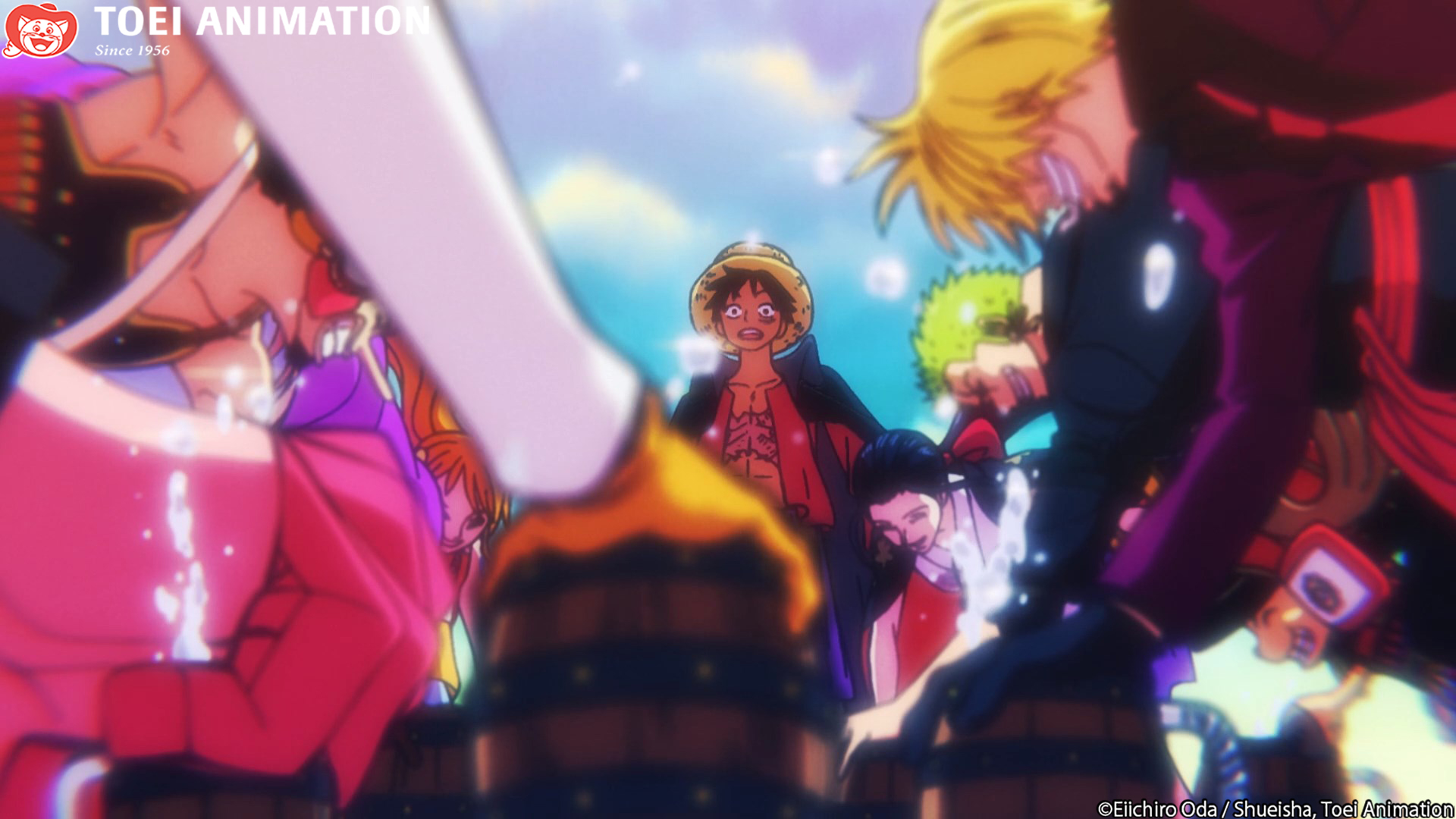 We are accustomed to seeing a show’s action highlights break free from manga loyalism and embrace the idiosyncratic, animation-native strengths of a particular ace animator (see basically any of Yutapon’s My Hero Academia cuts). But in Ishitani’s One Piece episodes, we see a distinctive directorial vision applied to uniformly elevating all of the story’s drama, be it combat-focused, solemn and intimate, expository, or otherwise. The results are stunning on their face and provide a convincing argument for the importance of holistic elegance in every aspect of a story’s design. They are a marvel and a mission statement in one, and I can only dream of what this director’s future holds.

Tags
why it works, one piece
« Previous Post
Feel the Heat of Battle in The Rising of the Shield Hero Season 2's Latest Visual
Next Post »
The Duke of Death and His Maid Confirms 2nd TV Anime Season for 2023
Other Top News
17 Comments
Sort by: