The infamous episode of the original Mobile Suit Gundam is now a movie! 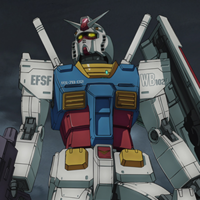 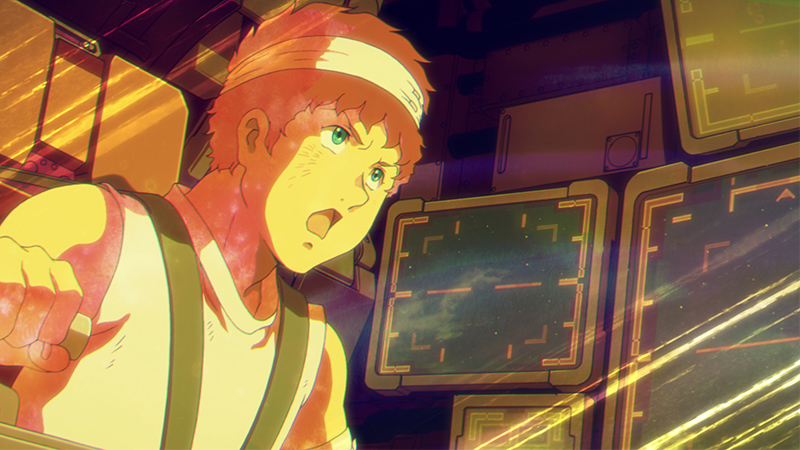 Have you heard of the Streisand effect? It’s the idea that, when an attempt is made to hide something from public view, the act of trying to hide it only brings it even more attention. Mobile Suit Gundam: Cucuruz Doan’s Island is the giant robot encapsulation of this effect in action. Attempts to strike this infamous episode of the original Mobile Suit Gundam from history have instead made it so infamous we now have a brand-new feature film remaking and expanding its story.

We may never know the true reason Yoshiyuki Tomino requested the removal of this episode from later broadcast and home video releases, despite speculation (The only English subtitle available format of the episode currently exists in the UC Libraries Blu-ray release of the series). Whatever the reason, its conspicuous absence and references in other works only made it more infamous, eventually leading to a manga retelling of the story in 2016.

Now, Gundam series designer Yasuhiko Yoshikazu stepped in as director for an unusual opportunity to right the wrongs of this original episode by recreating it as a feature film. Without the mysteries that have intrigued fans for decades, does Cucuruz Doan’s Island offer an engaging story worthy of its outsized presence in franchise history? 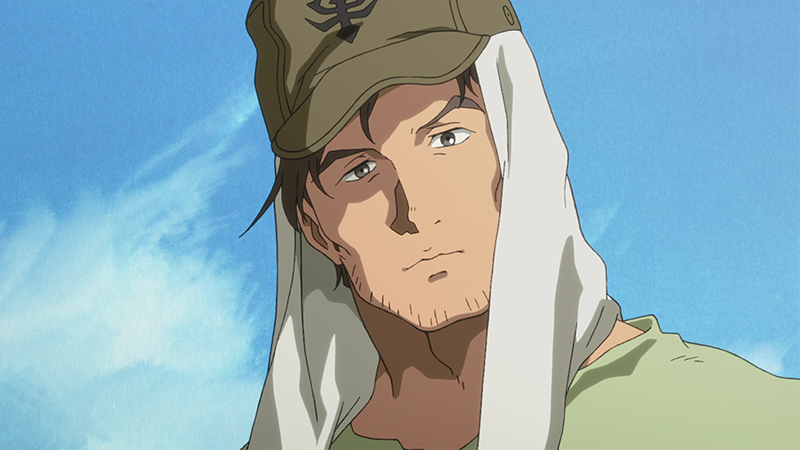 The movie picks up chronologically from the events of Episode 14 of the original series, with the Earth Federation Forces planning an operation to capture Odessa. Just before their planned departure to Belfast for resupplying, new orders arrive requesting the crew wipe out stragglers on a seemingly uninhabited island. Amuro lands and is immediately attacked by a lone Zaku, causing him to lose his machine and ability to contact his crewmates as he comes into the care of a group of orphaned children and a man named Cucuruz Doan.

Before it was struck from the public record, this episode offered a unique perspective on the conflict with Zeon. This was the only original series story to center characters neutral to the war, allowing an opportunity to see the impact of the war born disproportionately on innocent civilians. Although Cucuruz Doan was once a member of the Zeon forces, seeing the orphans his actions created led him to defect, preferring a secular life caring for his victims. While stories such as Mobile Suit Gundam: Iron Blooded Orphans have considered how war impacts the impoverished, innocent and forgotten, this was the first time the series broadcast the horrors of war through the eyes of the powerless and disinterested. 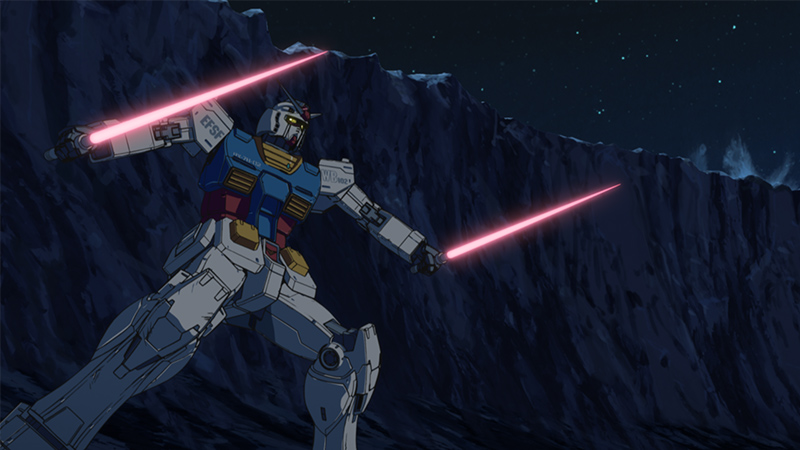 Just like the original episode, the movie is disinterested in the conflict beyond the waters of this island. For much of the story, Amuro isn’t the pilot we’ve come to know and admire. Without his Gundam, he is as lost as the other inhabitants, unsure of his purpose with his role in the war seemingly gone. How did these kids find the strength to move on in spite of what the world has thrown at them?

The film’s longer runtime allows more time with the children to learn about their new home. Indeed, this film is at its best when mobile suits are replaced by a character drama about a found family brought together by war. Unfortunately, Cucuruz Doan’s Island is saddled by a franchise far larger than one story and its existence as filler in another person’s story. From the moment the opening credits remind us this is a retelling of Episode 15, the film makes every effort to tell us how little anything matters. Sure, Amuro can assist this family and we can learn why Doan defected from the enemy, but nothing can fundamentally change as the war marches forward. 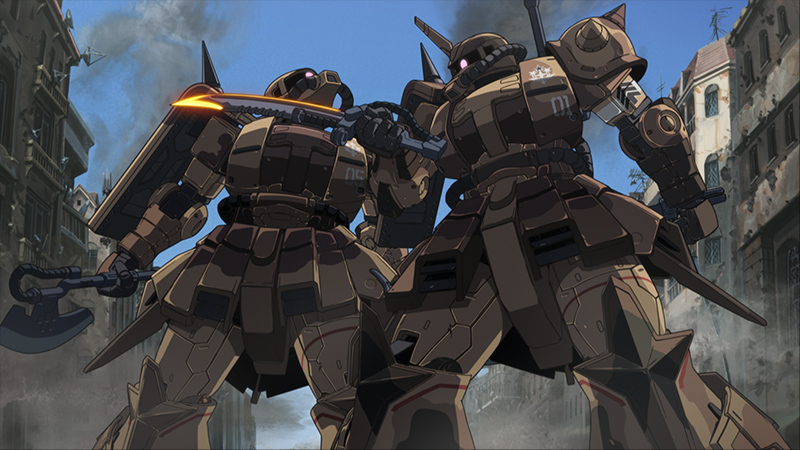 To ensure we know our place, story beats about the island’s inhabitants are interrupted by reanimated flashbacks and discussions of future plans we never get to see. They exist to tie the film into the chronology of the series but distract from the far more interesting story at its heart. Cameos and character dynamics established in the original series are not reintroduced for the forgetful or uninitiated, only further diminishing the ability to enjoy this movie divorced from the context of the original series.

There are consequences to this approach. Planning an original anime for TV broadcast in 1979 means creating content for the diehard fan and the casual viewer who may watch at random and wish for a satisfying viewing experience disconnected from a larger story. When creating a movie 40 years later, you have a captive audience from the moment they walk into the theater. Why stick so strictly to the original script? With a unique opportunity to remake the episode, why not divorce it from its source material entirely? 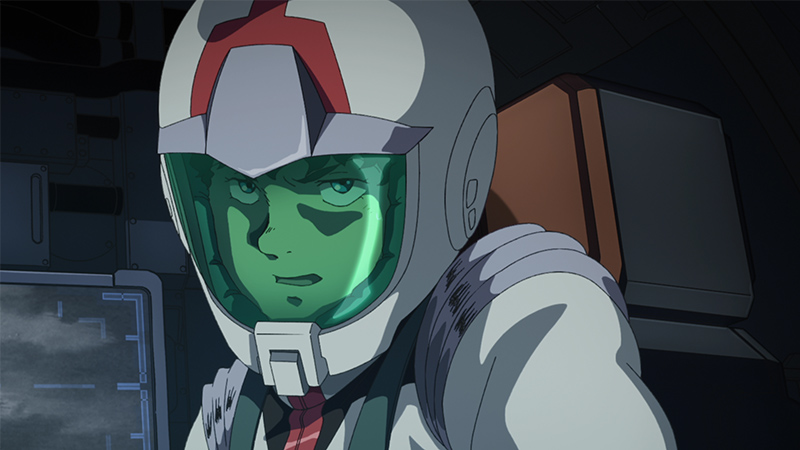 It’s hard not to feel this is a decent movie held back by the potential of something greater. Rather than create a remake designed to fill an artificial gap, you could instead create a standalone story inspired by the events of this "lost" episode. This could allow the film to focus further on the trauma these children overcome in their new, more peaceful lives and the difficulties of creating life in a world determined to destroy it. A rigidity to routine limits the thematic depth of the story, while such a conservative approach to new content when expanding a story from 20 minutes to 120 minutes hurts the pacing as the film drags the story beats beyond what is reasonable.

Relief, not satisfaction, meet the credits as they begin to roll.

I’m still glad Cucuruz Doan’s Island exists. There’s still much to appreciate about this story, not least the visual appeal of the film, while freeing the notorious episode from purgatory offers a fascinating insight into one of the franchise’s earliest attempts at broadening the scope of its universe beyond Amuro and The Red Comet. Yet in this state, shackled to a larger story, it’s difficult to recommend the movie to anyone other than franchise veterans when later Gundam stories handle this story far better.