FEATURE: What Will DALL-E Mini Do With These 12 Anime-Related Prompts? 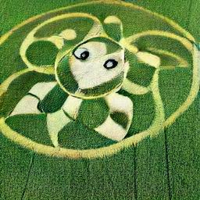 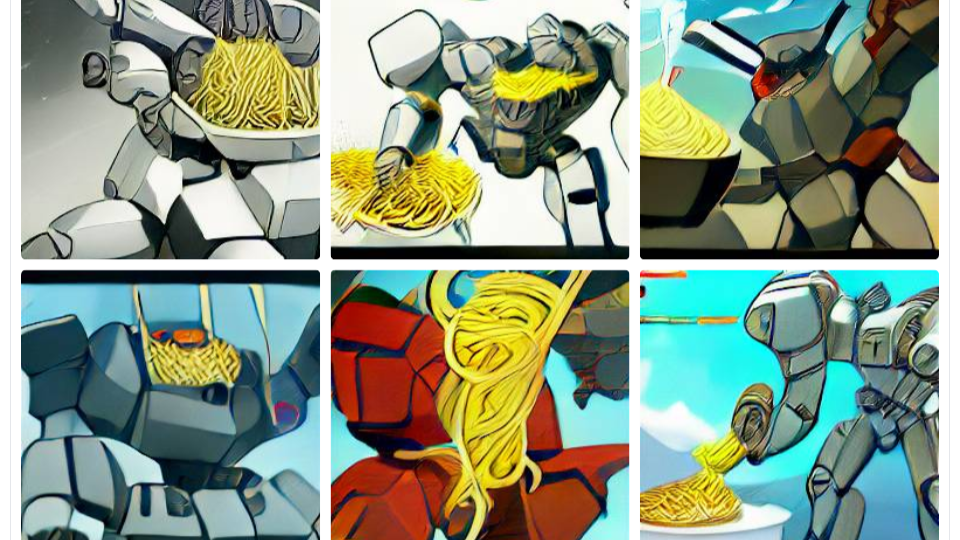 In case you’ve somehow managed to miss it, over the past few weeks people have been generating funny and absurd images using DALL-E Mini, an online program that takes whatever you input into its search bar, assumedly looks up results on Google Images or the like, and tries to make a composite image based on what you tried to search for.

On the surface, it seems harmless enough. But with some creativity, you can get utterly ridiculous results from searches like “Bottle of ranch testifies in court.” Personally, I’ve found this to be one of the most hilarious memes in recent memory. Normally I’ll chuckle at a meme and move on, but almost every time I see something from the @Weirddalle Twitter account, I stop to outright cackle at it.

So with that in mind, I opted to try it out myself, specifically with an anime twist. What does DALL-E think of anime and all the tropes and characters therein?

Well to start out, let’s go as basic as possible and search for “Anime.” A lot of the humor from DALL-E tends to be in the absurdity of the initial searches, so I’m not expecting much, but let’s see what pops up. 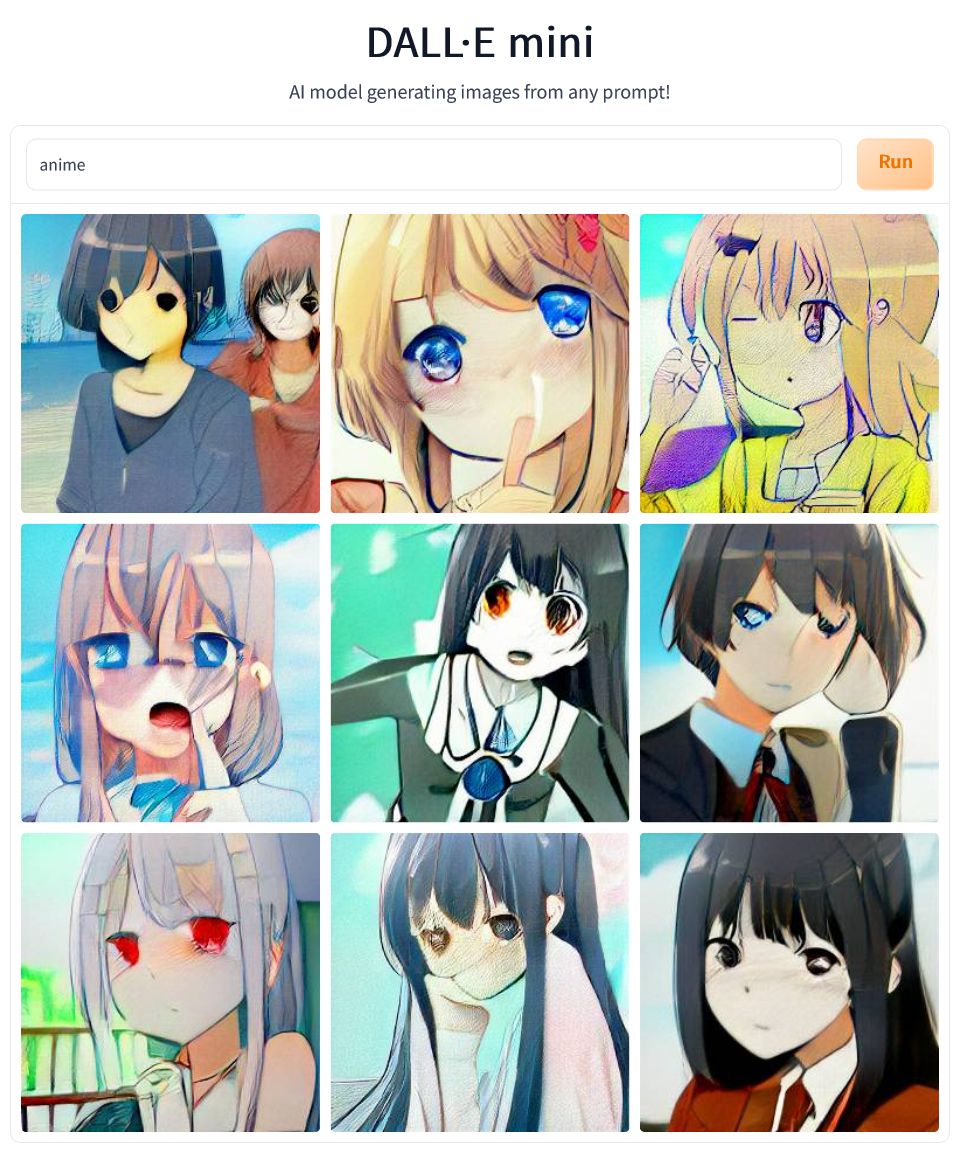 Okay, lesson one: DALL-E does NOT like anime faces. Especially the eyes. Honestly, I don’t have a way to get around that, so buckle up for that to be a continuous aspect of these images.

Lesson two: DALL-E kind of knows how to differentiate real life from an anime art style, but not really. It seems to be trying for an almost paper cutout art style to reconcile the difference. I actually kind of like it, but Puella Magi Madoka Magica’s also one of my favorite anime, so it could just be me remembering the various Witches’ labyrinths.

Lesson three: Of all things, anime hair seems to get through just fine. Maybe because it’s so large in the picture that it’s easy for the program to figure out how to keep it? Let’s try something that focuses on that, “Broom with anime hair.” 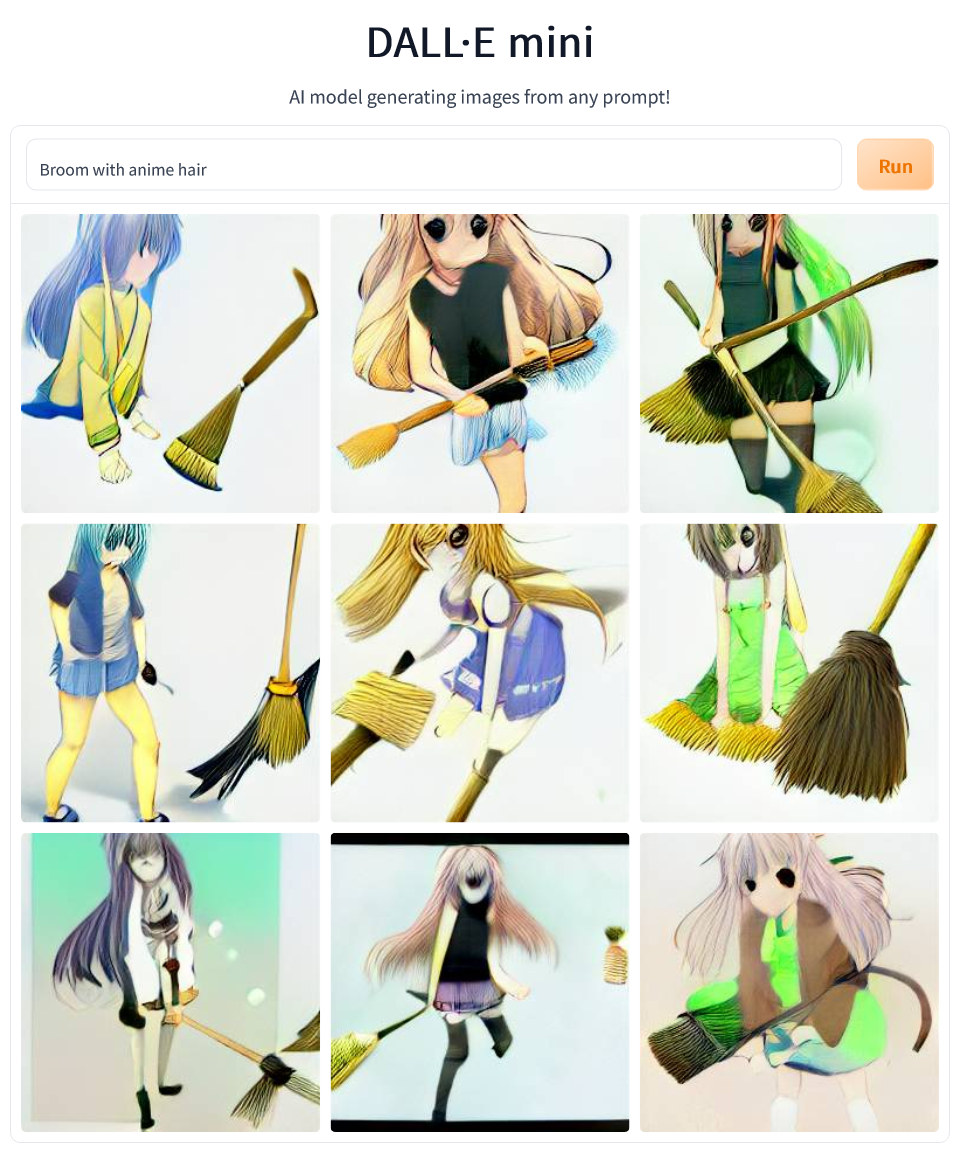 Huh. Okay, full transparency, I also tried “Anime hair on a banana” and “Anime hair on a potato,” and all three had similar enough results. For some reason, DALL-E can identify the hair, but can’t seem to remove the character. So instead of a boom with its head replaced with crazy spiky anime hair, it looks more like some girl is using a broom in an anime with a really unique art style.

I actually tried testing this a bit further later by searching for just “anime hair,” and the program was able to clearly create anime hair that would fit onto an otherwise bald head, so I have no idea what the issue is.

Honestly, not a super promising start. It’s strange, but more in an analytically interesting way. Let’s get weirder and try to make something that DALL-E can work with. “Brooding anime ninja staring through a hotel peephole.” 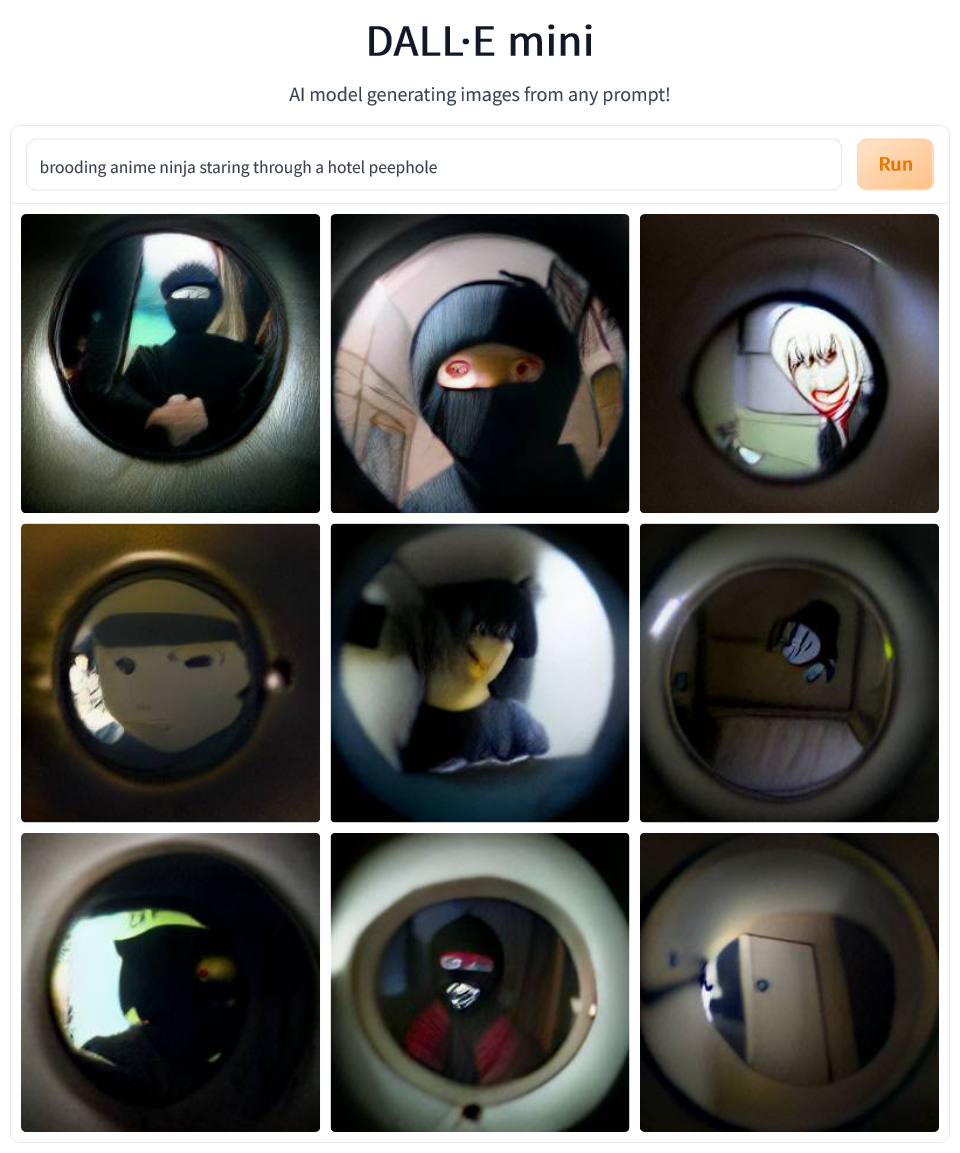 That’s more like what I wanted to make! Still far from the most cursed images I’ve seen (well except for the top middle. That one’s going to haunt me), and DALL-E’s still having trouble figuring out faces, but otherwise it’s honestly pretty spot on. I also love that it somehow managed to figure out to use characters from Naruto, but couldn’t decide whether to use Naruto or Sasuke (middle left, and dead center, respectively)

So adding some extra modifiers seems to be how to make DALL-E give better results. Before really diving headfirst into that, I want to check a couple of anime cliches and see what it comes up with: “Anime school uniform” and “Where the protagonist sits in a classroom.” 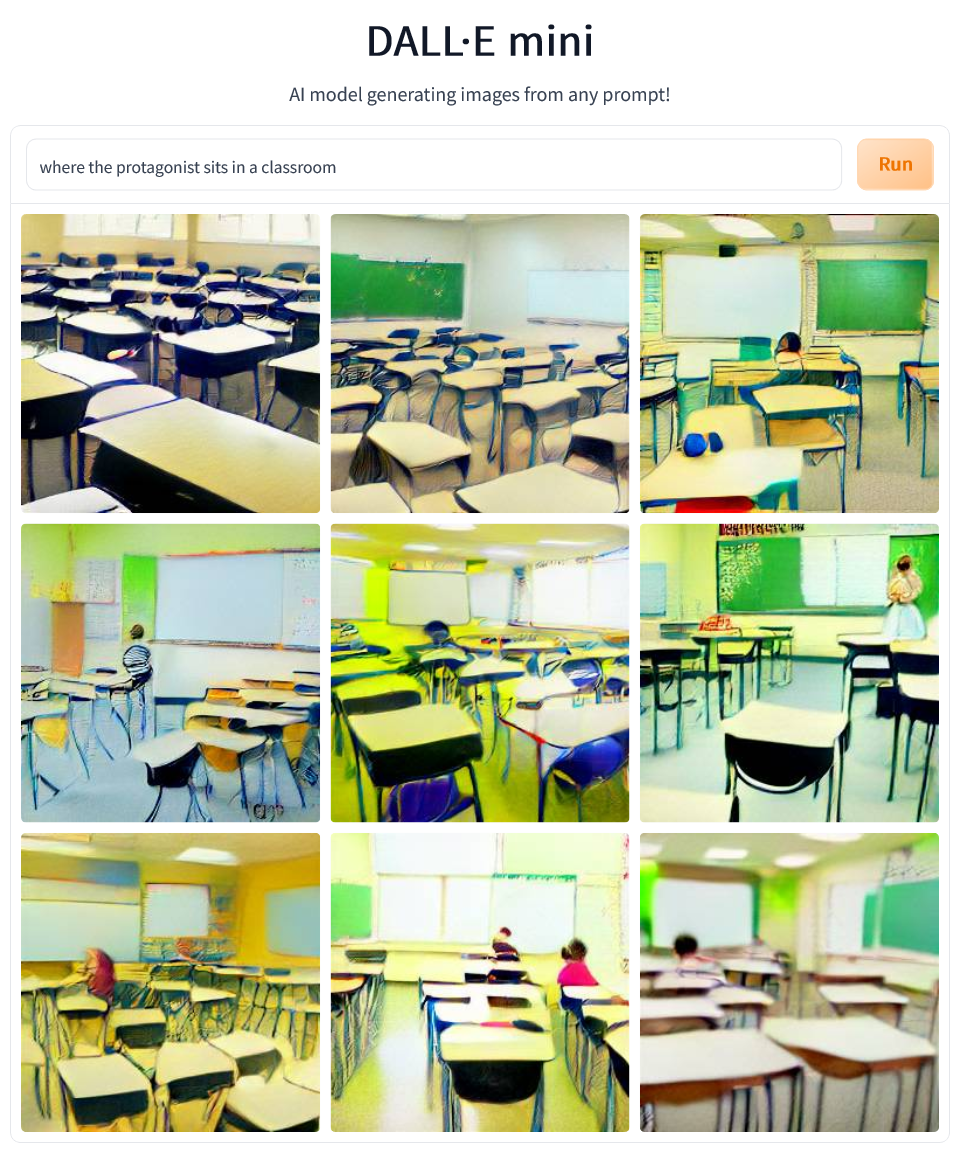 I’m actually a bit surprised at the protagonist seat one, largely because of how detailed it is. I was expecting the usual shot from near the door, looking towards the back corner to frame the right seat while showing off as much of the room as possible. Instead, we got essentially a POV shot of the seat, showing how the classroom looks from the protagonist’s perspective. It’s not really funny, but it’s super interesting!

Then combining the previous two together, there’s the school uniform one. I’m fascinated to know what kind of logic went into making those images because you can see that I only searched “anime school uniform,” which is obviously a pretty broad category, but DALL-E came up with mostly the same uniform over and over again, and specifically the female version of those uniforms.

OK, with my own curiosities indulged, let’s get back to making some absurd ones. “Spaghetti getting into a mech fight.” 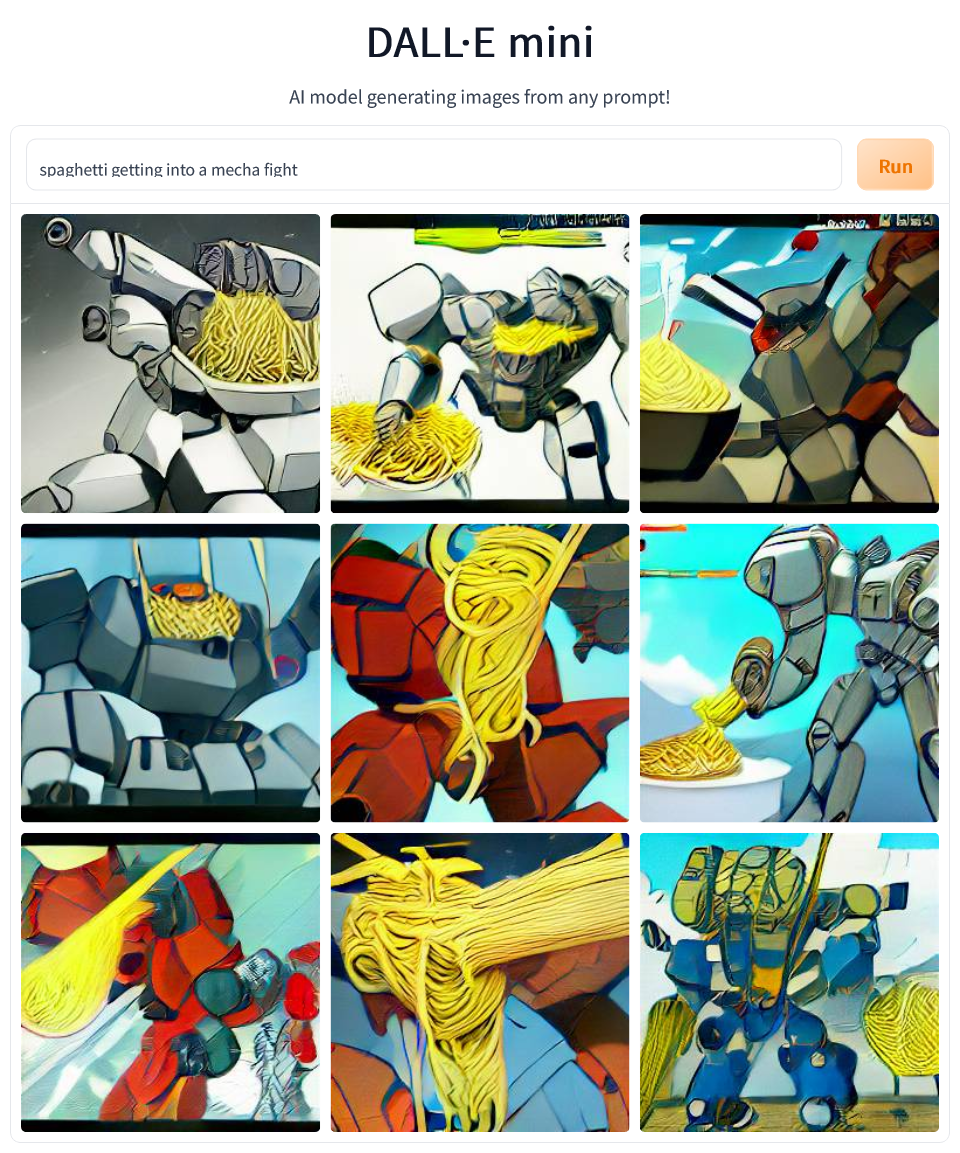 Man, I was just hoping for a 50-foot tall robotic box of spaghetti, or the box of spaghetti hunched over in a cockpit. I’m not even sure this one worked since I think DALL-E got confused by “getting into” since that can mean to enter or to start. Hmm, let’s go for something less ambiguous. “Quantum anime visualization.” 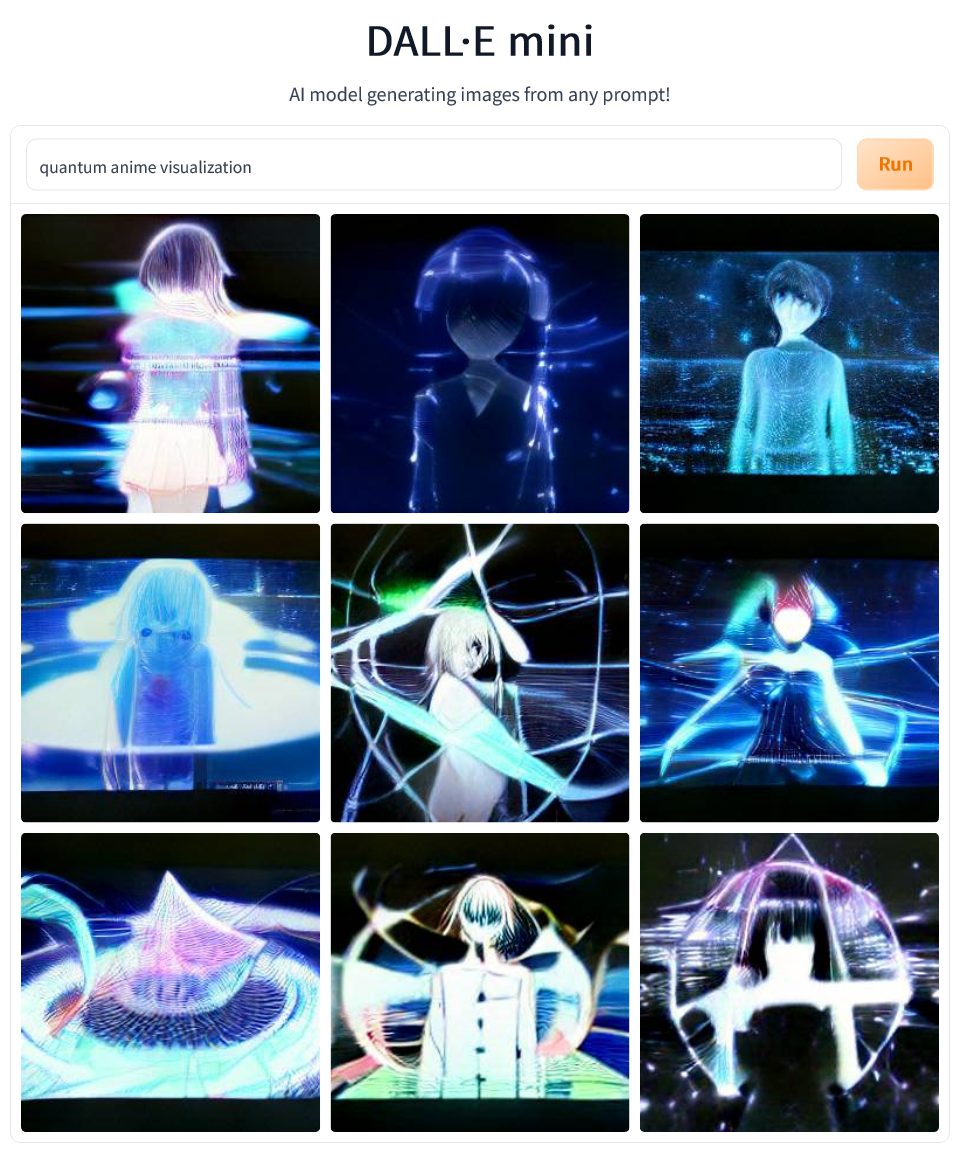 It’s not super funny, but I’m absolutely down for that aesthetic. Hmm… “Anime figure getting arrested.” 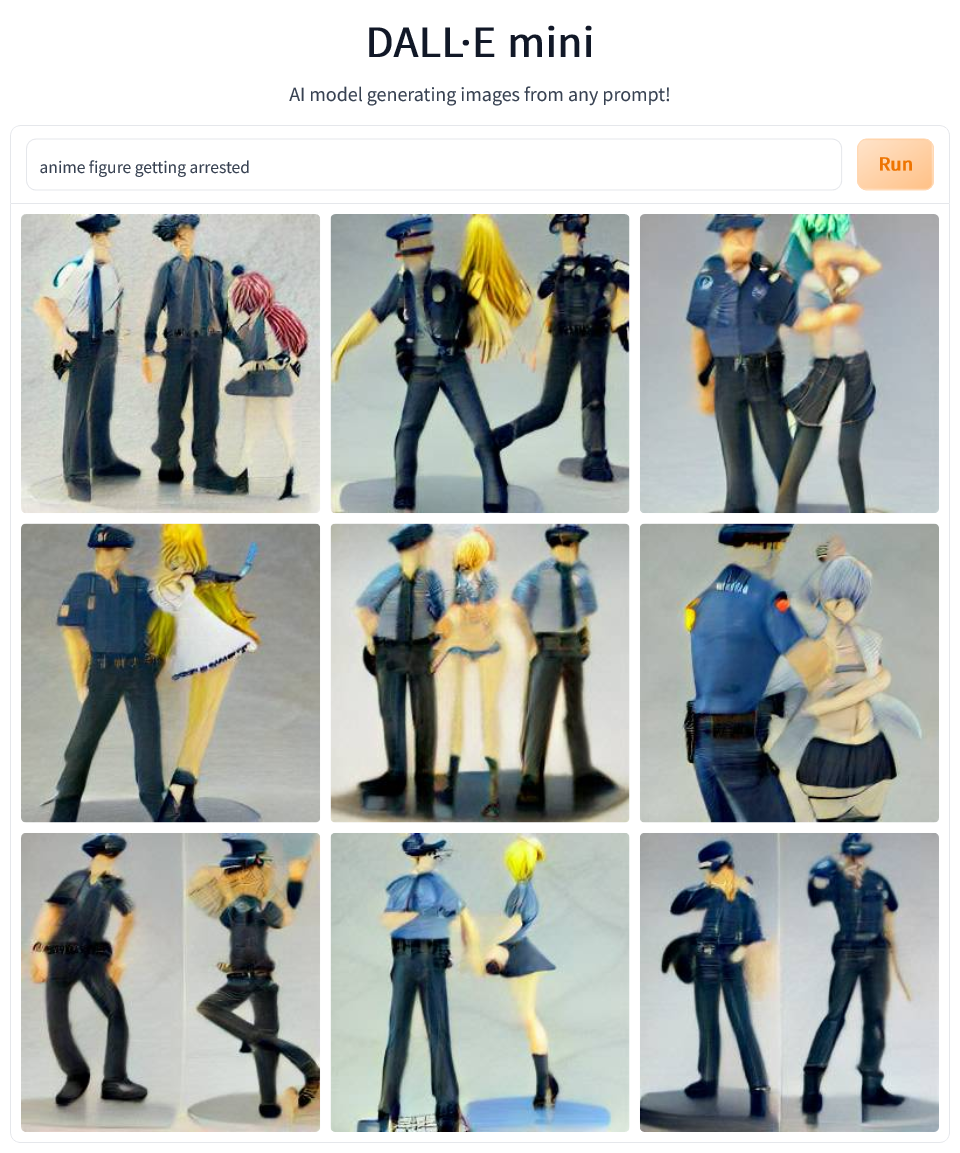 I mean, I was hoping the setting was going to be realistic other than the figure, but I can’t say I’m disappointed by the new bootleg toy line I apparently found. Feel free to try and figure out what’s happening in the lower left image though. The cop on the right is either dancing or phasing into another dimension, I think. Anyway, “Kawaii Nazca lines” 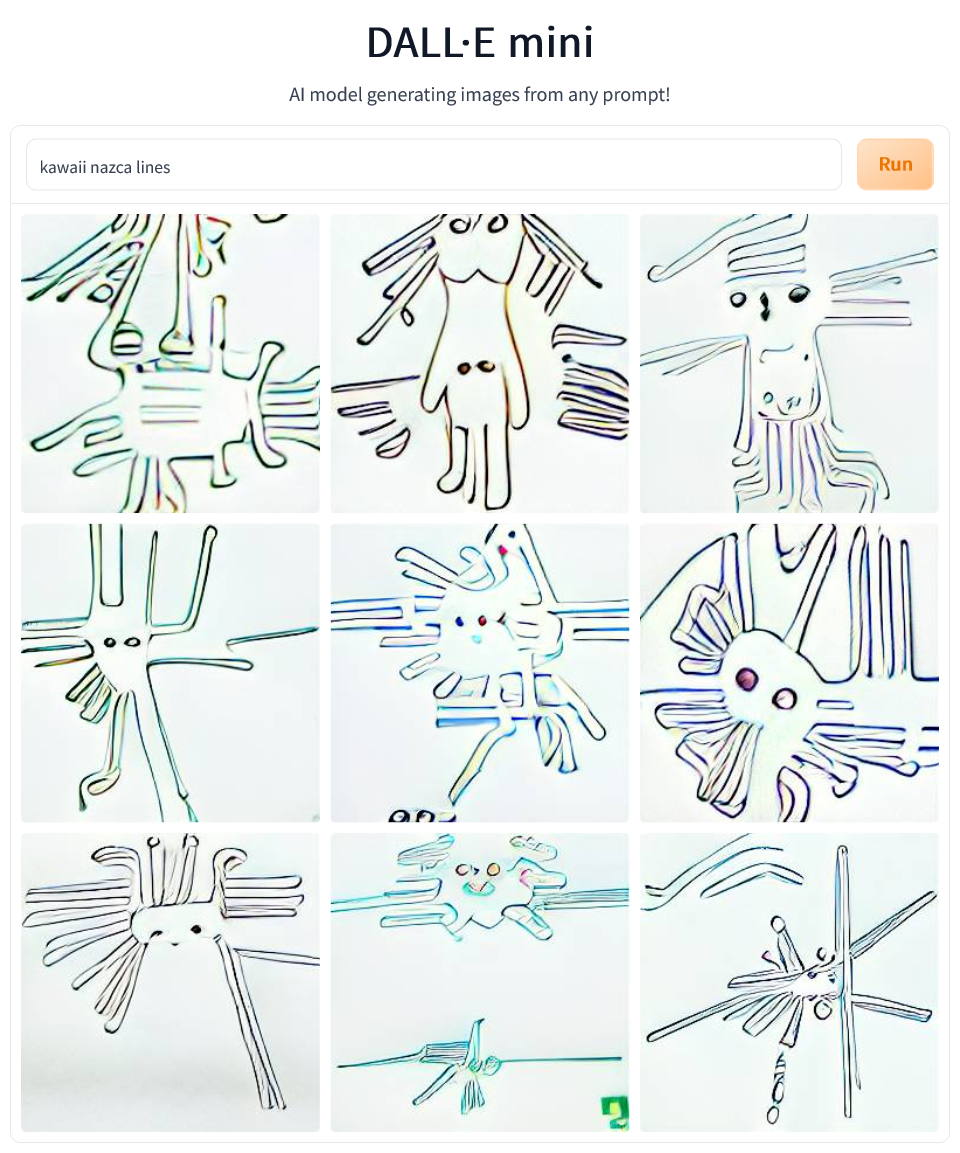 Fair enough, that one’s on me. I forgot for a moment that “Kawaii” doesn’t just refer to anime. Still, those are too cute to not show off, right? Anyway, let’s try for something a bit more serious, “Anime confession scene under the cherry blossom tree painting”. 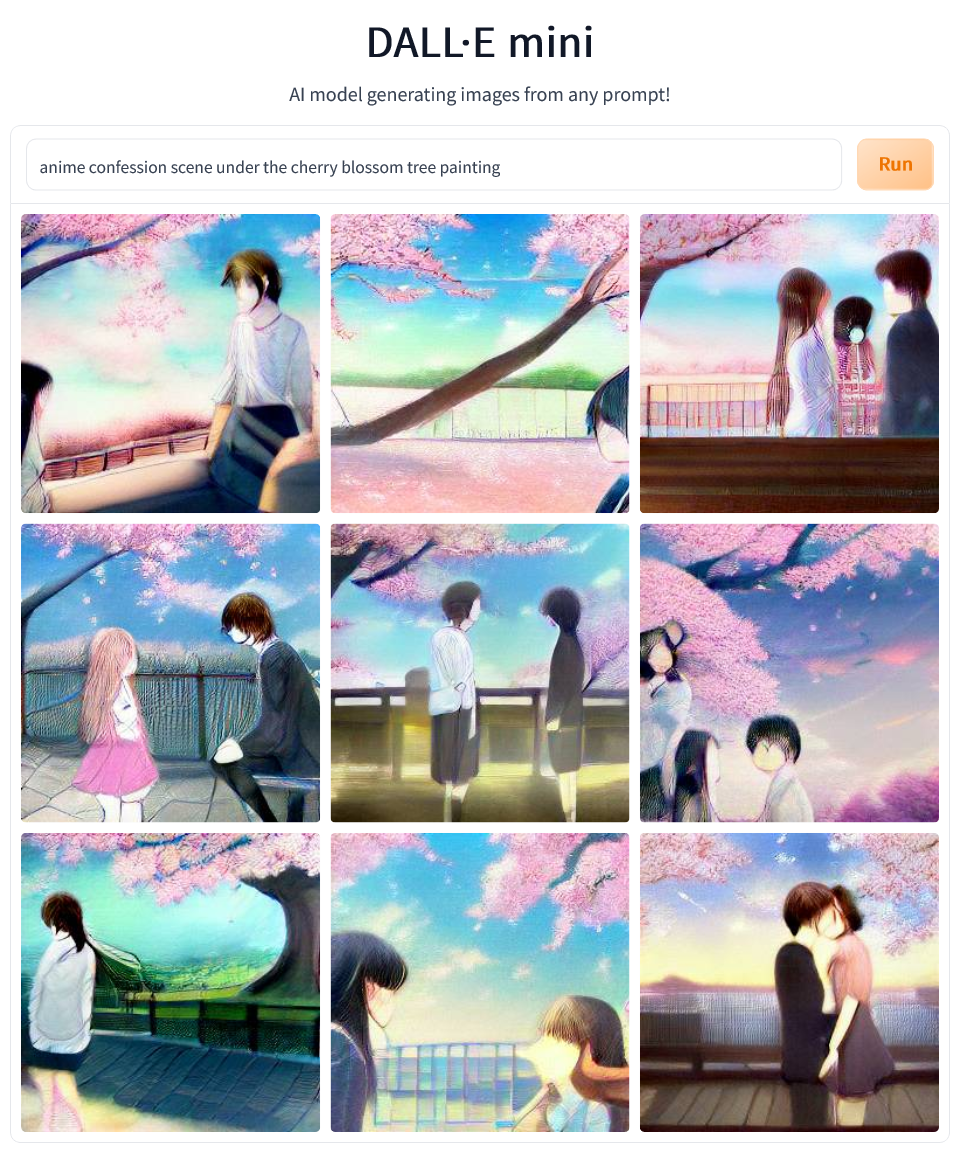 Not funny, which makes sense, but definitely pretty. Well, assuming you can ignore the faceless monsters that DALL-E really wants to convince you are people. Mainly I wanted to try and give the romance genre a shot with these images, since I’ve given some attention to battle stories and mecha already. Moving on, let’s go for two more. First, the cursed one, “Aliens come to earth to buy body pillows.” 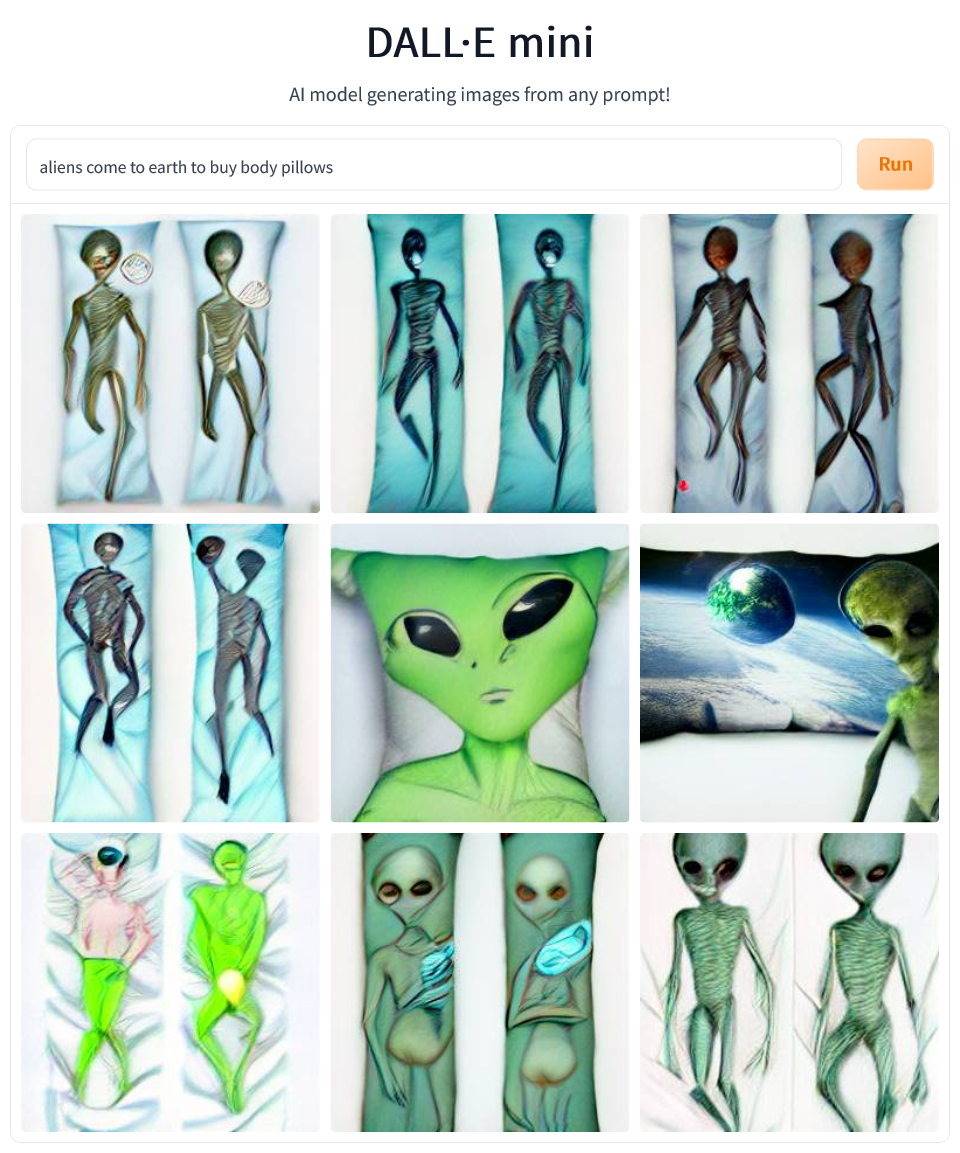 Oh. Oh, no. I wanted them to be HOLDING the pillows or something, maybe get a cameo from some show that has a lot of dakimakura merchandise or something. That’s… well it’s definitely cursed, I have to give it that. Please don’t make me think about that ever again. Let’s go to the last one, “Lawyer trying to convince a jury of anime cardboard cutouts.” 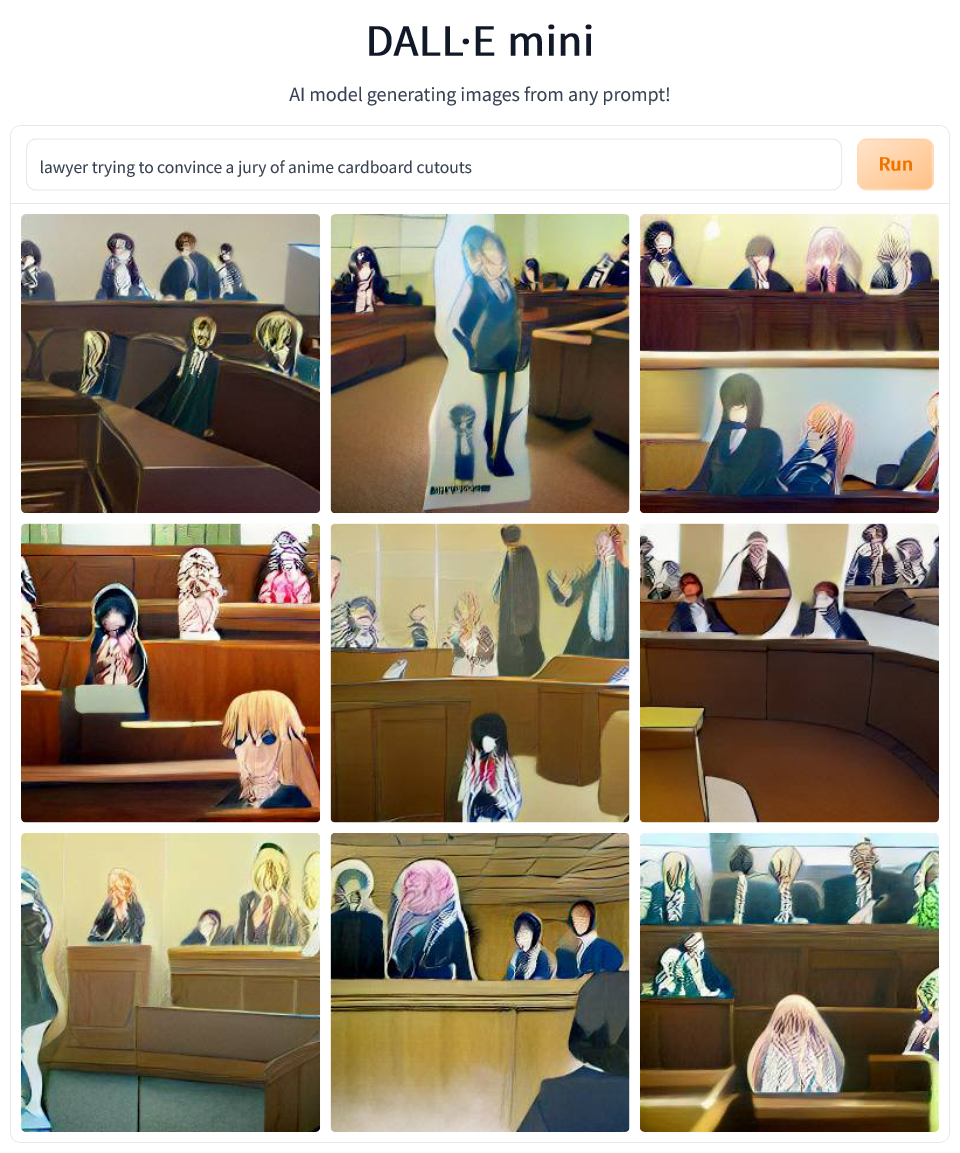 Okay, cards on the table: I spent WAY too long trying to figure out how to make this one work. DALL-E seriously doesn’t like combining art styles, but I wanted a cutout on the stand and wasn’t going to take no for an answer.

Altogether, I’d say we’ve collectively learned nothing today, but I for one had a good time figuring out some of the intricacies of DALL-E Mini.

For anyone curious, using explicit names seems to help out — I tried so many searches using “Cryptid,” but one “Bigfoot” search immediately got better results — and mentioning a specific place, action, or camera type can drastically change the images (hence why the hotel peephole is still probably the best all around set of images here).

Oh, and for anyone curious about where the thumbnail image came from, it’s one of the results from the search “anime character made in crop circles.” Most of the results weren’t great, but that one was striking enough that I wanted to keep it.

What are your favorite DALL-E images? Did you manage to make any anime ones that were more cursed or funny than these? Let me know in the comments below!