Over 1,000 digital monsters were on display 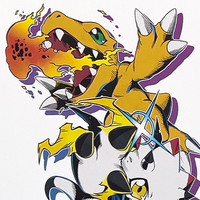 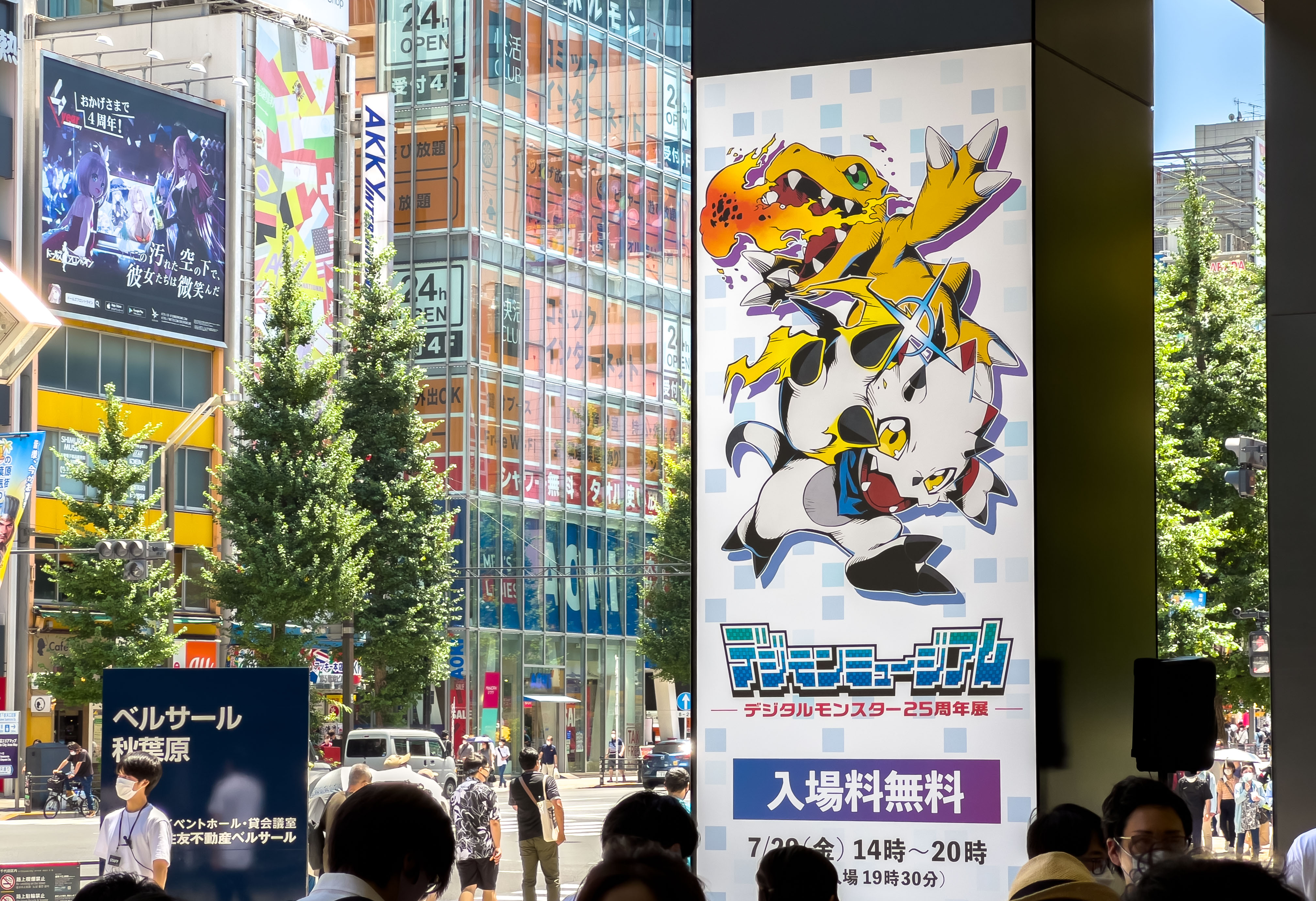 Note: All photos were taken by Daryl Harding

For many people around the world, Digimon was one of the anime series that woke us up in the morning whether to start the weekend or for a sense of relief before dragging ourselves to school. Even after all this time, I still hum the “DI-DI-DI-Digmon, Digital Monsters” tune under my breath during my daily life.

During one of the hottest summers in Tokyo’s history, the Digimon franchise celebrated its 25th anniversary with a bunch of events around Tokyo, the real-life metropolis where the series set so many of its animated adventures. 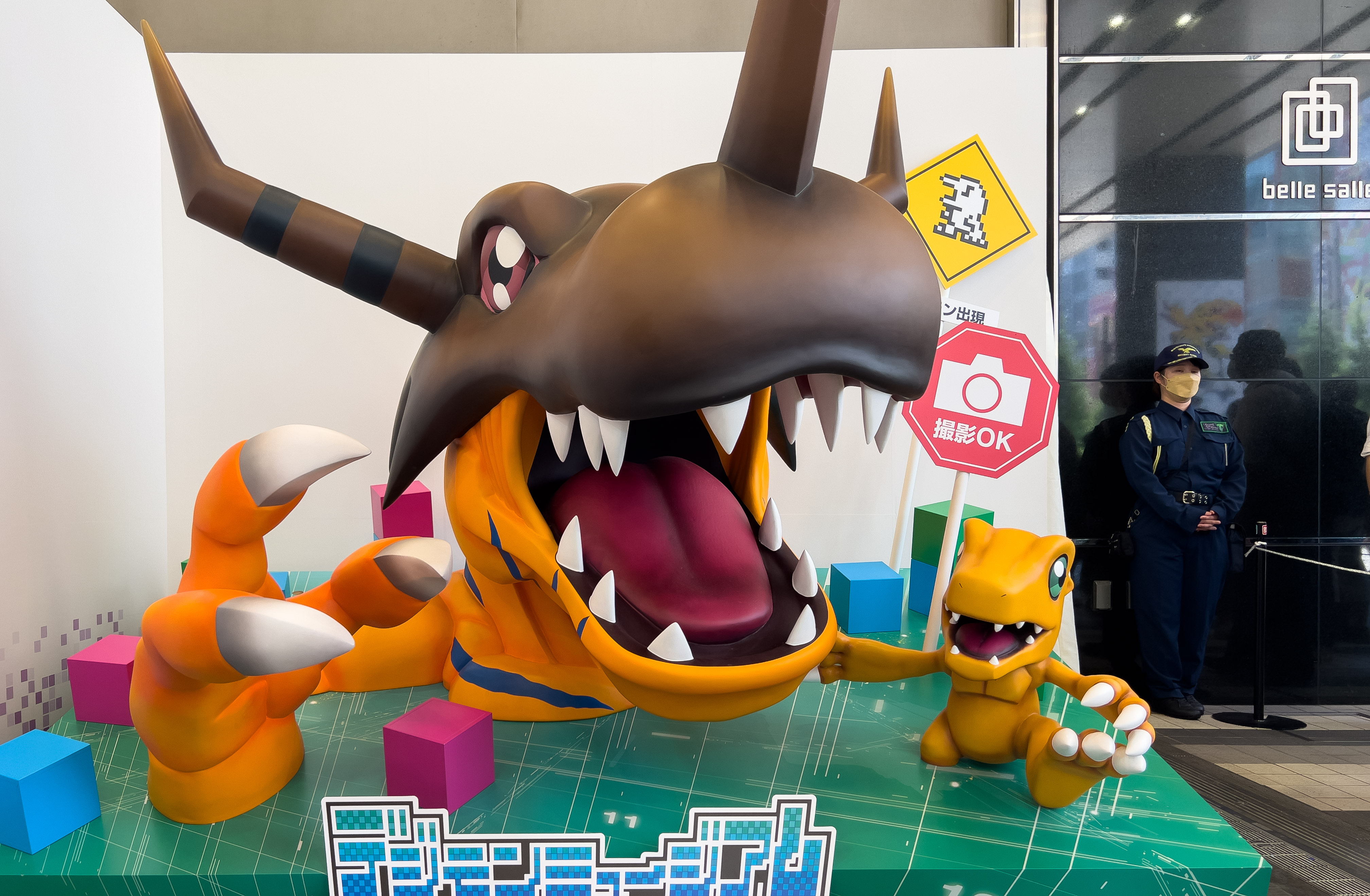 A life-sized statue of Greymon

One such event was the 25th-anniversary museum in downtown Akihabara, showcasing the entire history of the Digimon franchise from the little digital pets to its future, surrounded by brand new art of every major Digimon to grace the multimedia juggernaut. 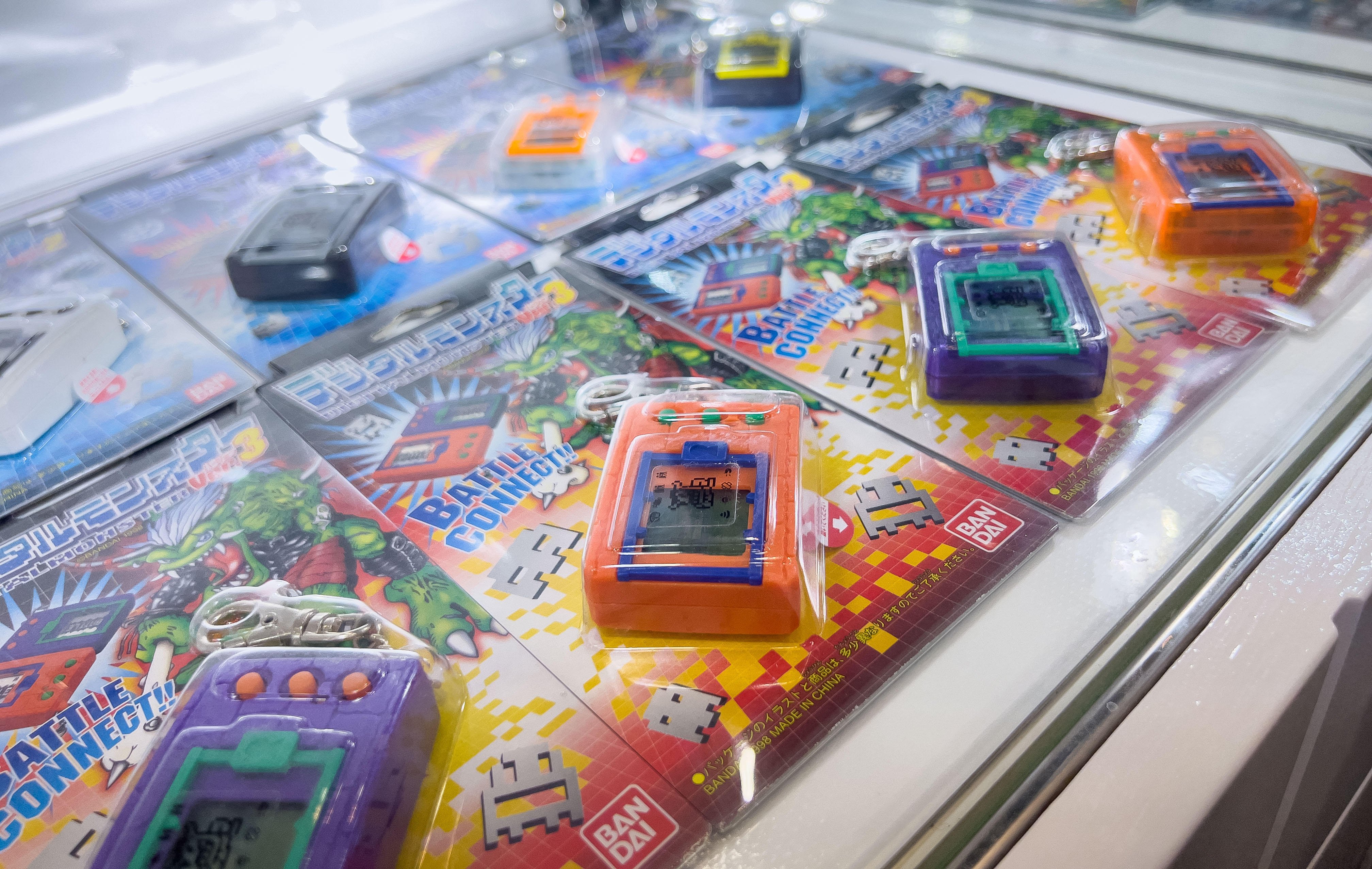 Many people don’t remember the fact that the Digital Monster virtual pets came first, not the anime series: in fact, the original Digimon Adventure TV anime started in1999, nearly two full years after the first Digital pet. Additionally, the first Digimon World game, a staple in any fan’s PS1 library in the era, was released two months before the anime aired in Japan.

The event began with a short history of the beginning of the Digimon franchise, as well as the core concepts of Digimon evolution and even a complete rosetta stone for the alphabet used in the series for both English and Japanese scripts. 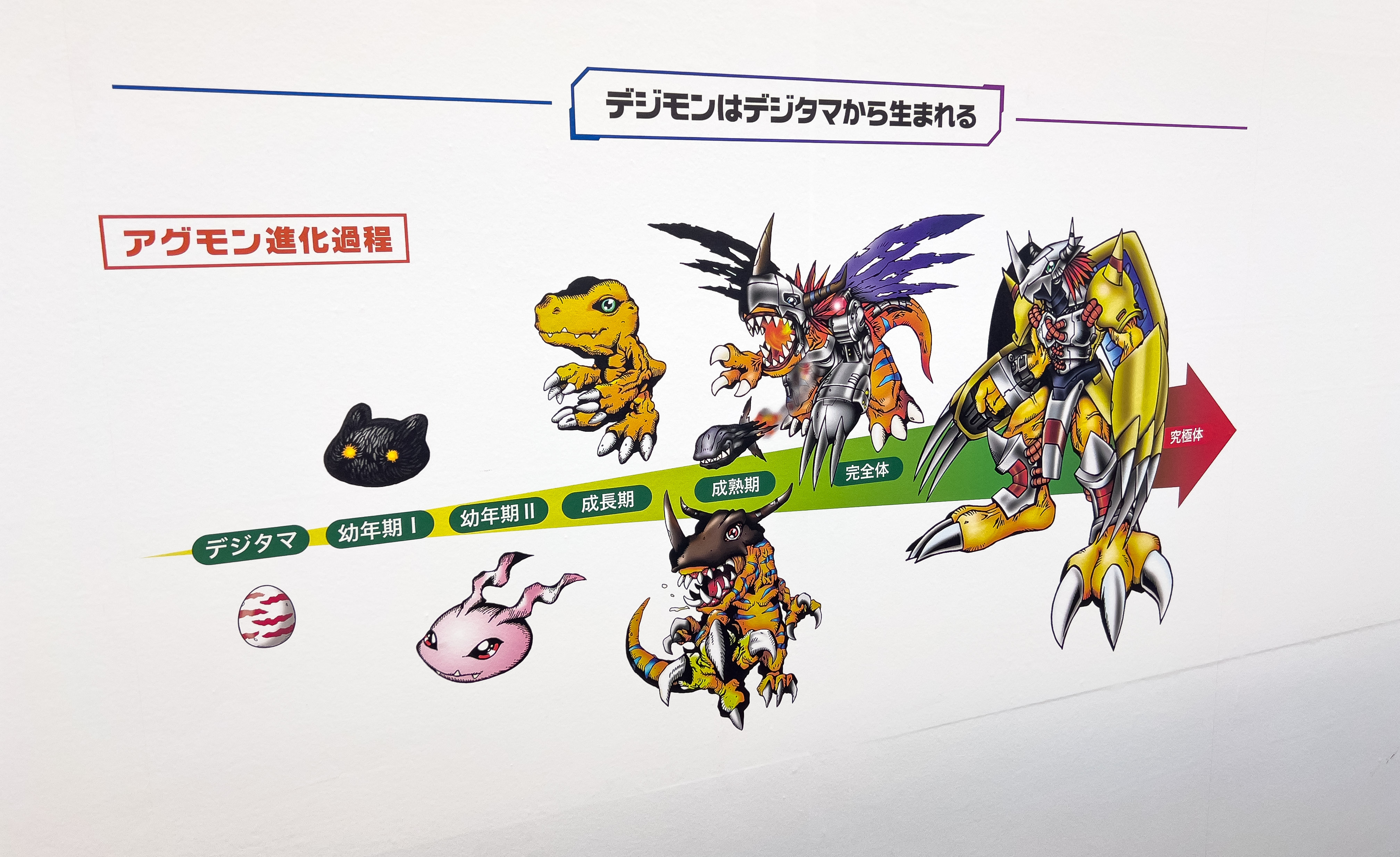 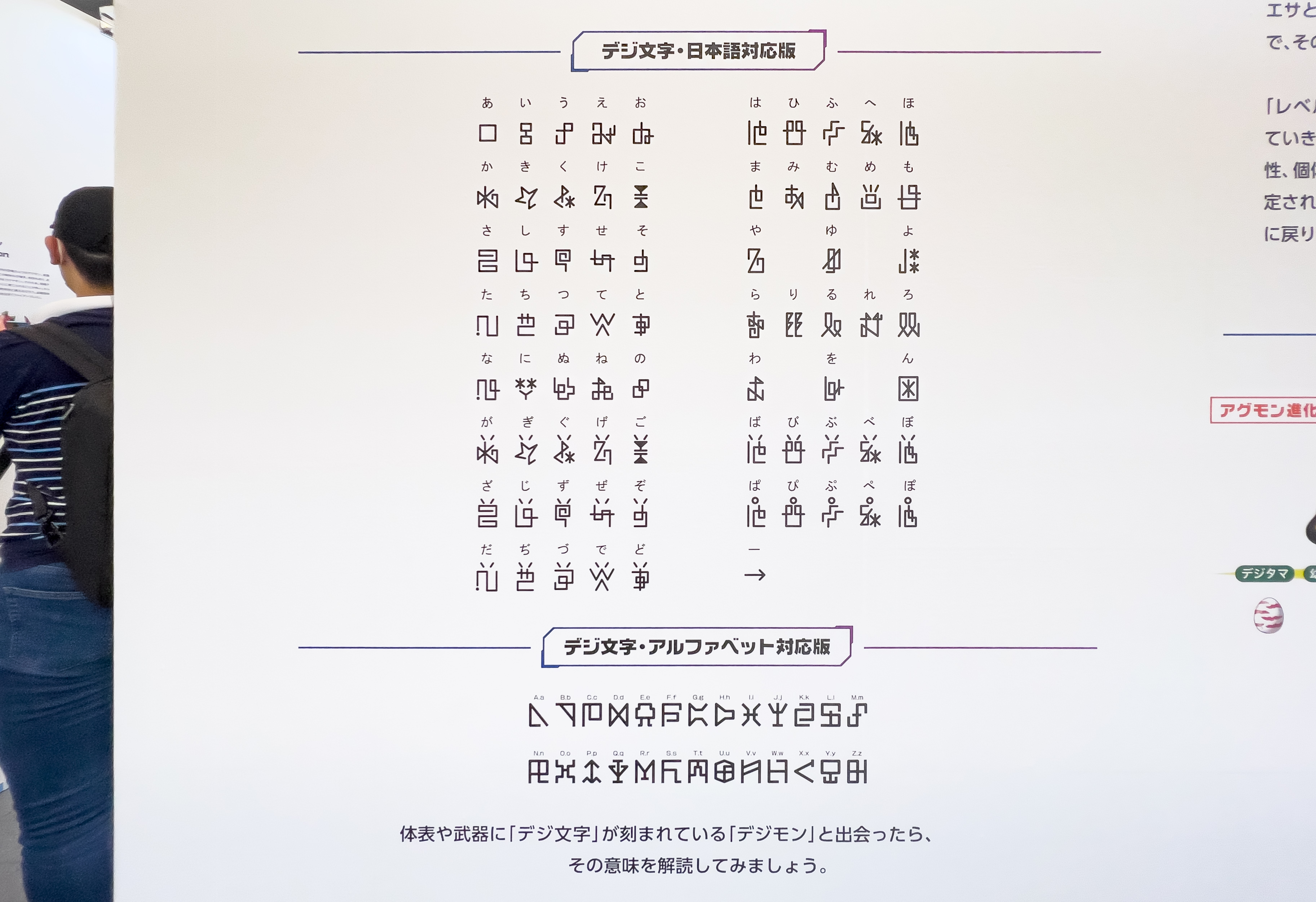 As I walked through the makeshift halls of 1,000 Digimon, the Digimon games and virtual pets were arranged in cabinets to peer through, arranged according to their place in the gaming history. 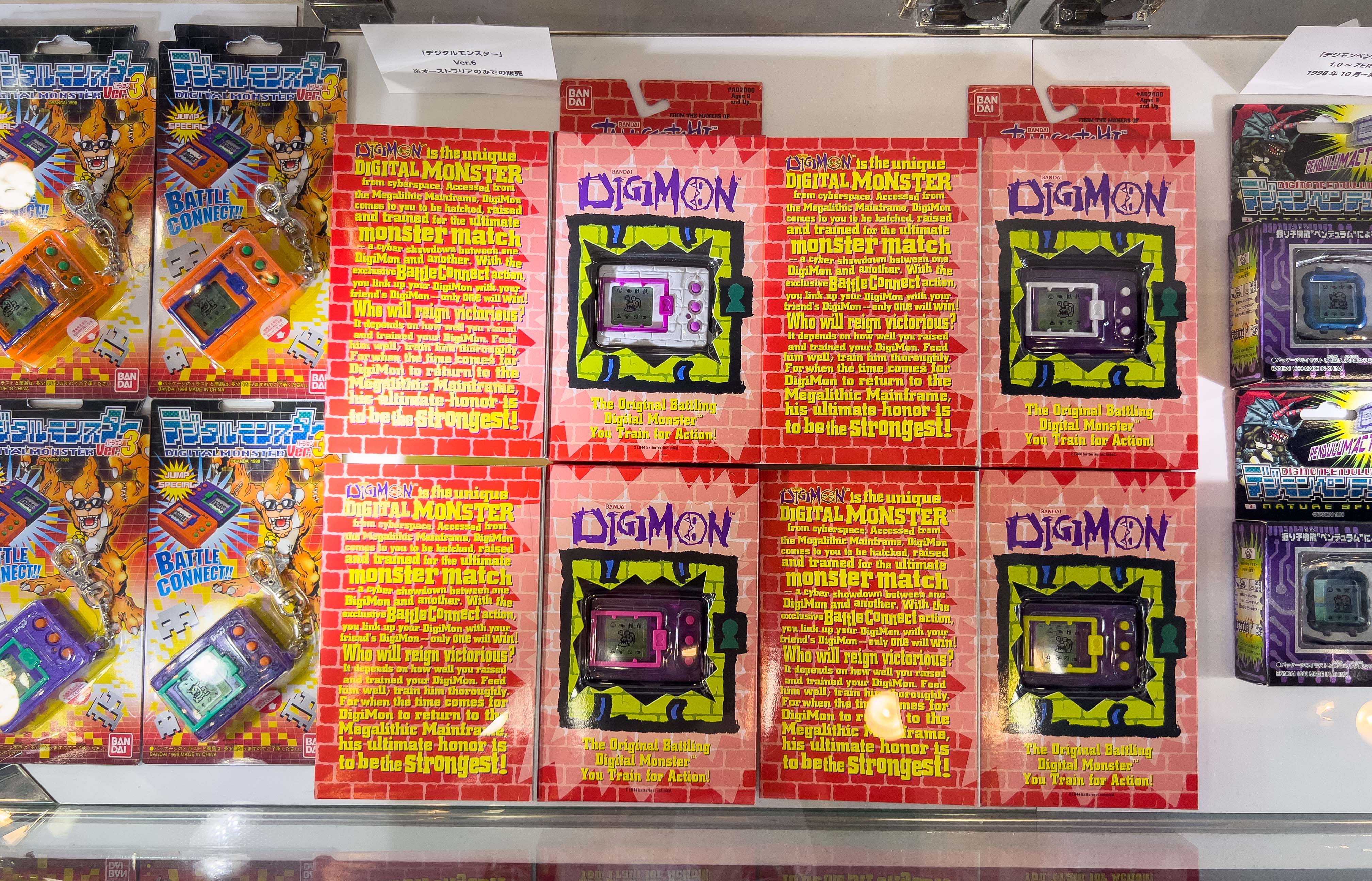 While these all were a great trip down memory lane, especially for me who grew up with a Digimon Adventure 02 Digivice and Digimon World on the PlayStation, what was most exciting was seeing the original Japanese WonderSwan games complete with a working WonderSwan Color Growlmon Version – a very rare version of the WonderSwan Color that is barely noted upon on the web. 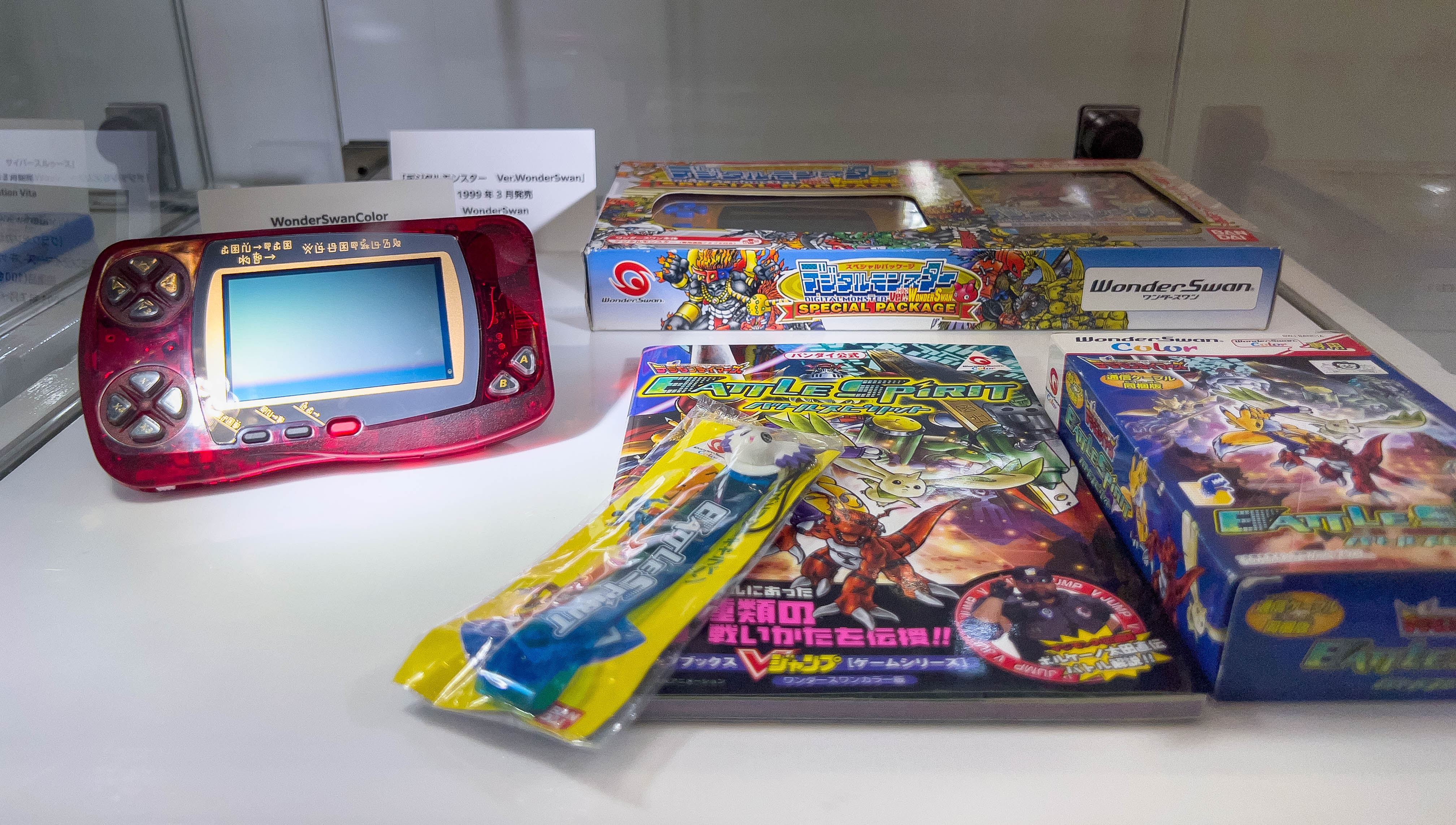 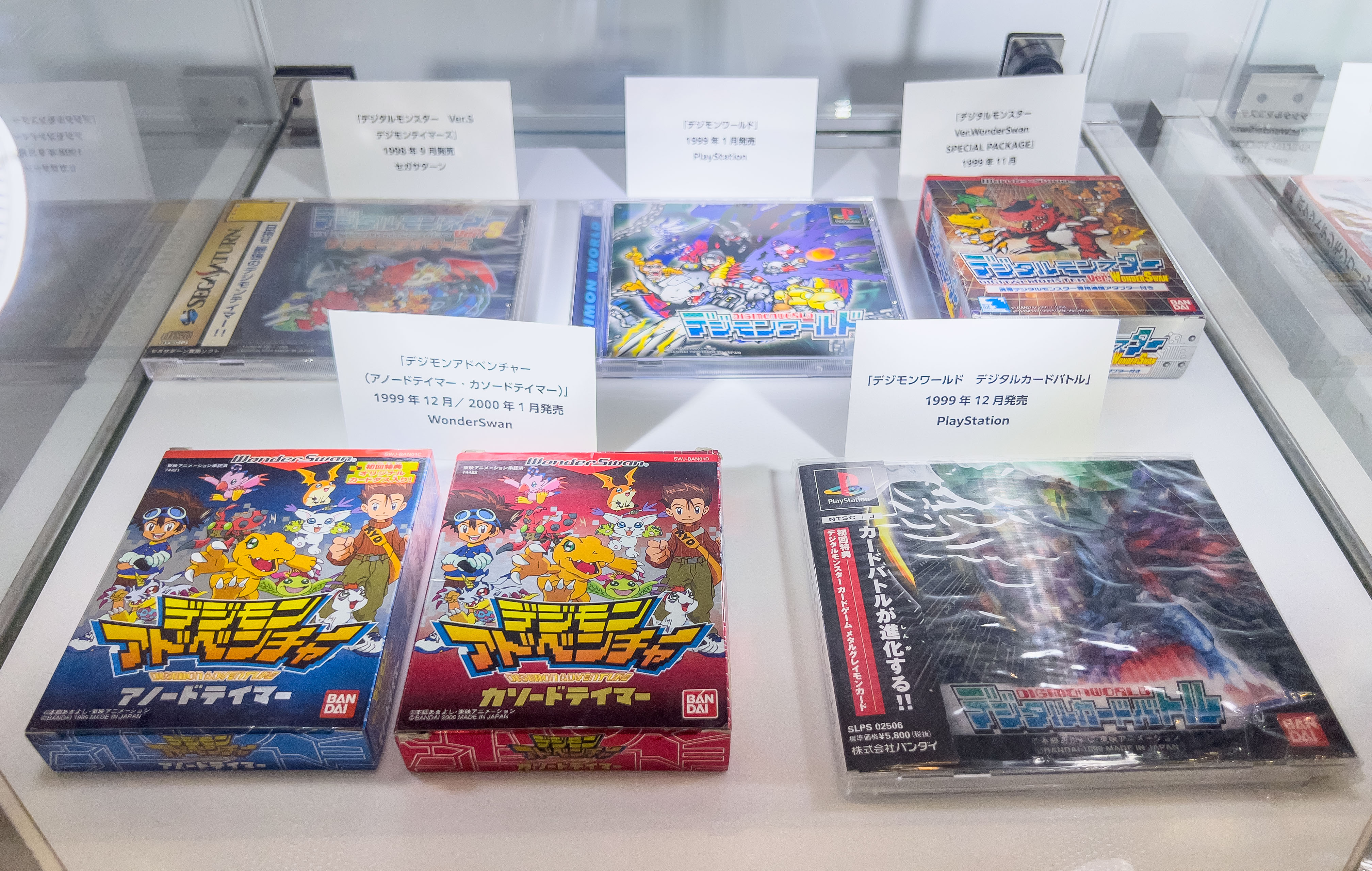 But what is Digimon without the anime? The anime area blasted music from the series and films as the creditless openings and endings from each series were shown on a screen above details on each of the series. Each theme looked great, seemingly like proper high-definition upscales of the original footage, other than Digimon Savers (known in the west as Digimon Data Squad) which had some very glaring frame rate issues. 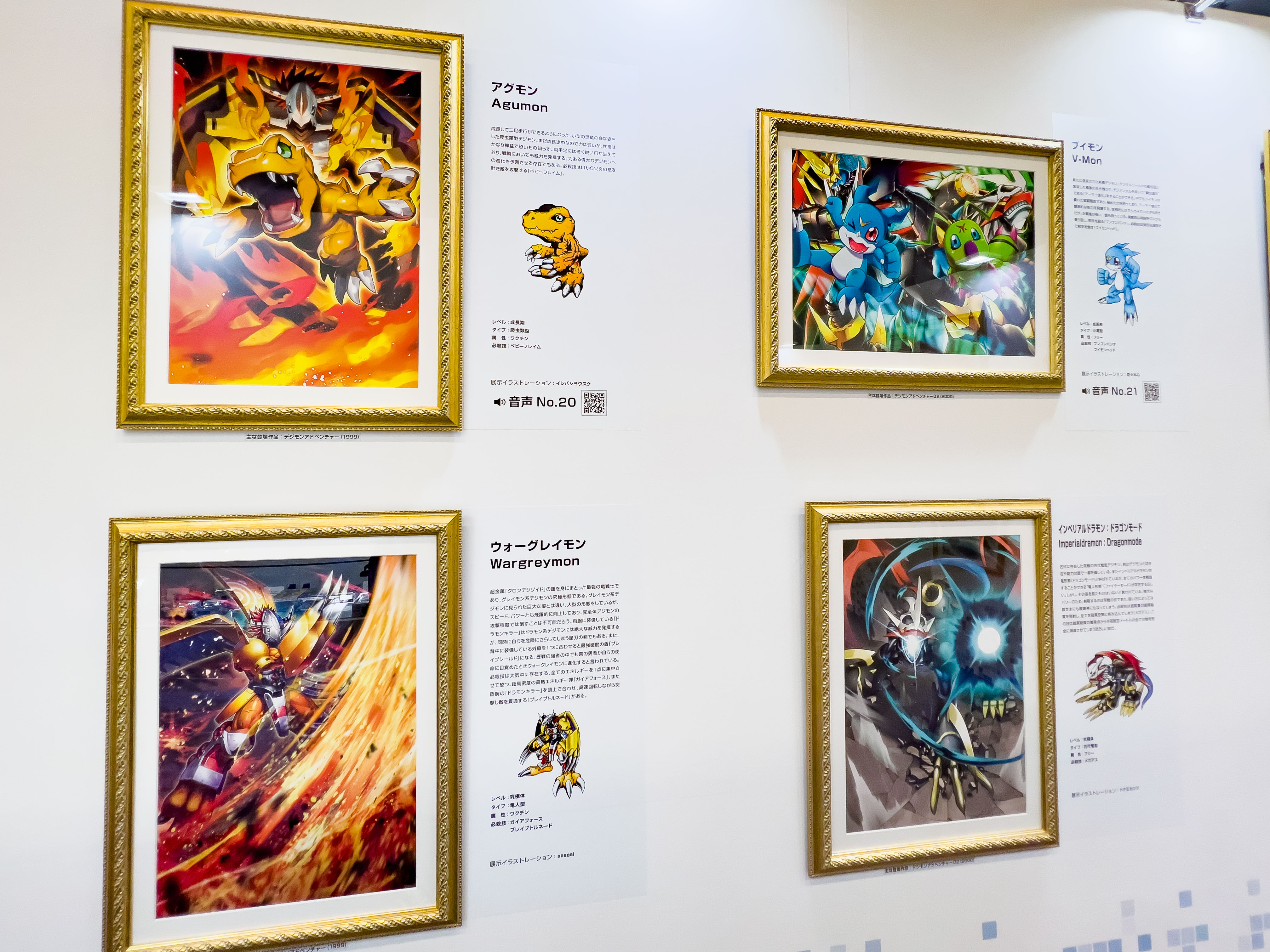 I couldn’t help but tear up at the sound of Koji Wada’s “Butter-Fly” as it played in front of me. I always get a little emotional when I hear the song, but being surrounded by a celebration of Digimon just set me off. The song defines a generation of viewers, even those who didn’t grow up with the Japanese version of the series.

Screens also showed the original Japanese advertisements for the games, including the seminal Digimon World. Though looking back, I’m surprised the Digimon virtual pets picked up after seeing these ads! They’re weirder than the usual Japanese advert! 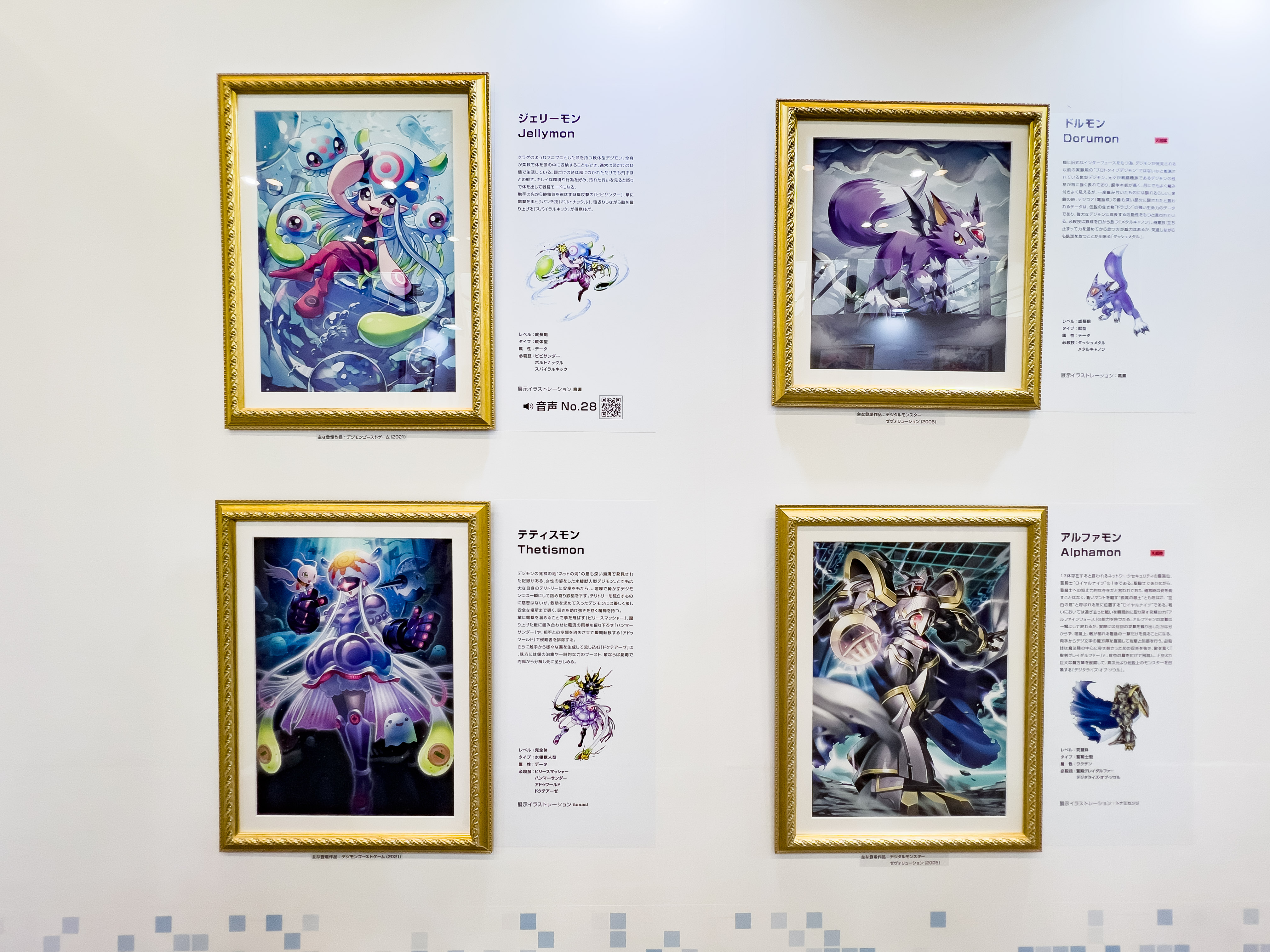 One of the sweetest things I saw while strolling through the gallery were parents bringing their children to the museum. The parents were getting excited over seeing Veemon and Agumon being represented so much, but the kids were running up and pointing out Gammamon and Jellymon from the currently airing Digimon Ghost Game TV anime. Digimon truly transcends generations.

The Current Future of Digimon

Unlike the past, which for the Digimon franchise is ever expanding and coming up to the “home loan” stage of life, the future area was much smaller but still featured future installments for the series and what is currently occurring in the world of Digimon. 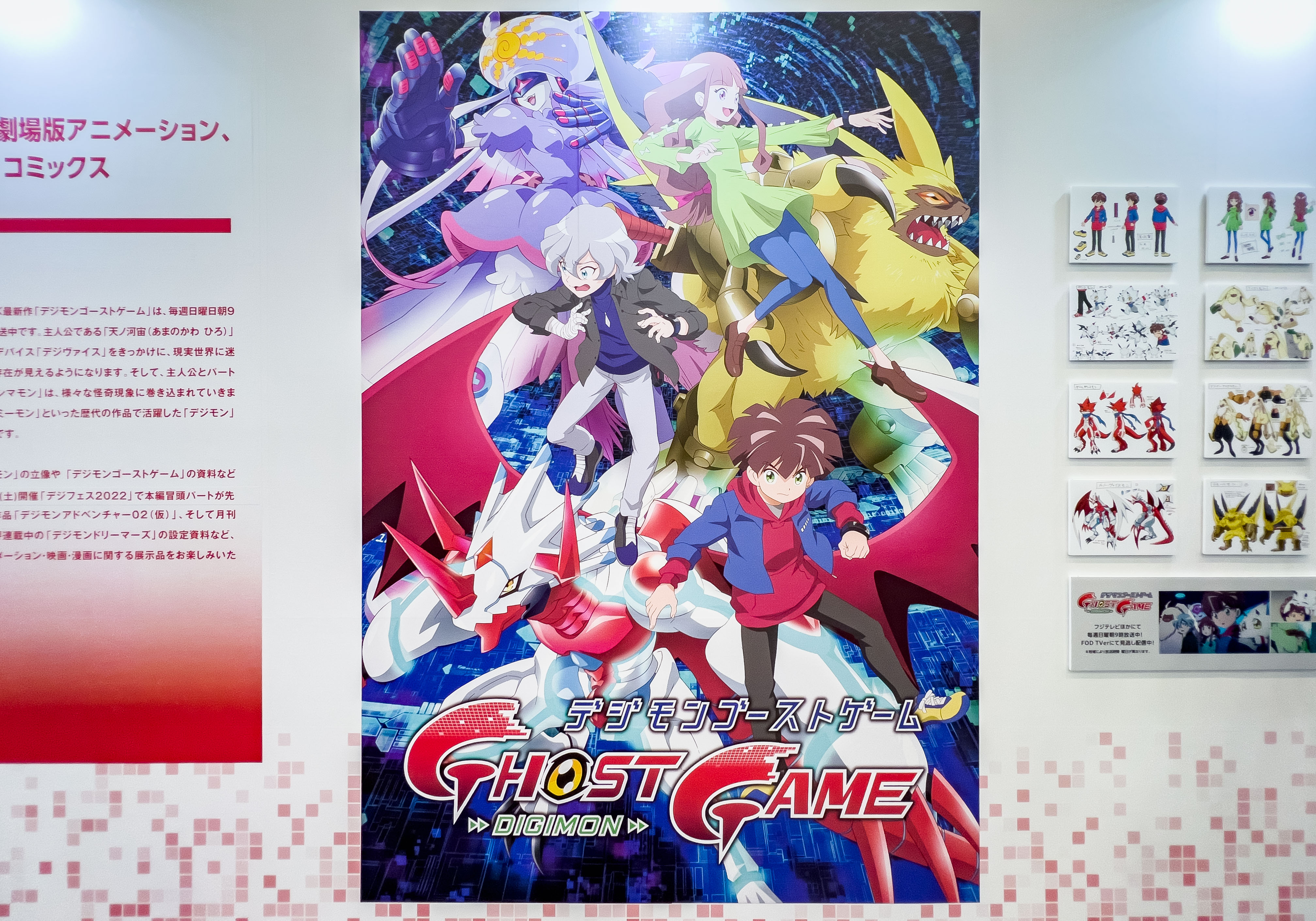 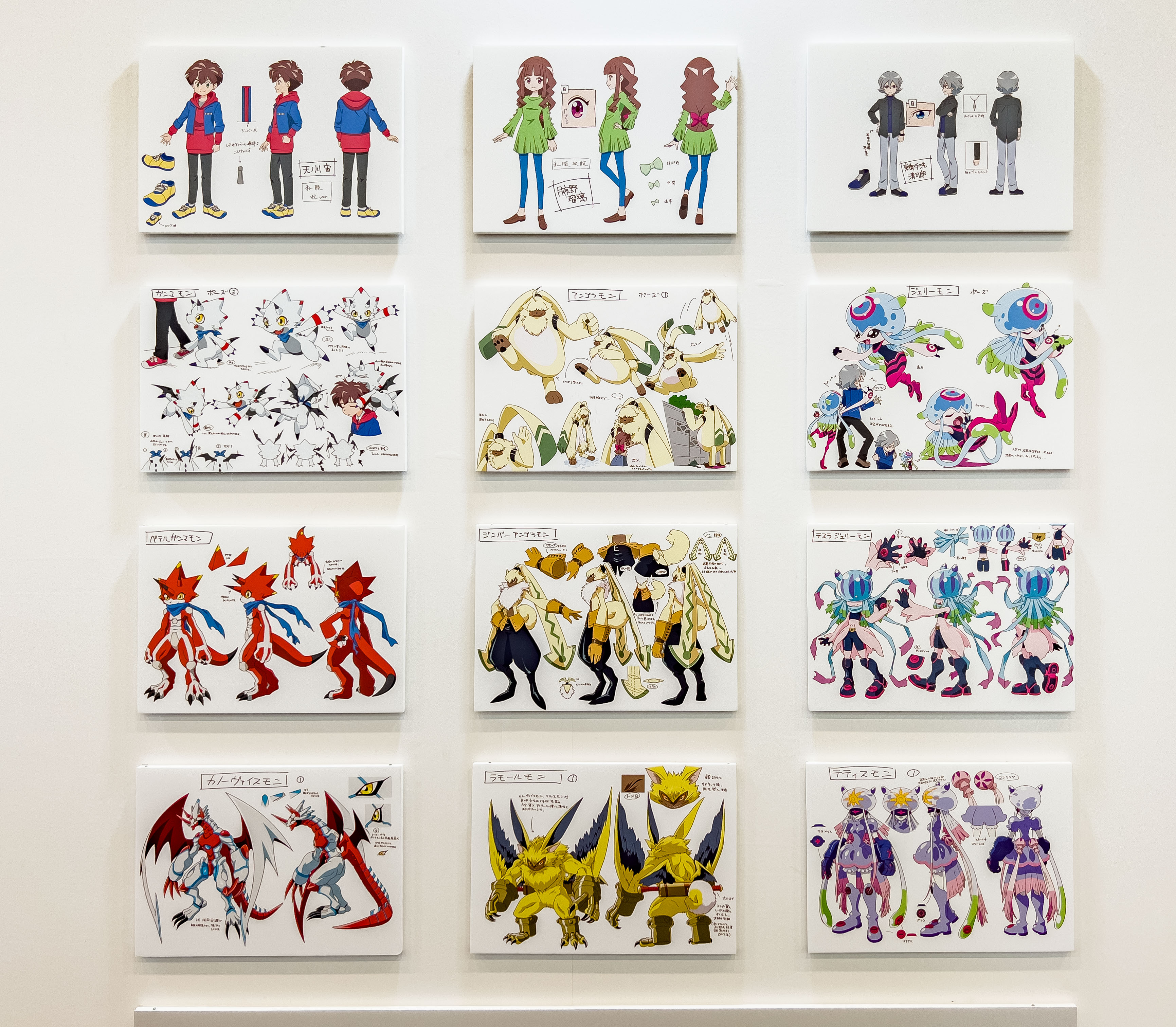 Digimon Ghost Game was a huge presence in the area, featuring key art, some pre-production character designs, key animation from the series drawn in three different animator’s styles, as well as the original dubbing scripts for the Japanese lines. It’s interesting to note that the covers of the scripts changed after the first full key visual was released, with only the teaser art shown on the first three episodes. 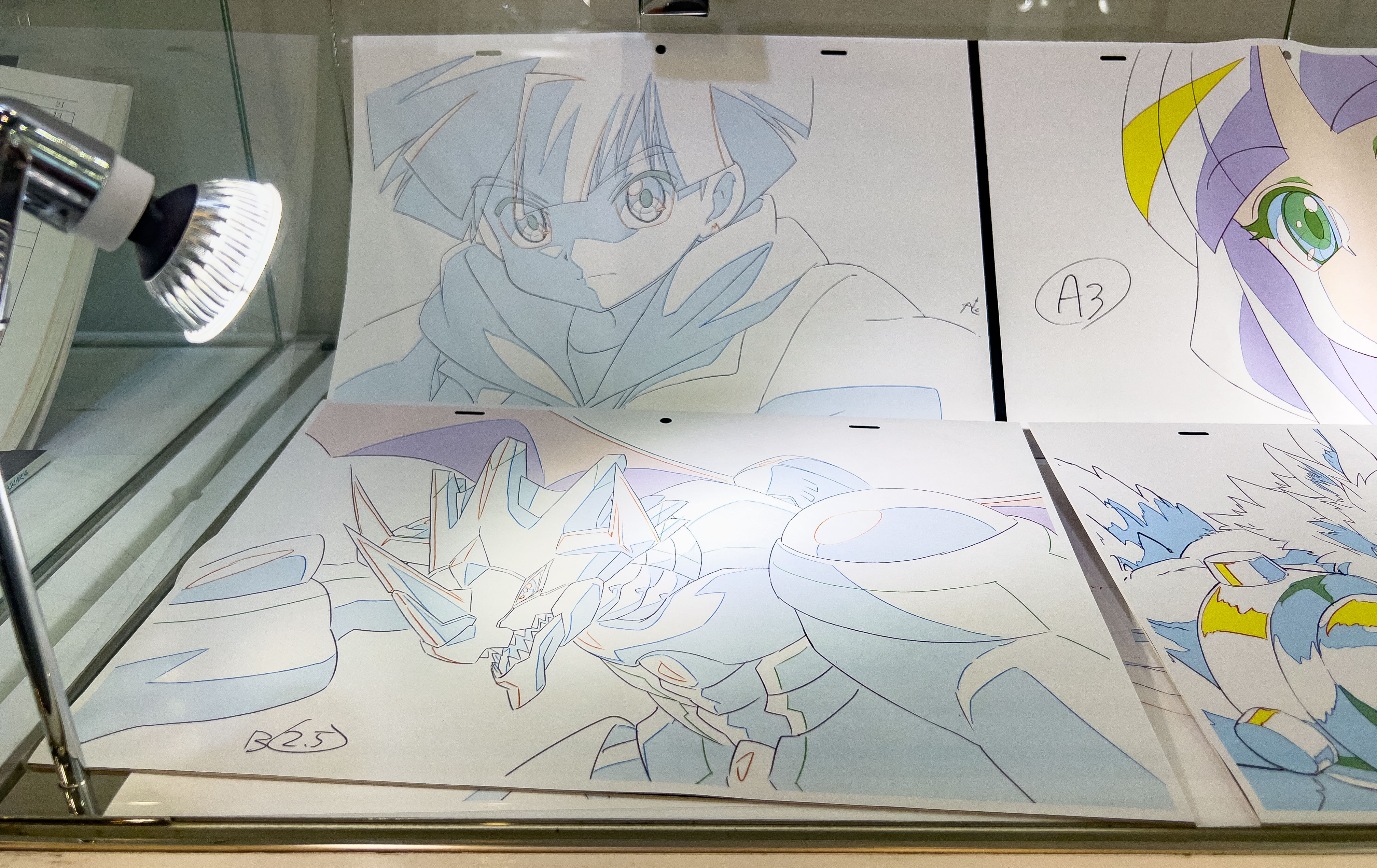 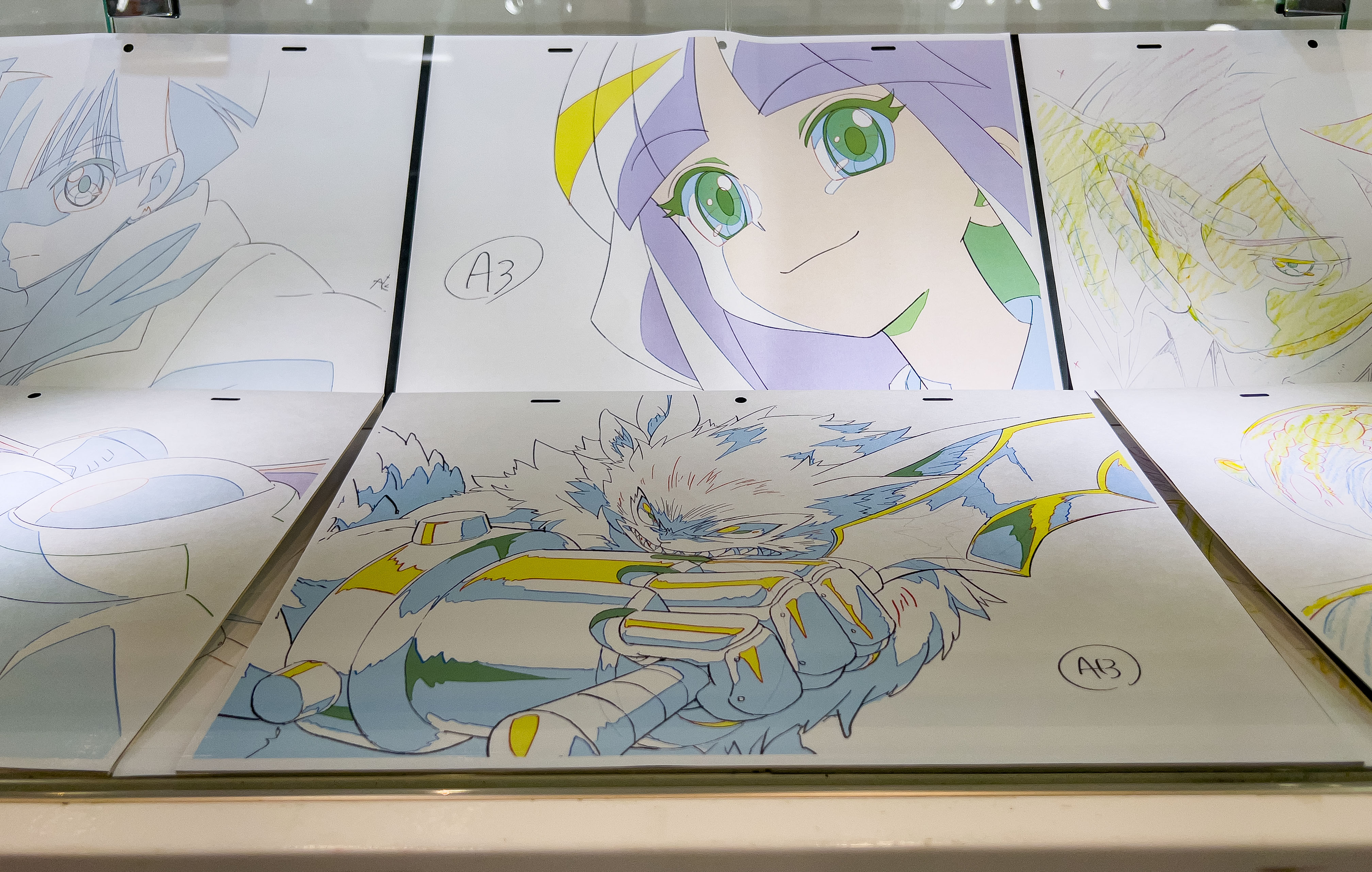 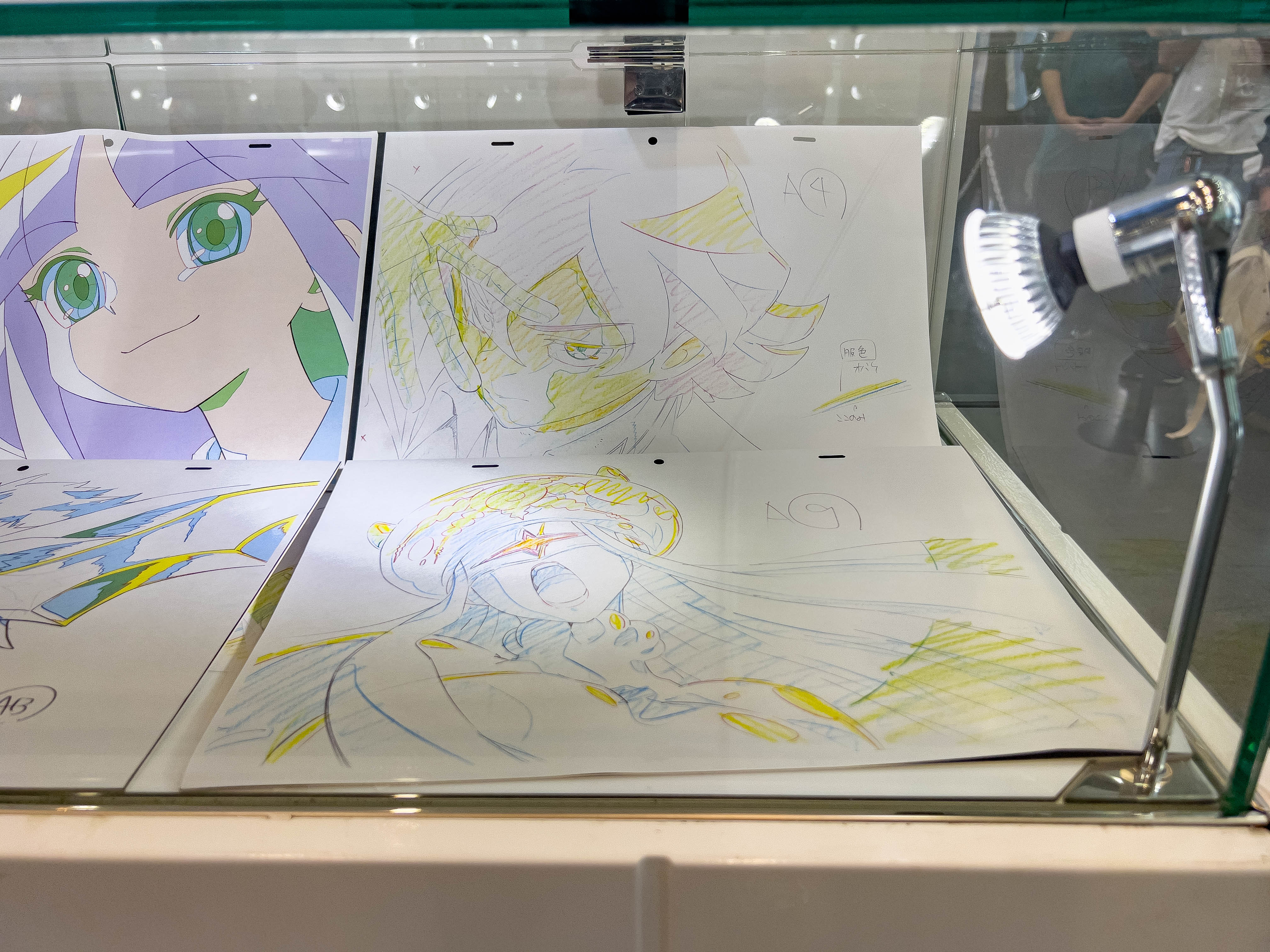 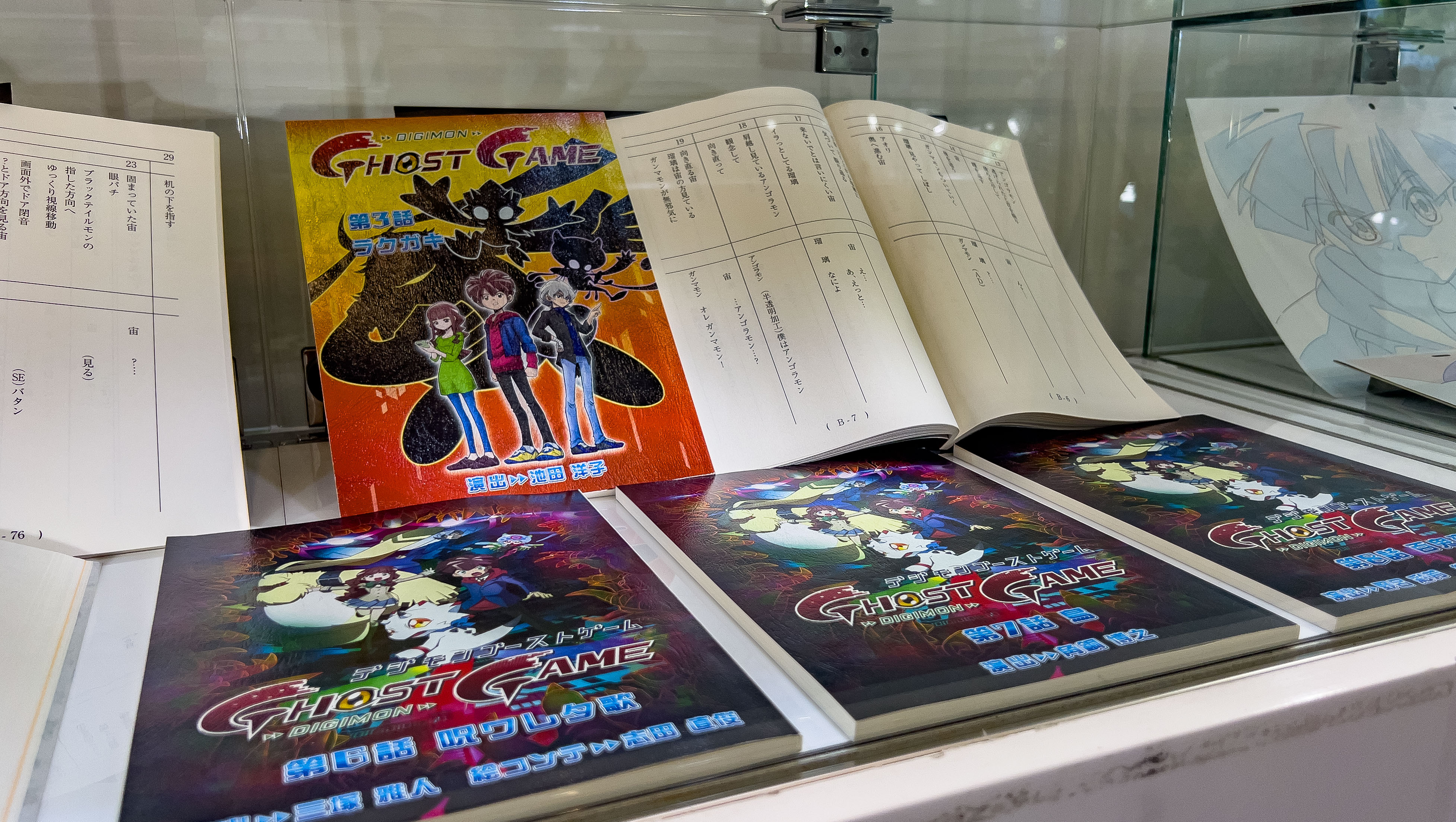 Digimon Adventure 02 THE BEGINNING, the next film in the original Adventure timeline and a direct sequel to LAST EVOLUTION KIZUNA, got a small corner in the future anime section with the key art and the character design for the “first DigiDestined” Rui Owada, who was only revealed the day before at DigiFes 2022. 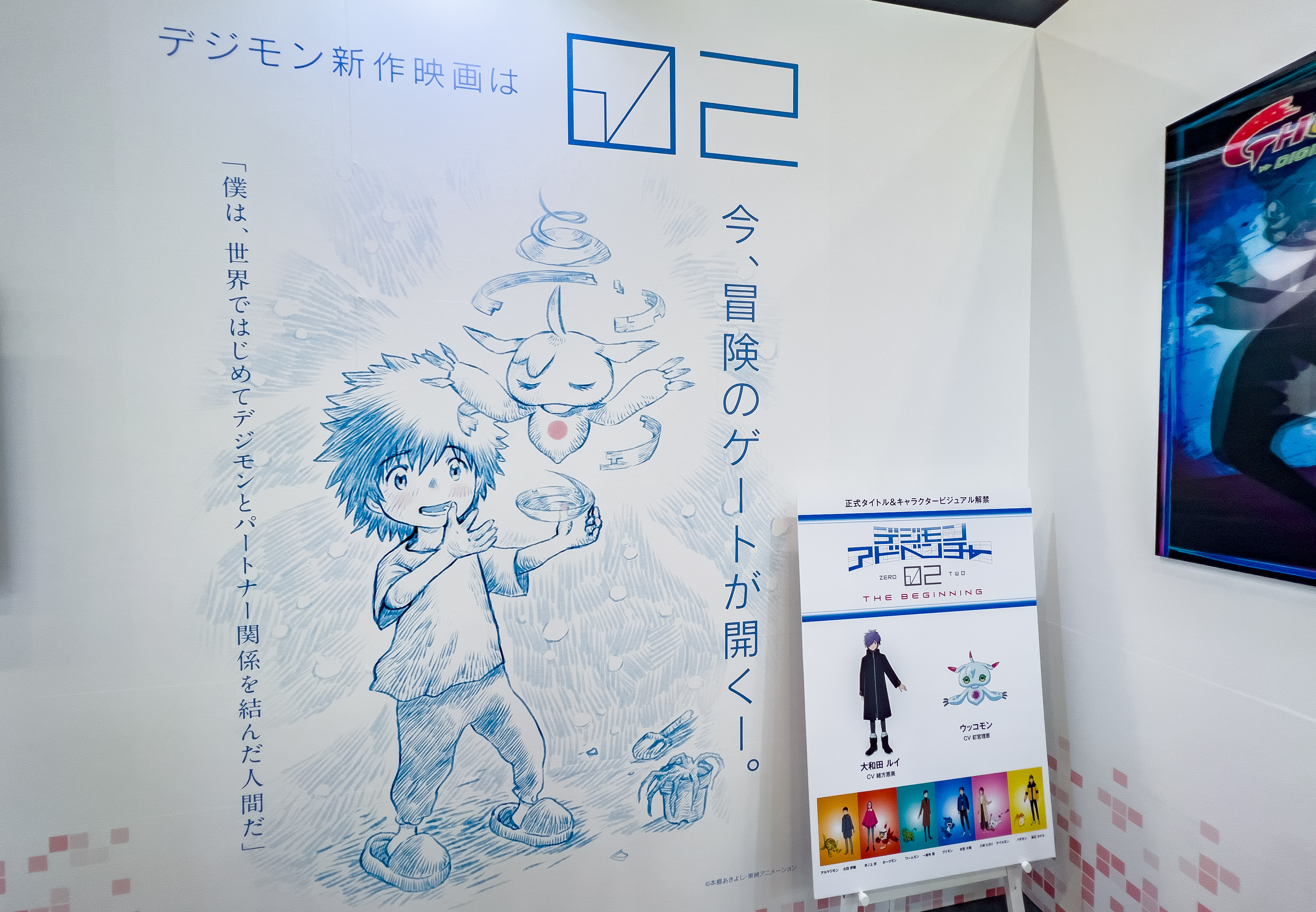 Original drafts of the currently serialized Digimon Dreamers manga by Tenya Yabuno, who also worked on the character designs for Ghost Game, were also on display. The comedy manga is currently being published in the monthly Saikyo Jump magazine. 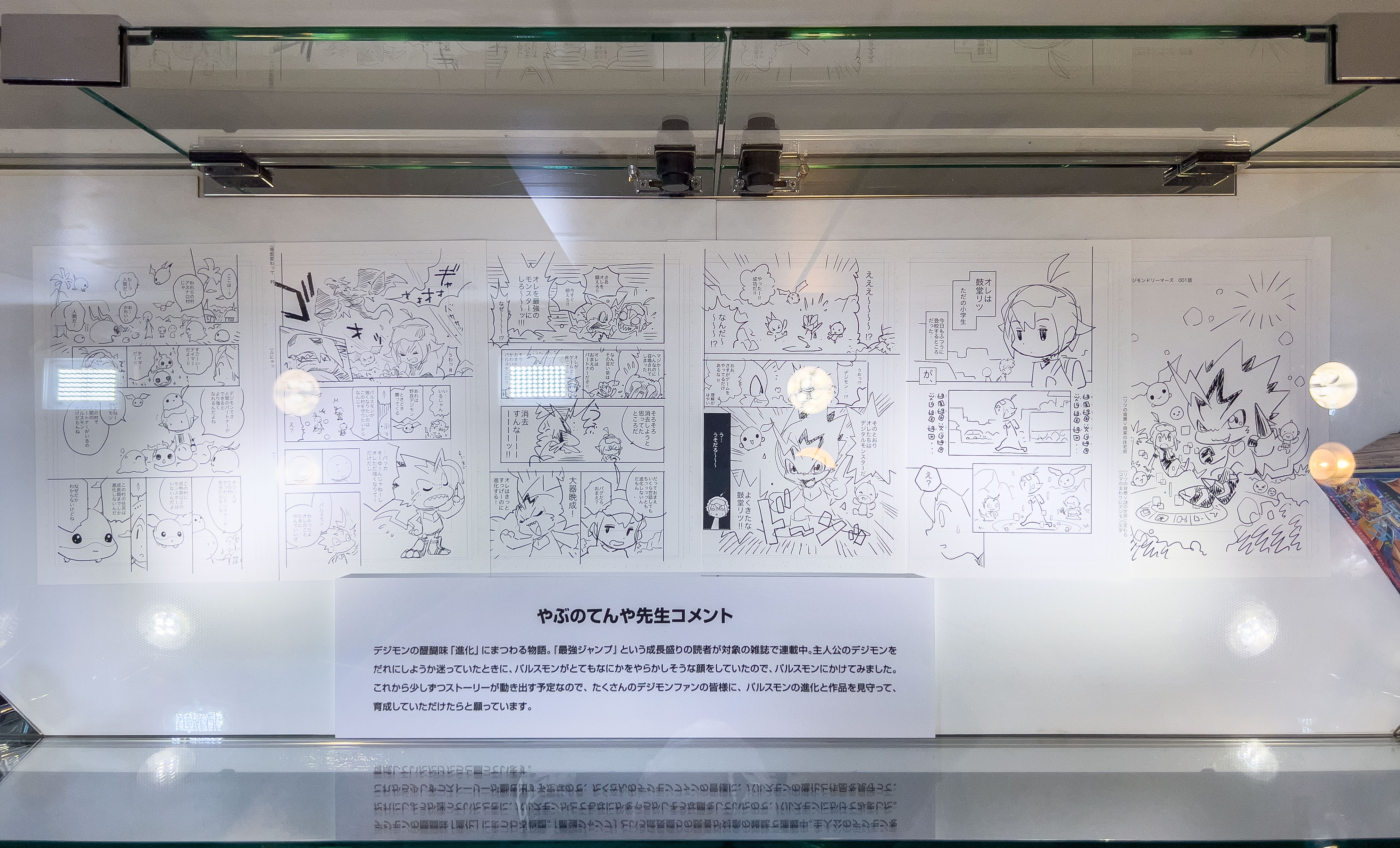 Showing on a massive screen near the exit were the Digimon Project 2021 promotional videos, really showing the scale in which the videos were made and how well produced they are for basically a product line-up. And of course how freakin’ hype they are for a Digimon fan. 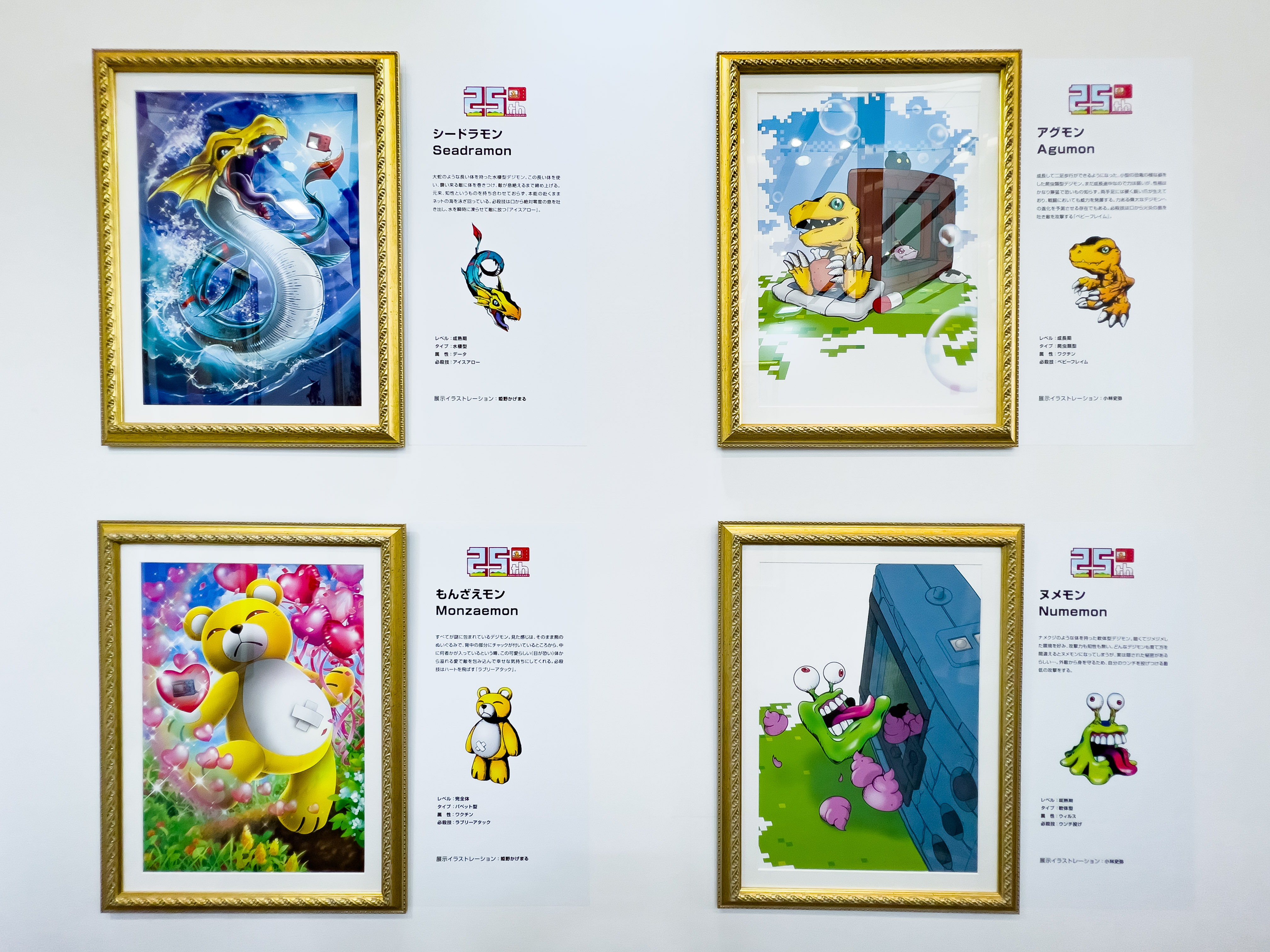 The entire museum was capped off with a gallery of illustrations of some of the most iconic Digimon coming out of their Digital Monster virtual pets into the real world. I loved these artworks the most of all due to the sheer imagination of them and the underlying concept – Digimon coming alive. Probably something all Digimon fans wished for at one point in life. 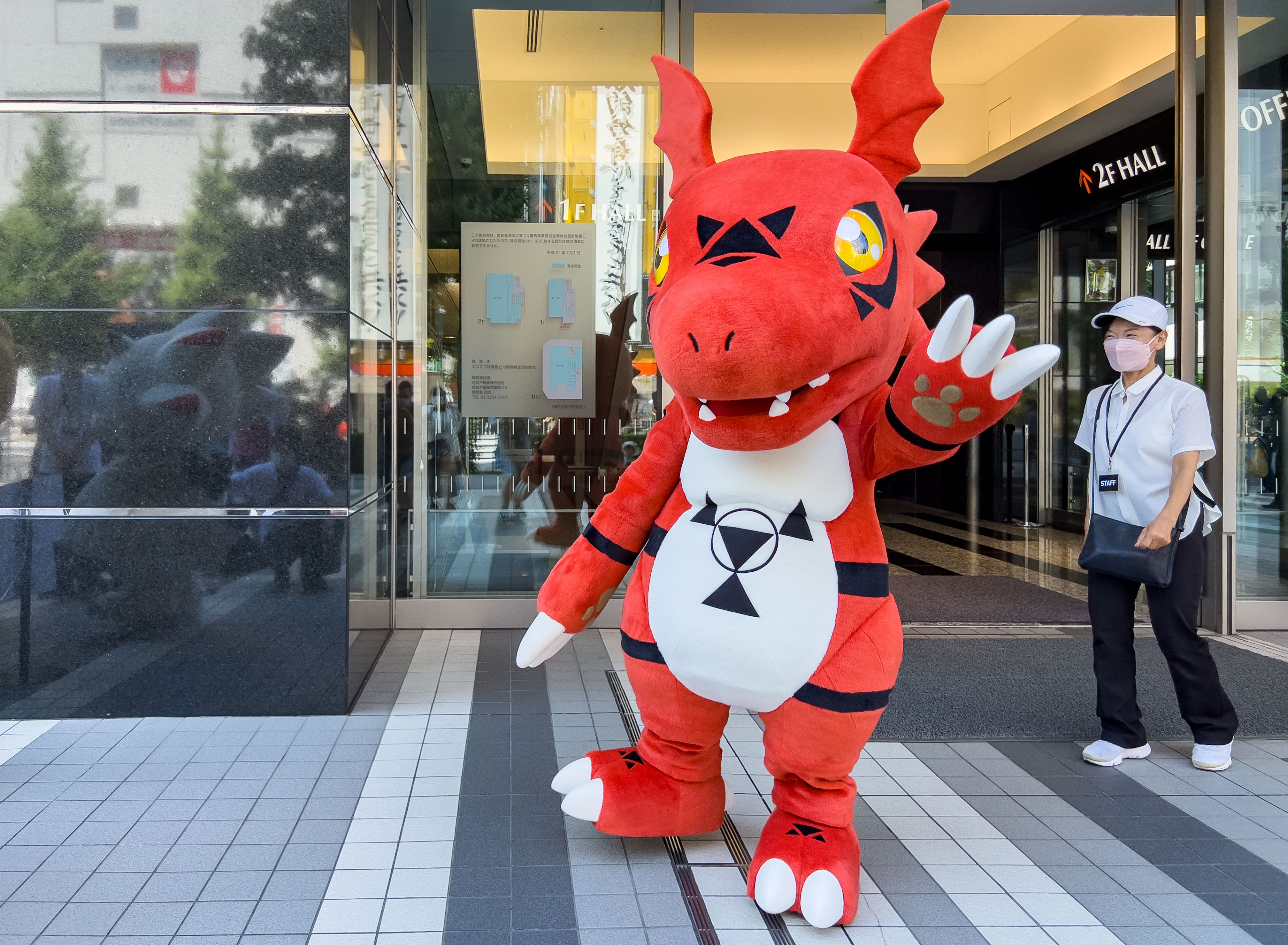 Daryl Harding is a Senior Japan Correspondent for Crunchyroll News. He also runs a YouTube channel about Japan stuff called TheDoctorDazza, tweets at @DoctorDazza, and posts photos of his travels on Instagram. The Digimon Rap was his theme in high school.