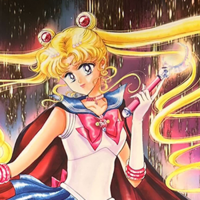 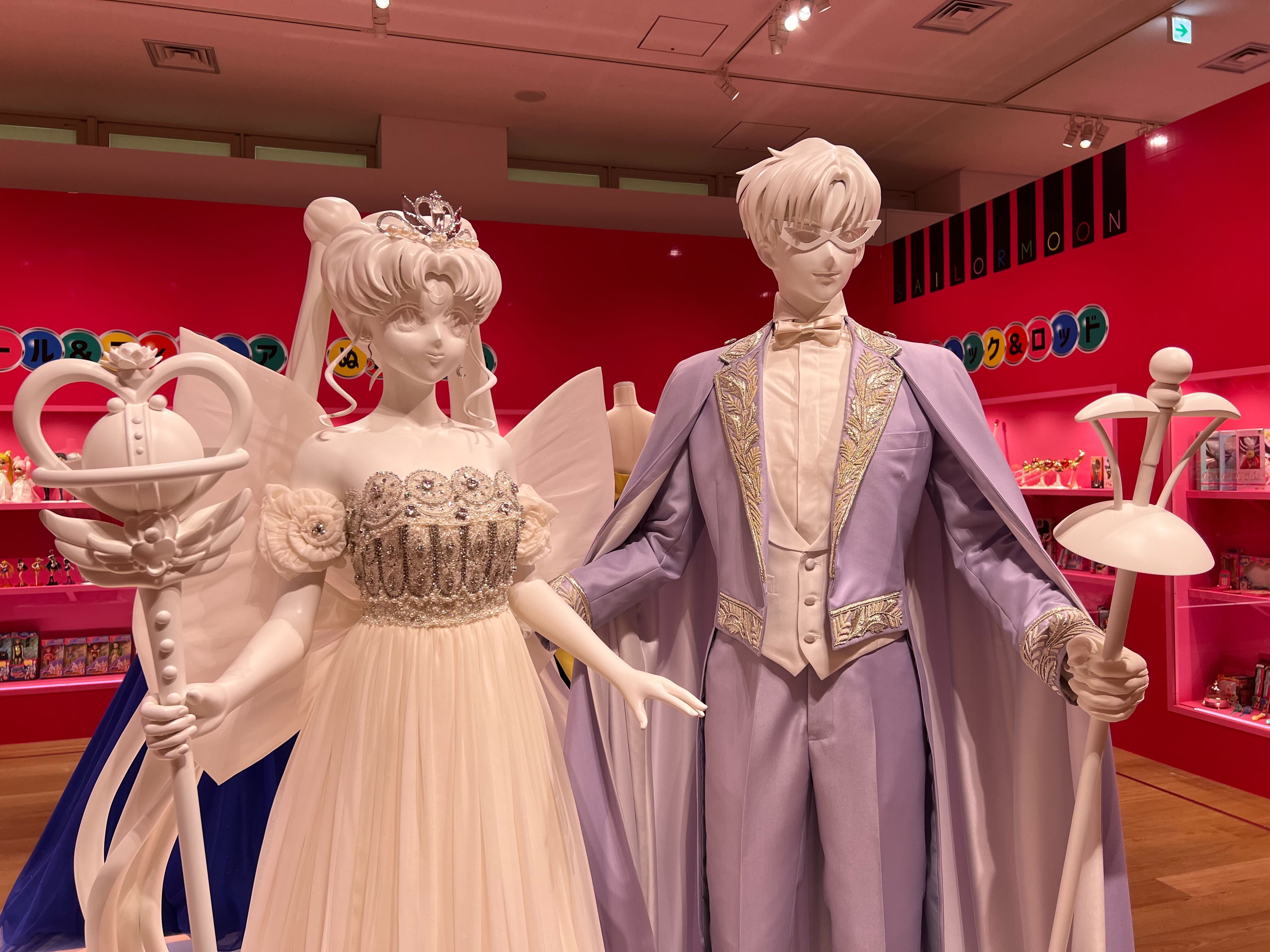 Note: All photos were taken by Alicia Haddick

The Sailor Moon manga by Naoko Takeuchi and the original anime series both recently celebrated their 30th anniversary, with the reach and influence of this defining magical girl series still felt by fans old and new from around the world. Whether you’re someone who fell in love with the original manga or anime, or came in later through the various releases like Sailor Moon Crystal, appreciation for the series remains high. Celebrating this milestone, a new exhibit has opened at the Sony Music Roppongi Museum, marking the franchise’s anniversary in style.

The aim of the exhibit is less about simply remembering the works themselves and more about recapturing the experience of being a fan of this franchise over the last 30 years. What this means is that for all this exhibit does a great job of chronicling the anime and manga over the years and featuring the original work, its one that considers the influence of the franchise and the way it has touched people, including the inevitable waves of merchandise that followed its phenomenal success. 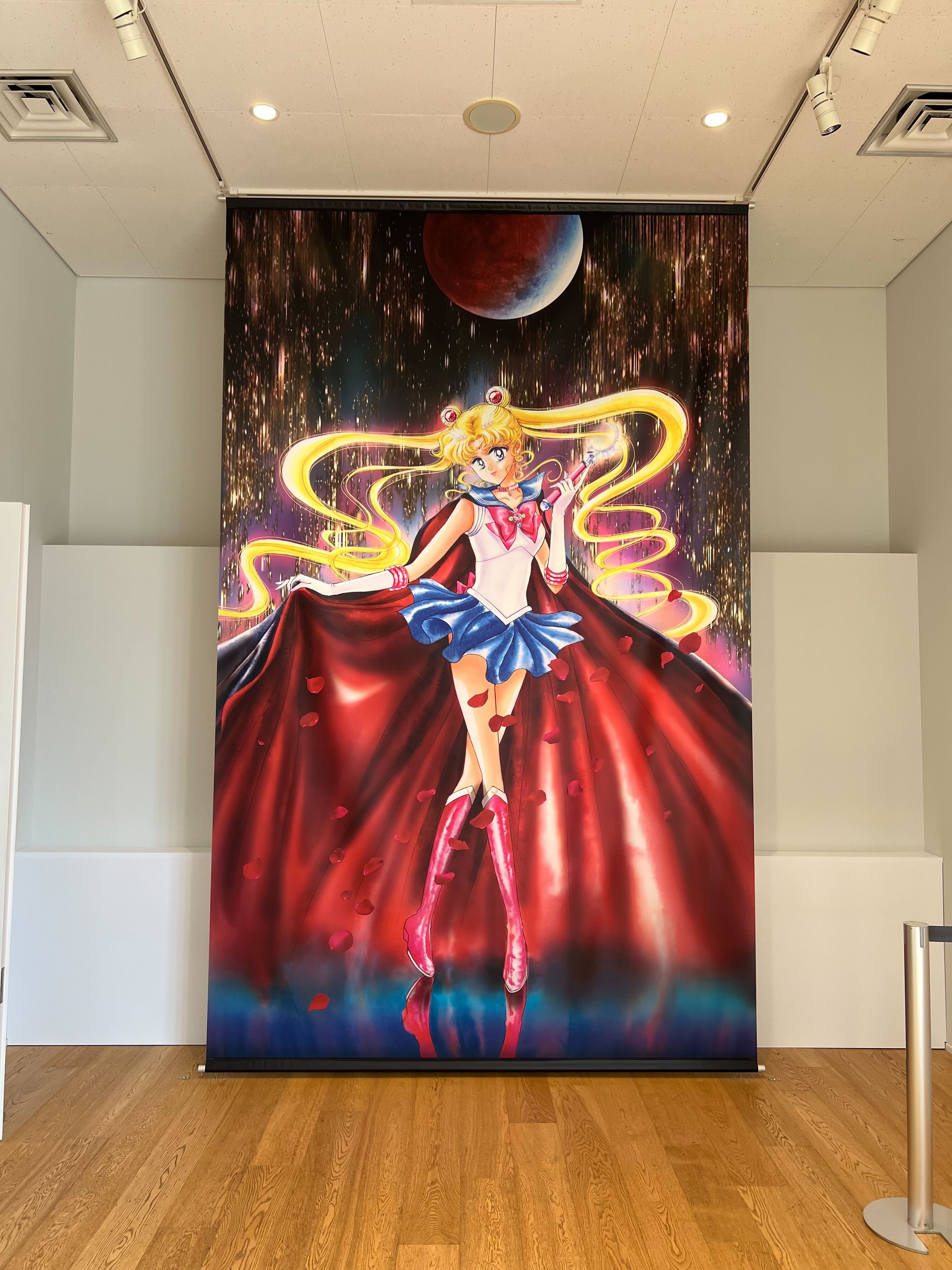 This becomes clear the moment you step foot into the museum. After presenting your ticket and stepping inside, the first thing you see is a giant tapestry featuring the key art for the exhibit. This new art produced exclusively for the exhibit by Naoko Takeuchi features Usagi Tsukino as Sailor Moon in the signature shojo style of the original manga with the moon overhead. 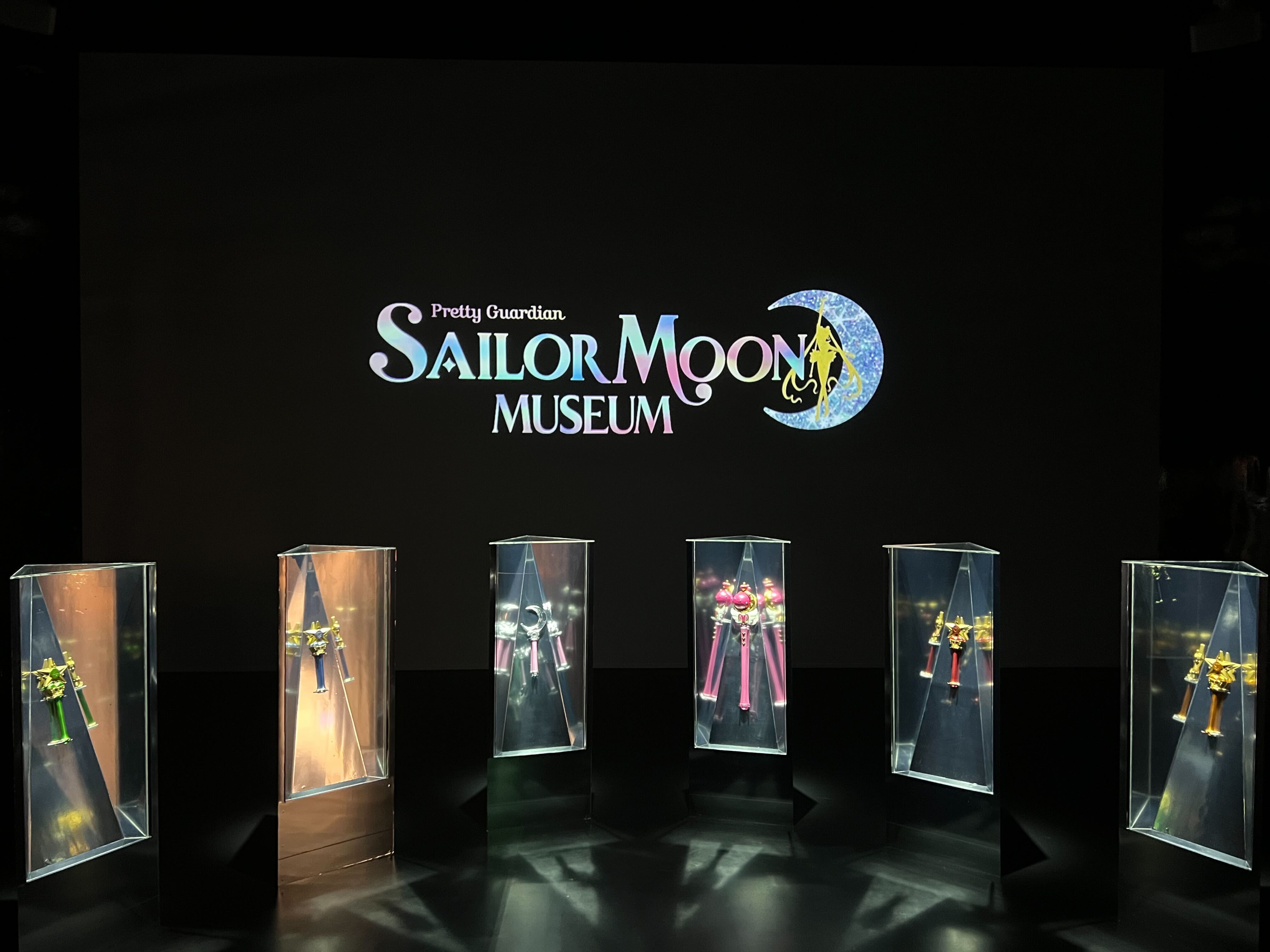 It’s from here where the idea of the exhibit being about the fan experience and the entwining nostalgia and love for the franchise really comes through. Unlike many exhibits, photography was allowed throughout the show apart from in one single room near the end. This first room is unassuming at first, simply featuring replicas of the wands used by the five main Sailor Scouts in an otherwise blank room. Once the staff has allowed for ample time for photos the true excitement begins.

The room transforms into a stage, with one wall adorned with a large projection of the original anime opening theme as lights inside the wall are projected outwards to give the sense that you’re actually inside the opening itself. It’s a rather impressive effect that really brings you out of the outside world and into the one created by Takeuchi. 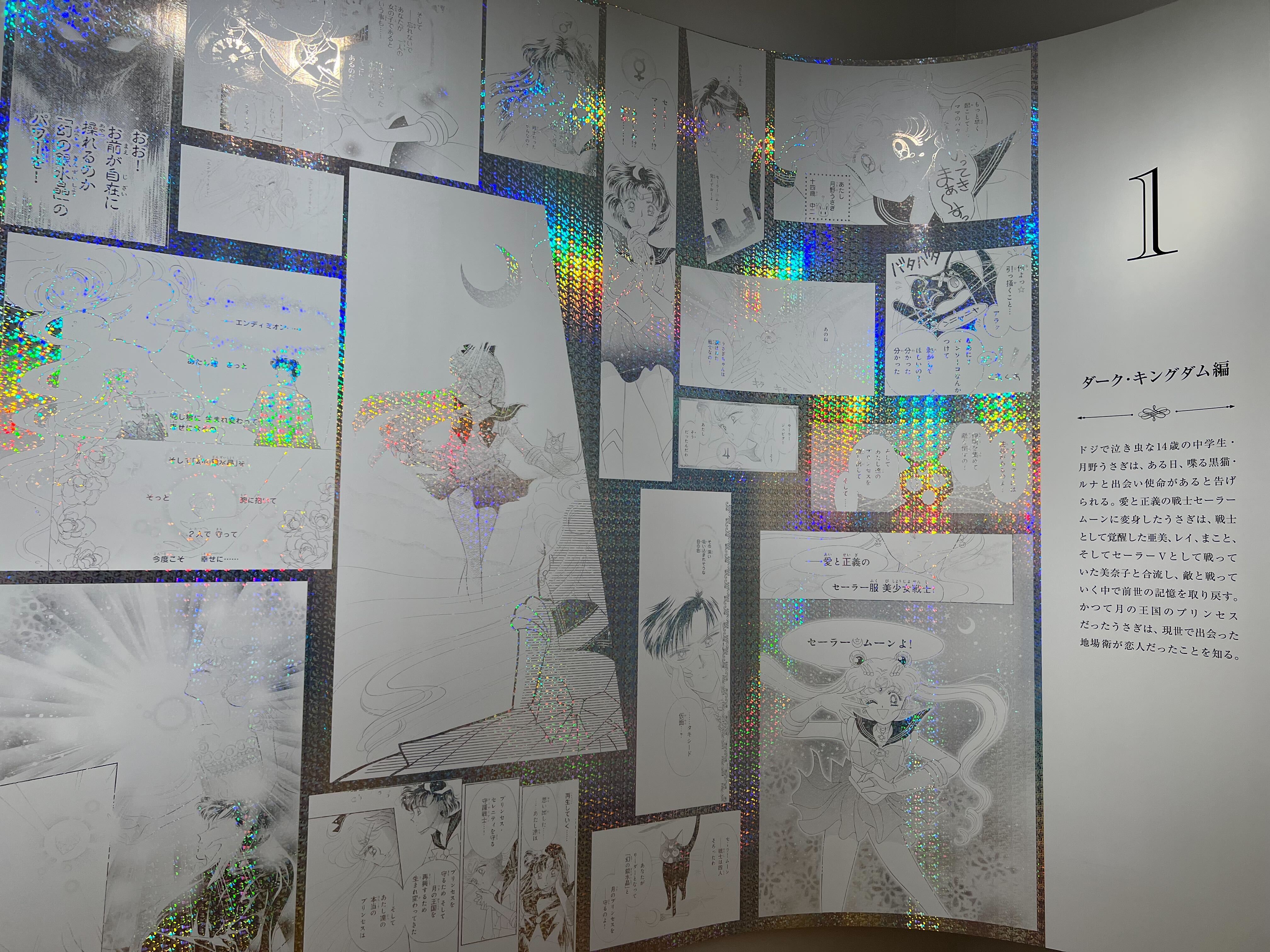 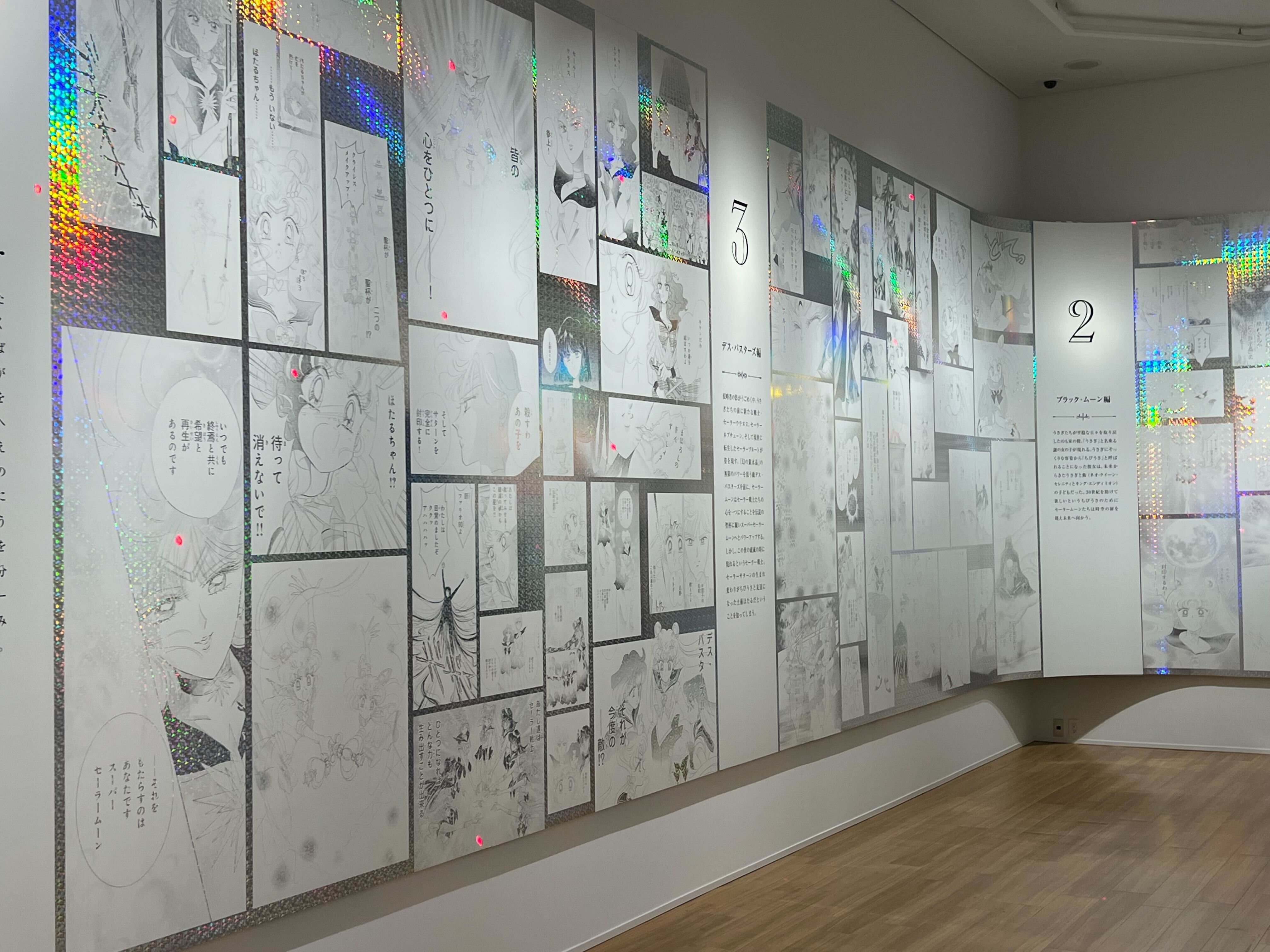 The next rooms exist to summarize the original anime and manga, featuring iconic panels and screenshots from both the comic and its TV and theatrical adaptations from the very beginning all the way to the planned release of new movies in the Sailor Moon Crystal franchise next year adapting the final arc. 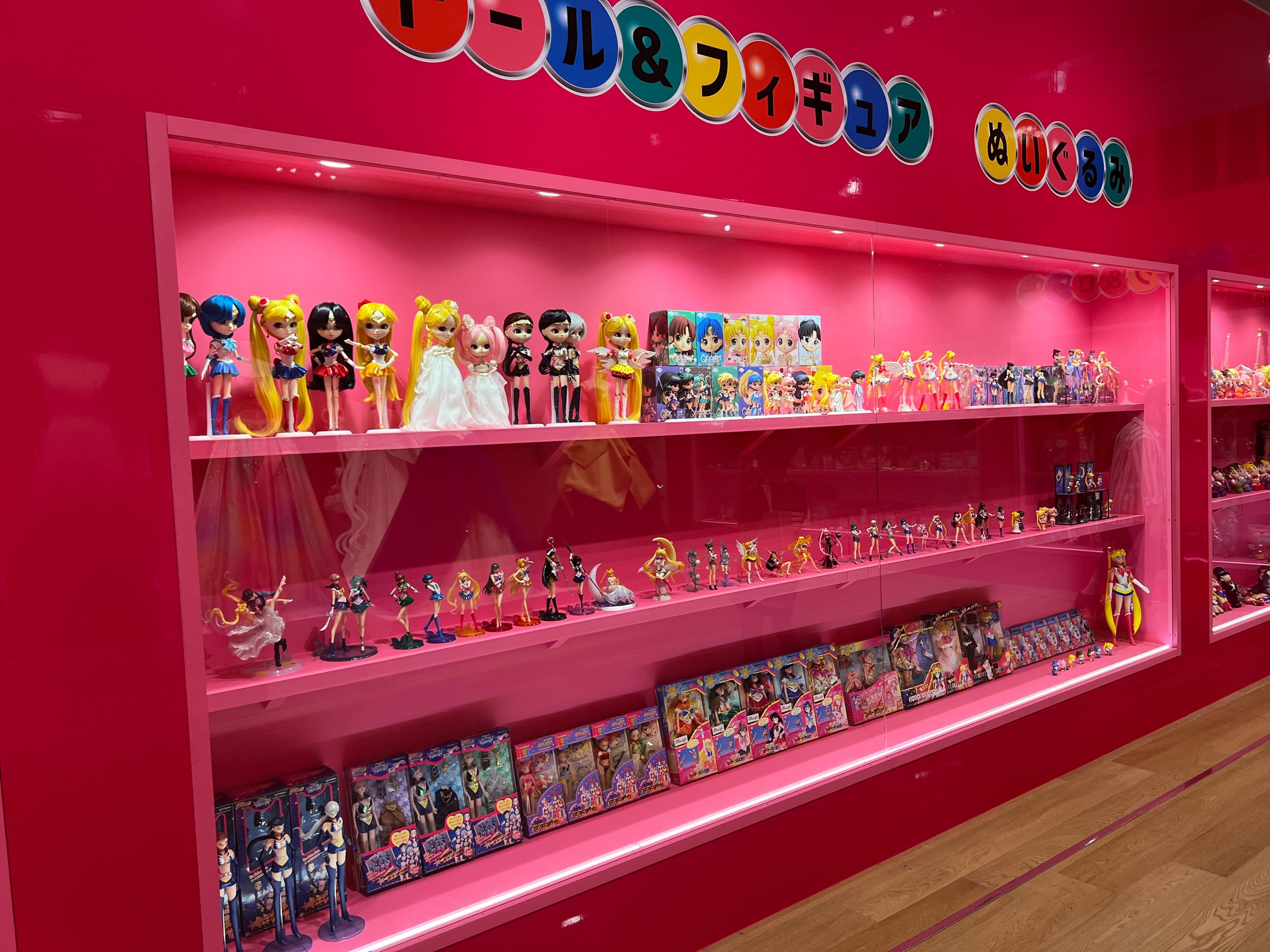 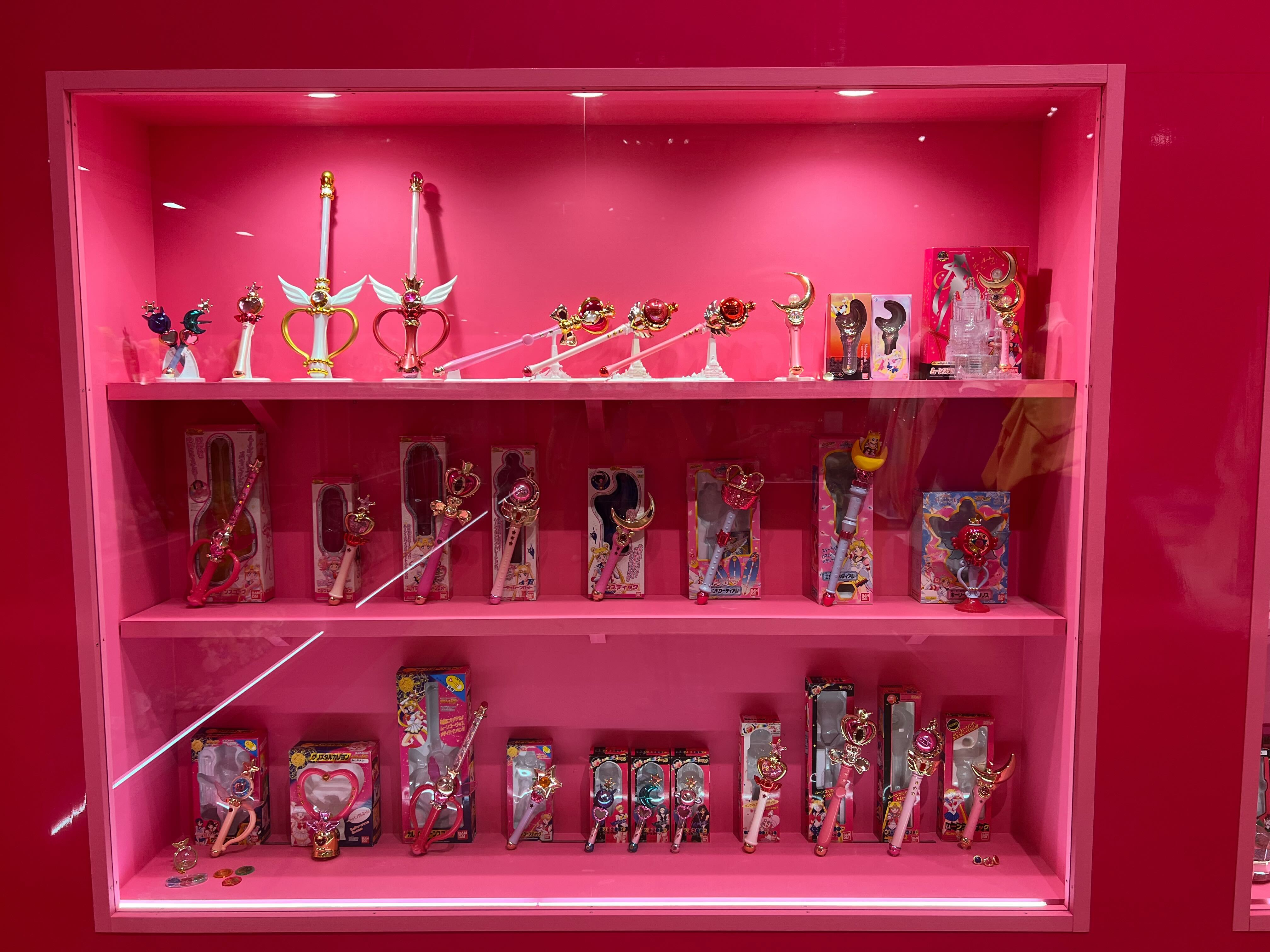 It’s from here that the interest in memorializing the series is deprioritized for a memorial to the experience of living with it. The next room is dedicated to the vast array of merchandise and figures produced for the series over the years. Everything you could think of is here including some rarities that have been highly sought after by collectors over the years. 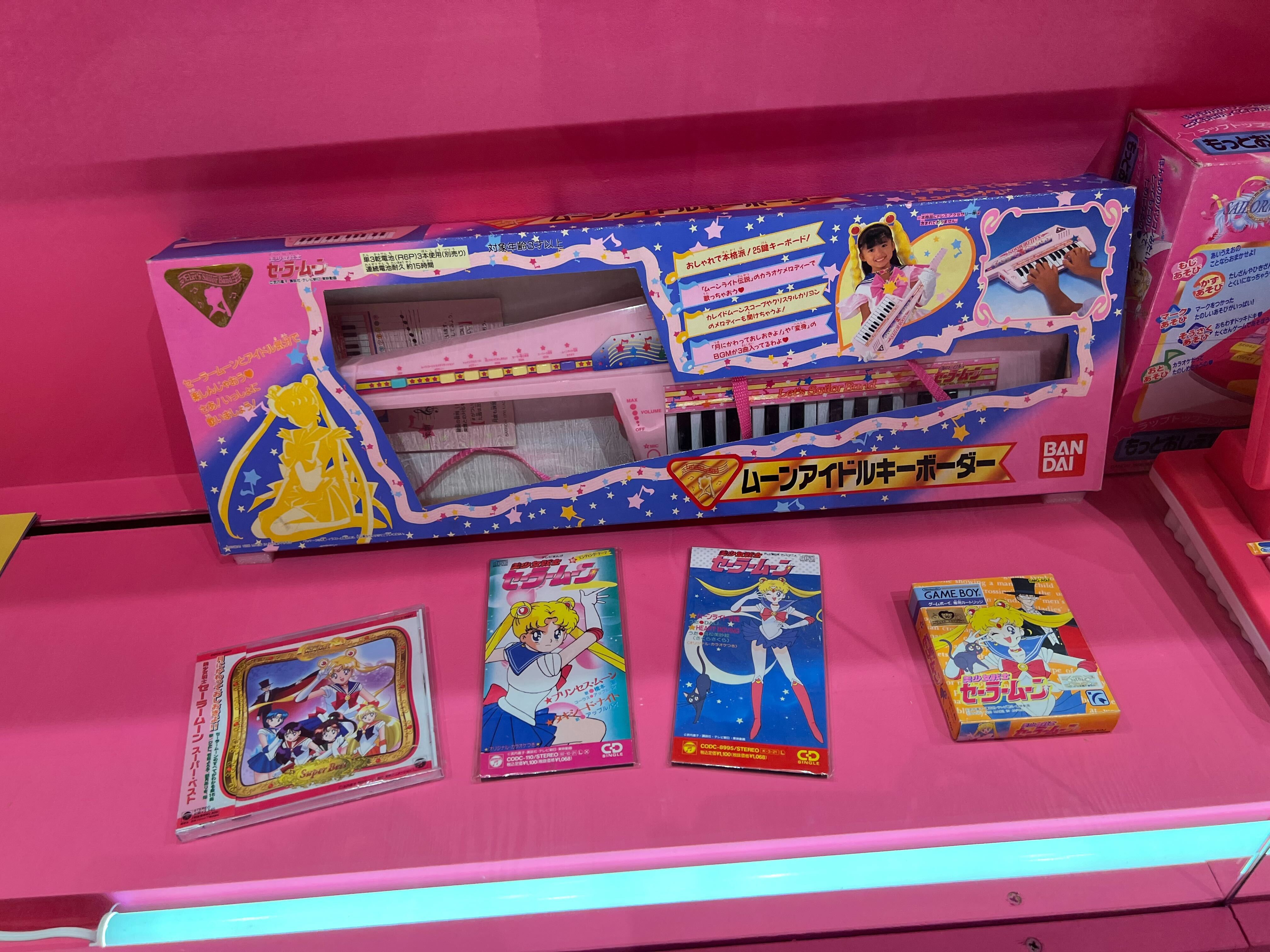 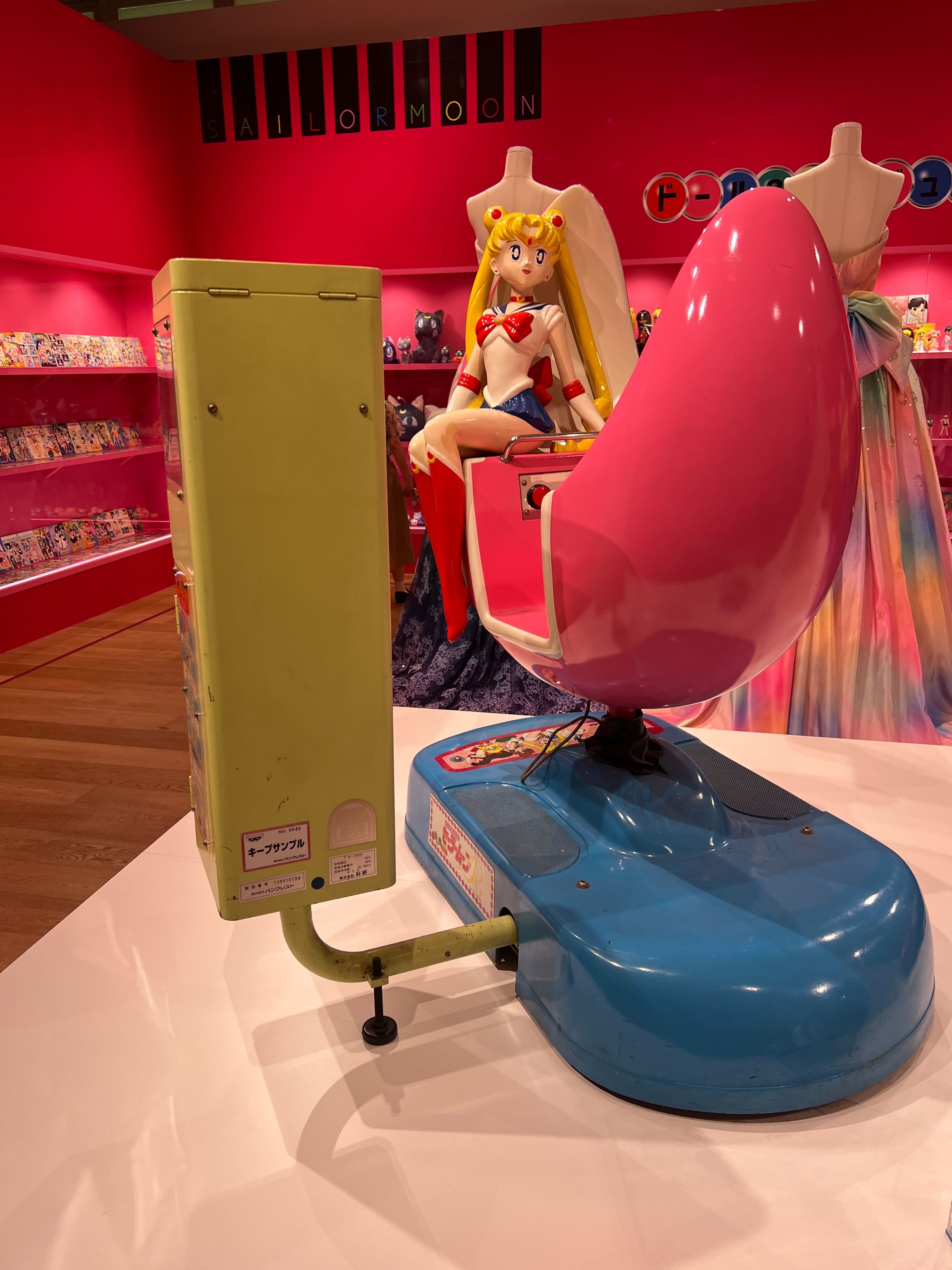 In the center of the room besides costumes for Sailor Moon, Tuxedo Mask and the Sailor Scouts is a shopping center ride-on coin-operated machine, and in glass containers around the room was everything from kids toys to expensive jewelry. Stuff you knew existed like kid-friendly plastic wands and an entire glass container dedicated to plushies and dolls were obviously there, but did you know you could also get a Sailor Moon kids-sized keytar? To say the room was comprehensive would be an understatement. 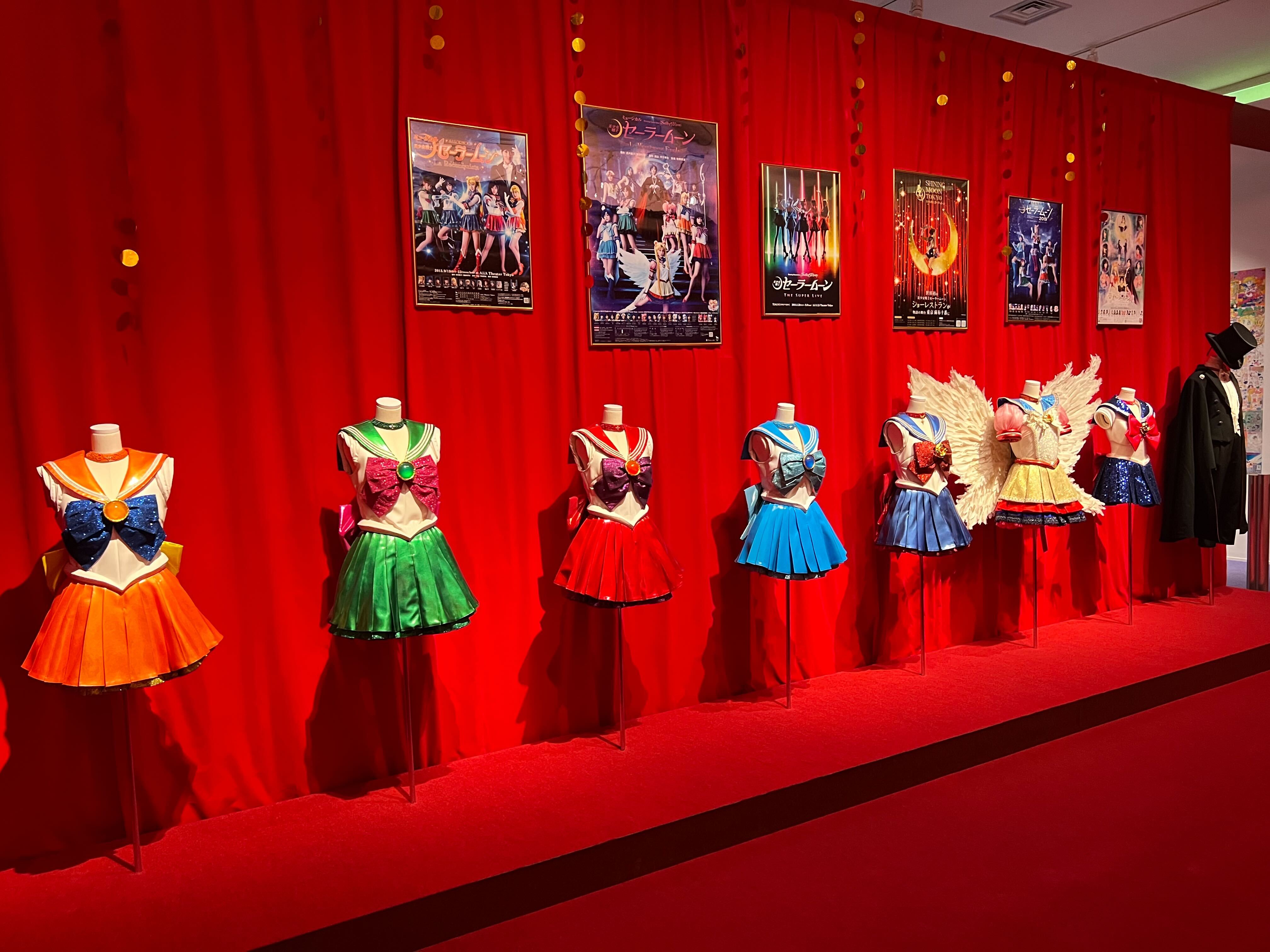 From here the next room was dedicated to the various stage shows produced for the franchise. Alongside posters and pamphlets were the original costumes worn by the performers for these shows. Some of them show slight wear, likely from the time they were used for the strenuous performances the actors undertook in these roles, but the age of these outfits makes their current condition impressive to behold. 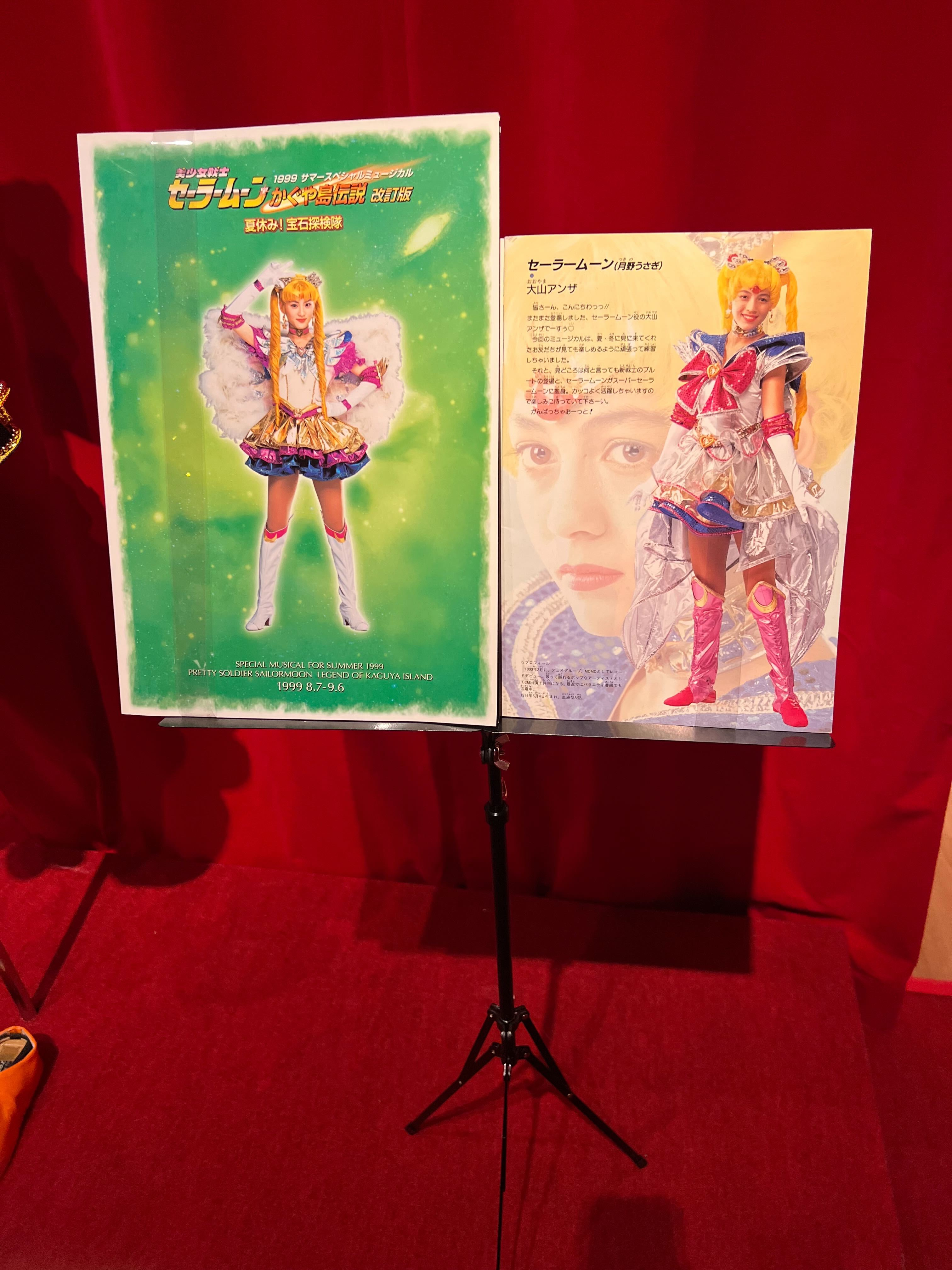 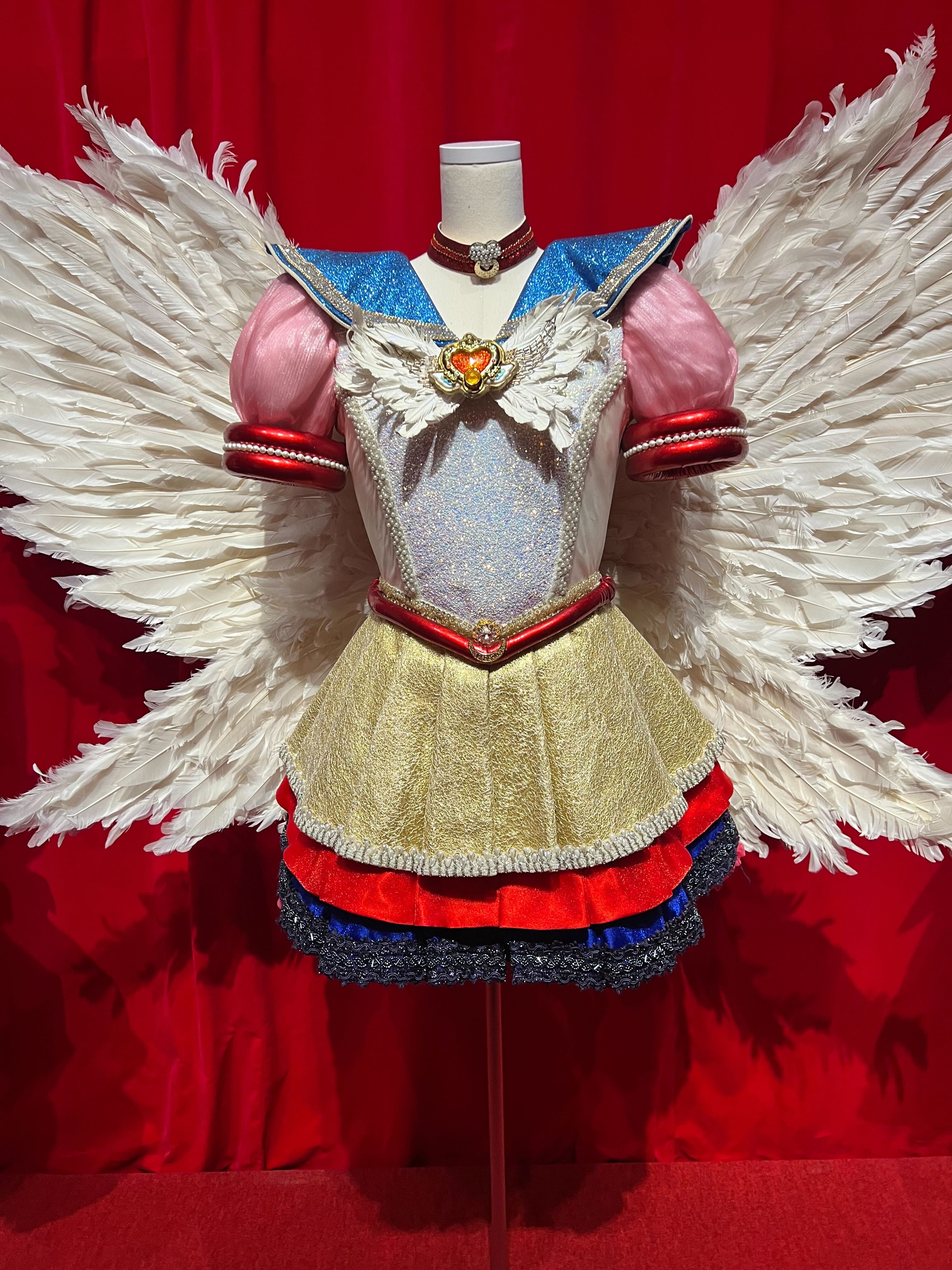 After a giant mural of various magazine promos came one of the most impressive (and unfortunately impossible-to-document) rooms in the exhibit: This room was dedicated to original artwork produced for color pages and promotional campaigns made by Naoko Takeuchi starring the characters from the series.

Unlike the rest of the exhibit, this room is designed to be different upon each visit. While the exhibit is planned to run until the end of 2022, the art shown in this room will rotate throughout its run. At the time of our visit in July, the artwork shown in this room was dedicated to the first two arcs of the series, with this set to rotate to artwork from the third and fourth arc from September 10th. From November 12th until the exhibit closes on December 30th, artwork from the fifth and final arc will be displayed. 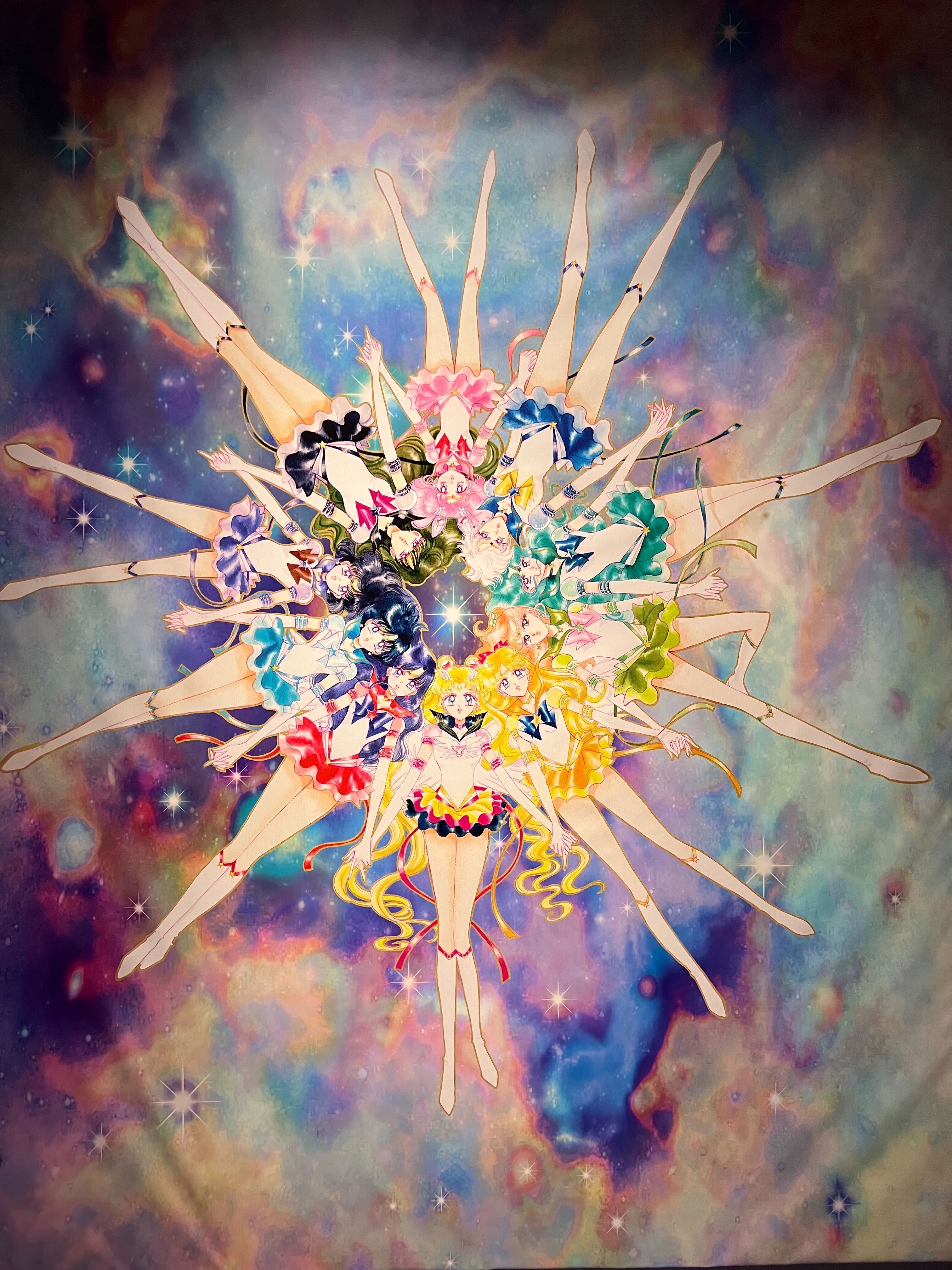 It’s always a joy to gawk at the artwork of talented creators such as Takeuchi, as it’s possible to glean knowledge from the work that went into them. Since these were the original prints you could see every pencil stroke on these designs, and many were even dated to give an indication on when they were completed before publication. Most color pages were completed roughly six weeks before being first shown to the public, an impressive buffer for such detailed linework.

The final room mostly served as a capping point for the exhibit celebrating the work on display, with large canvas prints on display featuring all the characters. There was even a giant original piece of artwork signed by Takeuchi herself the day before the exhibit opened from her own visit to the event thanking fans for coming. 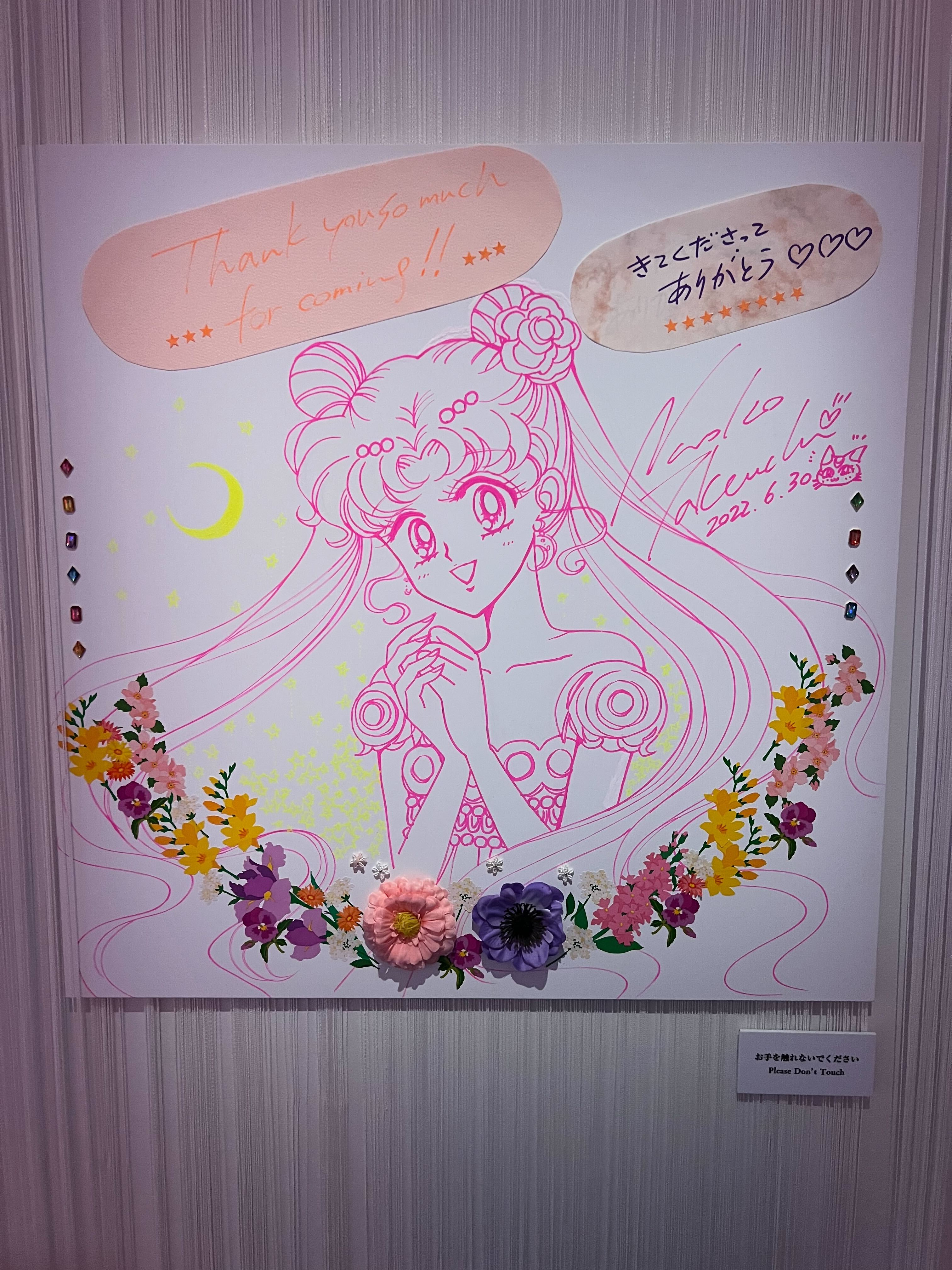 Still, the end of the exhibit was far from the end for the experience. A themed cafe greeted fans at the exit offering takeout and eat-in food themed on the franchise. This ranged from simple latte art of manga panels to omurice and a flurry of desserts. For a series like this the sheer number of desserts, cookies and even bubble tea on offer shouldn’t be surprising.

So of course we went in to sample the offerings! Having a rather sweet tooth myself, I opted for a Sailor Chibi Moon Pudding a la Mode and Sailor Mars and Sailor Venus Soda Float. With parfait and pudding plates also on the menu it was a difficult choice, but definitely the right one. The Pudding a la Mode was created in the pink cutesy aesthetics of the character which inspired it, complete with a bow on the front. The creme caramel in the center with pink cream, ice cream, fruit and wafer were rivaling the sweetness of the character themselves. A very tasty option. 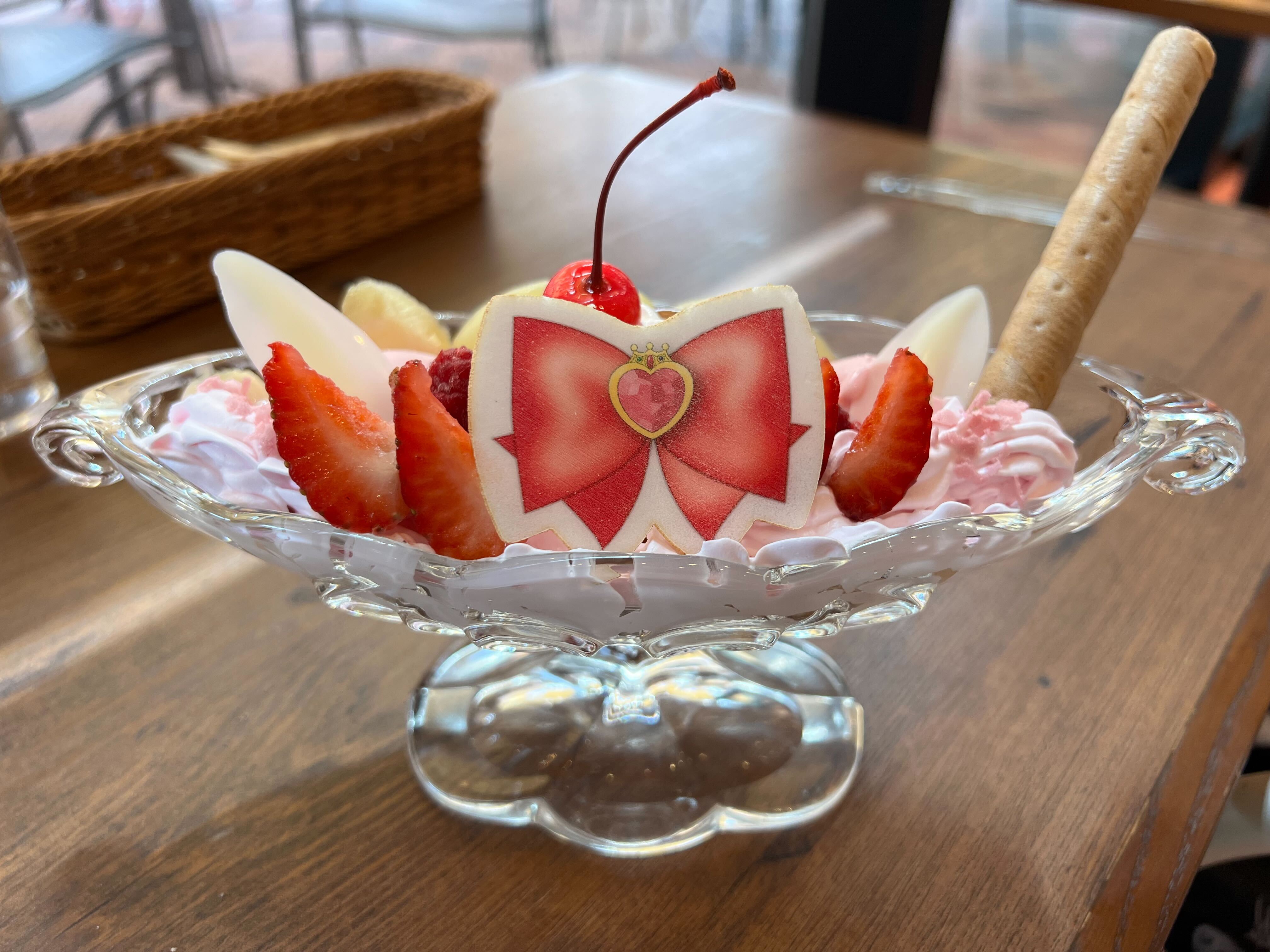 The soda float was also a nice option to wash it all down. With the bubble tea being a takeout-only option it was the next best bet, but the fruity soda with whipped cream hit just the right spot to both refresh and relax after the exhibit. 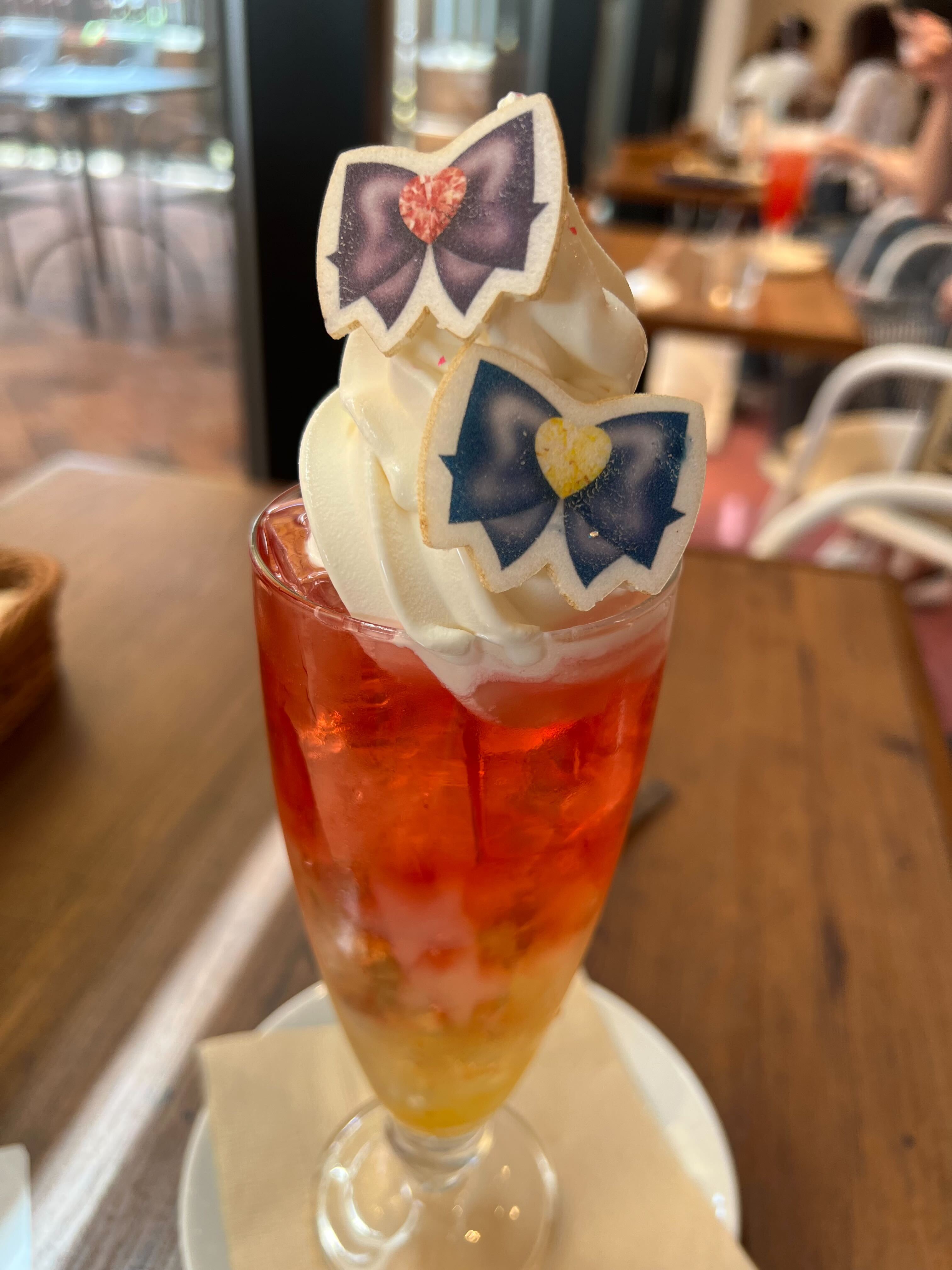 For fans of Sailor Moon, this is a great exhibit worth visiting. Rather than capturing the series itself the decision to capture the fan experience is one that’s undoubtedly gonna recall feelings of nostalgia for those who visit. I overheard some Japanese fans visiting recall their experiences riding the coin-operated mall ride when they were kids, and others remembering their love of the theatrical shows as they witnessed the costumes up close. For how much the passion of these fans has kept the franchise going for all these years, it’s a fitting way to mark 30 years of Sailor Moon. Here’s to another 30! 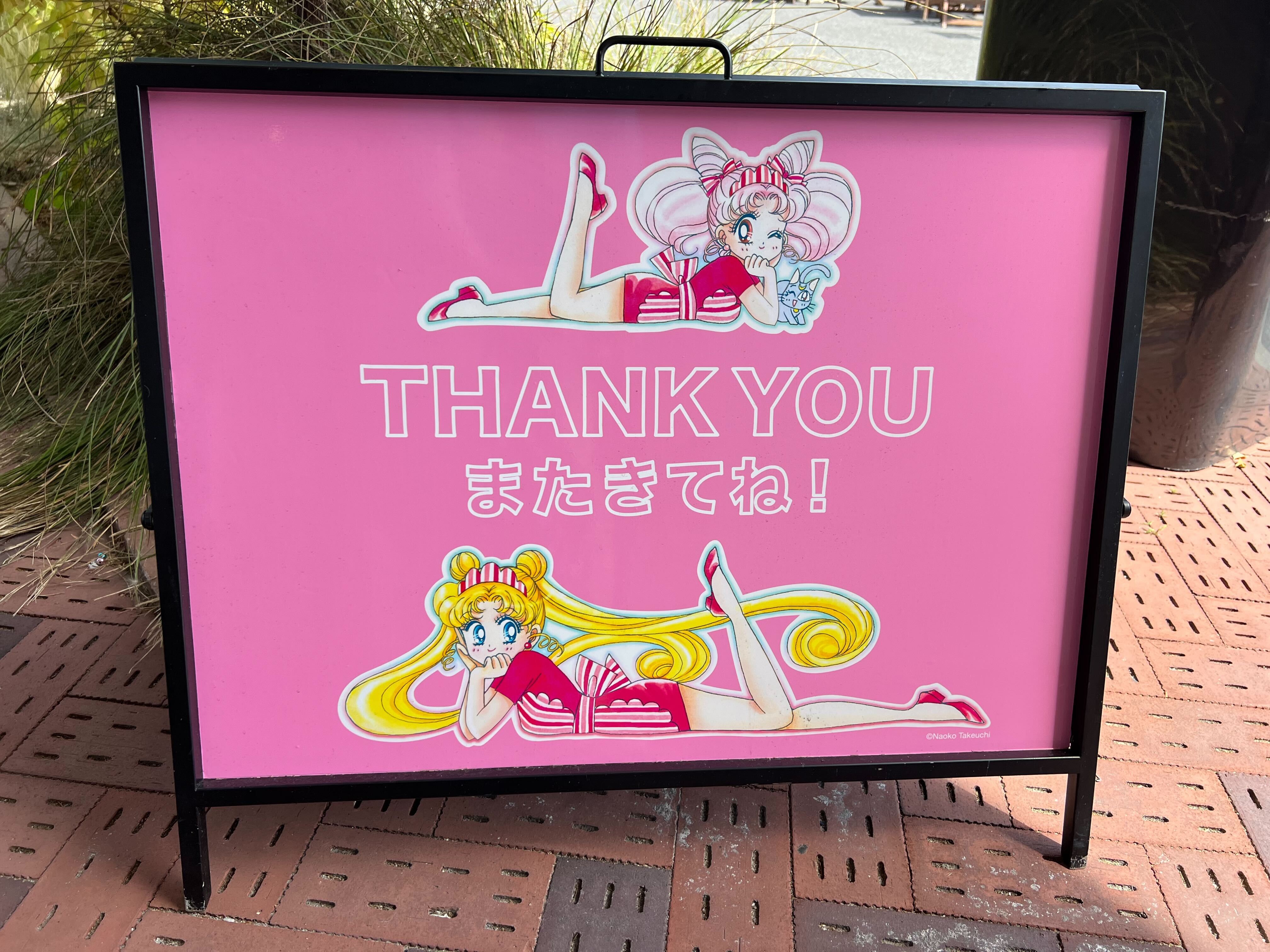 For those in Japan, the Sailor Moon Museum event is running at the Sony Music Roppongi Museum until December 30th, with brief closures as contents are updated between volumes in the original artwork room occurring in September and November. You can find out more about the exhibit and book tickets over on the official website.